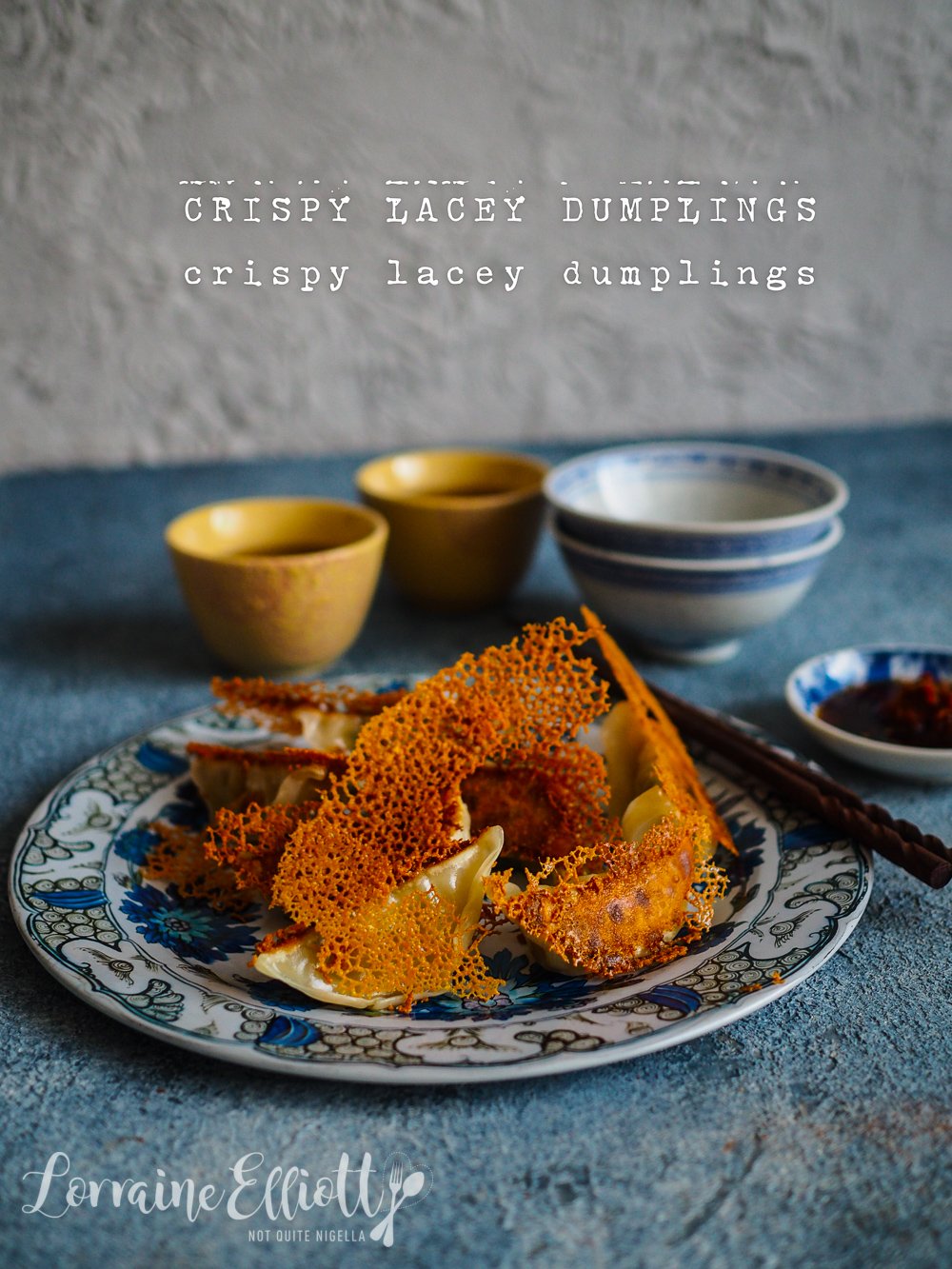 Ever wanted to know how to make that lacey, crispy base for dumplings? You won't believe how simple it is! And all you need is three ingredients - serving up delicious crispy bottomed lacey dumplings is a cinch!

I always assumed that you needed some sort of special equipment to get that lace edge to dumpling bottoms but all you need is a non-stick frypan with a lid, water or stock, cornflour and oil. That's it!

You can do this with most frozen dumplings although it works best with gyoza and ones that have a flat surface to them. Ever since I made this we haven't actually gone out for dumplings and I've started hoarding big bags of dumplings in the freezer for a quick and tasty dinner. Mr NQN can polish off around 24 dumplings in one go (I know, seriously!) and he could probably eat more but I don't want to see that happen. He is rather proud of himself smiling at the money saved from going out for dumplings. 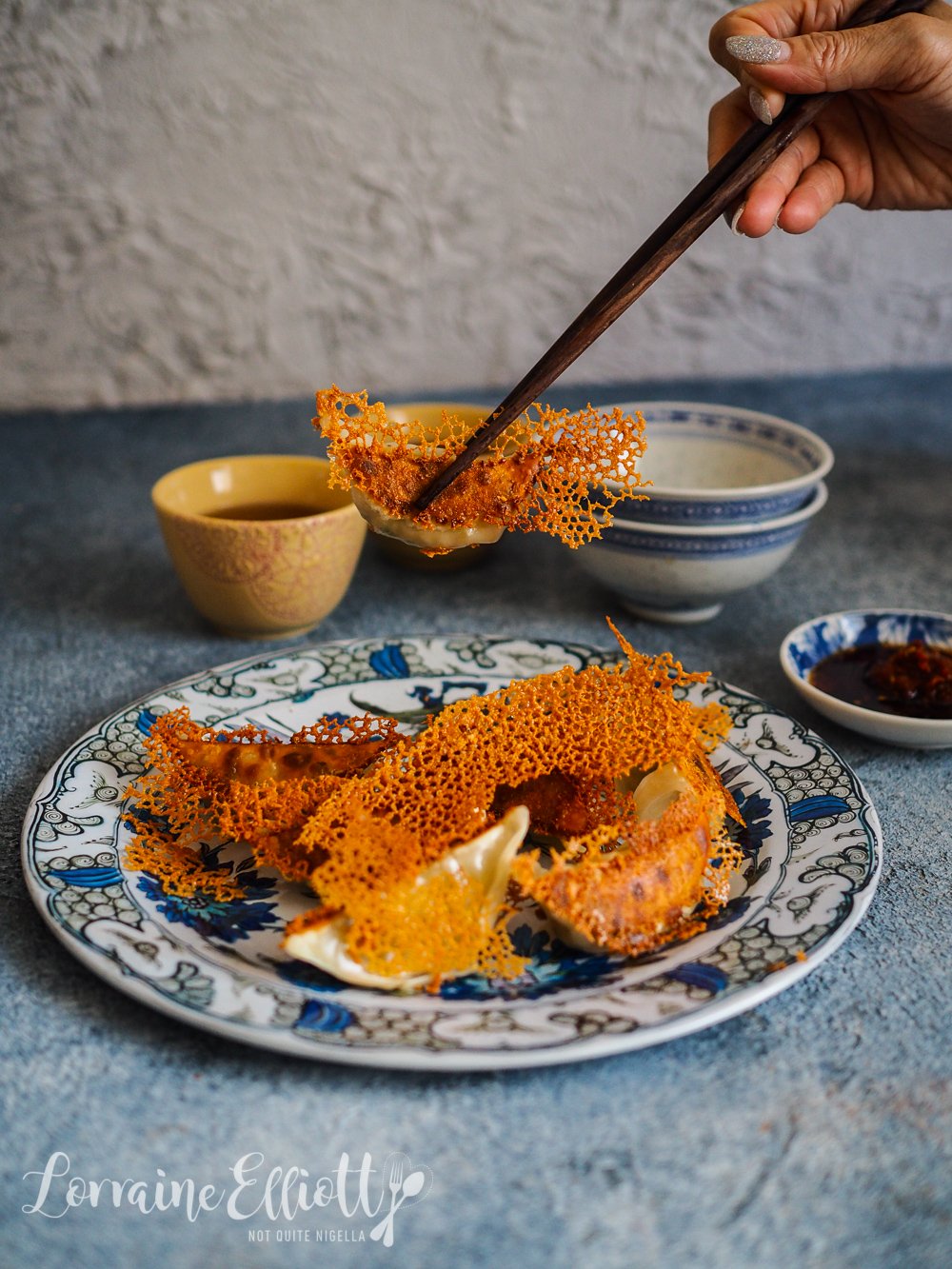 I have to say that Mr NQN is quite good at saving and has helped me curb my extravagant spending habits over the years. A friend of mine (who has asked me to not mention her name ;) ) was telling me about her money saving husband. "I used to call him a Tyrannosaurus because his arms were too short to reach his pockets to pay. Seriously the man is CHEAP." She gave me an example. "He made his own futon with old sweatshirt scraps and no sewing machine. He was very proud of it. It was... bumpy."

Her husband was also a hoarder when they first met, "He lived with his brother and it was the saddest bachelor place ever. No couch, no lamps, just sad bedrooms and white walls. He's a hoarder. Piles. Just piles of everything. Every receipt."

I described to her the state of Mr NQN's bedroom when I met him which was so incredibly insane and even now I think I dreamt it up. Mr NQN is also a hoarder and it is an ongoing battle with him as I'm as a giver/thrower. His room was full of boxes covered in junk mail, opened letters and junk piled up over a metre high and somehow a bed inside there with a desk with a computer. She said, "Thank god they found us!". Mr NQN surprisingly agreed. However he did have a mouthful of dumpling at the time and that may have played a part in his answer!

So tell me Dear Reader, are you a good saver? And do you have a hoarder in your family? And how many dumplings can you eat in one go? 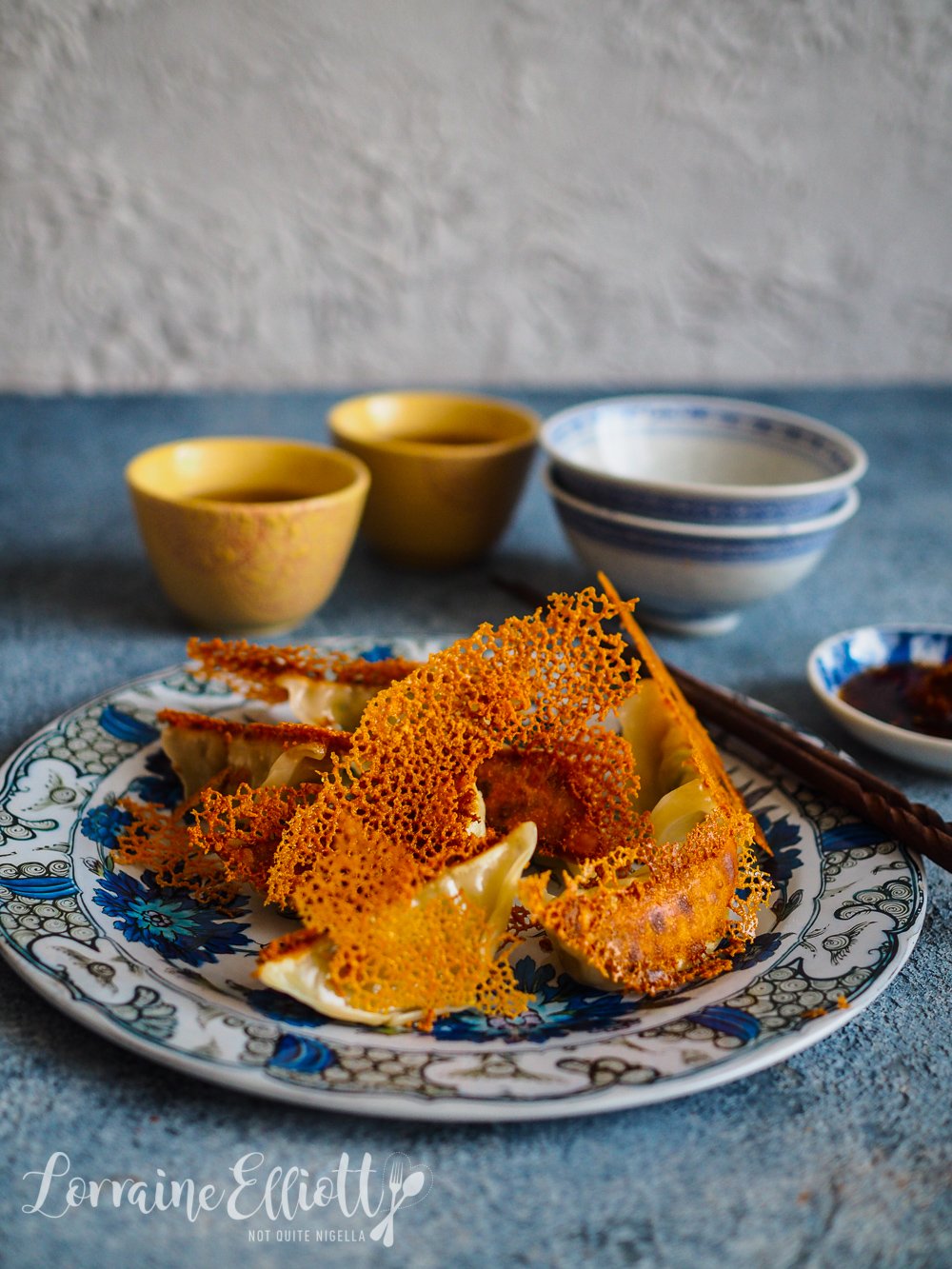 Step 1 - Heat a frypan on medium high heat. While it is heating up, in a small measuring jug or cup whisk the water or stock, cornflour and 1 tablespoon of oil together to form a slurry. 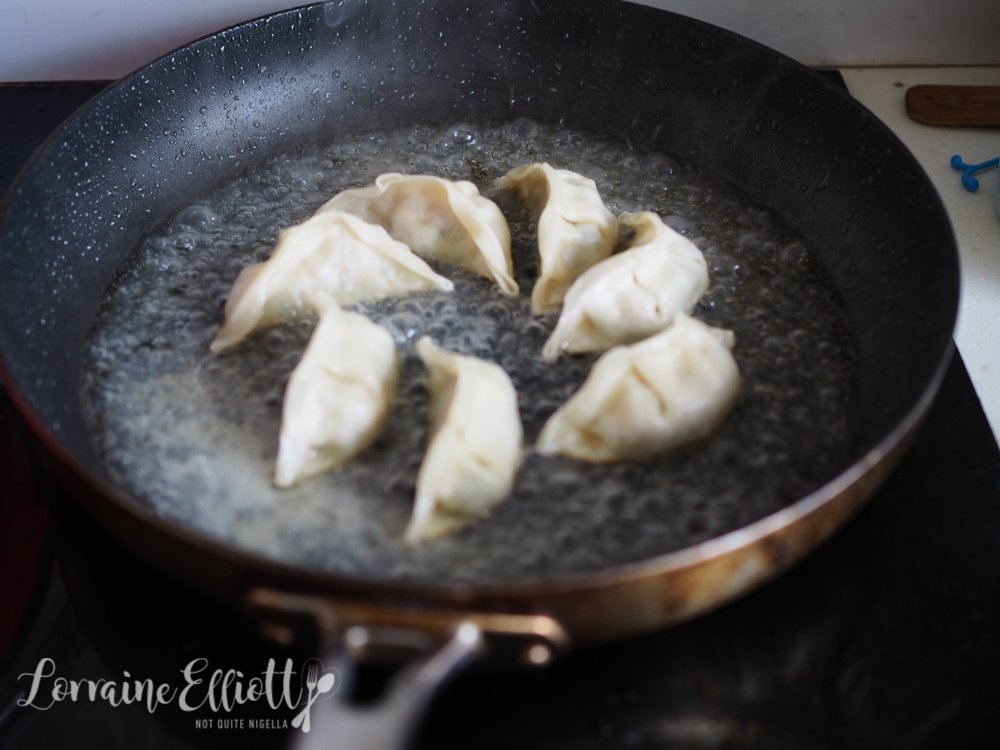 Step 2 - Once hot add the remaining 2 tablespoons of oil to the pan and place the dumplings flat side down and cook for 1 minute. Carefully pour 3/4 of the slurry mix (it will spit so take care) and place a lid on top and allow to cook for 3 minutes. Remove the lid and use the remaining 1/4 of the slurry mix to fill any gaps. Then remove the lid and you'll see the lace pattern start to form. 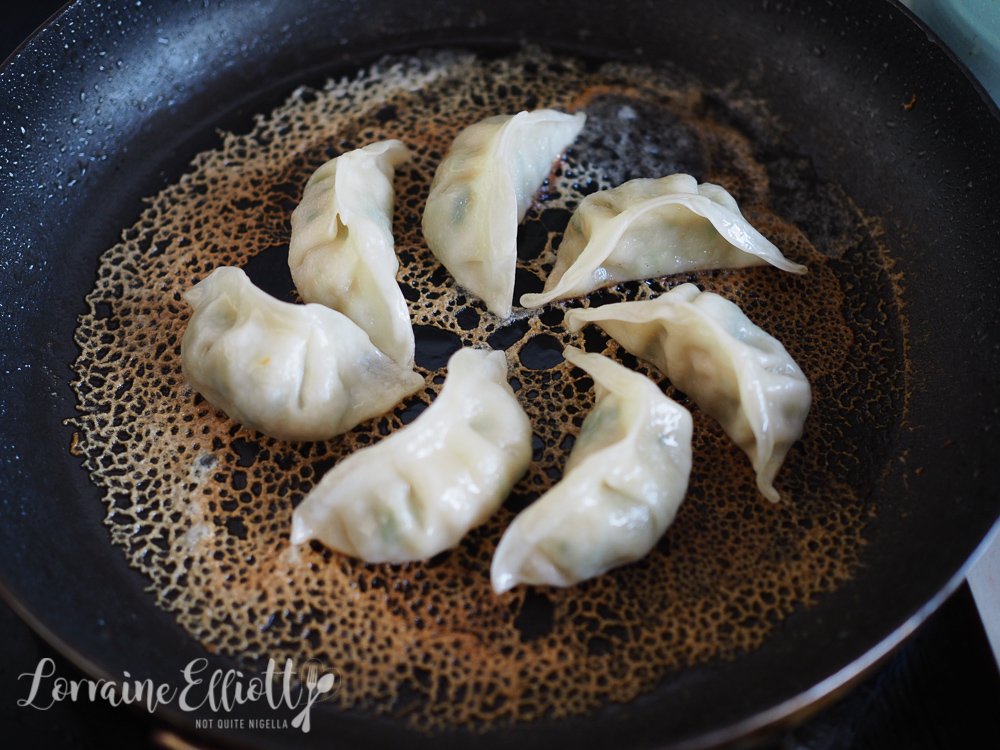 Step 3 - Use a turner and place the dumplings on a plate. Advanced manoeuvre: place a plate on top of the frypan and carefully upend it (be careful, the oil is hot!). 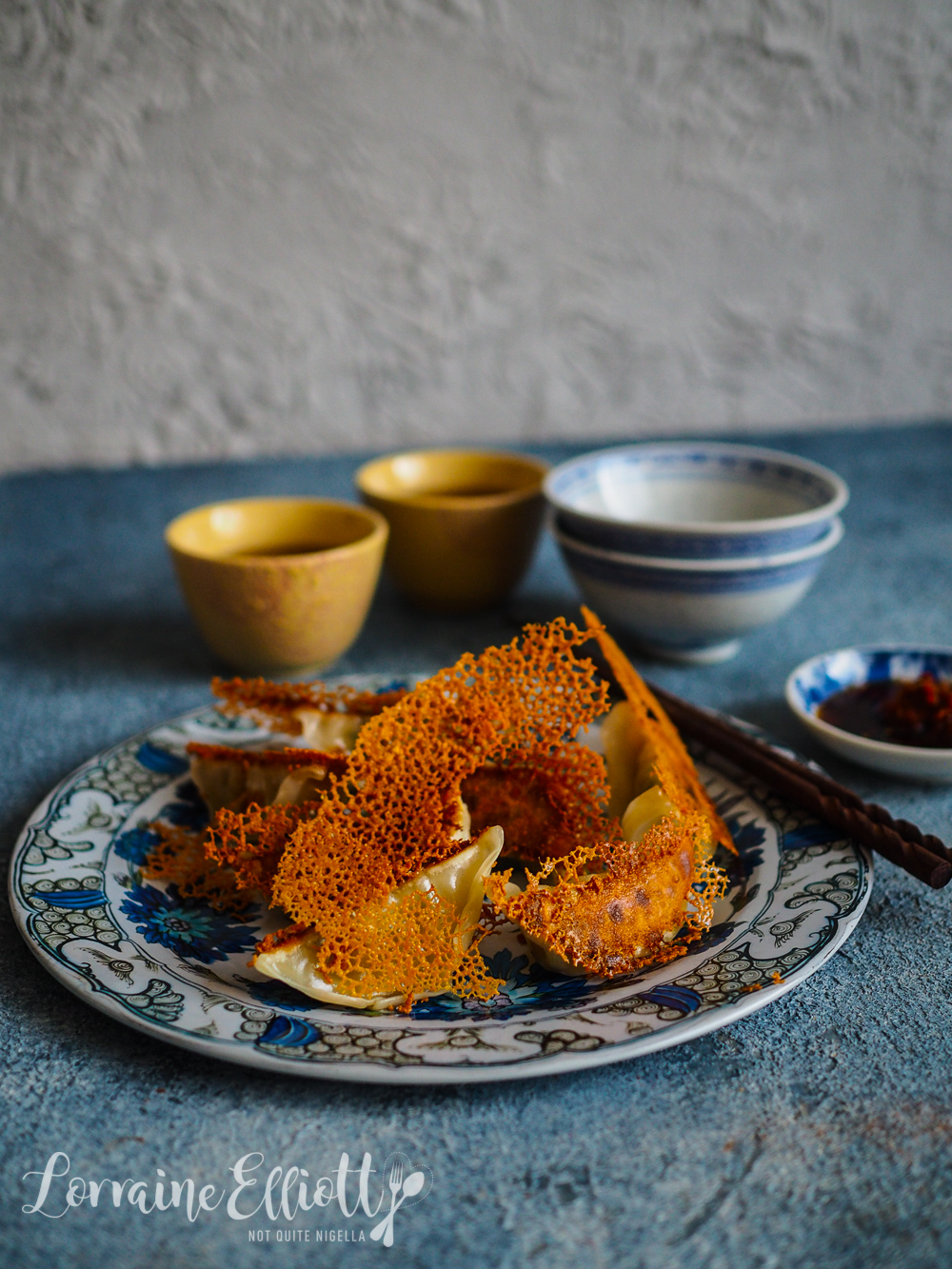