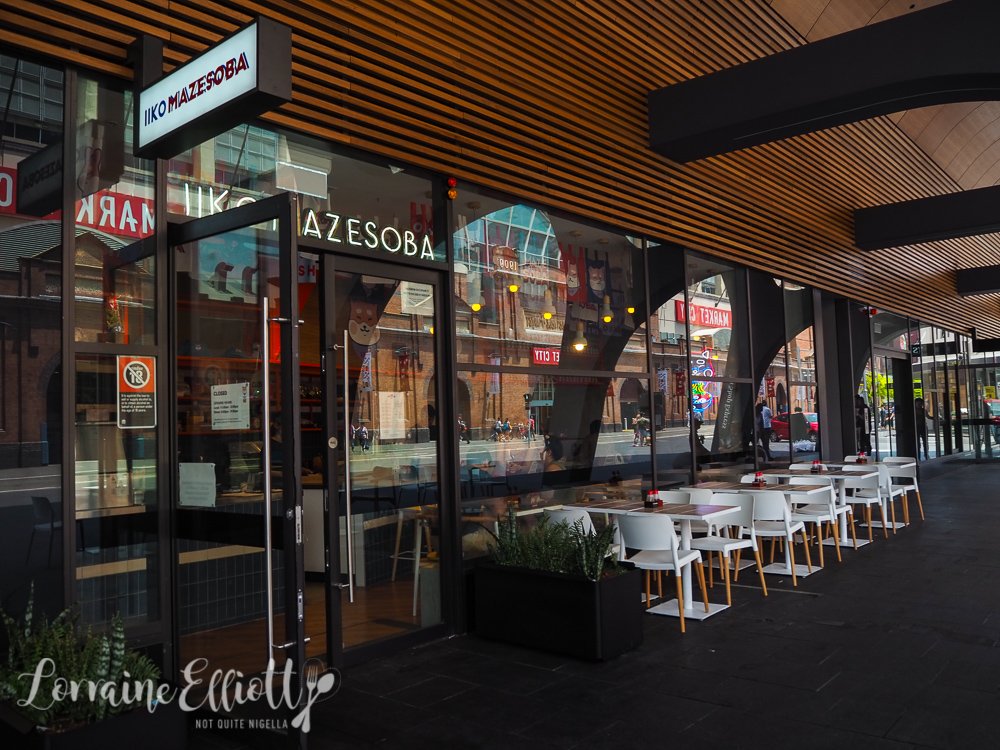 Iiko Mazesoba is a new eatery that specialises in mazesoba, a soup-less noodle dish where you mix all of the ingredients together in a bowl. There's a eight strong mazesoba menu as well as sides and an adorable dog mascot and merchandise. 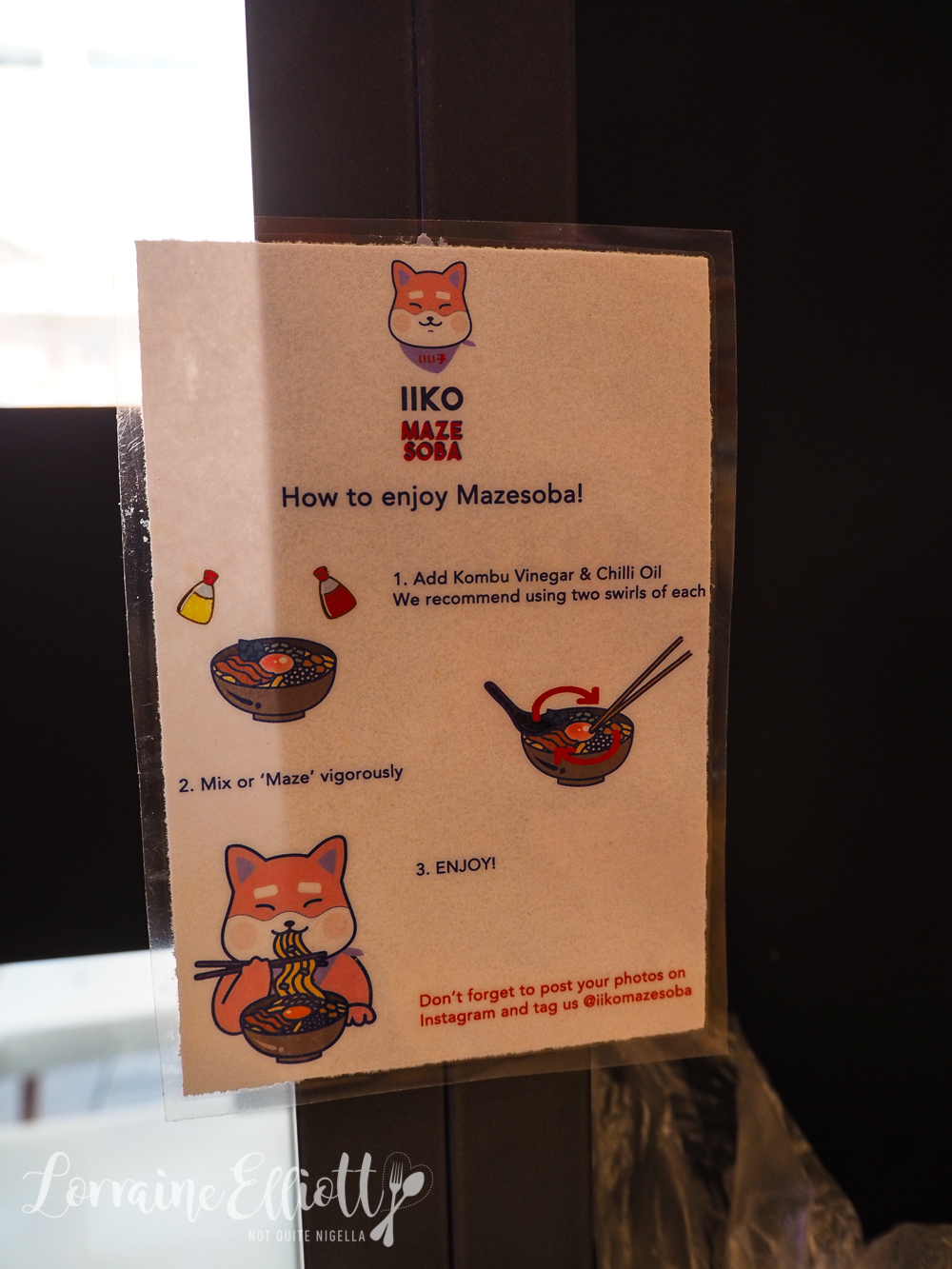 But first a bit of background. What is Mazesoba? Mazesoba originated at Menya Hanabi, a ramen shop in Nagoya, Aichi Prefecture. Also dubbed "Taiwan Ramen" it's a dry noodle dish made with pork lard and soy sauce with an onsen or raw egg on top that you mix to dress the noodles. 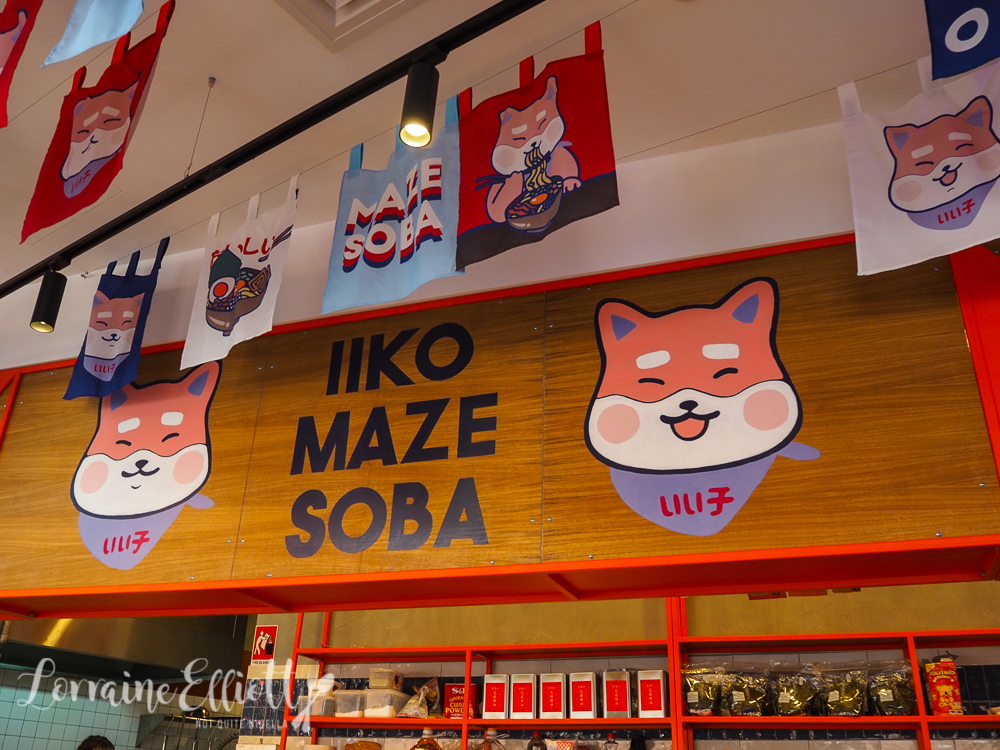 "Where is it?" messages Monica to me. IIKO Mazesoba is located on the south east section of Darling Square along the outside facing Paddy's Markets. Developed by Michelle Widjaja it got its first boost via Kickstarter where they raised AU$ 6,933 exceeding their $5,000 goal and they sold merchandise bearing the restaurant's mascot Flynn the Shiba Inu whose face adorns the tshirts, pins and patches on offer. In fact the eatery is named after Flynn as 'iiko' いい子 means good boy or good girl. "I stalked Flynn on insta cause he’s cute and we love shibas. So when we were raising money to fund our restaurant, we contacted him to be the model in our video. We’re friends now but he lives far away so he doesn’t visit that often," says Michelle. 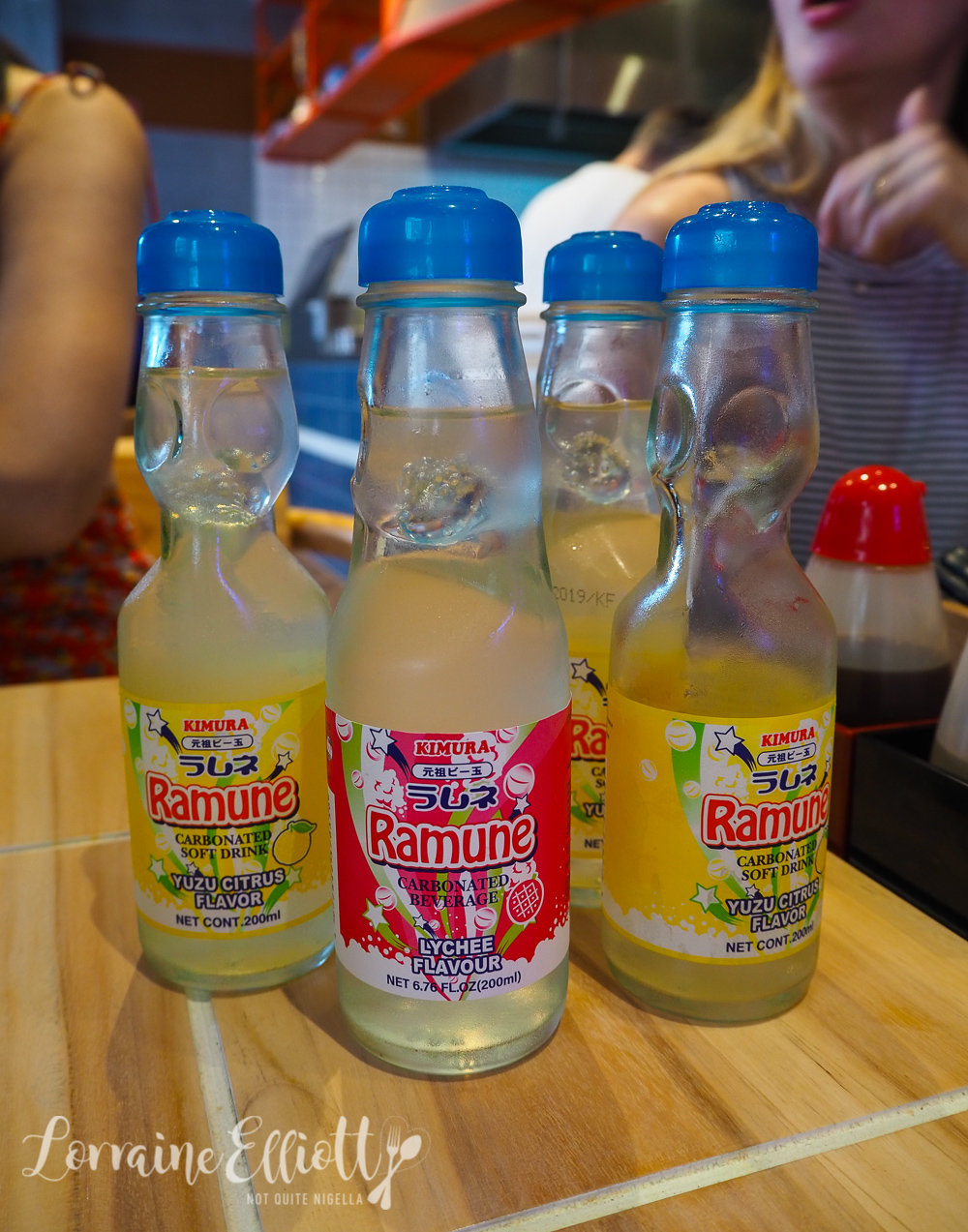 The reason why there are four of us (me, Ivy, Monica and JY) is because we wanted to try as much of the menu as possible. We decide on five dishes and the prawn croquettes.

The noodles are hand made daily using wheat flour. "We have a special recipe passed down to us by our sensei. I took a professional ramen course and focused on learning about Mazesoba. We experimented with different sizes and water content to get the perfect texture," says Michelle. Previously Michelle has run a chain of dessert cafes in Indonesia. 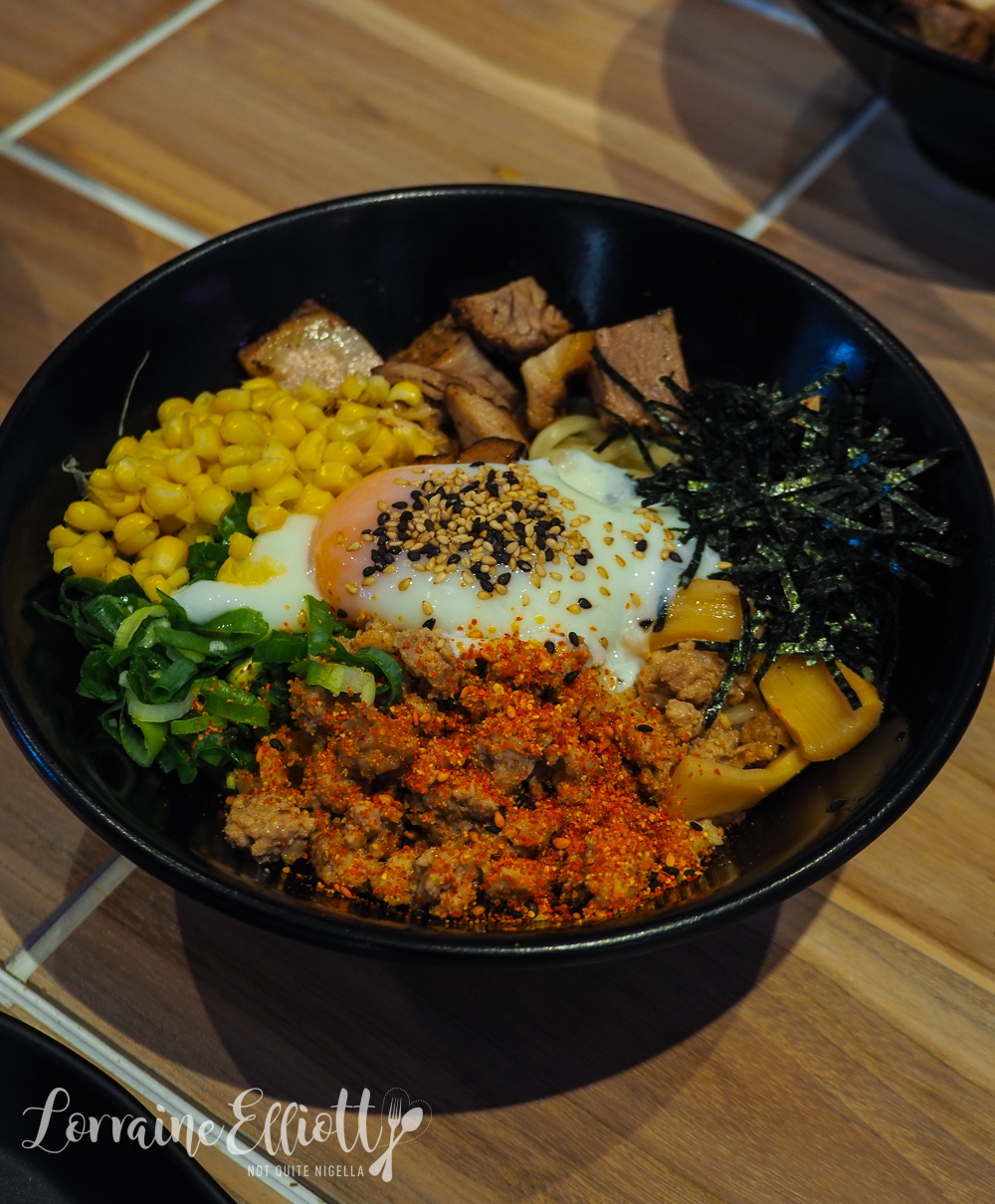 Zenbu means everything and this one has a bit of everything from pork belly chashu, spicy pork mince, onsen egg, green onions, shredded nori, corn, bamboo shoots and roasted sesame seeds. The trick to Mazesoba is adding a chilli and sesame oil and konbu vinegar to the dish and then mixing it well. It's less seasoned than the others and you really do need to add the chilli sesame and konbu vinegar but it's good if you want to try a lot of different toppings in one.

Much has been said about the cheese ramen which comes with grated cheese that you need to toss quickly while the noodles are still hot so that the cheese melts. There is a mix of cheeses (tasty, parmesan and mozzarella), pork belly chashu, onsen egg, green onions, shredded nori, bamboo shoots and roasted sesame seeds. It's rich, especially since we doubled down on the cheese but still delicious. 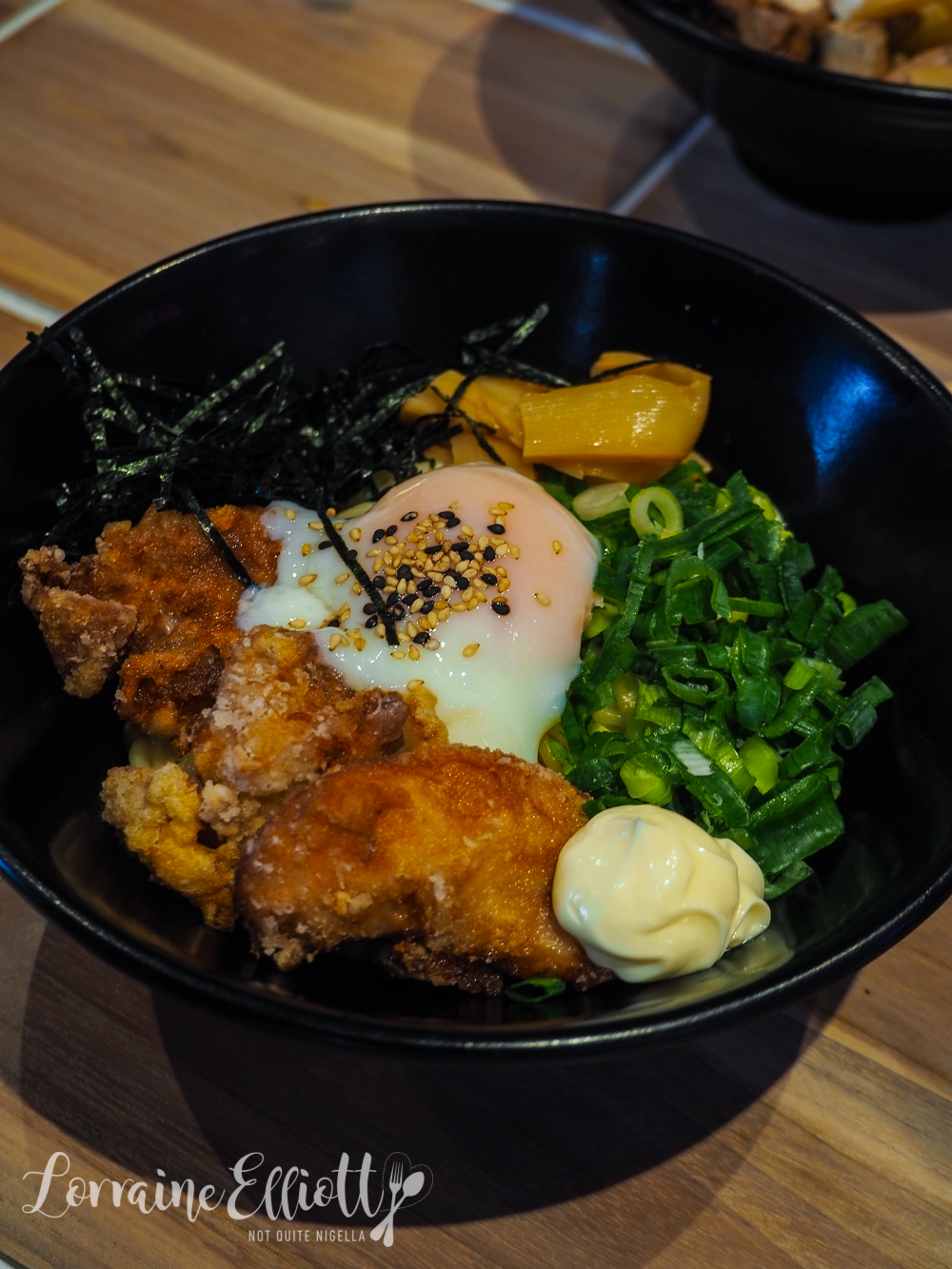 I liked the karaage chicken mazesoba with pieces of chicken karaage, kewpie mayonnaise, onsen egg, green onions, shredded nori, bamboo shoots and roasted sesame seeds because I love chicken karaage and mayonnaise. It's not overly distinct from the other ones both visually and taste wise as there are a lot of common ingredients in these three ramens. 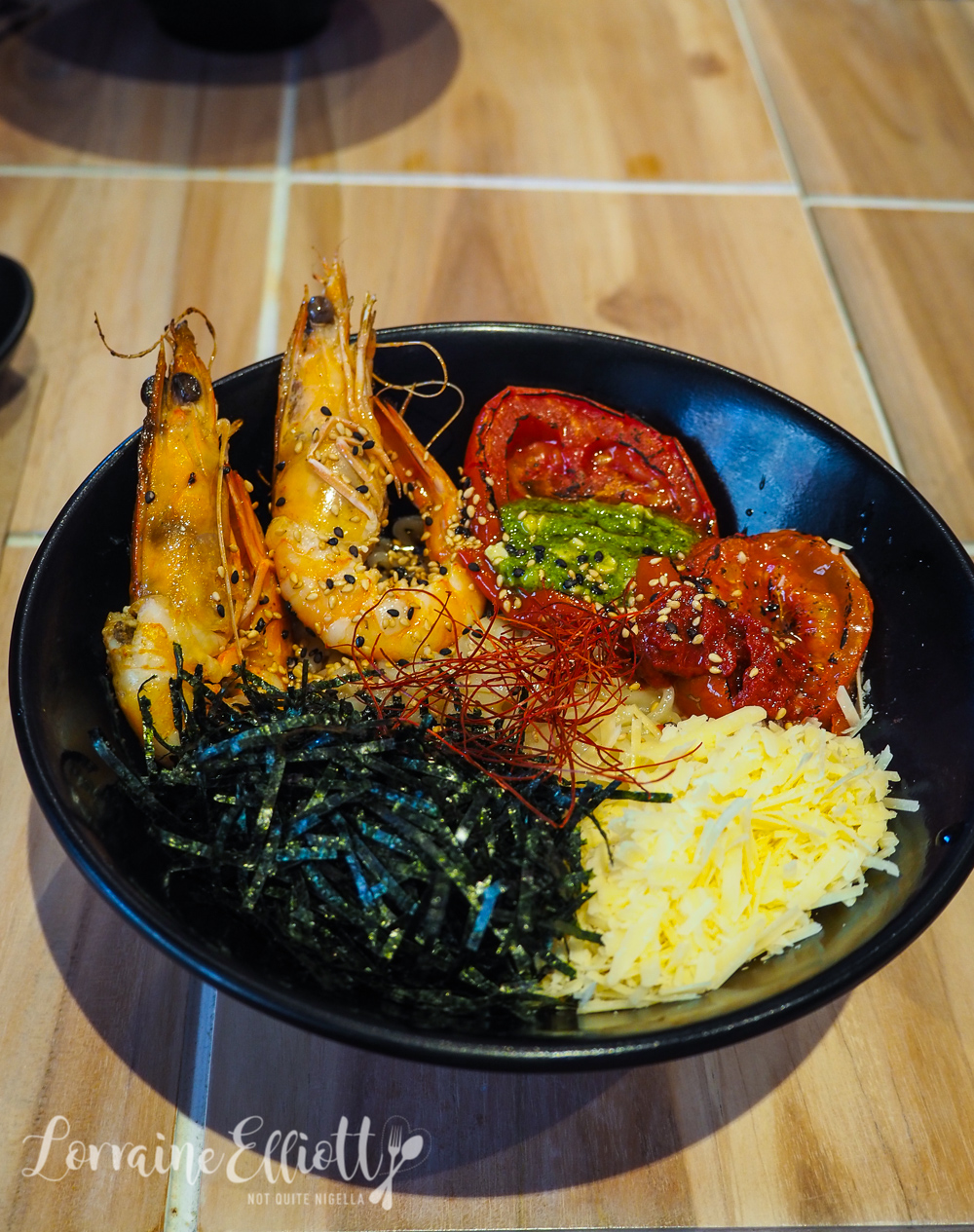 We tend to prefer the ones that are a bit more distinct. The Ebi Tomato Mazesoba has limited portion numbers and has king prawns, slow roasted tomatoes, basil pesto, shredded nori, bamboo shoots, fragrant prawn oil, chilli threads and is really like an Italian pasta dish down to the parmesan cheese. Michelle based this on a prawn tomato ramen at a famous ramen place she went to last year in Ginza. 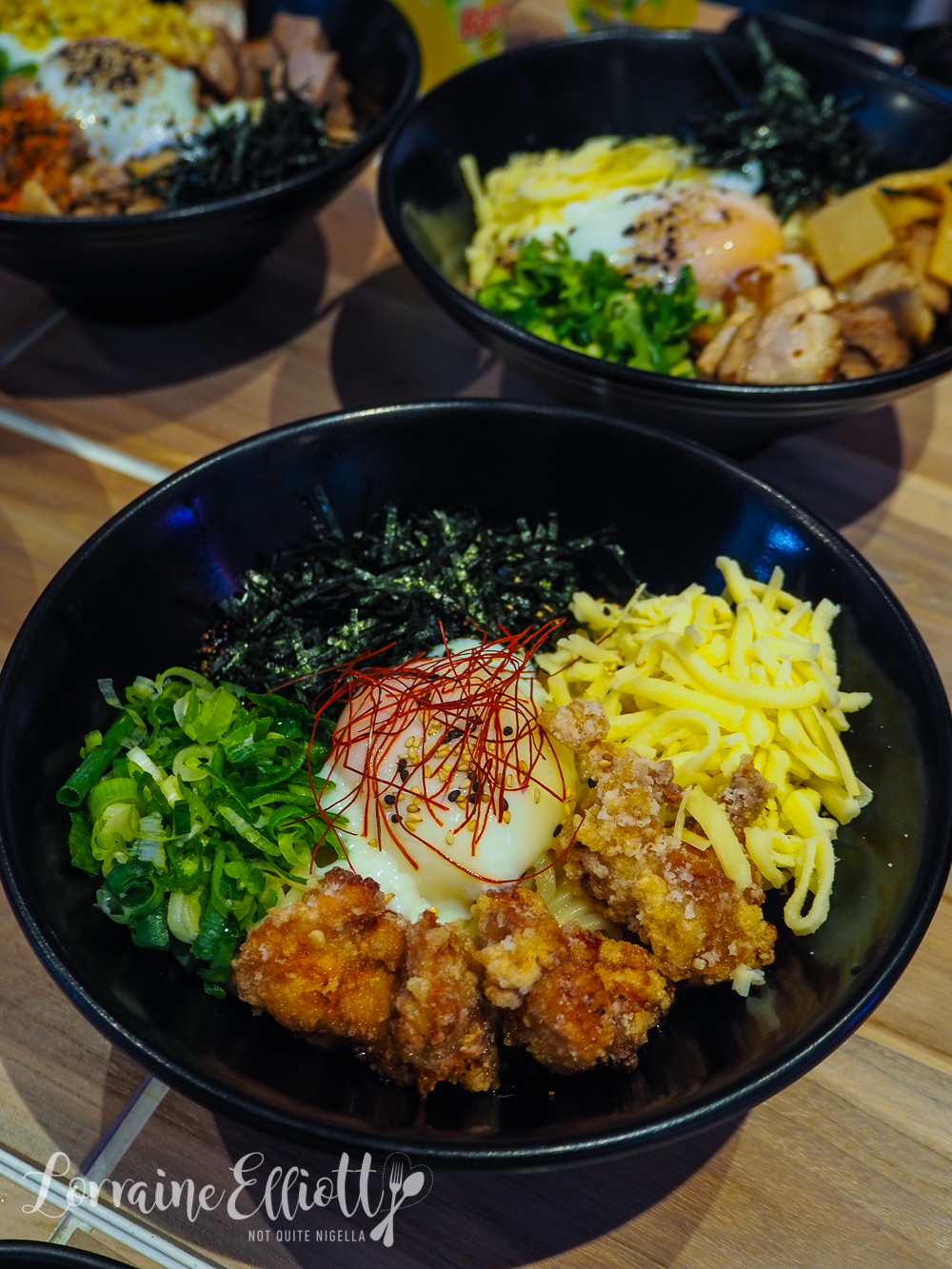 One of my favourites is from the secret menu because it's also distinct from the rest. It is a chicken curry karaage with cheese and capsicum threads. I love the Japanese curry sauce and find myself going back to this one repeatedly. It has become quite popular that they're considering adding it to the permanent menu. 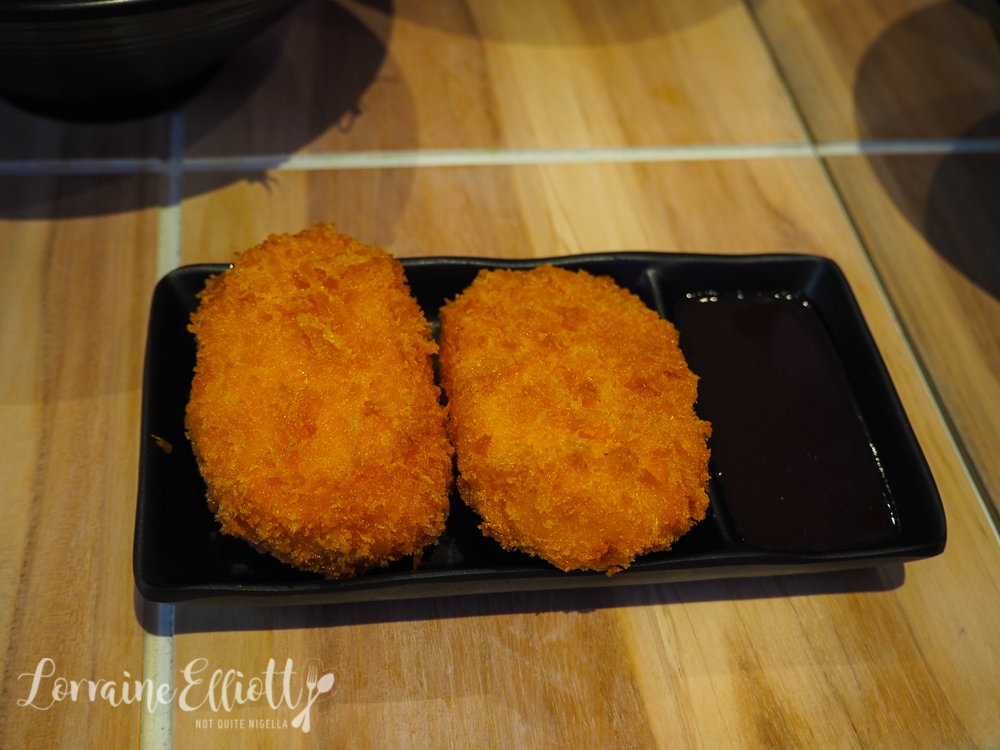 However my favourite thing from the menu is the ebi prawn croquette which is a large sized croquette with plenty of chunky prawn pieces and is super tender and served with bulldog sauce on the side. In fact I think I could eat a few of these they're that good. 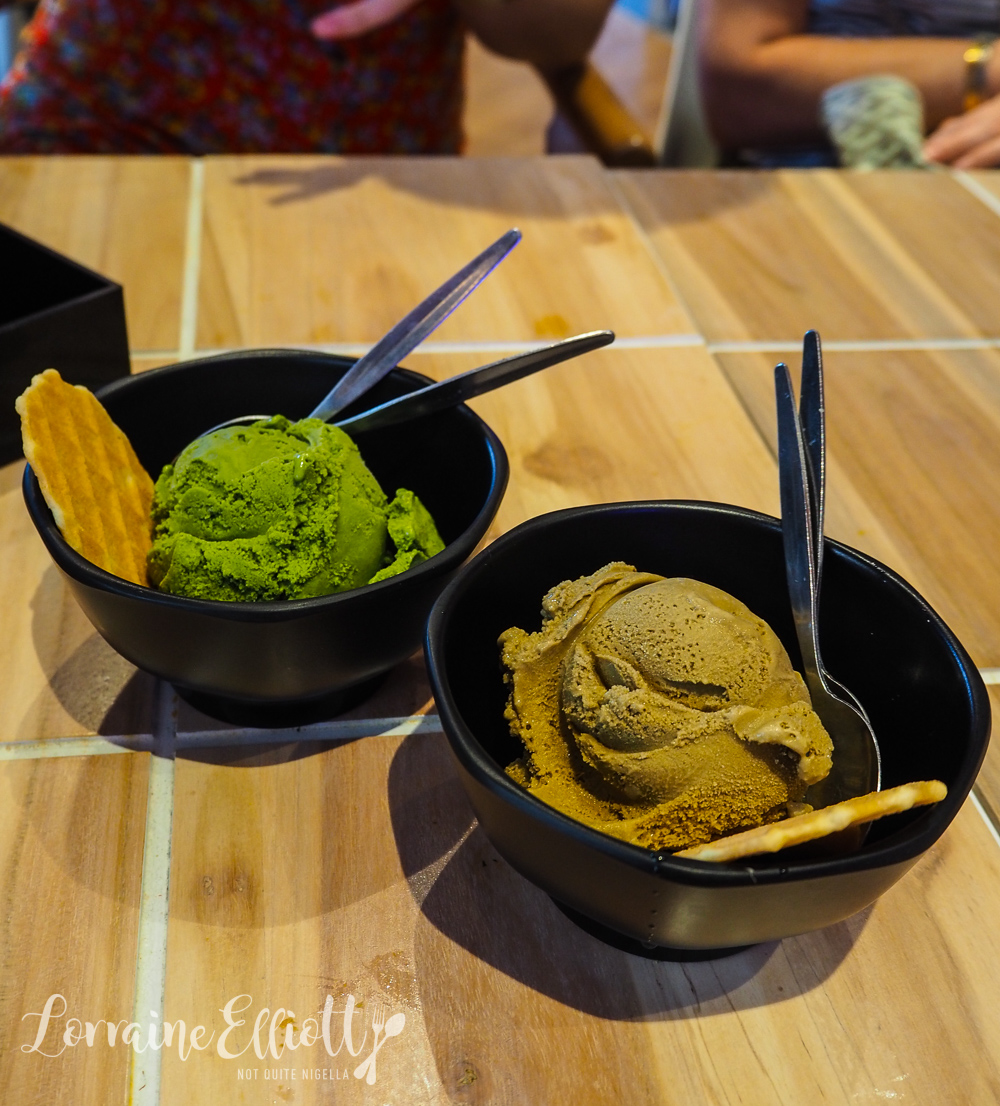 There are two desserts available, a hojicha and a matcha gelato by Grow Matcha who own tea planatations in Japan. I prefer hojicha flavour and it makes for a nice end of the meal in the summer heat.

So tell me Dear Reader, do you ever support Kickstarter ideas? Which mazesoba sounds the best to you?