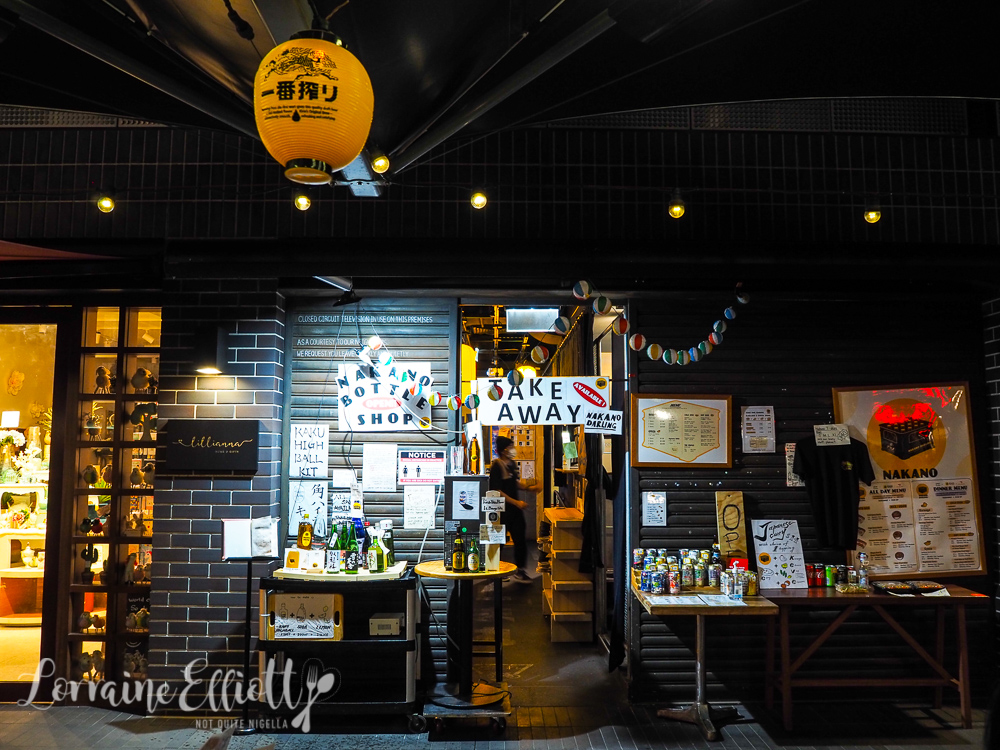 With eating out restrictions lifting, we dip our toe back into the dining scene. Nakano Darling is a convivial Japanese izakaya located on Steam Mill Lane in Darling Square. It's a casual Japanese drink and snack place. It's also a place that takes bookings and operates using their regular menu, not a set menu. 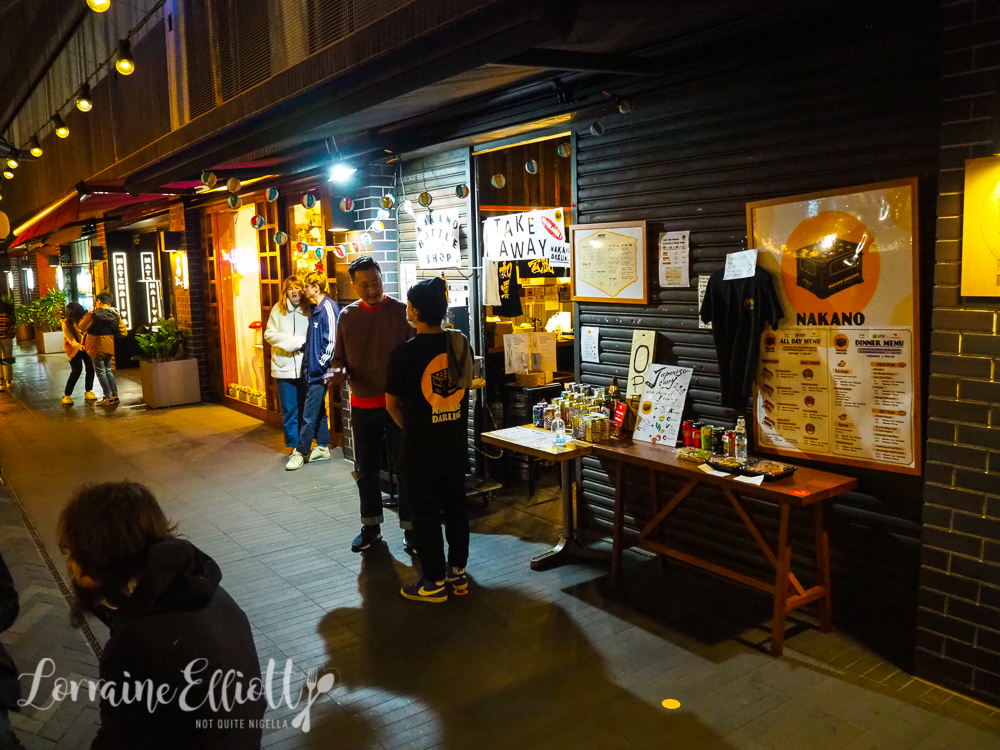 Nakano Darling is equal parts a drinking, eating and socialising establishment. For those unfamiliar with izakaya dining, comradery or the social bonding that occurs while eating and drinking is a hallmark of the izakaya experience. 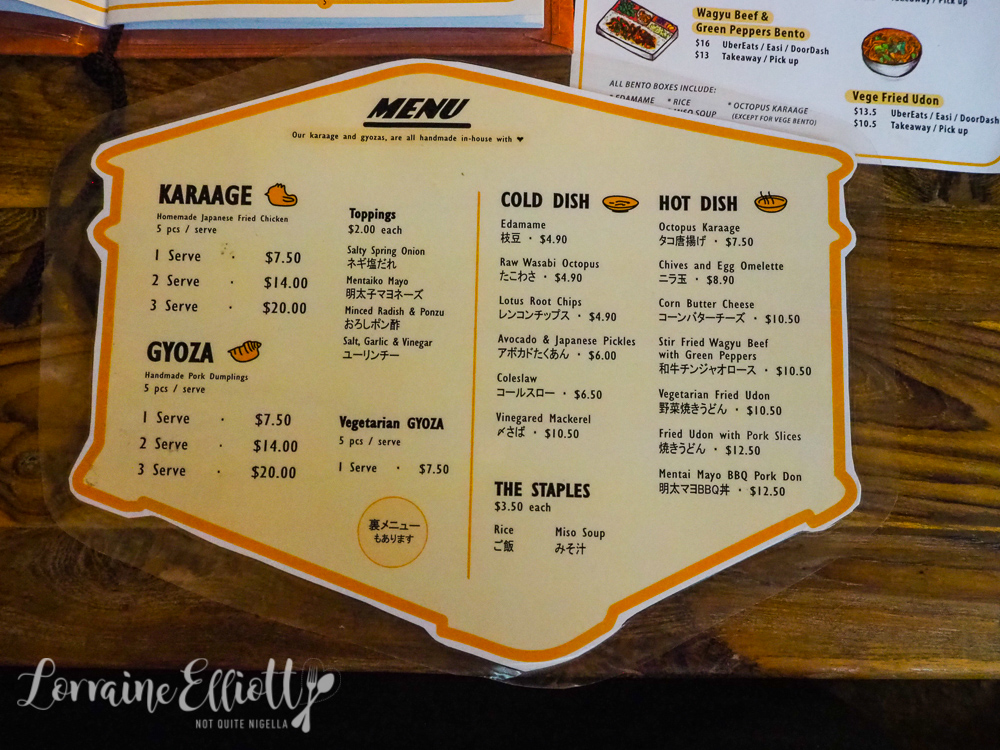 The Nakano Darling menu has a good sized sake and drinks menu and if you're unfamiliar with the ins and outs of the Japanese drinks list the staff are more than happy to point you in a direction or give you their recommendations. The food menu has a tidy list of snackable and shareable bites from their signature chicken karaage to lacy crispy edge gyoza to udon, mackerel and stir fried wagyu with some sides. 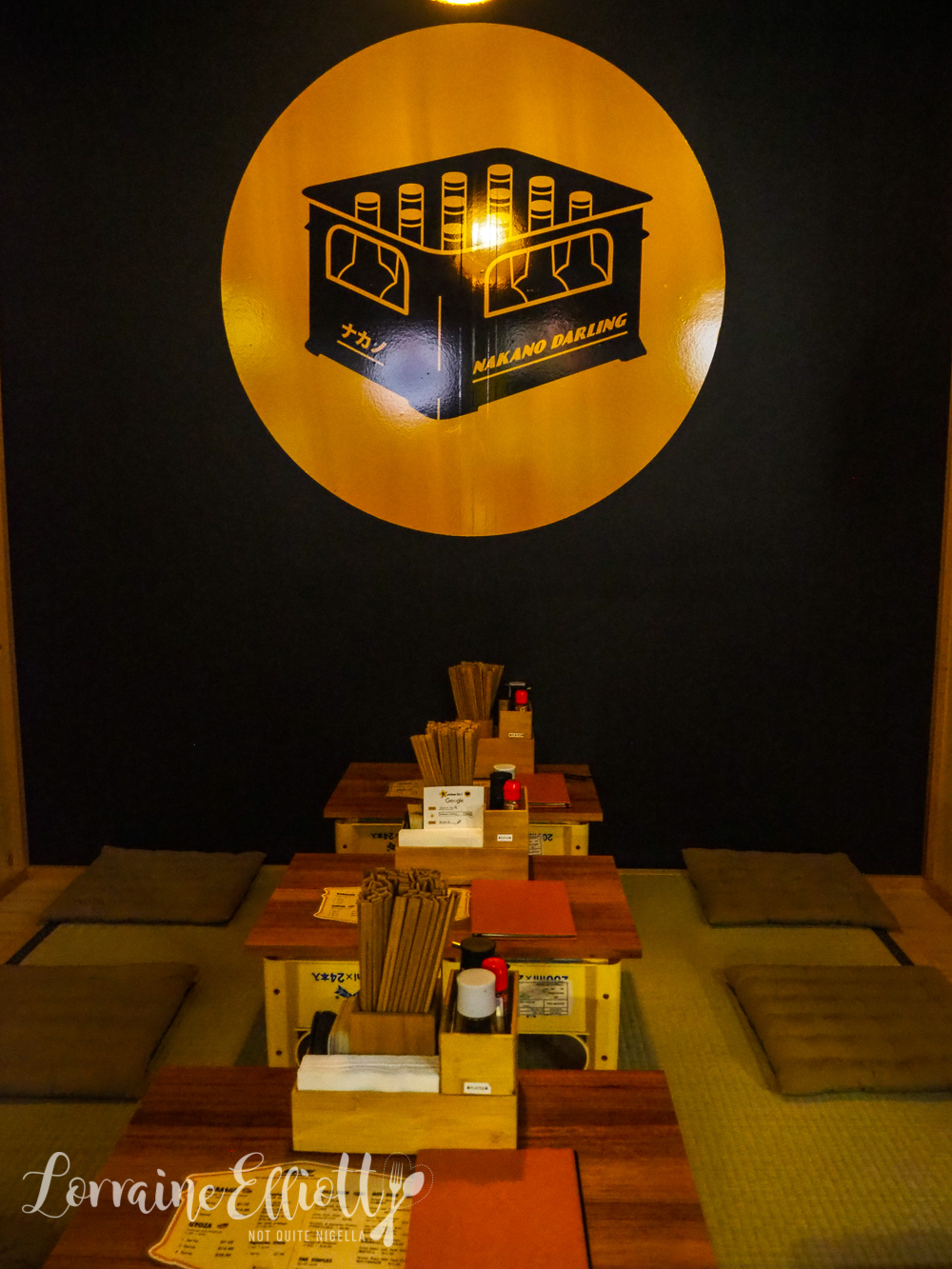 Nakano Darling is by Tin Jung Shea and Mitomo Somehara of Yakitori Yurripi and Tachinomi YP (Tin as boss and Mitomo as manager). Chris Wu was a regular at both establishments and had been considering getting out of the music industry before he joined forces with the pair. Chris explains the name, "Nakano is a district in Tokyo that we have all frequented in the past. It’s full of little alleys with great late night izakayas and drinking holes." 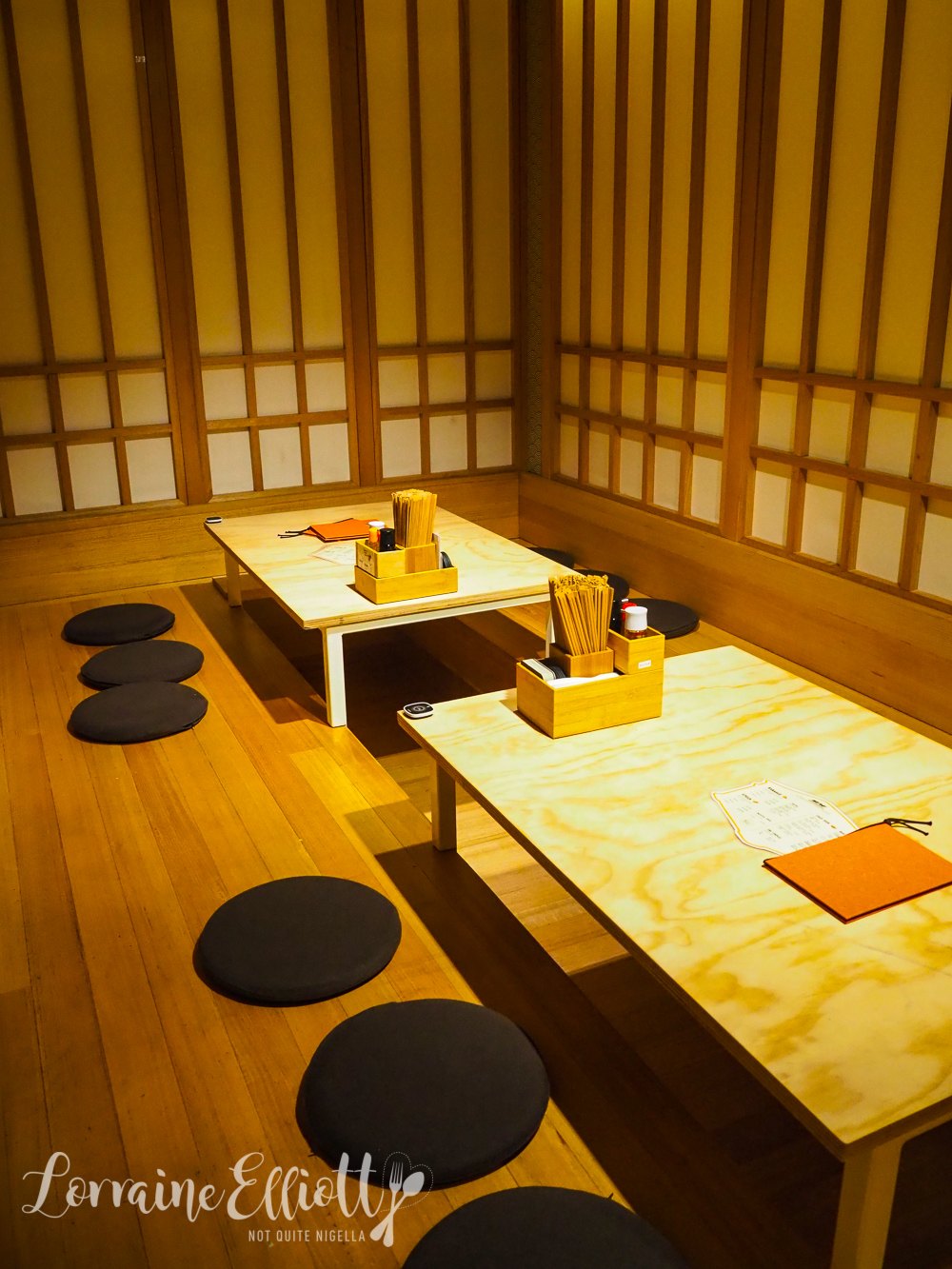 How has COVID-19 affect the restaurant that only opened at the end of 2019? "COVID-19 has totally challenged (and changed) us. Three months ago we were doing takeaway but really only to a few handful of regulars. We weren’t signed up to any home delivery services and now we are with three. Take home packs such as our frozen gyoza bags had not once even registered in any of our minds. We were planning on doing a lunch service but only maybe in 3 or 4 months time when we had fully established our evening trade," says Chris. Now they'll continue with their lunch service. 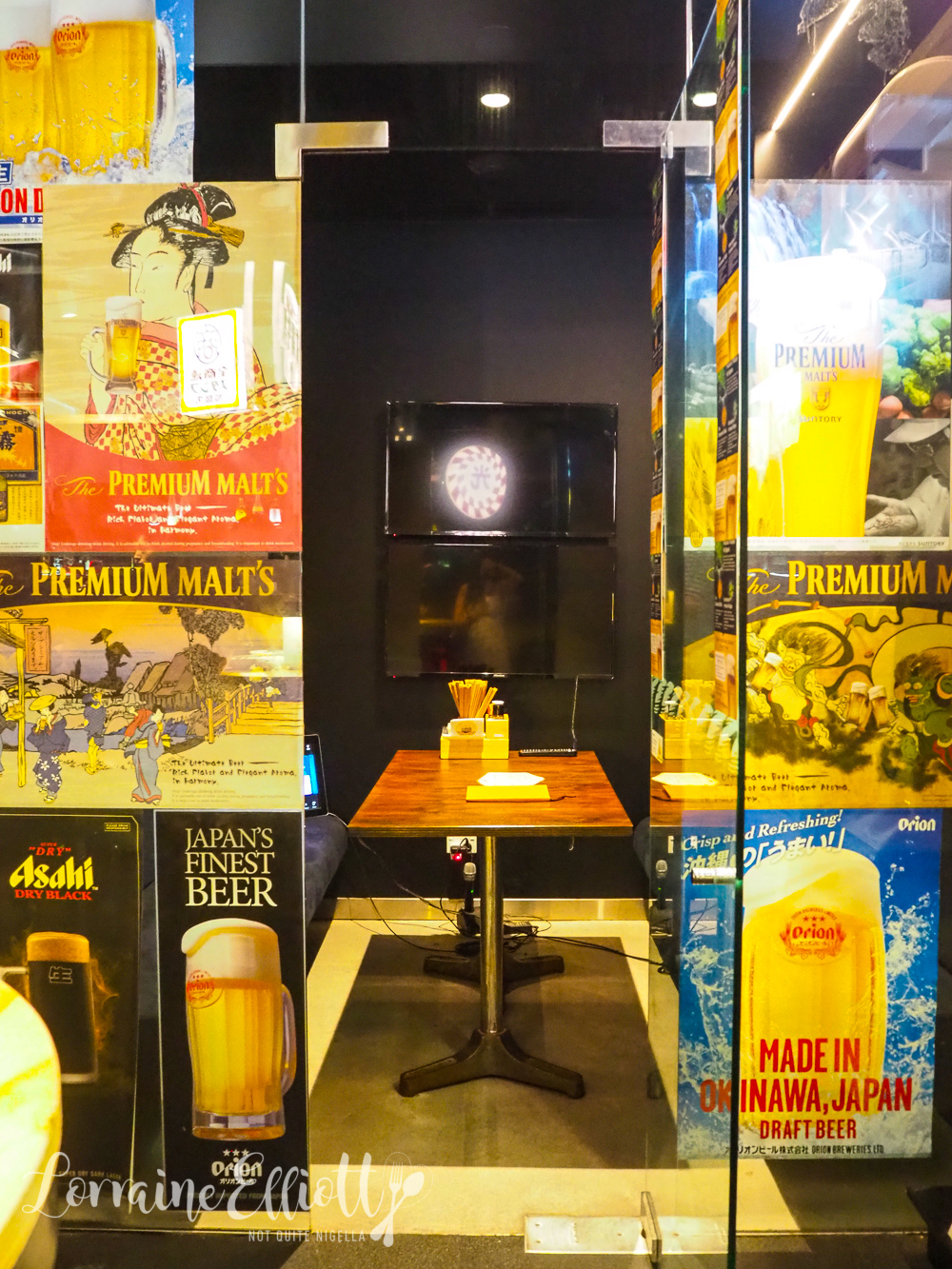 He adds, "Our staff has been hit badly because except for us three as everyone else are on working holiday or overseas student visas. Not one were receiving Job Keeper assistance. A few have returned to Japan at great expense whilst one has decided to trek up to Queensland and fruit pick. The rest have stayed and worked tirelessly. We’ve remained open and expanded our business mostly to help them financially." 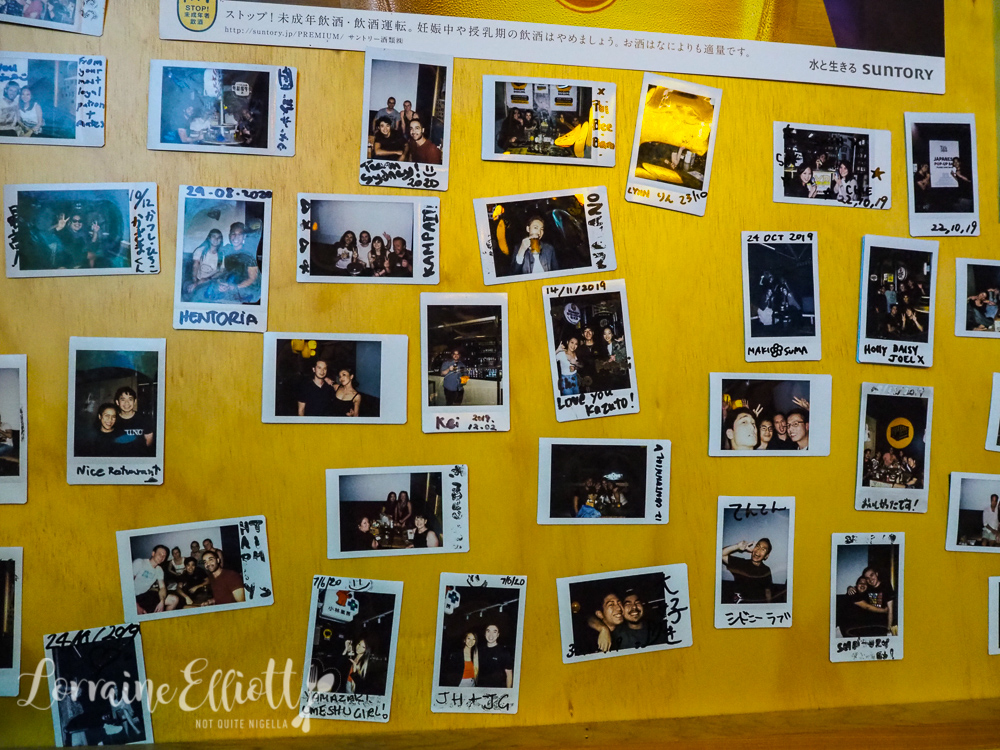 "Obviously the lack of people out and about has been noticeable. Delivery business is now flooded with probably double or triple the number of restaurants. Our overheads remains pretty much the same and in same cases our suppliers are charging more. But we’re proud that we’ve responded and adapted so quickly. I think this has mostly been because we are a small business and not a chain. Its easy for us to decide something and get things in motion right away," explains Chris. 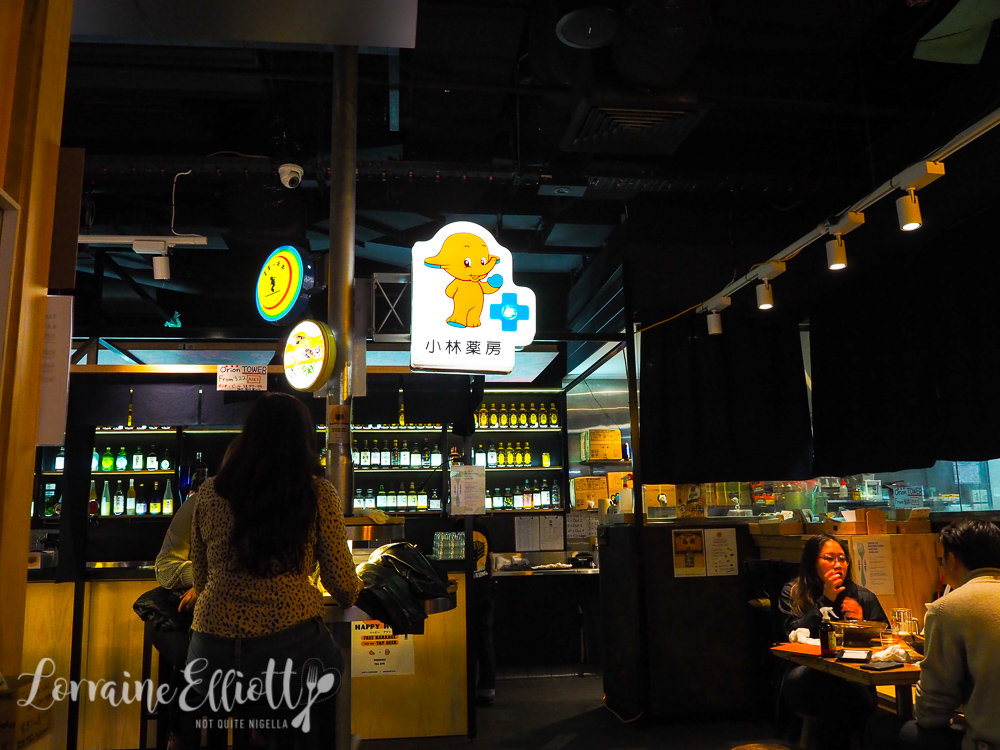 "10 people in a restaurant sounds perfect to me," says introvert Mr NQN as we are on our way with Ivy for our very first meal in a restaurant since COVID-19 took a hold of the world. Making the decision to try eating out has not been without some reservations (no pun intended) and it is exciting at the same time as being slightly nerve wracking. Going out clothes feel stiff and uncomfortable compared to the sweats and fleece and wearing high heeled boots makes me feel like an awkward baby giraffe finding their footing. 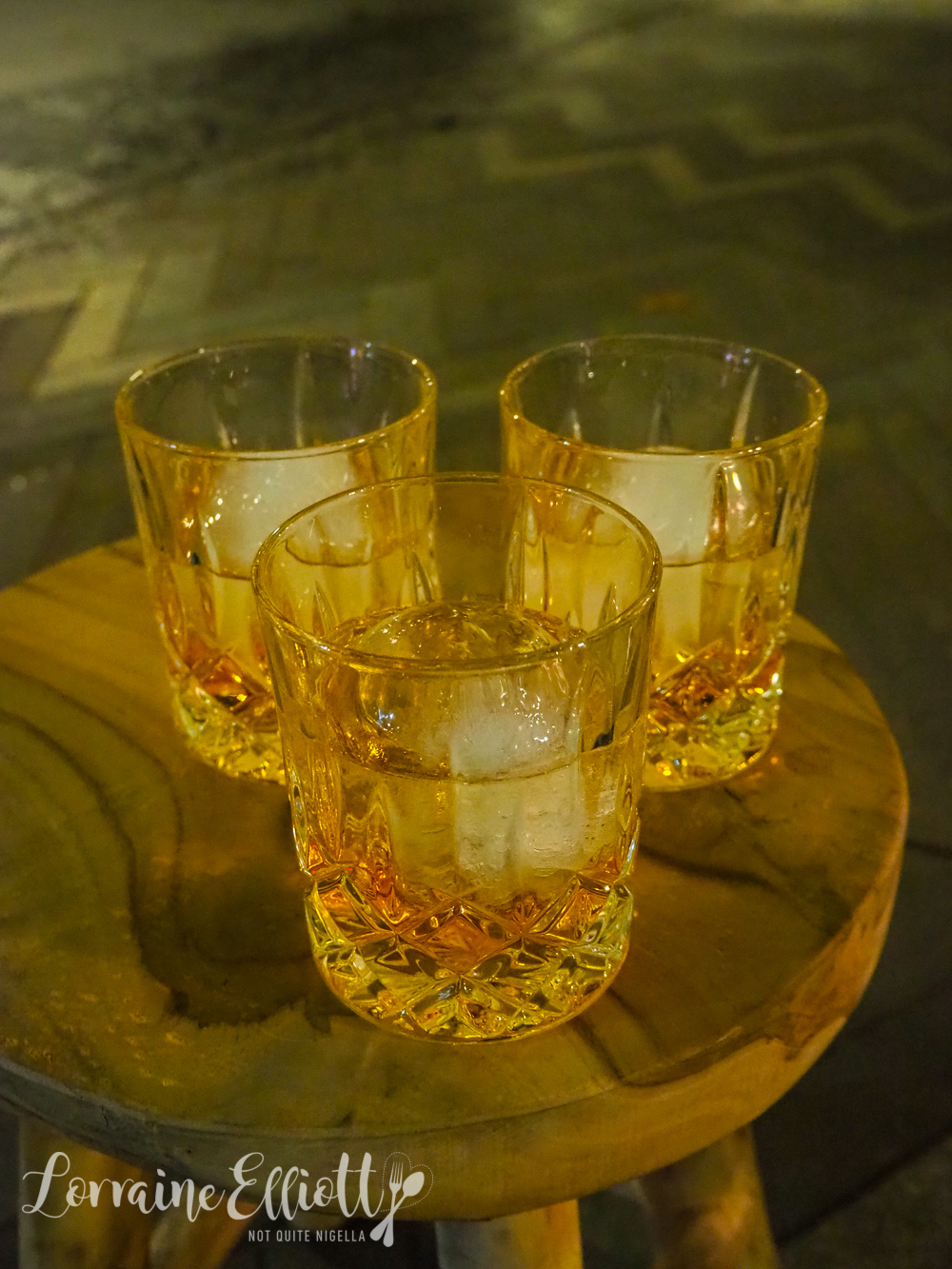 Although it is raining the streets do have a handful of people, mostly singles or couples collecting takeaway from nearby eateries. Our booking is from 7-8pm and we arrive at 6:45pm and wait outside nursing glasses of plum wine until it's 7pm. "Cheers," we say to each other and the first sip feels heavenly sliding down. It warms us up and it's strange how quickly one sip brings back memories of life before COVID-19. Just before 7pm they let us know that our table is ready. They take our temperature with a temperature gun before we enter.

We look around. The staff are wearing masks and there are two other tables and the table next to us will remain empty due to social distancing laws. It's not a massive restaurant so it doesn't feel as strange as others might feel with the 10 person limit. "Should I order?" I ask Ivy and Mr NQN and they happily nod. It feels comforting to be scanning a menu and choosing what to order just like old times. 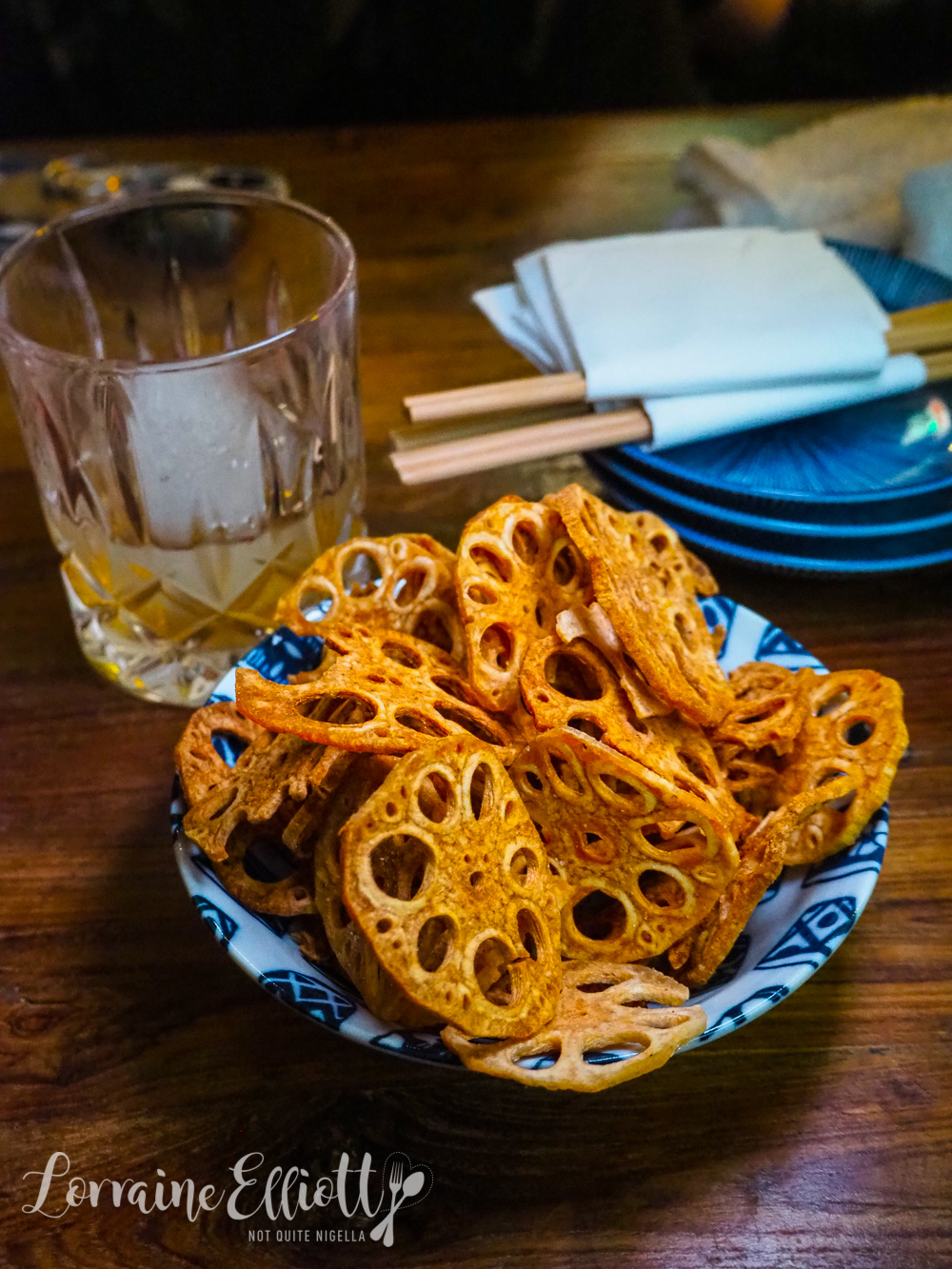 The first thing to arrive are the crunchy lotus chips that are perfectly salted and crunchy. We make fast work of these. Ivy picks one up and says, "Who knew that my very first thing eating out would be a lotus chip?" 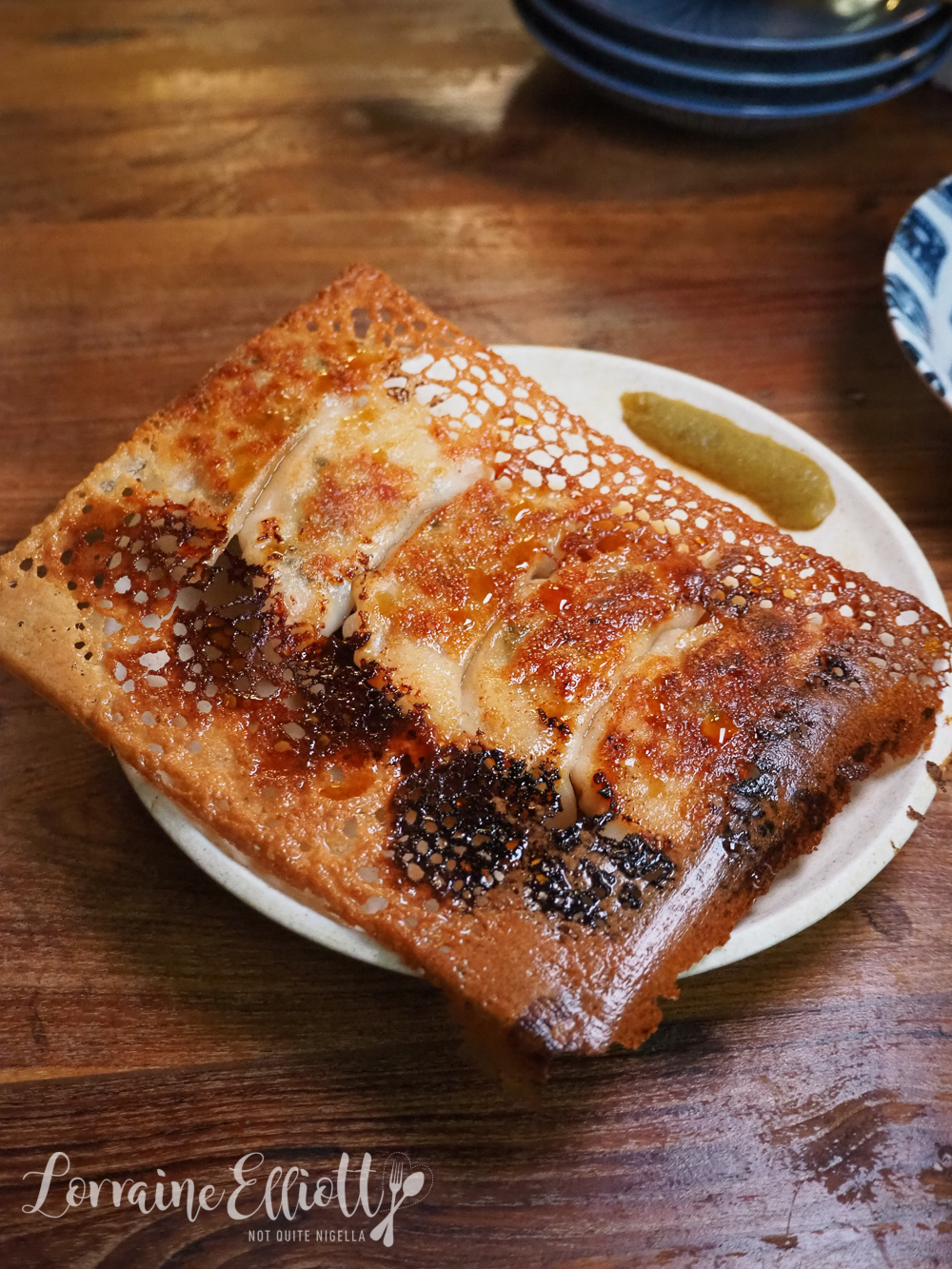 The gyoza with the pork filling and crispy, lacey wings are very tasty. The gyoza is plump and juicy while the lace gives it such a satisfying crunch. 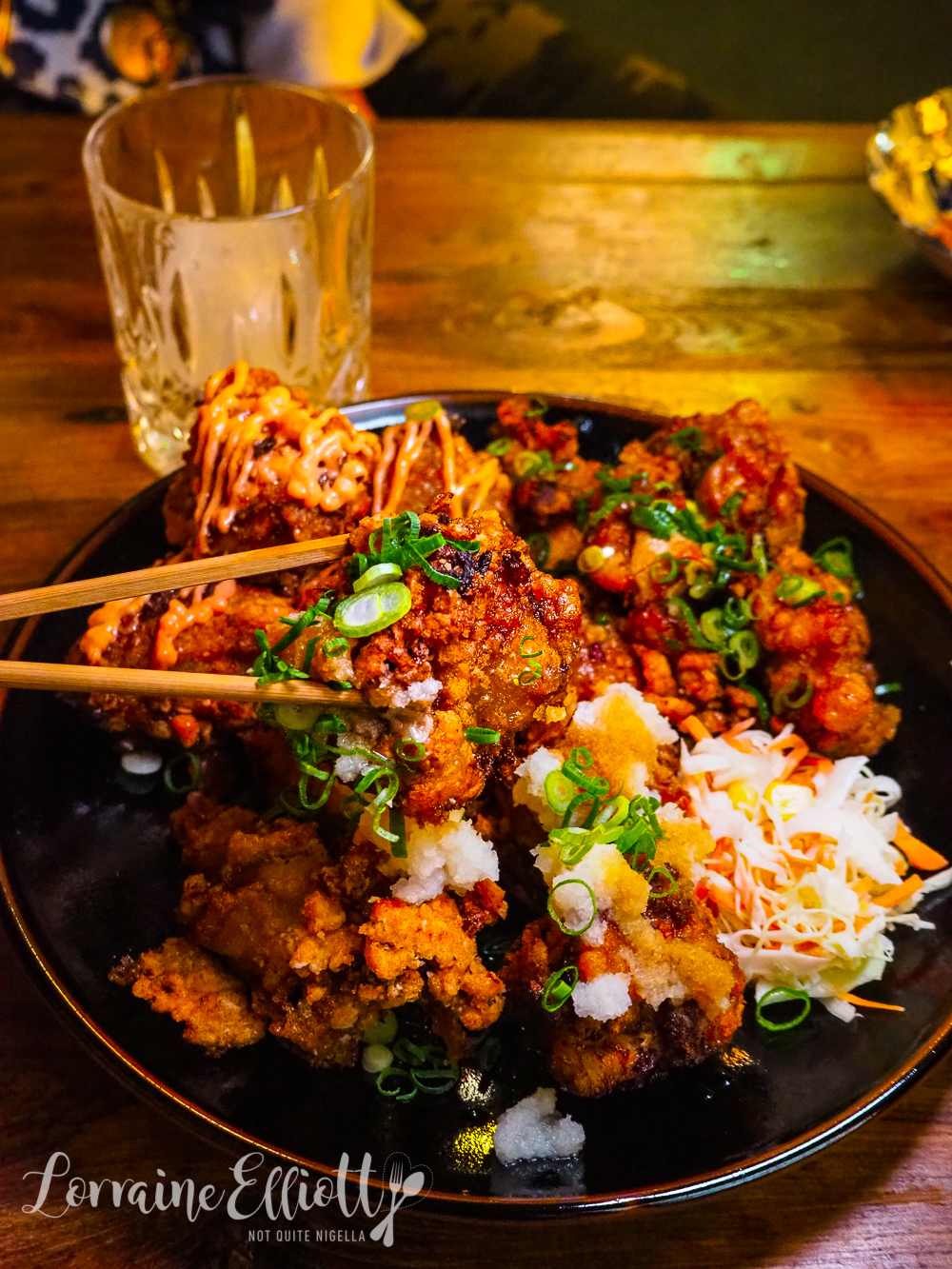 Karaage is Nakano Darling's thing in as much as it is my thing too and I'm very glad that my first meal back involves fried chicken. You can order Nakano Darling's karaage either plain or with toppings with each topping an extra $2. The karaage itself is deliciously crunchy and juicy. There's just enough flour coating without it being too thick and the pieces are cut perfectly for eating with chopsticks. My favourite topping is the mentaiko (pollock roe) mayo but Ivy and Mr NQN's favourite is the Yu-rinchi (salt, garlic and vinegar) one which is pretty damn fabulous too. The grated radish one is nice enough but the radish makes the fried chicken a little wet in texture as there is so much moisture in daikon radish. 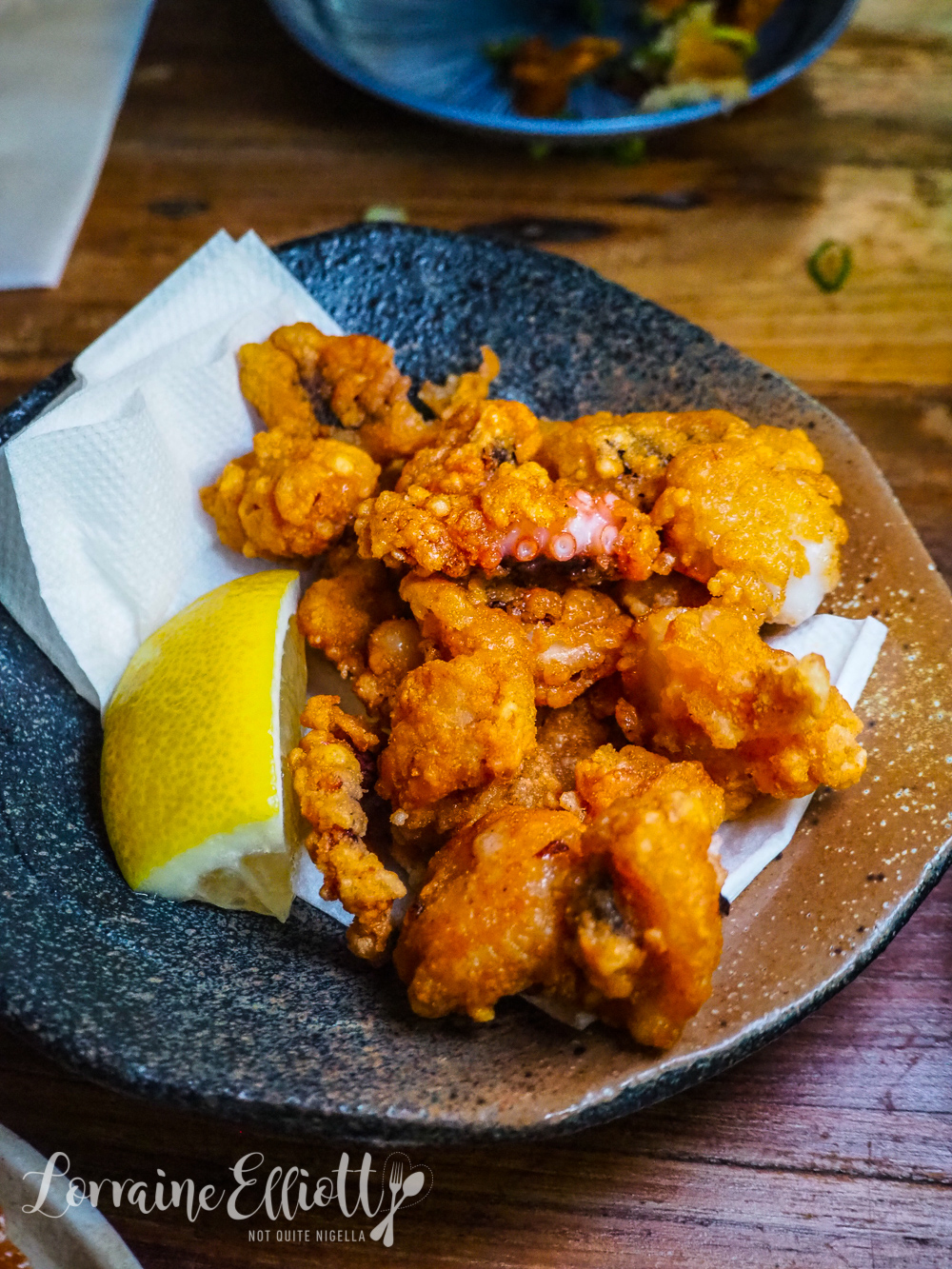 I was curious to try the octopus karaage to see what it was like. The octopus is tender underneath the golden breading and it's a close second to chicken karaage although I think the chicken absorbs the karaage marinade a bit better. 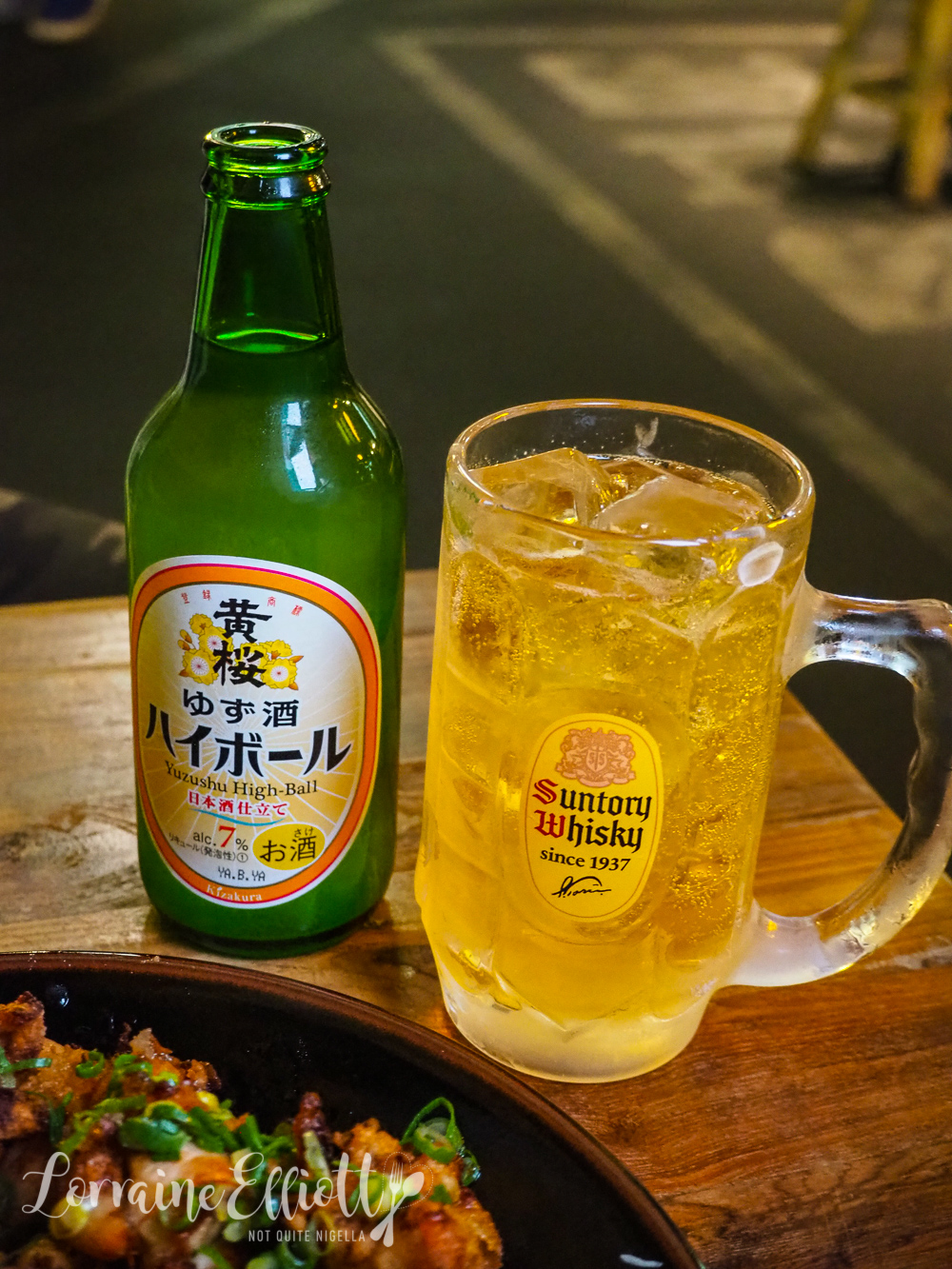 It's time for another round. It's a Ginger Highball for Mr NQN and a Yuzu Highball for Ivy (I'm driving). His ginger highball is refreshing and a great accompaniment to the tasty fried food. 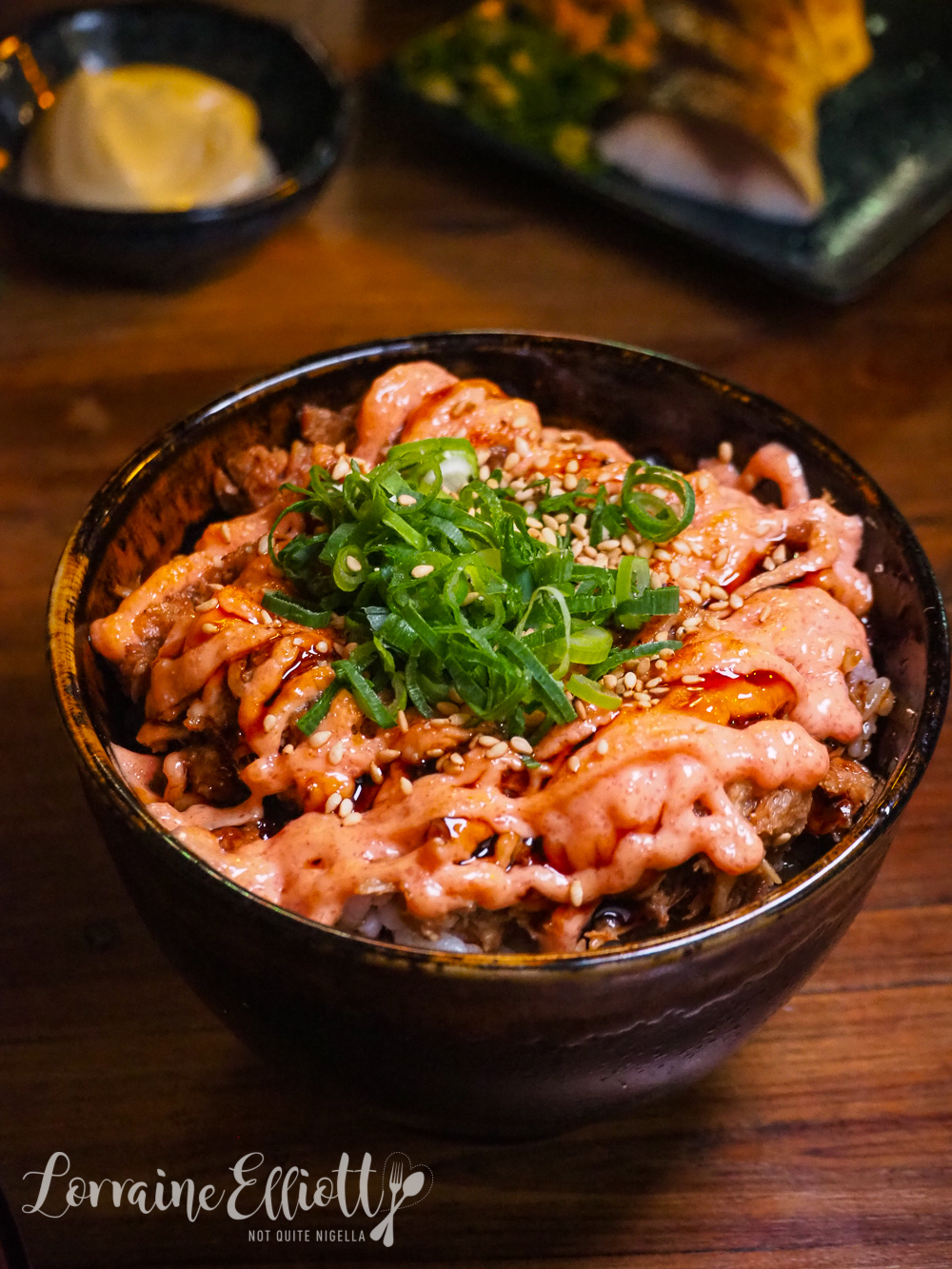 We also order a bowl of the Mentai Mayo BBQ Pork rice bowl. There's a generous amount of saucy, finely chopped bbq pork and mentaiko topping to the bowl. It could be a bit hotter in temperature though but it is tasty. 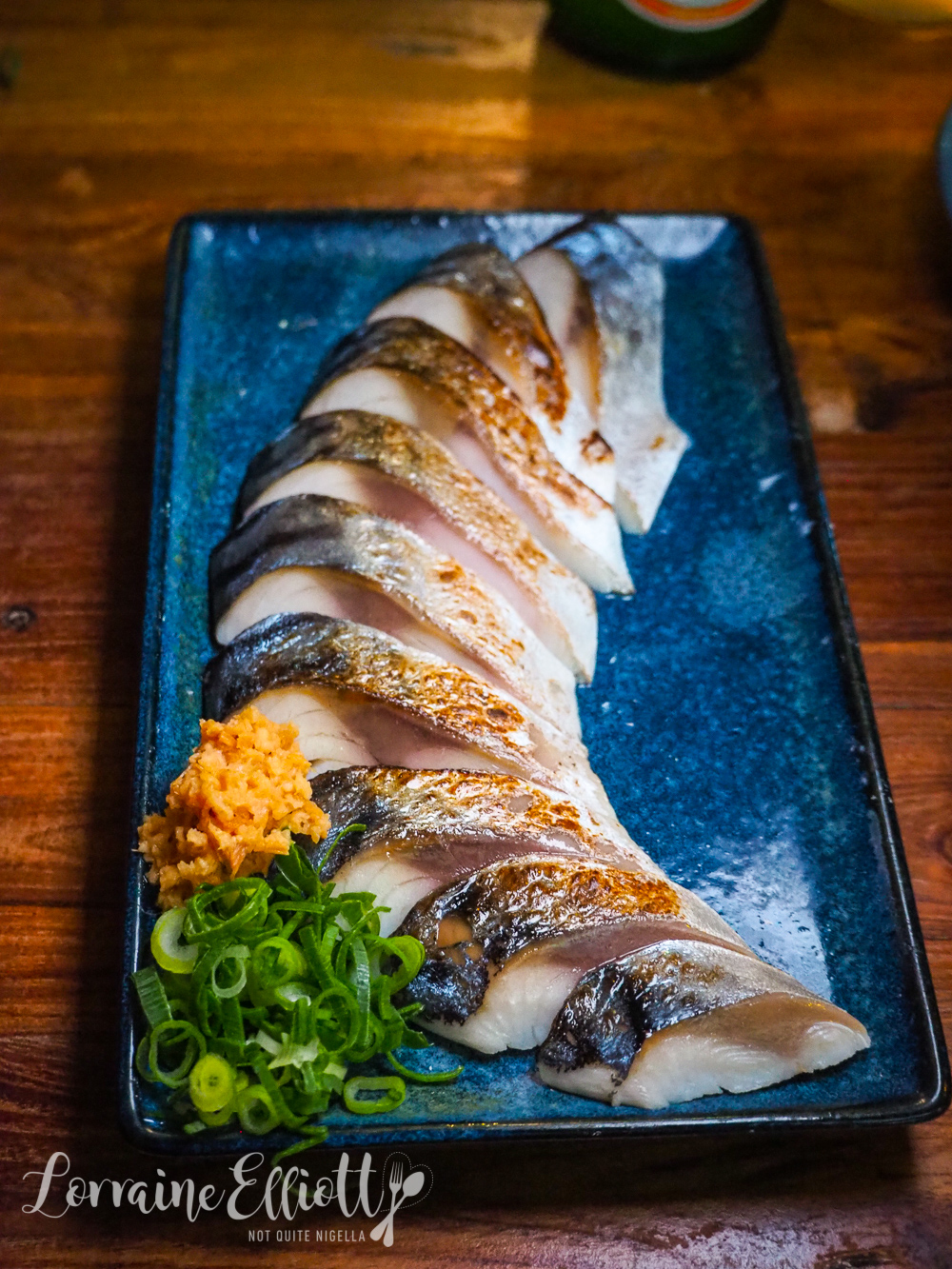 In the vein of eating something a bit healthier to balance the onslaught of chicken karaage we try the Shimesaba. Saba or mackerel is a really popular fish in Japan, especially cured in vinegar. I've mostly had it on top of sushi rice and it's especially good on top of rice as mackerel can be a strongly flavoured fish and the rice helps balance it. I have it with some of the rice at the bottom of the don bowl above.

There's no dessert on the menu and it's 7:47pm so we've been dining for 47 minutes and yet we don't feel rushed at all, it feels like we've been out for a good amount of time. "This feels amazing," says Ivy, her eyes shining and I couldn't agree more.

So tell me Dear Reader, how do you feel about eating out and have you been out to eat yet? Which food do you think will be your first meal back? 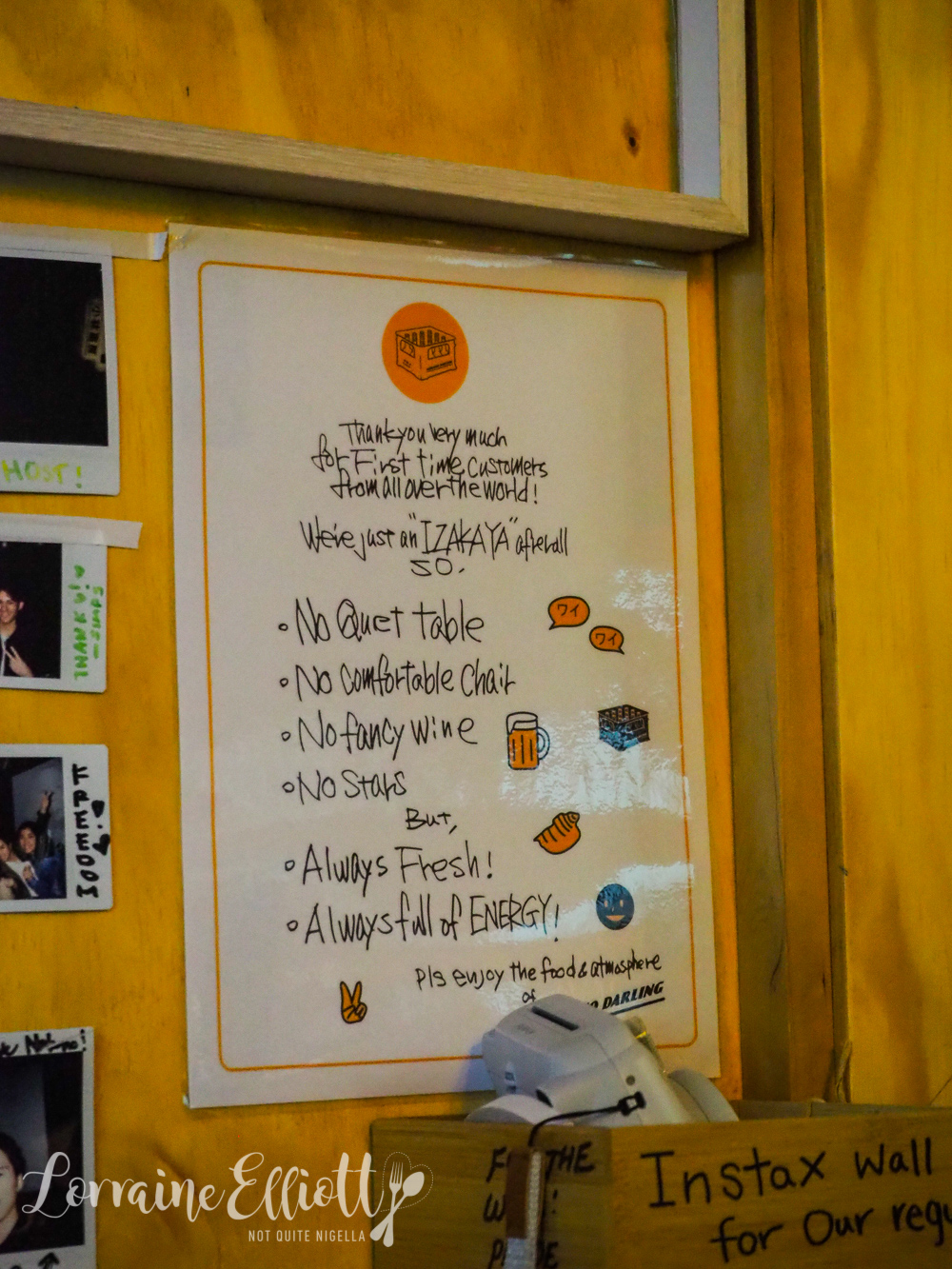