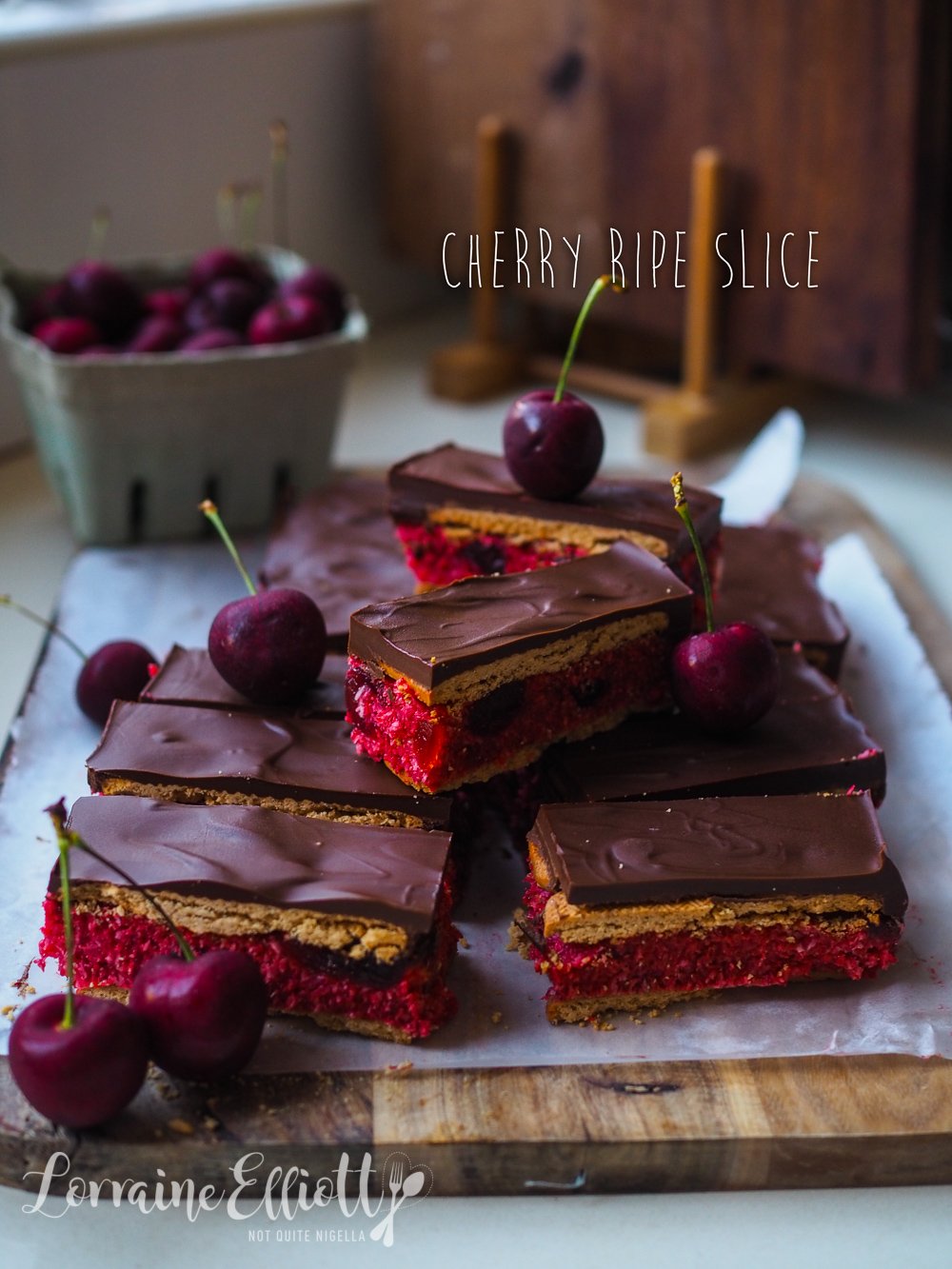 Need a quick but tasty slice to take to a gathering? This Cherry Ripe slice is simplicity itself. Tasting just like a Cherry Ripe bar (but better if you use good quality chocolate) this has a delicious filling made with coconut and packed with glace cherries plus a layer of dark chocolate on top!

I didn't grow up eating slices but I like to think that I'm making up for it now. This is part of the series I'm doing this year on classic Australian slices. In fact this recipe is from my lovely friend Nic in Melbourne. Her mother was the queen of slices in the 80s and 90s-they had lemon, choc peppermint, caramel and hedgehog and a dozen more. I was so excited when Nic kindly offered me her mum's precious recipes! 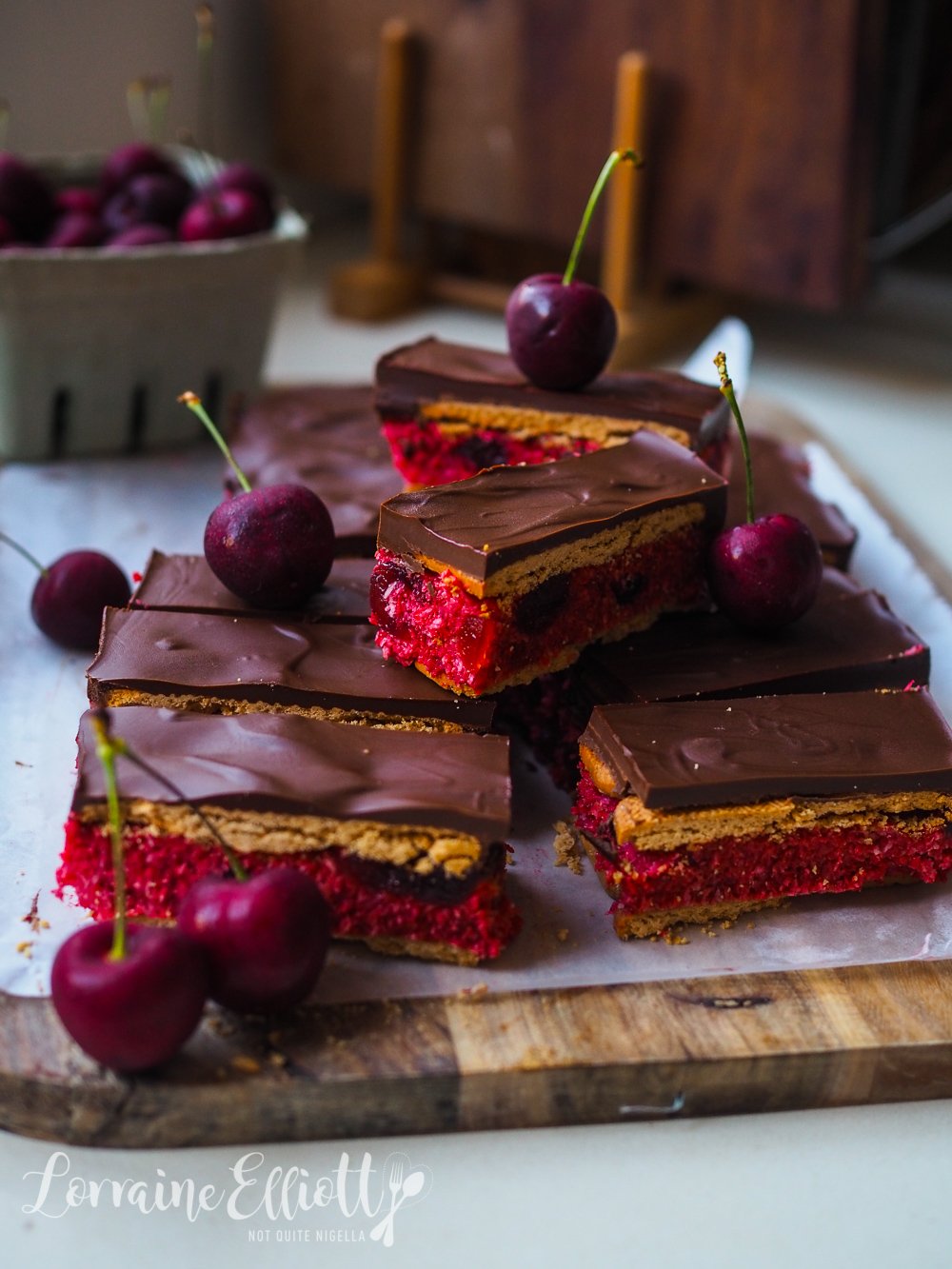 I made a batch of these for Mr NQN's lunch and another batch went to the Asylum Seeker's Resource Centre for lunch as slices are pretty much tailor made to feed large groups of people. Mr NQN loves these and I popped some into his lunches every day.

We've been married for a few years now and at this stage marriage for us is about making each other happy and compromise but it's also about choosing to die rather than admit that you're wrong. A small example is when I recently purchased some charging cables.

I would rather die than admit that 3 metre charging cables were a mistake. "3 metres?" said Mr NQN skeptically. "Yes I wanted them to be as long as possible so I could turn over in bed while reading my phone at night," I answered him. Well it turns out that 3 metres is really, really long. The fact that I bought a pack of three of them only exasperated him even more. I put one in my office, one by the bed and one in the car. 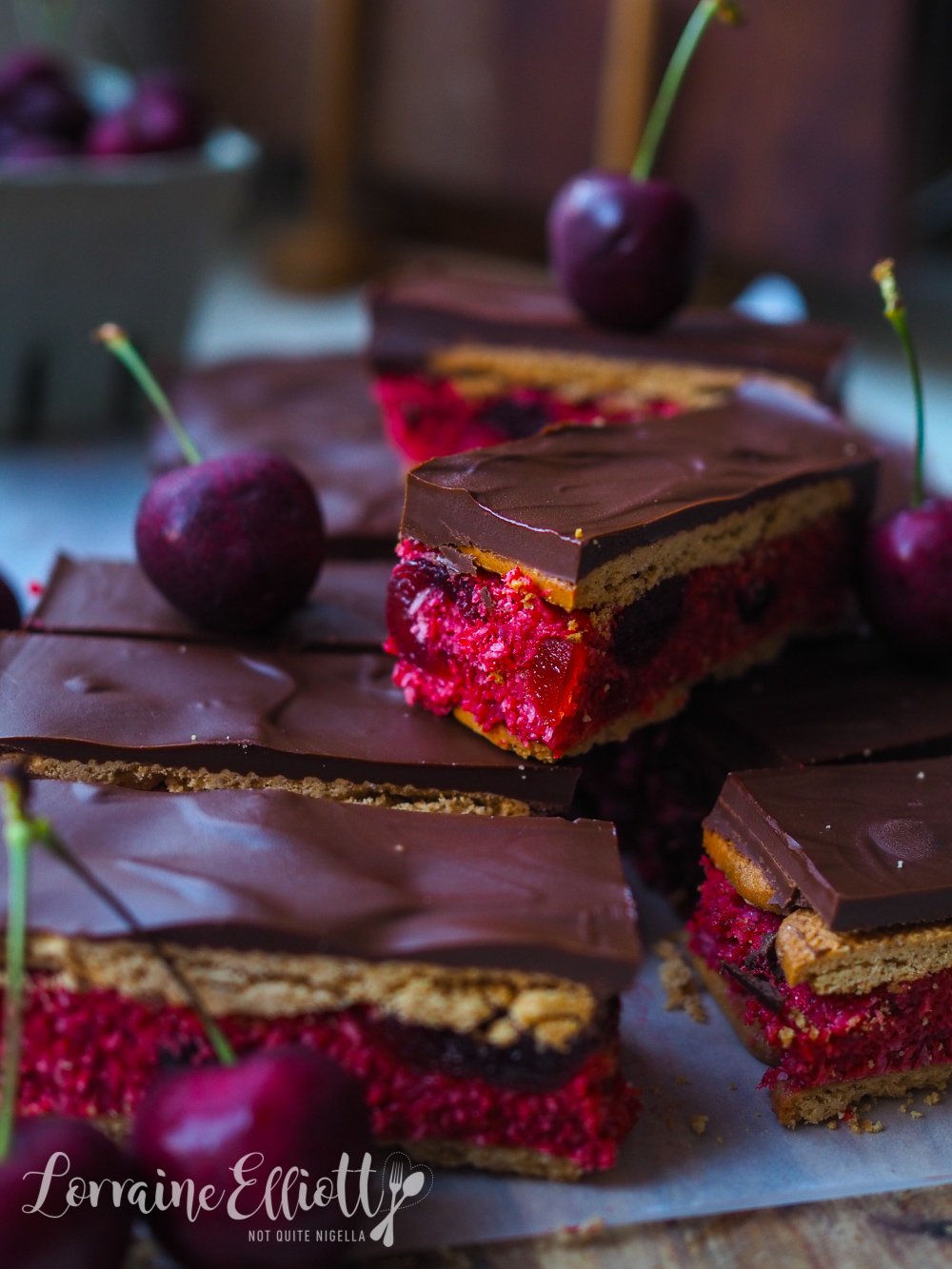 One night when he was giving me a lift to the city I was charging my phone on my super long cord. "You could charge your phone from the boot," he said dryly. "RUDE," I answered him. When it came to getting out of the car, I disconnected my phone and got out. The cord was so long that it snaked out into the street. "Your cord!!!!" he said one second before I closed the door. He shook his head at his wife and her 3 metre cord.

Every time after that I'd say to him, "I'm glad my cord is 3 metres long!" and he'd roll his eyes and smirk. And do you ever think I'm going to admit that a 2 metre cord would have sufficed? No! I will go to my grave with my 3 metre cords! Maybe next time I'll buy even longer ones!

So tell me Dear Reader, are you stubborn at admitting you're wrong? Do you like Cherry Ripes? Do you have any slice suggestions and/or recipes? 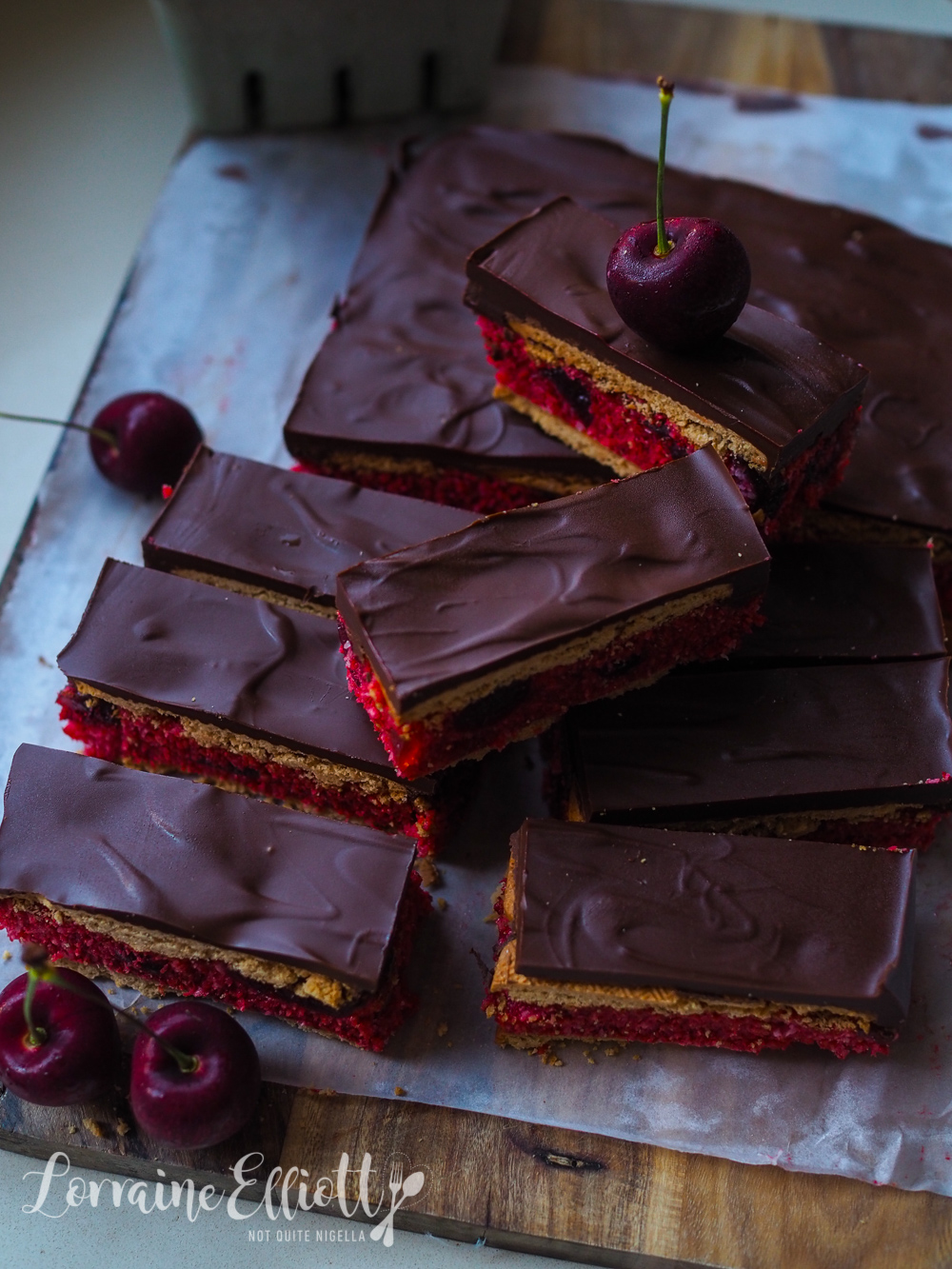 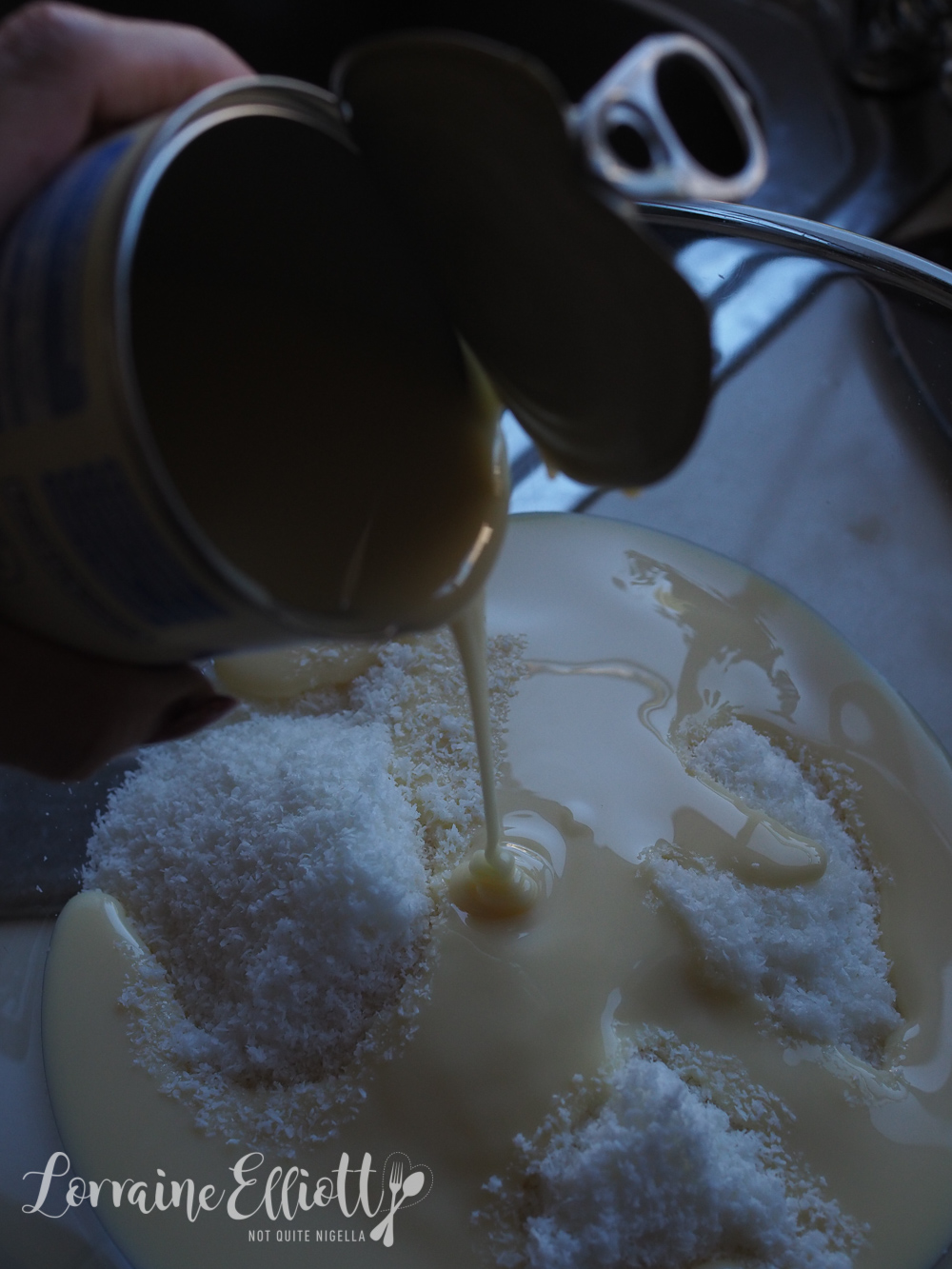 Step 1 - Line a lamington or slice tray (17x27cms/6.8x10.8inch) with parchment. Place half of the biscuits on the base of the tray and set aside. Place the condensed milk, coconut, coconut oil, cherries and red food colouring in a bowl and mix to combine well making sure the mixture is a uniform colour. 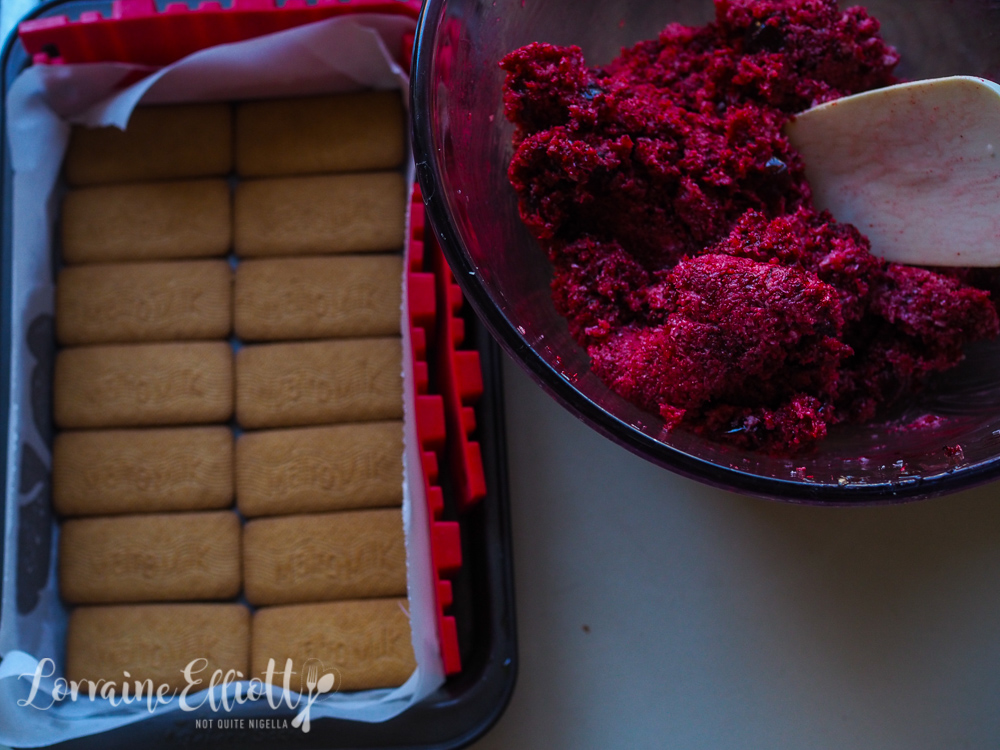 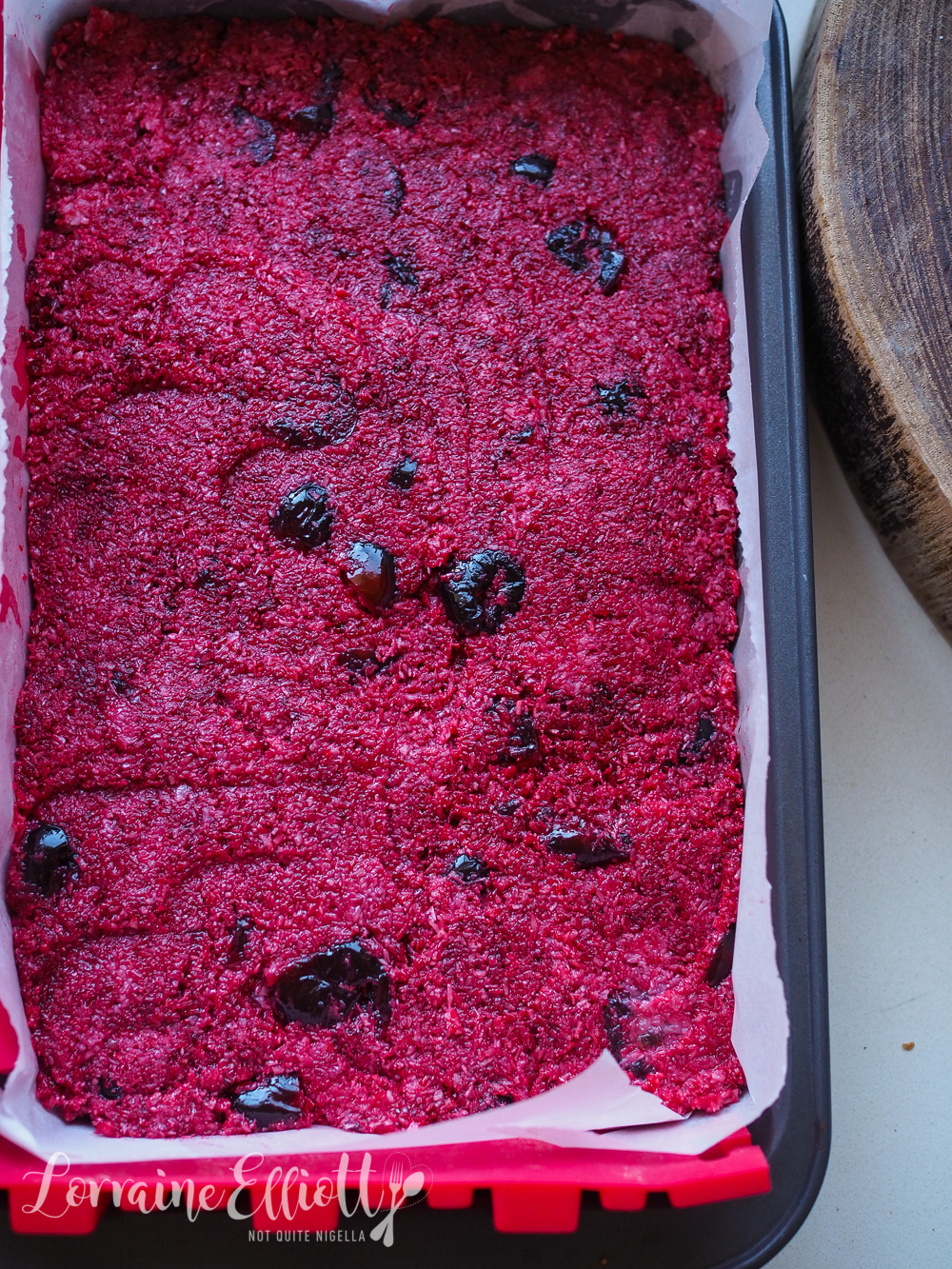 Step 3 - Melt chocolate and coconut oil together in the microwave or double boiler and mix until smooth. Spread over the top of the slice and refrigerate to set. 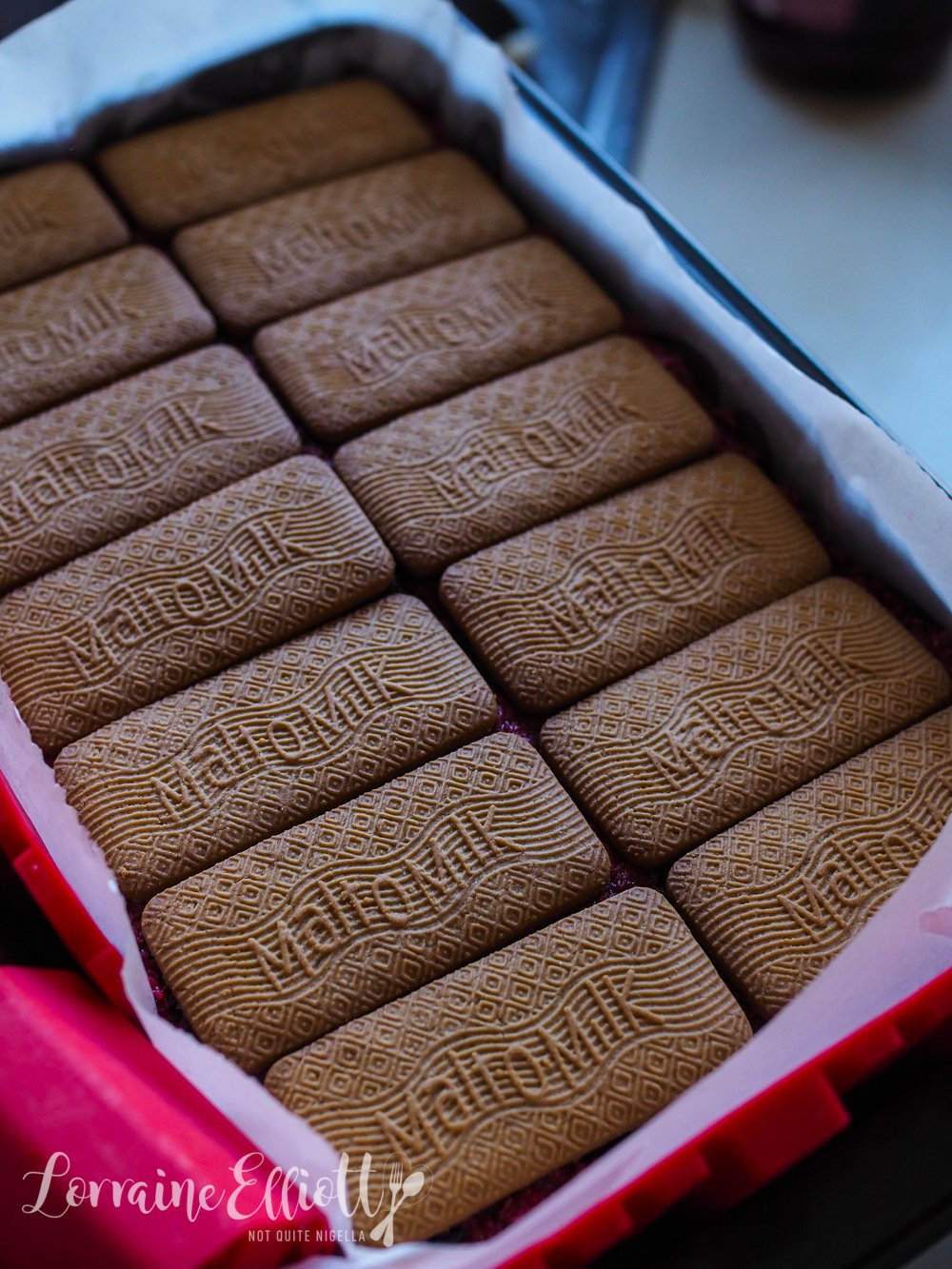 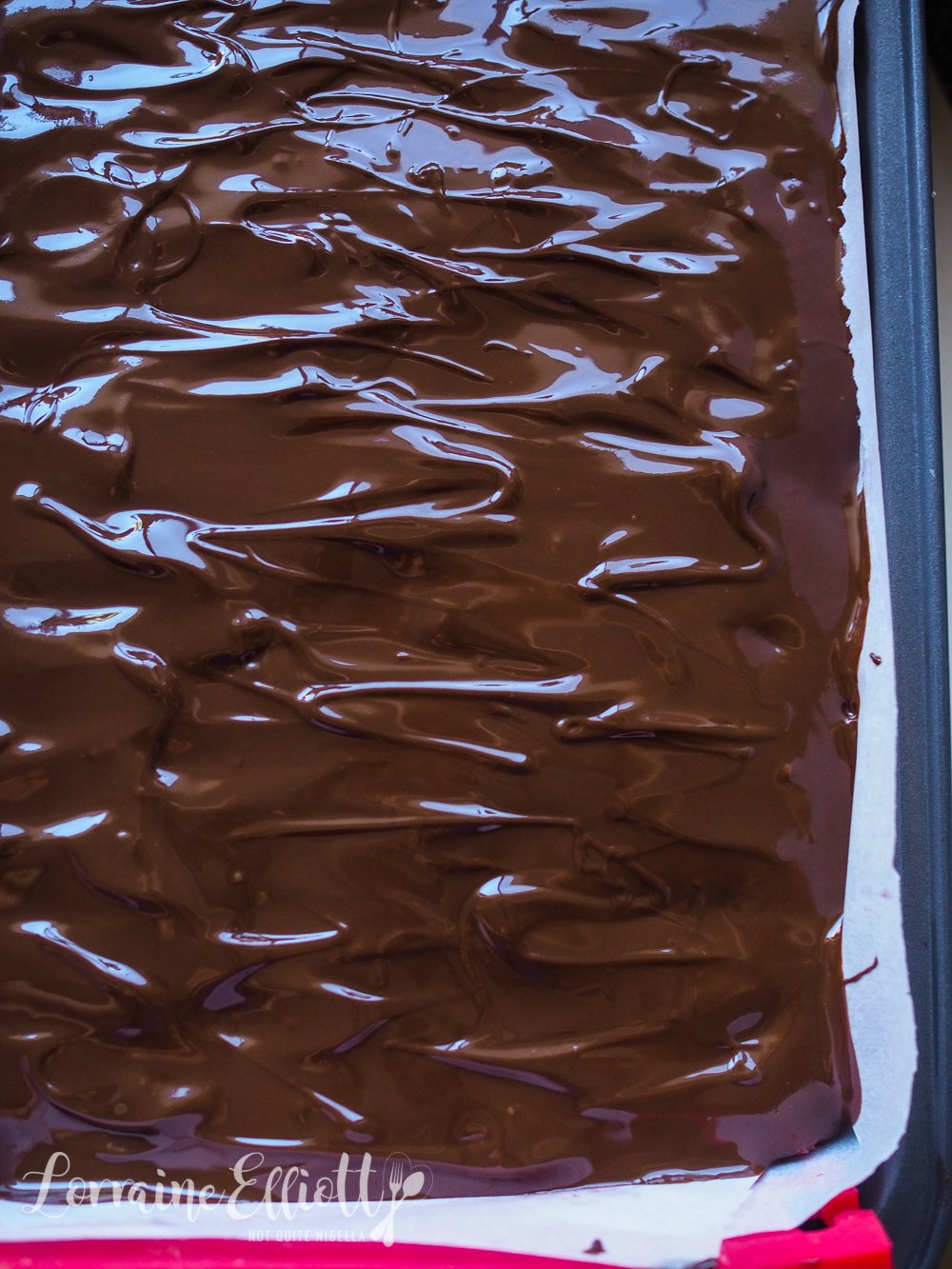