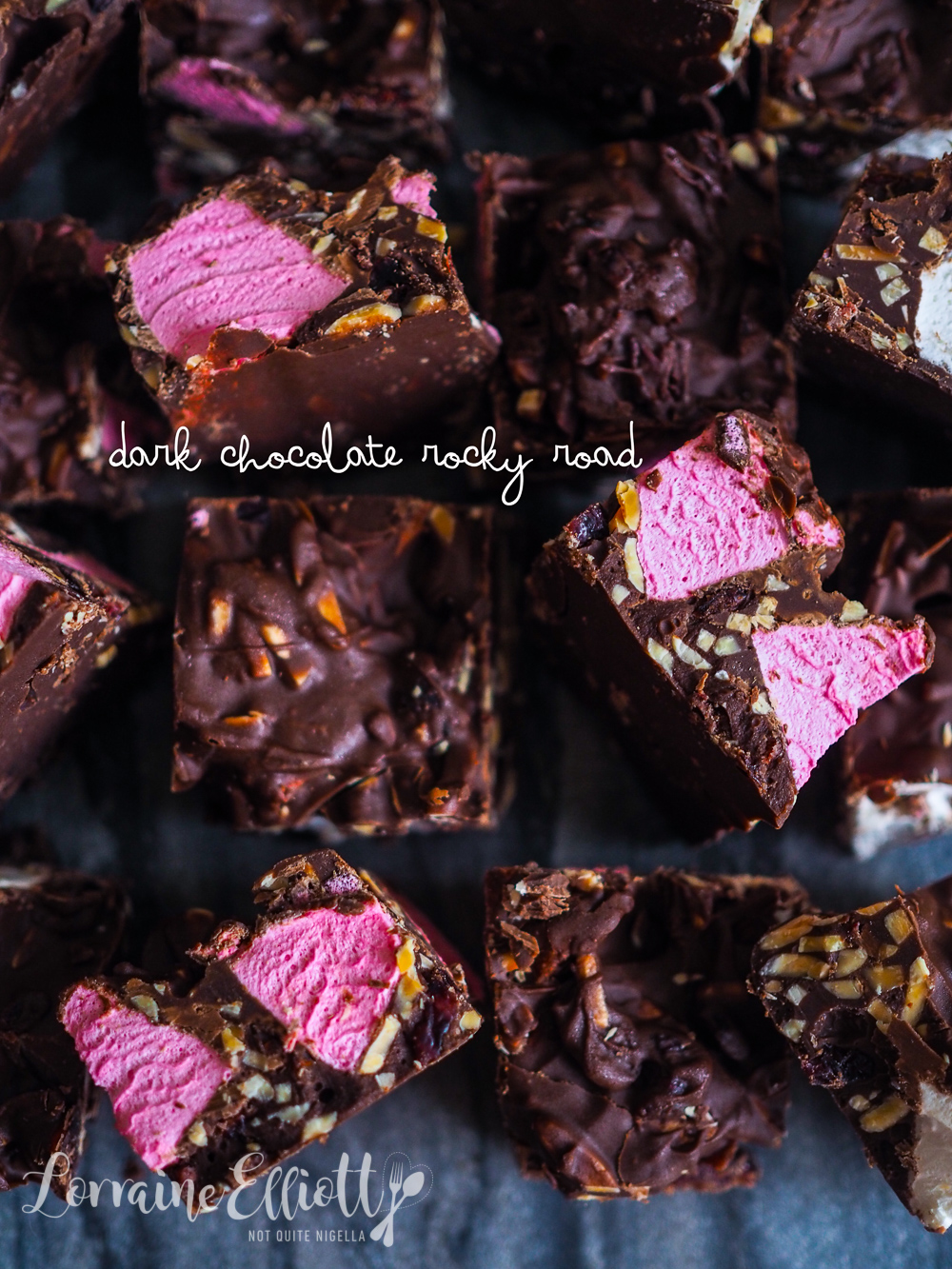 This Rocky Road is a wonderfully easy but moreish version with just four ingredients. There's bittersweet dark chocolate, roasted almonds, dried cranberries and raspberry flavoured marshmallows! It has just the right amount of sweetness without it being overly sweet or rich. It takes about 5 minutes prep time too!

Rocky Road is such a delicious treat and really one of the best original tray bakes or slices because it is easy to make and yet can feed many. I've said that this makes 9 squares although you can cut this bigger or smaller depending on how many people you are giving this to. 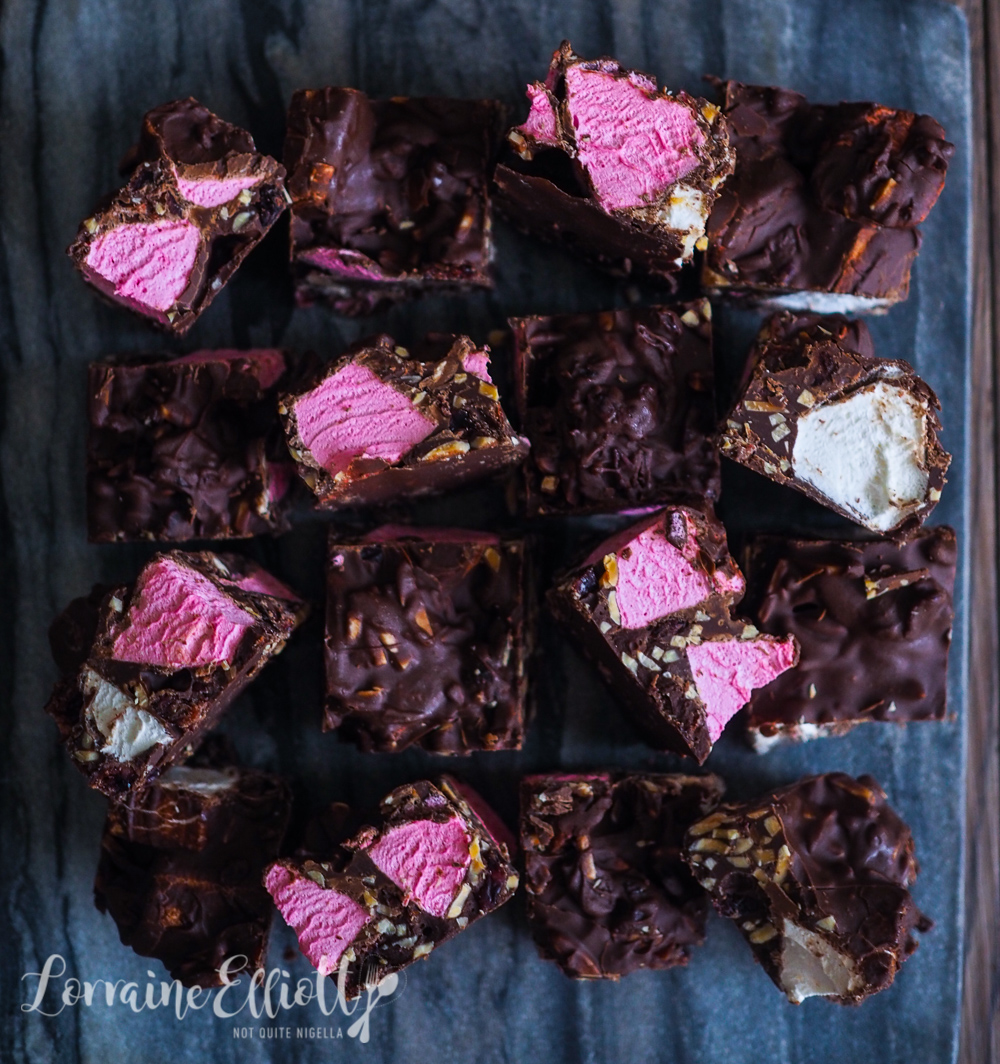 Did you know that Rocky Road is said to have originated in Australia around 1853? It was said to be a way to use up confectionary that had spoiled on its way to Australia from Europe while the name was given because of the long and difficult road to the gold fields.

However in America the history is much more complicated. In 1929 an German immigrant to America called William Dreyer and his business partner Joseph Edy made a version of it in their Oakland California business. 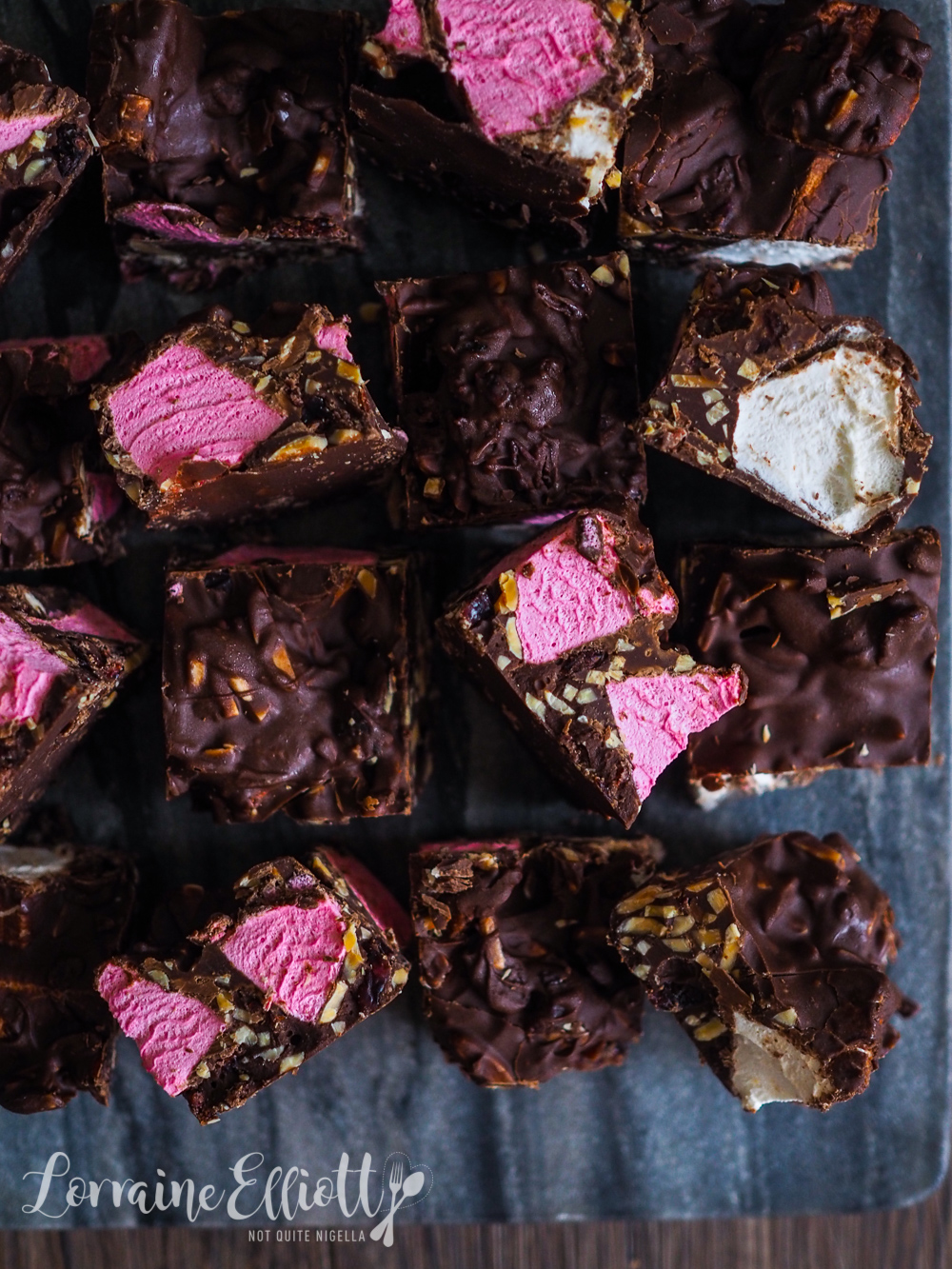 Also Oakland around the same time Eldridge Seth Fenton founded Fentons Creamery and he claims to have invented it but this is contested by a staff member and candy maker George Farren who was friends with Dreyer and Edy. So while the making of this treat is simple, its history is anything but!

We are being very careful with chocolate with little Teddy around. It means that we are somehow forced to eat all chocolate quickly! ;) You see we had a bit of an incident with Teddy and chocolate. After dinner one night I gave Mr NQN some peanut butter filled chocolates and he said he would eat them later and put them on the coffee table in front of him. During that time Teddy was scampering around playing with his balls and then suddenly he ran into his "apartment" aka his crate. His body language usually gives away when he is being naughty. I looked down at the plate. "Did you eat the chocolate?" I asked Mr NQN. 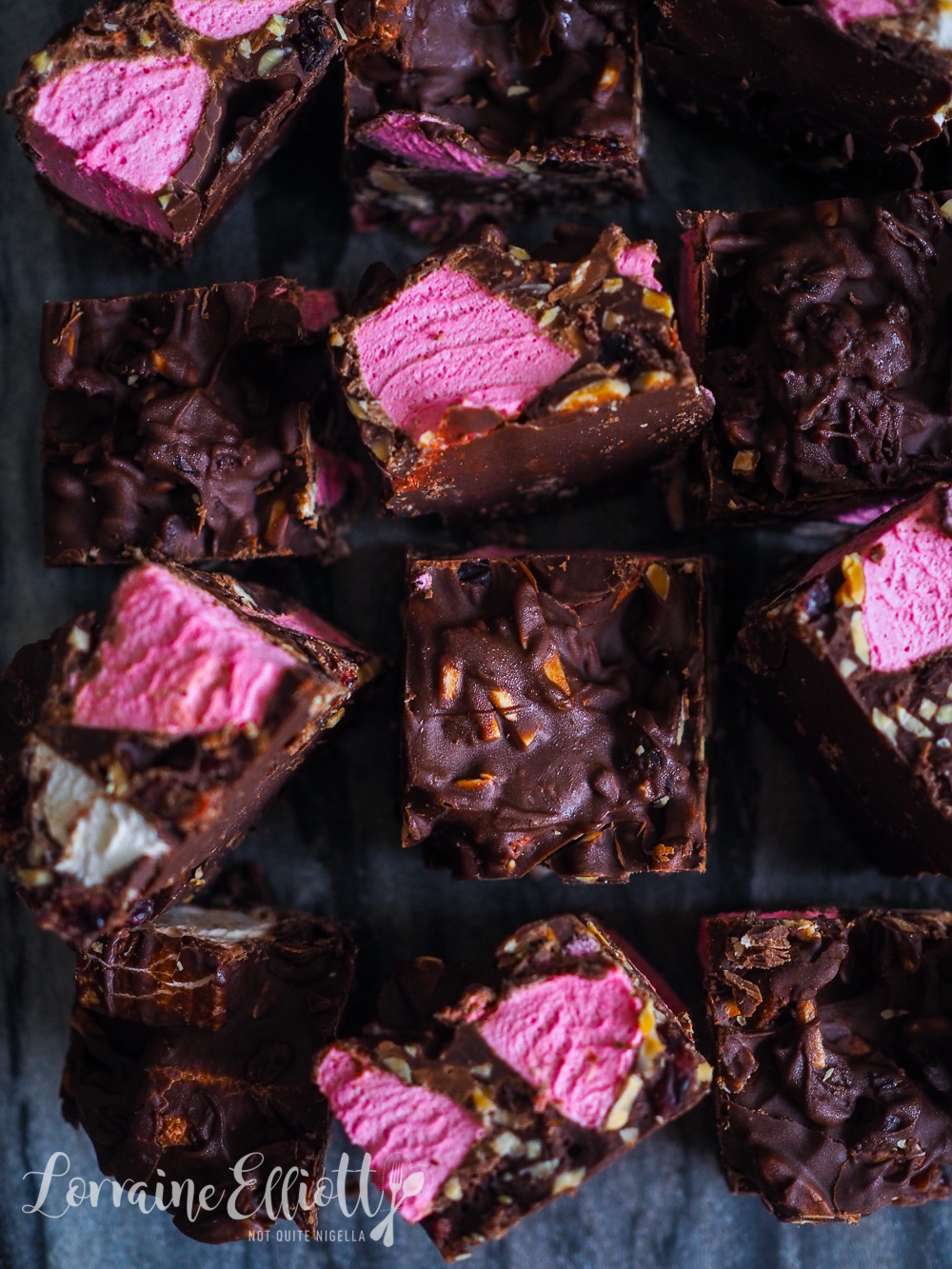 "NOOOO oh my god Teddy!" he said springing up. He grabbed Teddy who was chomping on something in his crate and took him to the bathroom to try and extract it from his mouth. His fingers dug around Teddy's mouth and couldn't find anything. Unfortunately there was a bit of blood in the saliva as he pulled his fingers from his mouth.

We were about to head to the vet when we had a look in his crate and there was the chocolate, all six squares of it intact! It was good in that we didn't have to take him to the vet but Mr NQN felt terrible about traumatising Teddy because Teddy is his life. After that, he was a bit wary of Mr NQN. He slept next to me and it took a few days of gentle coaxing from Mr NQN before we got a confident Teddy back! And no doubt he would definitely try and steal peanut butter filled chocolate again.

So tell me Dear Reader, do you like rocky road? Do you prefer it with dark or milk chocolate? 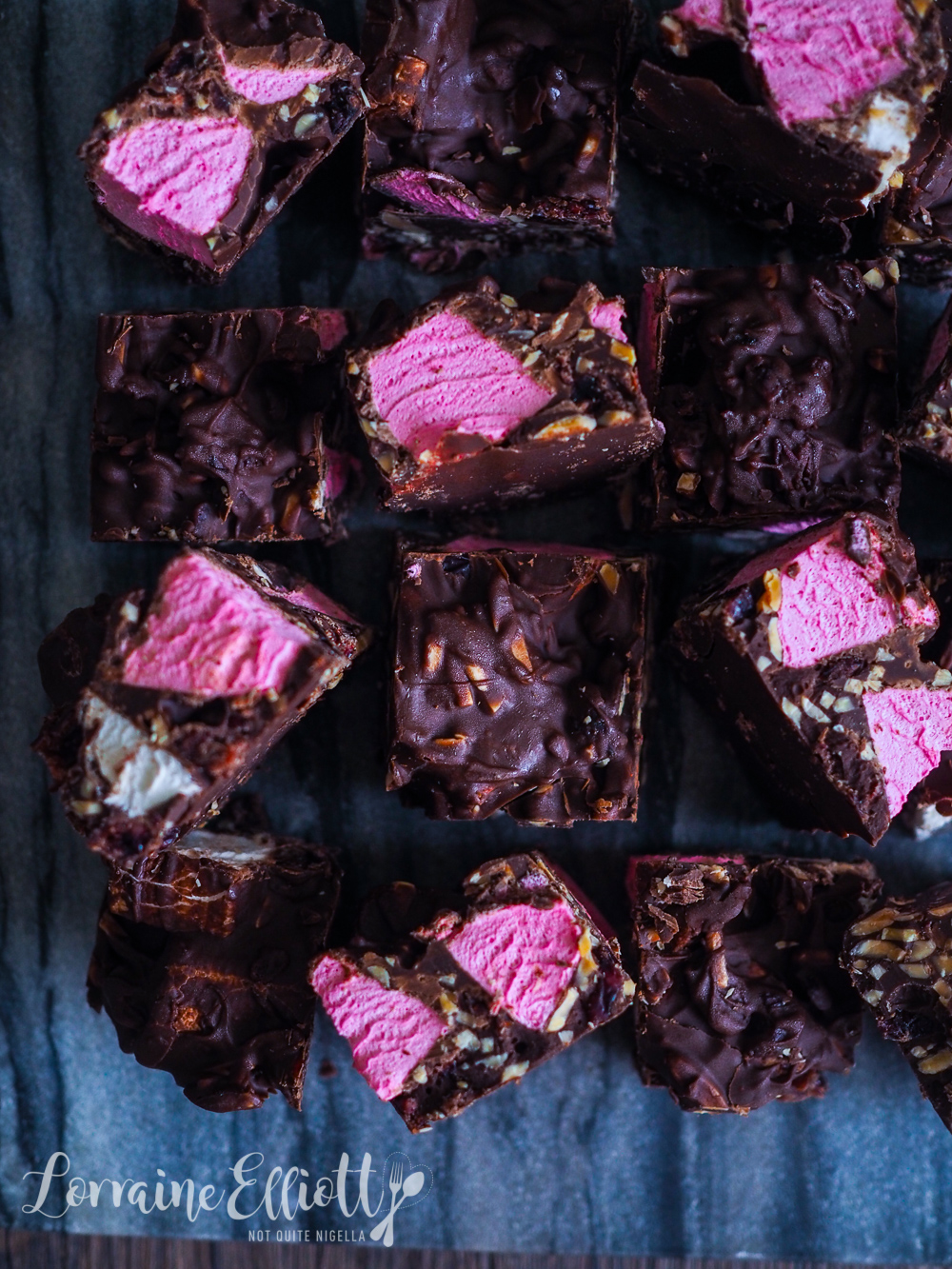 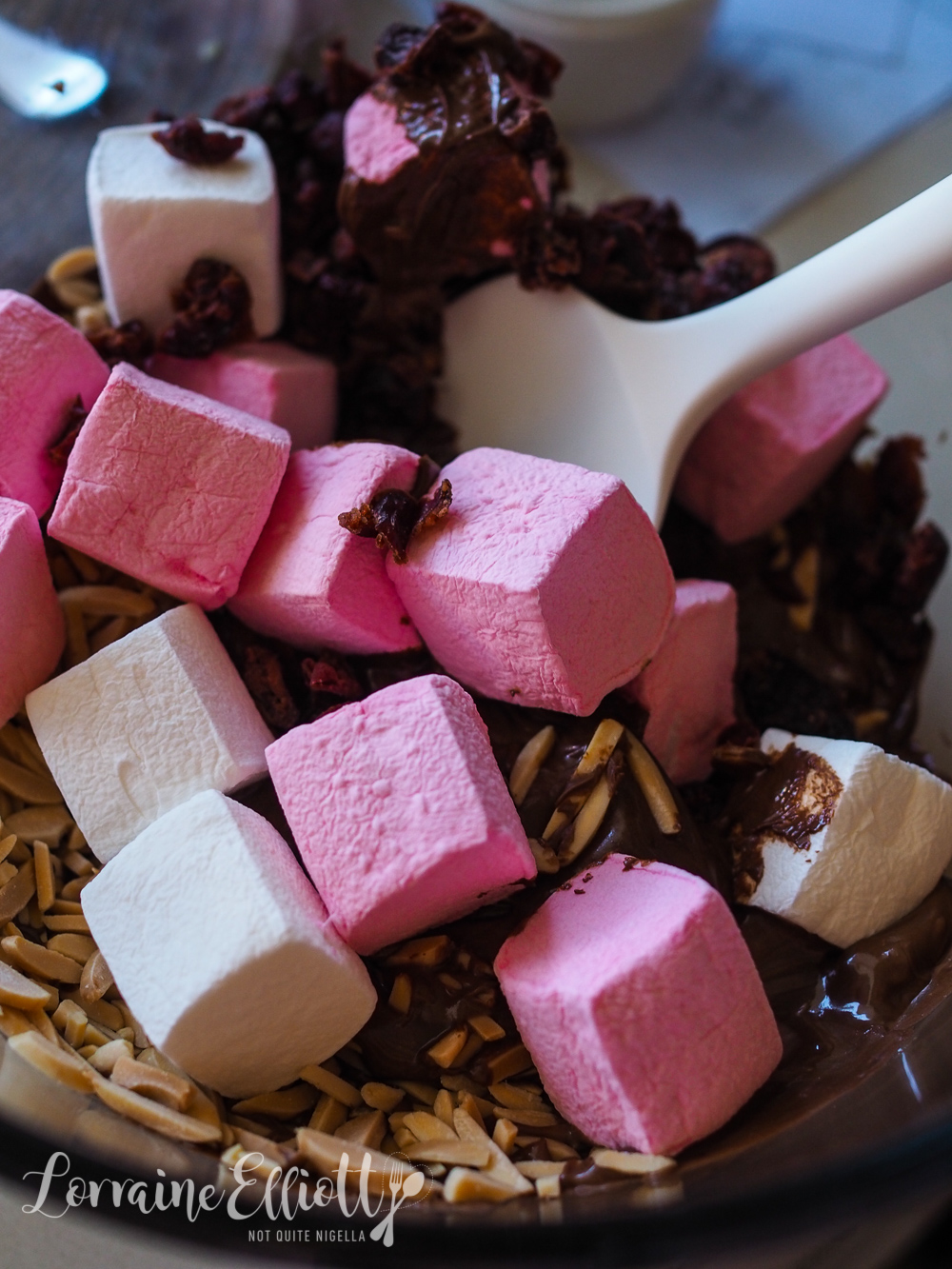 Step 1 - Line a 20x20cm/8x8 inch square tin with parchment on the base and sides. Melt the chocolate in a double boiler or in a microwave. Mix in the almonds, marshmallows and cranberries. 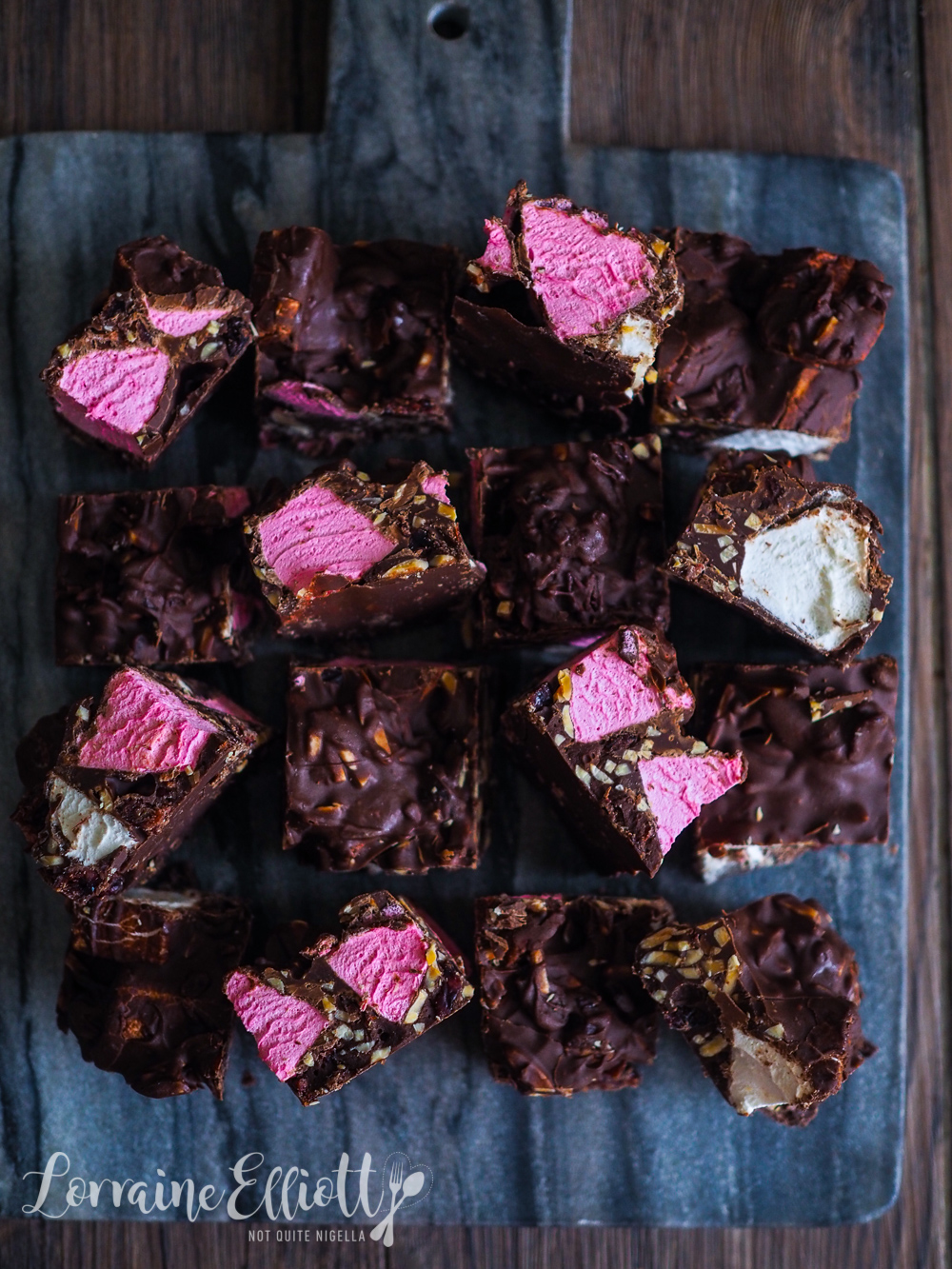 Step 2 - Spoon into the prepared tin. Allow to set in the fridge and cut into squares.