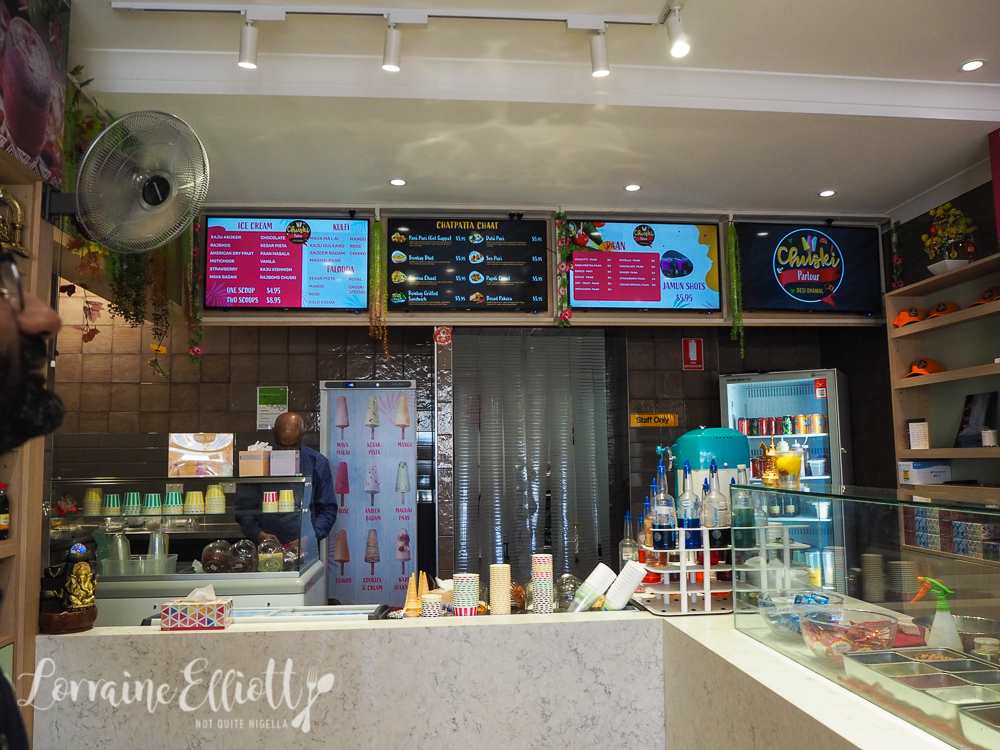 Chuski Parlour is an Indian sweets shop that specialises in paan and chuskis. Indian Ices or chuskis are a popular shaved iced treat. They come in flavours like kacha aan (green mango), falsa (blackcurrant), butterscotch and black cherry. 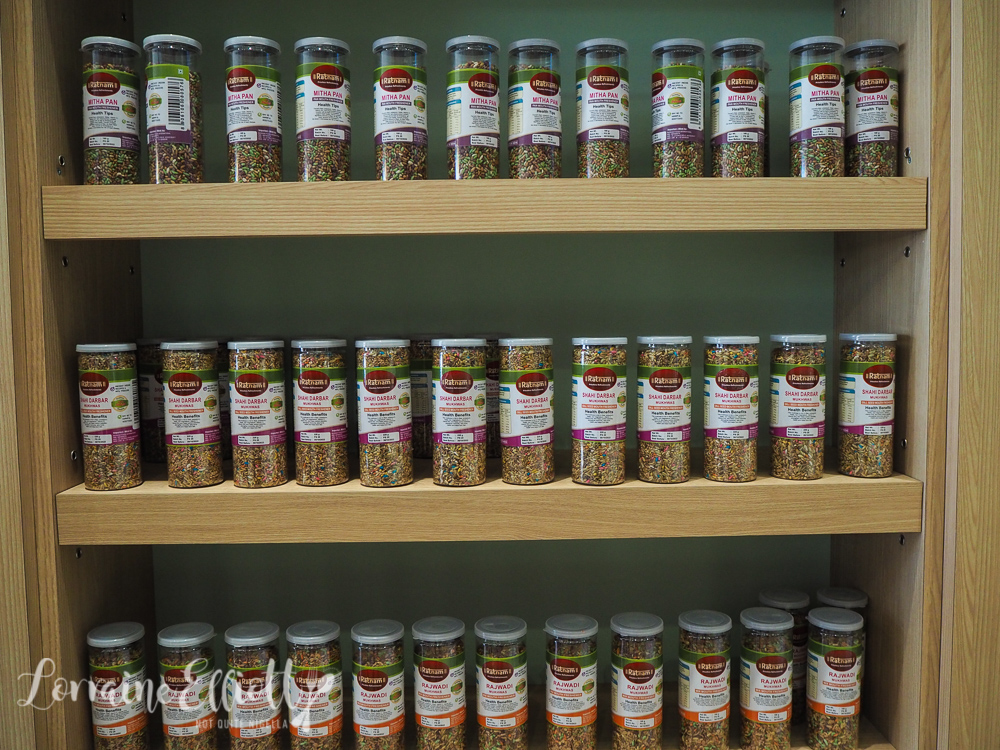 "Whatever you do, don't look up what Chuski means," says Saagar.

A little earlier we had dined at an Indian restaurant (Itihaas in neighbouring Parramatta) and when it came to dessert Saagar leaned in and said, "Are you interested in trying another Indian place for dessert?" 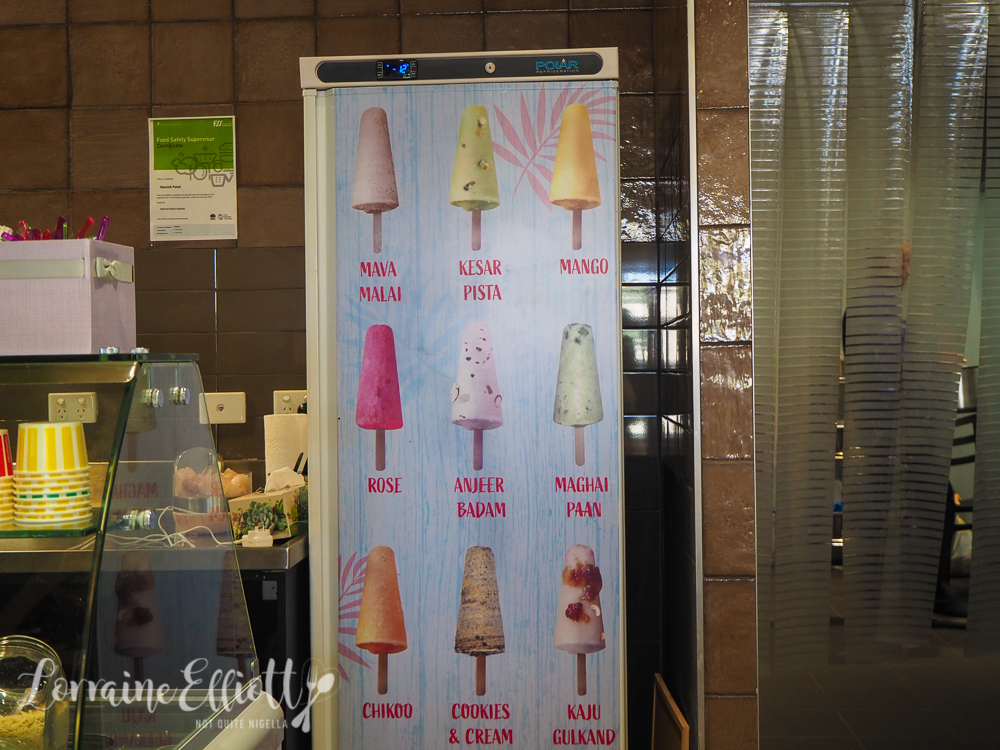 My life motto is to try everything food-wise and we hopped into our cars for the short drive to Harris Park. 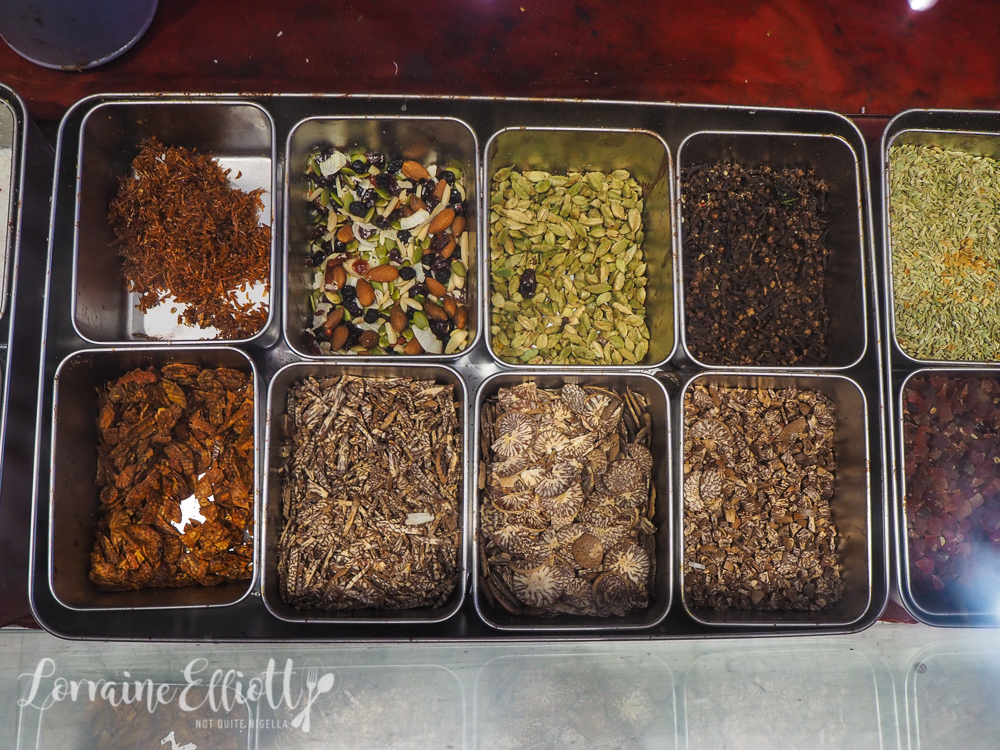 Chuski (pronounces Chooski) is a colloquial and somewhat derogatory word for sucking something or licking it and it's usually used in "casual" conversation so you're unlikely to use it with your parents in the room if you know what I mean ;) 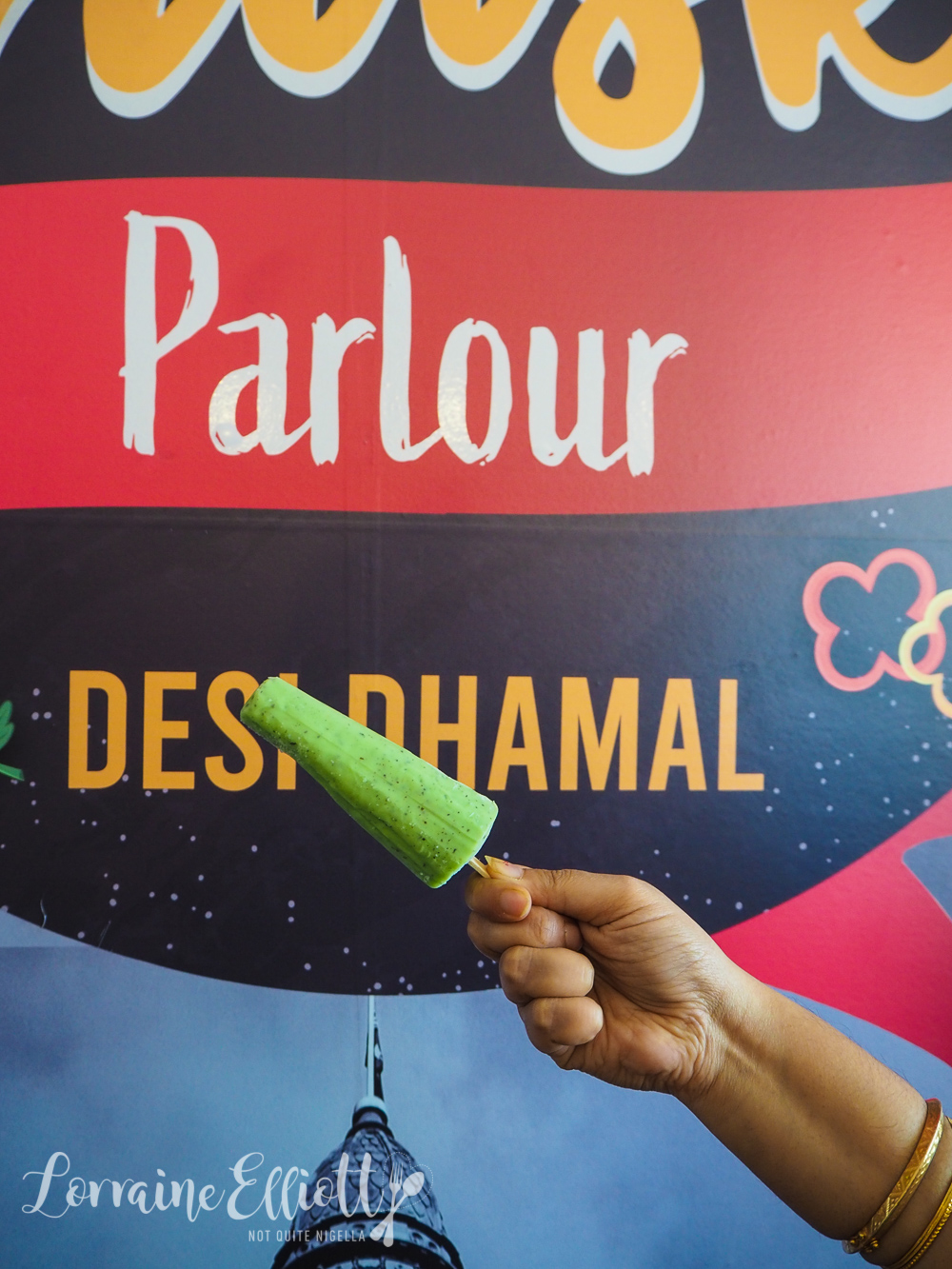 Paan is a betel leaf post dinner snack that comes with a variety of fillings. For those new to paan, a sweet pan is probably the best way to start on it as the betel nut is bitter, addictive and strong in flavour especially with slaked lime (chuna) paste. Paan is most commonly eaten after dinner and can be a bit of an acquired taste. 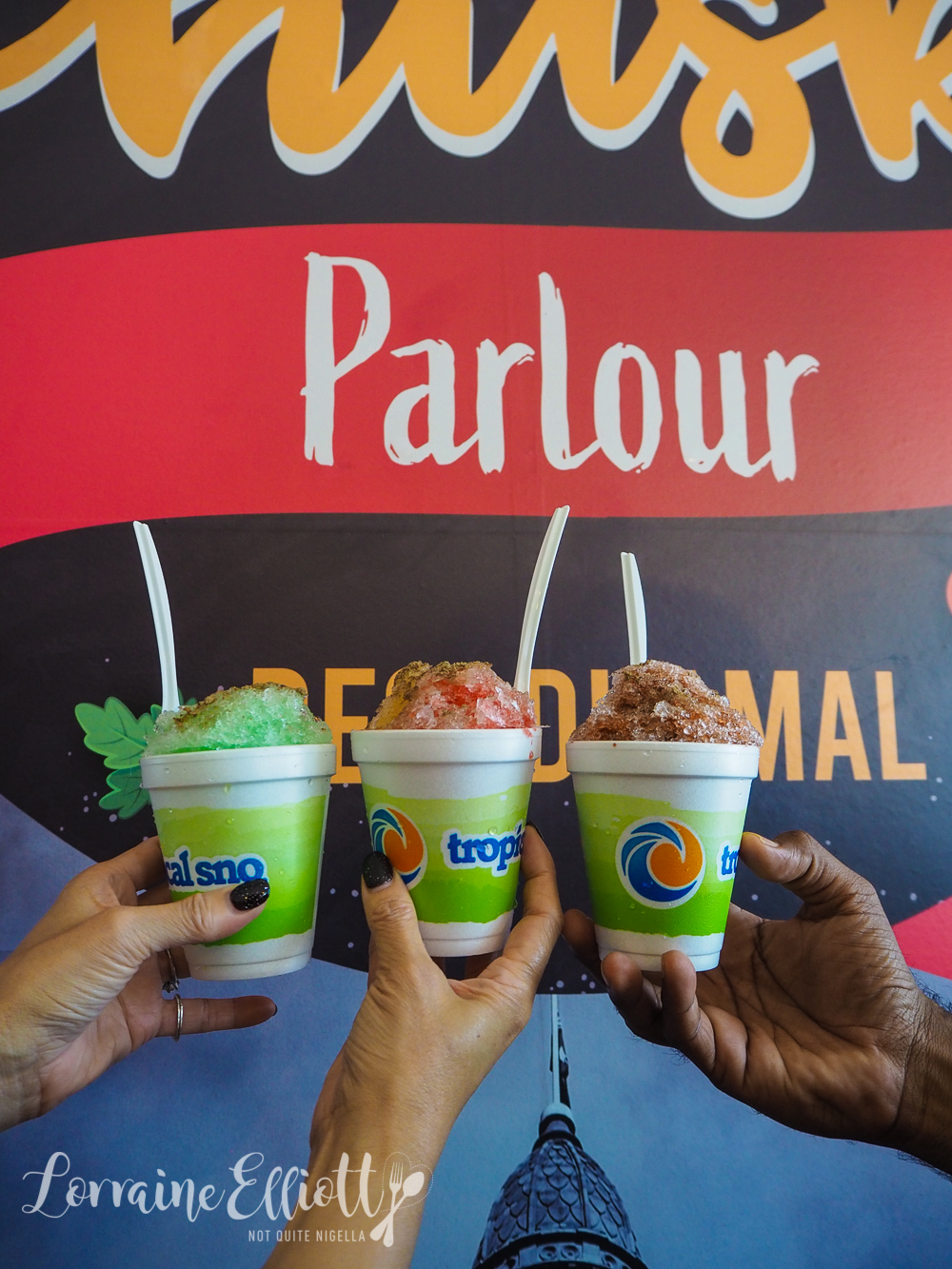 With the chuskis or ices you can get a couple of flavours in each one and Saagar explains what each one is. Some of them have names in English while for others we need a bit of explaining eg Falsa (blackcurrant), Kacha Aam (green mango) and Nimbu Masala.

Saagar explains, "Nimbu masala is lime and masala - although we call both lime and lemon nimbu, one is cheaper than the other and so used more often and that would be lime. Lemon is relatively more expensive in India and is mostly a more upmarket thing. Just like everything in India, poorer families and poorer juice stalls use lime and the upmarket ones use lemon."

We choose a variety of them with combinations of raw or green mango and lime; mango and blackberry; kala katta (which means black sour that tastes like Cola) while Ahana orders a Paan kulfi. 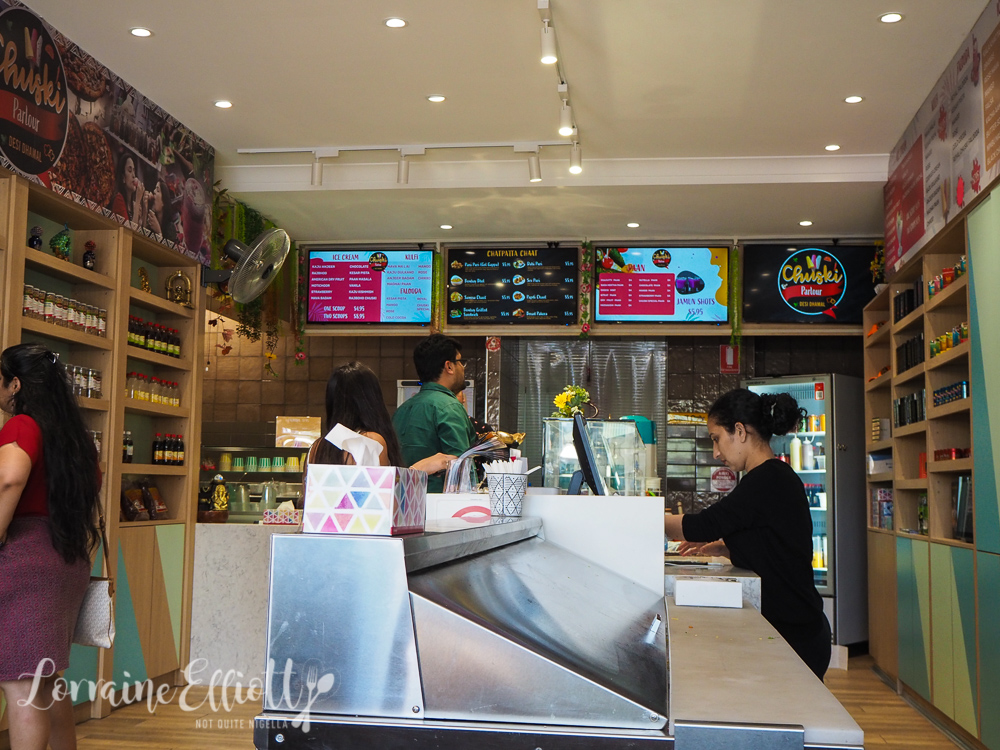 On top of the ices they sprinkle some chaat masala which is a fragrant, spicy and sour topping designed to enhance the sweetness of food and is a common topping on fruit. Chaat masala's main flavour is from amchoor (dried mango powder) along with spices like cumin, ginger and pepper as well as a sulfuric asafoetida or hing. On this warm day we sit and scoop our ices and cool down.

So tell me Dear Reader, when someone tells you not to look something up, do you look it up? Have you ever had a chuski?