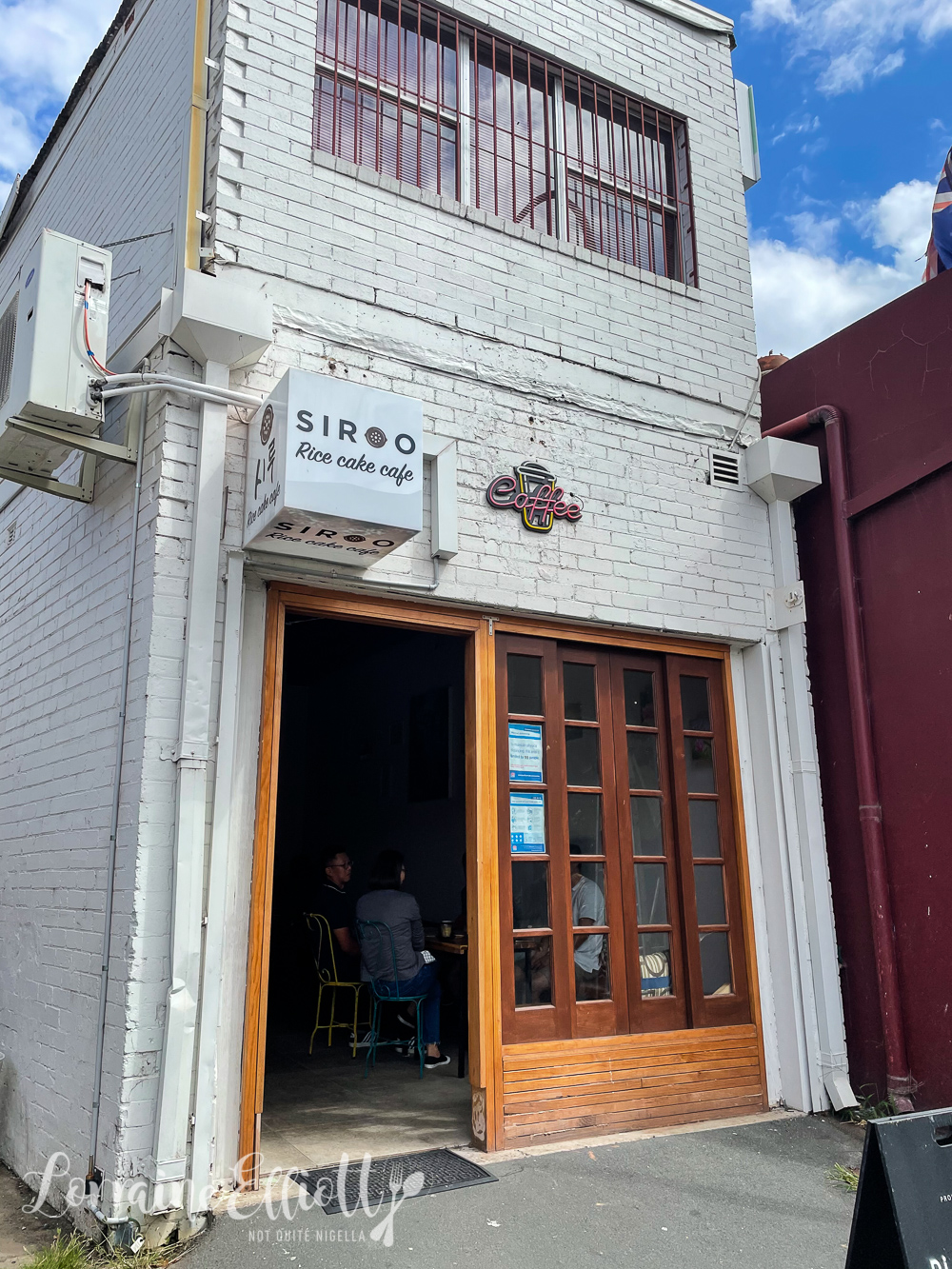 Siroo Rice Cake Cafe is a cafe that serves rice cakes or tteok. Located in West Ryde, it's a popular cafe and Sydney's first and only rice cake cafe or bangatgan. This family run business starts early to ensure that customers get fresh mochi and rice cakes every day. They sell a range of over twenty tteok as well as four bingsus or shaved ice desserts. 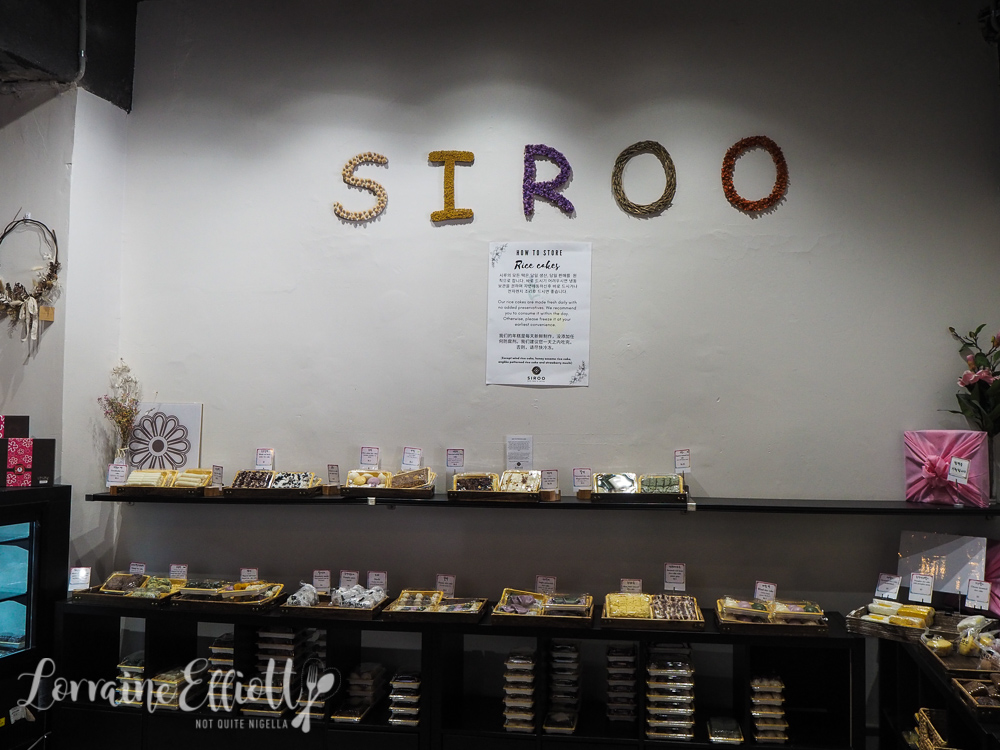 So what are tteok or rice cakes? They're sticky, stretchy and delicious cakes made using glutinous (mochi) and non glutinous rice flour that gives it a signature stretchy texture. Tteok are shaped and filled and then steamed and usually served at room temperature. Siroo is the name of the pot used to steam the rice flour before being shaped and formed. 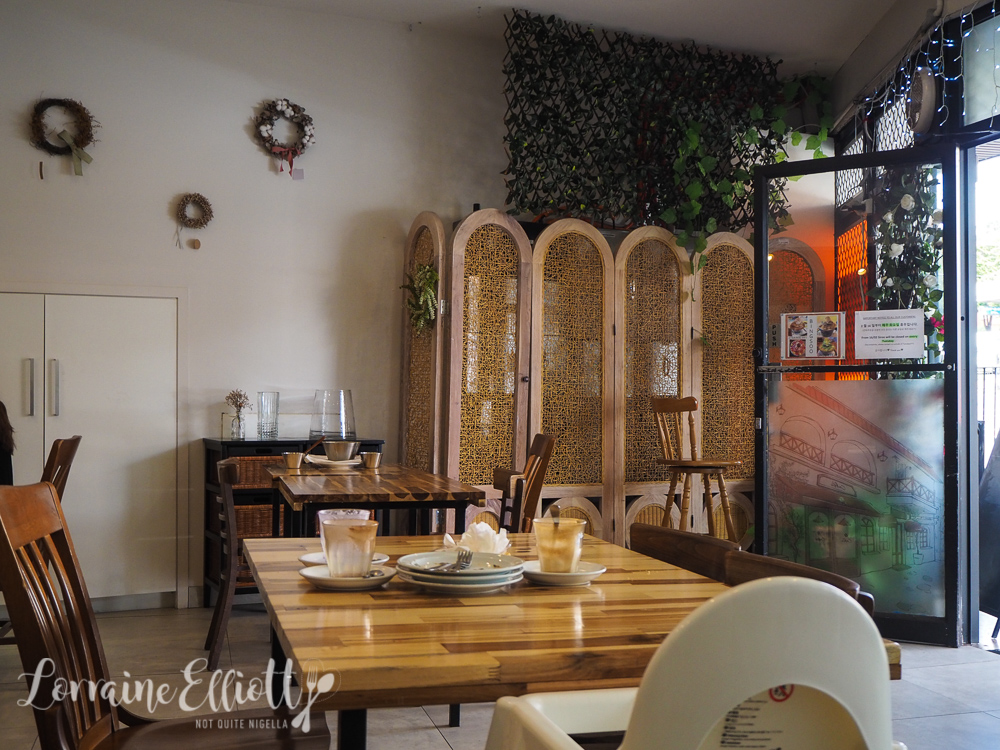 The thing about Siroo Rice Cake Cafe is that you've got to think of mochi or rice cakes differently than a sweet snack. Koreans eat tteok like people in Western culture eat bread. It is a vital part of the diet and it can be eaten sweet or not sweet (although it doesn't quite verge into full savoury). 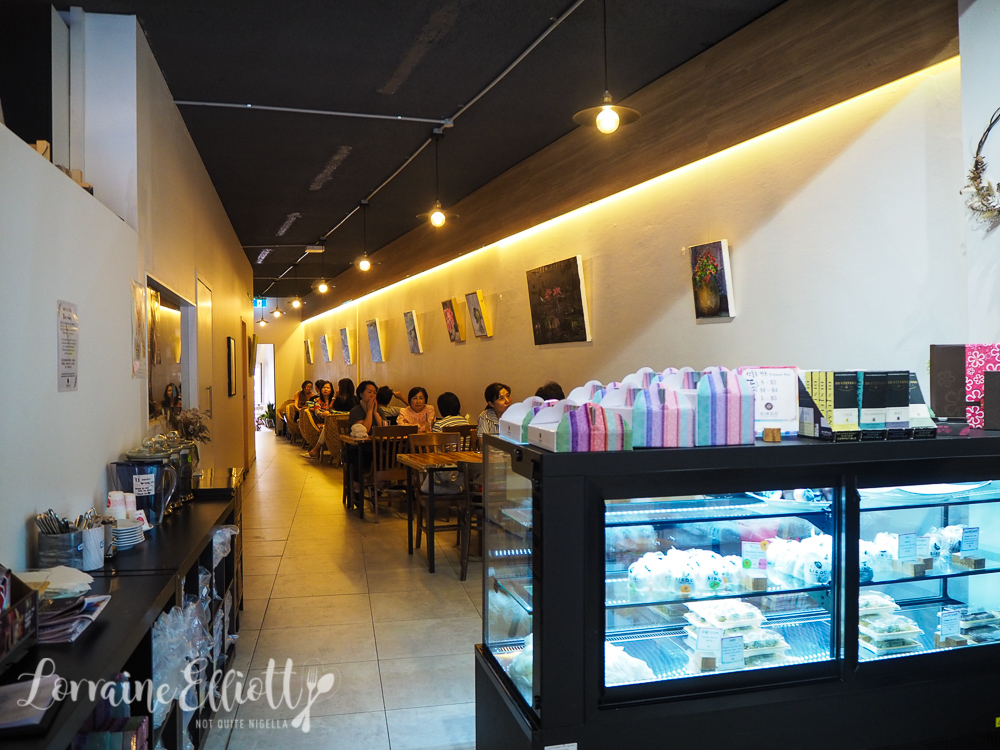 When Monica and I arrive we realise (as we entered through the back entrance) that it's a surprisingly large cafe with a gamut of age groups. There are mostly couples or groups (rather than solo diners) all having drinks and eating mochi and bingsu, the shave ice dessert. 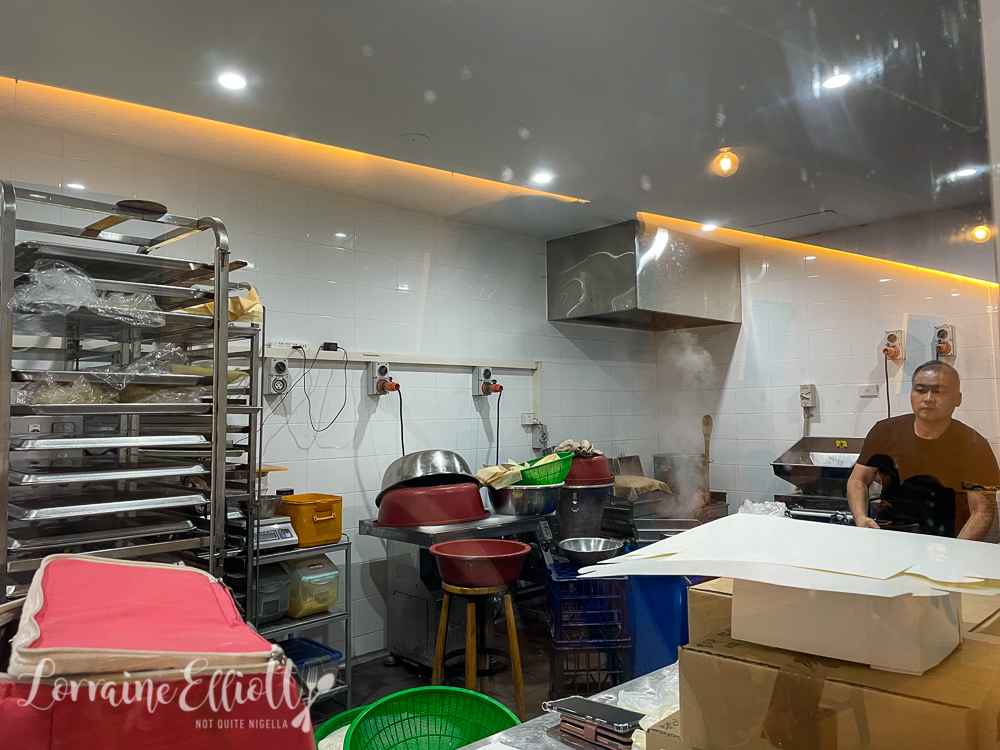 That's because tteok is a social food often shared with friends, neighbours and relatives, a breaking bread of sorts as well as a celebratory food to signal festivals and happy times in the year. Fancy boxes line the display ready for people to buy tteok as gifts. 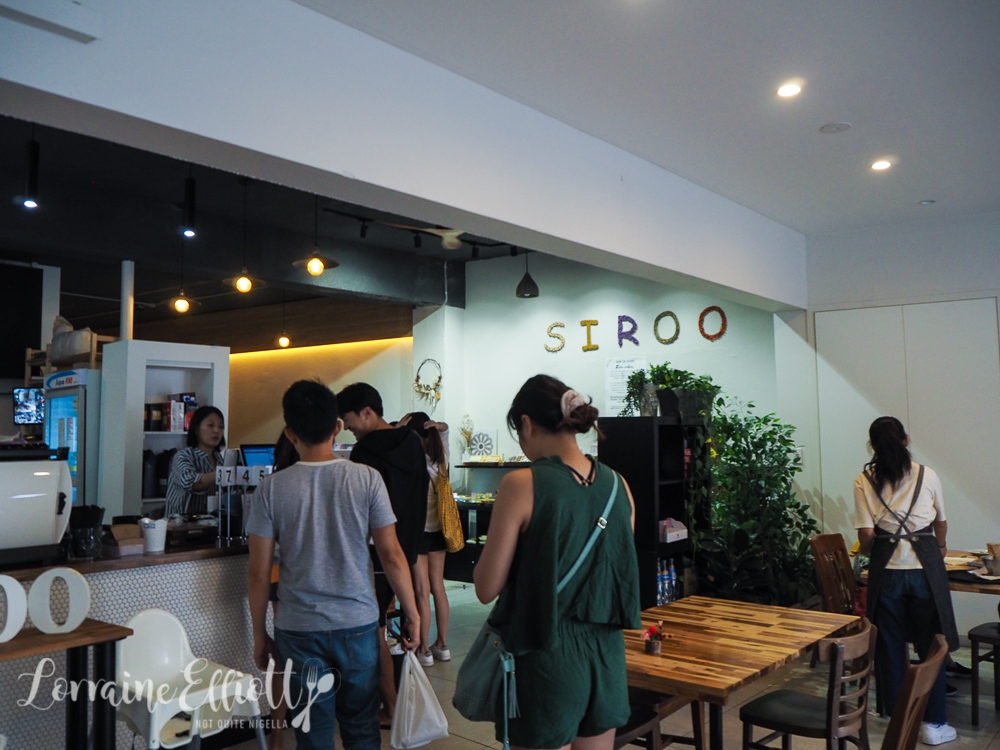 There isn't a menu as such for food (drinks are on the board above). Diners order drinks and then choose their rice cakes from the display and buy them to eat there. Serviettes, cutlery and water are all help yourself. 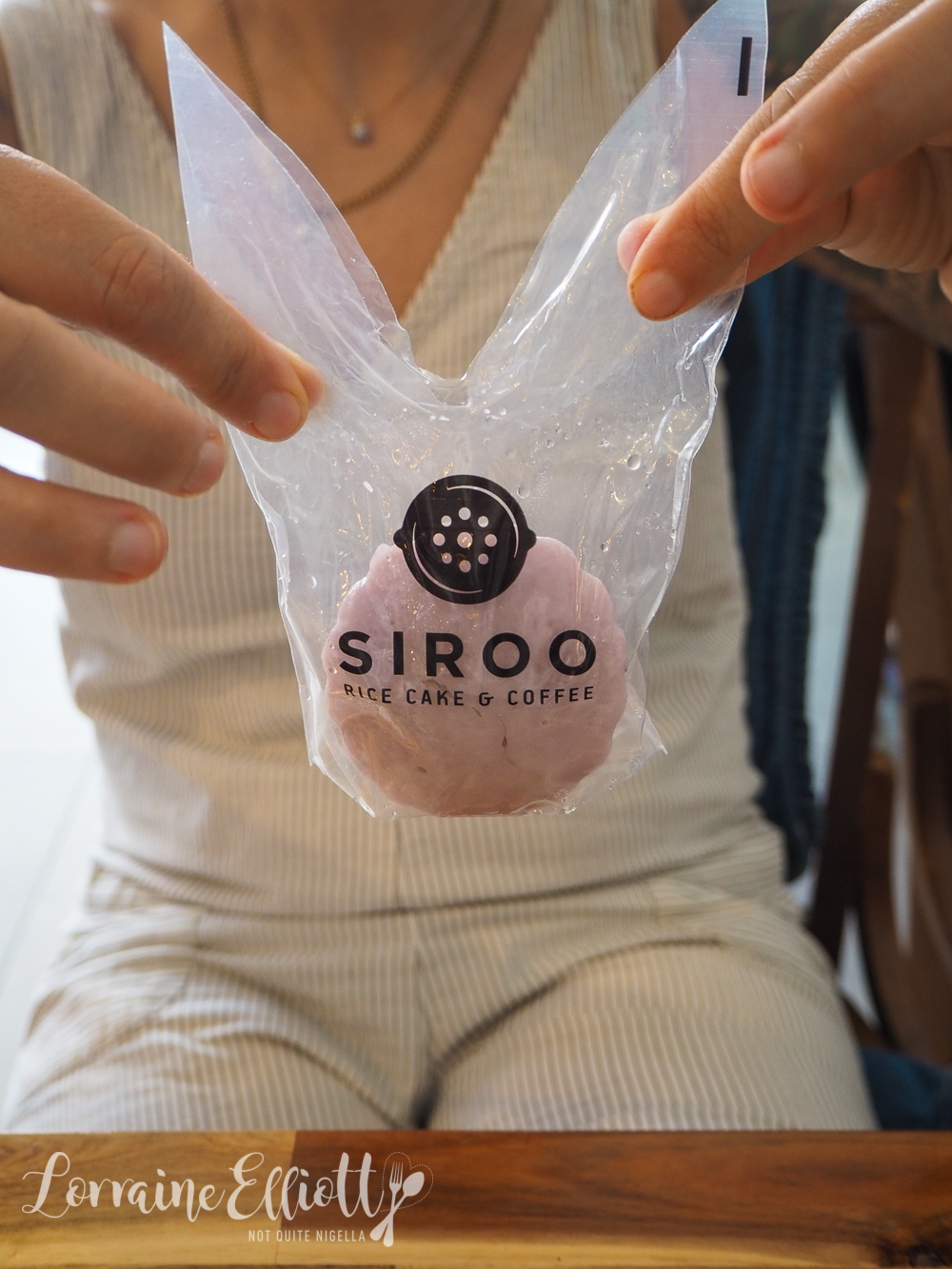 Tteok, like bread, need to be made daily and the couple that own Siroo Rice Cake Cafe Kilyang Ko and Changhyun Lee, start at 5:30am. In the back of the cafe we can see pots steaming away. 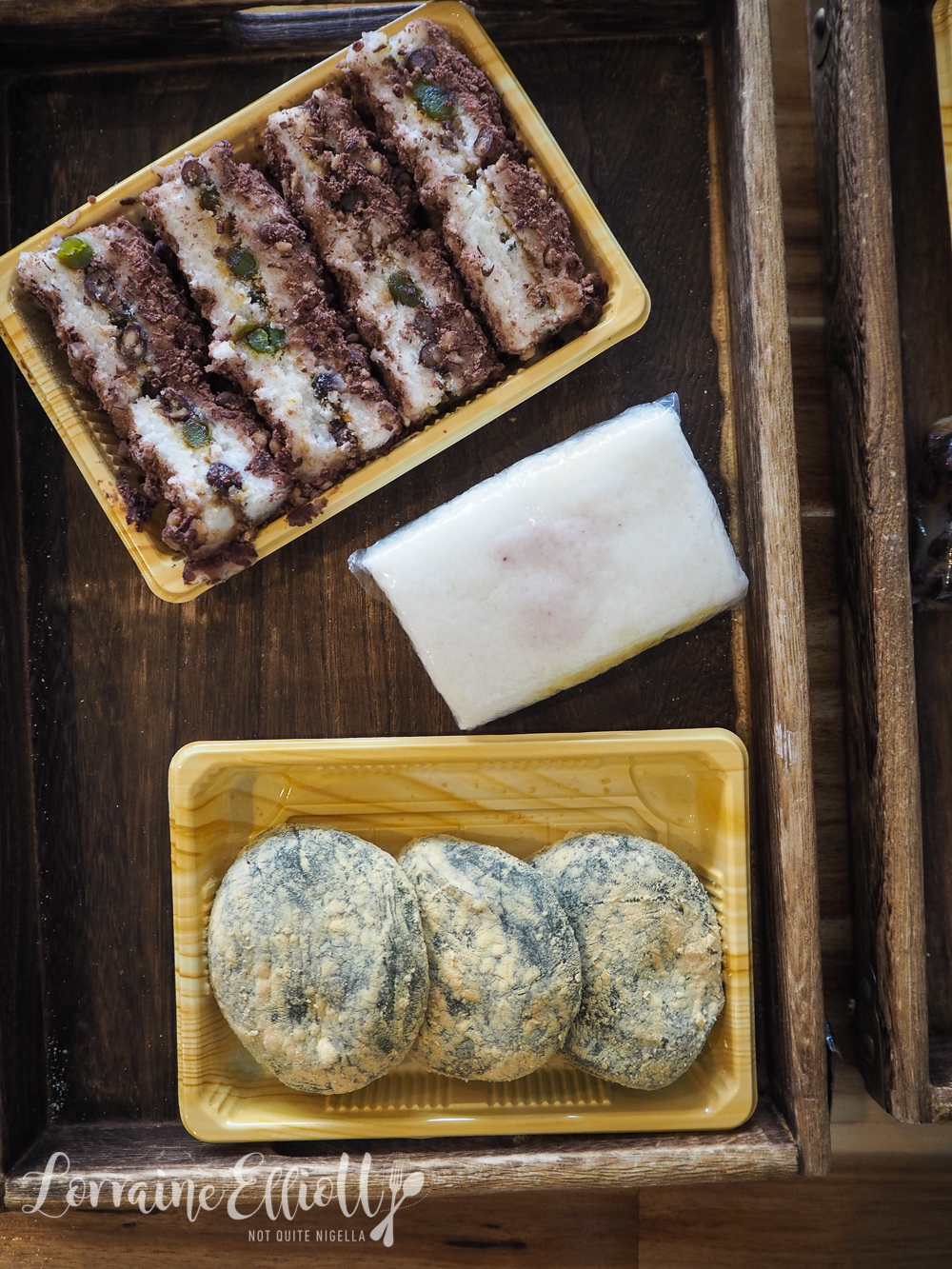 We grab a tray and fill it with a selection of mochi including ones with mugwort and mung beans. There's a caramelised sticky rice as well as steamed red beans with peas and angko patterend rice cakes. By the end we have around $60 worth of tteok. 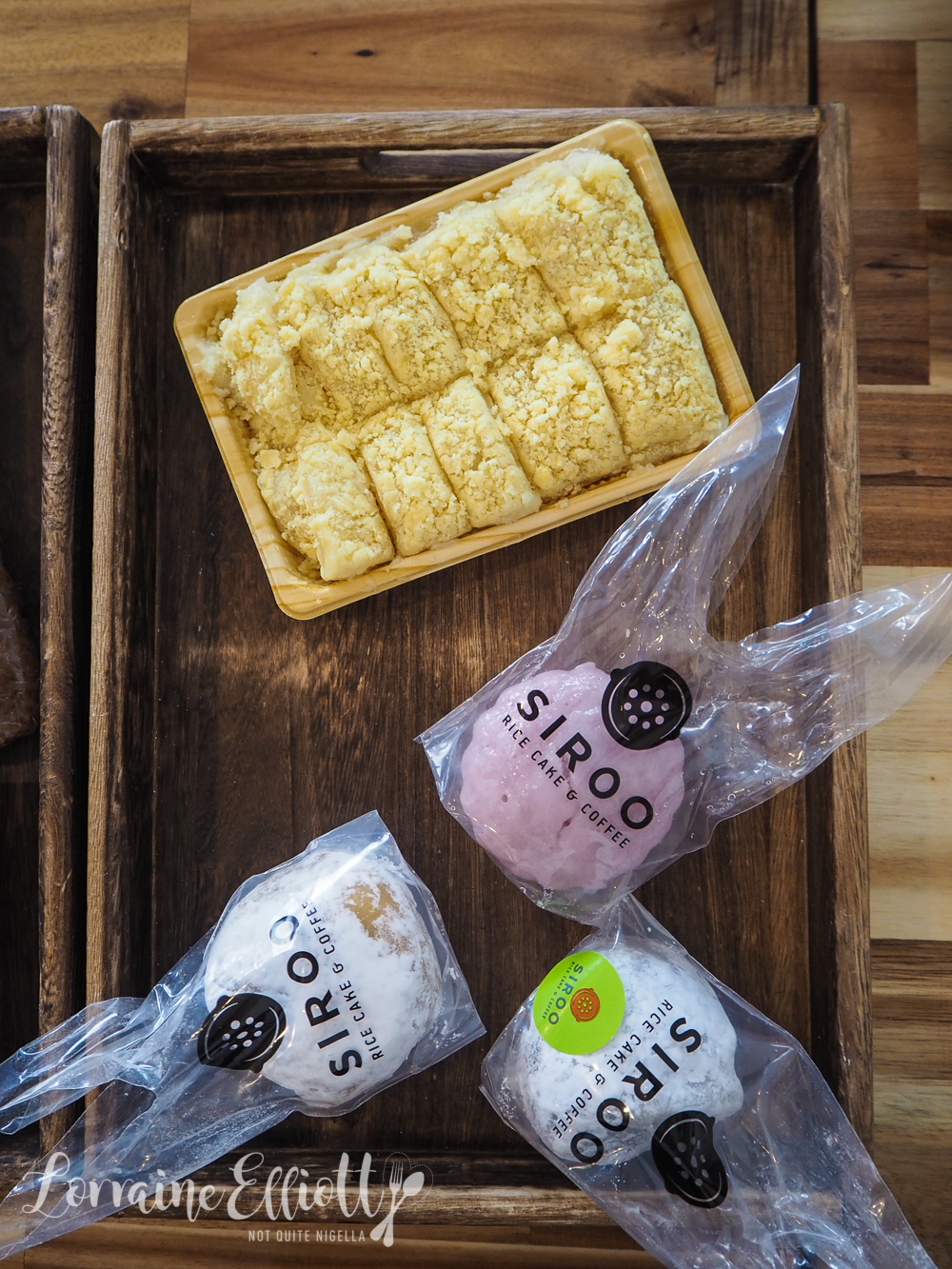 "This has got to be 300grams," says Monica weighing up a plump, gelatinous pumpkin filled mochi. Mochi is made using glutinous flour and is perhaps the most familiar tteok to non-Koreans. There are large, individual mochi filled with either red bean, strawberry and red bean or pumpkin. We try both the strawberry and red bean and the pumpkin mochi. They're larger than Japanese mochi. 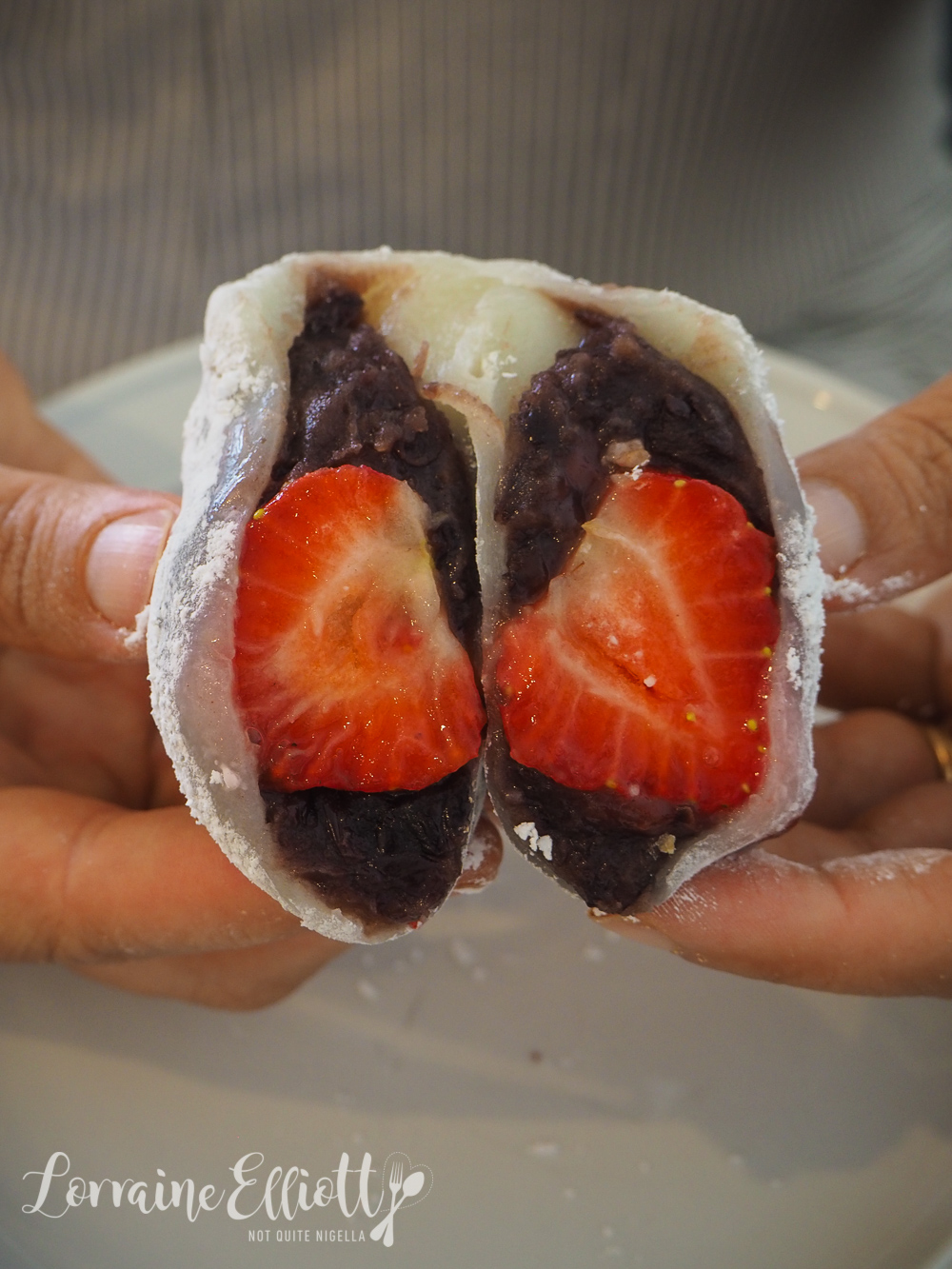 We cut the strawberry and red bean mochi in half and take a bite. The outside is so soft and fresh and noticeably so. The pumpkin one is even better and even though I usually just try a bite or two of things before passing them onto Mr NQN, I devour my plump half of the pumpkin mochi. The pumpkin filling is smooth and pure pumpkin with just enough sweetness added to it. Mochi doesn't age well so you do have to consume it on the day or it really starts to lose its elasticity and appealing mouthfeel. 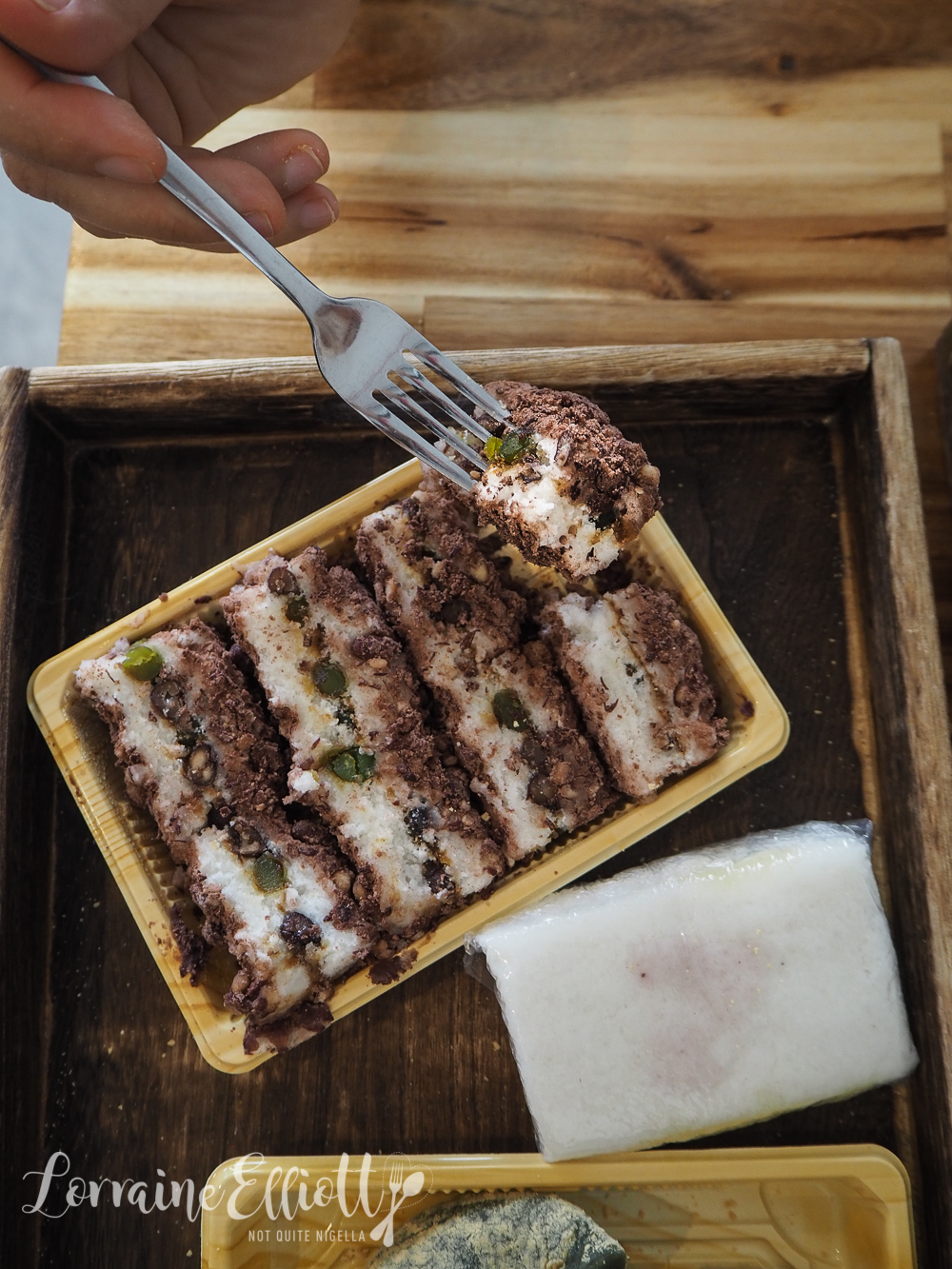 Some mochi isn't as sweet as others and these are ones like the mung bean steamed rice cake which takes on the drier texture of the mung bean powder. Likewise the steamed red bean rice cake with sweet peas looks like an intriguing sandwich but is also similarly drier in texture. 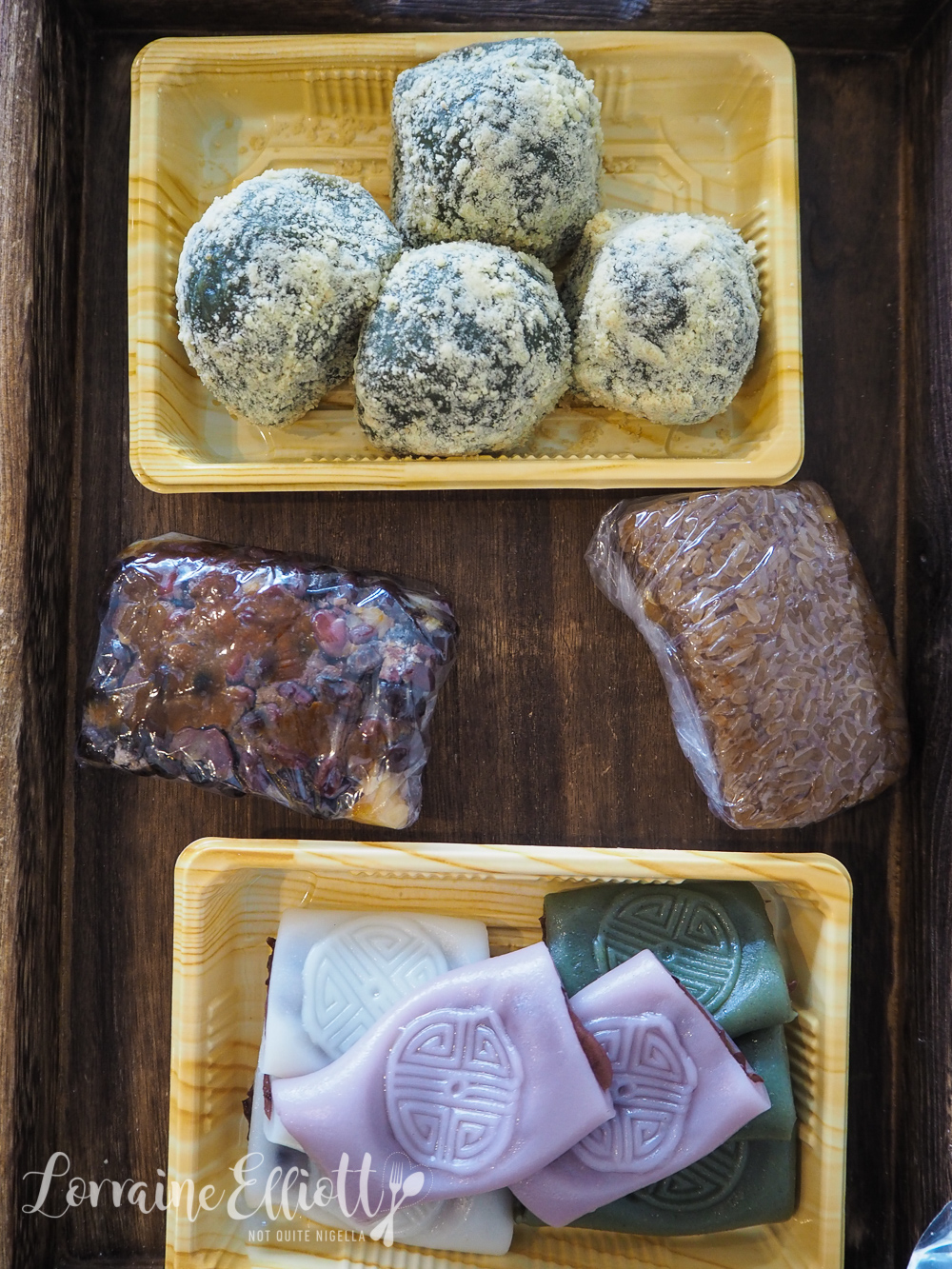 The Angko patterned rice cakes are similar to the bright red turtle ones in Nonya cuisine but these are filled with a red bean paste with sesame oil giving it a savoury aroma to it. 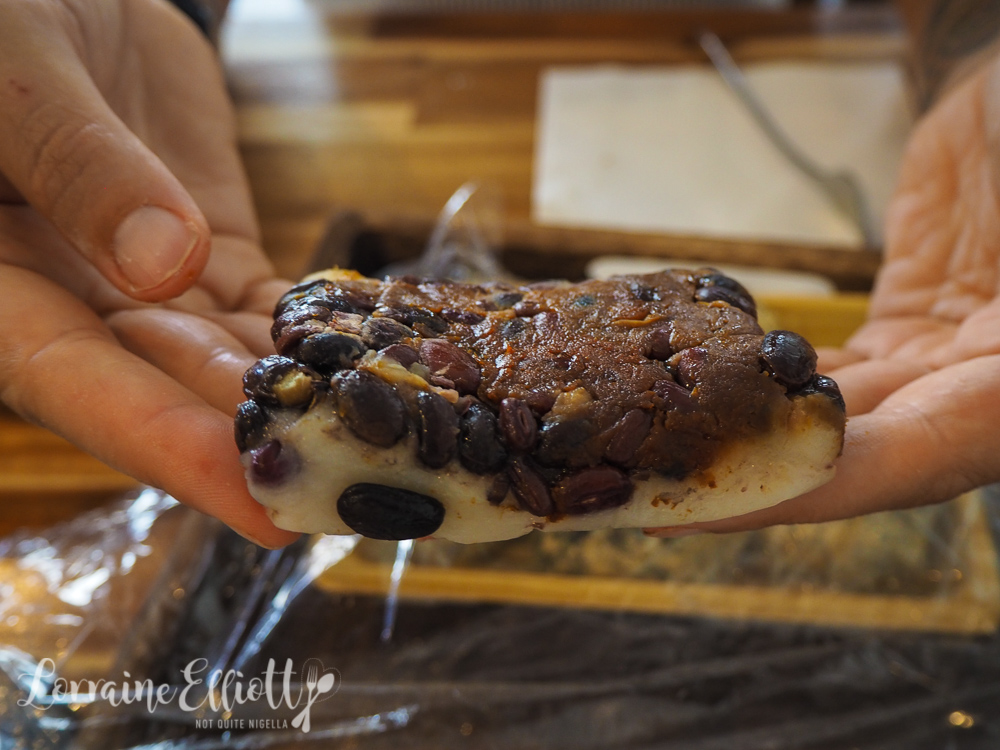 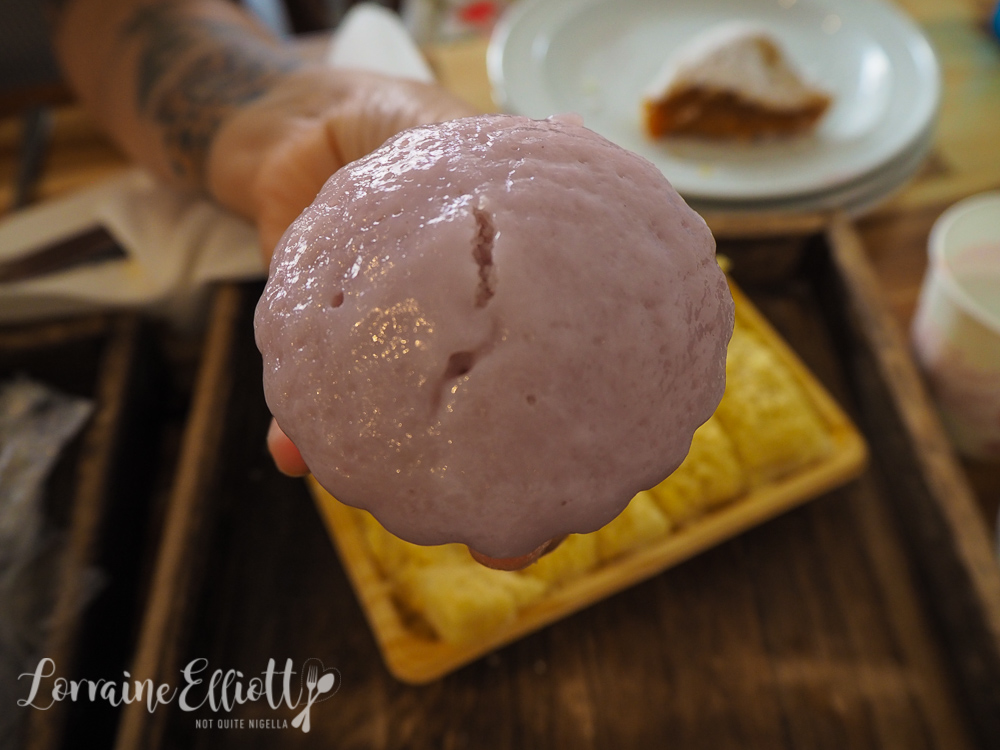 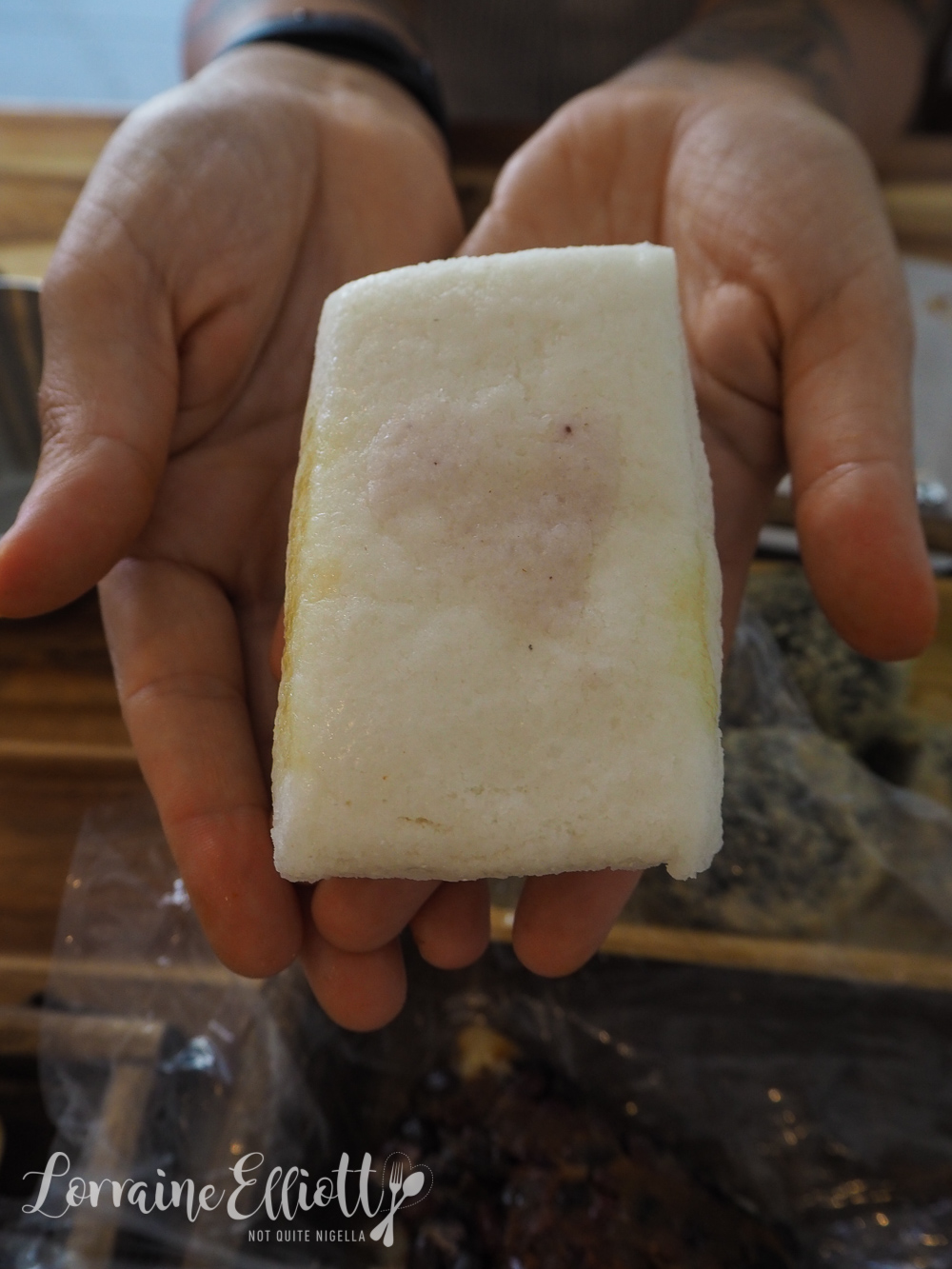 We also try a cheese steamed rice cake with a layer of mild cheese in the centre. This is firmer and less mochi like and more like a cake although not sweet. 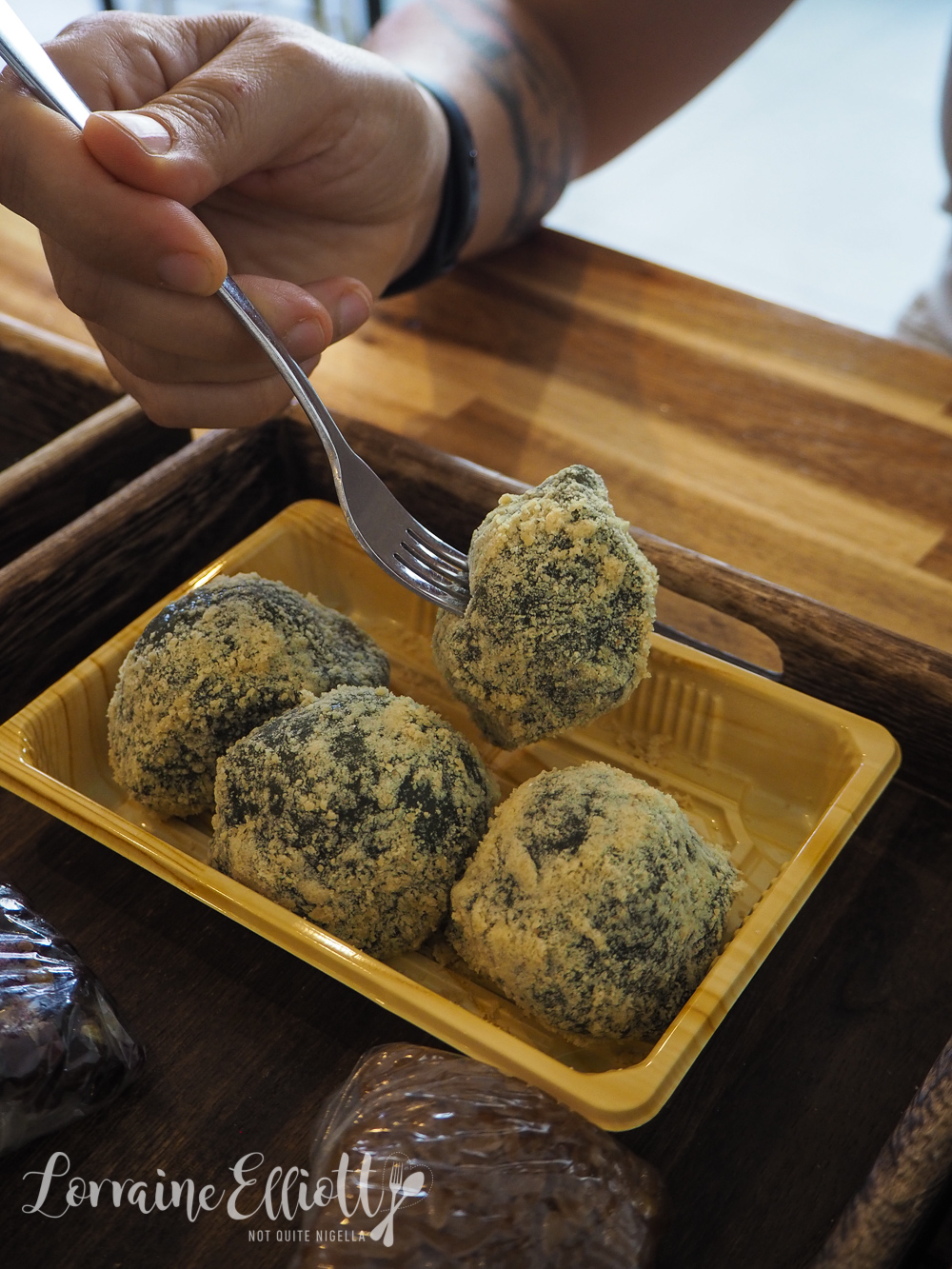 There are two varieties of mugwort mochi both dusted in soybean flour. Mugwort also gives these mochi the green colour and it is slightly bitter but offset by the sweet filling. The flatter one has a delicious black sesame bean filling inside. 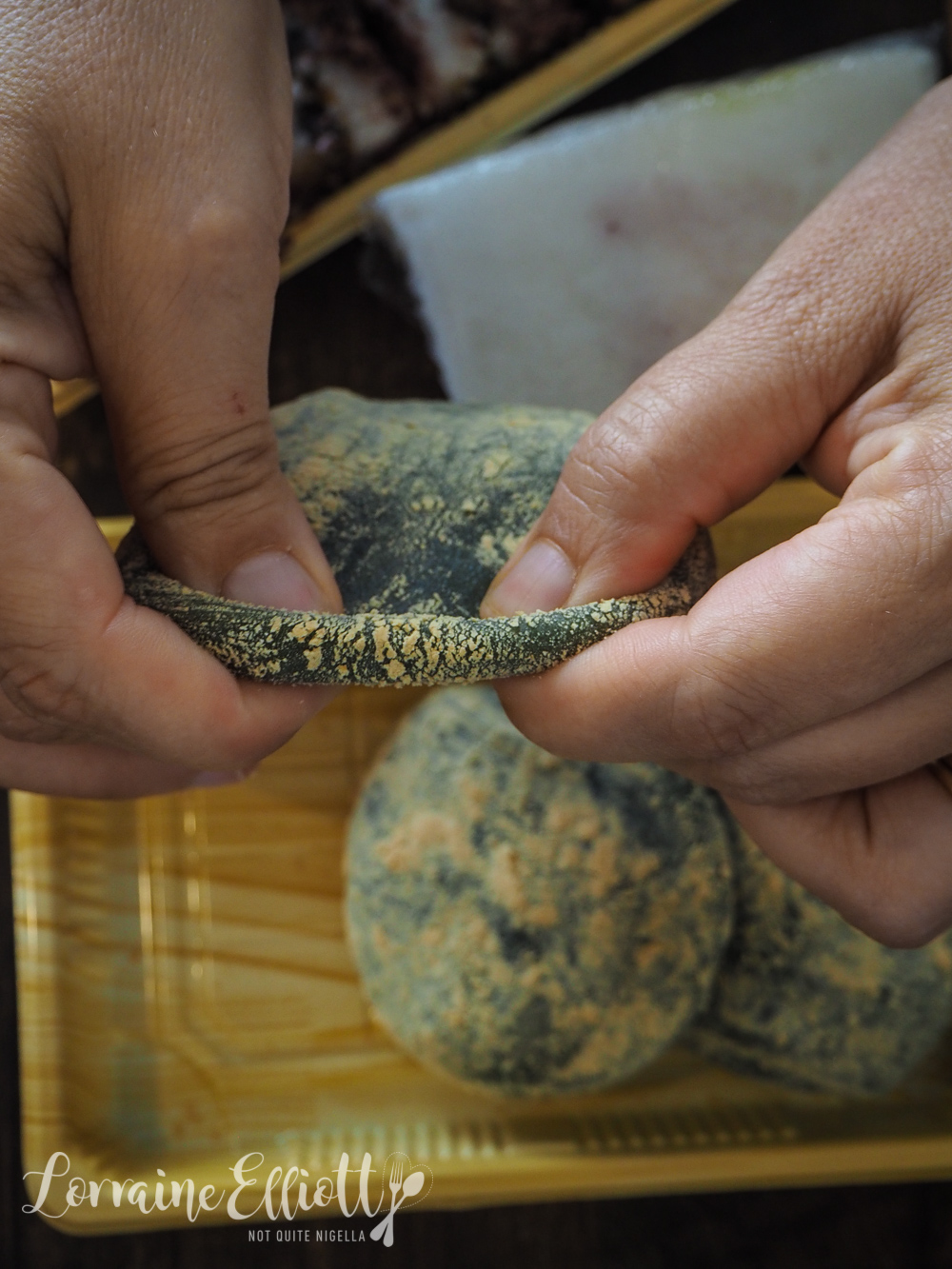 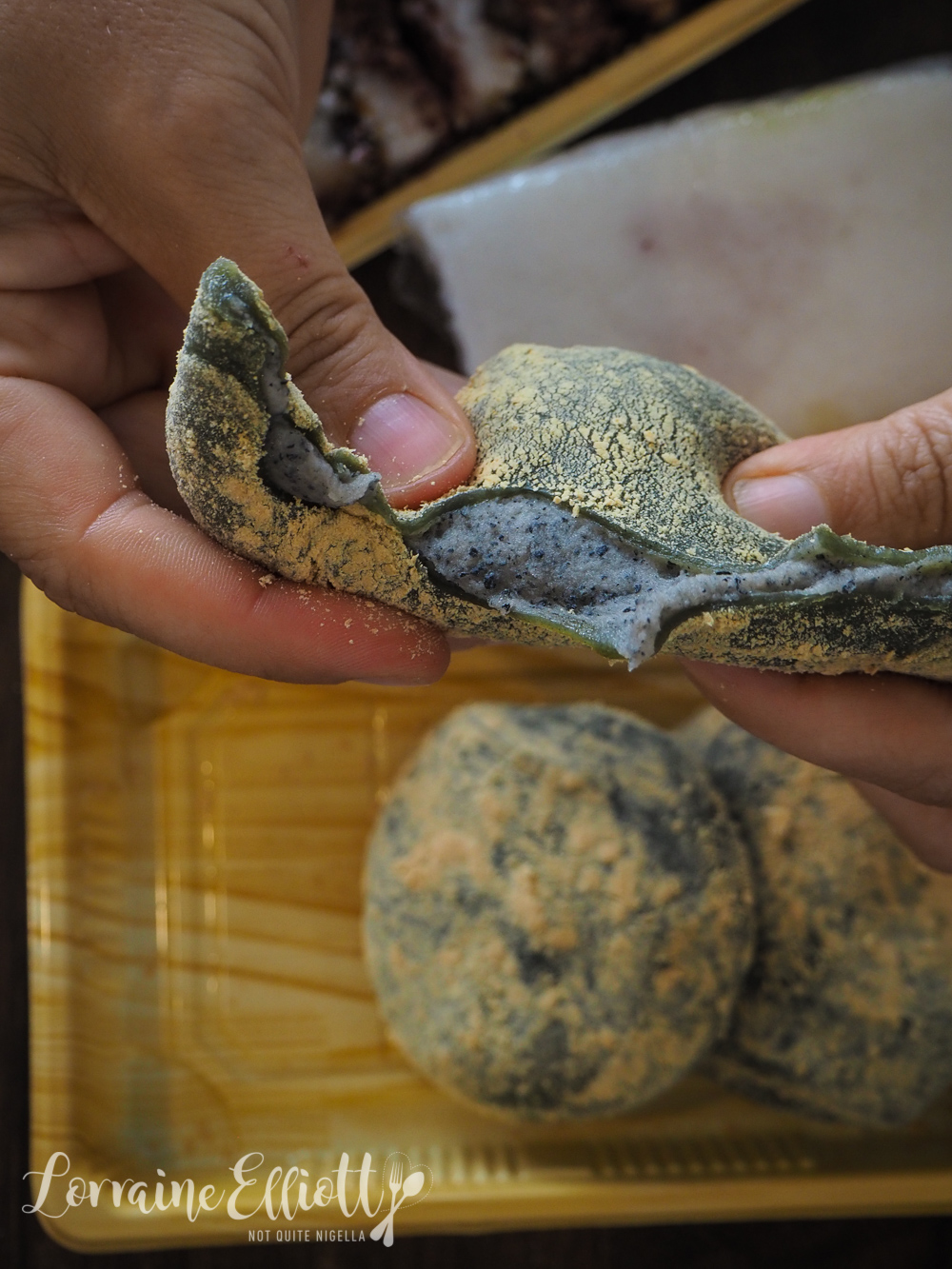 The other, a more rounded one is filled with nuts and citron and a mung bean filling and it slightly drier but the citron gives the filling a nice lift. 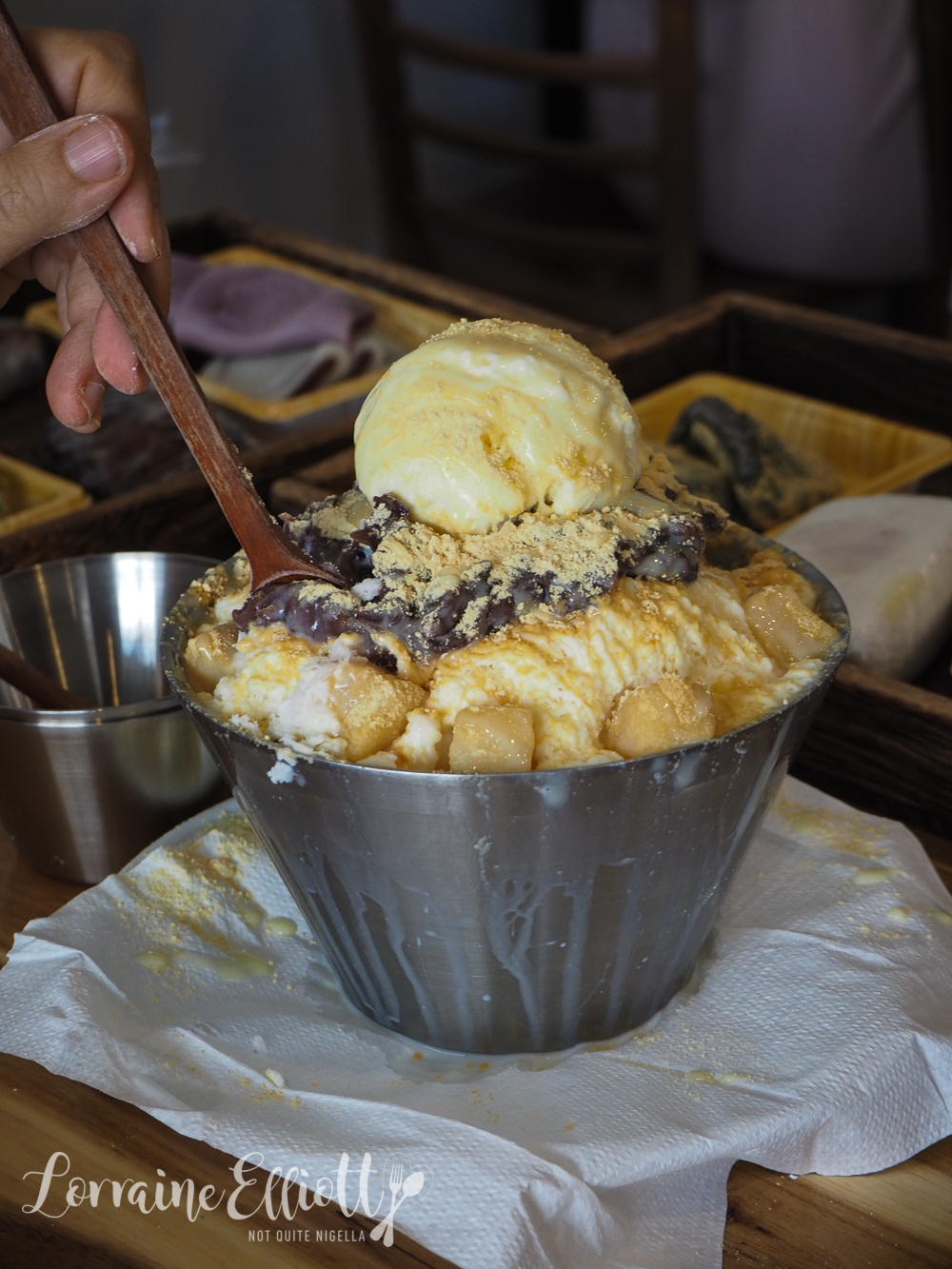 And then there's the bingsu, made with shaved milk ice, a scoop of vanilla ice cream, red beans, soybean powder and cubes of fresh mochi. The mochi is what brings this all together, that wonderfully chewy texture. The only challenge? To get a bit of everything on the spoon!

So tell me Dear Reader, are you a fan of tteok or mochi? Have you tried many types and if so, do you have a favourite?