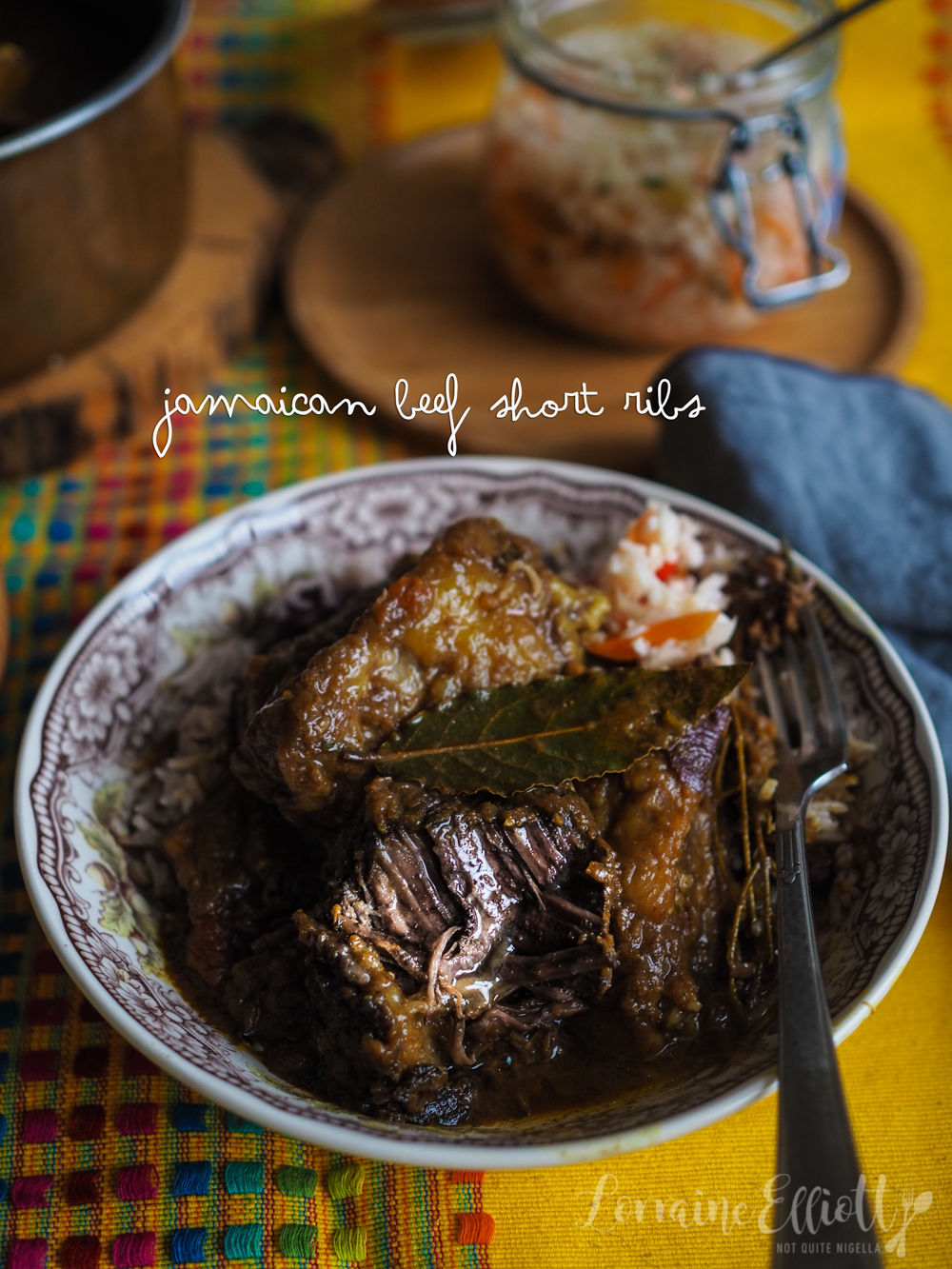 Foolproof, melting beef short ribs but with a delicious Jamaican flavour? If you love Caribbean flavours then you'll adore these tender beef short ribs that fall off the bone with a curry rich in aromatic spices. Pair it with Jamaican Rice and Peas aka coconut rice with kidney beans and punchy Haitian pickles aka Pikliz and you've got the makings for a truly delicious meal with flavours from the Caribbean! This is a pushy recipe Dear Reader! 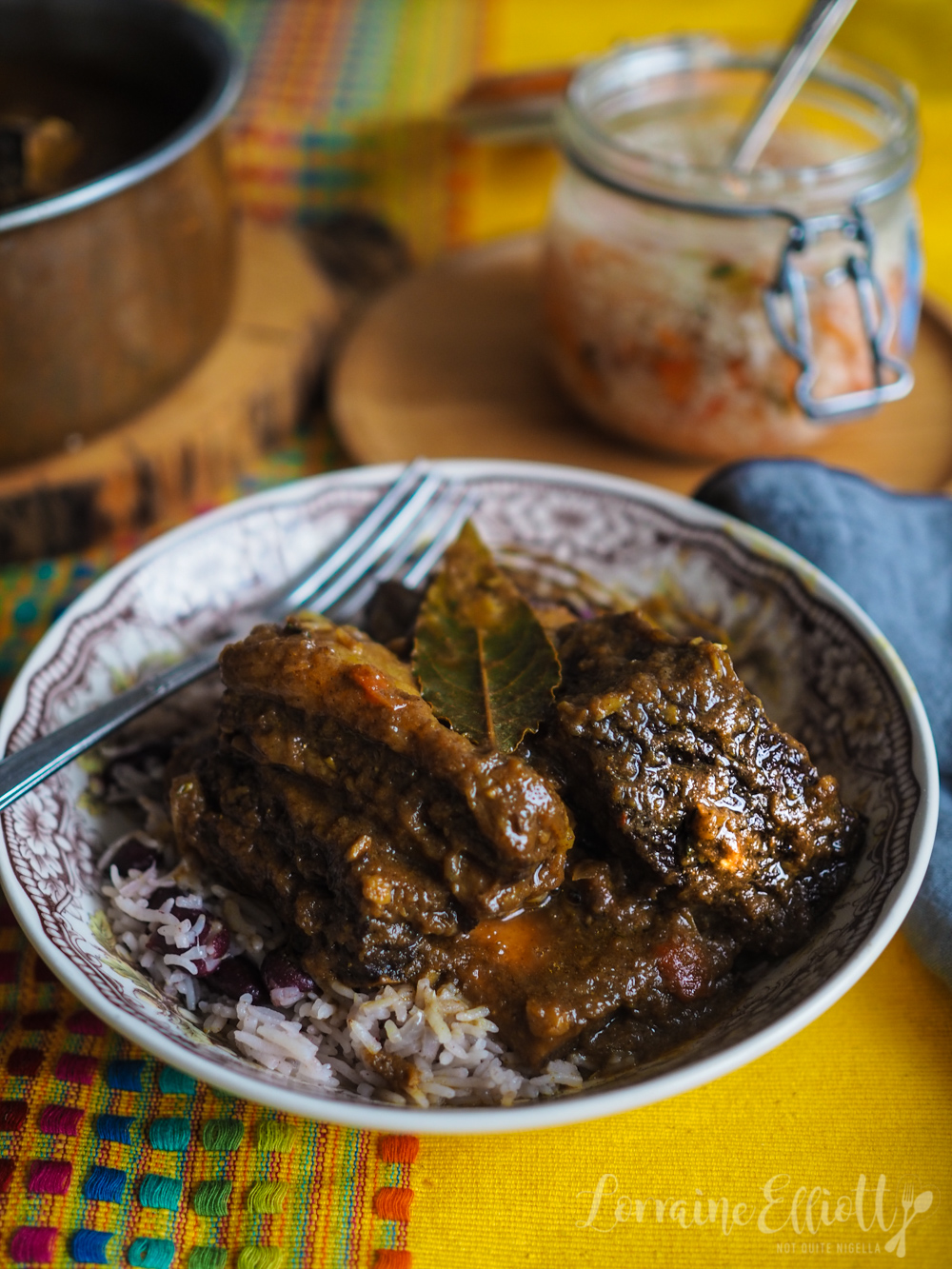 This dish was a serendipitous combination of circumstances. One day Monica gave me a big jar of Haitian pickles aka Pikliz. I was so excited to be gifted pickles that I brain stormed making something special with them. I had beef short ribs in the freezer as I've started buying meat every fortnight to avoid going to the shops so I decided to make a version of beef short ribs flavoured like Jamaican patties or pies. Then before I knew it, I was eating one of my favourite meals. This recipe has allspice and Scotch bonnet chillies that are two commonly used ingredients in Jamaican cuisine. 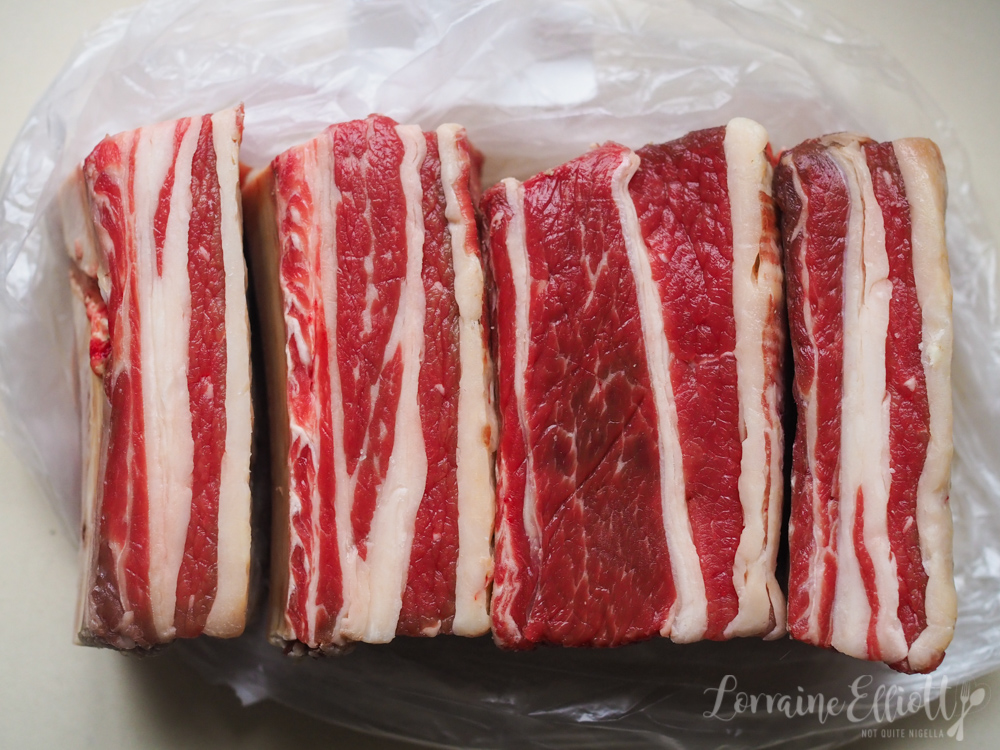 Beef Short Ribs-which style to get? Beef short ribs are a luscious cut from the brisket, chuck, plate or rib of the cow and are best slow cooked. These can be bought prepared in one of two ways: English style or flanken style. I prefer the English style of beef short rib cut where they cut between the ribs rather than across them because you tend to get that lovely rectangle or fillet of melting meat. This is often how it is served in restaurants. 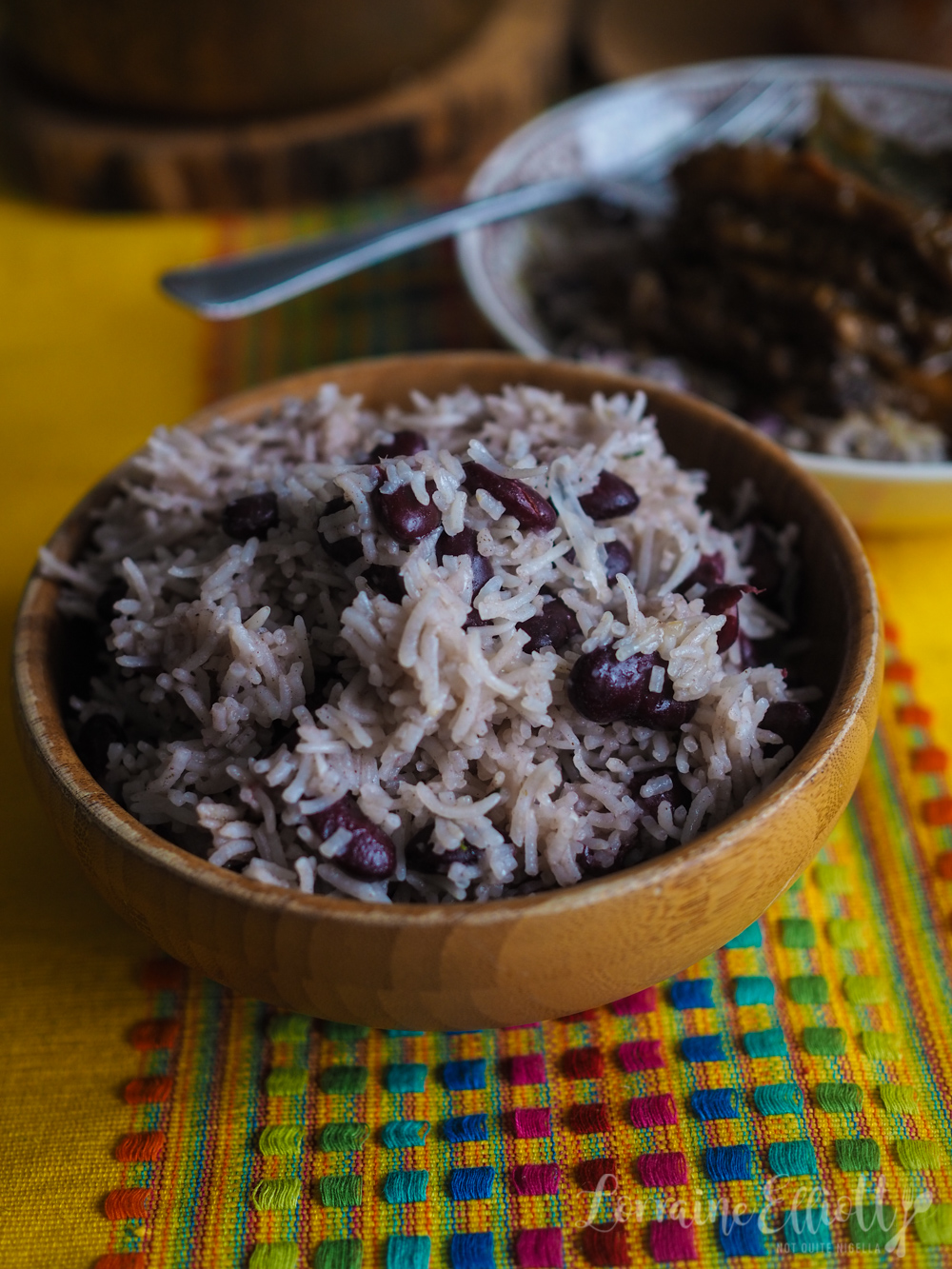 Jamaican Rice & Peas: Rice and Peas are derived from a dish called Waakye a dish from the Akan tribe from Ghana and the Ivory Coast in West Africa. The most popular day for eating rice and peas was Sunday and this practice hails from the 17th century slave trade where Sundays were the only days that slaves were given off. Nowadays it is so popular that it appears everywhere and on all occasions and is even dubbed the "Jamaican Coat of Arms". 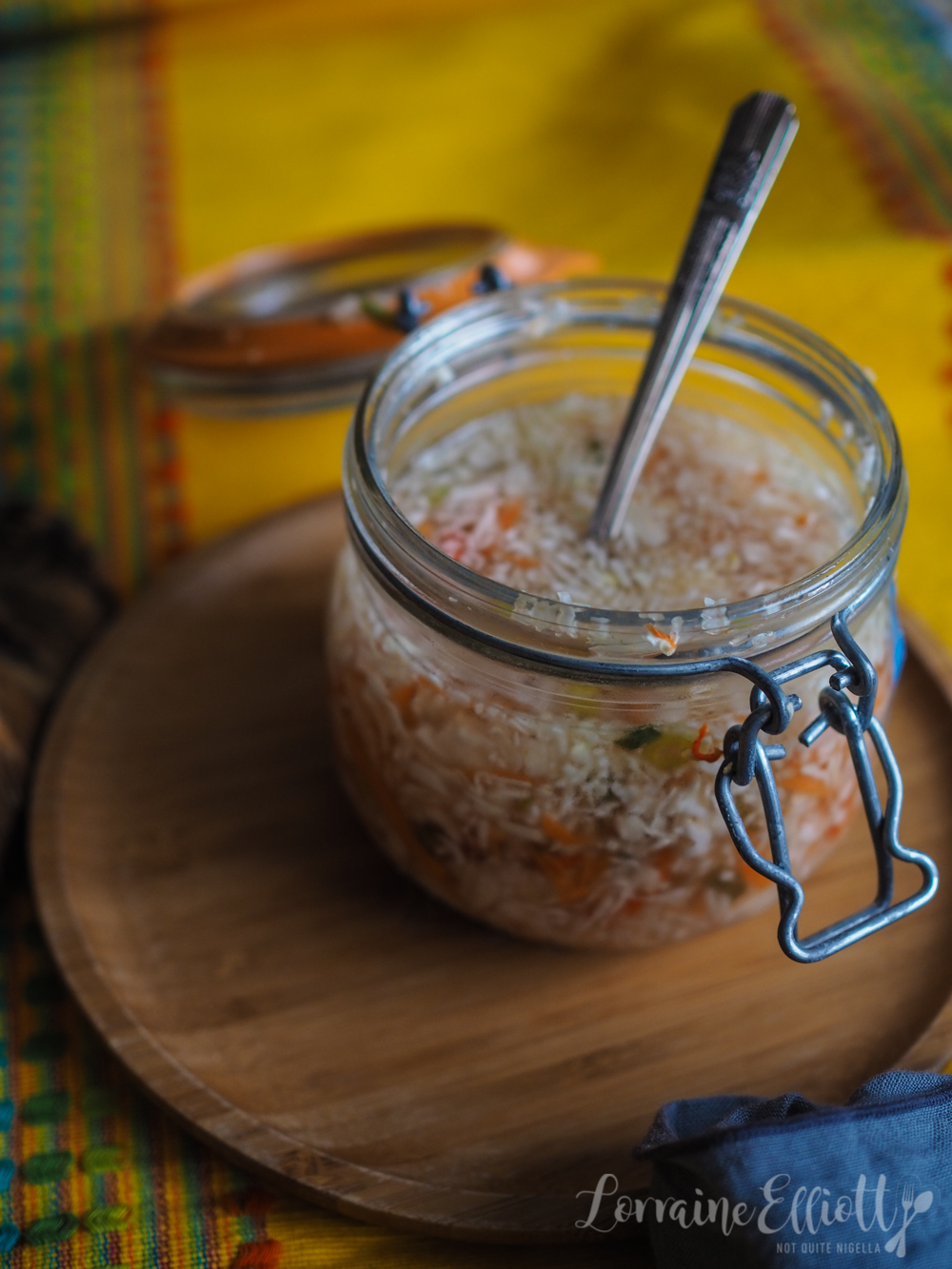 Pikliz: Pikliz (pronounced pick-lees) are Haitian pickles or a condiment that are served with everything in Haiti be it breakfast, lunch, snacks or dinner. Pikliz are made using cabbage, carrots and the very important Scotch bonnet of habanero chilli so they pack a nice heat to them. There isn't just heat with Pikliz, there's also a crunch from the carrot and cabbage and the lime juice and vinegar acids are important to help preserve Pikliz as in Haiti not everyone has electricity. They're a quick pickle that doesn't require canning so they're handy to have in the fridge for when you need a bit of a punchy pep where they'll last for 2 weeks. 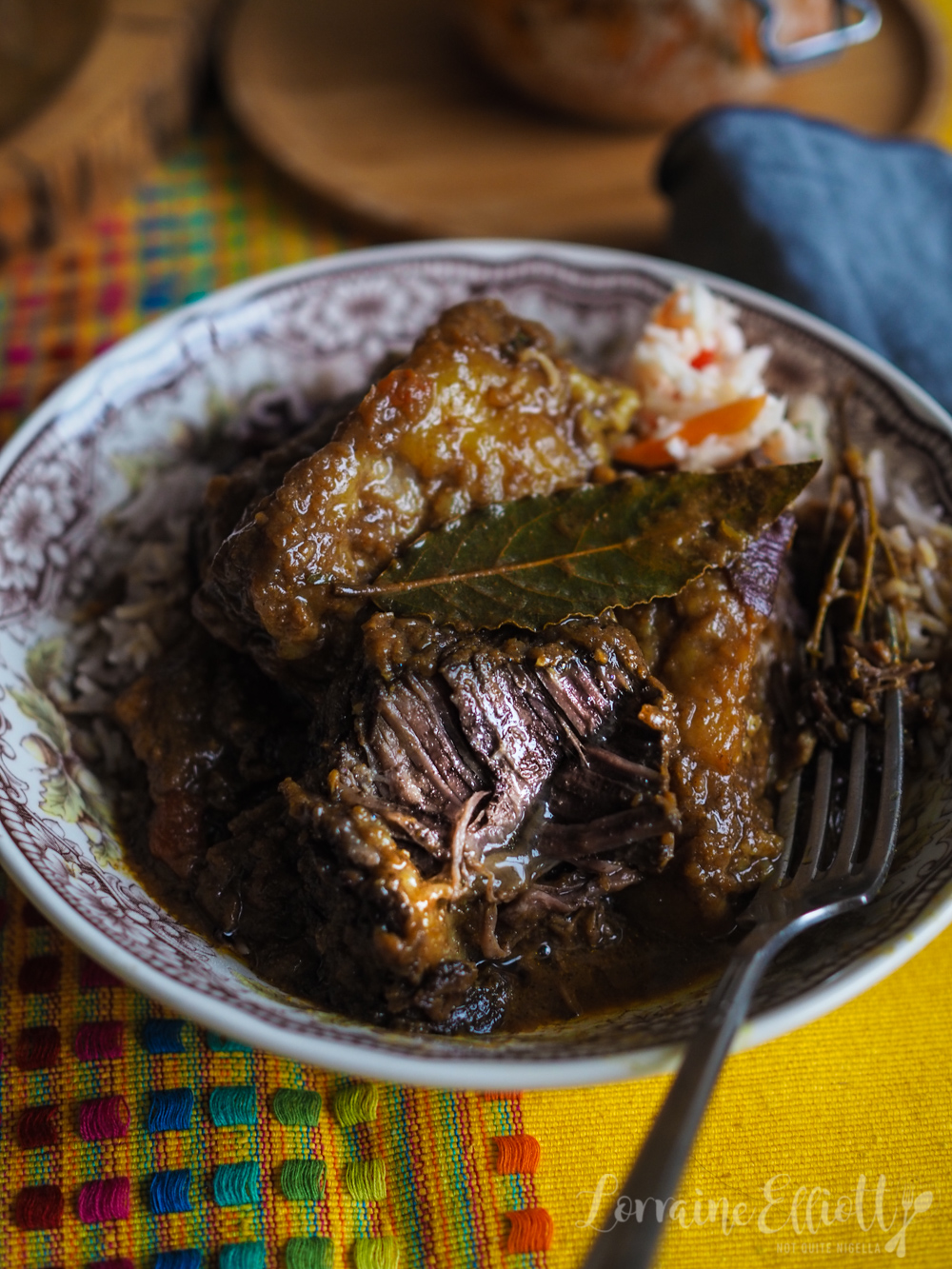 Slow Cooker, Pressure Cooker/Instant Pot or stovetop Beef Short Ribs? This recipe is perfect for all of these and I've given times for each of these methods of cooking. I prefer pressure cookers because I love anything that saves me time but choose whichever one you prefer. I actually like making these one day and then eating them the next because it's easier to skim the fat that way and the flavours develop better over time. I usually put the ribs in one container and the curry sauce in another and the fat floats to the top. The fat or drippings is great for roasting potatoes in too. 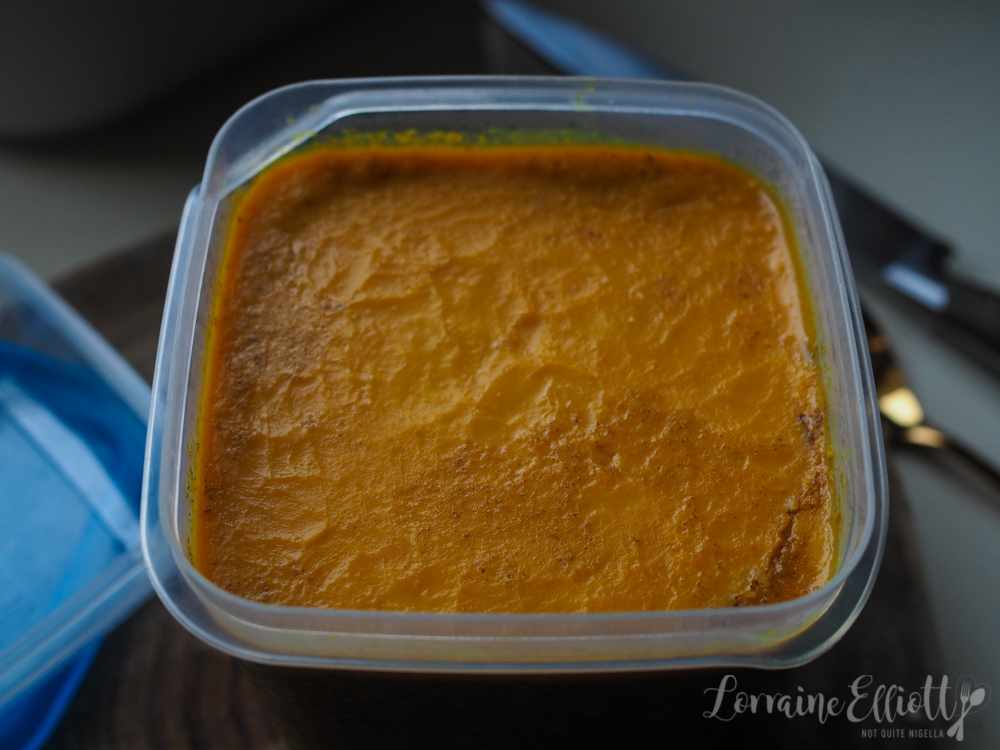 The solidified fat at the top

Have you developed any fun hobbies during lockdown Dear Reader? Mr NQN and I have started playing a video game together. I have to admit I am the least likely to ever play a video game. I just don't understand them and I peaked at Pac Man and Space Invaders as a bébé. But he piqued my curiosity with a game called geoguessr. For anyone that has had fantasies of being a detective (me!!) then this is a fun game. Basically you are plonked down somewhere in the world and you have to deduce where the setting of the game is based on the clues given through google maps and observation. They may plop you down in the middle of a field and you have to guess where you are. 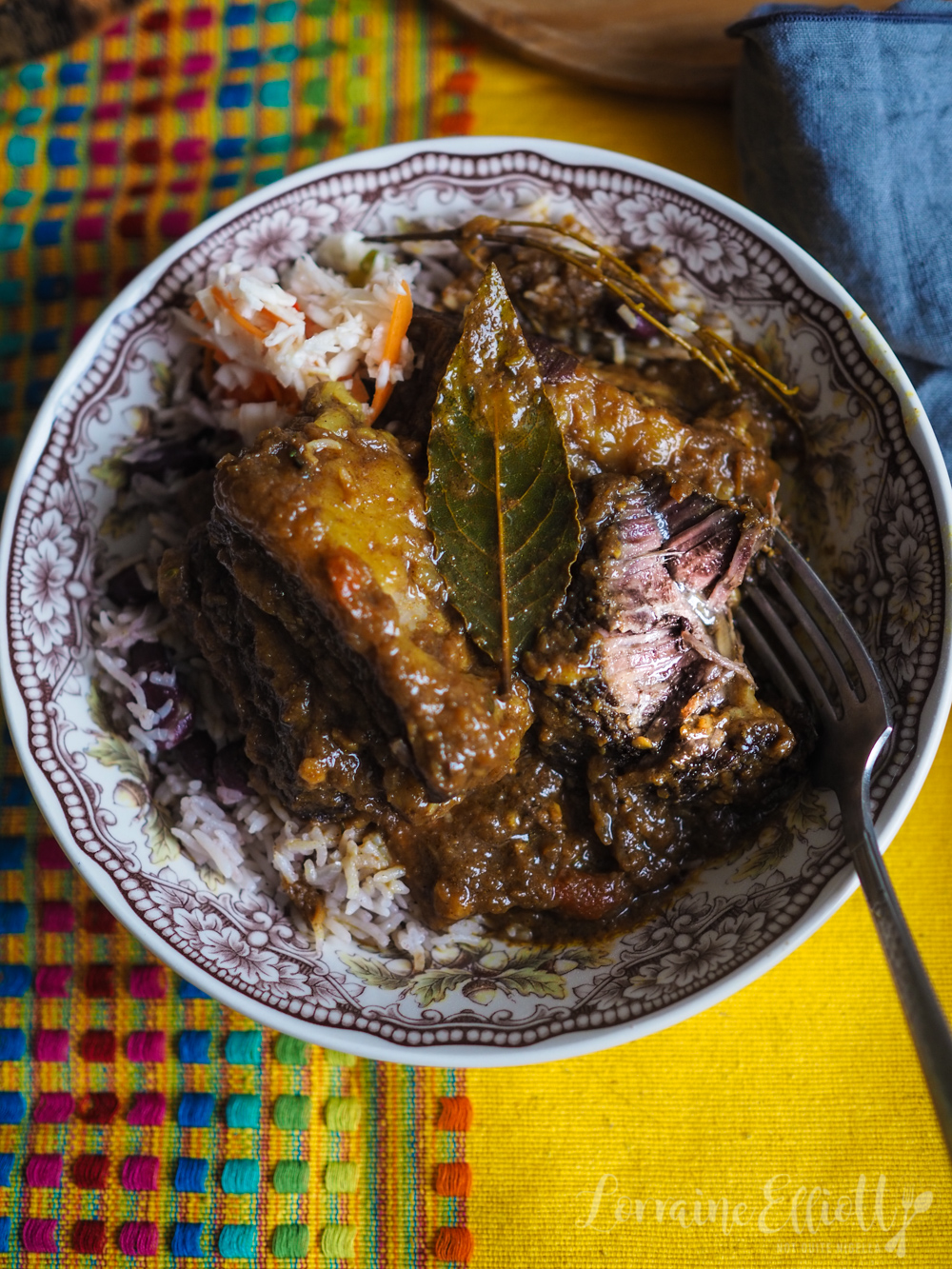 The part I like most? In a bizarre way, it feels like travelling. You're seeing the real world, it's not staged and it's not computer generated. It's like when we used to go to faraway lands and walk past rice paddies or get lost in a city where you can't understand all the signs. We've played this many nights especially on the weekends when we can spend 3 hours in bed trying to guess where we are. One of the best parts is that it works your mental energy so that by the end of playing a round of 5 games you're mentally exhausted which helps you sleep like a baby! So far we've "travelled" to Vermont, Iceland, Lima, South Africa and Lichtenstein among others. Sometimes I annoy Mr NQN as he likes to guess the places as fast as possible whereas I just like "walking" down the streets of a city and just wandering around.

So tell me Dear Reader, do you like Jamaican food and flavours? Which cooking method do you use the most: stovetop, slow cooker or pressure cooker? Would you enjoy a game like geoguessr? Are you a video game player? 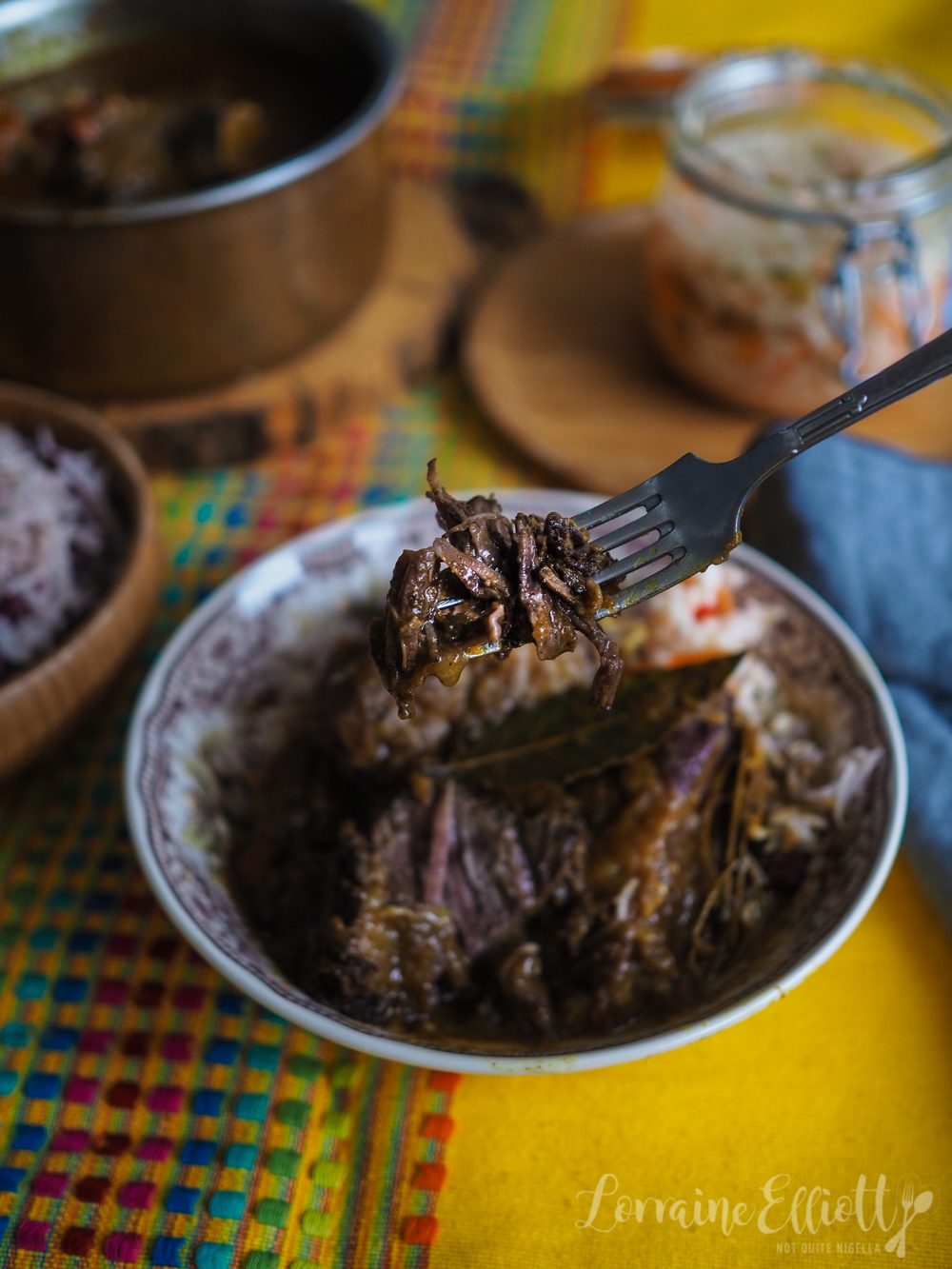 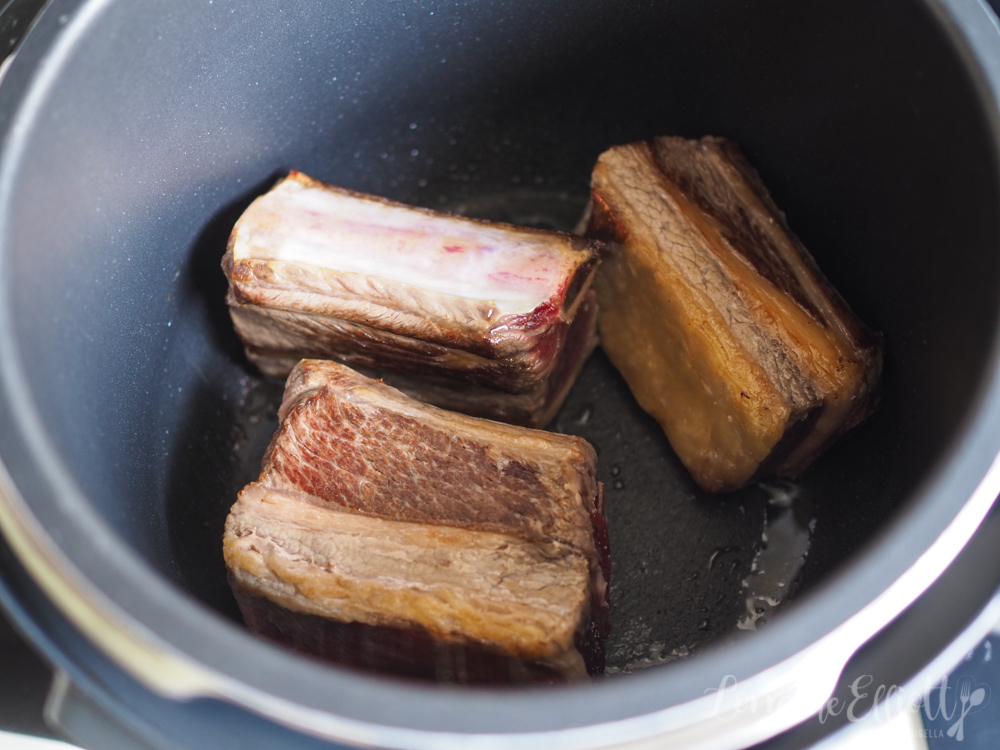 Step 1 - First start on the ribs. You can do this in a cast iron pot in the oven, slow cooker or pressure cooker/instant pot. To make ribs, pan fry ribs in a little oil and brown on all sides. Do this in a few lots so as not to crowd the pan. Remove from the pot and add spices (curry powder, cumin, turmeric, paprika and allspice). Cook for 2-3 minutes until fragrant, then add the onion and cook until softened. Add garlic and chillies cook for 1 minute. Add bay leaves, thyme, black pepper and stock and place the ribs back into the pot. 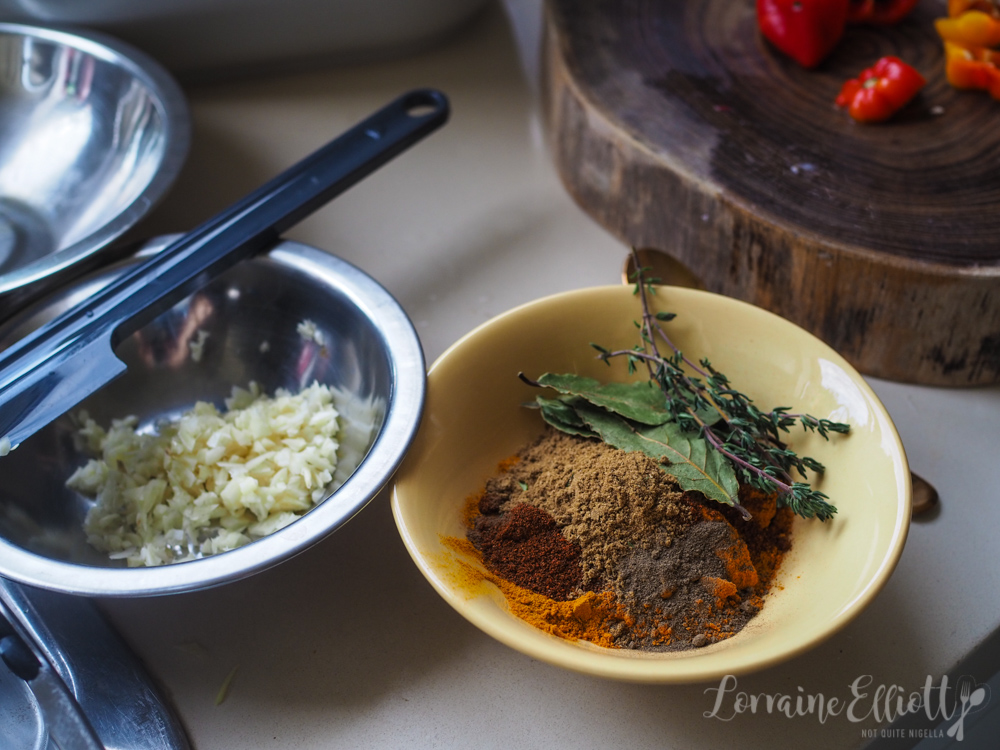 Step 2 -For a pressure cooker, cook on high pressure for 1 hour. For a slow cooker, cook for 8 hours on high, for a cast iron pot cook for four hours in a 160C/320F oven with the lid on. The beef should be meltingly soft when it is done and fall off the bone. Remove the ribs and skim the fat off the top of the liquid. Put the liquid onto boil to reduce it so that it becomes a thick curry like sauce and season with salt and pepper. You can add a teaspoon or two of sugar to balance the flavour if you'd like. 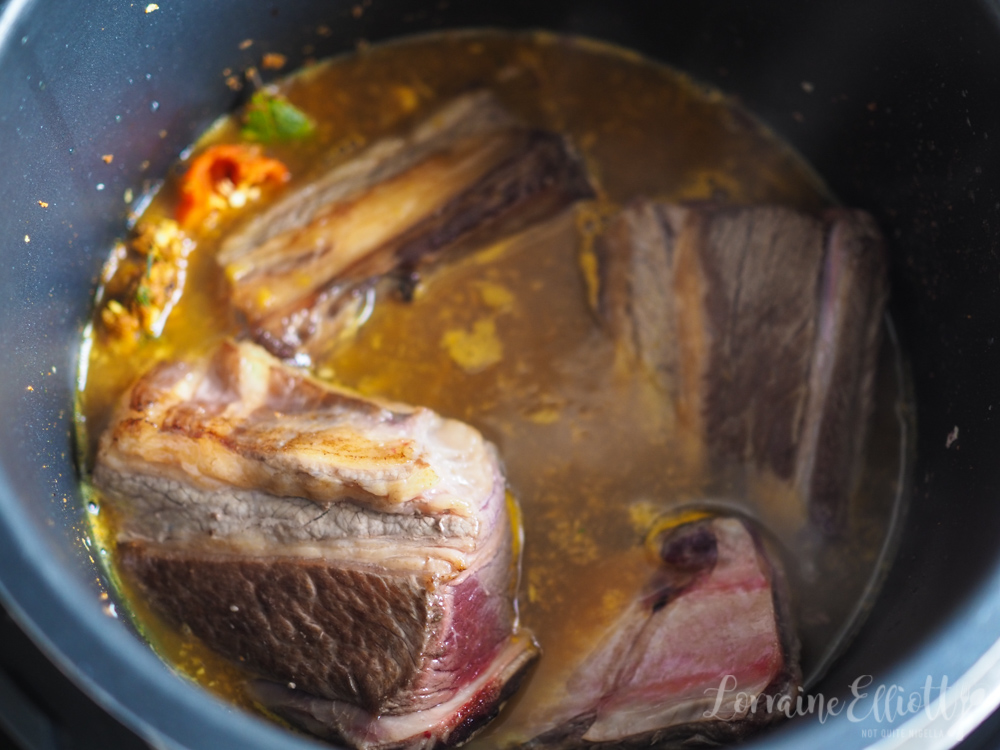 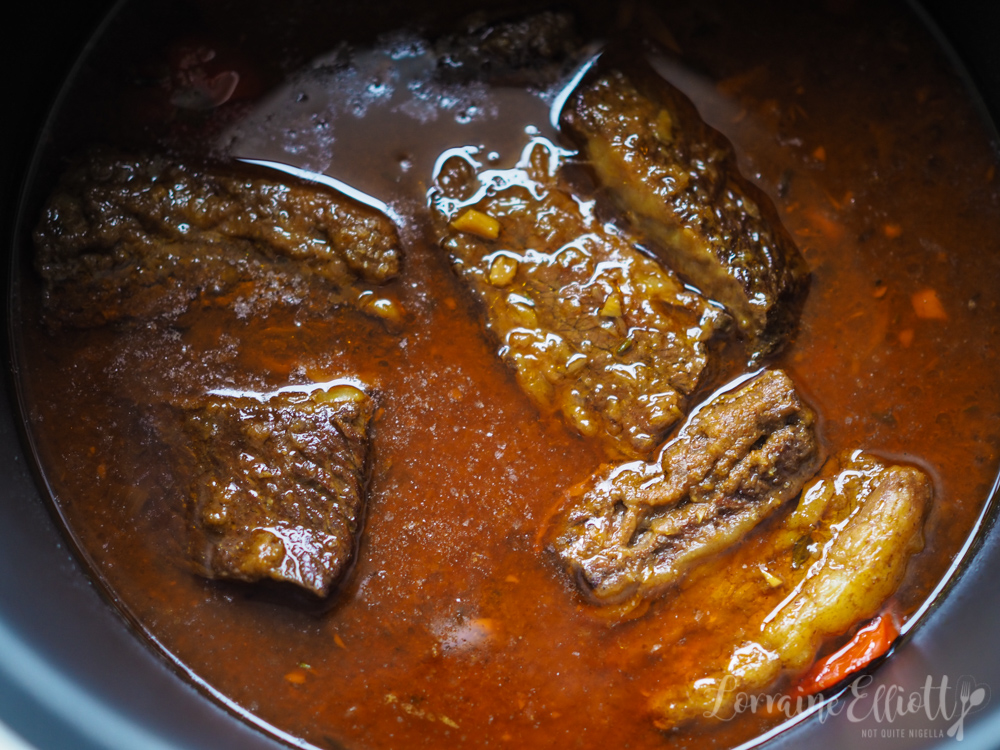 Step 3 -While the ribs are cooking make the pikliz as it takes a couple of hours for it to steep. Mix the cabbage, carrots and chillies and add the lime juice and salt and massage for a few minutes. Place in a glass jar and add apple cider or white vinegar to cover the vegetables and let steep for a couple of hours. I keep it in the fridge. 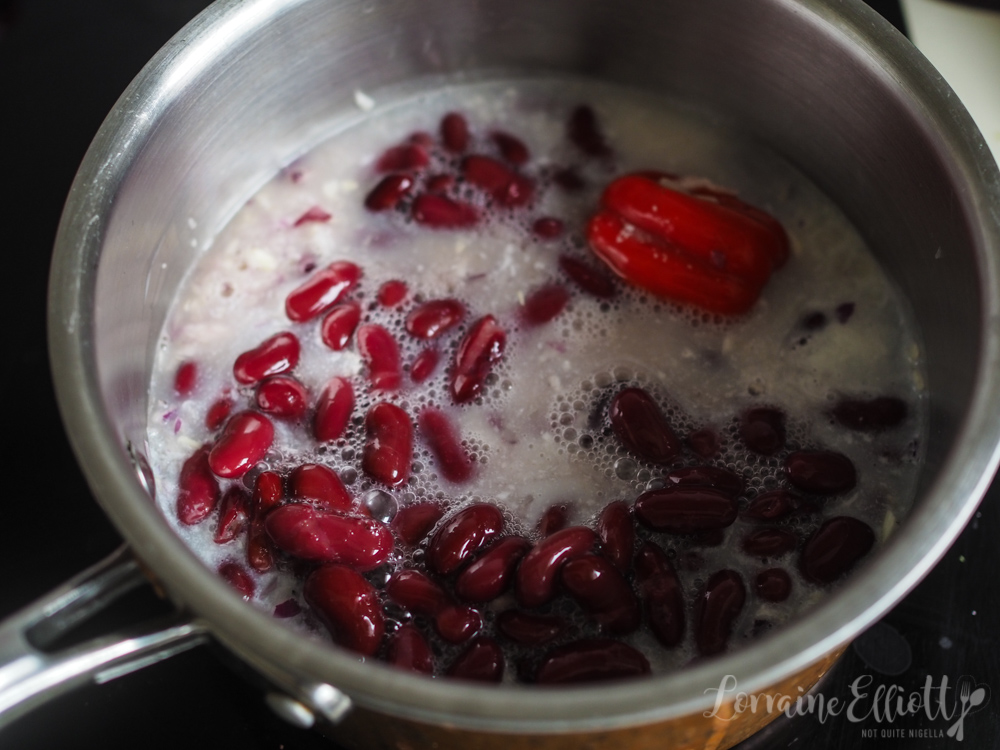 Step 4 -30 minutes or so before the ribs are finished make the rice and peas. Jamaican Rice and Peas: recipe here 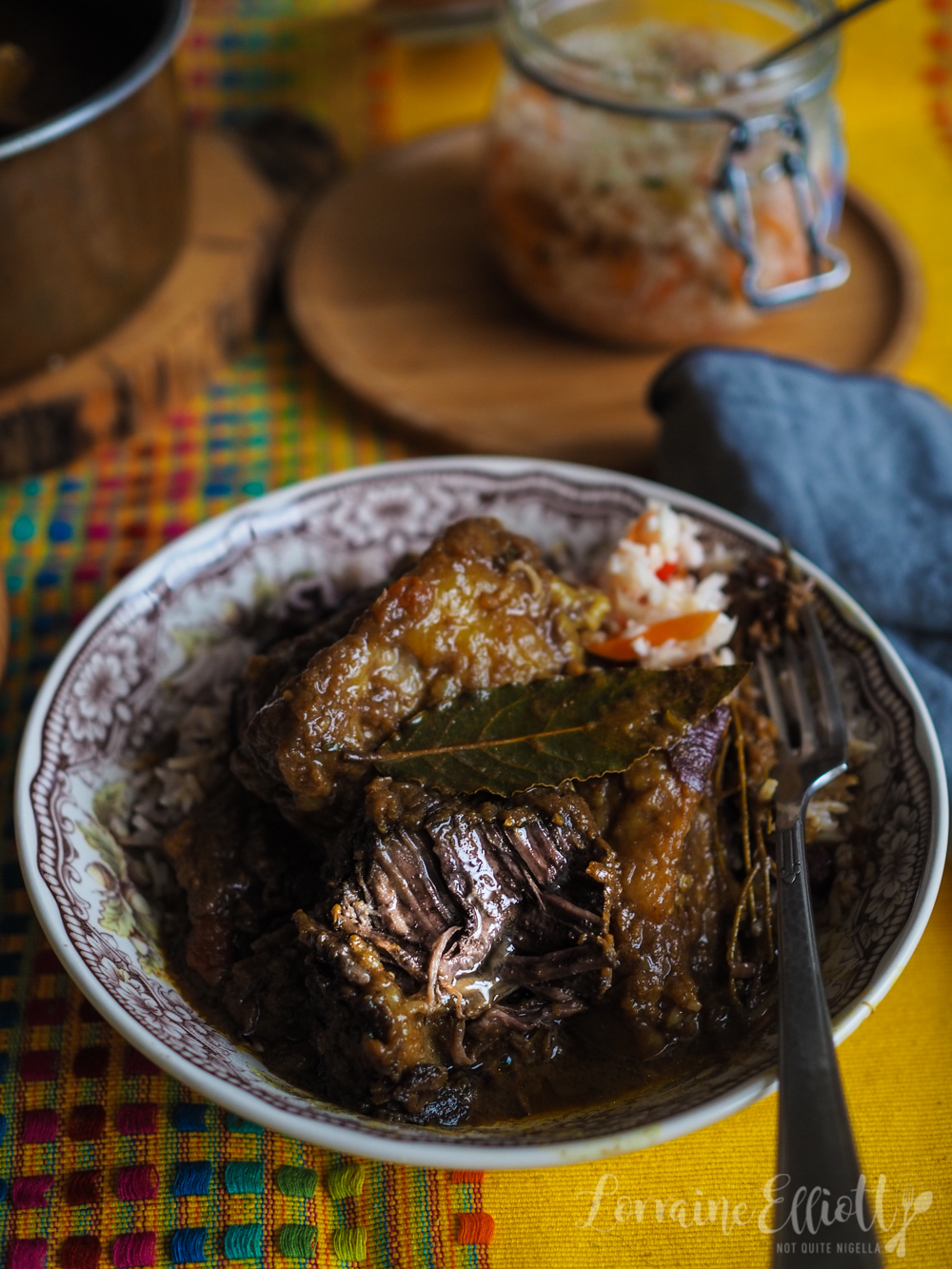