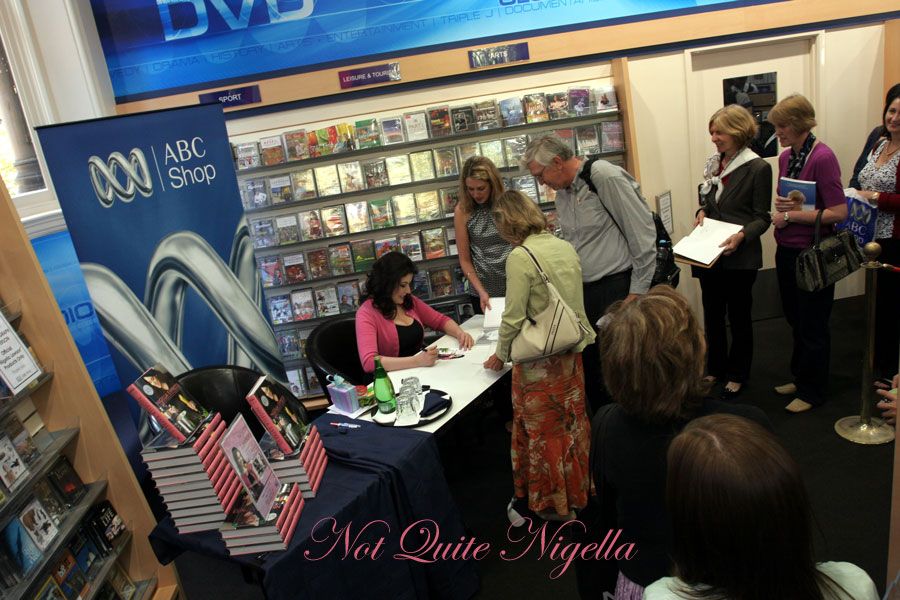 The Domestic Goddess herself, Nigella Lawson graced our fair, sunny shores today to sign the books of the Sydney contingent of her Antipodean fans. I for one, managed to sleep well despite the occasion although there was just a little hint of trepidation along with excitement. What if she wasn't as lovely as she is on television? Would I have to rename my blog to "I don't want to be Nigella"? That's the risk of meeting your "idols" I suppose. 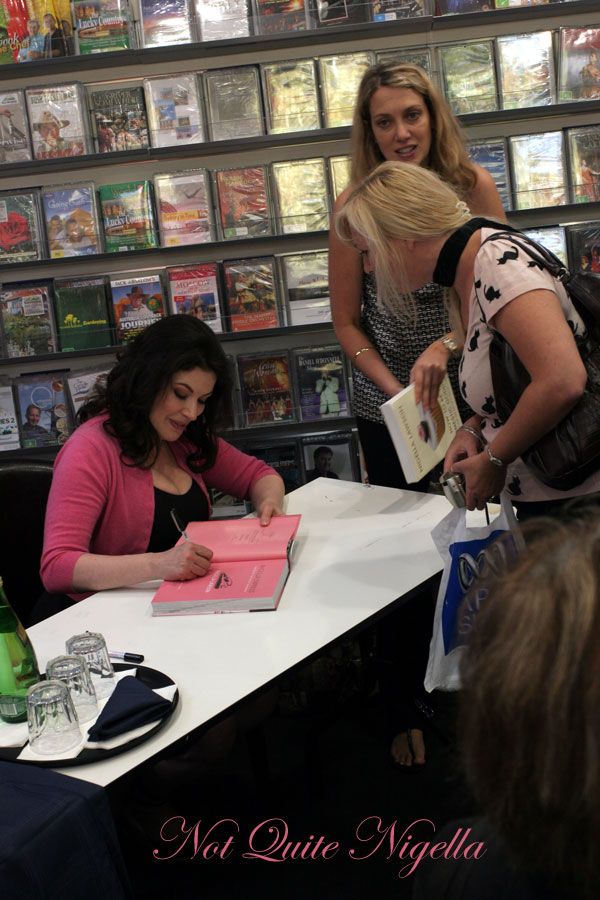 I managed to convince my lovely husband to take a few hours off work and come with me to photograph her book signing and we lined up at about 11.45am for the 12:30pm start. There were already about 200 people lined up, some since at least 9am. The crowd is made up of 2/3 women and 1/3 men and the line snakes around the shops on the first floor. There were at least 5 security personnel as well as ABC staff on hand to see that everything ran smoothly. The security guards are apologetic about the long queue and the ABC staff apologetic as Nigella will only be signing her name due to the number of people and only 1 item per customer. Damn, there goes my little intro about my website when I ask her to sign to "Not Quite Nigella" :( 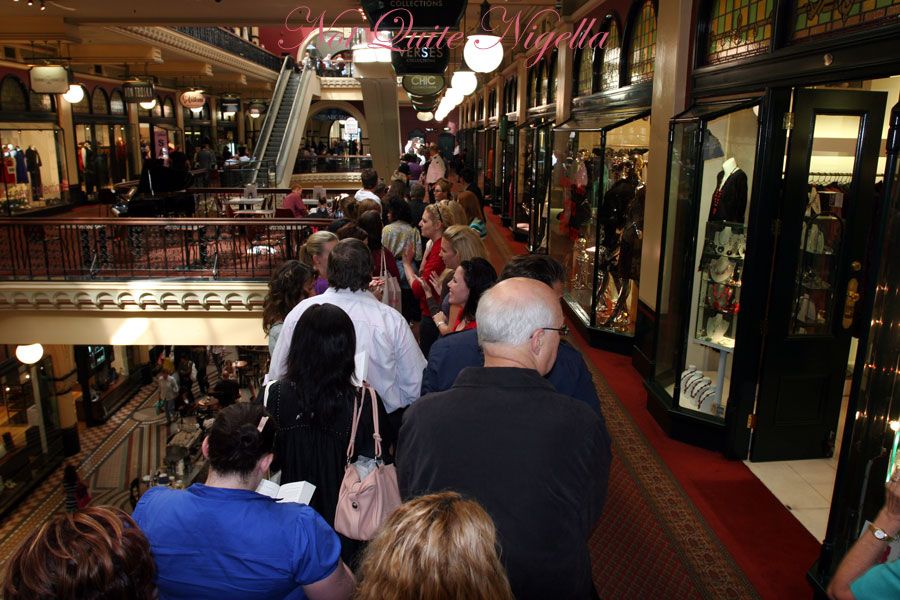 Once 12:30pm hit, the line moved smoothly. It was only another 10 minutes until we reached the front and we ushered to the corner of the store where the Domestic Goddess herself sat. In a candy pink cardigan and black dress (exactly like the one she wears on the Nigella Feasts DVD cover) she is as stunning as she is on television. Her skin is luminous and she has a broad sweet smile. I have three books but the ABC staff help open them up to the signing page so that she'll sign them all. 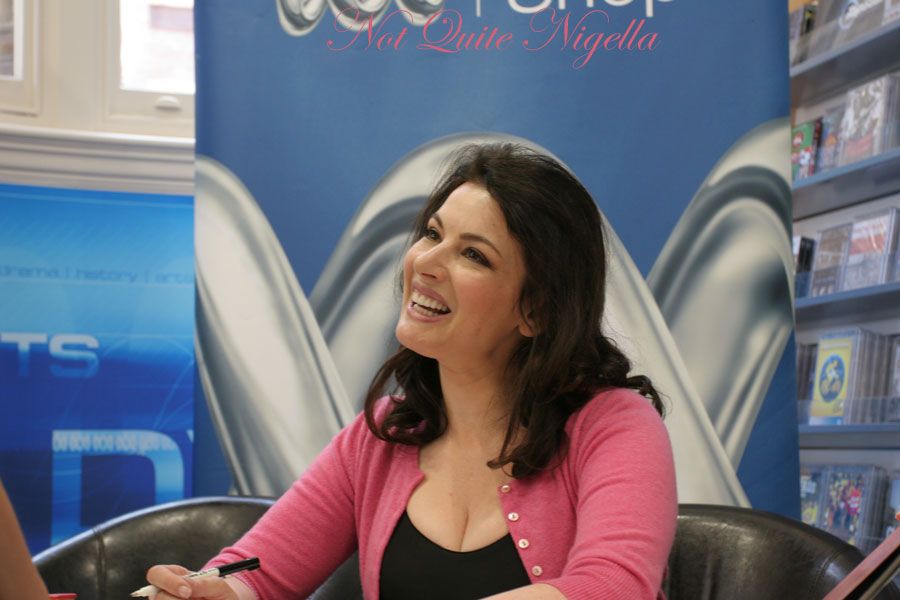 Yes the above photo and three below photos were our little exchange! My arm on the left :lol: 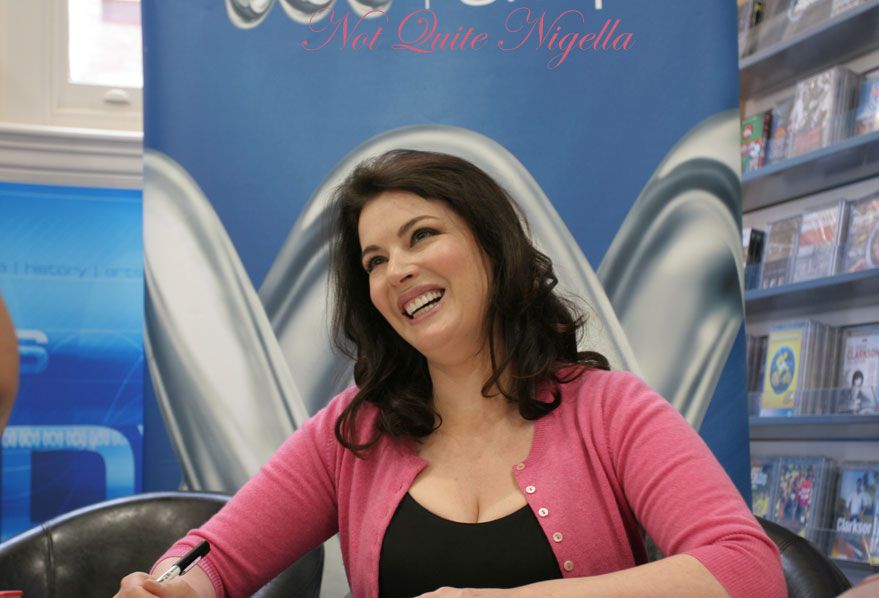 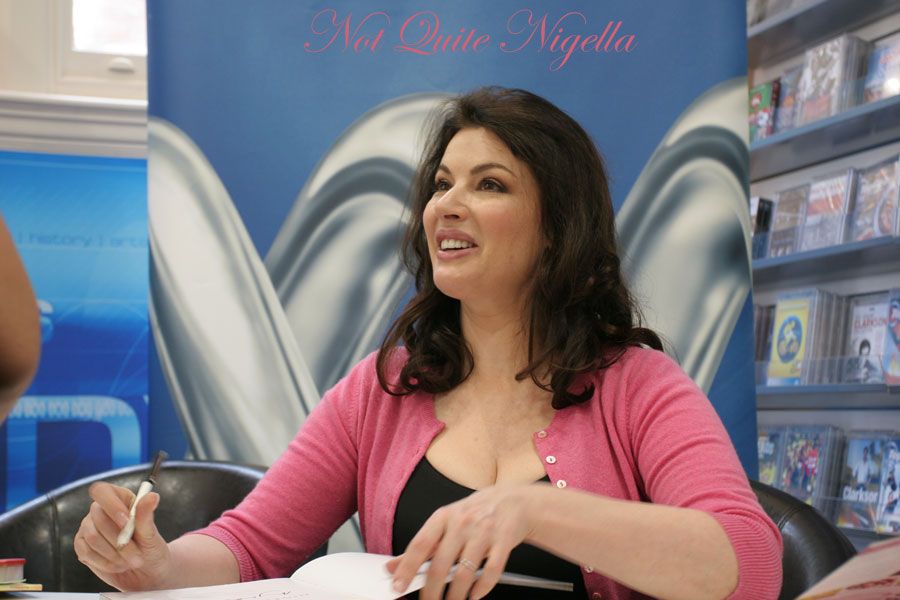 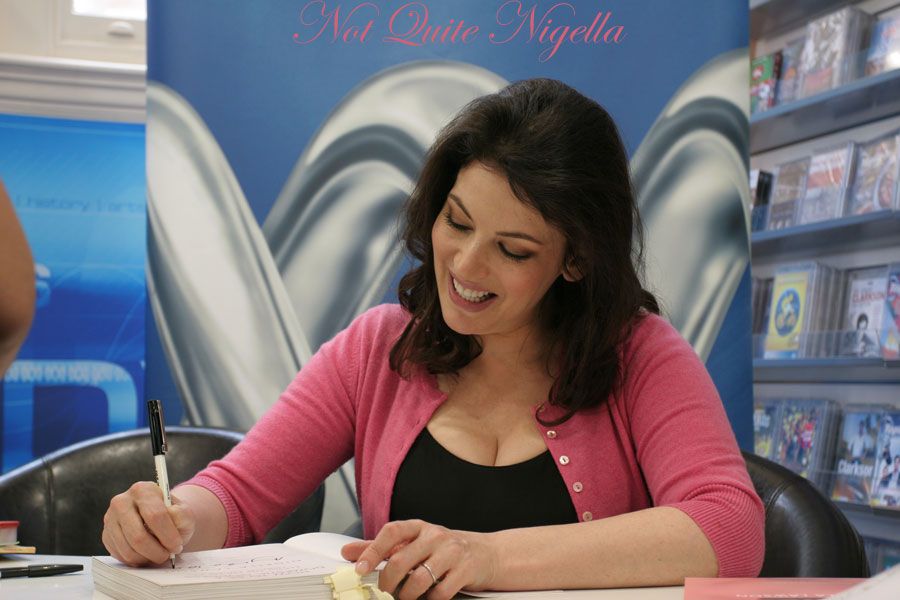 I even get a bit of a conversation with her when she comments "Wow, you have so many things marked for cooking" about the earmarks on all of my books. While in the queue, I was a little embarrassed at my well worn, well marked books compared to everyone else's pristine copies but she doesn't seem to mind. I said to her that I had already made at least 1/4 of Express, hence the dodgy cover but Domestic Goddess was my favourite as I love baking and I would have brought all 6 but I didn't think that it was practical. She smiles that fabulous and genuine smile again and says that is wonderful and that bringing all 6 would be rather too heavy indeed. She signs unhurriedly and cocks her head while doing so which is much like the way she is on television. 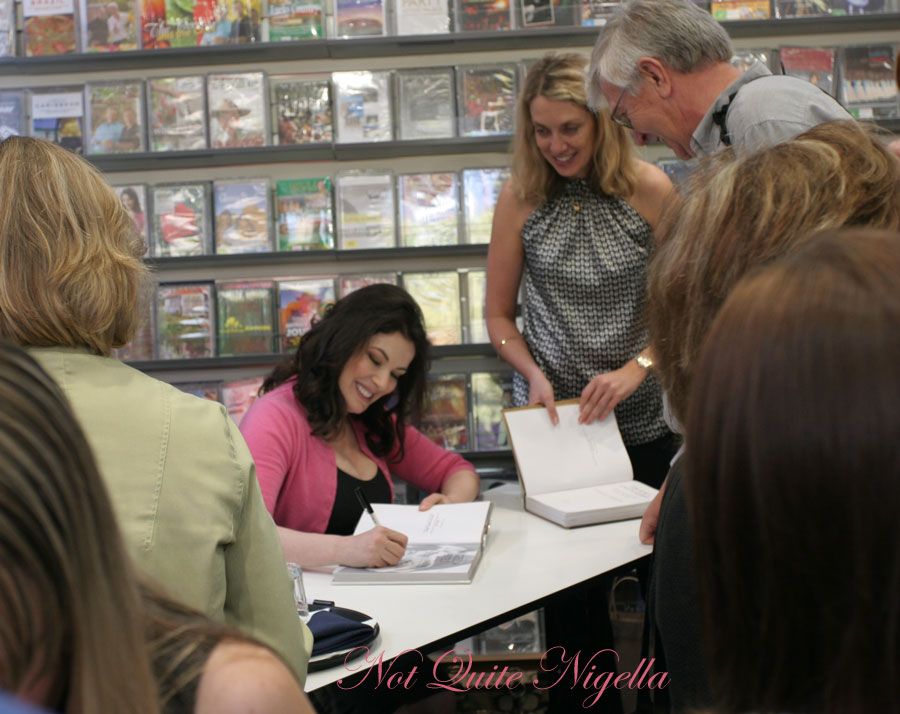 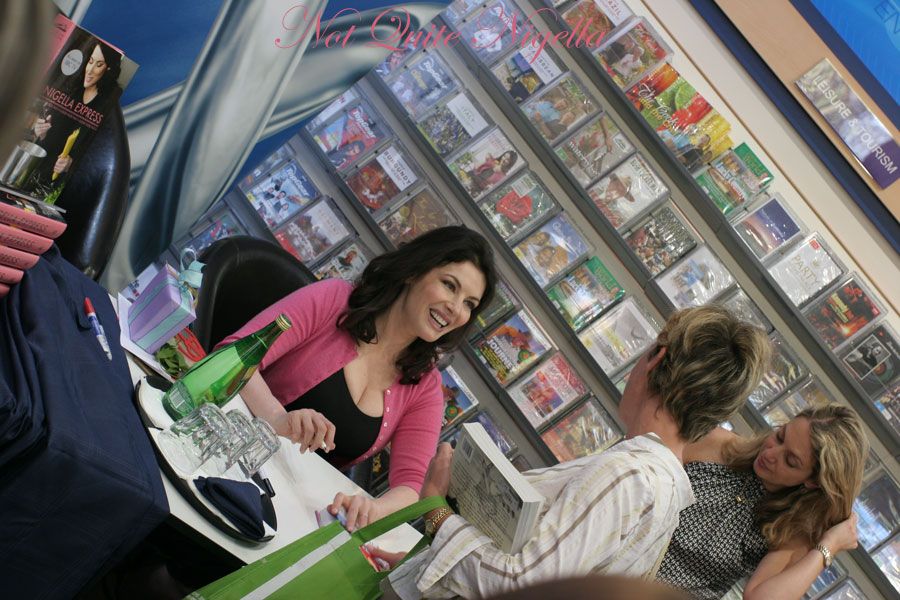 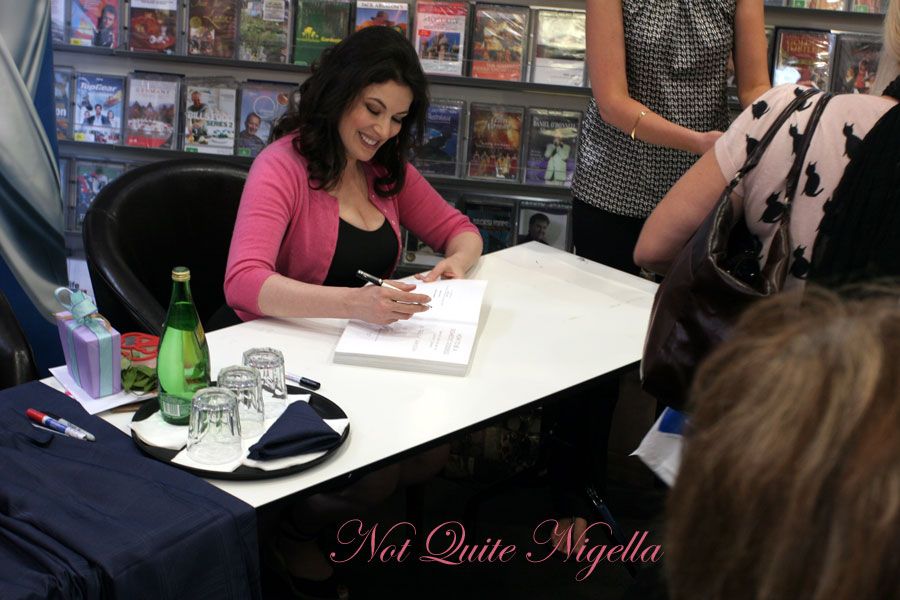 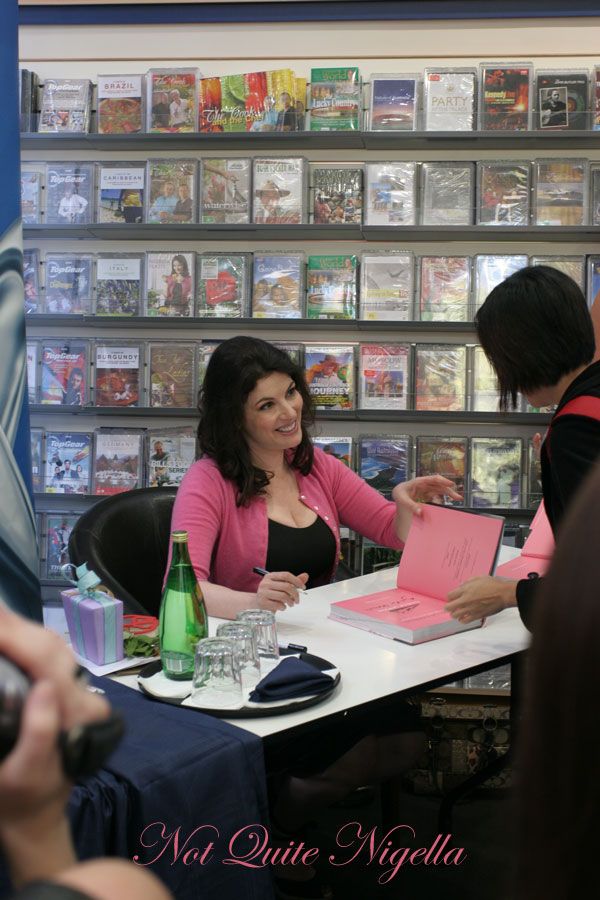 After a few more photos and a thankyou and goodbye, we're ushered along to make room for more people getting their books signed. She has a lovely smile for everyone and looks at everyone in the eye which is exactly what everyone had hoped for. I think the title of just "Goddess" would be rather fitting. 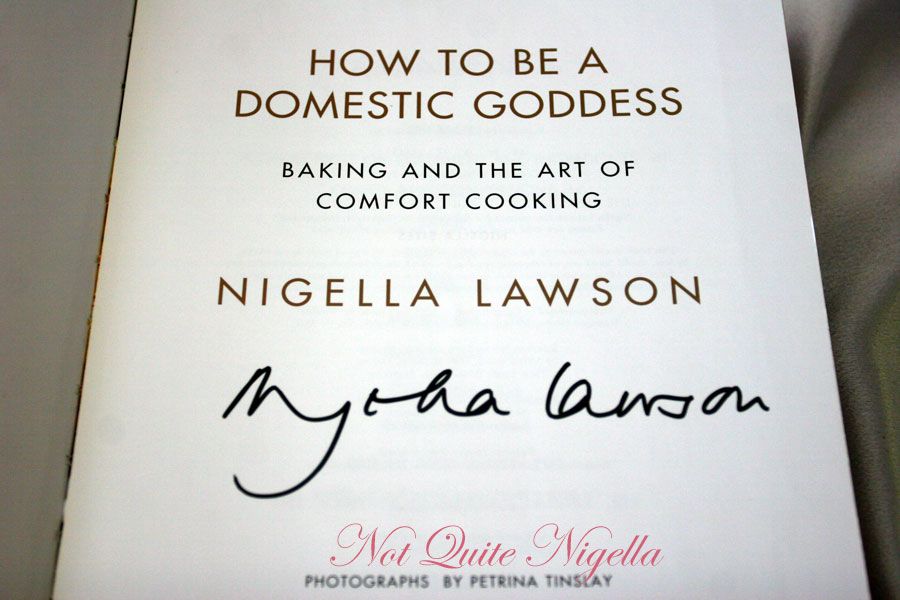 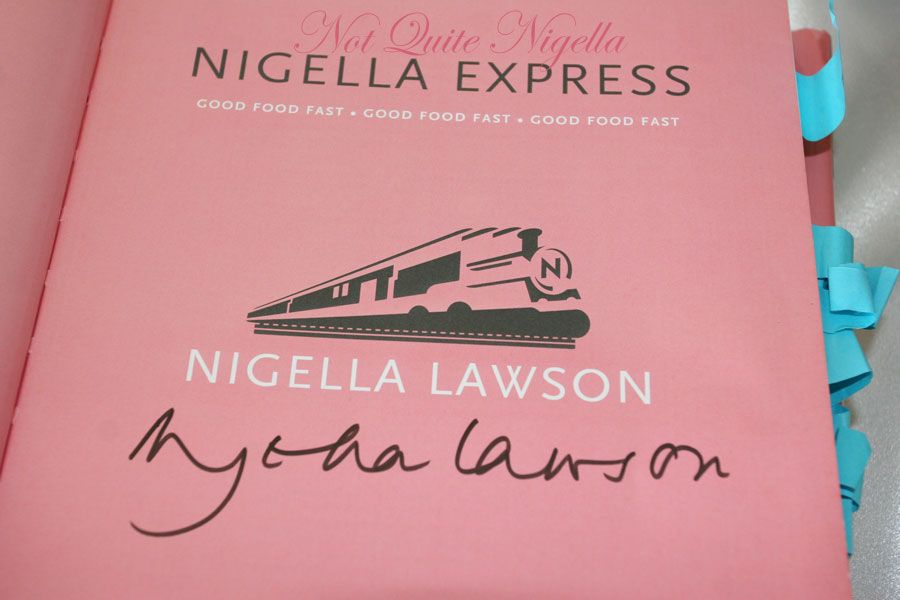 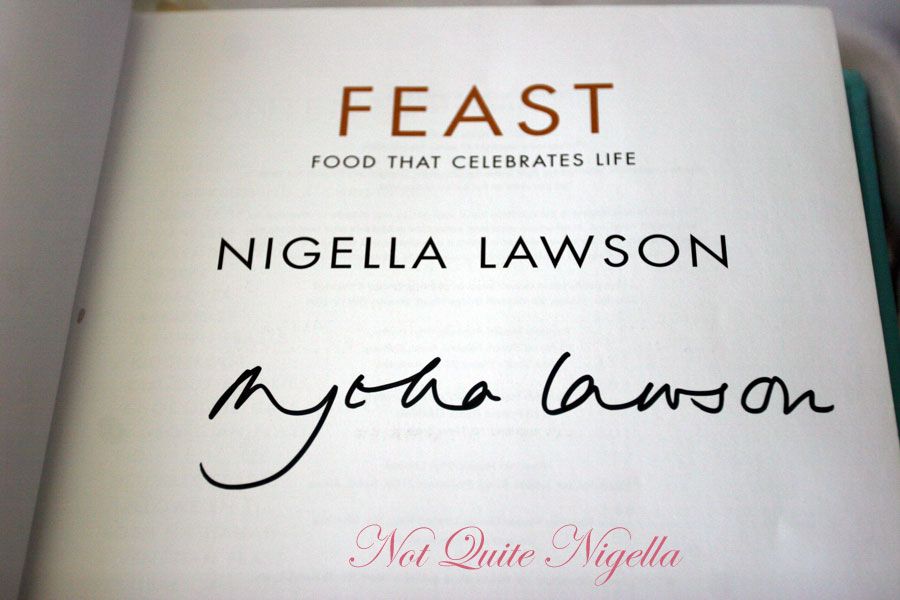