Gordon Ramsay at the Good Food and Wine Show Sydney 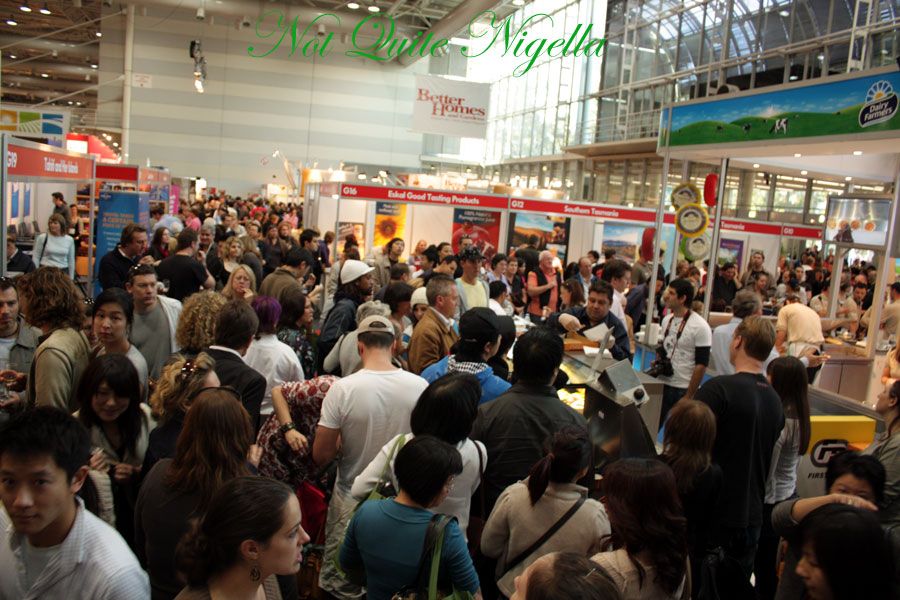 Having the pleasure of seeing Mr Ramsay cook doesn't always come cheap. I was lucky enough to get some Front row centre tickets as I made sure I was online the second they went on sale but looking at ebay just a couple of weeks before the show, I saw that a pair of tickets had sold for $350 (plus the book but lets face it, they weren't after the book). So I hung onto my precious tickets and guarded them with my life. It's a good year for me, I've already met my favourite female cook Nigella and now I am meeting my favourite male chef.[ 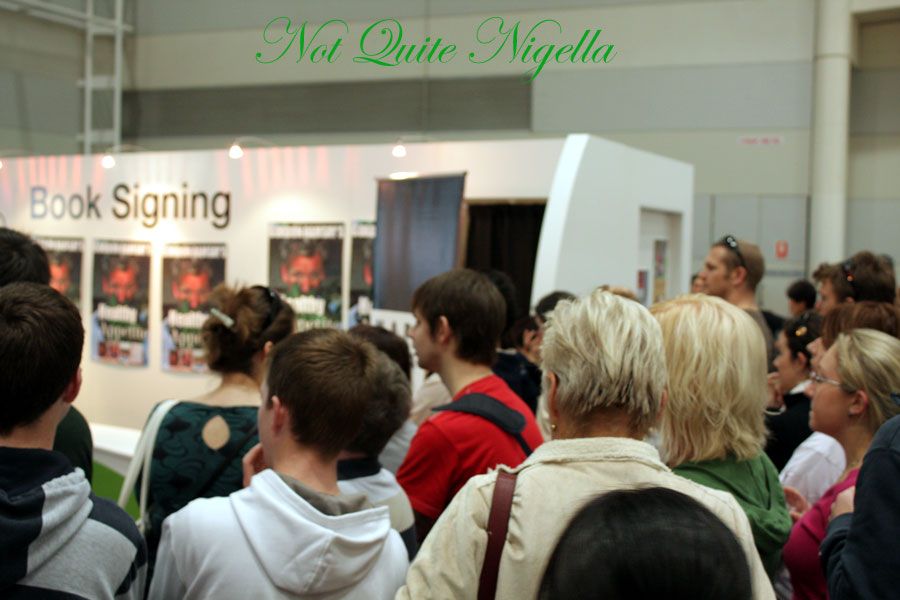 Crowd waiting for Gordon to arrive for his 1.30pm book signing

We met friend Gina, Teena and Philippe at noon and slowly made our way around the show. The crowds were thick and in a lot of cases unmoving. Gina vowed to visit next year on a Friday such were the crowds around some stands. 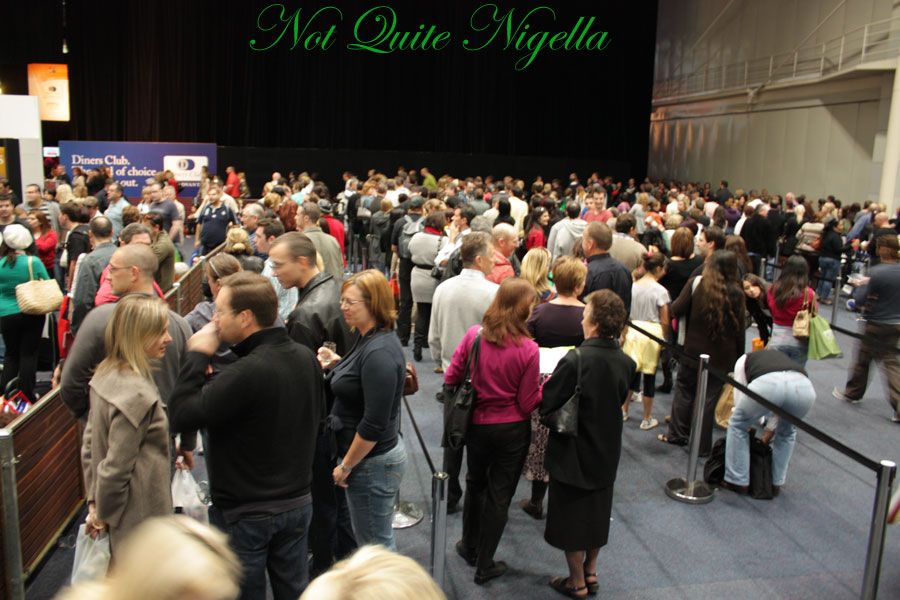 The line is large for Gordon and everyone is excited. They've expanded the size of the theatre due to demand for Gordon's shows (they put up the price of the second wave of tickets to cover the cost of expanding the theatre). 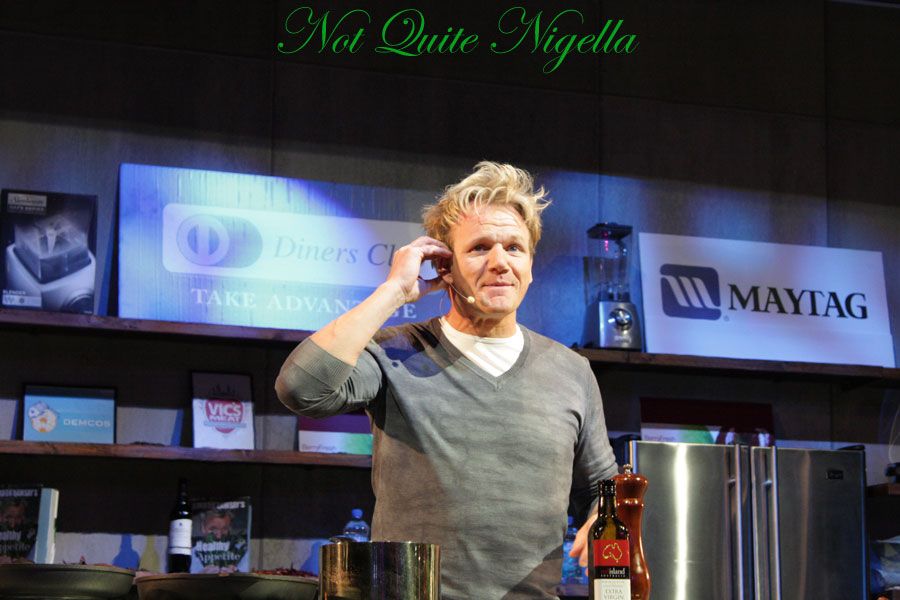 We have brilliant seats, front row centre left, right in front of him cooking. There's a bit of a warm up and prize giveaway prior to Gordon entering with his right hand man from Claridges Mark Sargeant whom I remember seeing on the F Word. There is a lot of clapping signalling that the crowd is restless and doesn't want to hear any of the preamble, they just want Gordon. And after several "Here comes Goooordon Ramsay!!", the man finally appears. He looks exactly like he does on the show and women everywhere swoon. 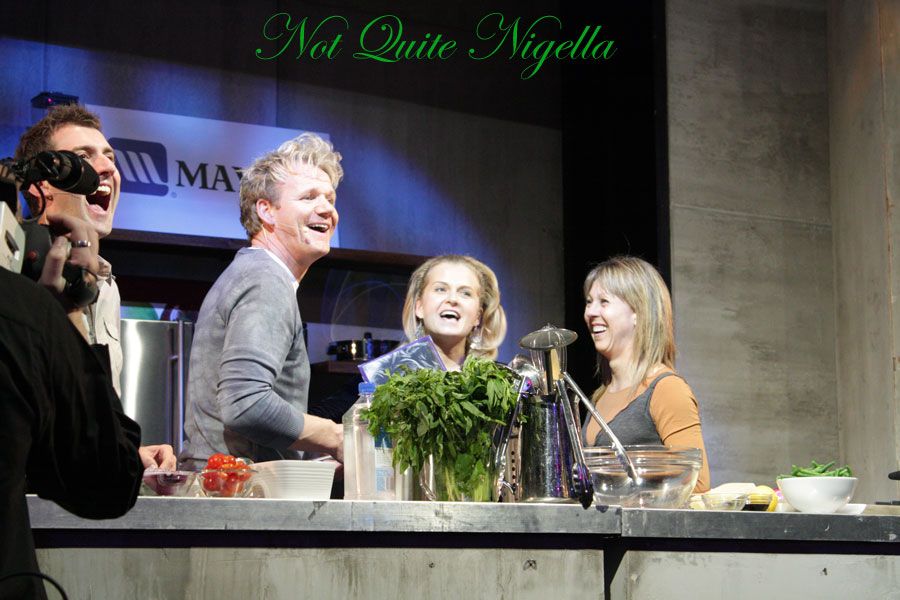 It's like a culinary version of Beatlemania with two girls running up to the stage with Gordon masks on sticks and declaring him their idol and asking for hugs. Several girls stop him during the show when he walks into the audience area and demand hugs to which he happily obliges. 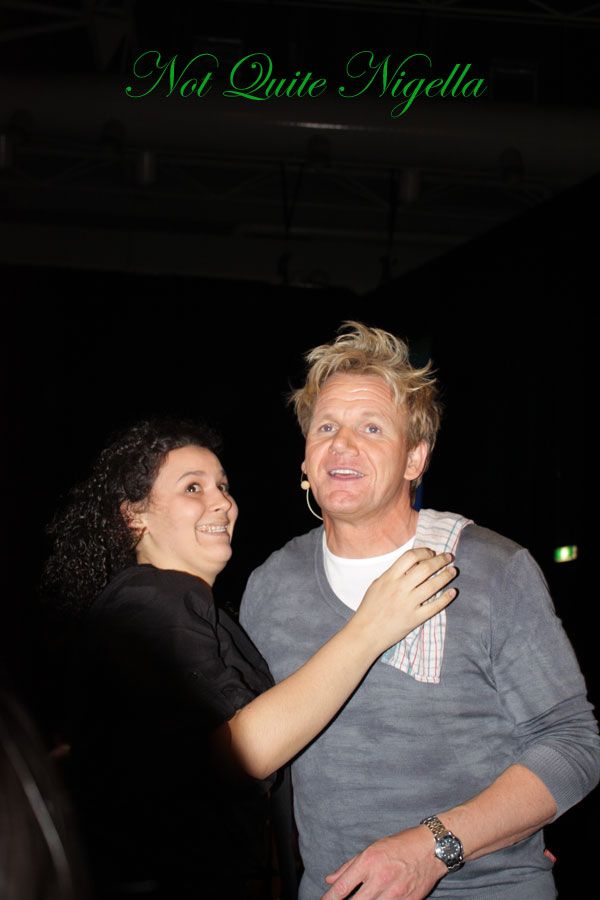 Another fan wanting a hug 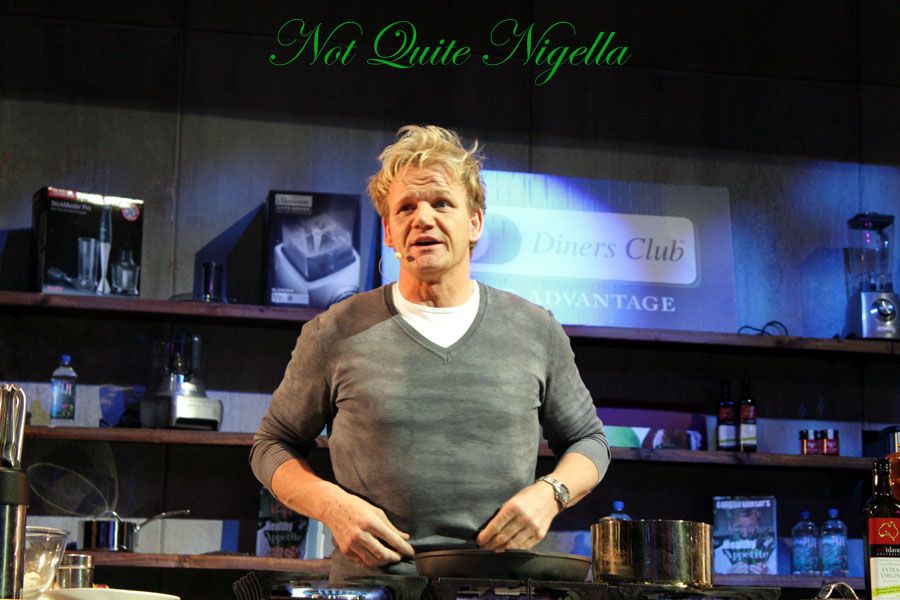 Gordon on stage is exactly what he is like on tv, except with a little less swearing and if you watch Hell's Kitchen or Kitchen Nightmares, a lot less anger. He does manage to insult (in his charmingly blunt way) a slew of celebrities: Dannii Minogue for being plastic and melting in front of the oven and for having body parts less than 6 months old, Lisa Wilkinson (host of the Today show) whom he says has a penis, Anthony Worrall Thompson for winning the ugliest chef award 35 years running, Jamie Oliver for being a "fat tongued fat git" who makes fattening food and Matt Moran for having a poor turnout to the show ("They moved the curtain 4 rows from the front so Matt thought that it was full of people") and of course the Diners Club sponsor when he whipped out his Black American Express card. 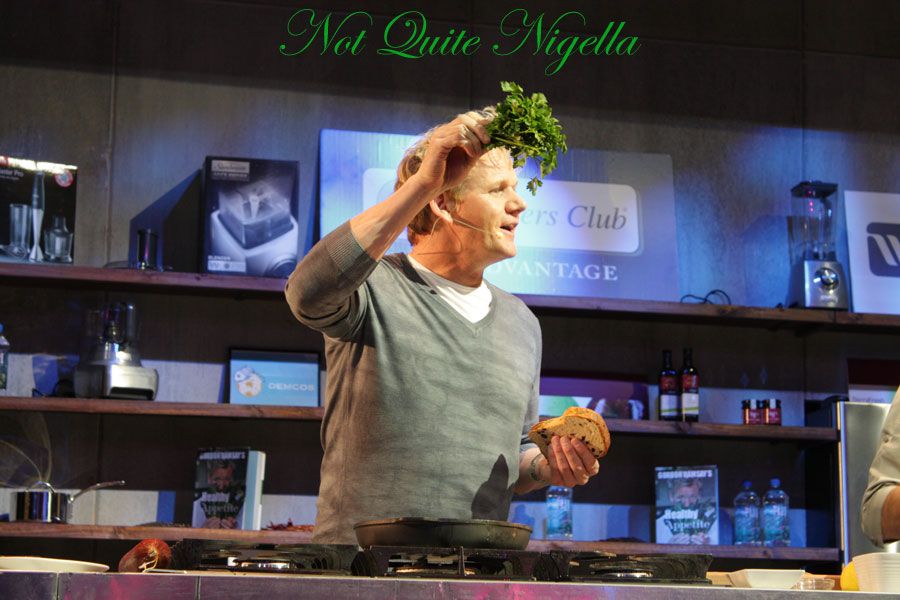 "Is this the size of your bush?"

He even makes fun of the audience and recalls falling in love with a French woman when he lived in France and asks if there are any French women in the audience. There is only one and he picks up a bunch of herbs and asks her "Is this the size of your bush?" to which she declares that hers is actually bigger. 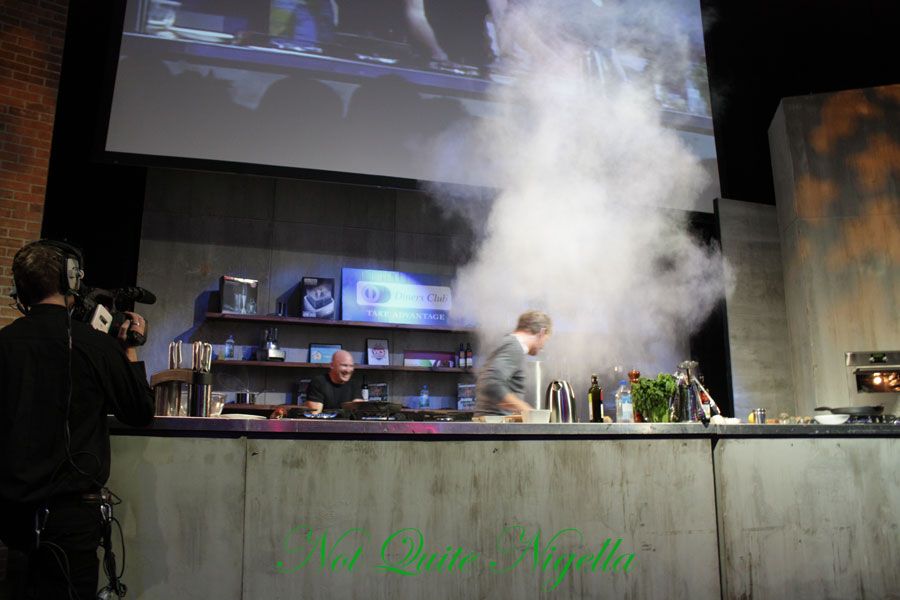 During the show Matt Moran bursts on stage with a fire extinguisher which sprays both Gordon and Mark, probably as revenge for his earlier comment. 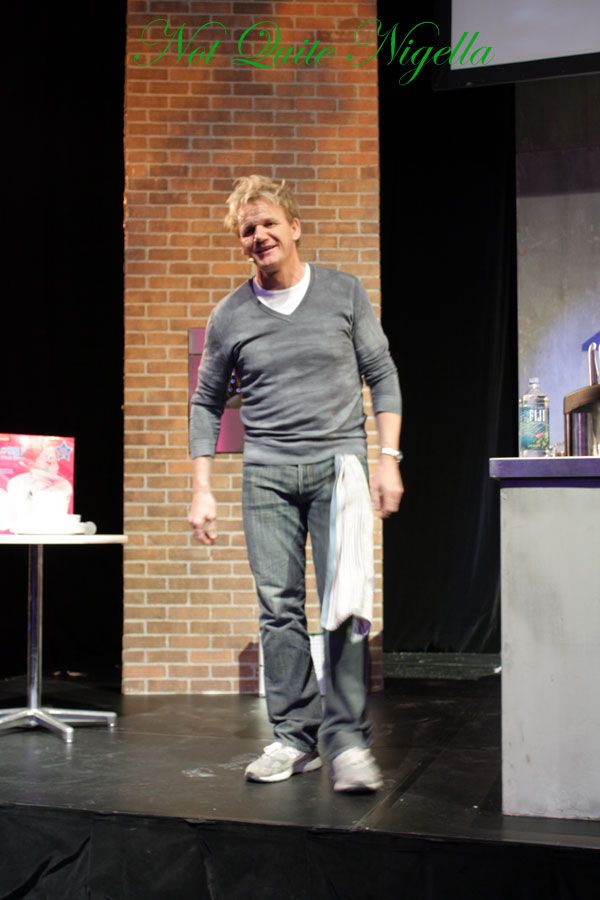 Gordon's little exchange with me 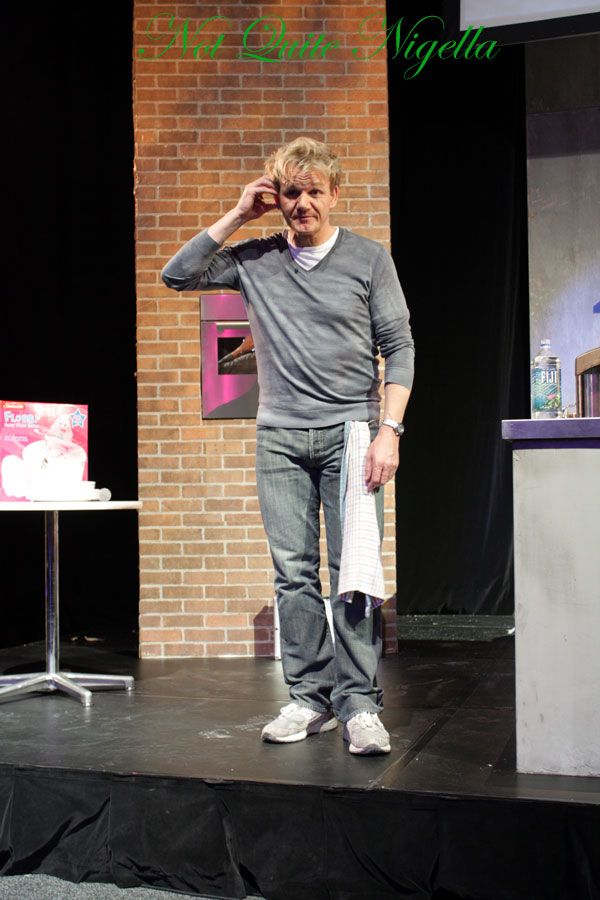 I even had an exchange with Gordon himself while he was on stage. He pretended that he'd left copies of his cookbook under our seats but hadn't so everyone got excited for a second then realised he was taking the piss. My friend was quite vocal in her "Awwww no!!" so he said to her "Did you think I'd put 2000 copies under everyone's seat?" and she shrugged so I yelled out "Oprah would have!" and he laughed and touched his heart and says "Oh shit, really yeah I feel bad now". Then he said "Where's your husband?" and I pointed at my husband sitting next to me behind the camera and he said "Well he's a lucky man". Aww I feel touched by god! 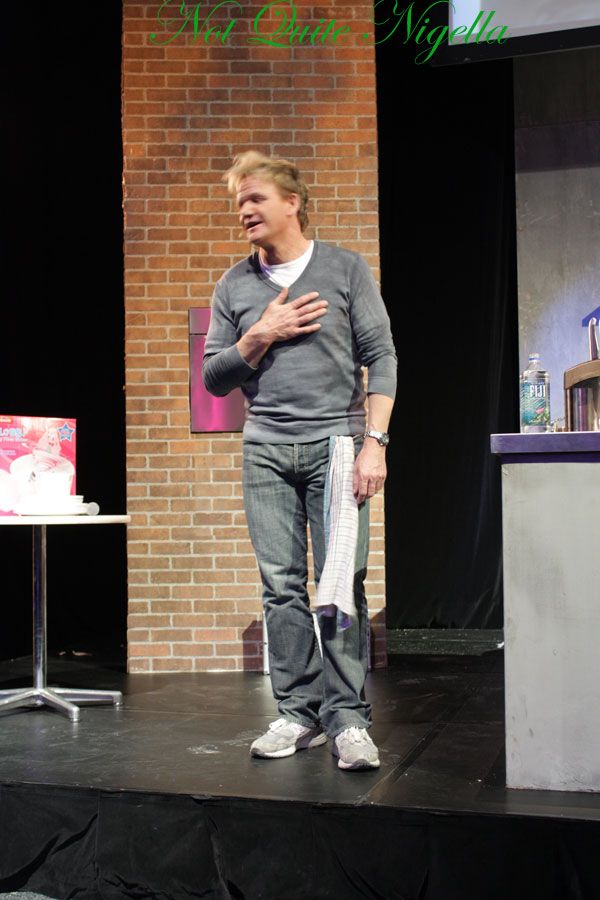 _Hand on his heart feeling bad that he hasn't given us the books, Oprah style _;)

While he is cooking, he gets a little more serious and explains tricks and rules to perfecting the dishes. He makes three dishes, a chorizo and bean soup, a lamb dish with a balsamic sauce which looks delectably luscious and a Pain Perdu (french toast) all intended to be dishes that you could make everyday from leftover ingredients. 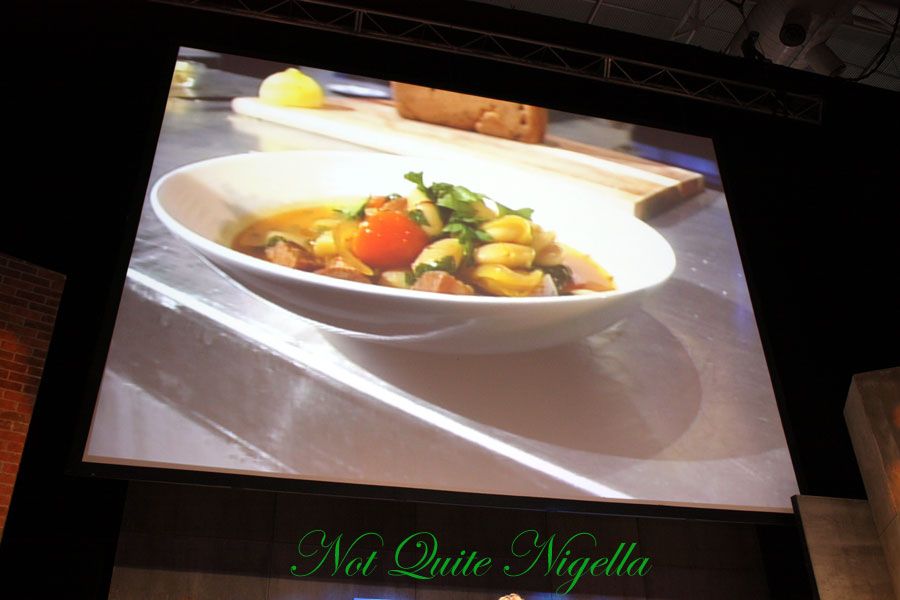 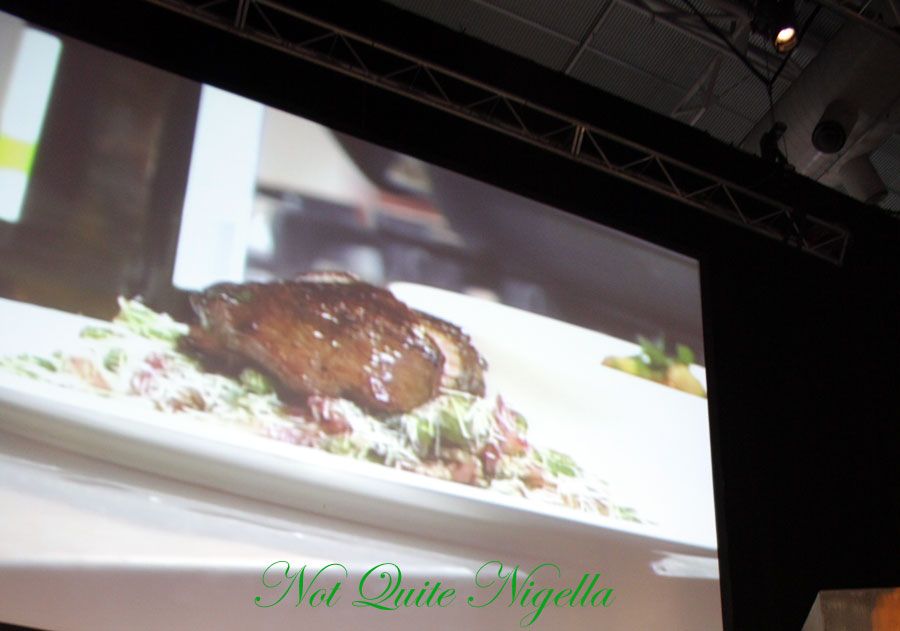 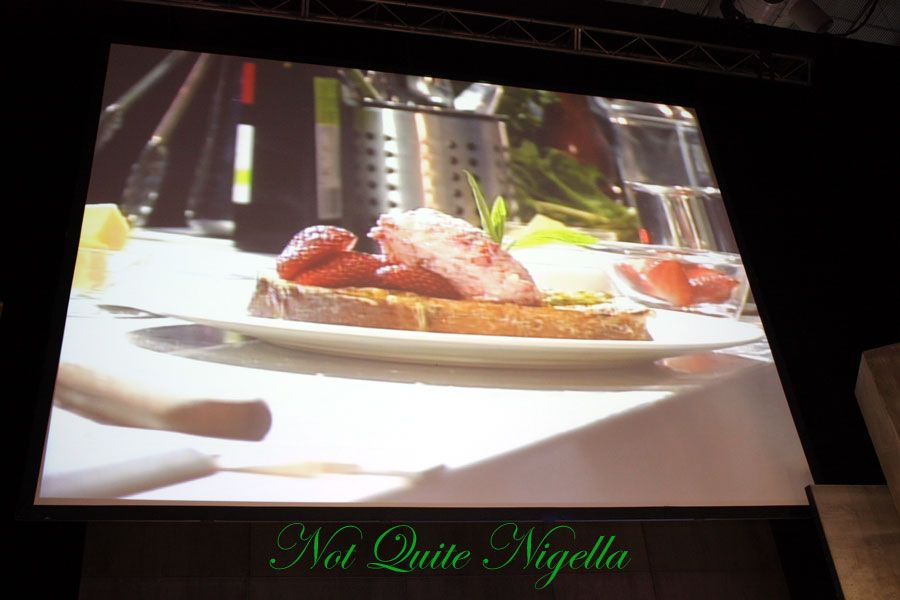 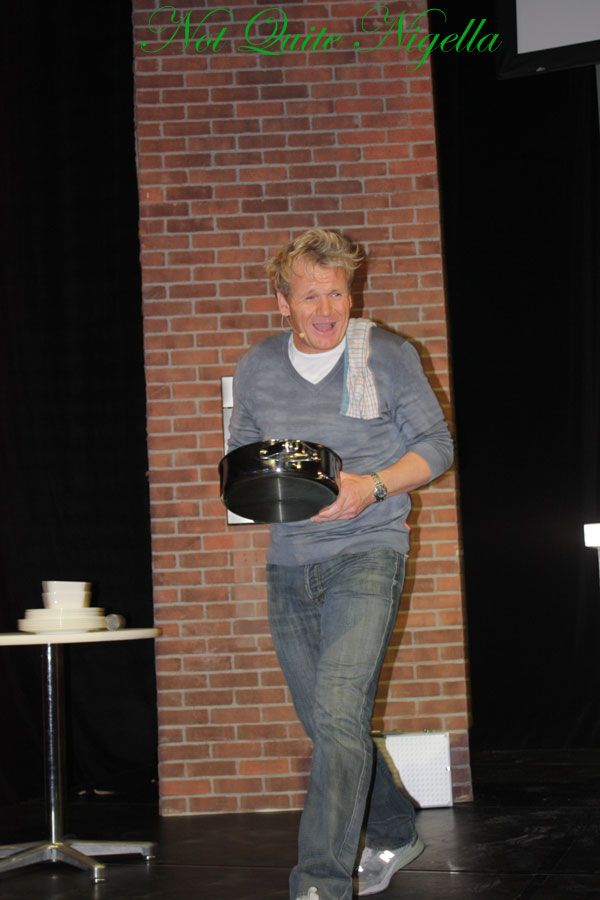 After all of the cooking is done, he gives away items from the set to lucky audience members. 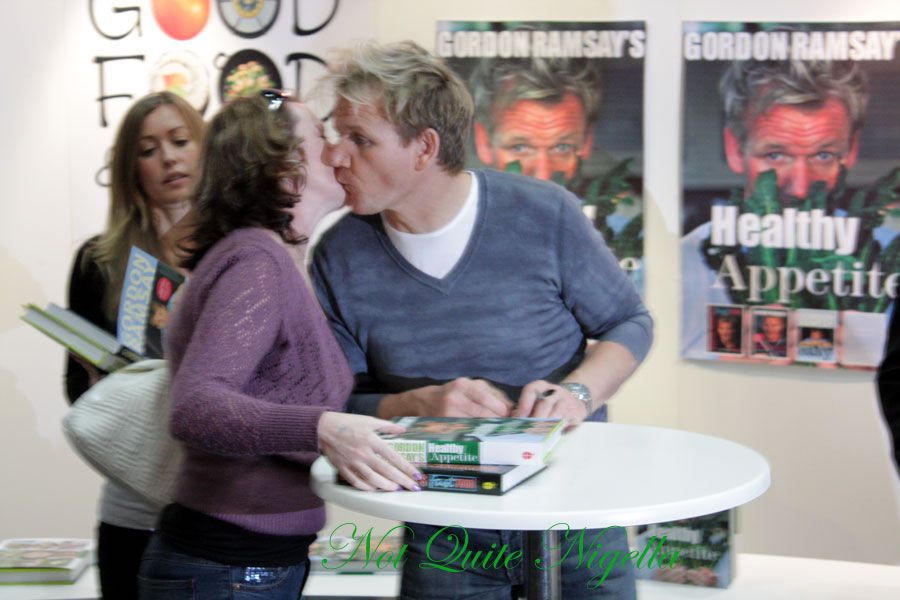 After this, he is off to his last book signing of the day where I tried to get my DVDs signed but they had cut the line off after a certain amount of people. As Gordon took time to chat and shake the hand or kiss and take a photo with every person in the line, the amount of people was relatively short but well rewarded. Whilst I would've loved a kiss and my DVDs signed I was happy with my small brush with Gordon! 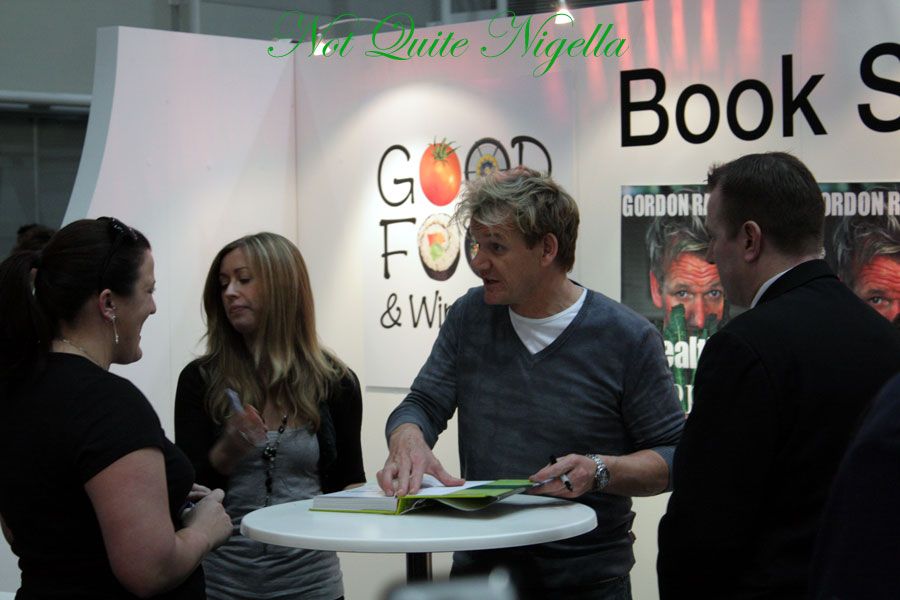 Gordon signing one of many autographs 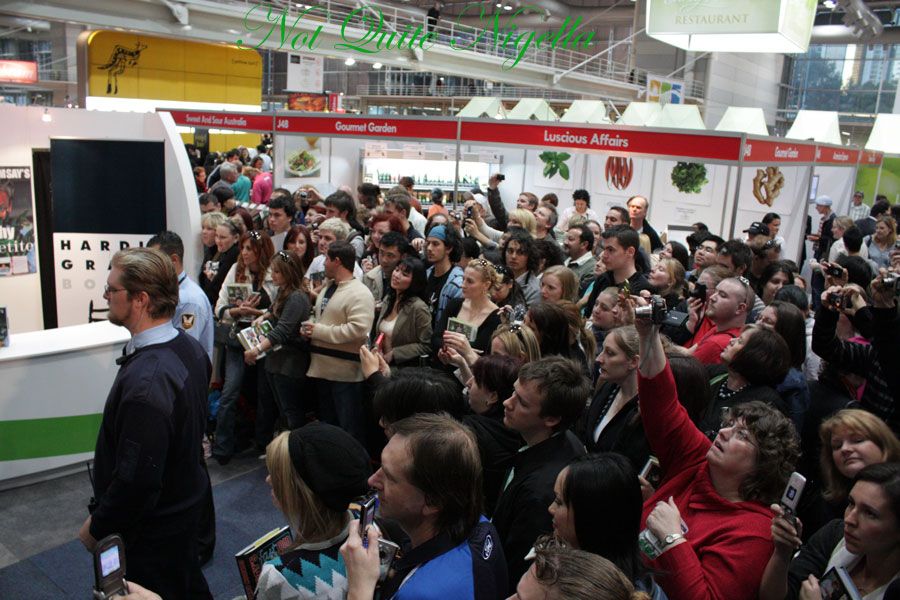 And of the stands on offer, there were plenty of delicious morsels to be had, loads of samples and lots of great bargains. 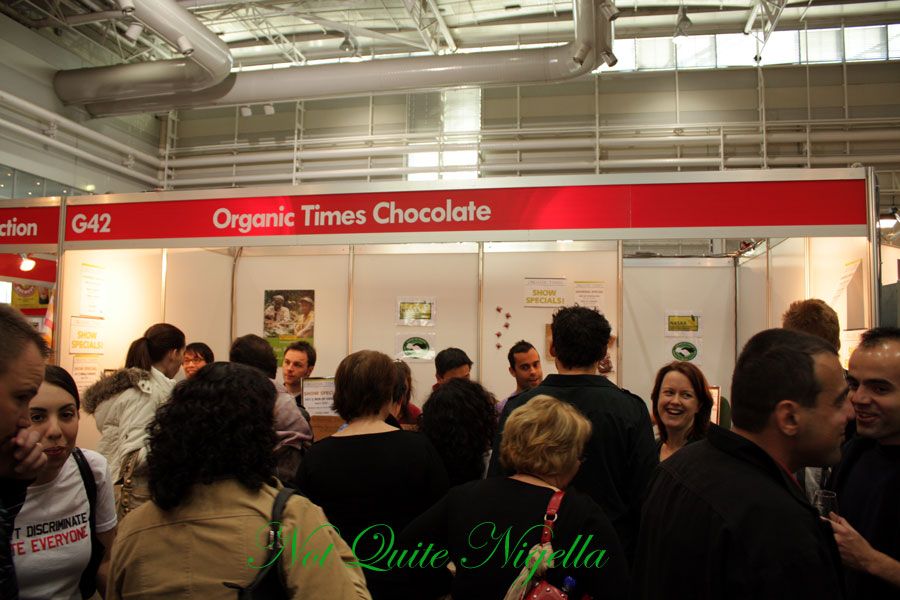 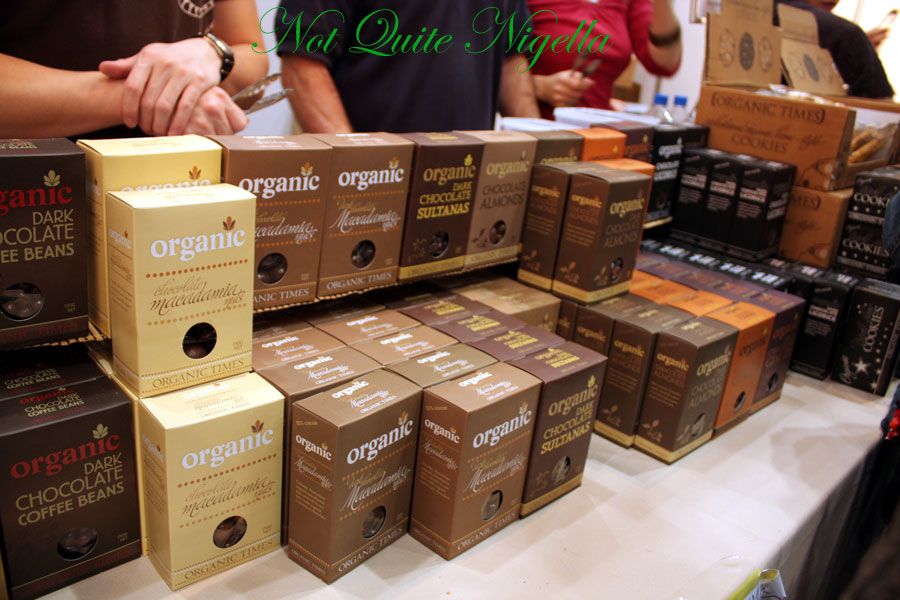 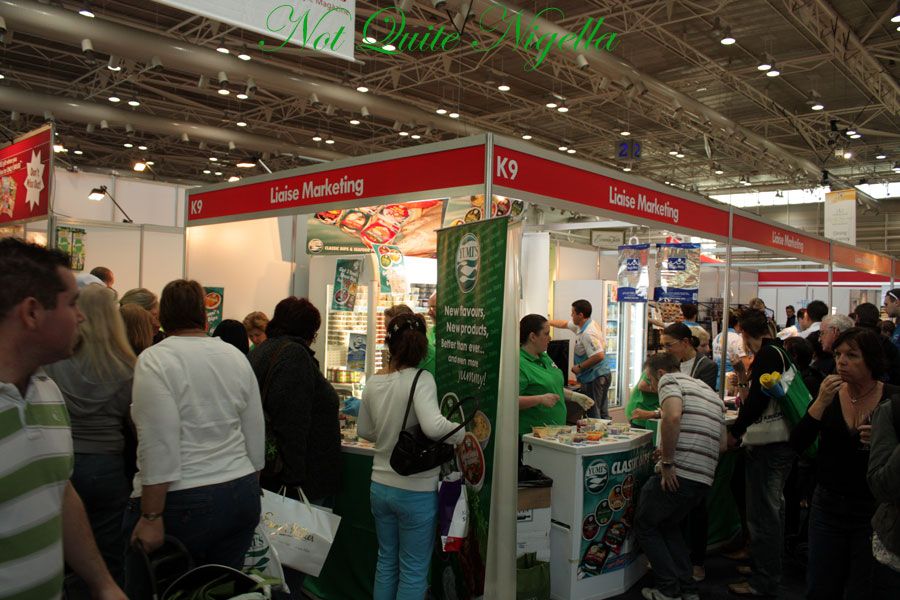 Another favourite stand of mine every year is Yumi's dips which I adore. I especially like their olive dip, tuna mousse, smoked trout mousse, egg salad, pumpkin and Mediterranean eggplant dip and we buy up big here. As it is the last day, they offer us 7 dips for $12 which is a huge saving. I would have bought more except I know that I will be away for a month so I won't be able to eat the fish dips. 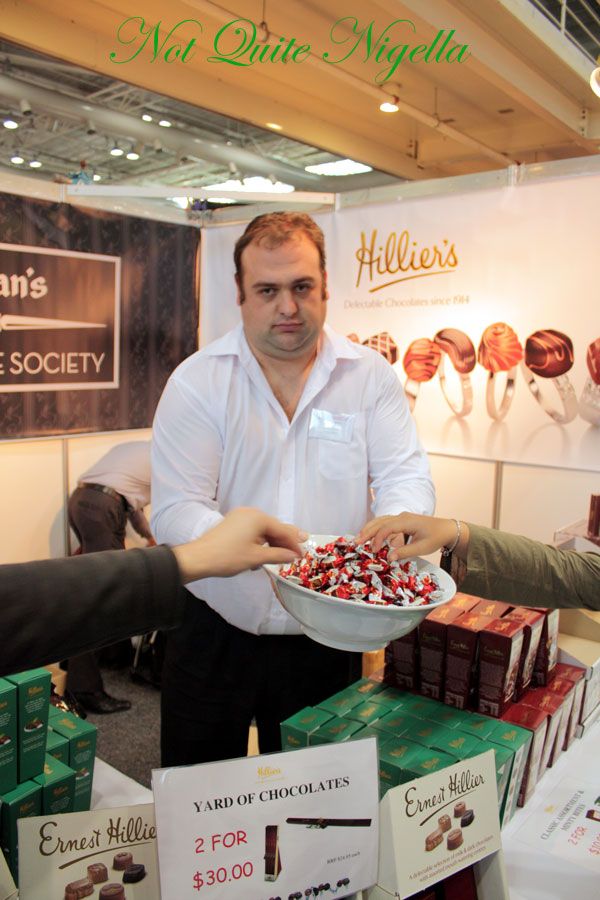 Hillier's chocolates offering is a huge bowl of wrapped chocolates. Despite his sad expression, the caramel ones were especially good :lol: 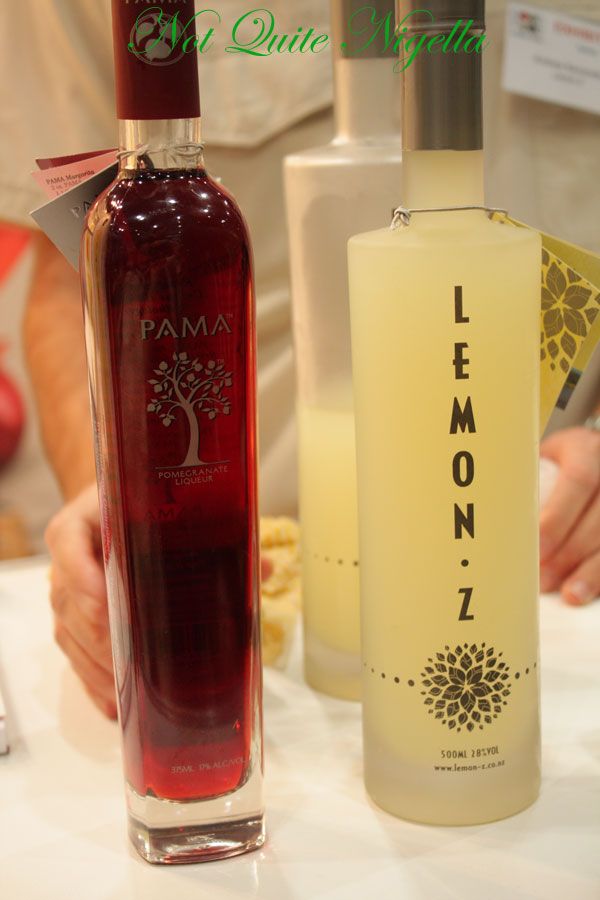 Pomegranate seemed to be the juice flavour of this year's show with a couple of Pomegranate juice manufacturers as well as this Pomegranate liquor. I didn't have time to try but I did love the bottles! 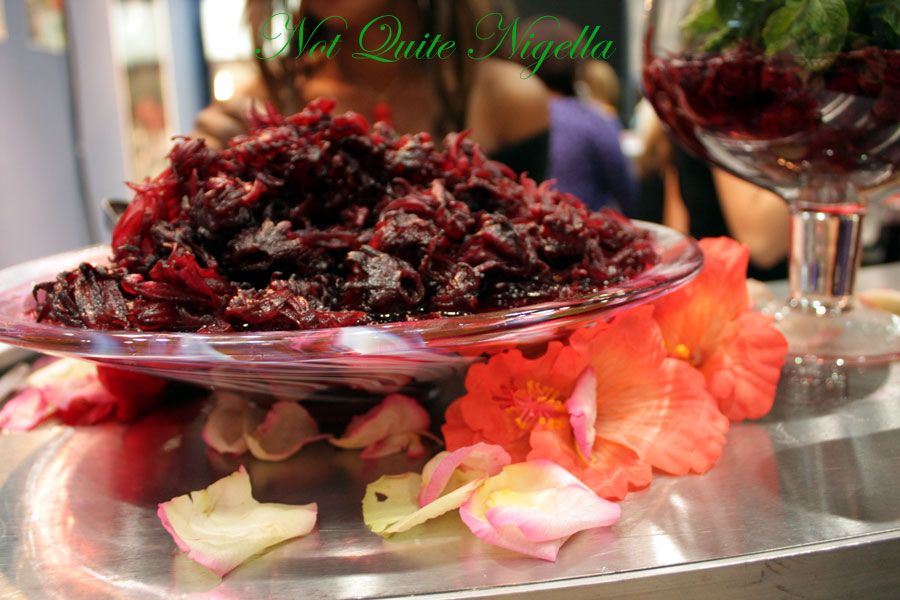 There were also whole hibiscus flowers soaked in Vodka. They had an interesting texture, much like beetroot with a sweetness from the flower itself and kick from the Vodka. 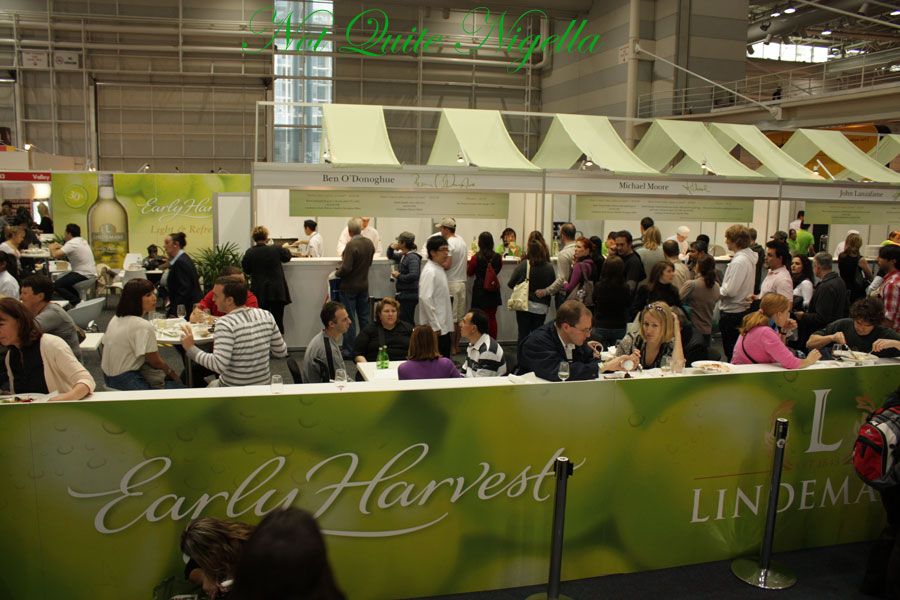 For those interested in eating lunch in a non bite sized sample portion, there were celebrity chef eateries churning out dishes. 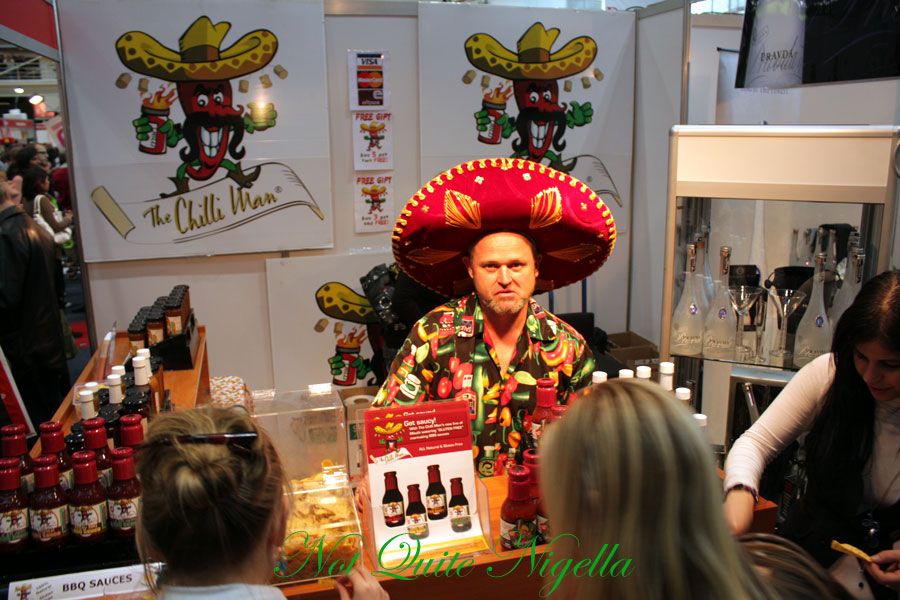 I would probably have this expression if I had to wear the hat. Perhaps my husband was mocking him when he took the picture, hence the rather fierce expression. 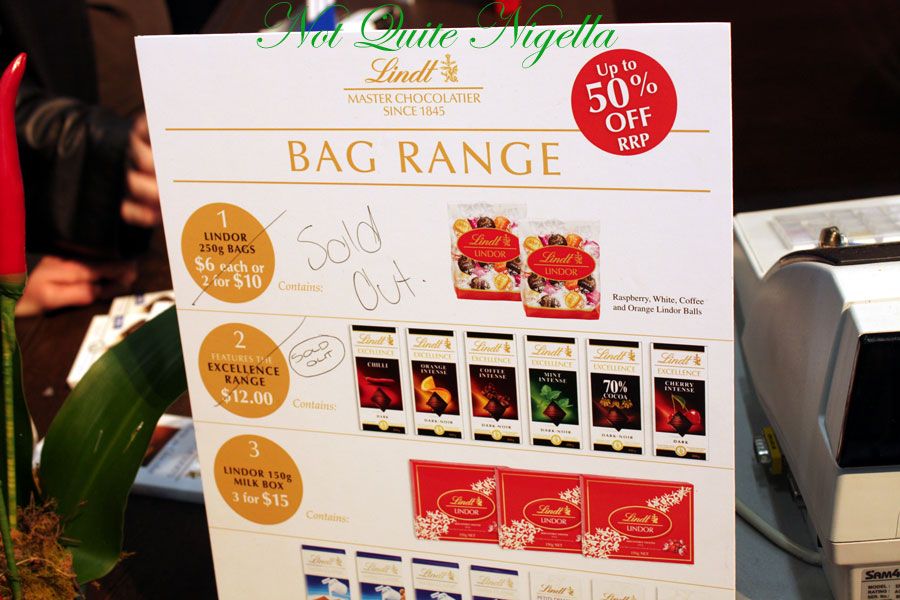 We got to the Lindt stand a bit too late and missed out on the Lindor ball bags. Ah well, we still had lots of Organic chocolate.

All in all, it was another great show this year, made 100000% times better by the presence of Mr Ramsay. I don't know how they will top that next year. After all, there is just one Mr Gordon Ramsay. 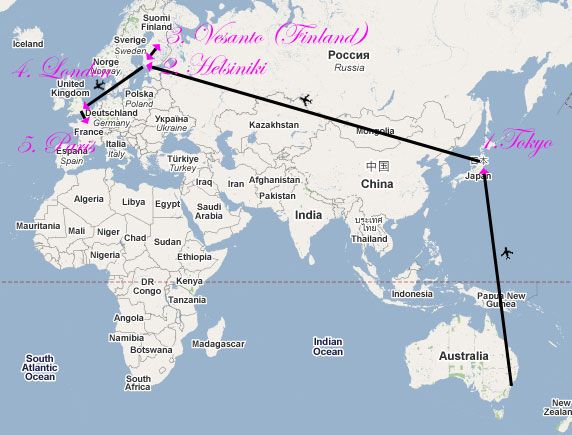 And Dear Reader, whilst you are reading this, I will probably be on a plane on my way to Tokyo, probably eating a dodgy airline meal (and of course photographing it). I shall have limited access to the internet for the first 10 days that I am away but will post stories every day so please feel free to make comments, I'll approve and reply to them when I get more internet access, probably somewhere in Finland, our second destination. After Finland we will go to London to stay with my sister (where I will have unlimited internet access) and then a few days in Paris. Rest assured this will be an eating tour of these wonderful cities so once I am back in London, the tales of the bizarre, kitsch and delicious will flow.