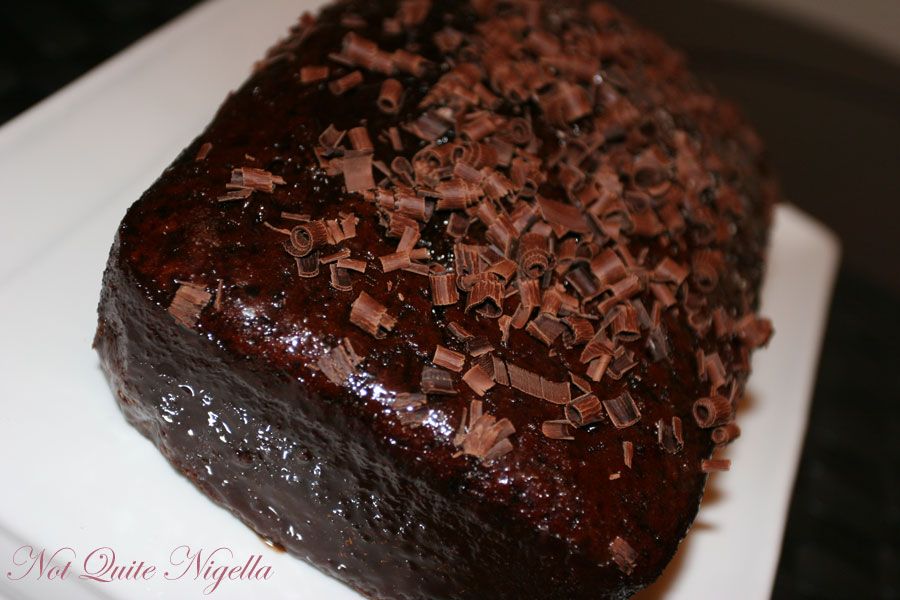 Now I know that double cream and double cheese is decadent, I've even had triple cream and that was heavenly debauchery. The mere thought of a Quadruple Chocolate Loaf Cake seems almost wickedly lustful and wanton! I'm almost rendered speechless except to say YES YES YES!!! Let me lock my door just in case, before I proceed...

I've made cakes with syrup before (eg the South African Malva pudding by Art Smith on Oprah) and they are without exception, wonderfully moist. And the poking of the cake prior to dousing with syrup can only be therapeutic and if that doesn't help with stress, the resultant cake should do the trick.

I should confess right now that I was in a rush and accidentally added the 25 grams of dark chocolate into the syrup itself instead of reserving it for the chocolate flake garnish. So instead of making a Quadruple chocolate cake, I inadvertently made a _Quintuple _Chocolate Cake! 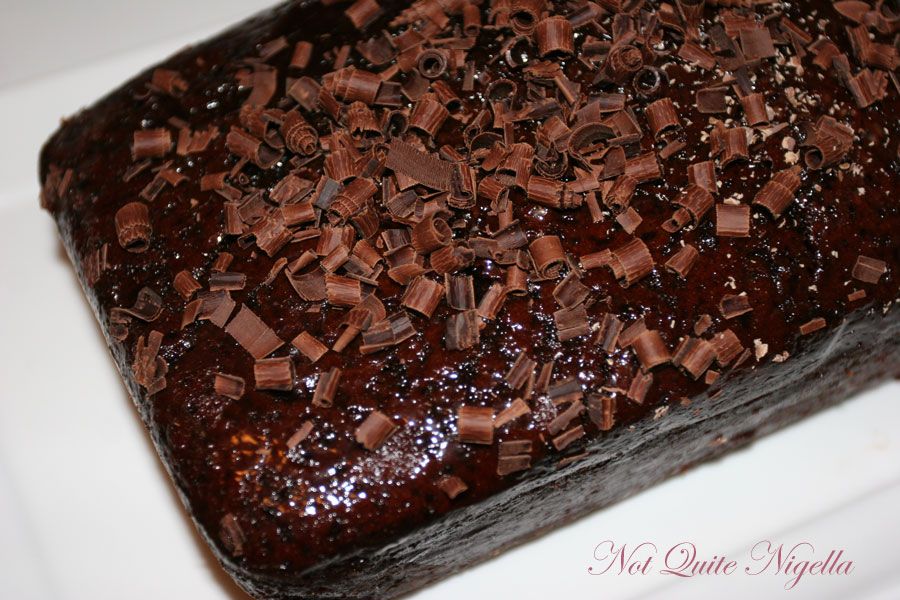 Needless to say, this is an extremely rich cake. A thin slice would be enough for any hardcore chocoholic. The cake itself is wonderfully moist and delicate and keeps for several days without drying out. I'd actually suggest making the chips even smaller as the chocolate sank to the bottom of the cake making the bottom third a very rich and indulgent almost solid chocolate layer. Unless of course you like living life on the edge... 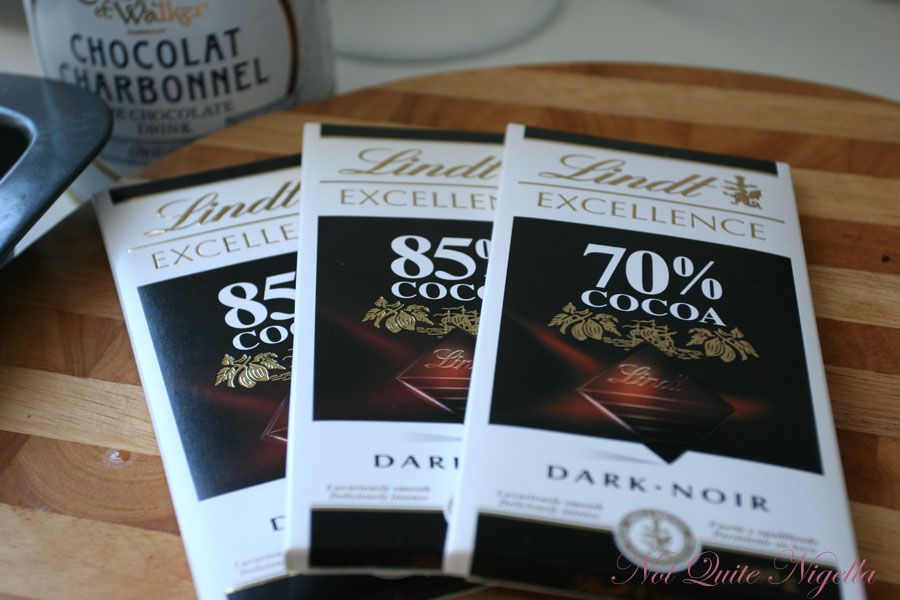 Preheat the oven to 170C. Grease and line a loaf tin (21 x 11cm and 7.5cm deep). Put the flour, bicarb, cocoa, sugar, butter, eggs, vanilla and sour cream into a food processor, and blitz until it's a smooth, satiny brown batter. Process again while pouring the boiling water slowly into the mixture. Turn off the processor, and stir in the chocolate chips.

Pour the fairly runny batter into the loaf tin, and bake for an hour. When ready, the loaf will be risen and split down the middle, and a skewer should come out fairly clean. 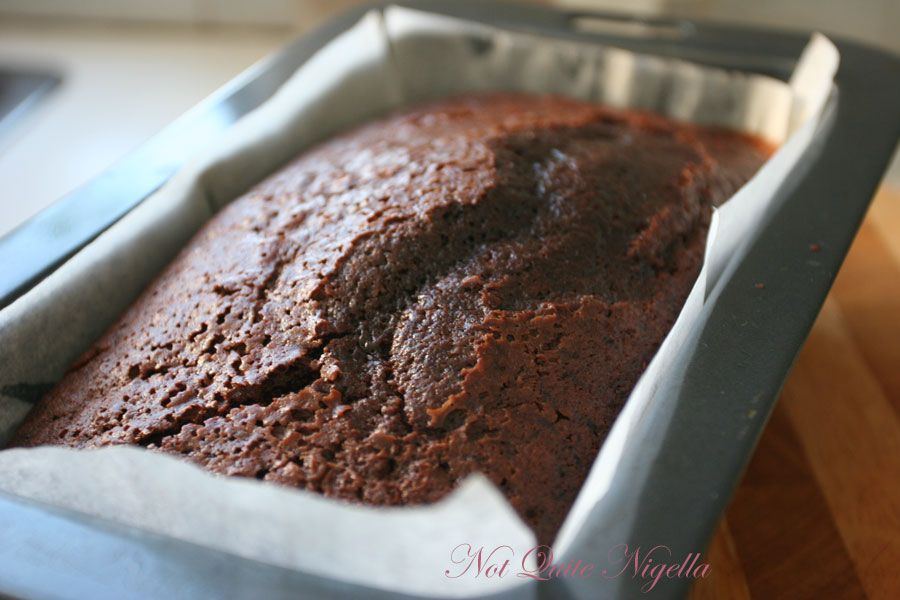 Just before the cake comes out of the oven, put the syrup ingredients of cocoa, water and sugar into a small saucepan, and boil for five minutes. What you want is a reduced liquid, a syrup. 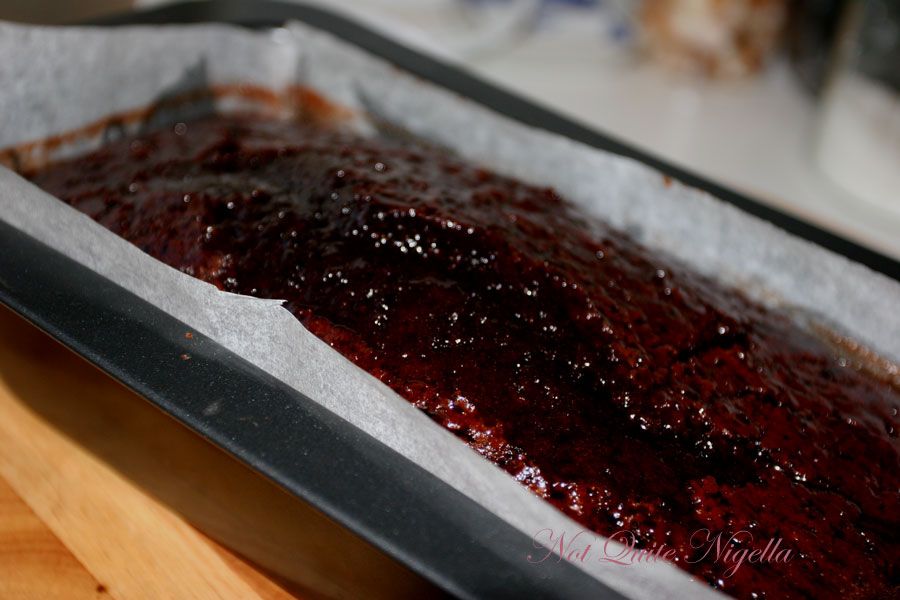 When you've taken the cake out of the oven, pierce all over with a skewer, and pour the syrup as evenly as possible over the cake. Let the cake become completely cold, then slip it out of its tin, removing the paper, and place it on your serving plate. Get your chocolate, and slice thin slivers off the block with a heavy knife, until you've got enough to cover the top of the cake. If required, spoon a little extra syrup so that the chocolate will stick to the surface.

From _Feast _by Nigella Lawson

P.S. If you click on the photo below, you'll see the rich dark chocolate bottom layer. That's not syrup, that's delicious chocolate! 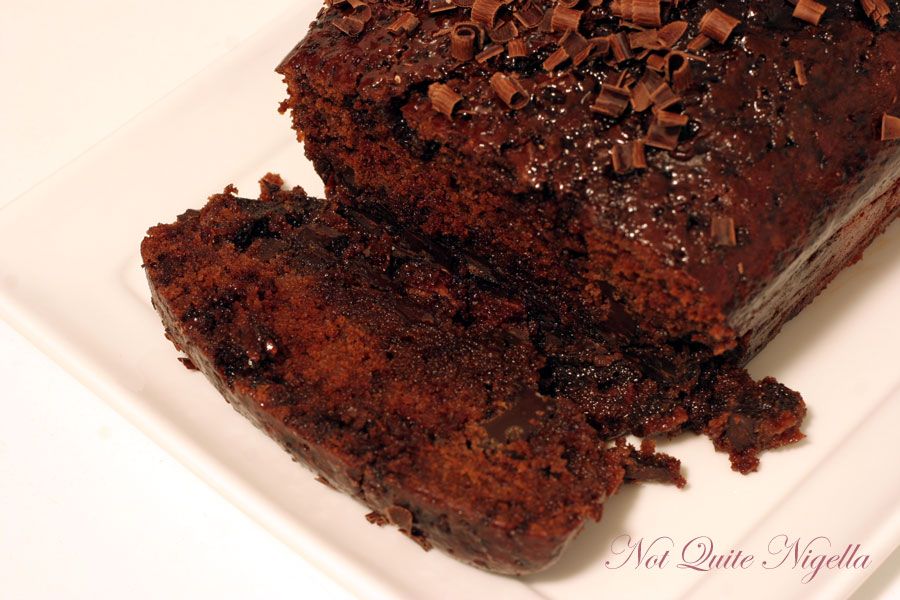