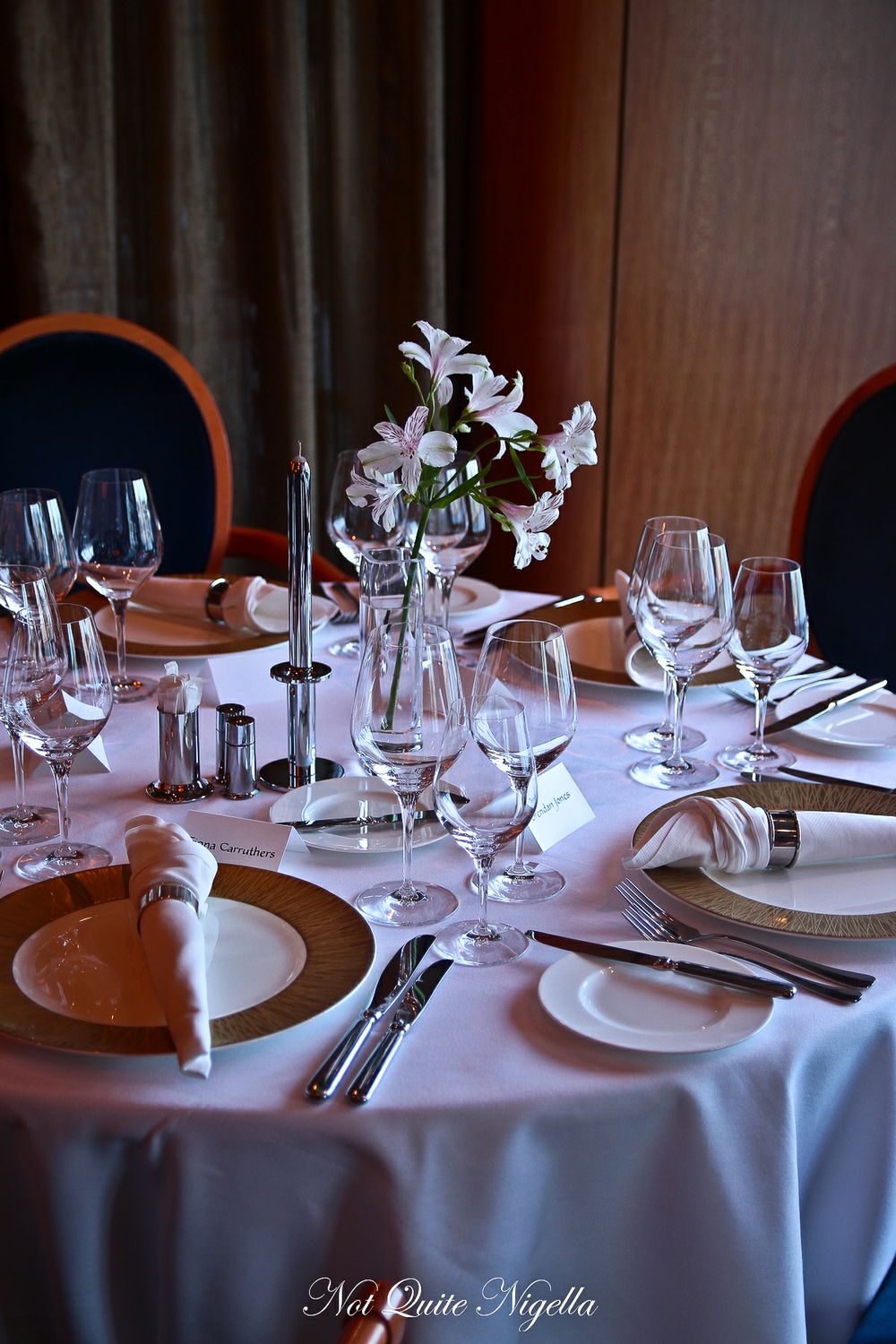 Dear Reader, I have to make a bit of a confession of a fear of mine. Do you know how people find ocean views quite soothing? I'm afraid I'm a little of the opposite and have a fear of open water. So cruises and things like that have really sort of passed me by. I know people that are addicted to cruising and I get it. I understand the idea of being able to visit lots of countries without having to unpack your bag is appealing to me too. But this is somewhat tempered by my image of food served on cruises-I'd imagine that it's sort of like eating buffet food a lot of the time. P&O's Executive Chef Ian Summers tells us that people on cruises often eat up to a whopping twenty two plates of food a person a day. 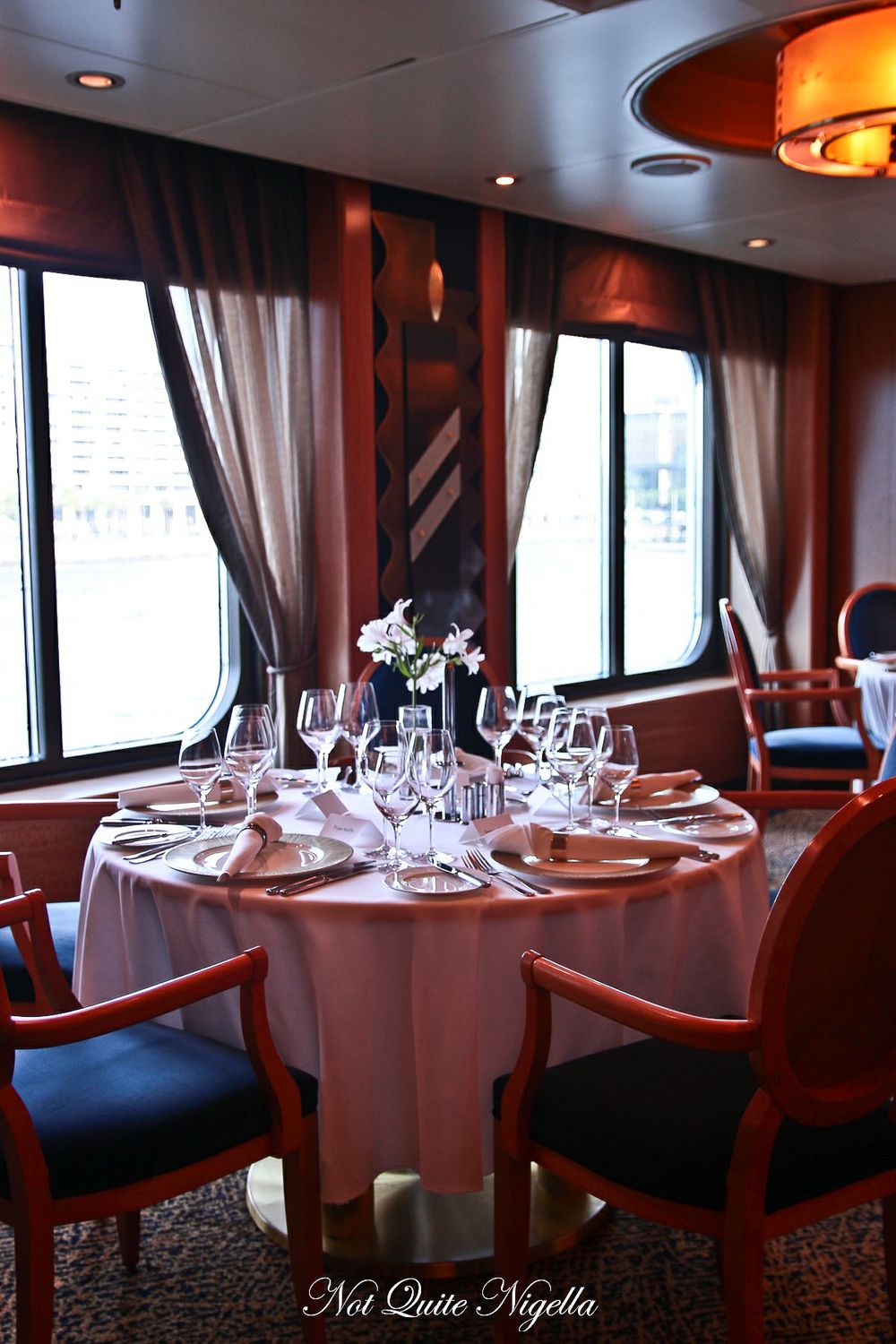 The image of a buffet on water is something that some cruise lines are aware of and it is now common to have restaurants by celebrity chefs as an upgradable option on cruises with each of these restaurants having a surcharge. To dine at Ocean Grill, acclaimed chef Marco Pierre White's restaurant on the P&O Aracadia, it costs £12.75 or around $19AUD/$19USD while dining at Luke Mangan's Salt Grill is around $40AUD/$40USD per person. The restaurants are relatively quite small, Marco's fits around 80-90 diners over the course of one evening. It is one of the 29 restaurants and franchises that he is involved with around the world and they have opened six Marco Pierre White restaurants on P&O's seven ships. 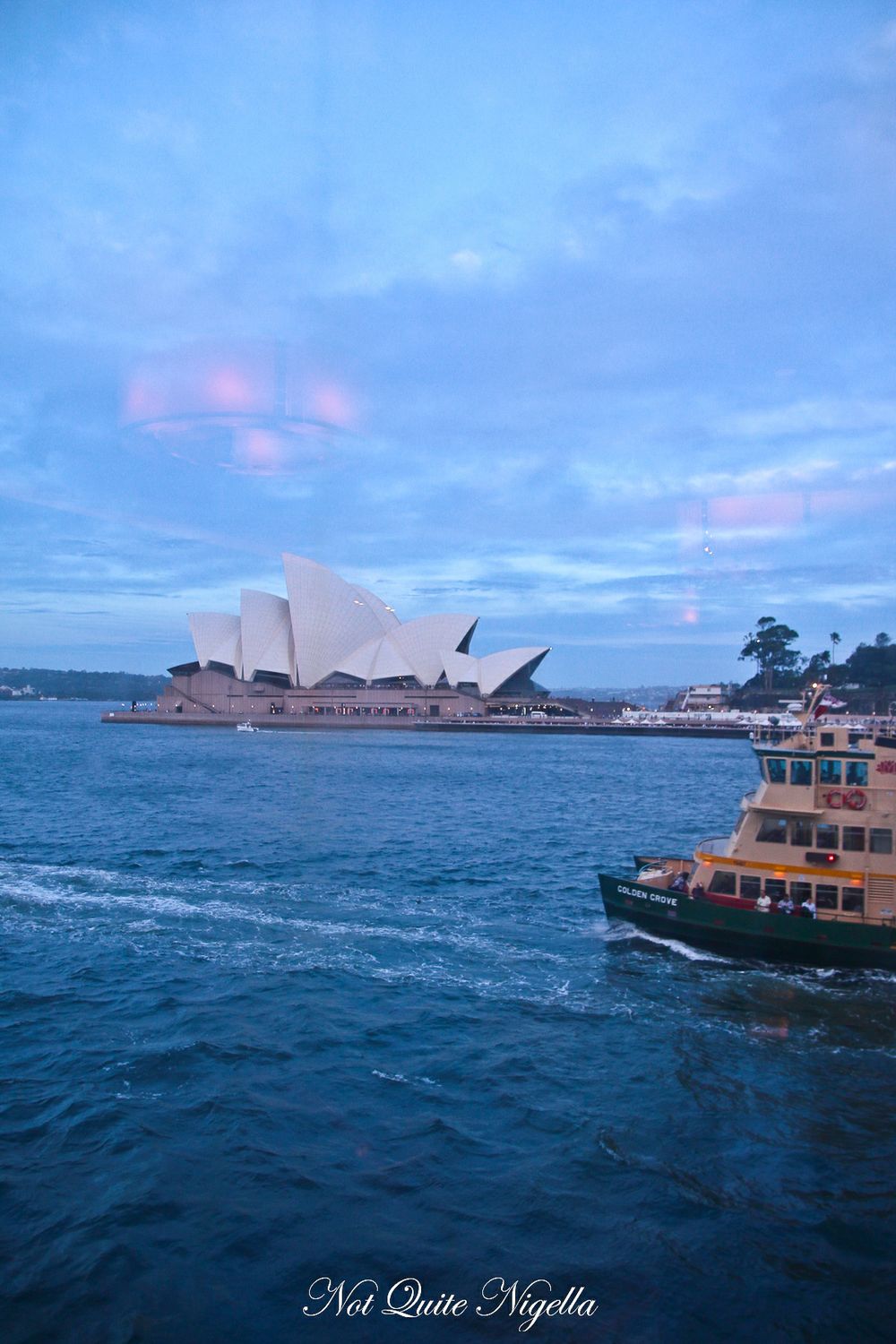 Marco is contracted to travel with the ships thirty days out of the year and this is mainly around the British or European areas. But in this case, whilst the galleys for the other restaurants prepare food in lots of thirty to handle the crowds, the kitchen for Ocean Grill is a smaller affair, around 80 square metres where all of the food is prepared to order. There was an attempt to open the Ocean Grill for breakfast as well as lunch and dinner but passengers preferred the idea of having something familiar at breakfast (and apparently, they need to stock certain English breakfast cereals and brands of British tea or there may be a mini riot! ;) ). 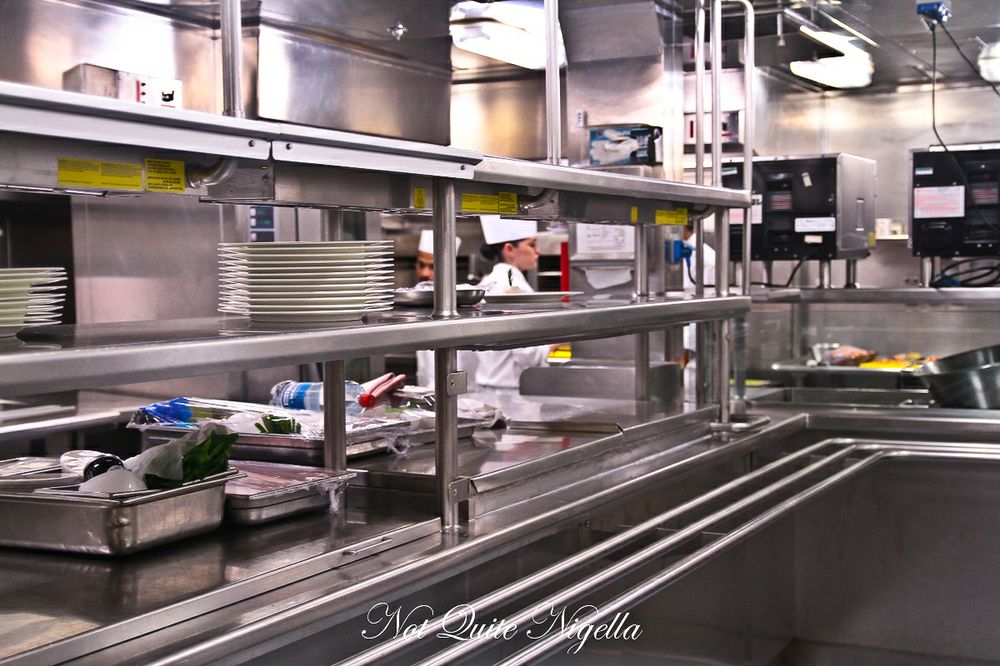 The kitchen for Ocean Grill

Tonight, the Arcadia is docked at Sydney's Overseas Passenger Terminal and we hand over our driver's licenses to security to board the ship (I guess in case we decide to stow away!). The Arcadia is on a 100 day world cruise and is an adult's only cruise. Because P&O is a British cruise line and starts at Southampton the passengers are generally older and British. The Ocean Grill's cuisine is in classic grill style with British classics like lamb rack and trifle and reflects the clientele. The decor is still very much in the vein of a cruise ship although Marco had a say in the decor of The White Room on the Ventura as that was a newly built ship. However, he chooses cutlery, glassware and tableware across all of the restaurants. 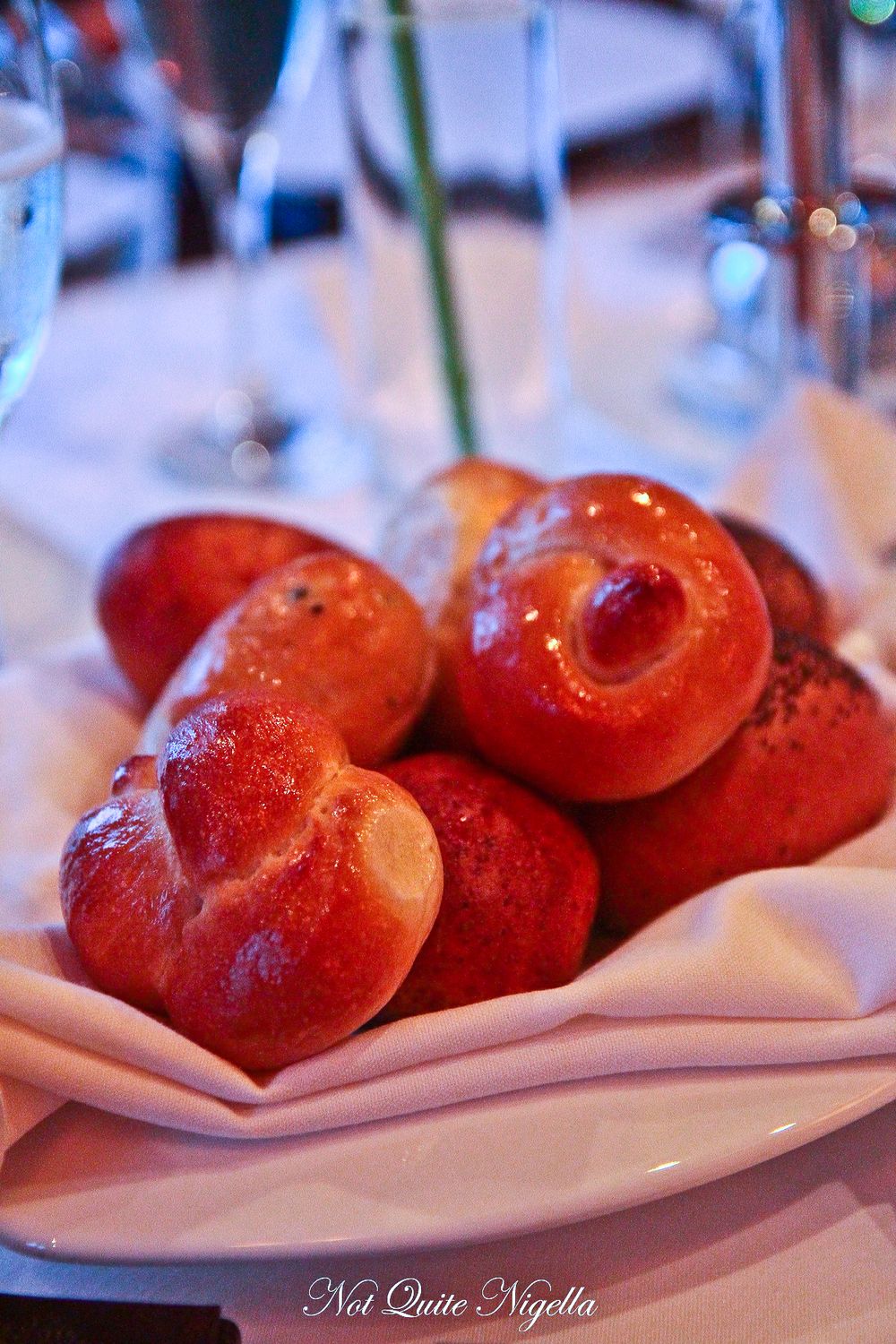 The rolls were very light, almost like airline bread, and served with unsalted butter. 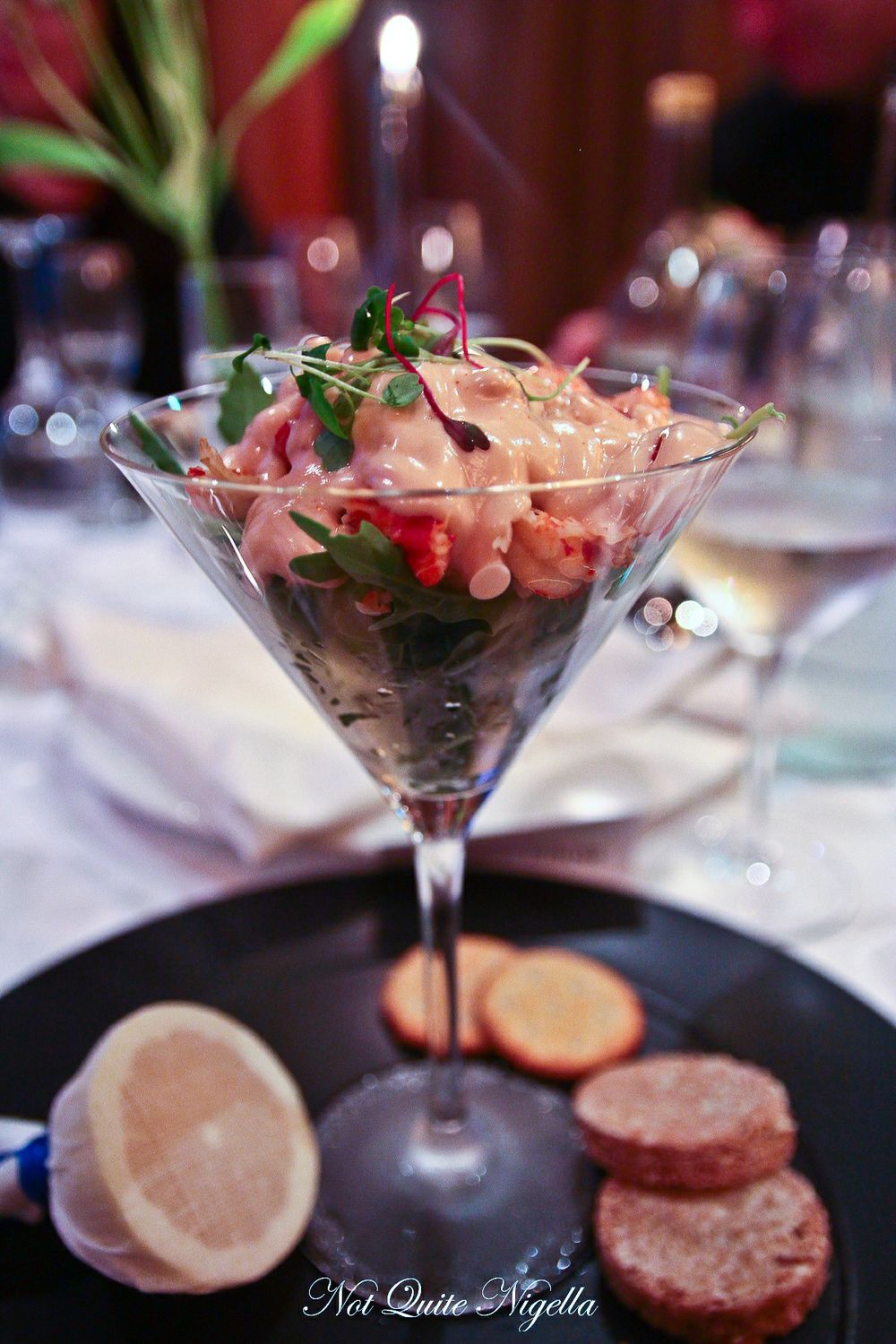 I was a little torn about what to order because the potted duck was recommended but I do love crayfish so I went for that. It's a generously portioned dish sitting on a layer of rocket. The Marie Rose dressing was made with fresh tomatoes that had been steeped in brandy to give it a more complex flavour that a traditional one.

The wait between courses was not long and service was very enthusiastic and deferential although there were some service issues as I was asked about six times whether I was drinking sparkling or still water within the space of about ten minutes and even though I mentioned I wasn't drinking wine that evening, I still kept getting asked if I wanted it as the glasses weren't removed. 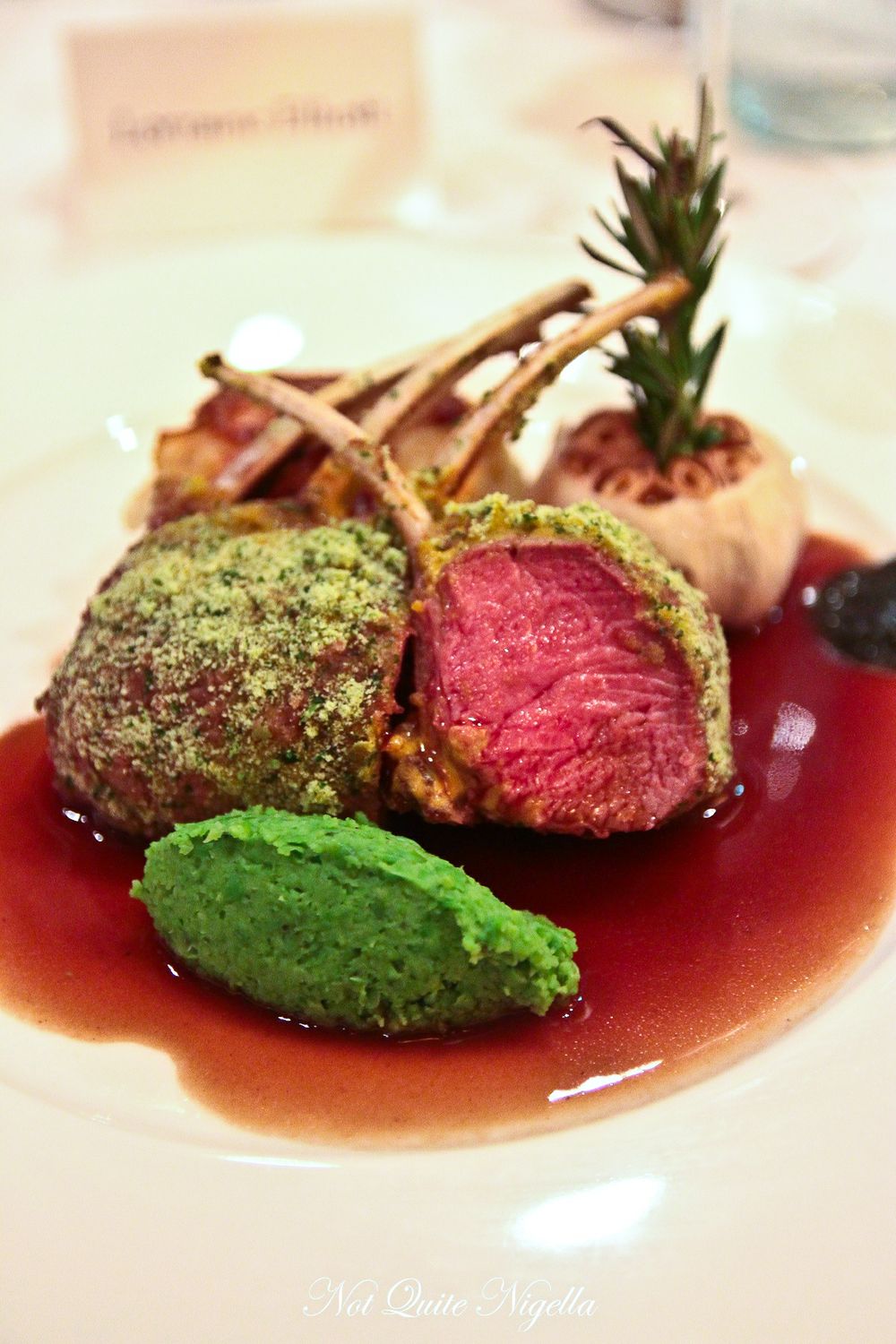 We had a choice with the Salt Marsh lamb rack being cooked either medium or well done. Chef Ian Summers told us that because health is a concern on ships (when you use a bathroom, you're asked to use a paper towel to open the door), they often can't cook things too rare because of potential food poisoning concerns. The Salt Marsh lamb is brought over from Gower Peninsula, Somerset Levels and Morecambe Bay in the UK where the lambs feed on samphire, sorrel and lavender along the coast which gives it its unique flavour profile. Ian also tells us that tomorrow, they're picking up 45 tonne of supplies from Sydney which includes kangaroo which will then feature on the menu. They also work about 25 days ahead of time to ensure that there is fresh food supplies for the ship and their enormous buying power allows them to buy good quality and cheaper prices.

The lamb is more cooked than I like and it's like being served well done steak, it is not the texture that I would normally order. It is sprinkled with a mixture of breadcrumbs and herbs to give it flavour and comes with a neat square of dauphinoise potatoes with a crunchy layer on top, a quenelle of crushed minted peas and a rosemary scented jus. A little side of mint sauce adds flavour. 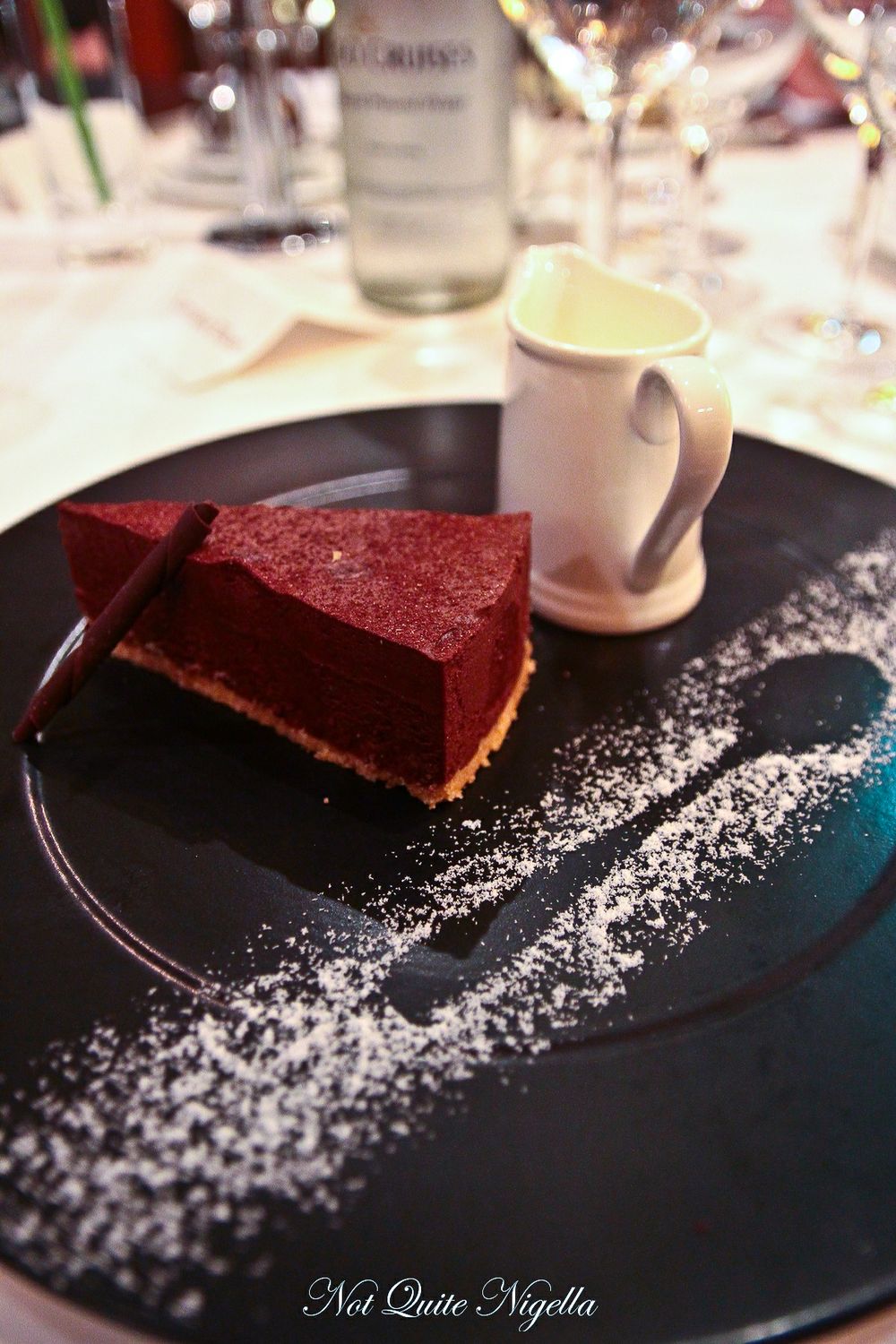 I tossed up between the trifle and the chocolate tart and what swayed me was the bottom layer of the trifle was pure black cherry jam and I'm trying to eat less sugar so I went with the chocolate tart made with Valrhona Manjari chocolate. The texture of this was so light and fluffy and interestingly, it was served just below room temperature while mousse cakes are usually served chilled. It was on a thin layer of joconde sponge and came with a pot of pouring cream.

I'm not sure if I'm still sold on the idea of cruising as the choices offered at Ocean Grill were quite safe reflecting the mindset of the P&O customer which admittedly, is not my demographic. Although if I were on the cruise, I'd imagine I'd dine here most nights if we weren't in port.

So tell me Dear Reader, how do you feel about cruises? Would you like to see more cruise stories here? And do you enjoy buffets? 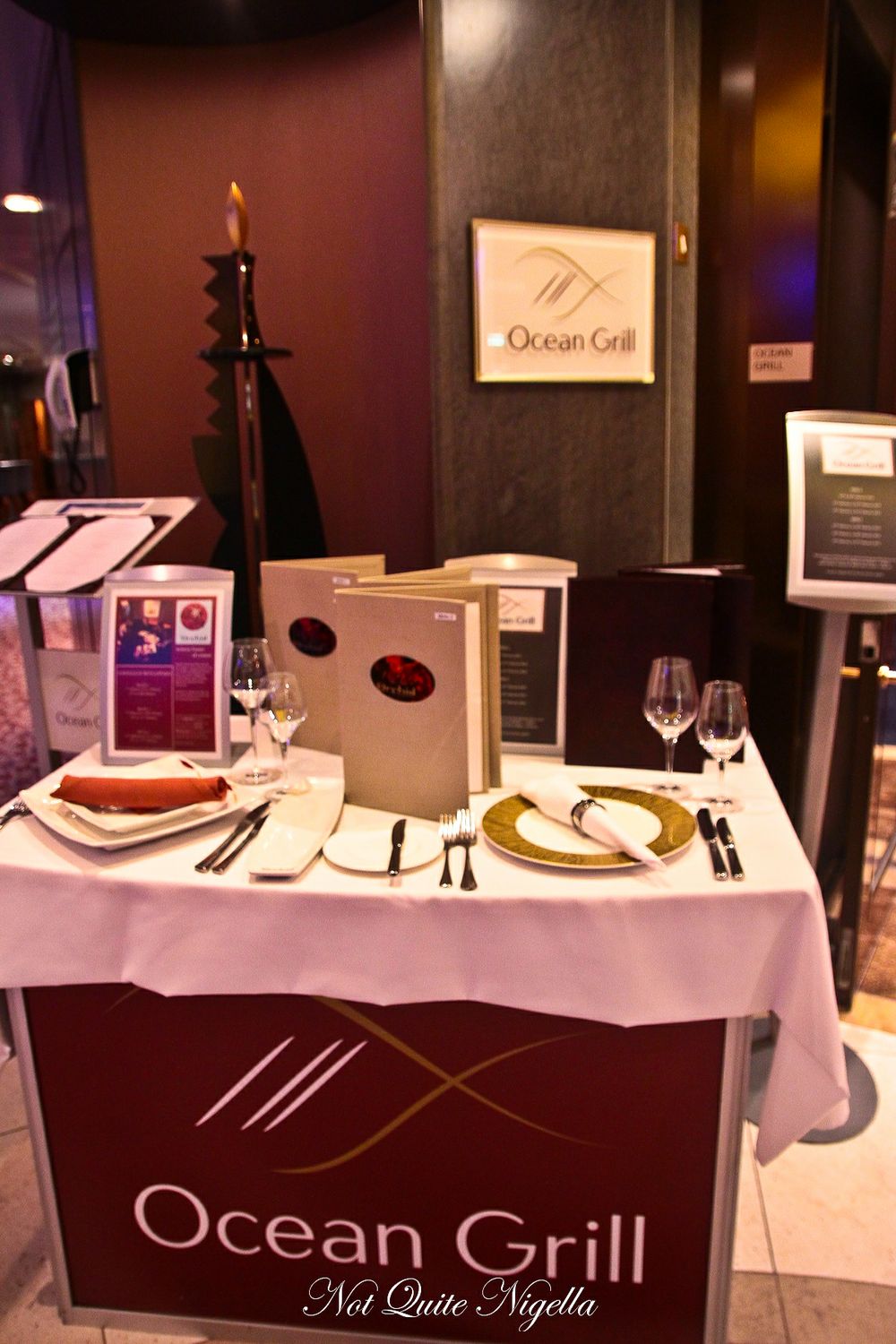 NQN dined at Ocean Grill as guests of P&O

Ocean Grill on The Arcadia