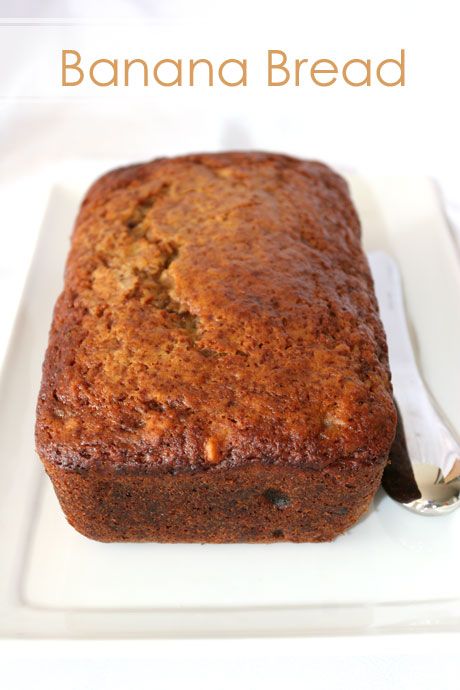 It is true that there are at least 1001 recipes for Banana Bread. It is also true that some of them will claim to be the best ever recipe. Whilst I can't say that I am remotely qualified to be the judge of the best banana bread, I can say that I am somewhat qualified to eat them. So I decided that with a surplus of bananas (in Australia April-June and August-October are the best times to eat them), I'd make four different kinds of Banana Bread. The first one was of course from Nigella, the second a standby good old banana bread recipe I found in a Woolworths Fresh magazine, the third from the Taste website by Janelle Bloom (yes, I know she microwaves everything but this recipe did not involve the microwave and I was persuaded by the coconut flavour in it) and the last one is a Chocolate Banana bread by Karen Martini from the Sunday Life magazine.

I was woken at 7am this morning by a sudden urge to bake. Actually no, it was the birds outside and their loud morning calls that woke me but not knowing what to do with myself, I decided to bake. It was at the urging and from the favorable reviews on Vogue's food forum that I sought to make Nigella's banana bread. I was also influenced by the bananas that were ripening aromatically in my kitchen that were the perfect size for this recipe. The addition of brandy or rum soaked sultanas and walnuts makes this a little fancier and showier than your normal Banana Bread. I call this the Marcia Brady of the Banana Breads. 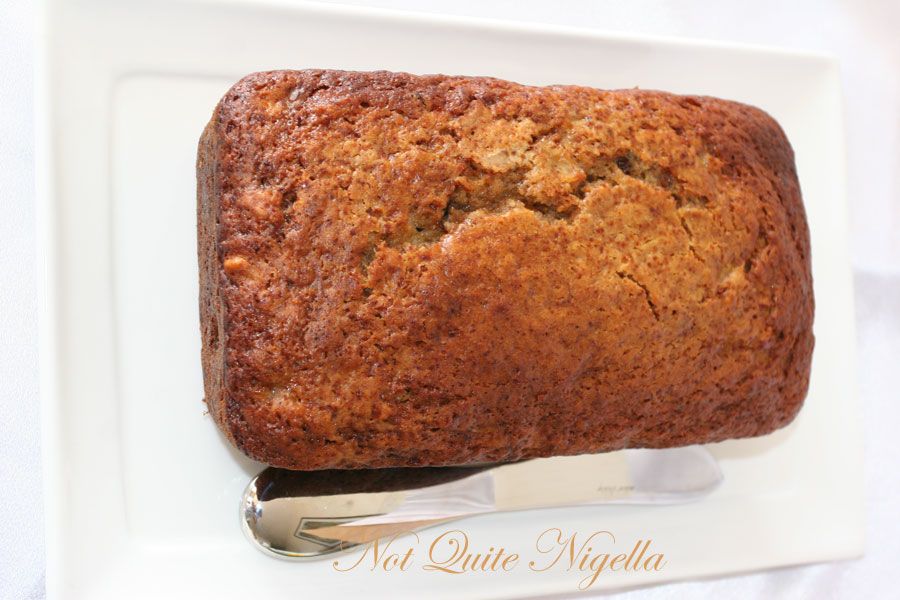 I made this a little rougher textured that I would like in that I didn't chop the walnuts too finely and unlike most baked goods, I found this really came into its own when it was cold, sliced and buttered. When it was straight out of the oven, it just didn't appeal to me as much. 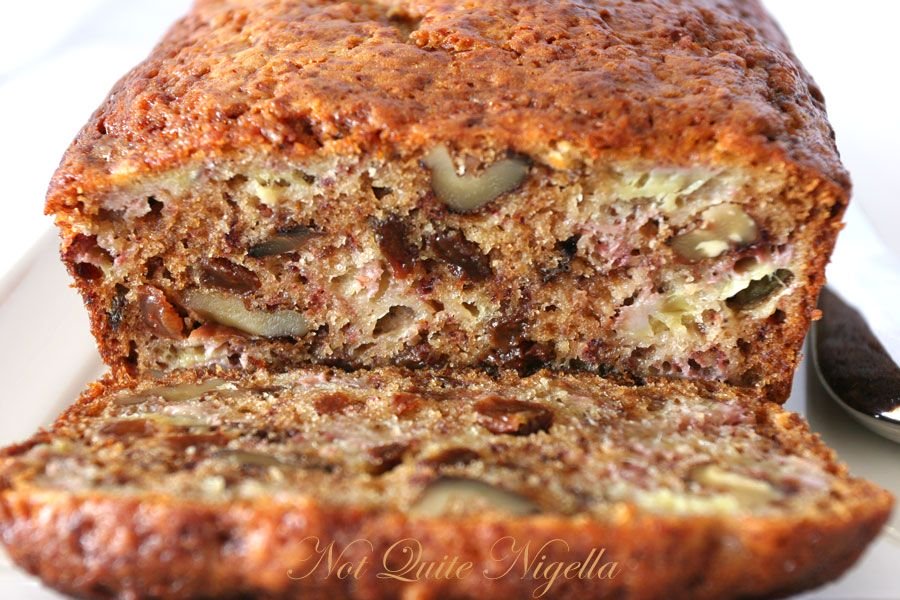 Step 1 - Put the sultanas and rum or bourbon in a smallish saucepan and bring to the boil. Remove from the heat, cover and leave for an hour if you can, or until the sultanas have absorbed most of the liquid, then drain.

Step 2 - Preheat the oven to 170ºC/gas mark 3 and get started on the rest. Put the flour, baking powder, bicarb and salt in a medium-sized bowl and, using your hands or a wooden spoon, combine well. In a large bowl, mix the melted butter and sugar and beat until blended.

Step 3 - Beat in the eggs one at a time, then the mashed bananas. Then, with your wooden spoon, stir in the walnuts, drained sultanas and vanilla extract. Add the flour mixture, a third at a time, stirring well after each bit.

Step 4 - Scrape into the loaf tin and bake in the middle of the oven for 1 to 1 and a quarter hours. When it's ready, an inserted toothpick or fine skewer should come out cleanish. Leave in the tin on a rack to cool, and eat thickly or thinly sliced, as you prefer. 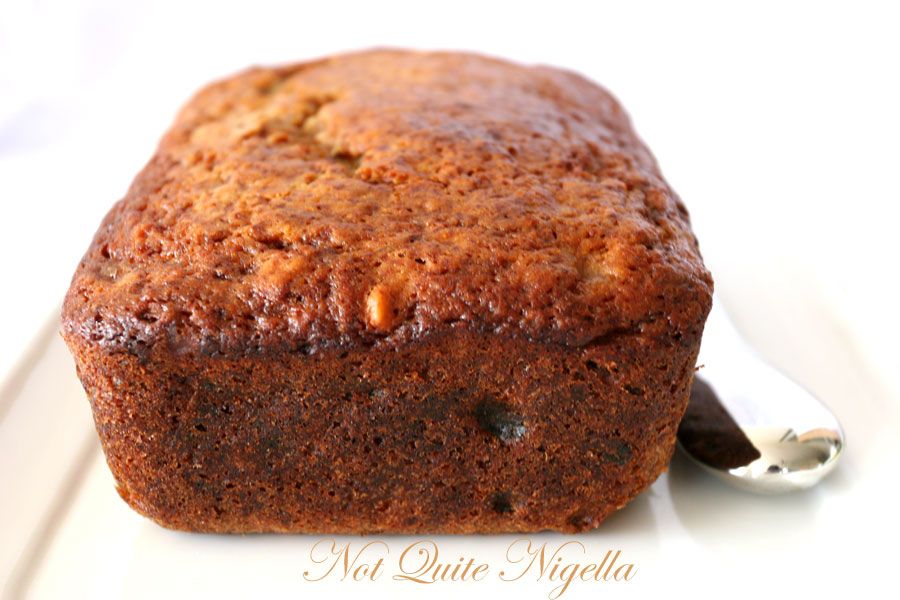 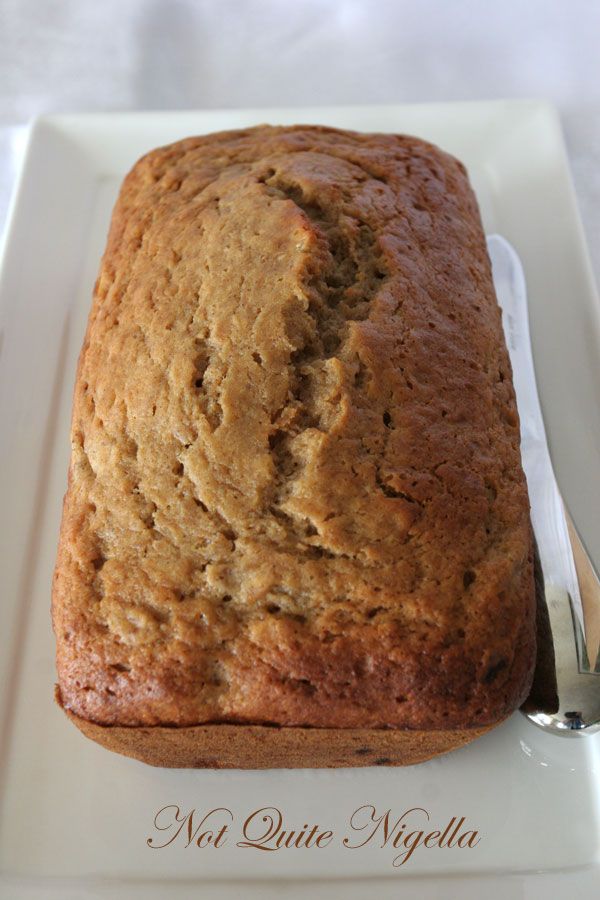 This is more your plain Jane, nothing fancy like walnuts or brandy soused sultanas. I see it more as the Jan Brady of Banana Bread. Nigella's would undoubtedly be Marcia Marcia Marcia. That doesn't mean Jan isn't good but she just isn't as flashy but it also means that she is less work. It's soft and fine grained but less moist. 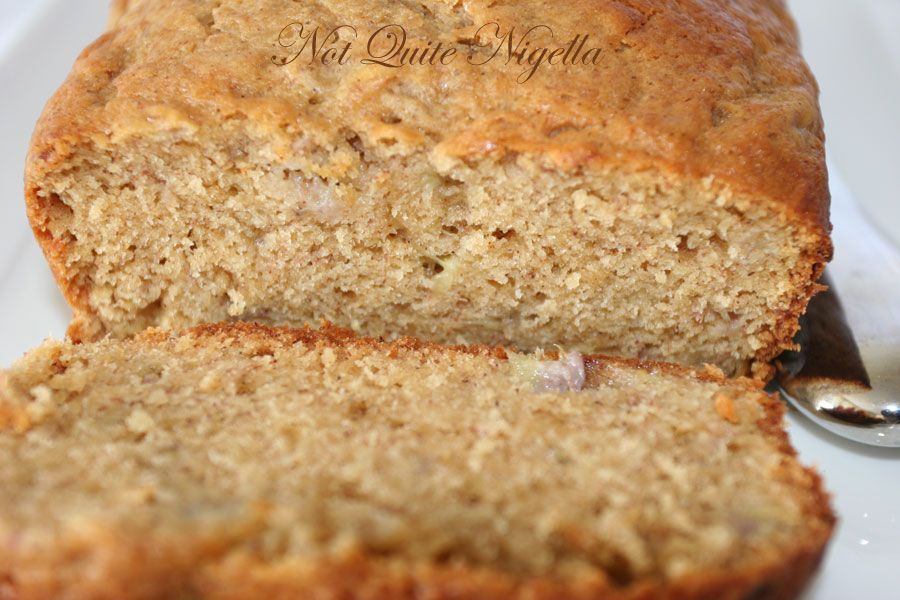 Step 2 - Combine flours, sugar and cinnamon in a large bowl. Whisk butter and eggs together. Stir in banana. Spoon into prepared pan. Smooth the surface.

Step 3 - Bake for 45-50 minutes or until a skewer inserted into the centre comes out clean. Set aside in the pan for 10 minutes before turning out onto a wire rack. Serve spread with butter. 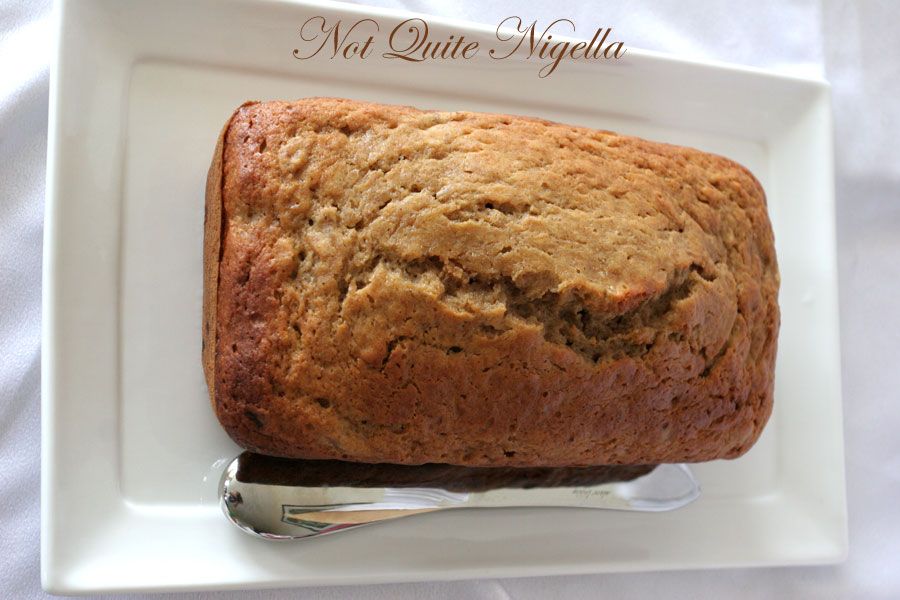 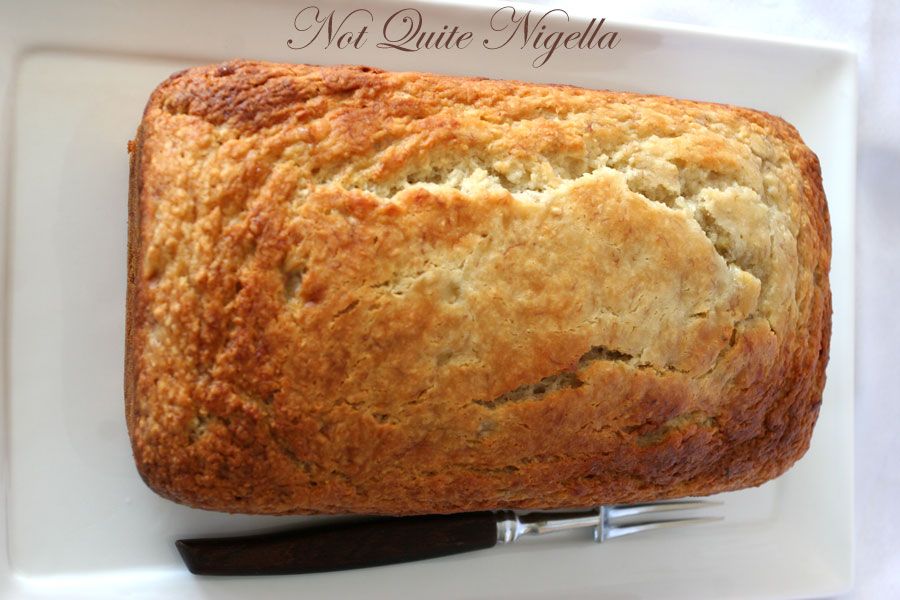 Yes I do know that she is on Ready Steady Cook purporting the merits of Microwaves at every turn but I am willing to overlook this because of the addition of coconut and coconut milk in this Banana bread. This cake is very delicate, moist and light, the lightest of the four and not overly sweet but just sweet enough. Interestingly, there's no butter in the recipe with the moisture and fat content provided by the coconut milk (I used coconut cream) which produces a lovely moistness. I call this the Mrs Brady-the surprise fox among the hens. 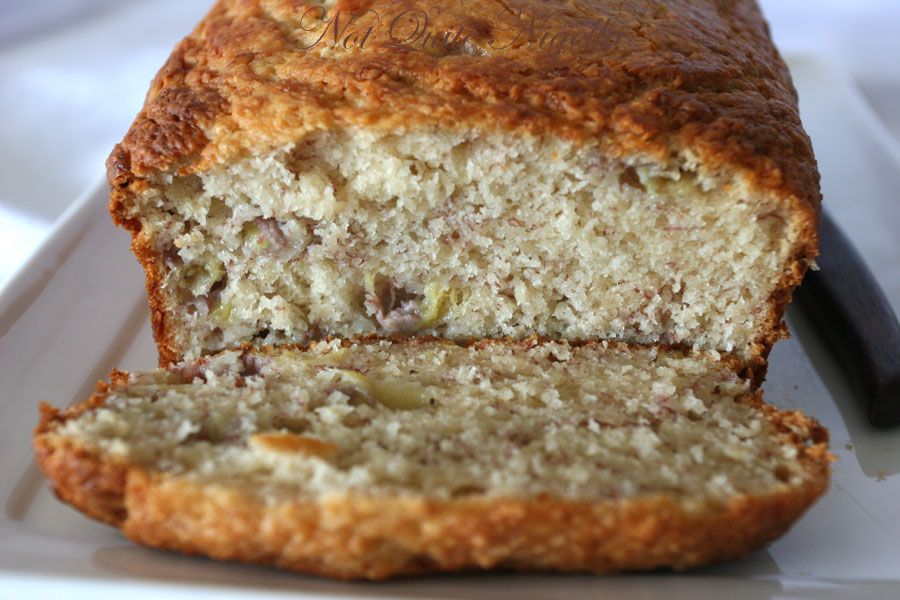 Step 2 - Combine coconut, sugar and flour in a large bowl. Using a fork, beat banana, coconut milk, egg and vanilla in a jug. Pour over flour mixture. Gently stir to combine. Spoon mixture into pan. Bake for 1 hour to 1 hour 10 minutes or until a skewer inserted into centre comes out clean.

Step 3 - Stand for 10 minutes in pan. Turn onto a wire rack to cool completely. Serve sliced or toasted with butter, jam or cream cheese. 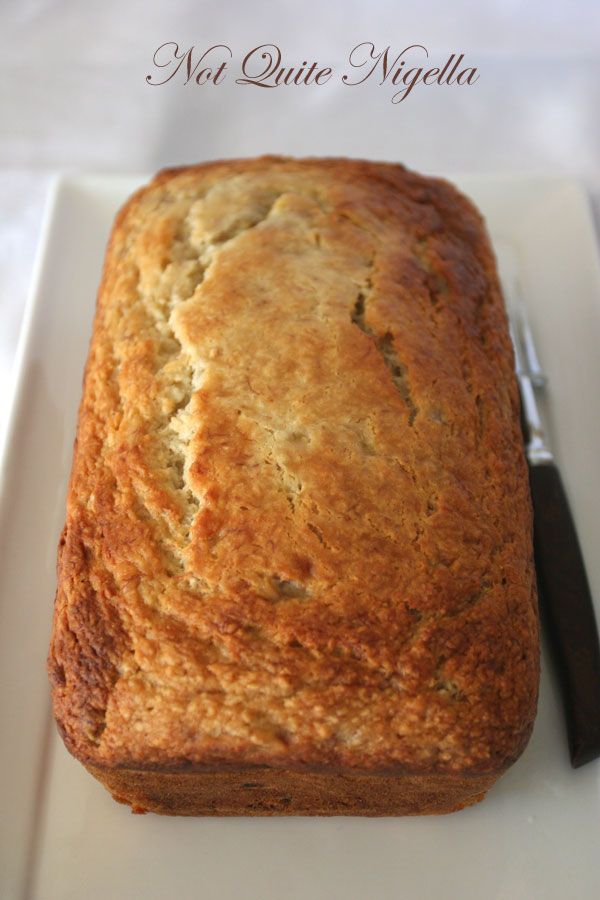 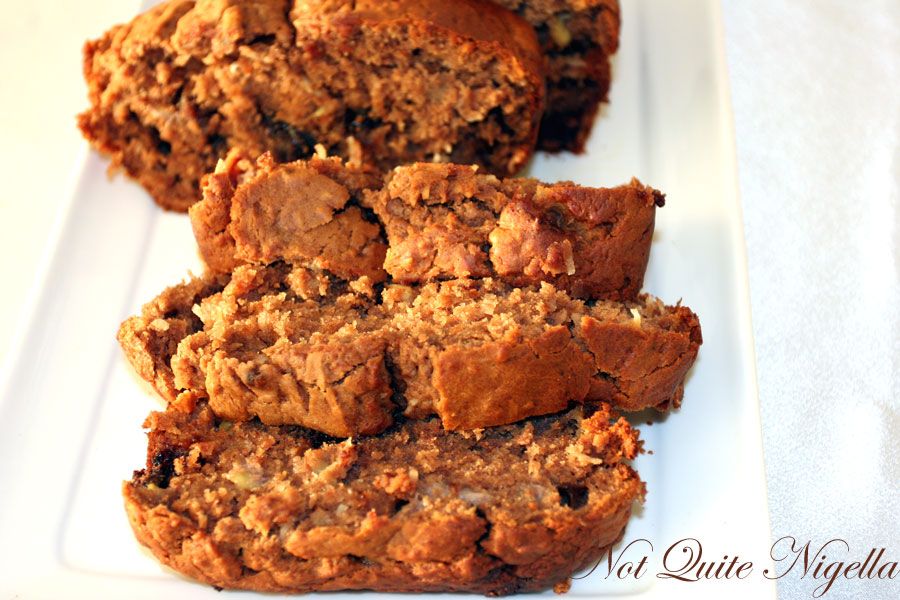 I left the most fiddly one until last. It's not particularly fiddly when you compare it to a normal cake but it does require creaming and thus the aid of the heavy equipment whereas the other banana breads just needed a bit of luxuriated stirring. I am in two minds about Karen Martini's recipes, the ones that I have tried have not been great, but the picture of this one was too tempting to not make. As it turns out, mine did not resemble the one in her picture in the slightest (notwithstanding the fact that I forgot to add the banana on top). Hers was a deep, dark chocolate colour on the outside with a glossy coating on top. Mine was more a very light brown and not glossy. Also when cutting it when warm, it wasn't very dense, I would have liked a note to slice it when it's cold. So I guess it's the last Karen Martini recipe for me at least for a while. I like the little notes that Nigella gives and the fact that things turn out as they look in the pictures. As its the most trouble, and a little bit dense, it just has to be Cindy Brady.

Step 2 - Soft combined flour, cocoa and baking powder into a bowl. Beat butter and sugar with an electric mixer until light and fluffy. Add eggs one at a time, beating well in between. Add mashed banana and stir until combined. Fold in flour mixture, then add coconut and chocolate chips and stir until well combined.

Step 3 - Grease a loaf pan (22x12cms) and line the base with baking paper. Spoon mixture into pan. Slice extra banana and place on top of loaf (arrrgh I forgot the banana on top!). Bake for 65-70 minutes or until cooked when tested with a skewer. 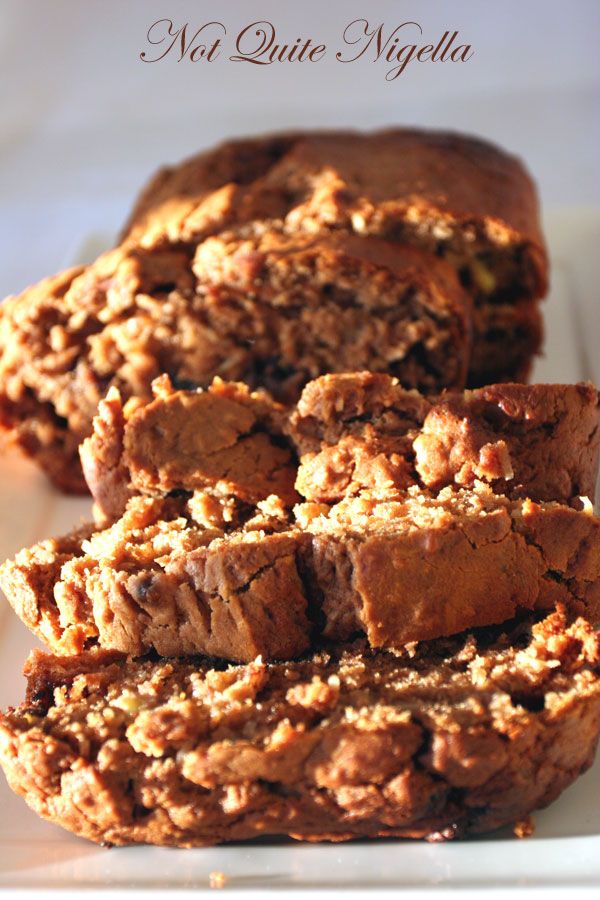 I can say that out of the 4, I most liked Janelle Bloom's Coconut and Banana bread the best followed closely by Nigella's Banana Bread. I wasn't so taken by Karen Martini's Chocolate banana bread as I prefer dessicated to shredded coconut as it's more delicate. As for the plain Jane Jan Brady Woolworth's loaf, that was my least favourite in comparison with the others.

However my husband was an entirely different matter altogether. He liked the Woolworths Fresh magazine one the most, followed by Nigella's, then Karen Martini's Chocolate Banana bread and then Janelle Bloom's Coconut banana bread which he said stuck to the roof of his mouth too much for comfort!

Having said that I don't think that I would chuck any of them out of my bed at night and I found them all, uniformly best served cold with a spread of butter.