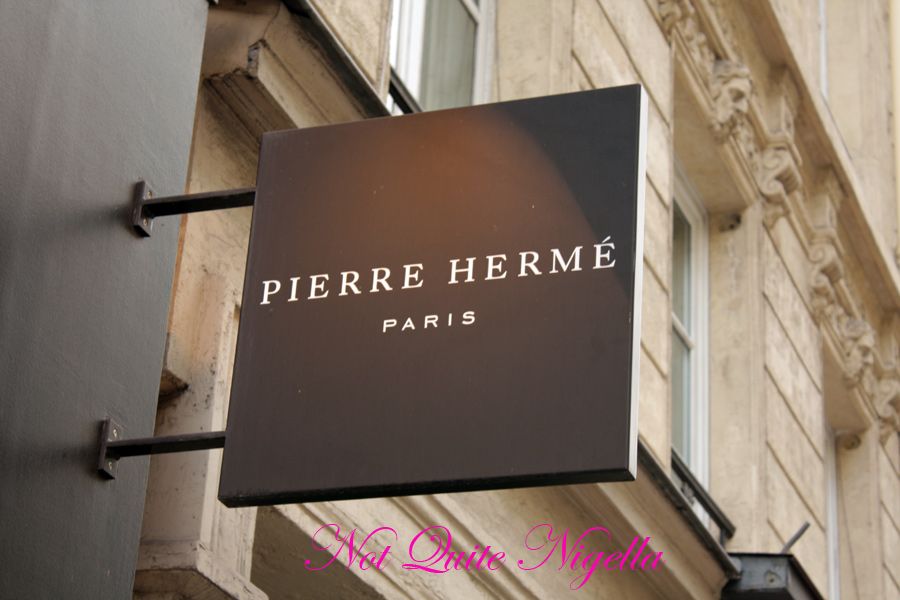 Pierre Hermé needs no introduction to macaron lovers - I've yet to meet a food lover or blogger that doesn't adore these delicate little sweet morsels from heaven. Interestingly, Pierre Hermé Paris stores began in Tokyo, where most things French will receive an appreciative audience. He has been called anything from "the Picasso of pastry " (Vogue), "pastry provocateur" (Food & Wine), "an avant-garde pastry chef and a magician with tastes" (Paris-Match), "kitchen emperor" (New York Times), The King of modern pâtisserie (The Guardian). High praise indeed. So it was with curiousity and excitement that I visited the main store on the Rue de Bonaparte. 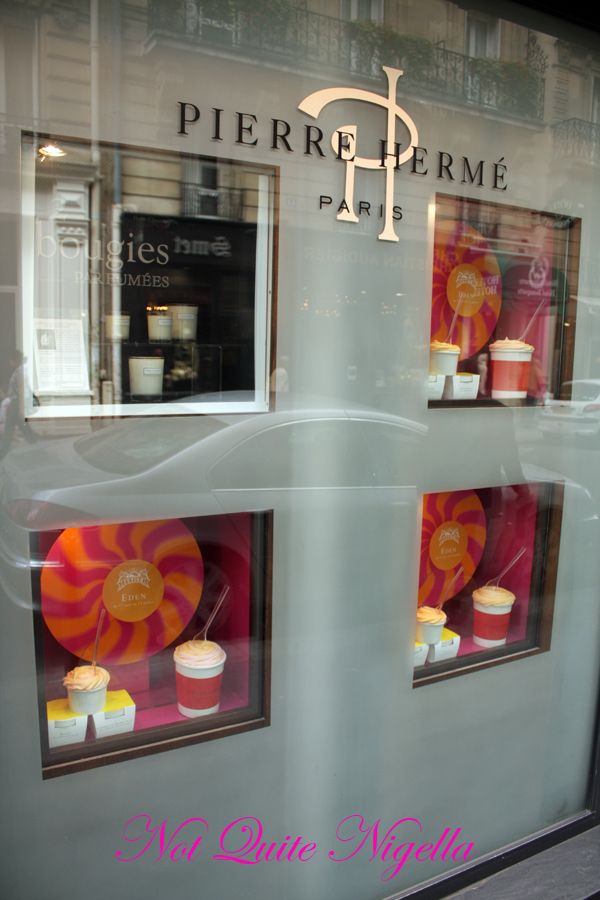 It seems that on the smallest and most inconspicuous of streets in Paris lies a treasure trove of fantastic artists or designers that specialise in food. Case in point, Pierre Hermé's shop is on a smallish street, unannounced when you'd think they would be shouting it from the high rooftops of Paris. The only hint is the minimalist words "Pierre Hermé" and the crowd. And what a crowd it is, it's a tight fit to get into this tiny little store, outfitted like a designer set from Ugly Betty where 5 men in designer black outfits behind the counter take your precious order. It's a little extreme and makes me giggle, especially when I am served by a very serious young man with one of those Kylie Minogue stretch headbands. Even the staff at Louis Vuitton weren't this serious. 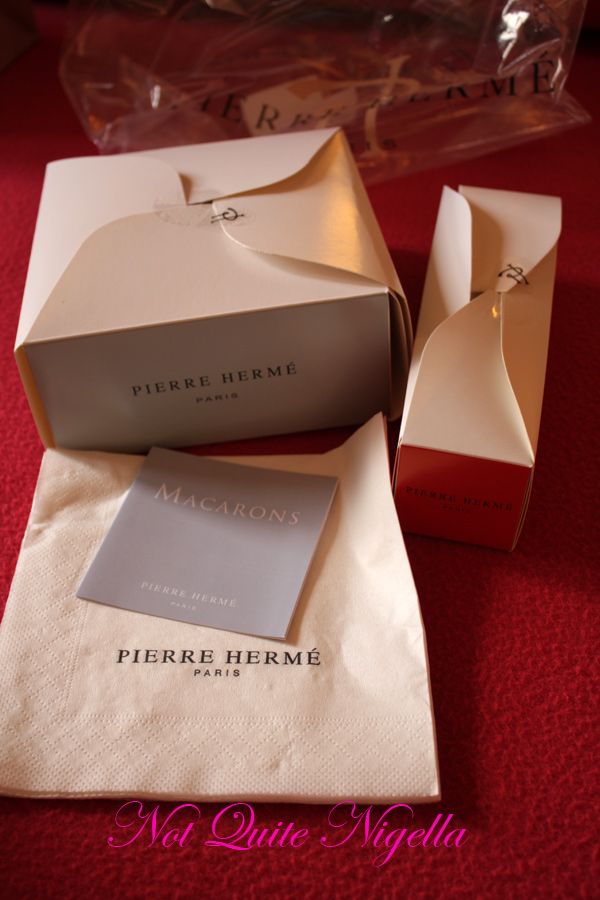 Keeping in mind my splurge at Laduree the other day and for good measure, a parting reminder of it before he exits the crowded shop by my husband, I select comparatively few things. Just a Desire, a 2000 Feuilles and a selection of 7 macarons in a box. I could get them packed in a plastic bag but given that the counter guy has just tried to pick up three with his tongs only to have them crumble right in front of me, I ask for the box. It's extra of course like all nice boxes here in Paris (grrr). I feel proud that I've only chosen a few things and my total is only 22.88. 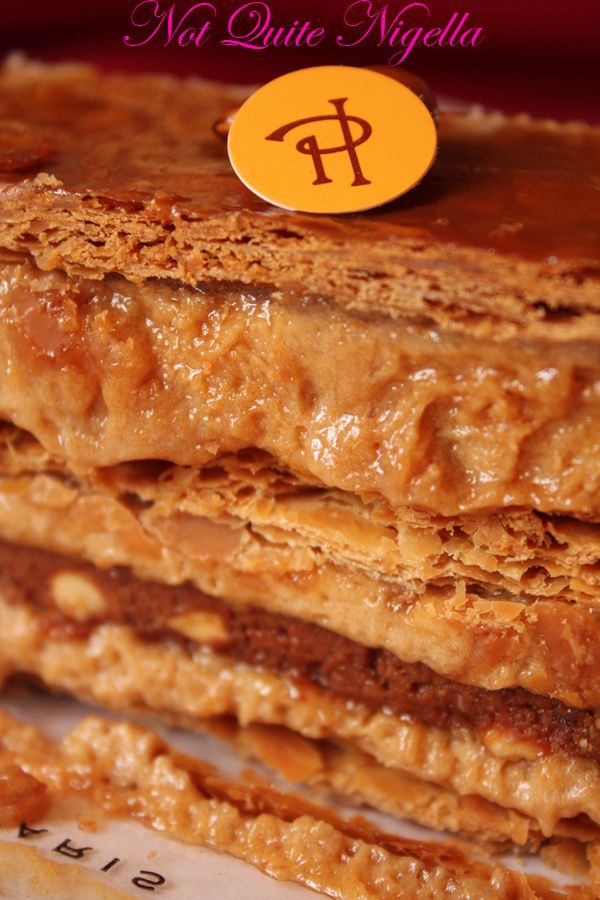 We don't have long to go home and once we do I take them out of their boxes. As the weather was a warm 25 degrees today we have to act quickly, the 2000 Feuilles is on the verge of melting. In fact just seconds after the photos were taken, it collapsed. It doesn't stop me from sticking my fork into it and plundering its many layers. It's absolutely gorgeous, the pastry perfectly crispy despite the custard layers (how do they do this in Paris? Everywhere else it goes soggy) and the cream is a rich caramel cream with a chocolate crunch at the bottom. The bottom layer is brushed on the base with butter and sugar. The textures on this pastry are incredible and should you ever come face to face with this pastry, open your mouth and take a bite-I dare you to stop at just one forkful. 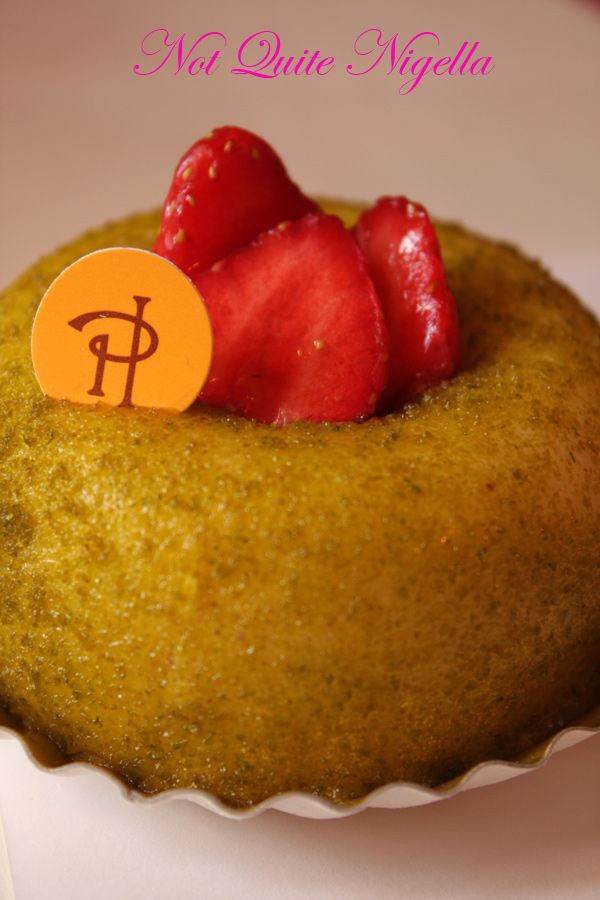 The Desire, a fitting name is a sponge filled with cream and raspberry jelly, a lovely light concoction but I have the feeling I should have chosen a more exotic offering. 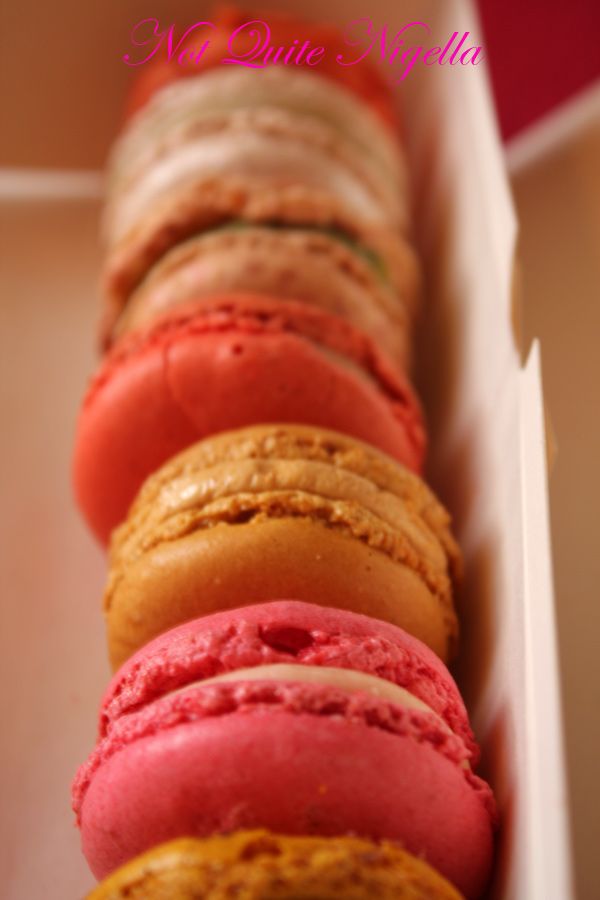 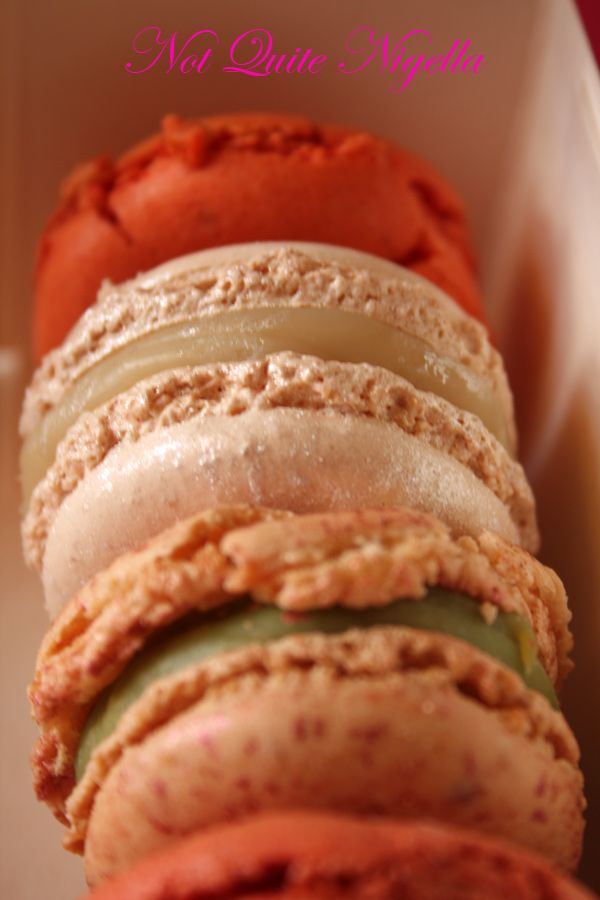 Close up with focus on the Jasmin silver dusted macaron

The macarons are what made him famous so the flavours I tried were: Eden (Peach, saffron and apricot), Jasmin, Rose, caramel a la Fleur de Sel, Mosaic (Pistachio, cinnamon and griottines aka french morello cherries), grapefruit, Mogador (chocolate and passionfruit). The Eden with apricot is my definite favourite, it is so definitely apricot-ey followed by the delicate Jasmine and Mogador (chocolate and passionfruit). The trends for these gorgeous little things are edible metallic dusts, seen most distinctly on the Jasmin macaron. 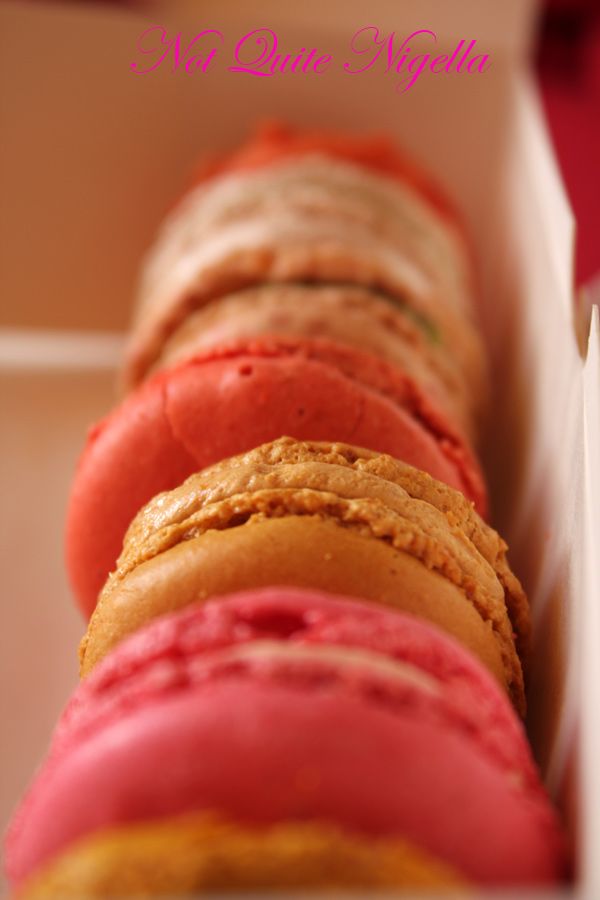 I hate to be one of those people who always has a suggestion or always harks back to something "back home" but in Tokyo, one isn't charged for getting something in a lovely box, and this box is also functional in that it preserves your goodies perfectly so that they can be consumed with both visual and palatable pleasure. There's nothing worse than reaching home and finding that your food has been smashed to smithereens. It upsets me in fact, that I've paid a premium for something that looks perfect only to eat something that looks like it's through the spin dryer. Another thing that they will also do in Tokyo, if you've got a long trip home, is put in a packet of dry ice which would have helped save the 2000 Feuilles should I have wanted to bring them to someone else's house for dinner. 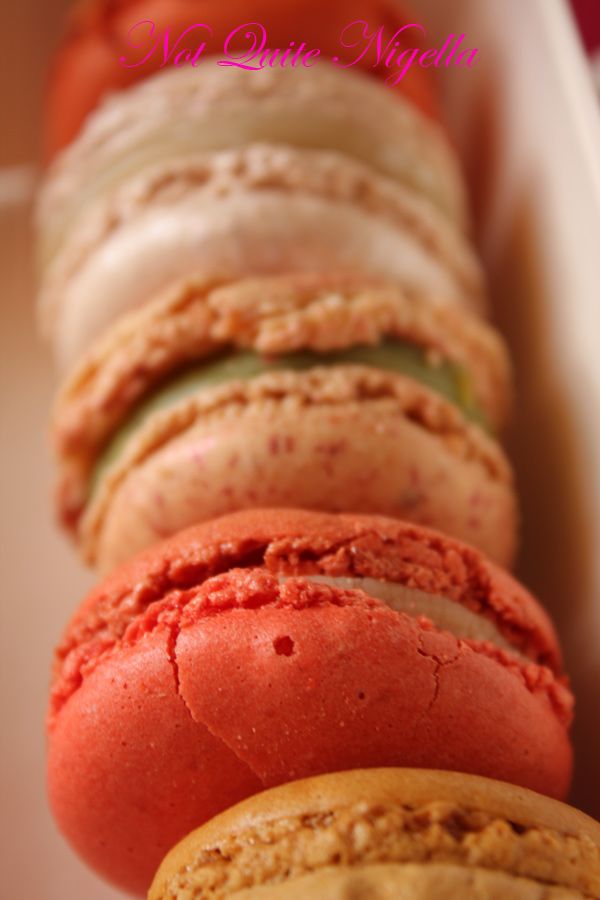 In any case, my husband, my very own Louis XIV, the man whose mantra is "quantity over quality" finds himself enraptured by the macarons. When someone brings up Pierre Hermé, he startles awake and says in a very impressed tone "that Pierre guy, he makes really good biscuits". 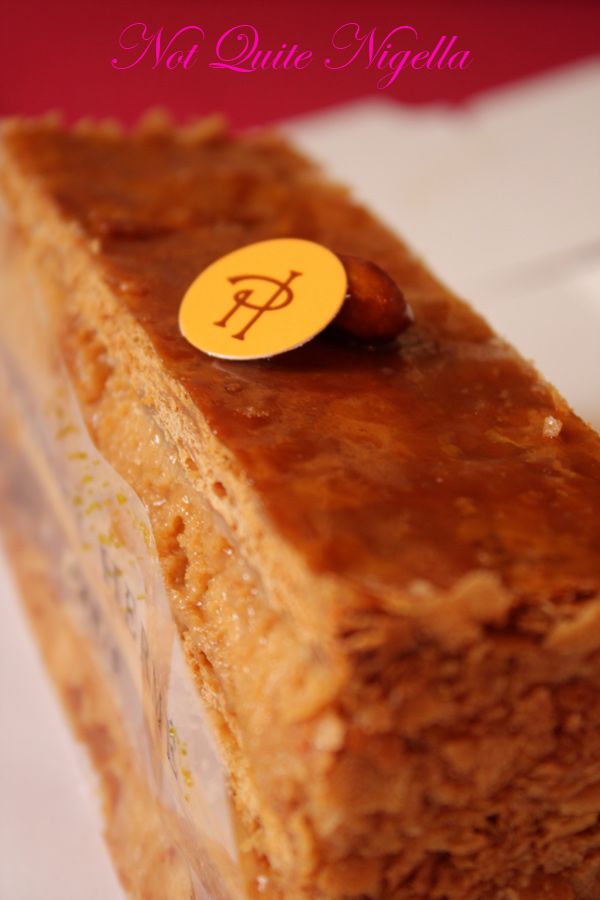