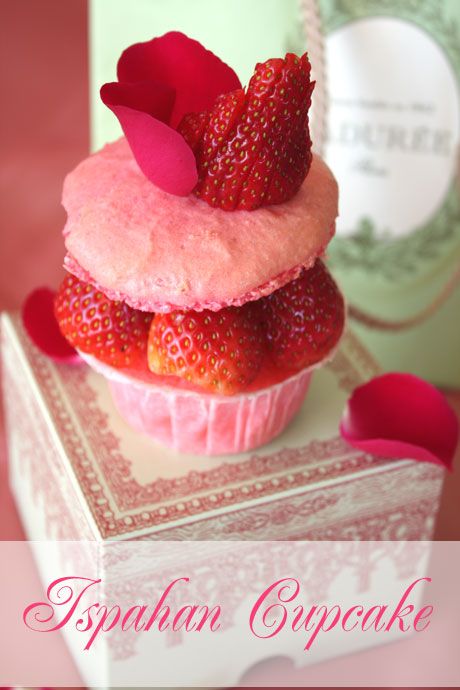 Like an abused pet that is shown signs of kindness, I approached macaron making again with a little nervousness and trepidation. I'd had a semi successful attempt with a Nigella recipe after a few terrible attempts with a Martha one so I was given a little encouragement. Not enough to make me cocky, far from it in fact. But enough to make me give the recipes a shy, sidelong look every now and again and even think to myself "that would be wonderful in a macaron" (although I'd never say that out loud, that would err on the cocky side, or at least confident side, which I am not on). 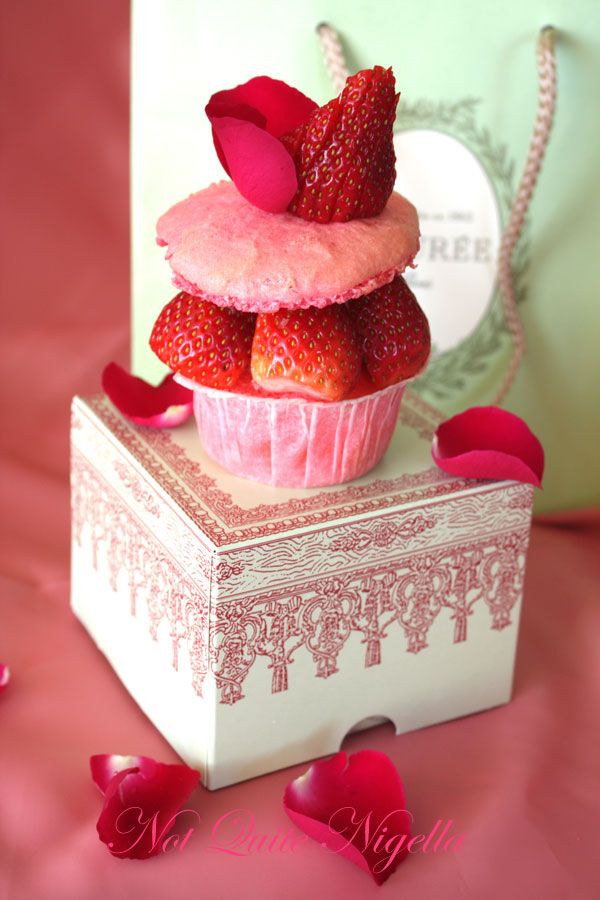 I even stocked up on supplies to make them, purchasing a 1kg bag of almond meal. This meant that I was either thinking of making multiple batches of macarons or making friands. As I don't have a friand tin, all evidence points to the former. So urban-cavewoman style, I brought home my big bag of almond meal like a fresh kill and set it down on the counter proudly, like I had picked the almonds and ground them myself. 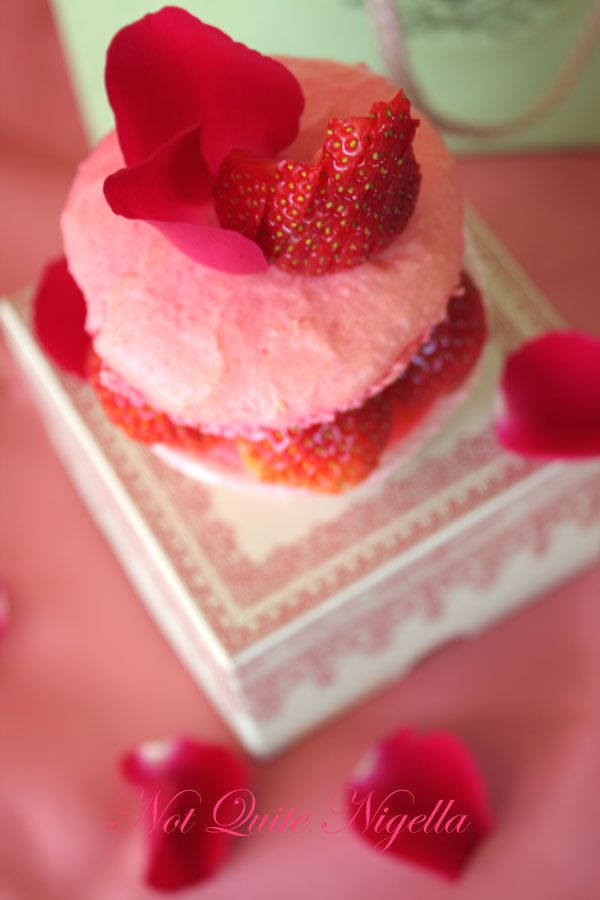 This is a fiddly cupcake, I'll make no bones about it. You need to make the macaron to top it and then make the cupcake base and the rose cream and slice up berries and lychees to fill it and top with a rose petal. But the overall effect is quite spectacular. I made the macaron top first as I knew that if I wasn't successful at that, then I wouldn't bother making the rest. You see, I'm still slightly scarred by my failed attempts. I also chose this cupcake recipe as it sometimes gives a macaron crust on the top of the cupcake, I say sometimes, when I make this as sometimes it doesn't work out that way. Cakelaw found that she got the macaron crust on top here but I didn't get it for this particular lot of cupcakes. Must be something to do with science...

I suspect that Pierre Herme, the creator of the Ispahan would be quite horrified at the idea of his lauded creation being turned into something as cute and kitsch as a cupcake, indeed I saw not a single cupcake in all of my travels in Paris. However it's not exactly like an Ispahan in that the base is a strawberry rose cupcake and the filling is buttercream and not a buttercream and custard creme anglaise combination (I only have so much patience). Also being Mid Winter in Sydney meant that only strawberries and some blueberries make an appearance so I had to improvise and use strawberries rather than raspberries. 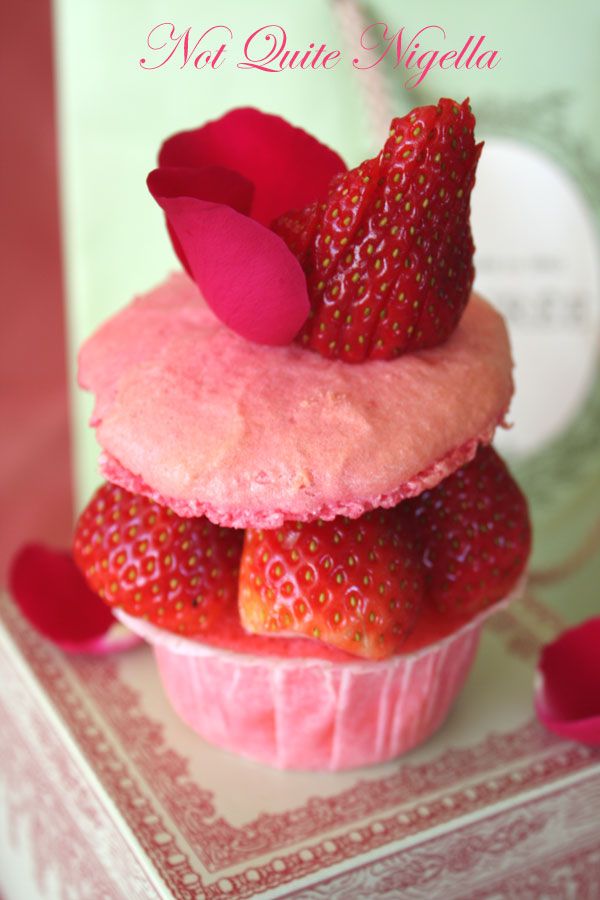 I hope you will find these a fitting homage to the Ispahan, the taste of these are ambrosial and well worth the effort.

Instructions for the Macarons

Step 1 - Mix the almond meal thoroughly with the icing sugar. Whisk the egg whites until fairly stiff, but not dry, sprinkle the sugar over and add the flavouring (a few drops of each, they're strong!) and colourings (gently) and whisk until very stiff. Fold the whites into the almond-sugar dust, and combine gently.

Step 2 - Pipe spiral rounds onto your lined baking sheet, using a plain 1 cm nozzle. Let them sit for at least 10 minutes to form a skin. Preheat the oven to 180°C/Gas mark 4 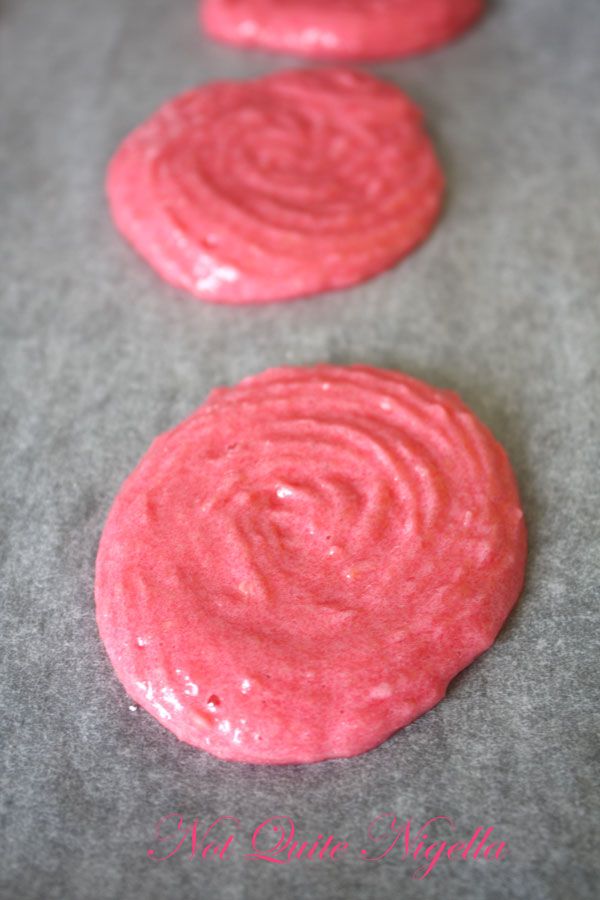 Step 3 - Rap the baking sheet hard on the countertop to flatten the batter before baking, then put in the oven and cook for 10-12 minutes: they should be set, but not dried out.

Step 4 - Remove from the oven and let cool, still on their sheets

Step 3 - Transfer mixture to large bowl; cool 15 minutes and then add colouring to get a vivid pink shade. Whisk in sifted flours, then egg. Divide mixture among cases.

Step 4 - Bake for 30 minutes and they came out perfectly. Cool in tin for 5 minutes, then turn cakes onto wire rack to cool. 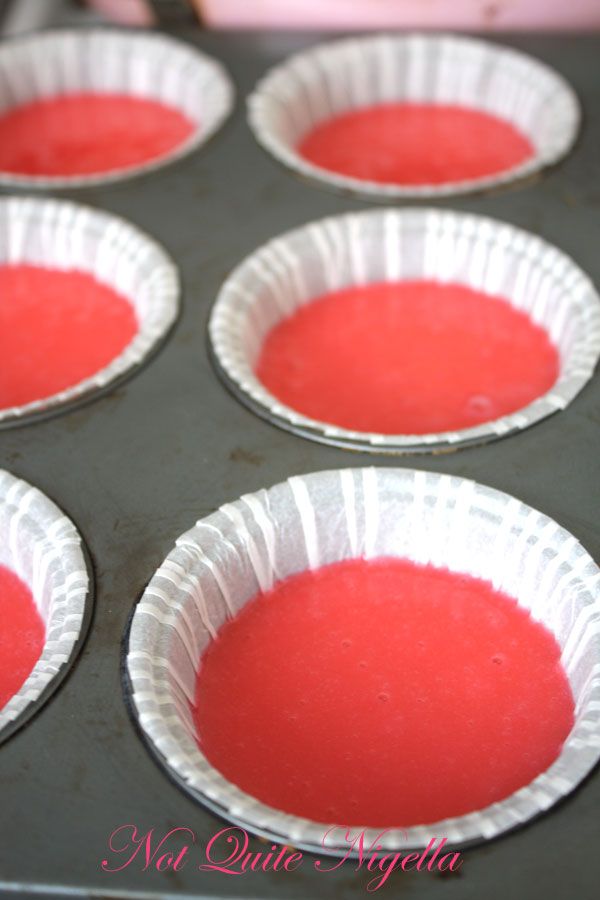 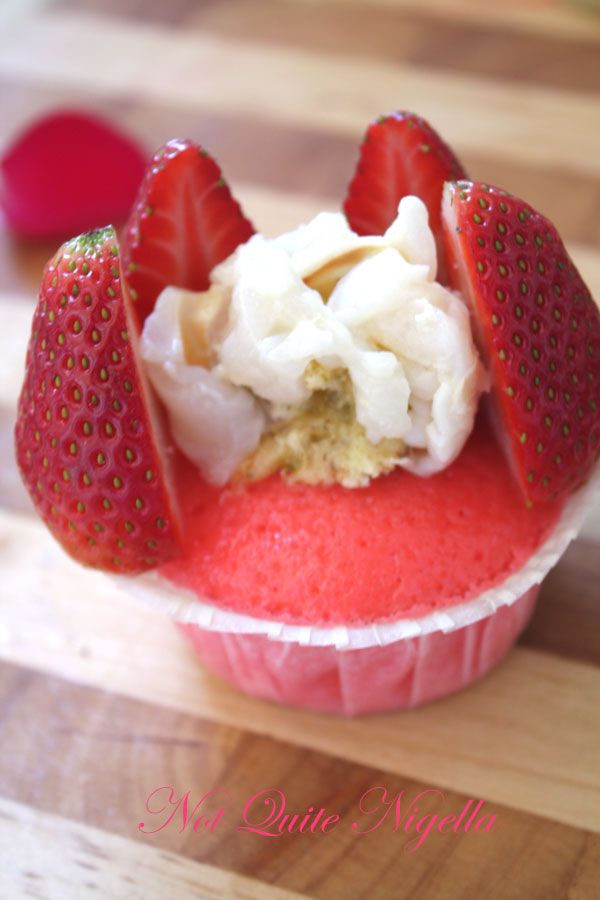 To assemble Ispahan cupcake, remove greenery from washed and dried strawberries and cut in half. Place 4 halves around the edges straight up and then add 1/2 tablespoon of buttercream and top with lychees. Then add last strawberry half and gently push the strawberries forward so that they resemble a dome (see below). Do not let any lychee juice touch the macaron, it will begin to dissolve it. Like the Wicked Witch of the West, macarons are sensitive to water. 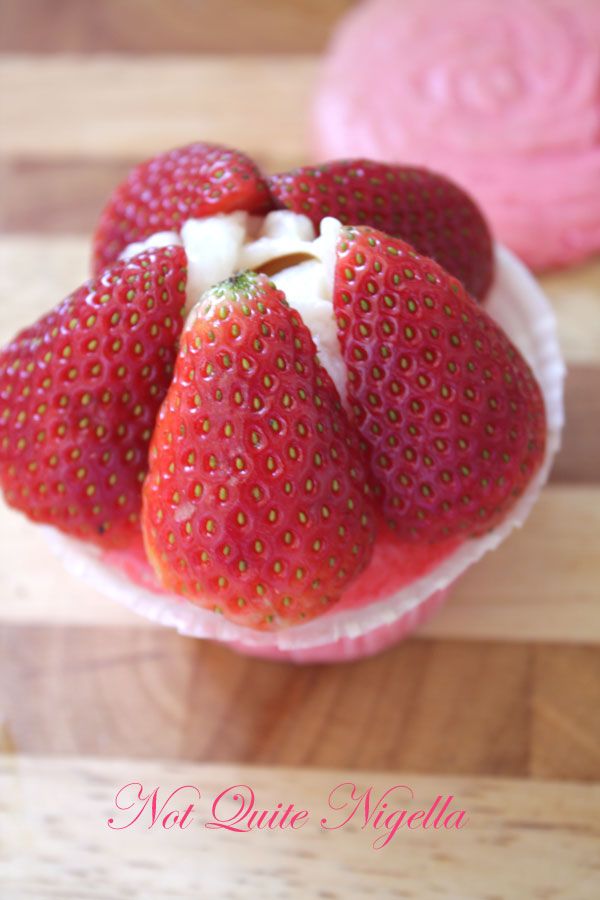 Add macaron and then slice strawberry half and fan and place on top of it. Then add rose petals and voila! 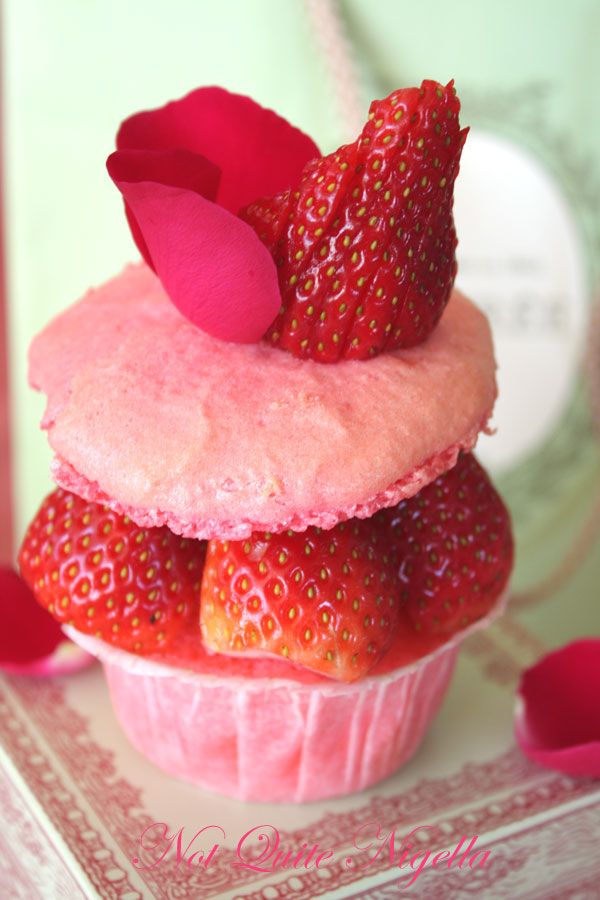 This cupcake is also my entry into Couture Cupcakes' Best Evah cupcake recipe event. Why would I say these are the best ever? Well they feature macarons, which is always a winner and the combination of fruit, buttercream, cupcake and sweet macaron was perfect, so perfect I found myself eating 3 in one go!

This is also my entry into the Sugar High Friday event hosted by Foodbeam! :)