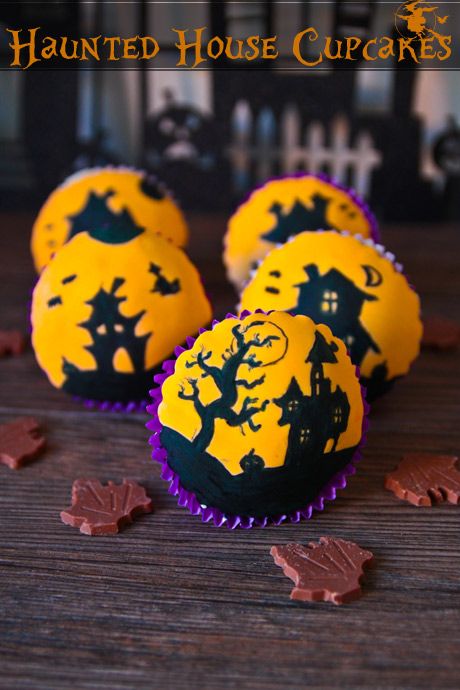 When I was a child, every day on the way from primary school I would stop off at the library. It was on the way home and I loved to pop in and make oogly eyes at the albino axolotl in the tank and borrow some books. I do like a book series-there is something comforting about seeing the same characters doing different things and I suppose that is why I enjoy television series so much more than I do movies at the moment many of which seem like either variations of popular movies, sequels or remakes.

When I was in primary school my favourite series about Dorrie the Little Witch by Patricia Coombs (that is before Sweet Valley High took over!). Dorrie was living the life that my small self wanted to have. She had her own transport (a broom) a cat called Gink and a whole lot more adventures than I experienced.  She met goblins and ghosts and lived in a witch's haunted mansion with her mother and "cook" ... and how much did I want a live in cook to cook for me! 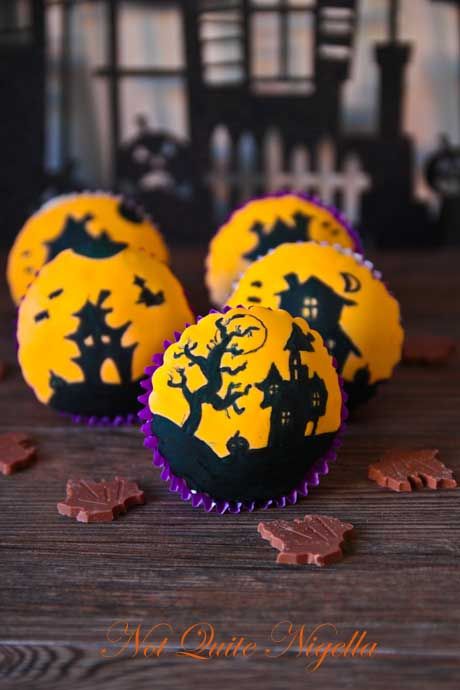 Sadly nothing much has changed. I still yearn to live in a haunted house, have an albino axolotl and have a cook cooking me up anything I might desire. In reality it is _I _who is the cook and I have my own mode of transport, a car rather than a broom and although I came very close to getting an albino axolotl I never did worrying that I travelled too much to look after it. But once a year I get to decorate our apartment to resemble a haunted house. So I thought what better way to decorate a cupcake than with a silhouette of a haunted house?

The idea of a silhouette cupcake came from Zilly Rosen's Zombie Cupcakes book. Rather than using their design of a zombie rising (I gave it a go and realised quite quickly my limitations with drawing) I thought that perhaps a house might be easier-after all the more wonky and lopsided you make it the better and I could certainly do that! 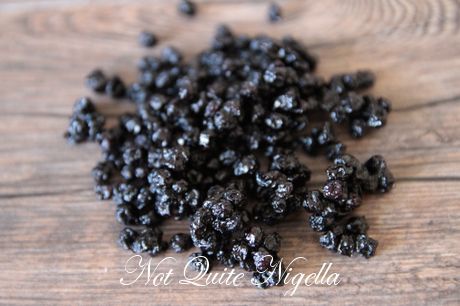 These cupcakes are made using a dried blueberry muffin type  of base that is very quick to put together and gives a nice rise to it. Why dried blueberries? To resemble mould of course! :)  The best part about these cupcakes is that they are easy to do, a bit of sketching an outline and some brush strokes and you are done with the decorations. There's no elaborate 3D shaping, magical trickery or bribing the fondant fairy involved. To style these, I wanted some autumn leaves to finish off the spooky scene but of course it is spring here so there are none to be found. But the lovely Faye Cahill had sent me some leaf shaped chocolates for Christmas and these completed the adornment of the haunted houses.

So tell me Dear Reader, what series of books did you or do you currently like? I'm liking the Sookie Stackhouse series. And do you prefer movies or television? 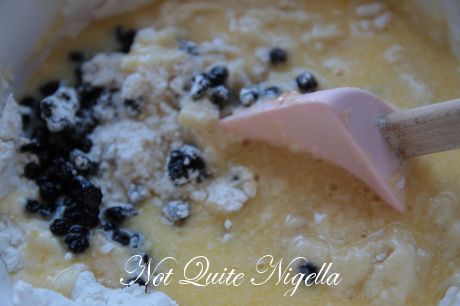 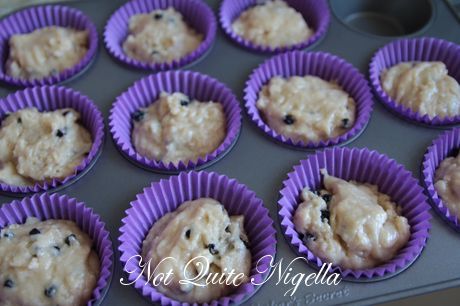 Scooped into cupcake liners-it only made 11! 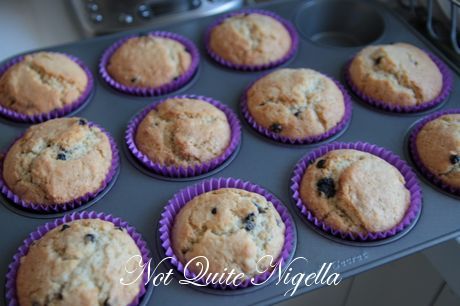 Step 1 - Preheat oven to 180C/350F and line a tray with liners. Mix the flour, baking powder and sugar in a bowl. In a jug mix the milk, butter, blueberries and eggs and whisk together. Then add these wet ingredients into the dry ingredients and stir until just combined. Scoop into the prepared liners and bake for 25-30 minutes until a skewer inserted inside comes out clean. Allow to cool. 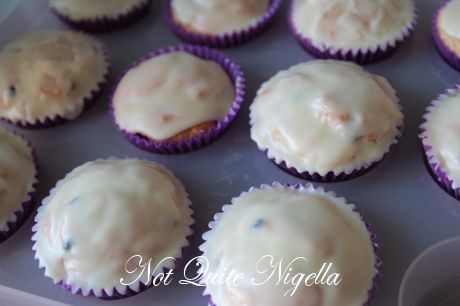 Step 2 - Make ganache. Combine chocolate and cream in a small heatproof bowl; stir with metal spoon over pan of simmering water until melted and smooth. Cool in fridge for about 30 minutes until it reaches a spreading consistency and spread over cupcakes. Allow to set for about 10 minutes and then using a small palette knife dipped in a cup of cold water, tap the knife a little and then smooth over the ganache. This is to provide a smooth surface on which to place the coloured fondant.

Step 3 - To decorate, roll out the yellow orange coloured fondant and cut into circles large enough to cover the entire top of the cupcake to the edge of the paper (to keep the cake part covered and fresh). Adhere the fondant to the cupcake using a little water. Smooth it over with a rectangle of overhead plastic sheet and allow to set for as long as possible (fresh fondant is hard to draw on as it is very soft). 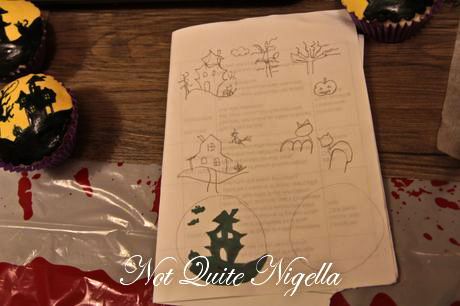 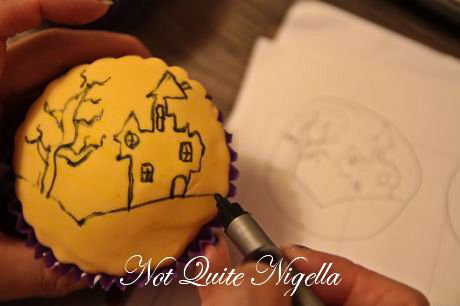 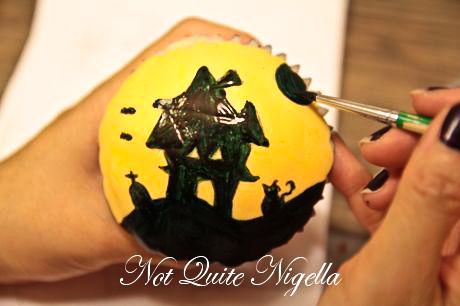 Step 4 - Now the best thing is to practice drawing haunted house silhouettes on paper first. Trust me, I free handed it once and it looked terrible. Once you have your designs ready trace them into the fondant with the edible pen and then fill them in with the black edible colouring and a small paintbrush. Draw bats, full or crescent moons, tombstones, cats, pumpkins and trees along with your houses! 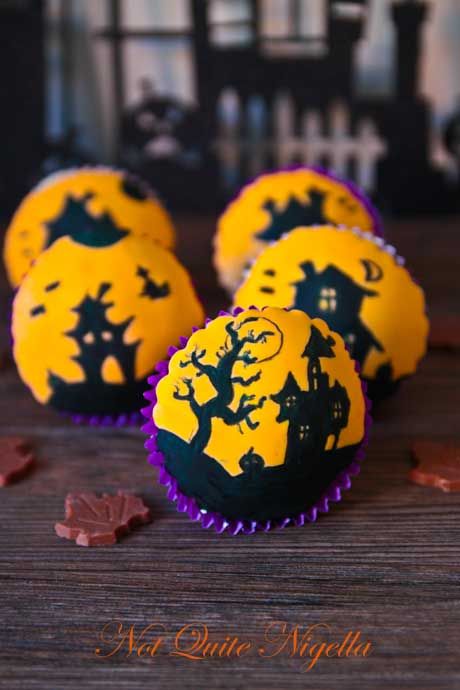