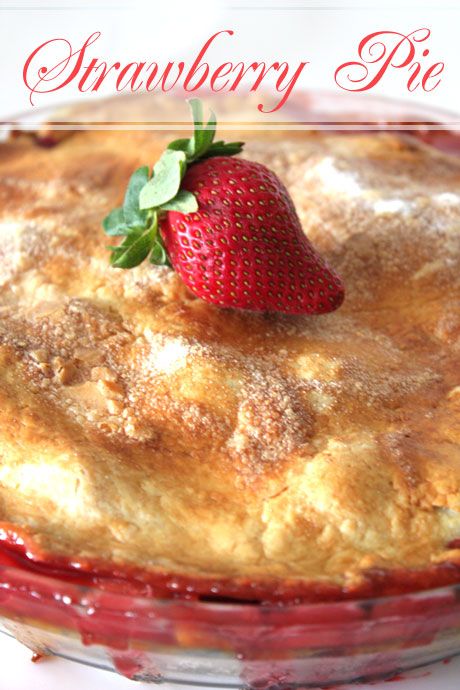 I saw Cindy Crawford making this pie on Oprah three times (yes they run rerun after rerun of Oprah here) and it wasn't until I saw it for a third time that I thought I'd give this a go. I am naturally suspicious of a Supermodel dishing up cooking advice - someone who used to get paid to not eat telling us what to eat seems somewhat ludicrous but I liked the idea of a strawberry pie. One thing that I thought was hilarious was that her hotel and bar entrepreneur husband apparently wouldn't eat something if he knew it had rhubarb in it. Snails maybe but harmless rhubarb? Truly odd. 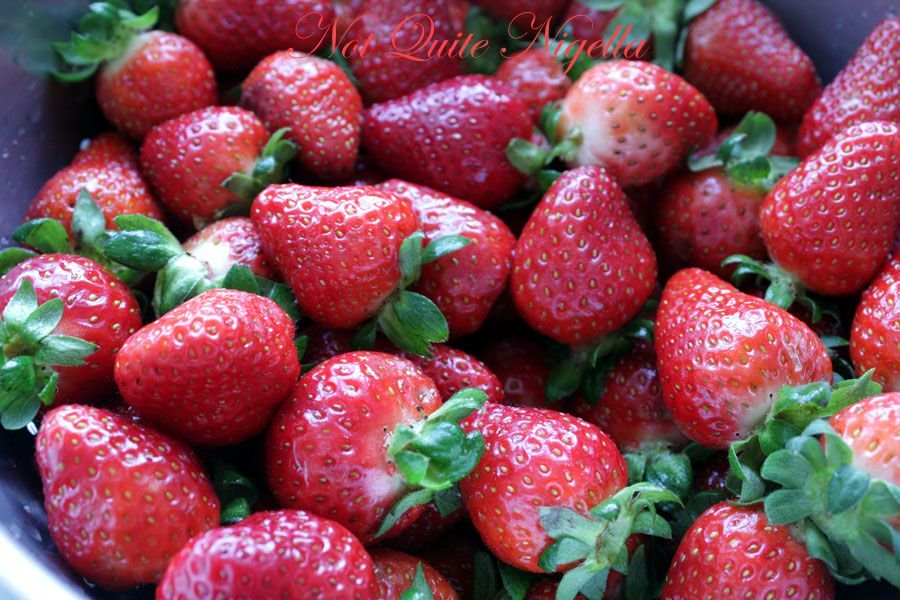 Of course when it's done on TV it sounds breezily easy and it's not especially hard, especially as you are making your own pastry, but it does take time to roll out the pastry which I found somewhat resistant to all of my rolling pin manipulations. It's a good opportunity to get out any frustrations though and picturing someone loathed under your rolling pin will make the time rolling more satisfying. Once the pastry is done, washing and slicing the strawberries takes a bit of time unless of course you've got those giant hulking GM strawberries the size of a child's fist. Cindy made hers with rhubarb but I stuck to just strawberries as the rhubarb I saw at the shops this week was in woeful condition at a criminally high price. 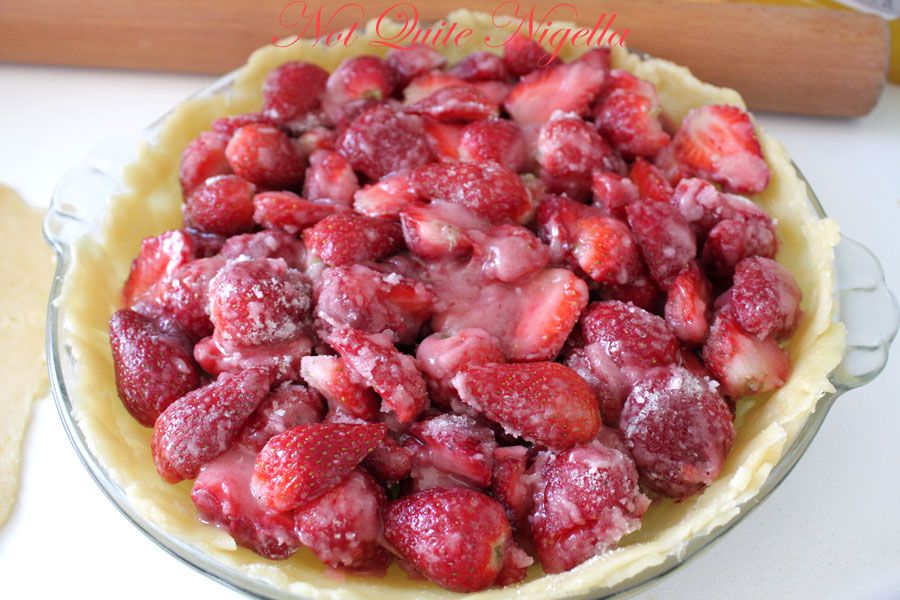 My friend Nic made this a few days before me at the risk of hearing some of her husband's jokes about "dreaming of Cindy Crawford's Pie" and both of us forgot the step of adding the cubed butter which doesn't really matter in the long run. She made the strawberry and rhubarb version which she declared really, really delicious. 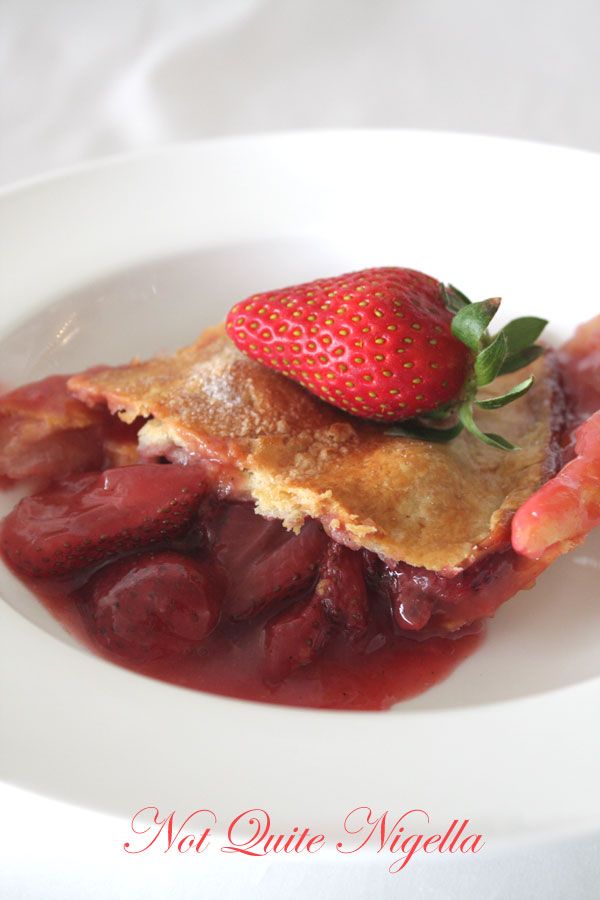 If you're eating it warm from the oven, one word of warning: it is by no means one of those "solid packed" pies, the filling is quite runny and wet as you can see from the picture. Perhaps the addition of cornflour would help thicken it and keep the filling together. The crust however is quite good and as far as pie crusts go as it's low maintenance (no rolling then putting the the fridge for an hour or blind baking) but tastes as good as, or better than, a regular sweet pie crust. The top is a little crunchy whilst the bottom is sturdy and delicious and does well to soak up the juices without going entirely soggy.

This recipe was originally from Saveur magazine

Step 1 - To make crust, preheat oven to 400°F/200°C. Mix flour and salt. Measure oil and milk together but don't stir them together. Add to flour and combine and once combined, divide the dough into two, one slightly bigger round that the other. Roll out crust on greaseproof paper with a rolling pin and place the slightly bigger rolled out round in the base. Set aside the other rolled out round for the top.

Step 2 - To make filling combine sugar, flour, nutmeg and cinnamon. Add fruit, stirring to coat. You can do this step ahead of time and set it aside in fridge and drain it later. If you're adding blueberry or peach, do add lemon zest. 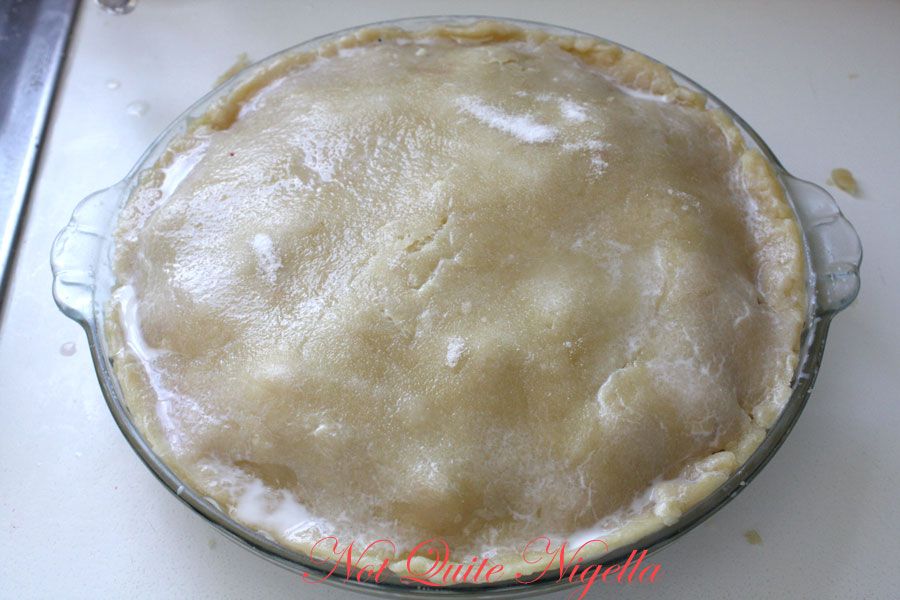 Step 3 - Fill crust with filling. Scatter butter (and try not to forget this like my friend Nic and I did). Add top pastry round and pinch edges and seal the pastry and ventilate the top by cutting a hole in the top. Brush with milk and sprinkle extra sugar on top. Bake on a cookie sheet for 50 minutes. If you find the edges are cooking too fast, cover them with tinfoil.

Allow to cool 1 hour before serving if you can resist. 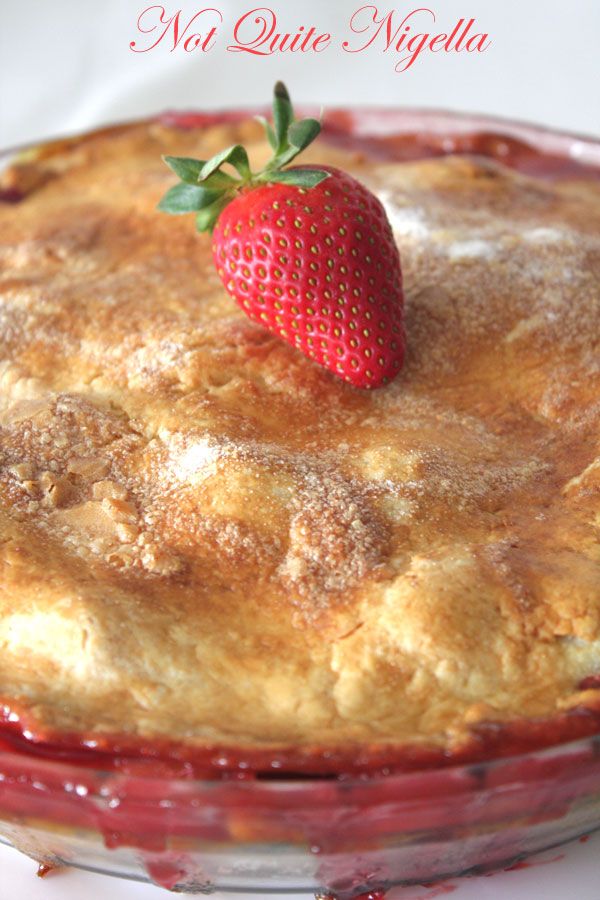