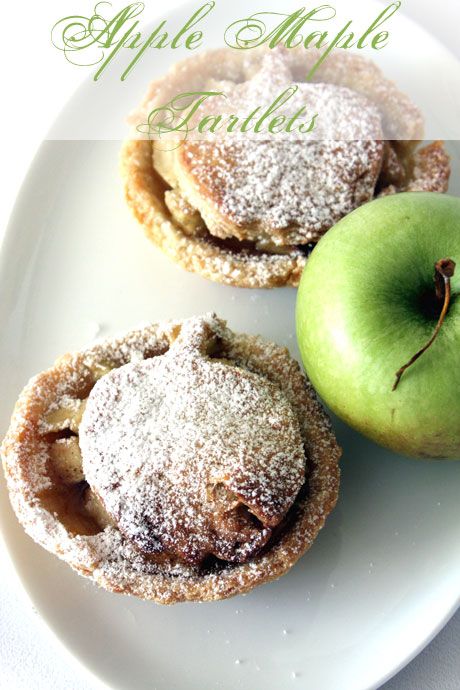 You'll have to forgive the way these look. I tried to do something cutesy to it using an Apple shaped pastry cutter for the top but I think something got lost in the translation and they didn't quite look as Apple-y as I would have liked. Were you here in my kitchen I could've stifled any snickering with one of these pies and that would have silenced any criticism. This recipe below uses the Cindy Crawford Saveur magazine pie crust adapted a little and the filling was a mix of thing that I thought would go well with apple, nothing earth shattering there with the usual suspects: nutmeg, cinnamon and maple syrup. 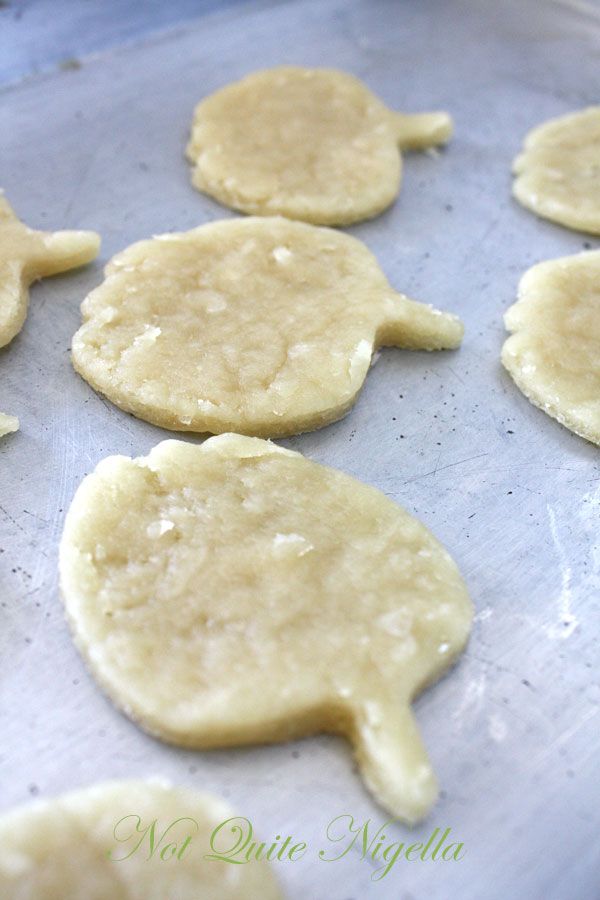 I made these to take on a picnic, and they were a resounding hit. Even my husband who eschews pastry was smitten with these. The apple filling has a nice, thick consistency (unlike the runny Strawberry pie) and the pie crust is divinely crumbly and delicious with an almost shortbready crumble to it. Of course you could make one large pie using the same amount of crust but you may want to use more apples and you don't need to cut them as small. They do shrink down to about 1/2 the uncooked volume so keep that in mind. And don't forget the vent the top. If you prefer your pie filling runnier, you could reduce the amount of cornflour, as it was my husband described the texture as like the apple in a McDonald's Apple Pie at which I was first horrified to hear but upon reflection agreed, and Apple Pies are one of the things that I will eat there. 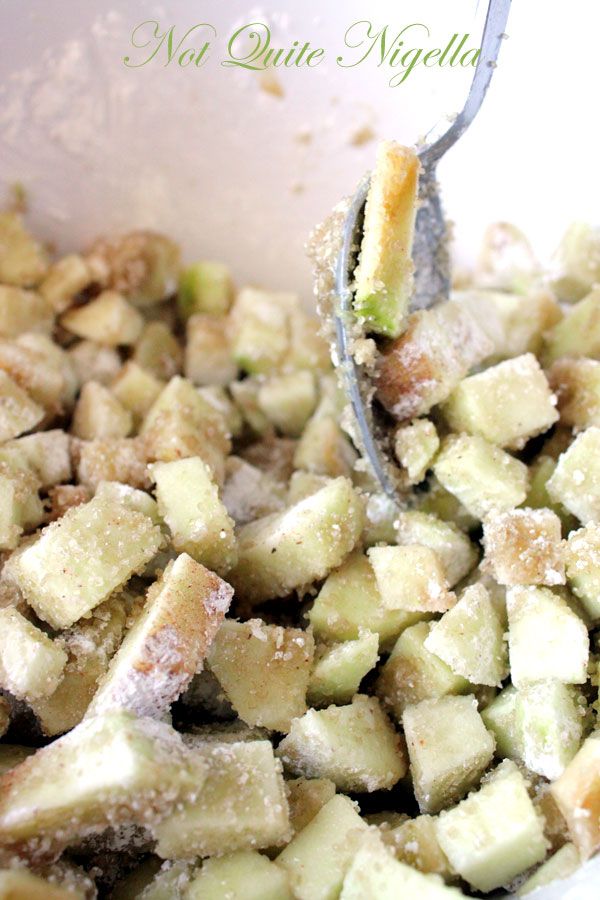 You could serve these as they are for a picnic or with some whipped maple cream (combine 1/2 cup of whipped cream with 2 tablespoons of maple syrup) for afternoon tea. Whatever you do, try one shortly after it's been out of the oven, once it has cooled a little. It's absolutely delicious then and that's when the pastry is at its best.

I've added some changes in brackets to a couple of the ingredients in order to make it vegan friendly as this is my entry for Libby's The Allergic Kid Thanks for "Nothing" Thanksgiving Roundup! :)

Step 1 - Mix flour, salt and sugar. Measure oil and milk together but dont stir together. Pour the milk and oil into flour until combined and resembling a pastry. If it doesn't come together add a little more milk. 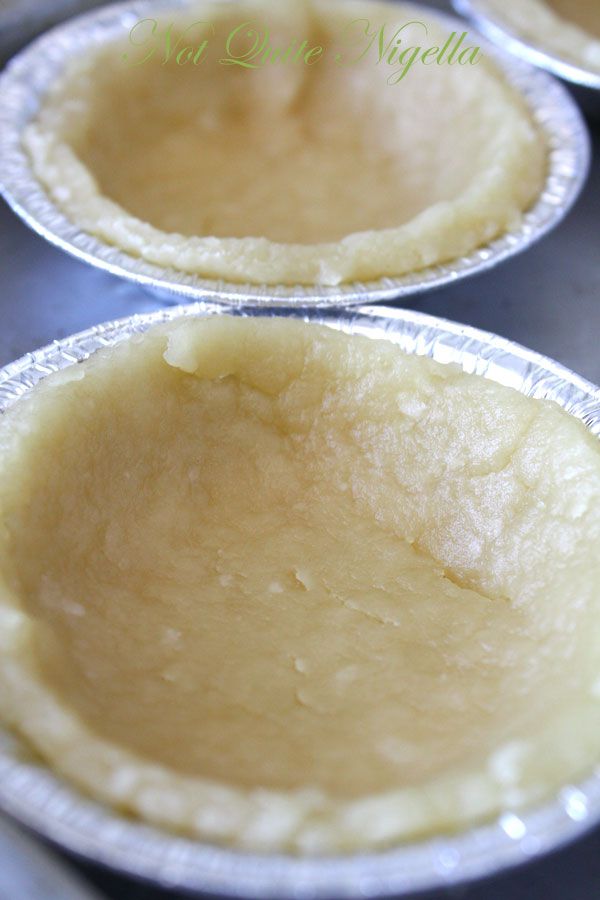 Step 2 - Roll out pastry on greaseproof paper with a rolling pin (it will be hard to roll as small bits flake off, the greaseproof paper is the best thing to combat this) and cut out 10 circles and 10 apple shapes to top them with. Place pastry in freezer while you get the filling together. I prefer to do this than cut the apples beforehand and use lemon but that's just a personal preference, if you cut the apples beforehand and add lemon juice, just put them straight into the pie shells.

Step 3 - Mix all of the filling ingredients except for the butter together until combined well. Spoon into pie shells and dot with the butter cubes. Place apple shaped pastry cut outs on top and brush with milk and bake in 200c oven for 15 minutes. Cool for 15 minutes and dust with icing sugar if desired. Serve with cream or ice cream. 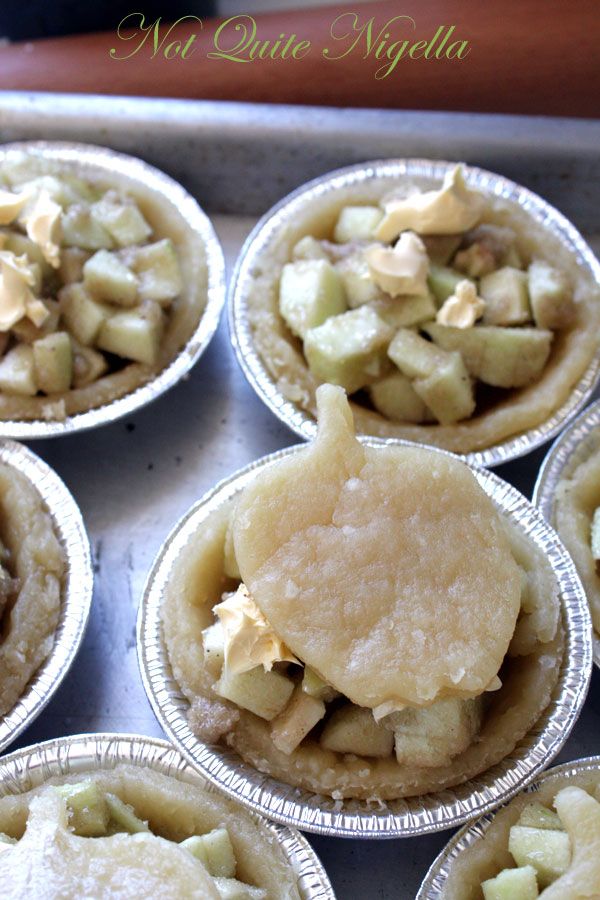