The Most Magical Apple Flower Tarts & Cook With Me! 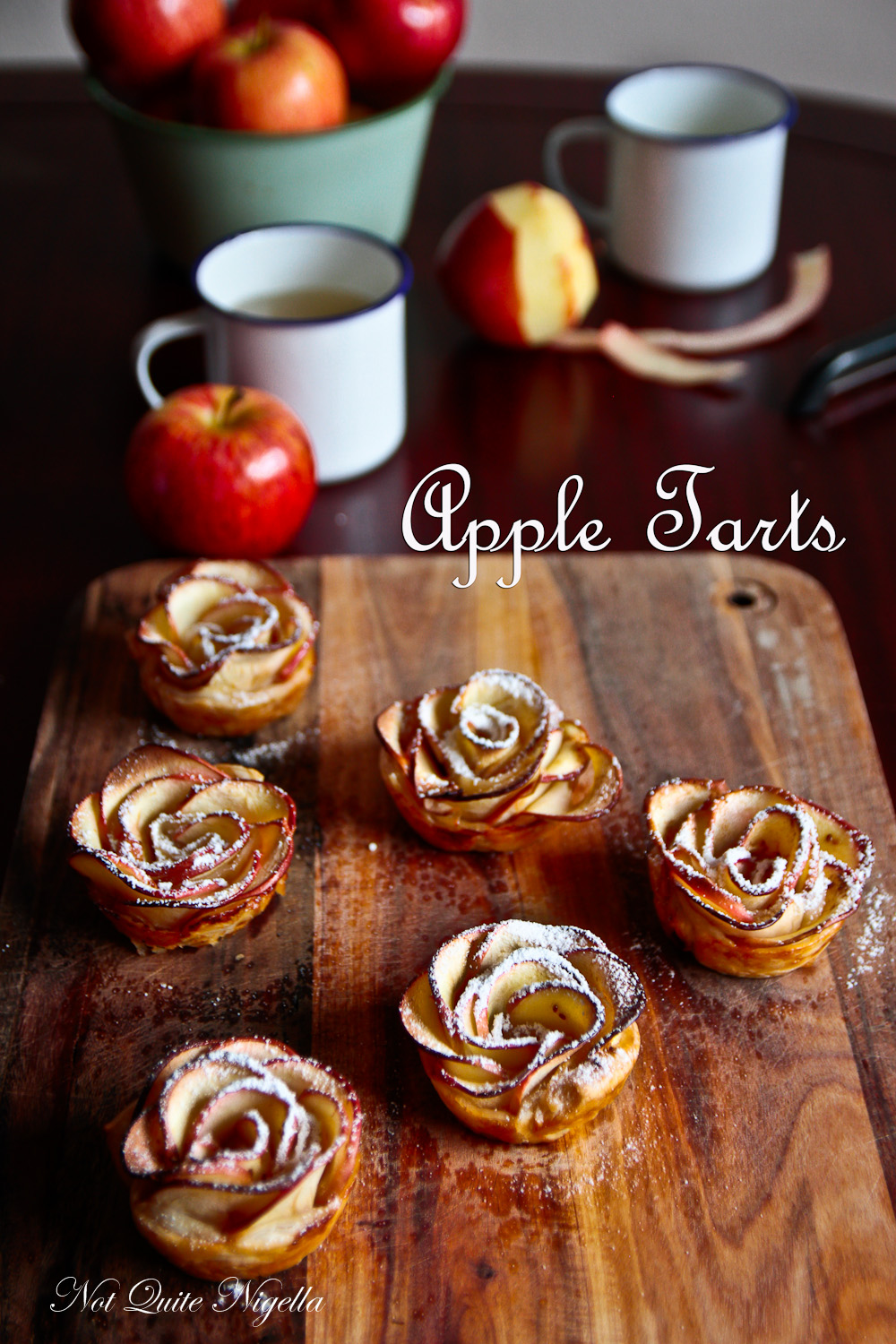 These ingenious apple flower tarts will have you marvelling at how pretty and yet how easy they are. Using the most basic of ingredients you can make these beautiful little tarts for a very special dessert. In fact it was such a clever and cool idea that I decided to make this the next Cook With Me challenge!

The Wizard turned to Mr NQN and paused his eyes glinting with light. "So this is a question that I ask people," he said. "But what if the first thing you would do during a zombie apocalypse?". We had just finished having dinner at our place and had moved to the lounge where we were serving some single malt whisky from Scotland.

I thought about it hard. Long time readers know that I can't watch shows like The Walking Dead because I'm actually fearful of zombies (they're real! did you see Sydney after the storms last week! That was like a zombie apocalypse!). So the only feeble answer I could offer was, "Stay inside with the curtains drawn. Make sure I had lots of water and check the internet and television...". Ugh I'm hopeless. Don't call me, I'll be dead.

However the Wizard already had a plan formulated in case of a zombie apocalypse. First he would take a knife or sword and he and his flat mate would make their way to a hardware store. Everyone else would be busy getting food and water but the hardware store would have crucial tools and weapons. Then he would go to a fire station and take the axes there and take a fire engine truck to make a getaway. 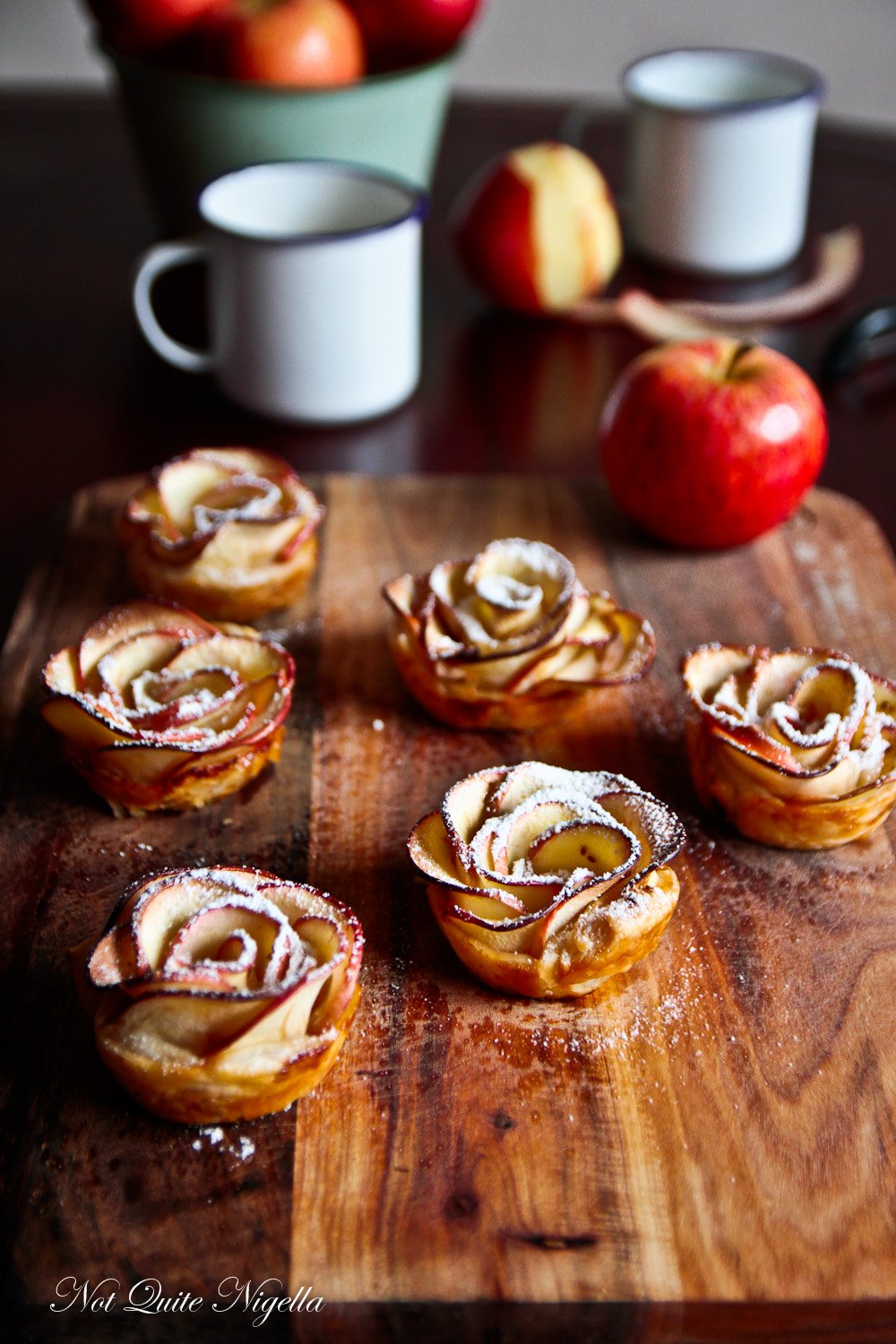 Mr NQN interjected. "But there are lots of places for zombies to hang onto on a fire truck!" To which The Wizard answered, "Ahh yes that's why I would have my friend there."

"Ok go on..." Mr NQN said, satisfied with the turn of imaginary events. "With my truck and weapons I would try to amass a colony of people that wanted to survive the zombie attack. Then we would get out of the city because it would be less populated."

"I know where I would go, there's this area in the Blue Mountains where it's this long area and there are two peaks so that nobody can invade without you seeing..." suggested Mr NQN. 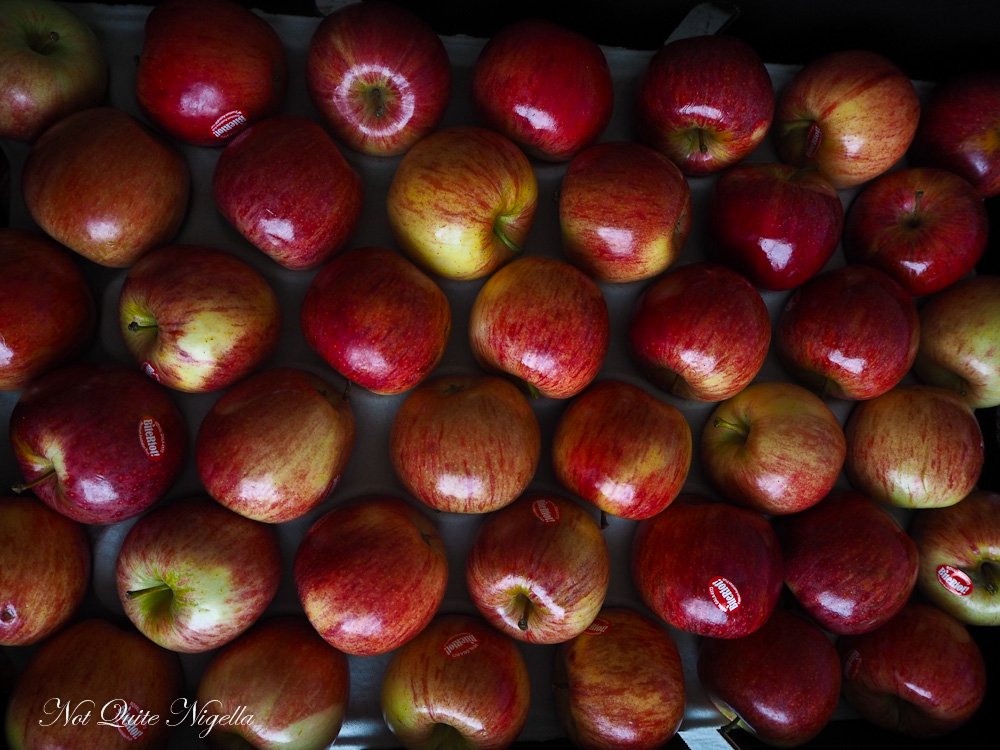 "Okay I'd swing past here and get you," The Wizard said pointing at Mr NQN and with that the plan was formed. I felt somewhat better because Mr NQN would bring me along because clearly I'd be completely useless in case of zombie attack and that way I'd have a fighting chance at survival. Because really I have no skills to survive such an occurrence. I started to think what my skills really were.

I could only come up with one. That is: rolling these apple tarts, a skill I had learned just that morning. We had an excess of apples from our recent trip to Orange and a box of royal galas from Bite Riot! and a box of heirloom ones from Boutique Garlic. So when I was trying to think up a dessert for dinner that evening all I knew was that it had to be an apple one. As if by fate, a friend sent me a link to a video that detailed the most ingenious method of making apple tart flowers by Cooking with Manuela.

To say that this gorgeous little apple tart is easy is an absolute understatement. It pays dividends and I became rather obsessed with making these over and over again. Once you take a look you'll realise how simple it is and how clever the idea is. You may even want to make these for Mother's Day coming up! The roses are absolutely foolproof and come together in the most ingenious way! 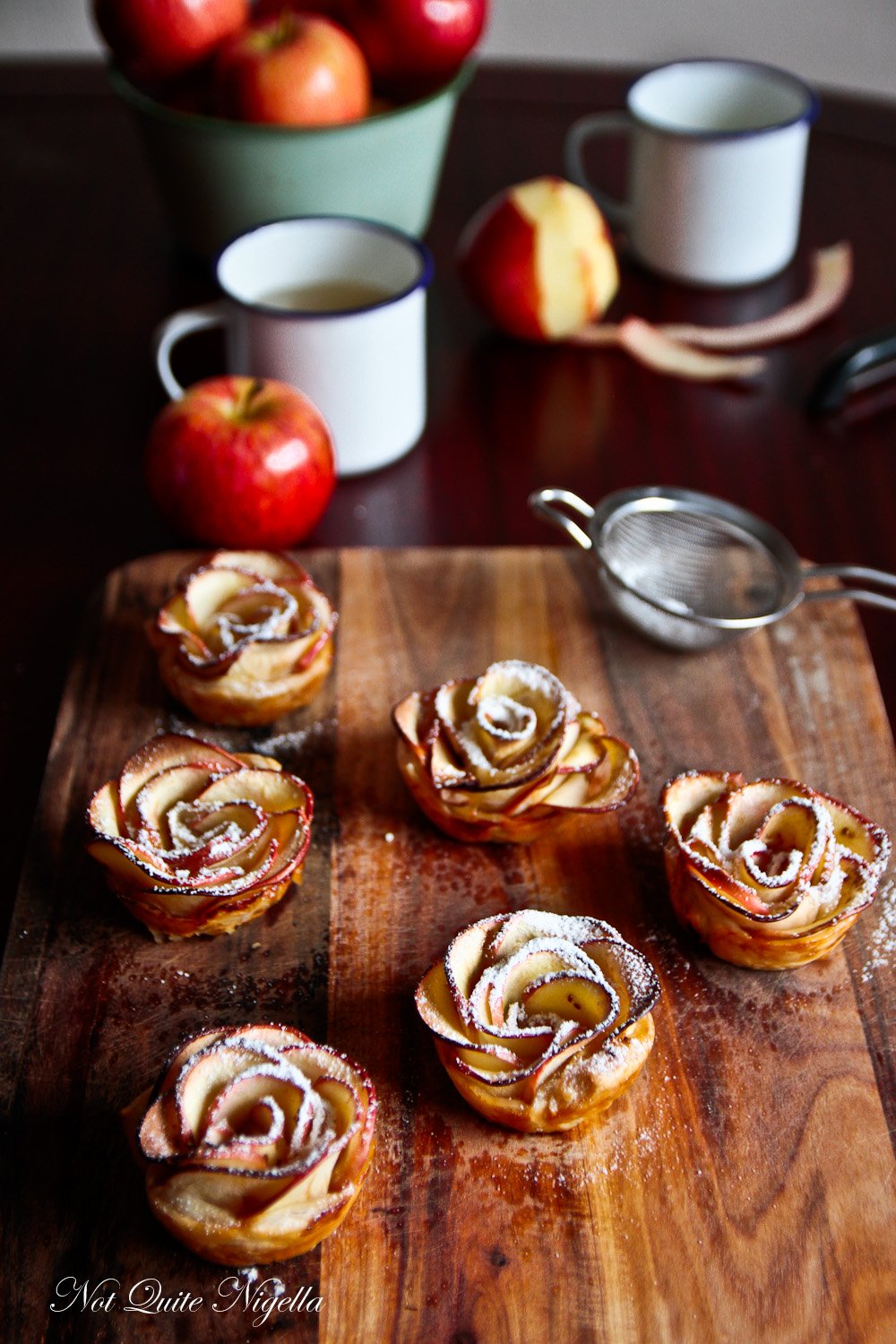 What is great about this is that you probably have everything to make these tarts on hand. We always seem to have apples in the fruit bowl and puff pastry in the freezer and jam in the fridge. The rest are pantry staples. In fact they're so easy I decided to make them the next Cook With Me Challenge! I know I usually tell you the ingredients beforehand but many of you may have them to hand.

And just to refresh your memory, Cook With Me is a cooking challenge where I share a simple (and in this case very clever recipe) and if you want to try it, you can do so over the next couple of week. Then you take a photo of your creation and either send it to me via email or put it up on your blog (if you have one, you don't need a blog to enter), Instagram, facebook or twitter making sure to tag me so that I make sure that I can see it and hashtag with #cookwithmenqn. The last one was a big success!

I think that these will be a total hit for Mother's Day so the deadline will be the 12th of May giving you jut over two weeks to do it which I hope is enough time for you to have some fun making these. I'll put up everyone's pictures and then pick three winners at random who will receive a cookbook from a choice of cookbooks. This is open worldwide to any reader! Feel free to ask any questions (just add it as a comment) and I promise to answer ALL questions.

Anyway I'd better go. You know I never got a promise from Mr NQN that he would take me along for the zombie exodus! I'd better learn some new skills...

So tell me Dear Reader, what is the first thing you would do in a zombie apocalypse? And what skills would you offer a colony? And what do you think of this next Cook With Me challenge? Will you be part of it? :) 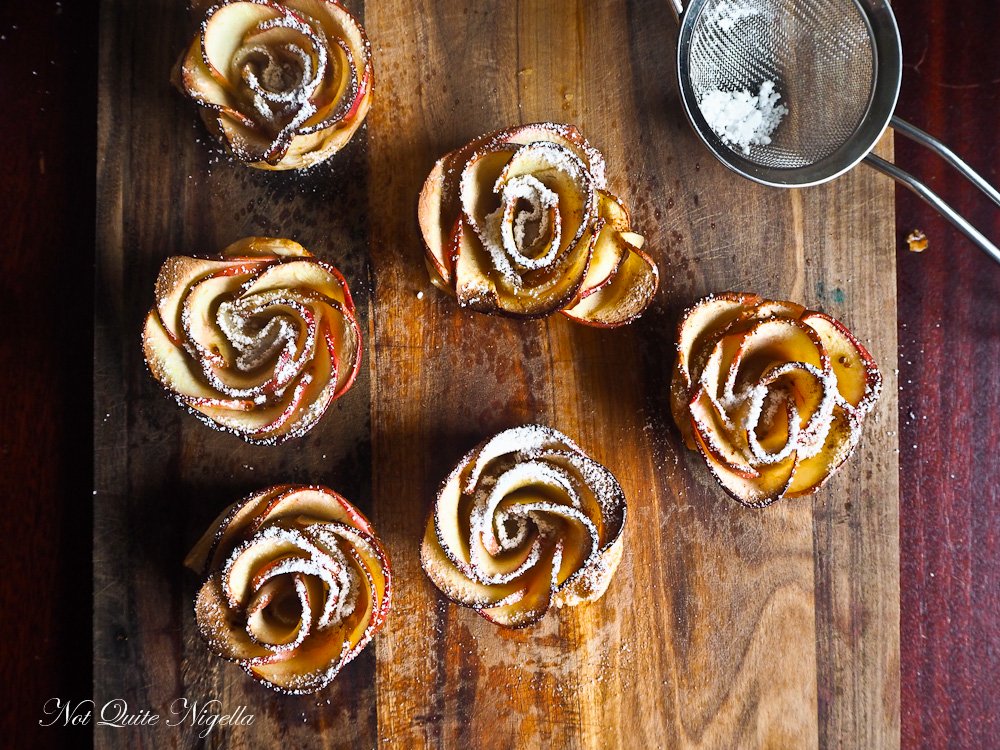 Adapted from Cooking With Manuela 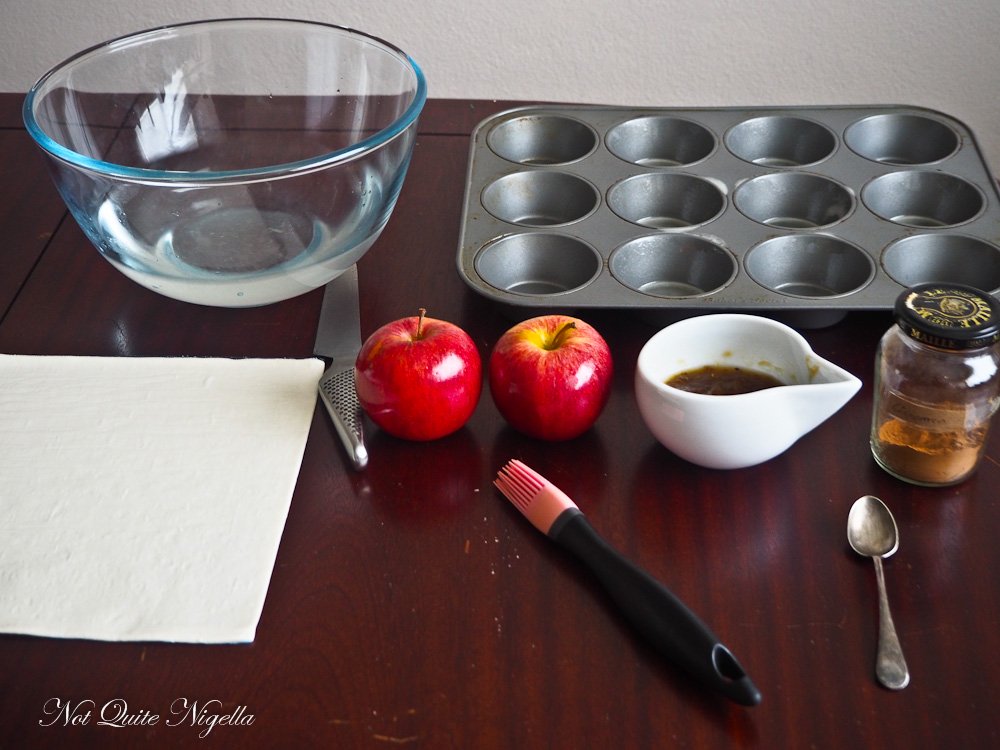 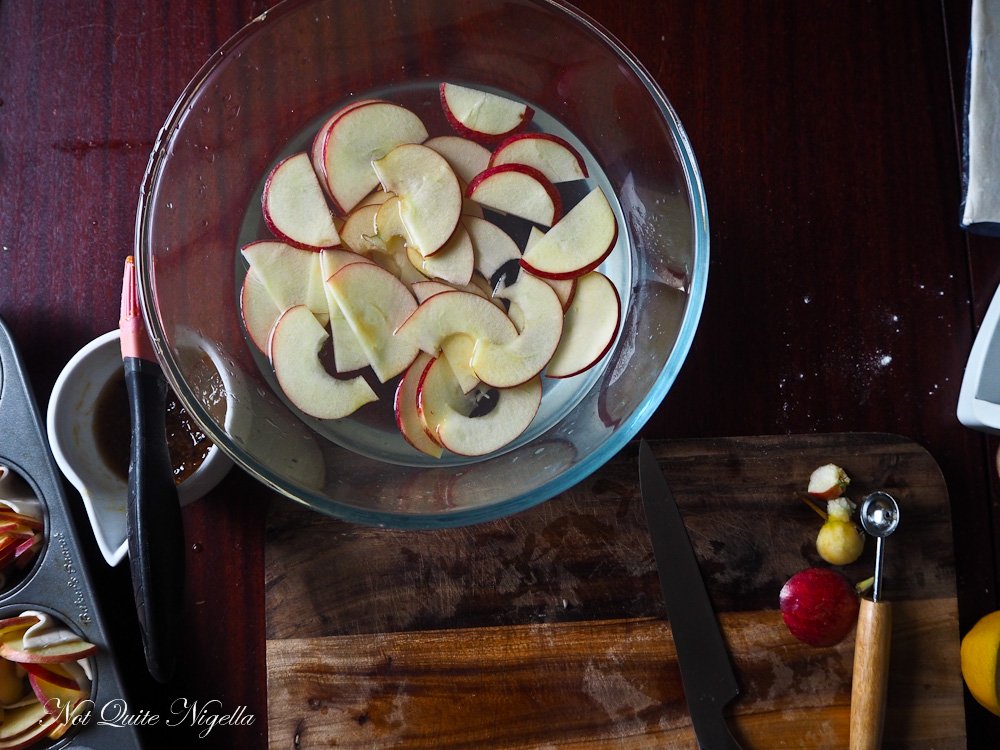 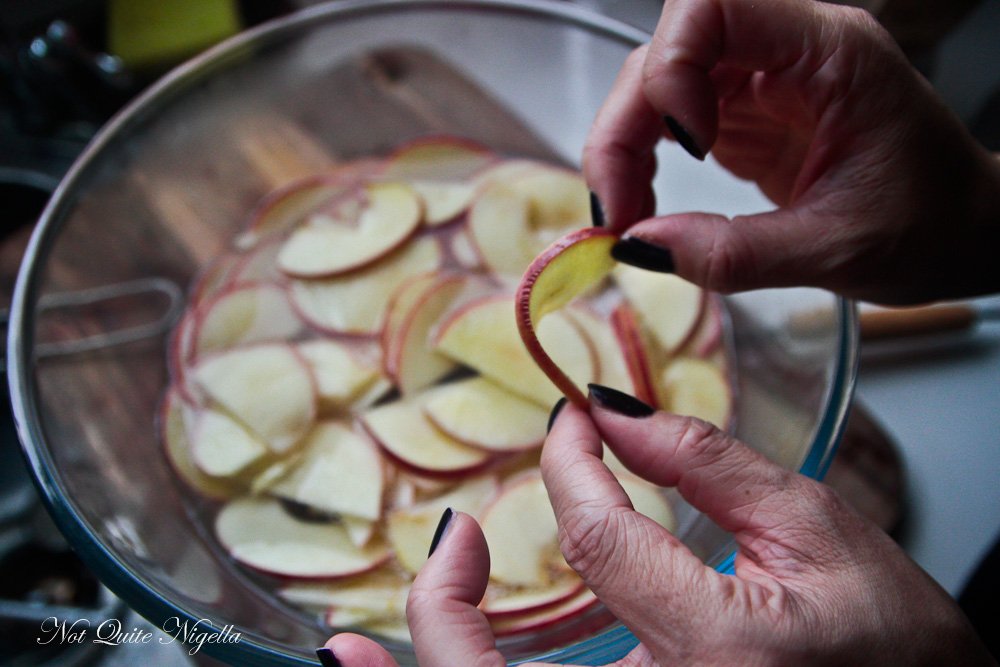 Step 2 - Microwave the apples until you can bend them but they aren't mushy or too soft. I started with three minutes and it took 5.5 minutes to get them the point that you could bend them. Drain the apples and run cold water over them so that they aren't too hot. 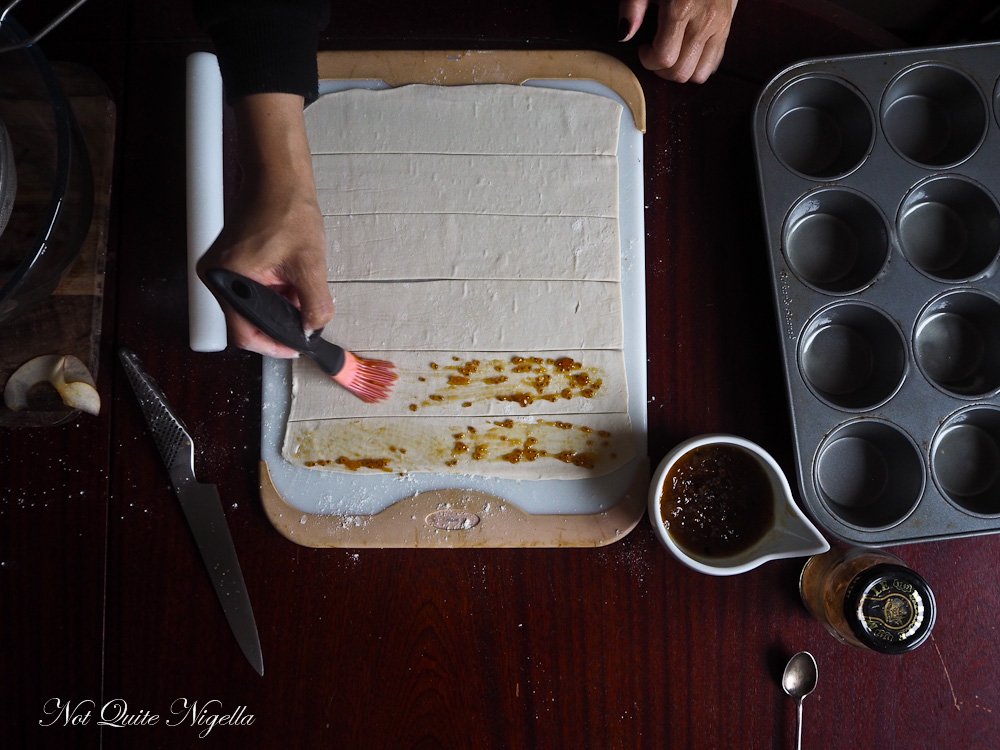 Step 3 - Spray a regular sized muffing or cupcake tin with oil or brush with butter (do it generously so that it doesn't stick). Flour a clean surface and roll out the puff pastry lengthways so that it keeps the same width but is longer. It should measure about 30cms/12inches in length. Cut into 6 long pieces 5cms or 2 inches in height. Spread with jam. 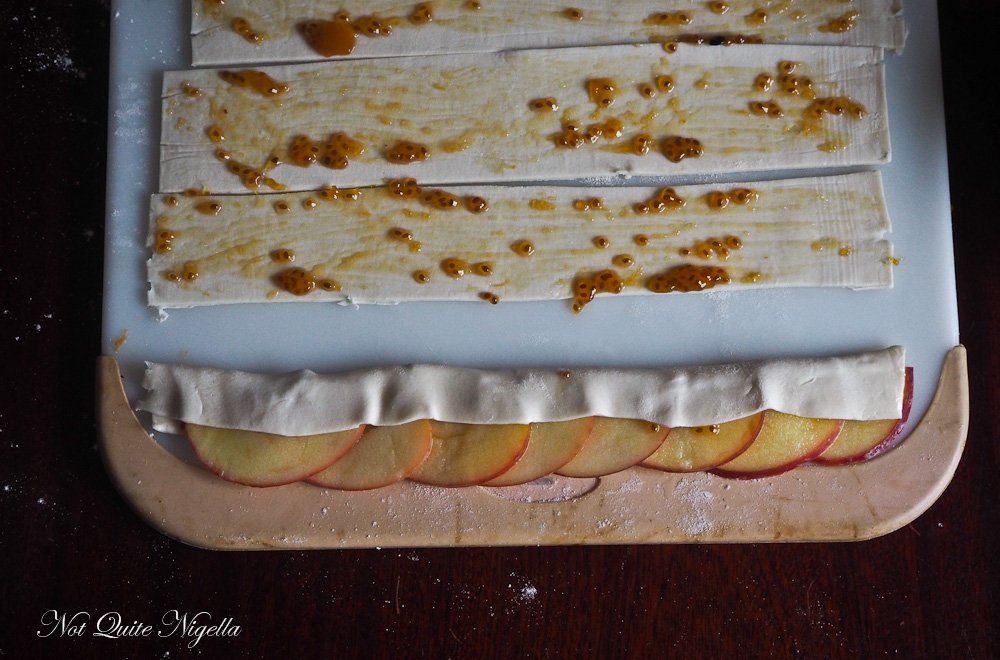 Step 4 - Line up the apple slices half up the piece of pastry so that they slightly overlap each other. Fold over the pastry so that the bottom half of the apples slices are covered. Then start rolling it up from one side to form a flower. Sprinkle with cinnamon. Bake for 30-40 minutes until the pastry in the centre is cooked. Serve with ice cream. 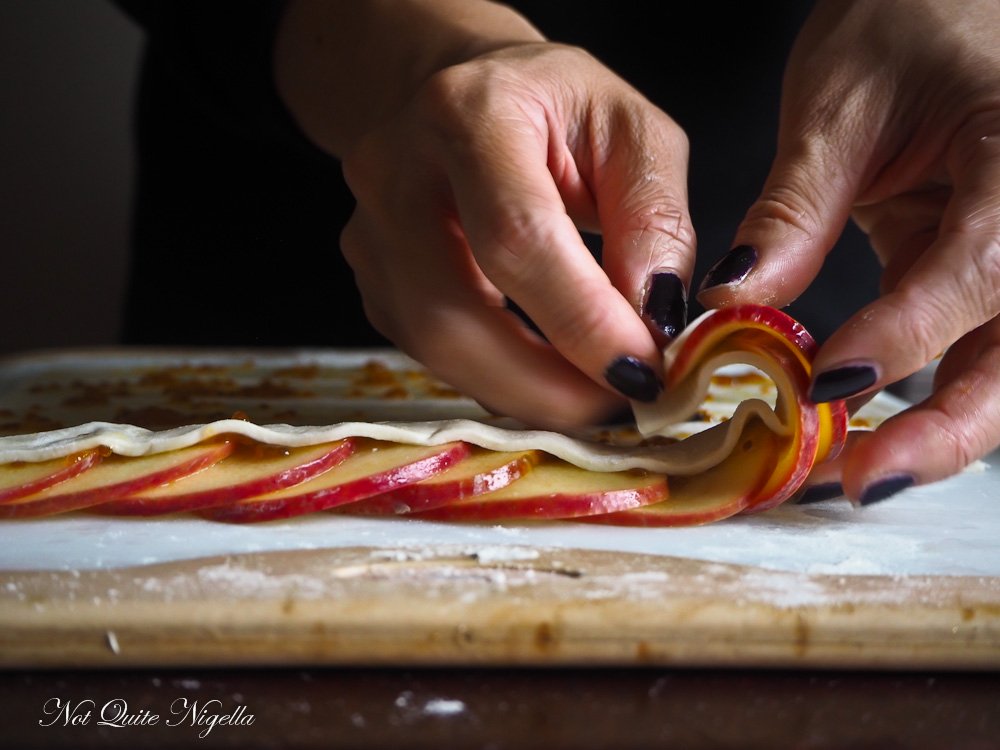 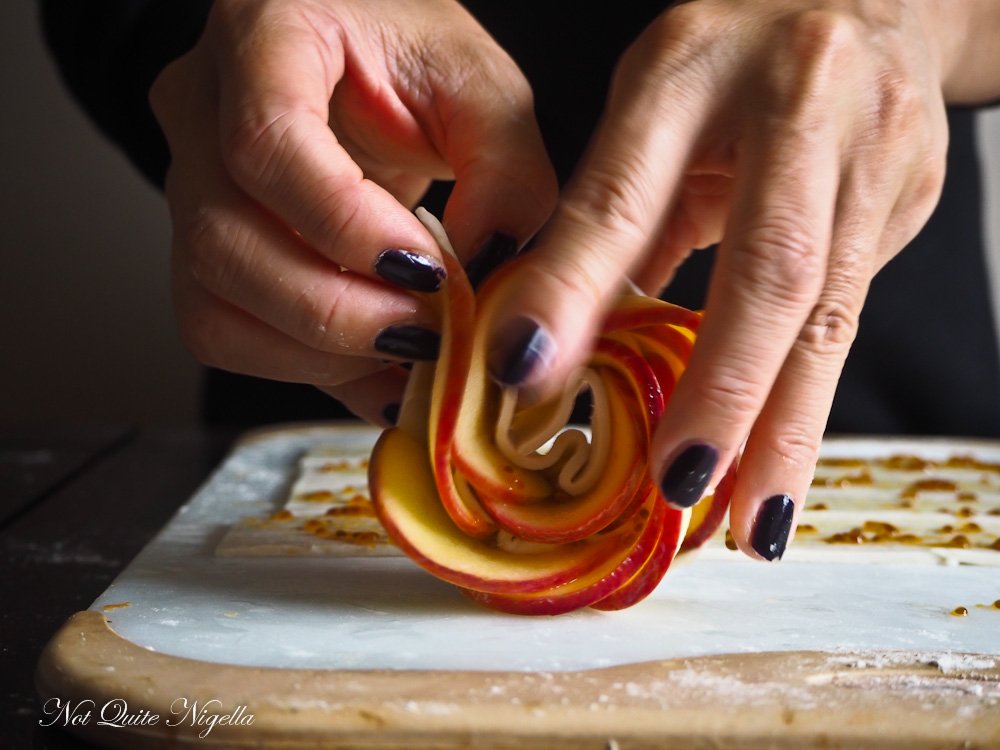 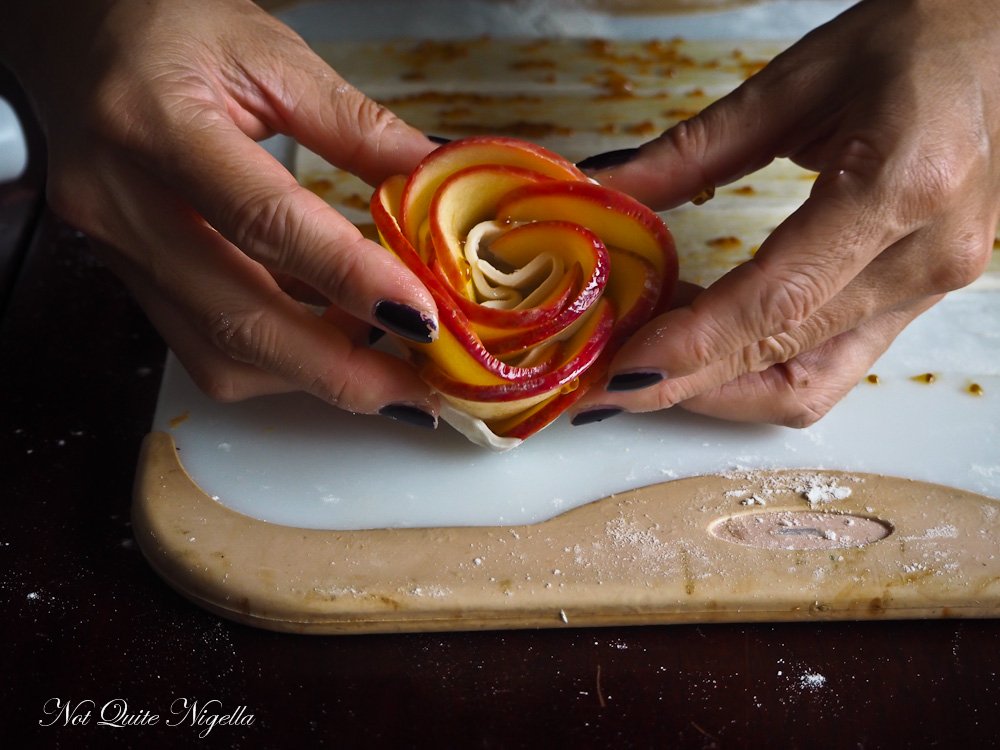 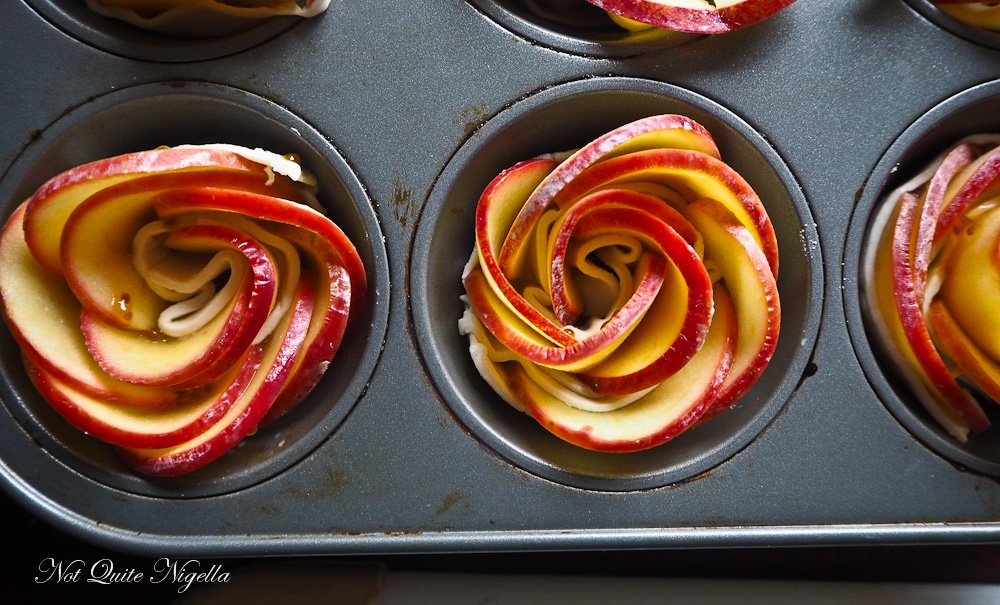