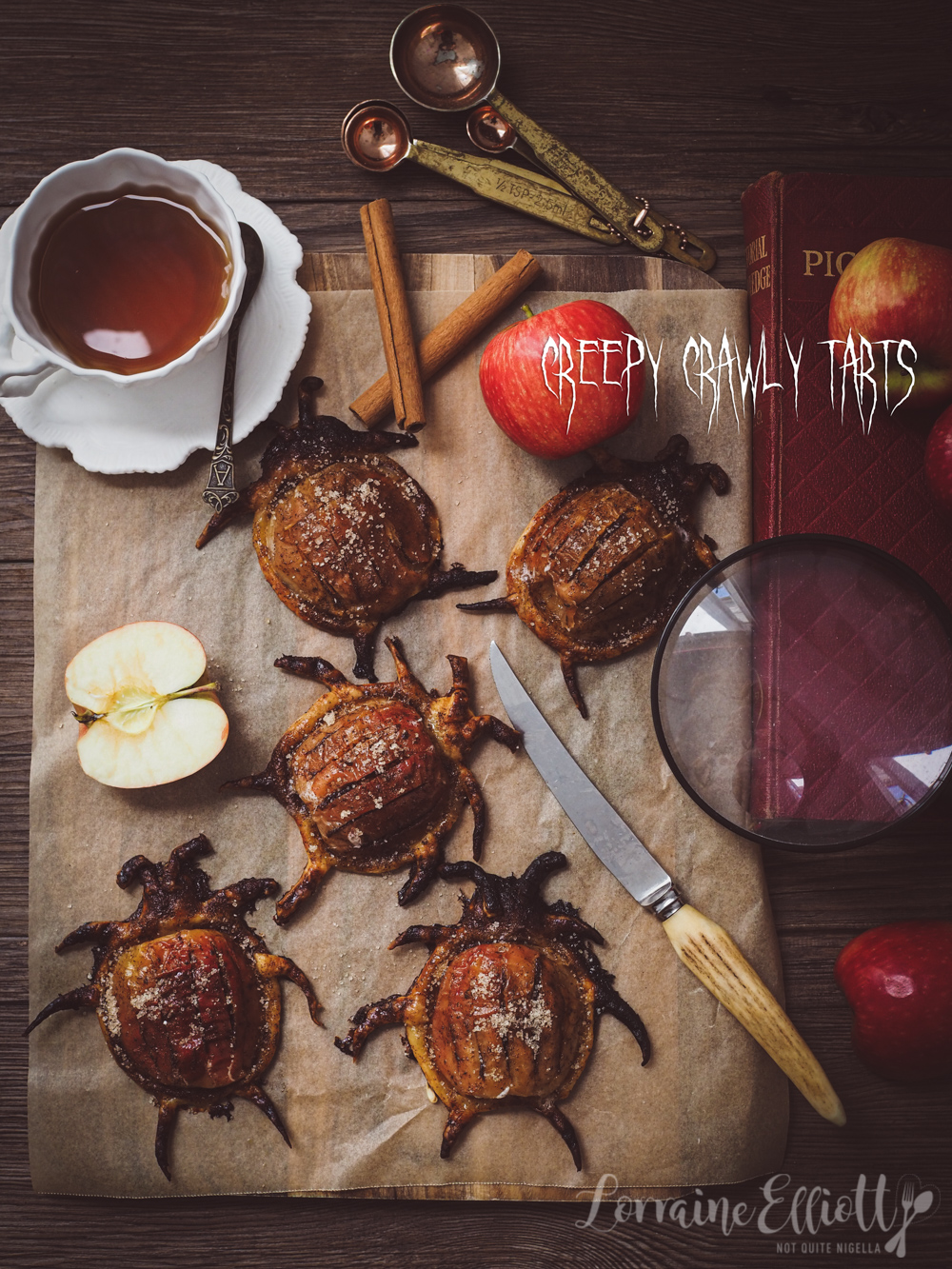 It's Halloween season my pretties and these scary Halloween beetle pies look much more gruesome than they are! These apple cinnamon pies are masquerading as creepy crawlies. They're so easy to make with very simple ingredients and don't require any special equipment or skills. This is a pushy recipe Dear Reader if you've got a little bit of Morticia in you!

I wasn't sure if these would work but they turned out even better than I could have dreamed! I first saw this idea on a Tiktok account called foodie_renee and she made them as apple tarts. As always I wondered how I could Halloween-ify them. Bugs! It would be bugs! I popped them into the oven and hoped for the best. I could smell the cinnamon toasting and the apples baking and after 30 minutes I opened the oven. They were perfect-well perfectly gruesome!!

These Halloween pies are basically made with puff pastry sheets, apples and a cinnamon sugar glaze that you brush on before baking. But really they're simplicity themselves and all you need is a paring knife and a hot oven and you're ready to go. I hope that you'll give these a try because they're creepy but delicious! 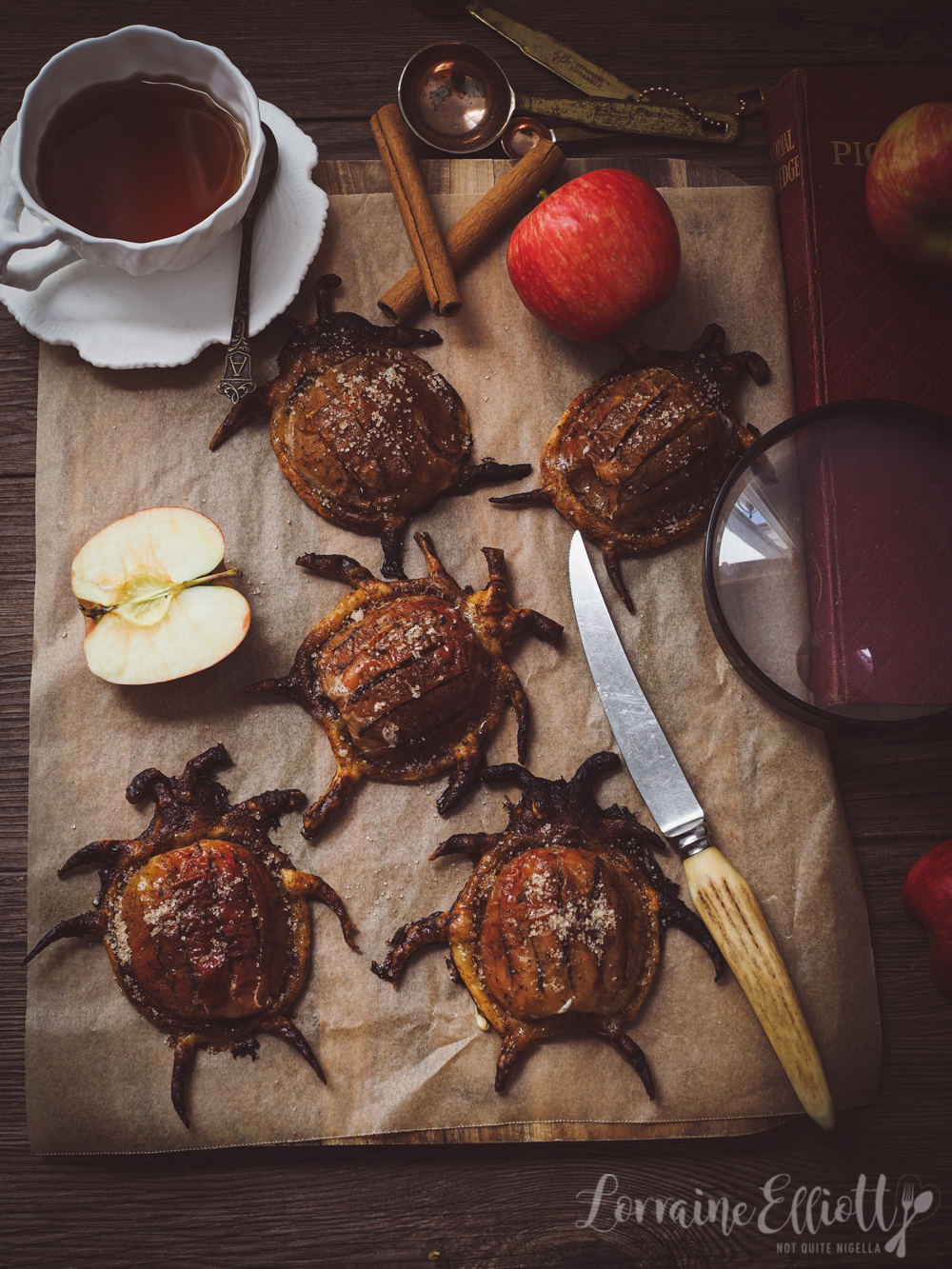 1 - In Australia most puff pastry actually doesn't contain any butter and uses vegetable fat instead. It also comes pre rolled out while I believe in America you have to roll it out yourself.

3 - Always place your puff pastry pies and tarts in the freezer for 10 minutes before you bake them. You get the desired pastry rise when the cold pastry hits the hot oven. In this case we are baking the pies at a lower temperature (160C/320F fan forced) than normal for puff pastry because we don't want the sugar to burn. 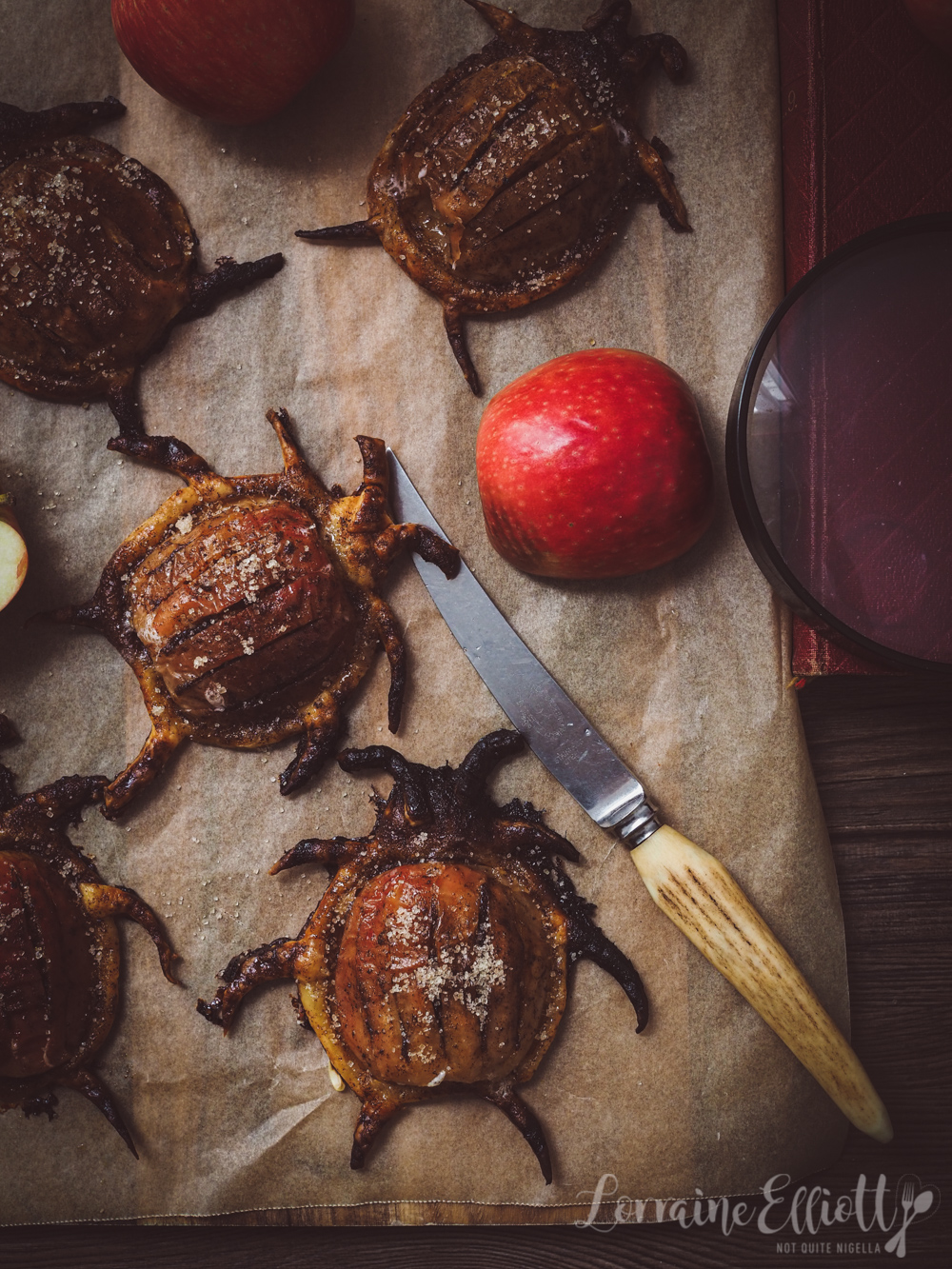 I mentioned before how Milo loves apples. Teddy has never been keen on them but whenever I bake something with apples Milo goes crazy for it and I had to put him in Mr NQN's office as he was such a pest while I was cooking (he got to eat the little apple scraps from this recipe). Some of you have asked how the two dogs are getting along and while a lot of people say that they'll eventually get along just fine, we found a really interesting power dynamic.

Prior to Milo's arrival, Teddy was a very confident dog. It was like he had forgotten his early timid behaviour. But once confident, bigger and boisterous Milo arrived things changed. Teddy took on a more sensible big brother role. They'd play together and Teddy would often growl at Milo when Milo would overstep bounds. This is perfectly normal behaviour as the older dog teaches the younger dog to behave and about boundaries. 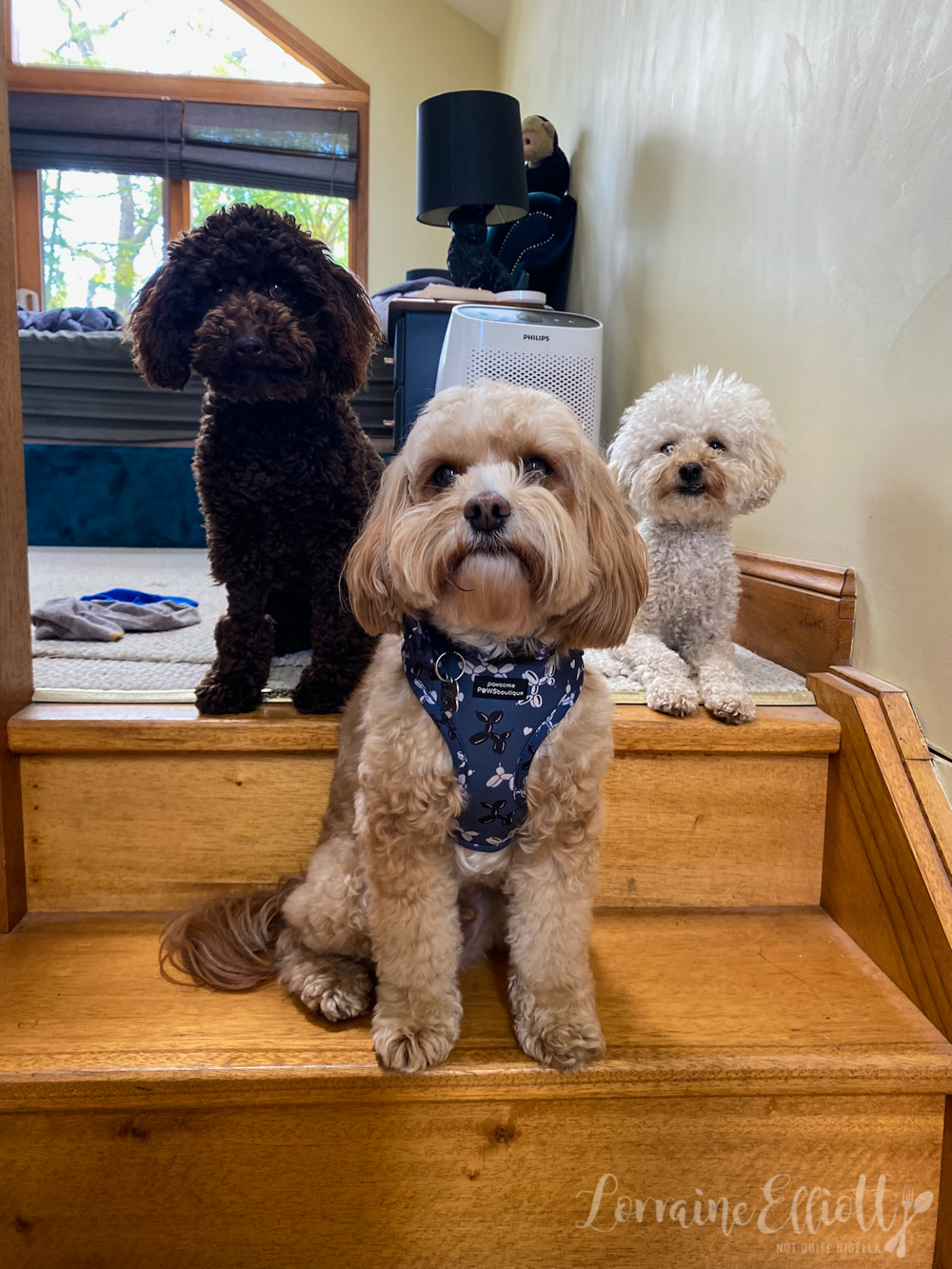 However we made a mistake when feeding them. Both dogs are smart but Milo is an incredibly fast learner and he knows that once their food comes out he sits perfectly so we would just give him his food first. Then Teddy who is a bit more stubborn and takes a bit of convincing to sit would eat. Little did we know that we were actually teaching Milo that he was the top dog as he got to eat first. Teddy's confidence shrank and it came to a head one day when Mr NQN, Teddy and Milo were walking down the stairs. Milo bit Teddy's tail which caused tiny Teddy to fall down the stairs and then Milo just ploughed on ahead. We were devastated when we saw that interaction. 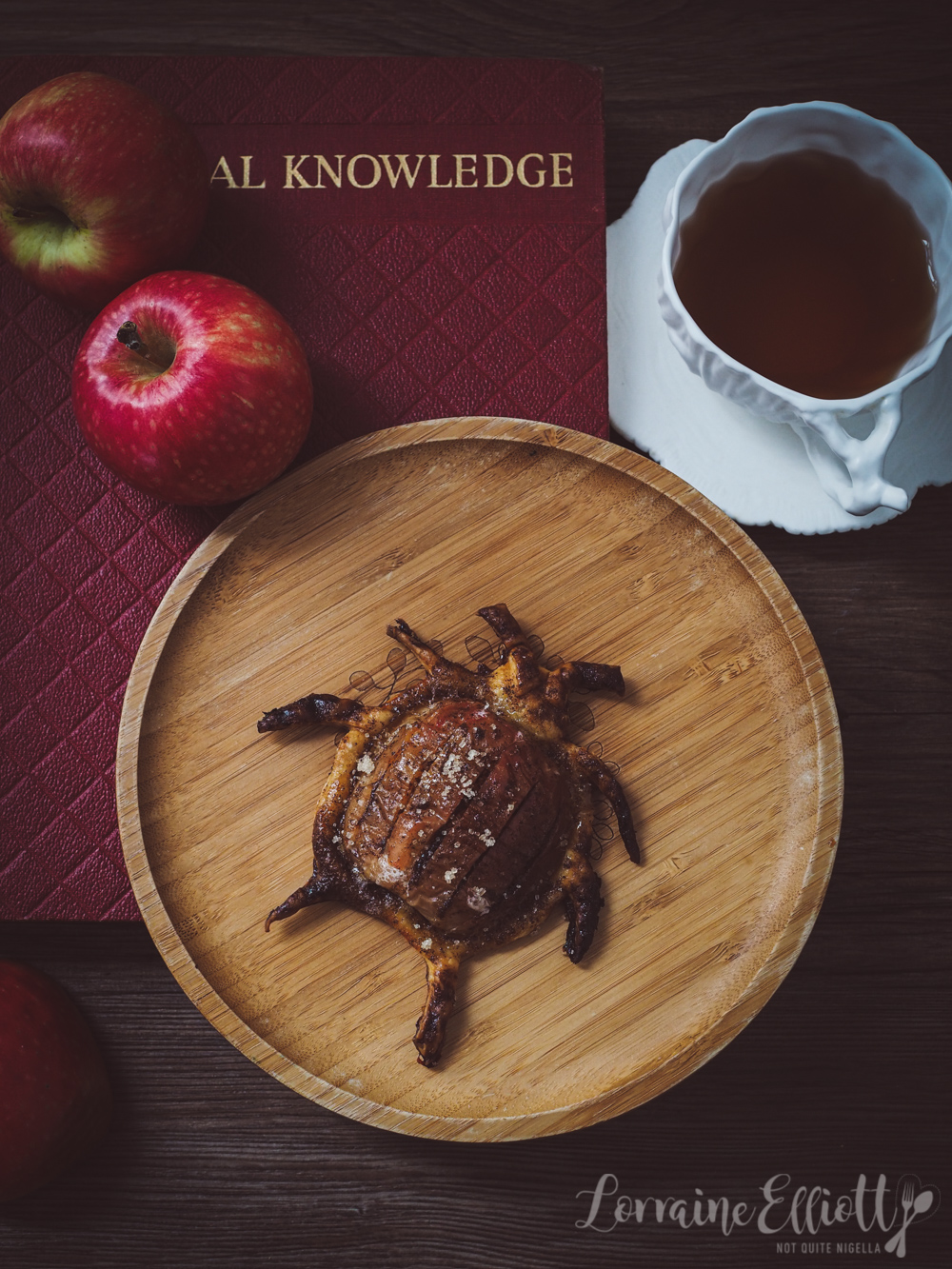 We weren't sure what to do but a part of me wondered if feeding Teddy first before Milo was a problem. We tried feeding Teddy first and Milo being a quick study rapidly learned that he had to wait patiently while his big brother ate and then he would get his food. This little gesture seemed to restore the balance and now the two dogs know their rank in the pack. While Milo isn't a second class citizen he no longer overpowers and bullies his brother due to his size. Who knew!

So tell me Dear Reader, do you have any tips for owning two dogs? And are you excited for Halloween? 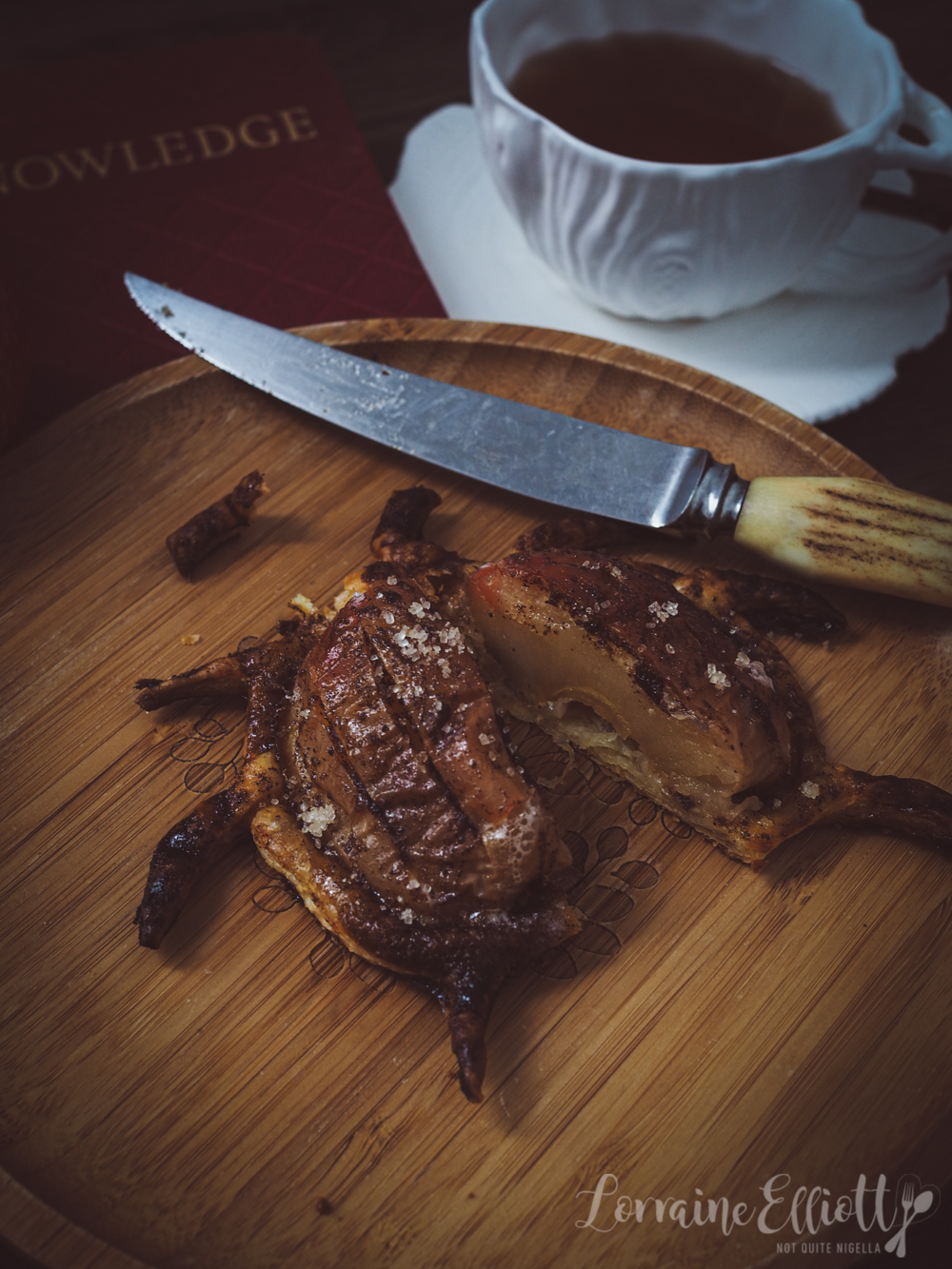 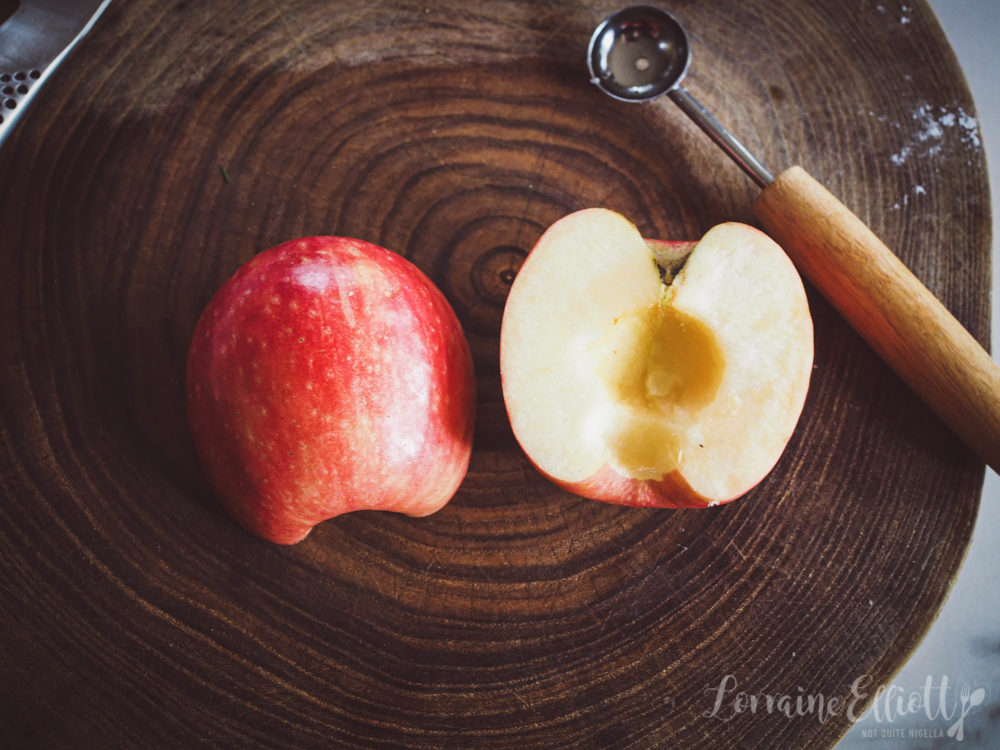 Step 1 - Preheat oven to 160C/320F fan forced. Line 2 baking trays with parchment. Cut each apple in half and then remove the core. Using a sharp paring knife, cut out little slivers from the top of the apple going from the top to bottom. You will want around 5-6 slivers removed from each apple half. 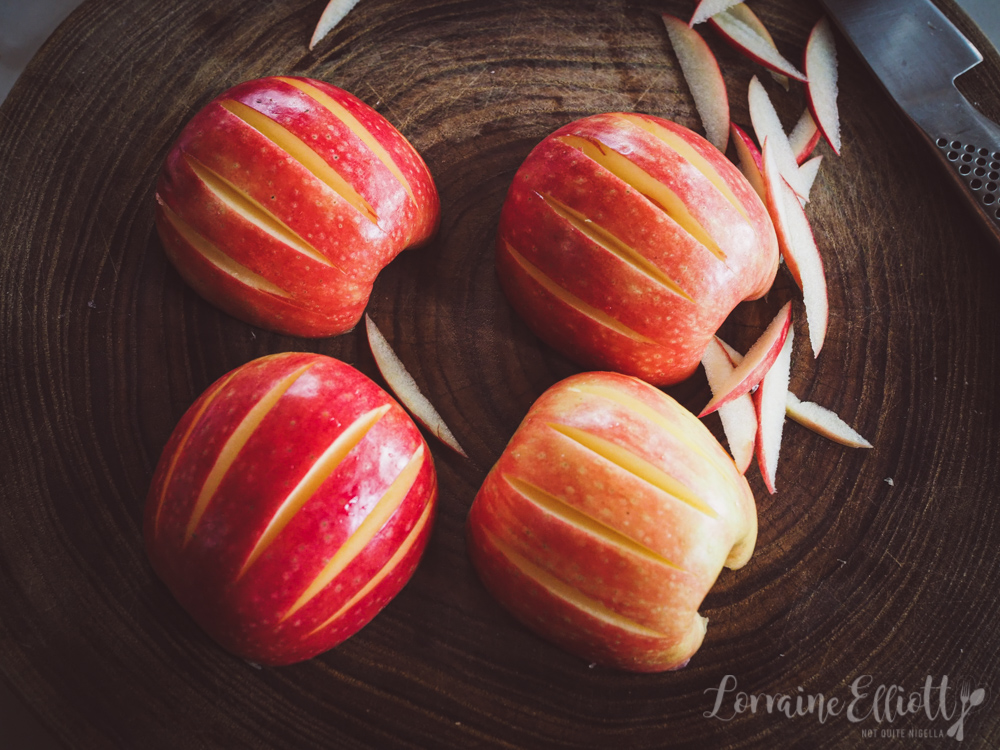 Step 2 - Cut each sheet of puff pastry in quarters. Place each apple half on each pastry square and using the knife cut around the apple tracing out a head, legs and arms and around the body. The puff pastry needs to be firm to do this or it will be difficult to cut. Using the reserved pastry cut out two small antenna and a set of extra legs and gently press these onto the body in the middle of the torso. 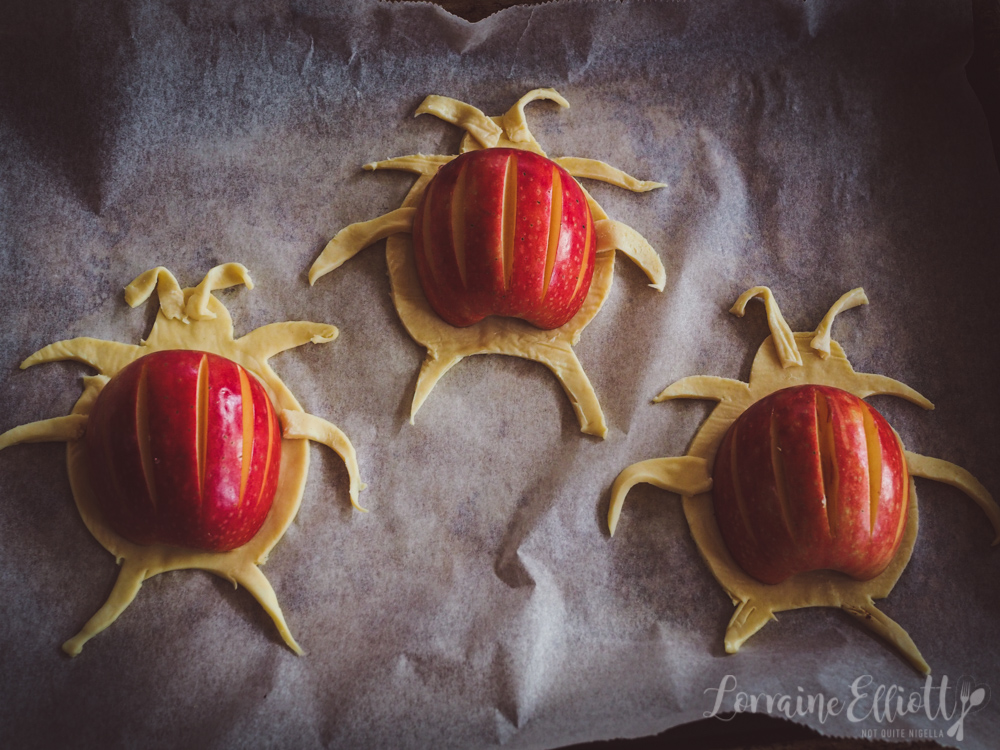 Step 3 - Place the tarts in the fridge or freezer for (freezer 10 minutes, fridge for 20 minutes) just to let the pastry firm up. Make the cinnamon butter glaze. Mix the melted butter with the sifted icing sugar, cinnamon and egg yolk. 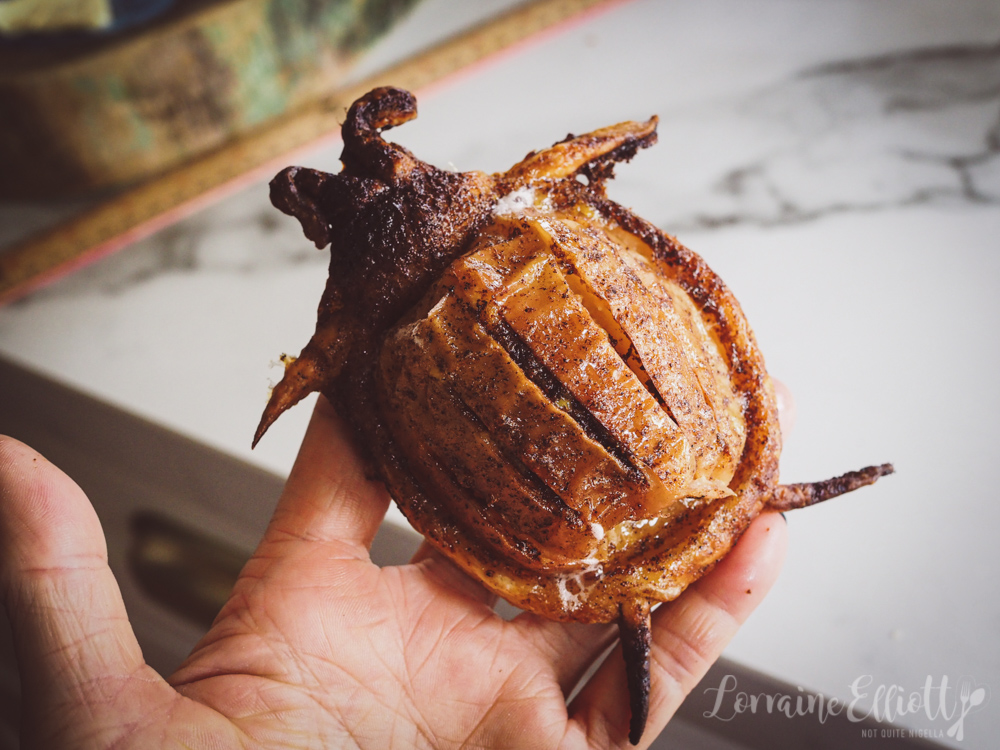 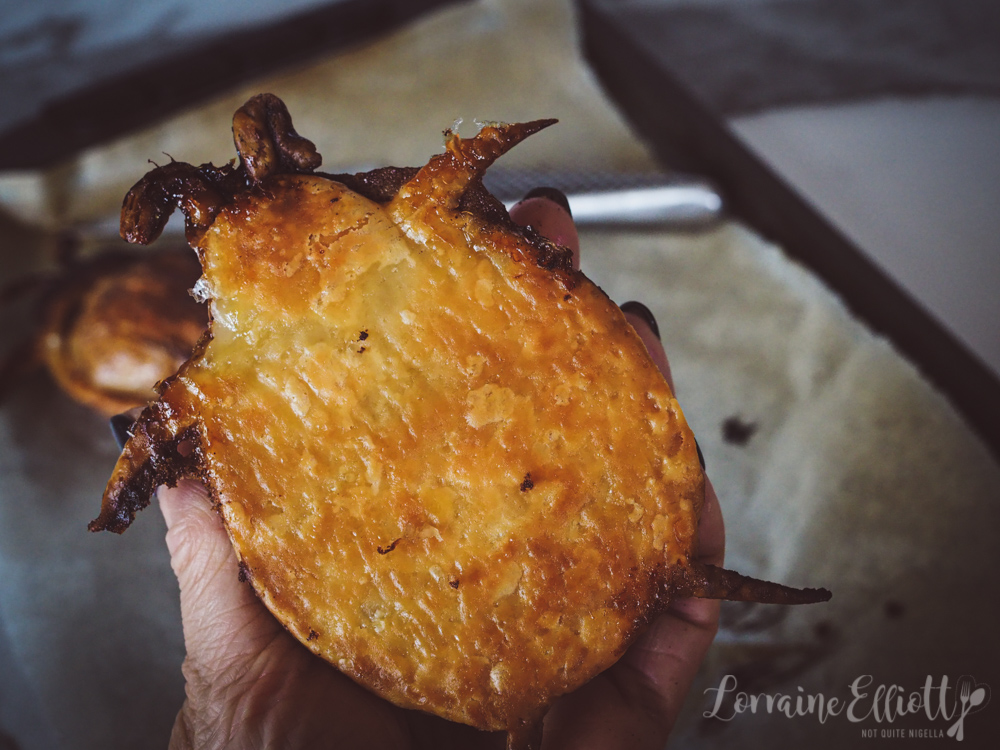 The underside is golden brown

Step 4 - Brush this cinnamon mixture thickly over the apples making sure to get it into the crevices that you've cut out. Then brush it over the pastry part and bake for 30 minutes. 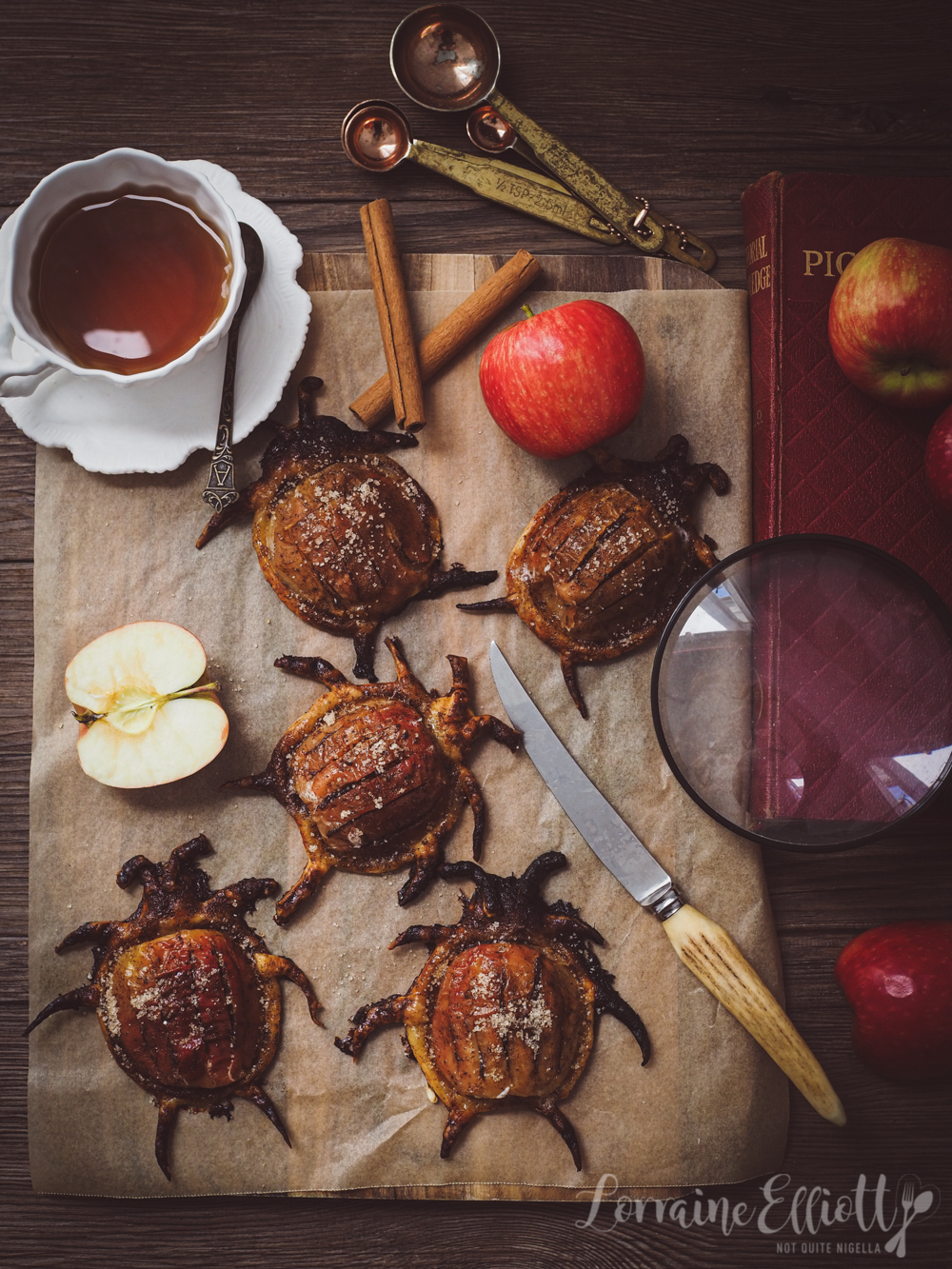