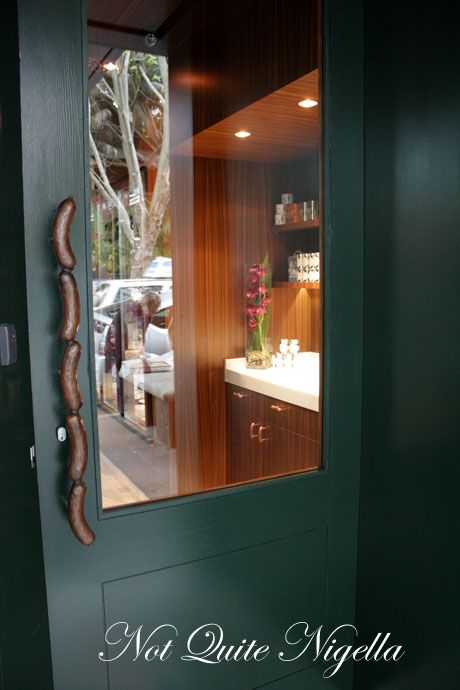 "Like Louis Vuitton meets a Butchers" I told my friends who all asked what the interior of the new Victor Churchill butcher was like. Sadly I had to miss the opening party for the butcher but things have a way of working out and as luck would have it I met the owner Anthony Puharich at a party and it turns out his sister Anita is a long time reader of NQN (Hi Anita!). The next day Anthony sent me an email asking me if he could give me a tour around of the new shop and show me all of the little details. An offer like that cannot be refused. 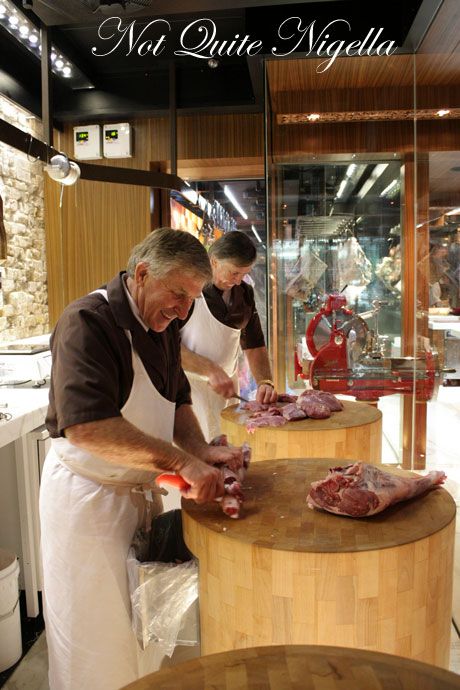 The outside of the shop is interesting. There are Wellington boots, a glistening terrine, a cut of meat and a field of lavender and this crypticness is deliberate in order to intrigue customers. When I step closer I glimpse the sausage link door handles. Oh yes this is the Willy Wonka of Butchers and in true Willy Wonka form, there's one that I think is the absolute coolest thing in the world, but more on that later... ;) 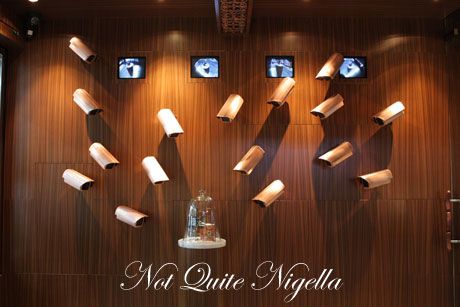 _Cameras to amuse kids (and adults) _ 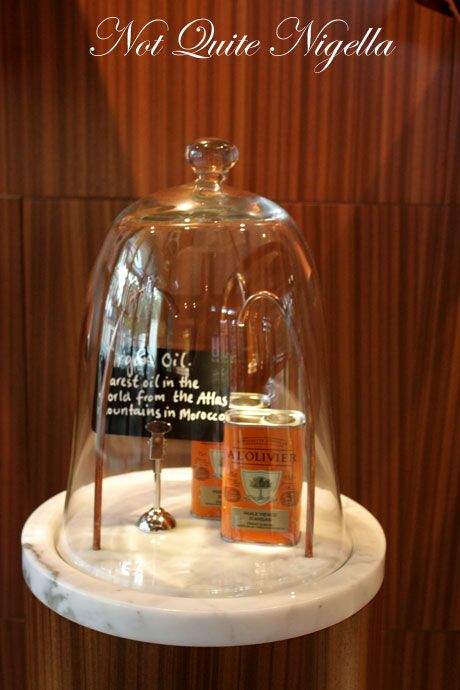 This week's product: Argan Oil, said to be the rarest oil from the Atlas Mountains in Morocco

To the left there's a camera display which you can call "the babysitter" where children love to spend plenty of time making faces at the camera and staring at the latest glass dome topped curiosity that changes weekly (this week it's Argan oil). Also on the left there's the bespoke butcher's room where Victor (or Vic as he is known) along with other long time butchers prepare your meat to order. 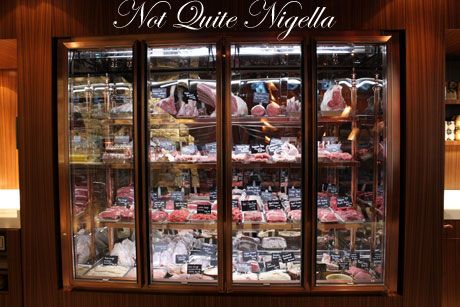 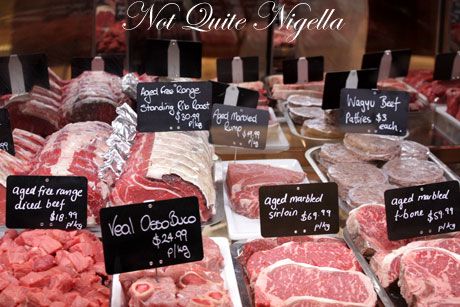 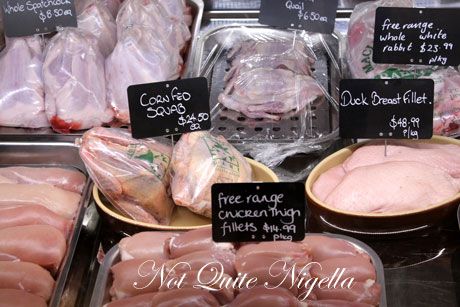 On the right the first display is of the meats available. You simply tell the staff which ones you want and they'll wrap it up for you and if you need it cut a particular way, it will go to Vic himself or Danny who says smiling "There aren't that many of us butchers left". In the meat fridge, there's all sorts of grass and grain fed meat, corn fed squab (the hardest product to source in the store) and the things that get me excited like marrow bones and rabbit (a steal at $23.99 a kilo). Prices for the meats are surprisingly on par with or in many cases less than other butchers because of the sheer volume of meat they supply and the fact that they are wholesalers. The name Victor Churchill is an amalgamation of Victor Puharich from Vic's Meats and Victor Churchill who owned the butchers at that location (since 1876). 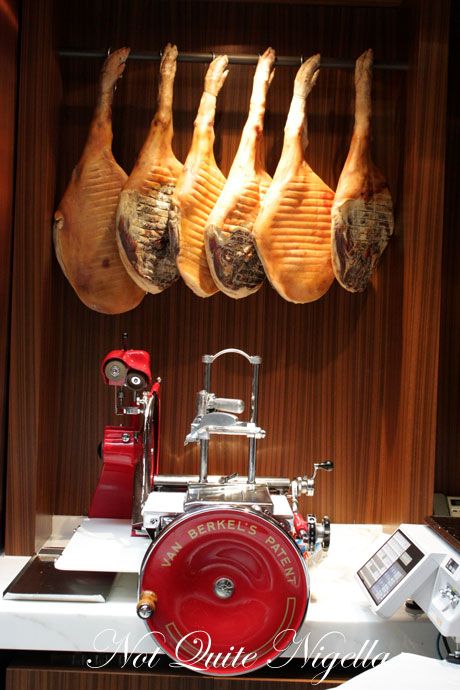 Victor Churchill is part of Vic's Meats who are Australia largest wholesaler of meat. Vic tells me that at their Mascot location they hold 500 tonnes of meat at any day with 20-30 tonnes sold a day. They're the supplier to 85% of the restaurant trade and they supply 90%  of the hatted restaurants with meat. This past Winter they sold 1.5 tonnes of beef cheeks and 1.5 tonnes of Lamb shanks a week and now that summer is coming, items such as cutlets, steaks and lighter fare will become popular. 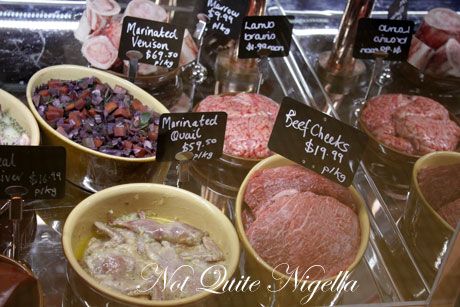 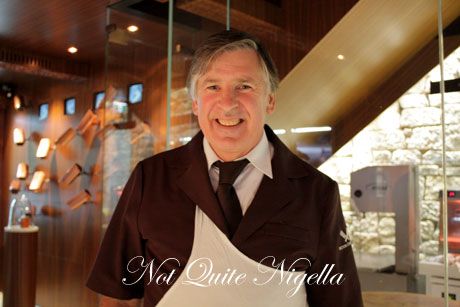 I ask Vic what he eats every day and he tells me that come Summer his favourite cut is the Scotch Fillet and there's not a day that goes by without him eating meat although he does confess he has a love of seafood too. 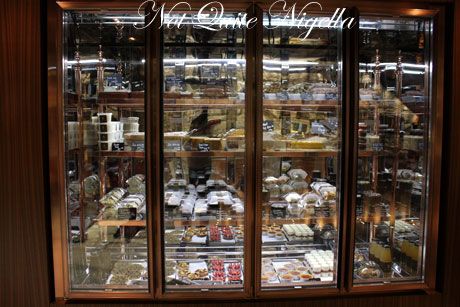 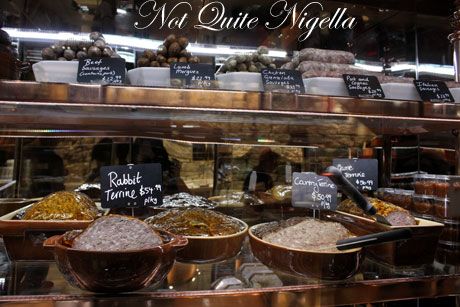 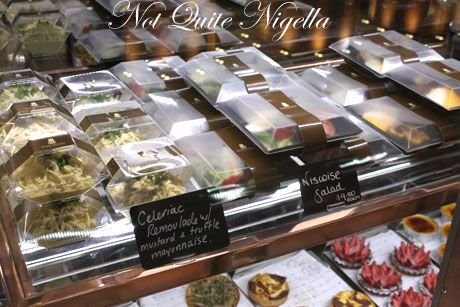 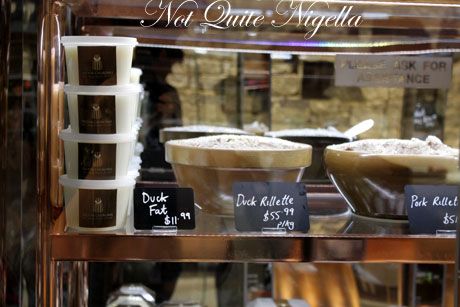 Further along the right hand side is the charcuterie and ready home meal fridge. There is a dedicated charcuterie chef on board at all times and you can also buy the items and ask them to cook it for you. As well as salads, soups etc, there are also desserts. I watch as they prepare large branches of deep purple rhubarb for the pannacotta. 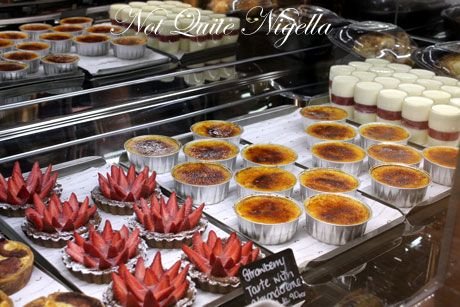 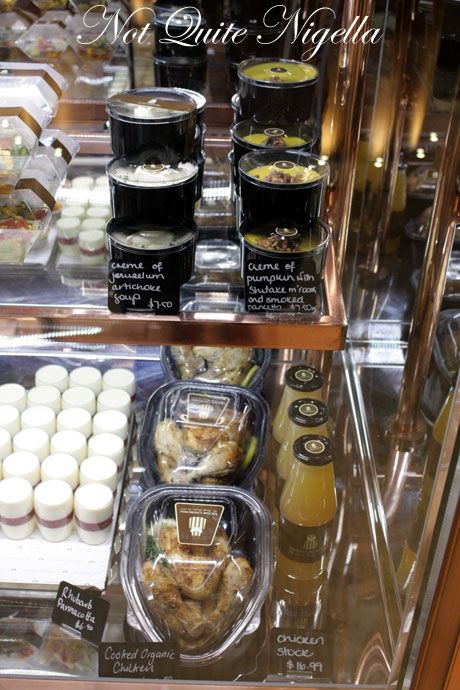 Soups and chicken stock made on the premises 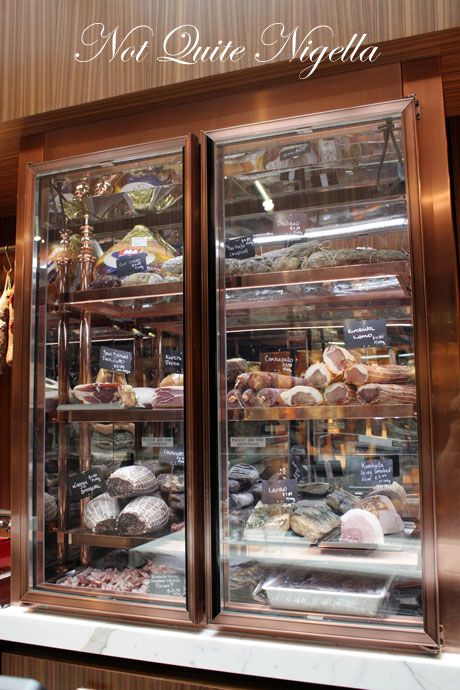 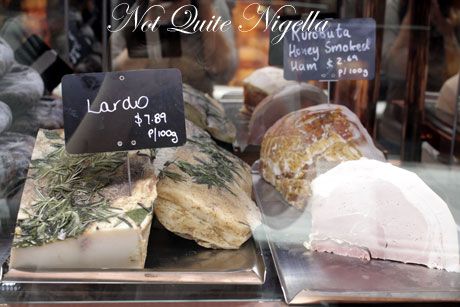 The next fridge along houses the cured meats and the one that intrigues me is the Lardo which is pure pork fat from the back of the pig cured in a cave and seasoned with herbs and the way to eat this is very thinly sliced on toast. And I'm sure that whilst it's not terribly good for you too, you only live once right? ;) 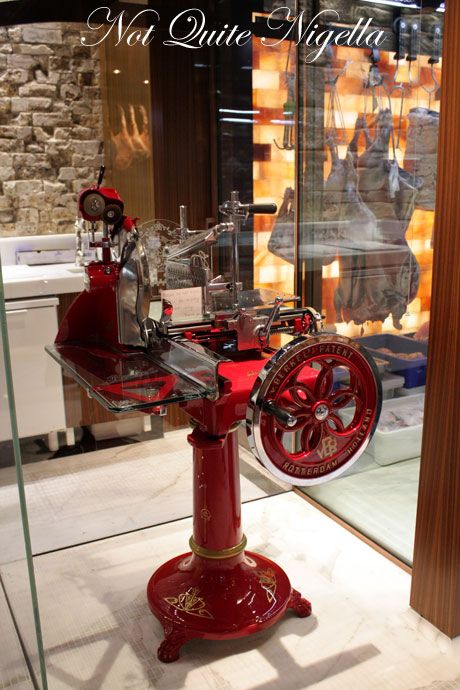 There is also the Berkel traditional flywheel meat slicer that took 18 months to restore to its full glory at a cost of $150,000 as the parts had to make sourced from all over Italy (if you want one of these, you'll have to join a waiting list). It holds pride of pride in the centre of the store but there are also two smaller versions used to slice meat "Other ones are electric and give off heat which is not good for the meat" Anthony explains. He then shows me a refrigerated mincer, the only one in Australia to again ensure that the the meat doesn't have any heat applied to it. 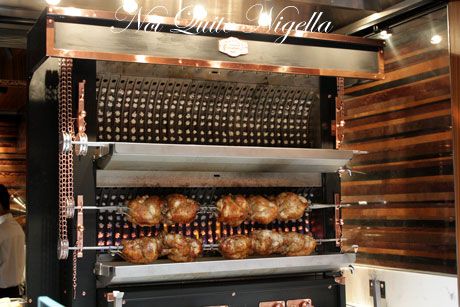 Rotisserie with a wall of hides on the right

Next to the cured meats is the giant rotisserie where chickens and ducks are roasted fresh and I admire the brass chains "It's imported from France" Anthony says. He then shows me the Salt wall. It's a wall of Himalayan Salt Bricks, lit from behind. The idea behind this is to impart salt into the air and to reduce humidity. I enter the room and open my mouth and there's a definite salt in the air with the meat hanging and rotating around in a circular fashion. He shows me the next wall which is the wall of different hides and fur finishes styled into a layered brick pattern. 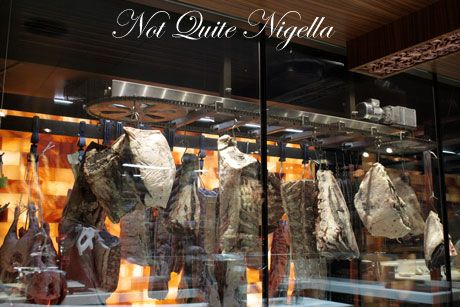 During the time I'm there crowds come and go and for a weekday afternoon it's quite crowded. Helen Greenwood from the SMH stops by unannounced and asks Anthony questions whilst taking notes. "There have been a lot of people just dropping in. I think they want to check up on whether dad and I are actually here or not" Anthony says smiling. 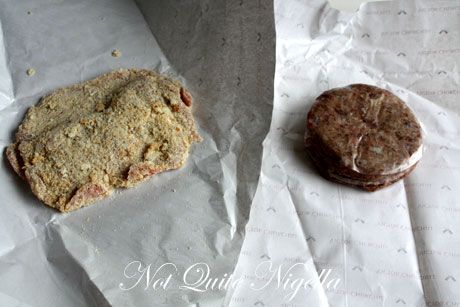 As I needed to cook something very, very quick that night for dinner (read: 15 minutes or under), I chose some wagyu burger patties ($3 each) and some veal schnitzel. The patties were beautifully juicy and delicious and the schnitzel was unbelievably tender with not a smidgen of toughness. 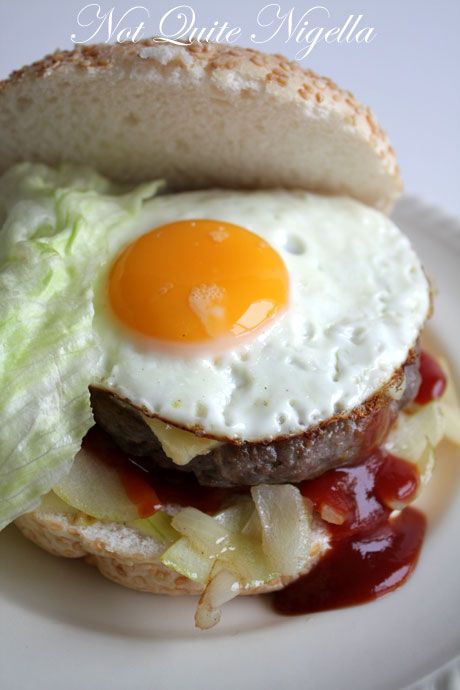 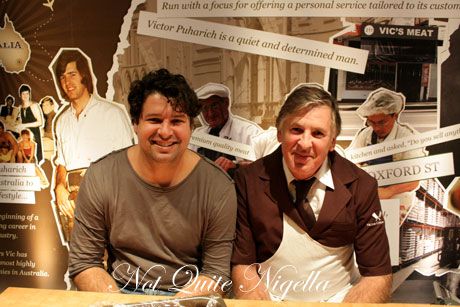 And my favourite little touch? I've saved that for last. It's the secret aromaway where they pipe the smell from the rotisserie to the street outside (try and guess where it is). See, it really is like Willy Wonka for meat!

So tell me, what kind of Wonka land would you design? A Meat themed one? Or a French Pastry one with pastries and macaron rides? 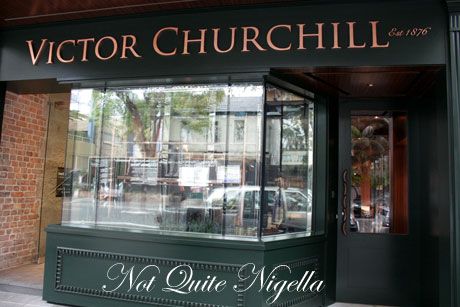