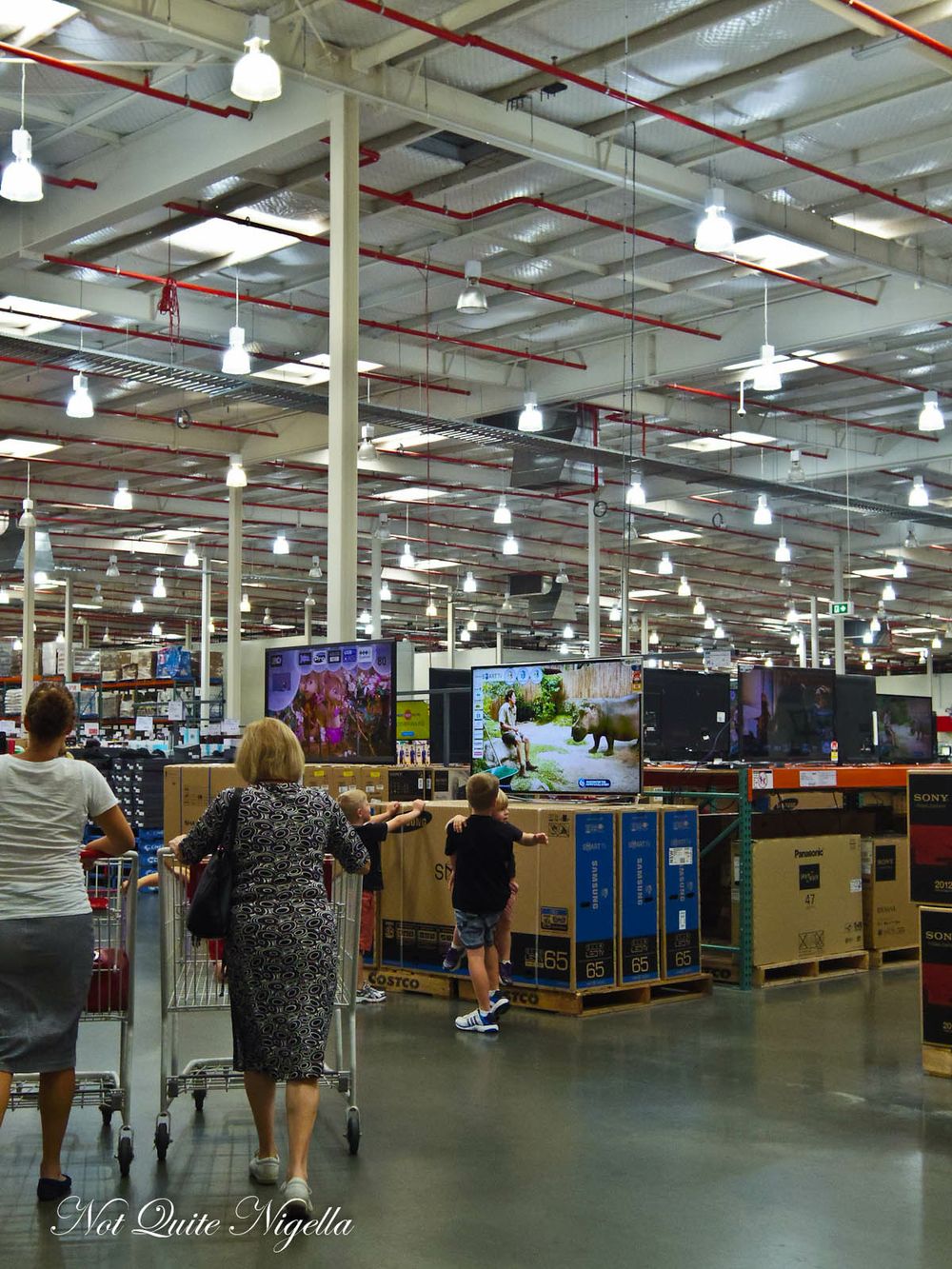 Often, people look at me as if I've lost my mind. It's when I say things like:

"Do you think that we're all little bugs sitting on leaves and grass and that there's are giants out there that control the weather and natural disasters and when they step on us, it causes things like tsunamis and earthquakes?"

"I love all kinds of shopping, even grocery shopping" 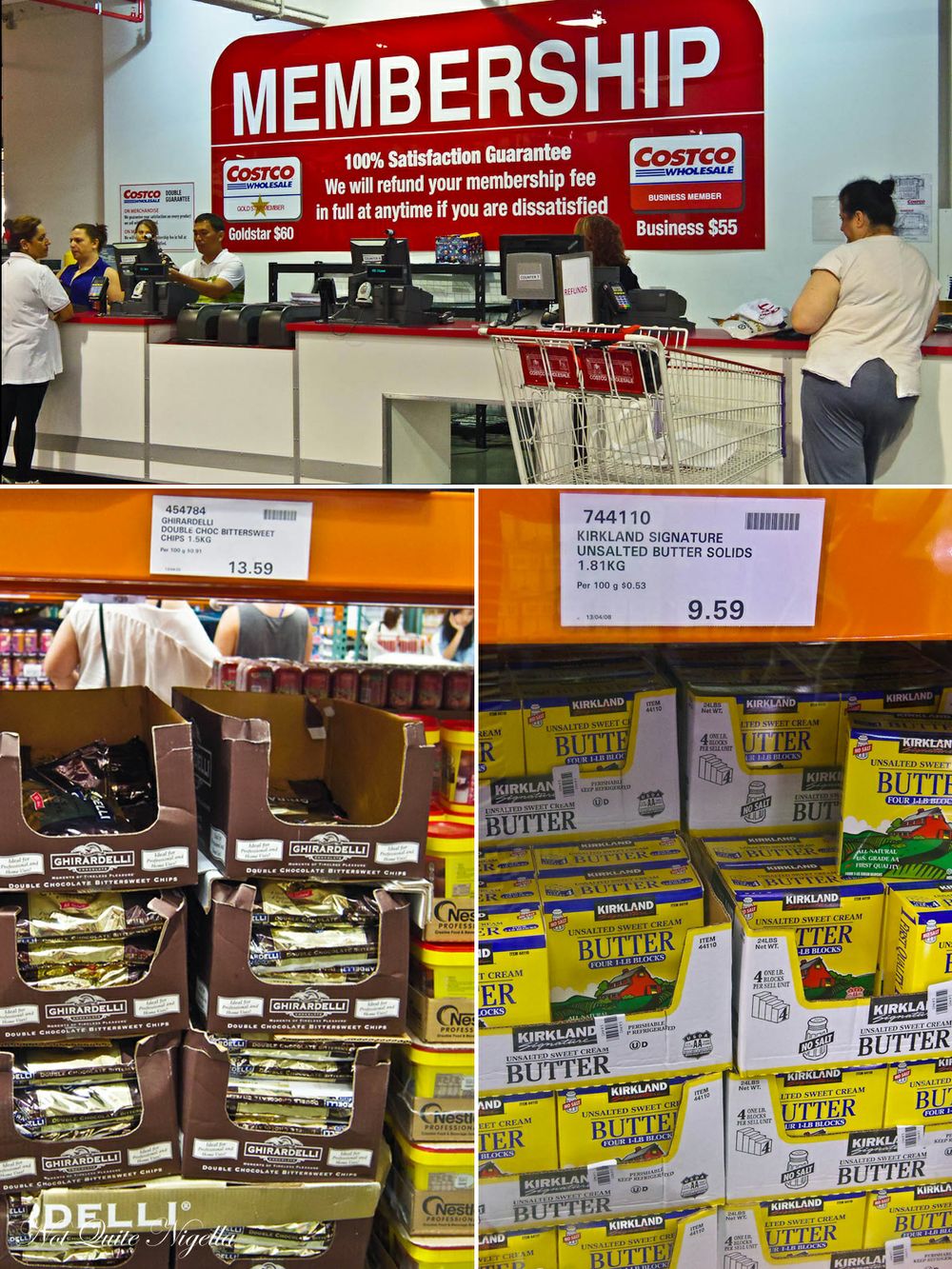 Both statements are absolutely true and I recall when Costco first opened up in Sydney. I was so curious about it. There were whispers of designer bags and American snack foods-a friend even swore that she saw a Louis Vuitton bag there. We even drove there one Sunday afternoon and saw the queue visible from the street and Mr NQN refused to go any further (Mr NQN's other name is "he who does not enjoy grocery shopping") so we turned around and went home. 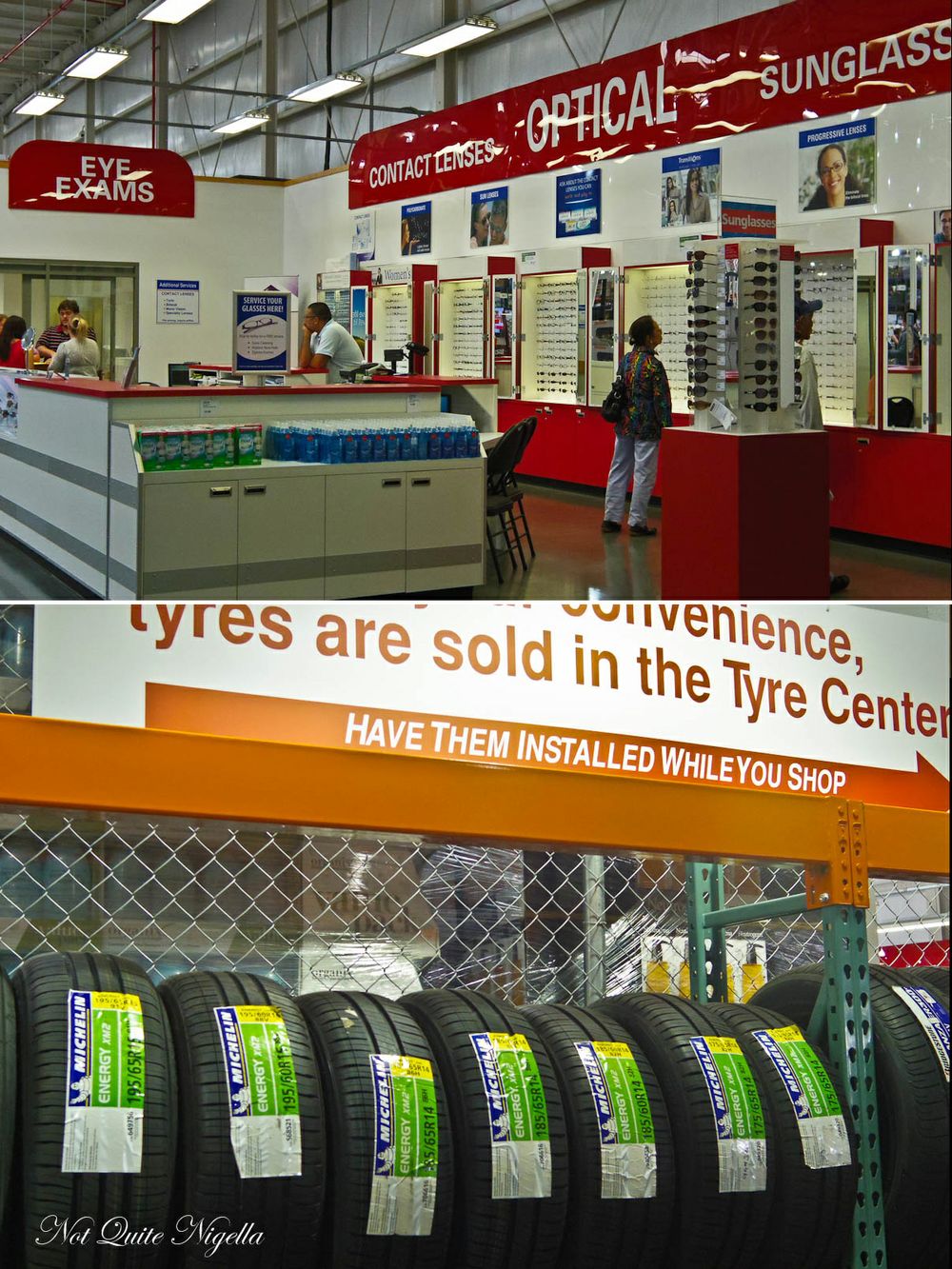 This was over a year ago and it wasn't until I saw my friend Celia's post where she photographed some Longchamp Le Pliage bags that I decided I had to pay them a visit. Except of course Costco is a different kind of beast than your regular sort of store. Celia informed me that you couldn't even look into Costco unless you were a member. Unlike overseas where membership is restricted (in the U.K. only people working in certain types of professions are allowed to buy a card) $60 gets you a membership here ($55 if you are a registered business) and only then are you allowed to browse the aisles. If you pay using a credit card, the name must match the name on the membership card. 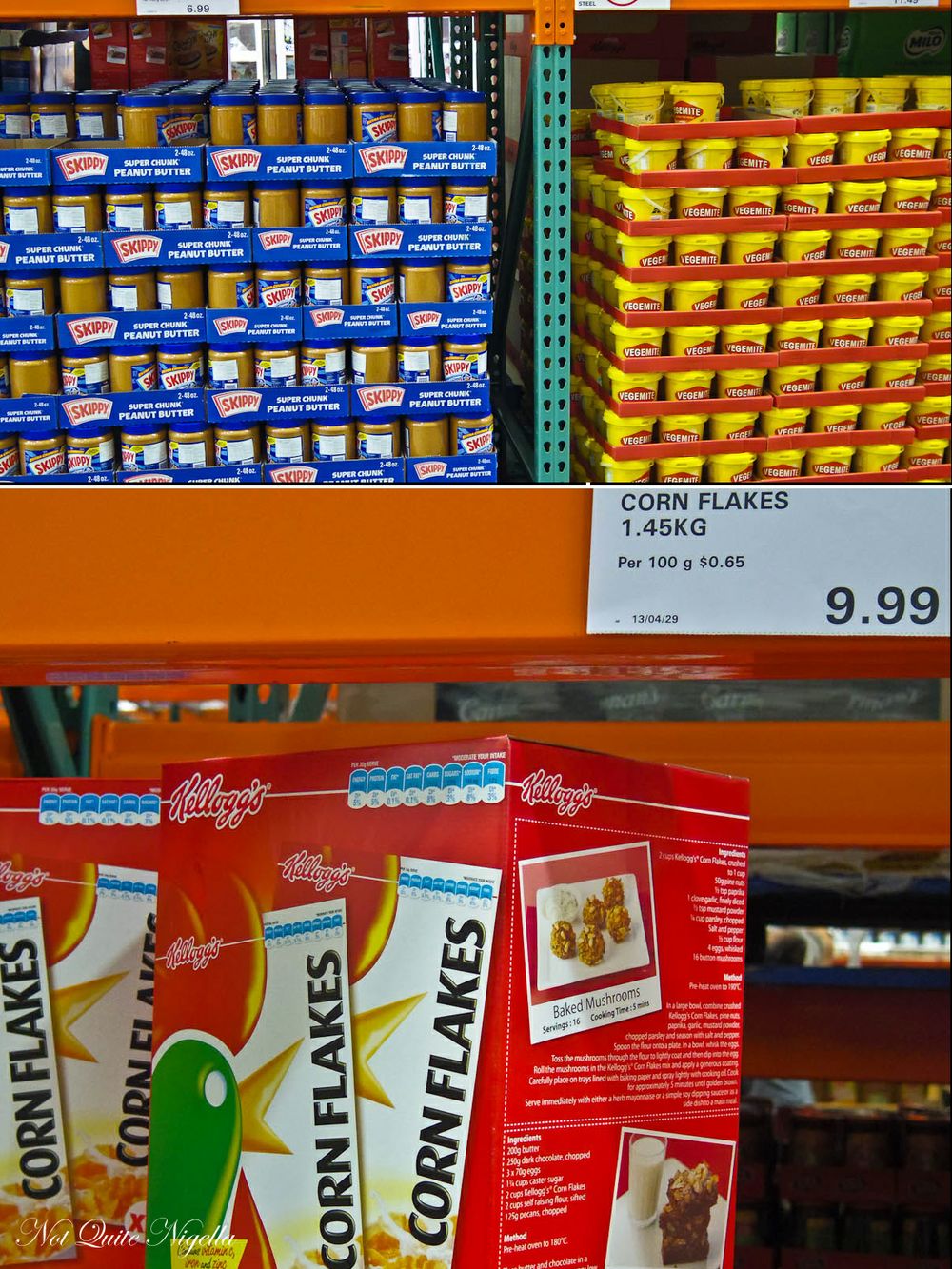 So one Monday morning I joined Celia and Pete on one of their runs to Costco. Enormous as expected with a total of about 400 staff, it's a sight to behold and a testament to American style grocery shopping. They didn't seem to mind people taking photos and if you want to price match, you could certainly do so if you have the internet on your phone. The savings varied from brand to brand and the first thing we saw is the optical section and the hearing aid section. Celia wrote of a story of a Cook Islands couple who had taken a taxi from Sydney airport and had a hearing aid fitted and purchased for $2,000 because they were quoted $12,000 for the same thing in the Cook Islands. 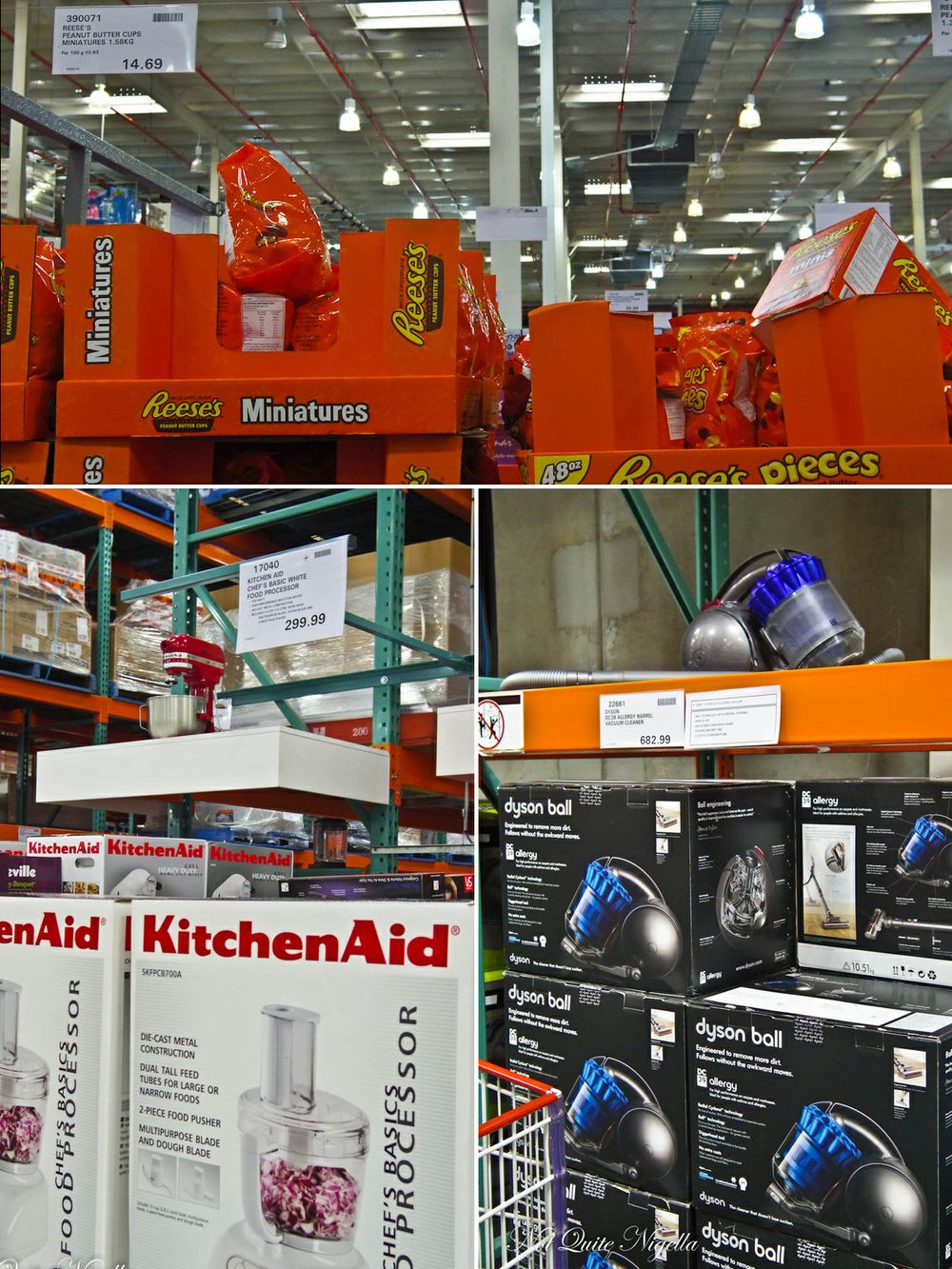 Costco differs from a store like Aldi in that they have branded items, all of which are brand new and not end of the line items. There is also their own home brand called Kirkland. There are plenty of American snack foods and drinks. Everything comes in larger sizes and if you know your prices, you could end up with a good bargain although my friend Gina visited and found that some items were the same price or even more depending on where you shopped. The Dyson vacuum cleaner was cheaper than the retail price of other stores although with some research you can find stores that sell it for cheaper or allow for bargaining. 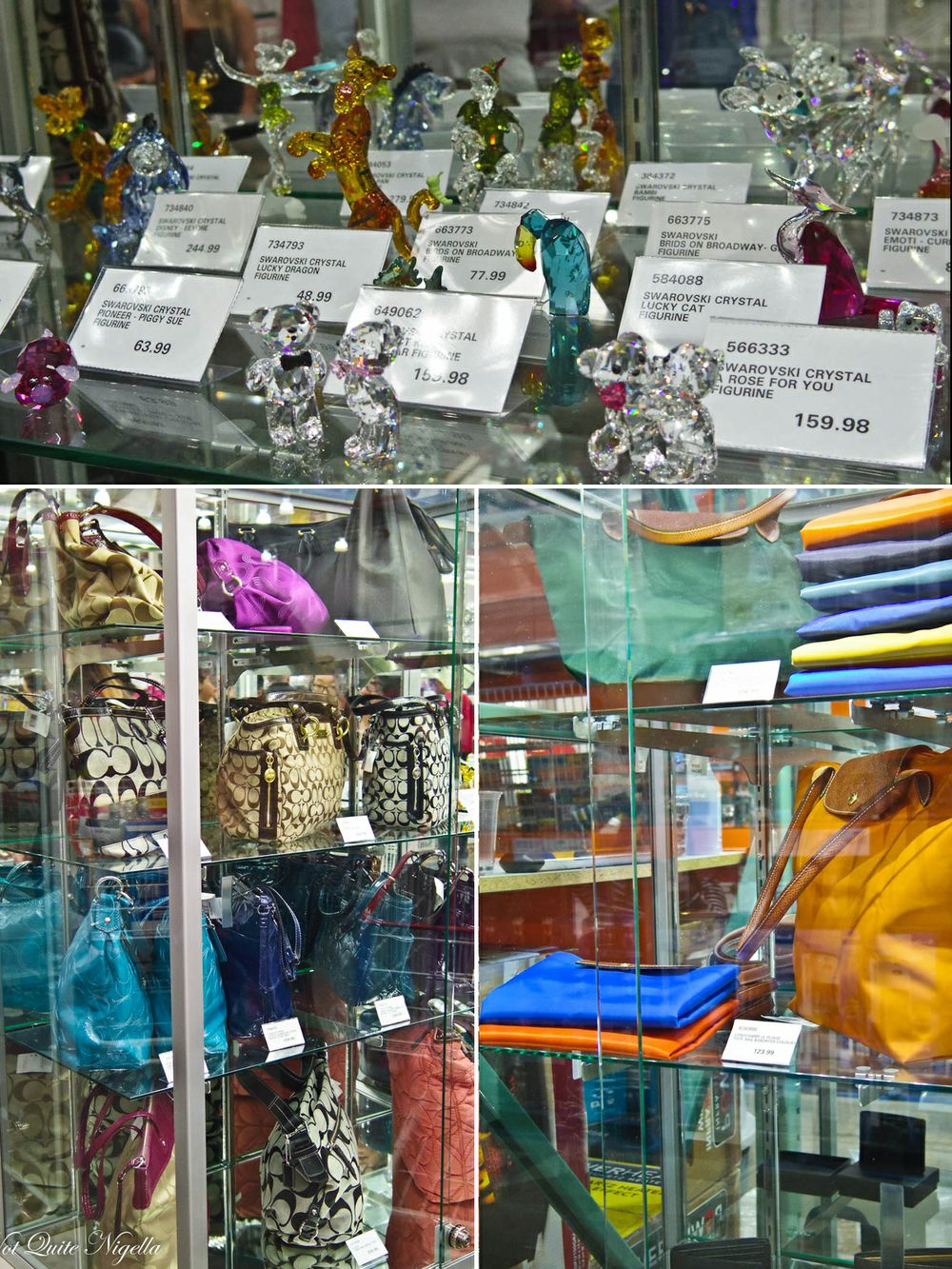 We went straight to the designer bags and two friendly staff members offer to help and chat to us. They seem unperturbed by me taking photos (I took my tiny Pentax Q instead of the huge DSLR as it was lighter) and the female staff member clarifies that they often get just a few of each bag style. The Longchamp Le Pliage bags are $123 (I bought the same bag at a department store for $139) although the selection is smaller. Nearby at the Swarovski glass display cabinet, she tells us that they get items that buyers tell them the actual Swarovski boutique doesn't have. 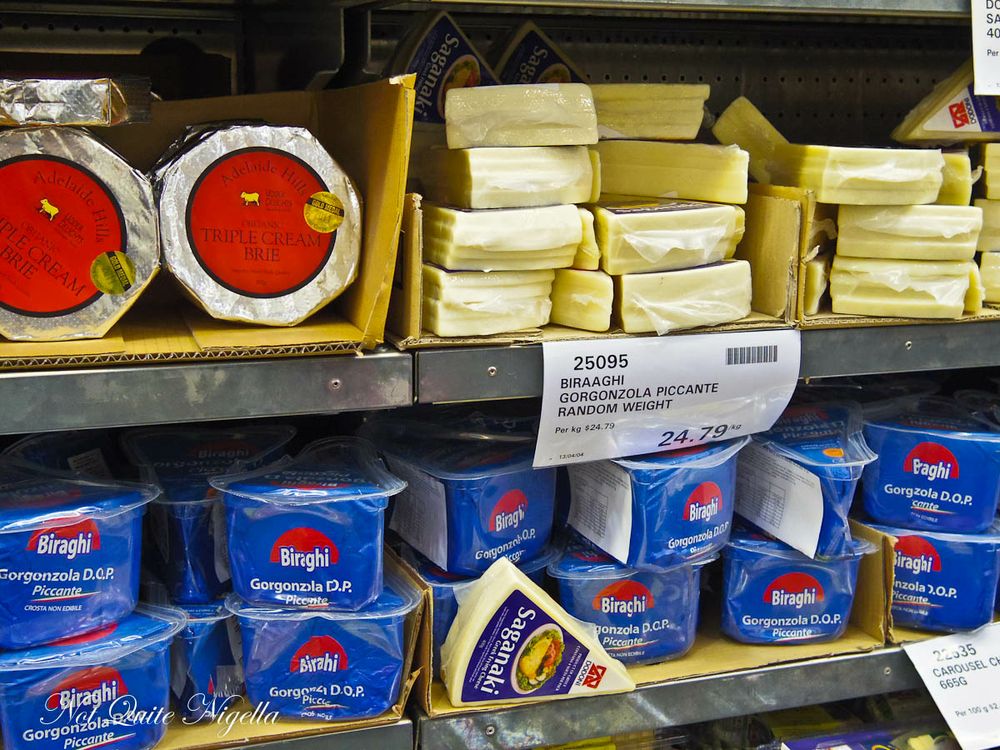 We made our way up and down the aisles looking at luggage, kitchenware and knives. You would need at least two hours if you wanted to go into every aisle. As we were short on time we skipped straight to the food section. The fresh produce section had plenty of pre-made goodies including an enormous stack of crepes for $4.95 and a container of cocktail blinis. The best bargains were found at the cheese fridge with D.O.P. gorgonzola for $24.99 a kilo, a D.O.P. Tallegio for $27.29 a kilo and a 500g wheel of Udder Delights Triple Cream brie for $11.89 that I bought for our upcoming mother's day picnic. 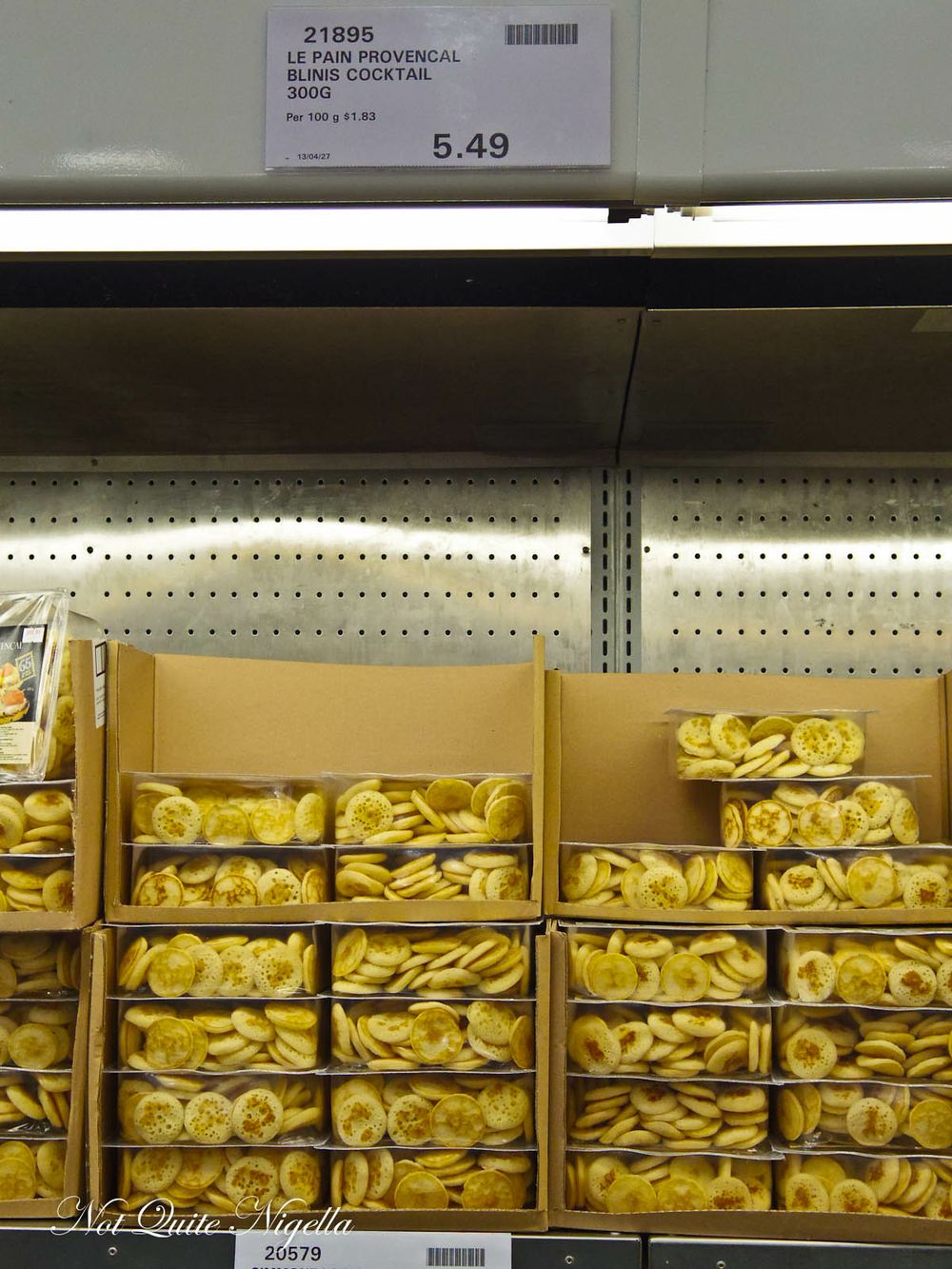 I've got a bit of a chicken sandwich thing-I think it's a throwback to my childhood and a chicken, mayo and lettuce sandwich on white bread is a comfort food for me so I picked up a 750g container of "Tender Feast" free range chicken breast pieces mixed with mayonnaise and herbs for $13.59 as a quick sandwich filler. Another bargain was frozen berries for between $6.29-$6.89 a kilo. 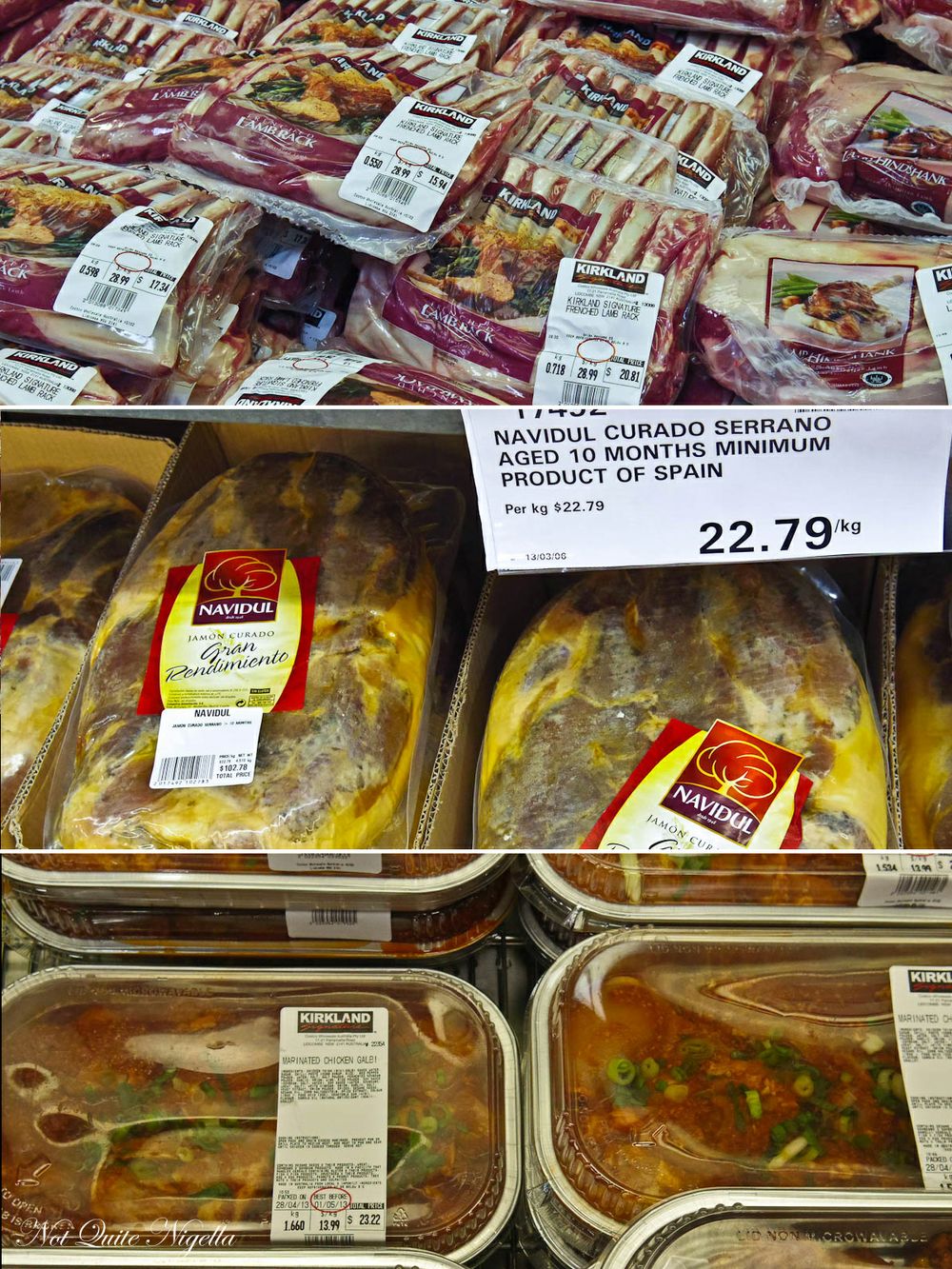 There was a good range of charcuterie and jamon at reasonable prices and Celia particularly likes the fresh fish section. Some were packed yesterday and some today and there's a range of crab, lobster, oysters and whole salmon at $14.99 a kilo. 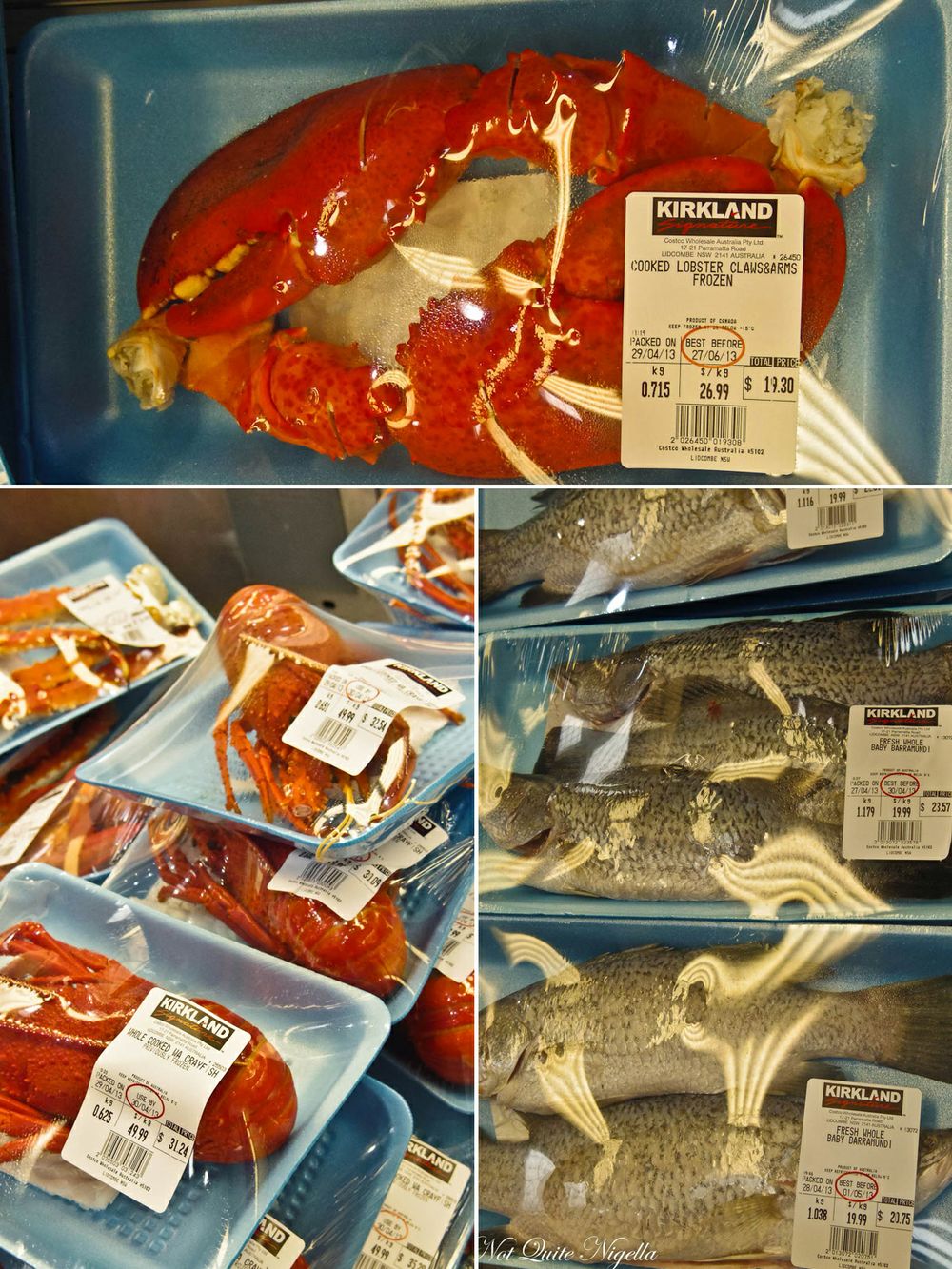 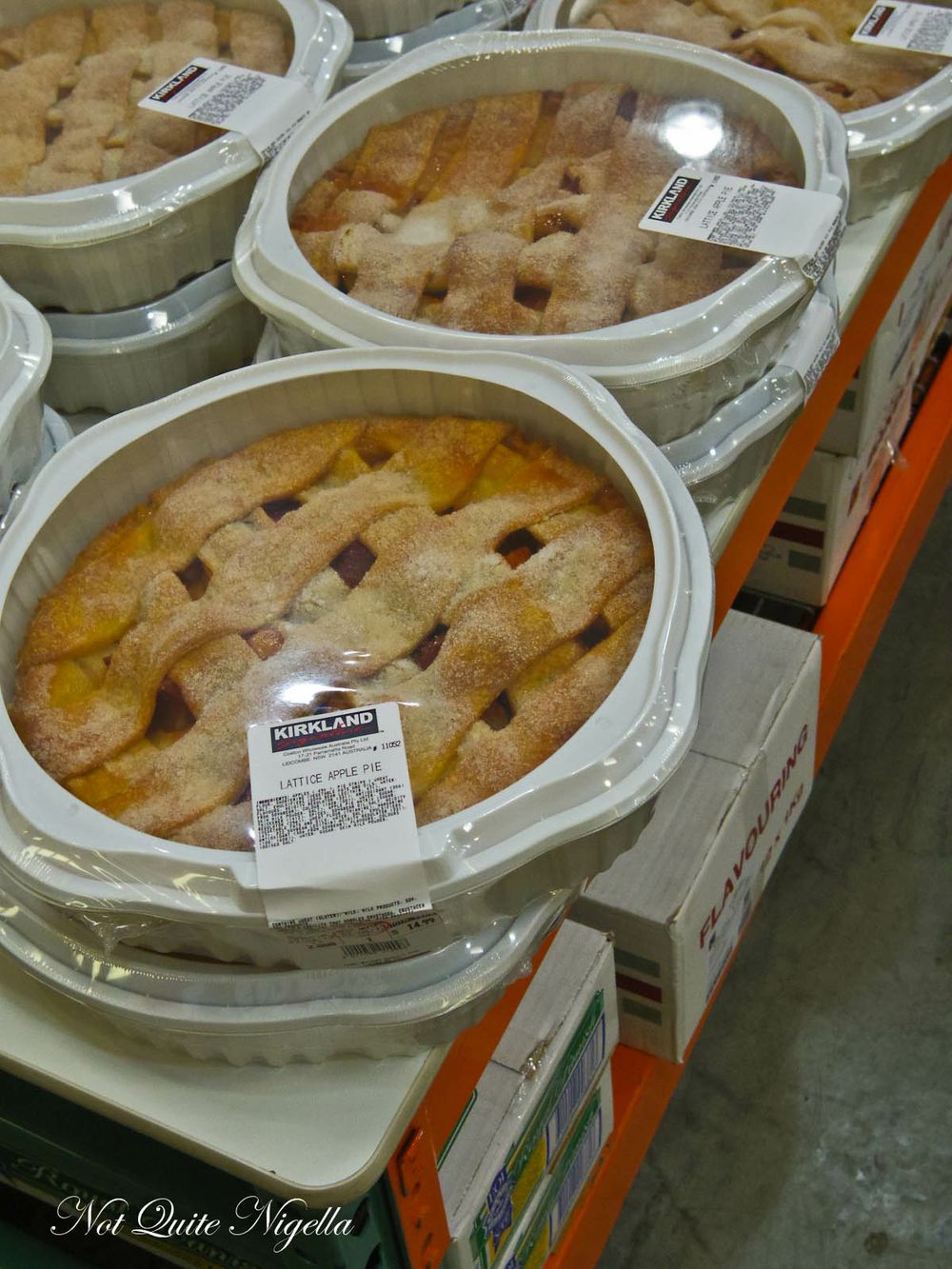 Pete pointed me to the section of baked goods and this was where enormous slabs of cakes (custom made messages can be ordered) and enormous giant sized lattice apple pies are sold. The pure maple syrup looked to be a good buy at $15.99 for a one litre bottle although this is their own house brand Kirkland. Large bags of bakers flour are a steal at $9.99 for a 12.5 kilo bag. 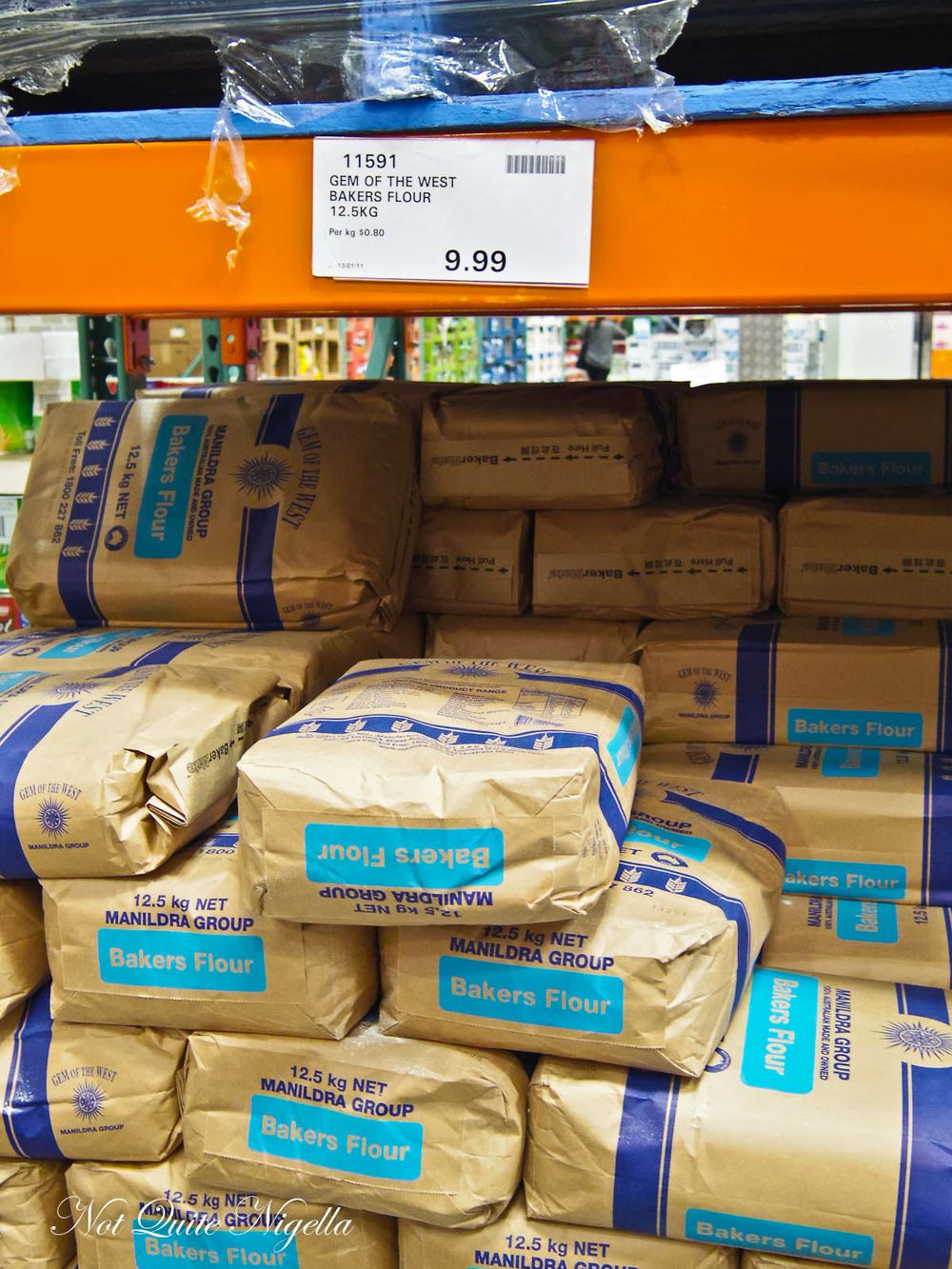 Running out of time we only had a quick look at the fruit and vegetable section but I usually buy my produce from markets and Celia had mentioned that the deals weren't particularly good there although Pete noted that the apples were individually wrapped and of better quality than other places. Interestingly, the only garlic I could find was Spanish garlic. A kilo box of medley tomatoes were $15.99 which isn't inexpensive. 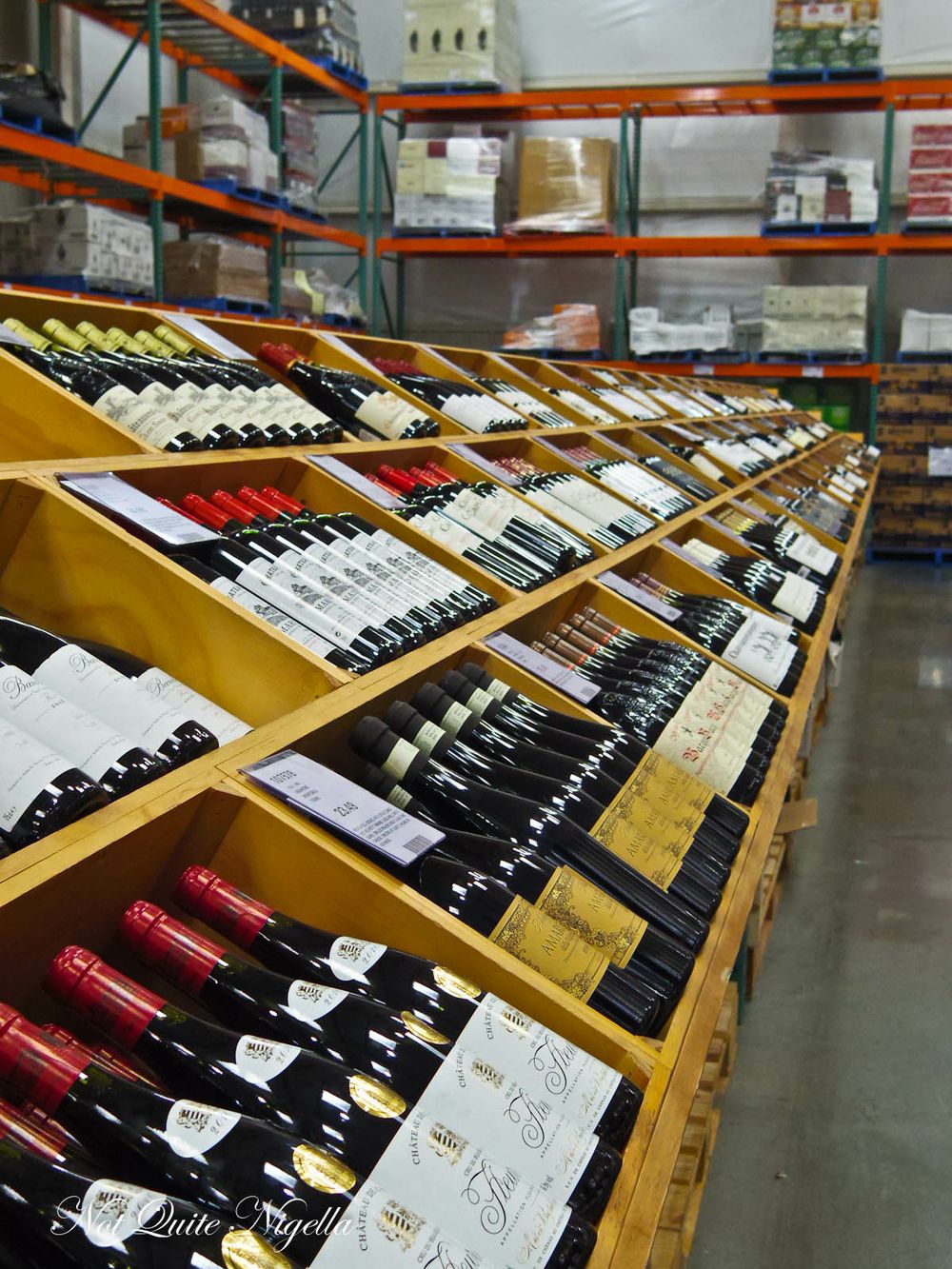 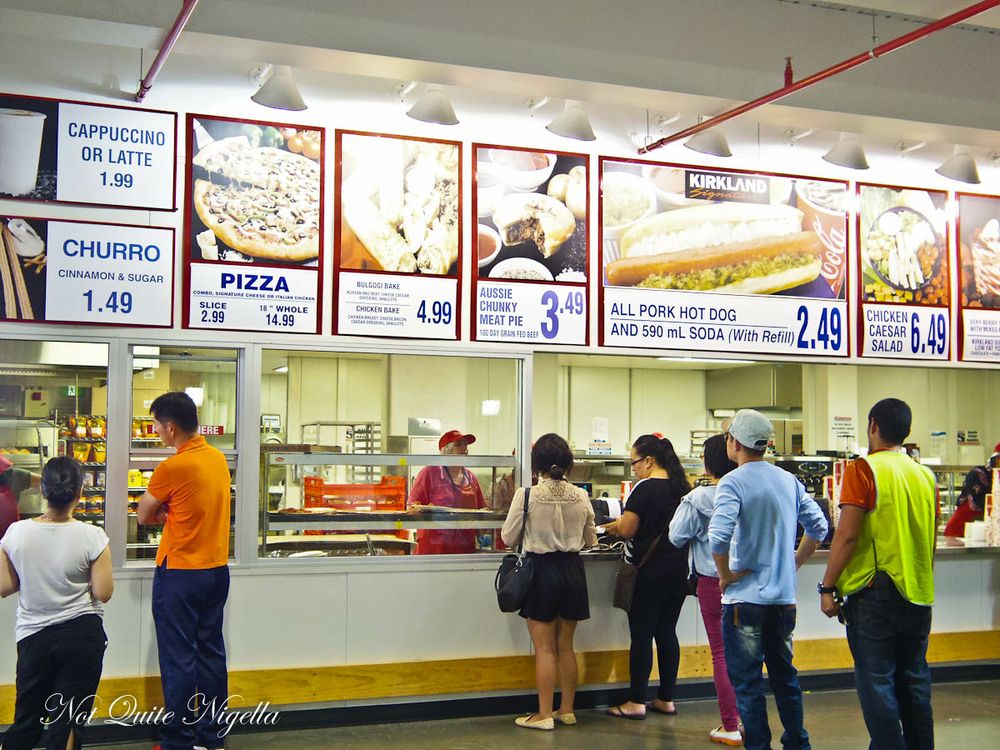 After going through the checkout, we showed the security people our receipts and they checked it against what was in the trolley. It was around lunchtime and Celia and I took a quick look at the takeaway food kiosk outside the store. We bought the bulgogi wrap as well as a chicken and cheese wrap. Both were $5 and came out steaming hot with a come hither smell that made my tummy protest at having to wait so long. It smelled almost deep fried but the outer was a layer of blistered foccacia or pizza dough with a good amount of filling inside. We split them and both adored the bulgogi wrap which was filled with plenty of marinated beef. The chicken and cheese wrap paled in comparison and tasted mostly of a cheesy white sauce and I left that behind. 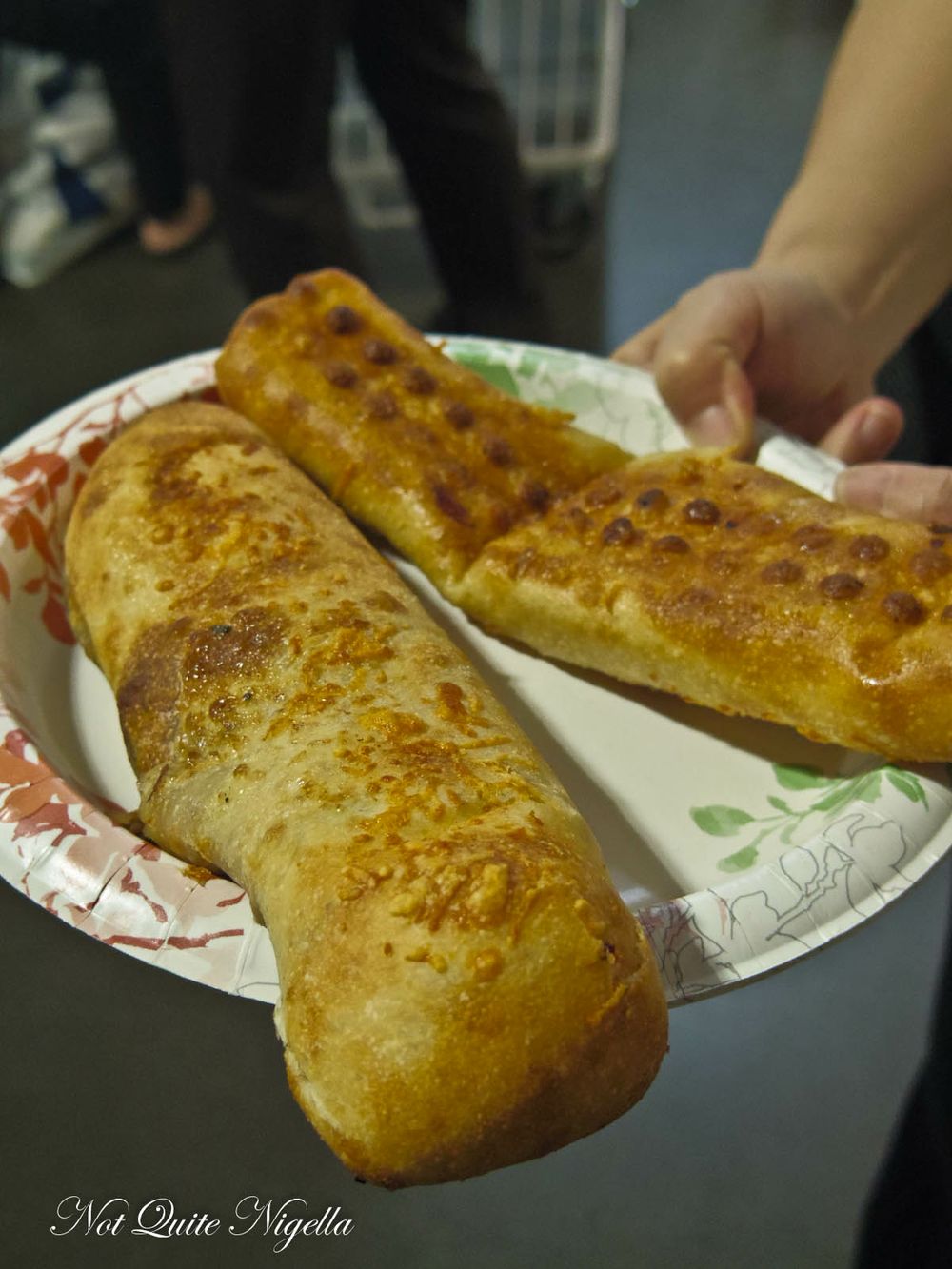 Bulgogi wrap and chicken and cheese wrap $5 each

So what did I think of the items that I bought? The chicken with mayonnaise mixture quite honestly left me quite unimpressed. It was a quite salty and needed something extra like a mustard or more herbs to flavour it up although on the plus side it was made using free range chicken. Celia found that her taramasalata was just okay and she preferred making her own. I'm giving the giant 822gram canister of Almond Roca ($11.29) to my mum and I'm sure that she'll like that. I think that if I were to go again, I'd stick to the brands that I know and love and buy basics that I can use to make things from scratch. however Celia who is by now a veteran of Costco has found that their house brand champagne and margarita mix were good and her advice is that you need to go a few times as bargains can be had as long as you compare the products. 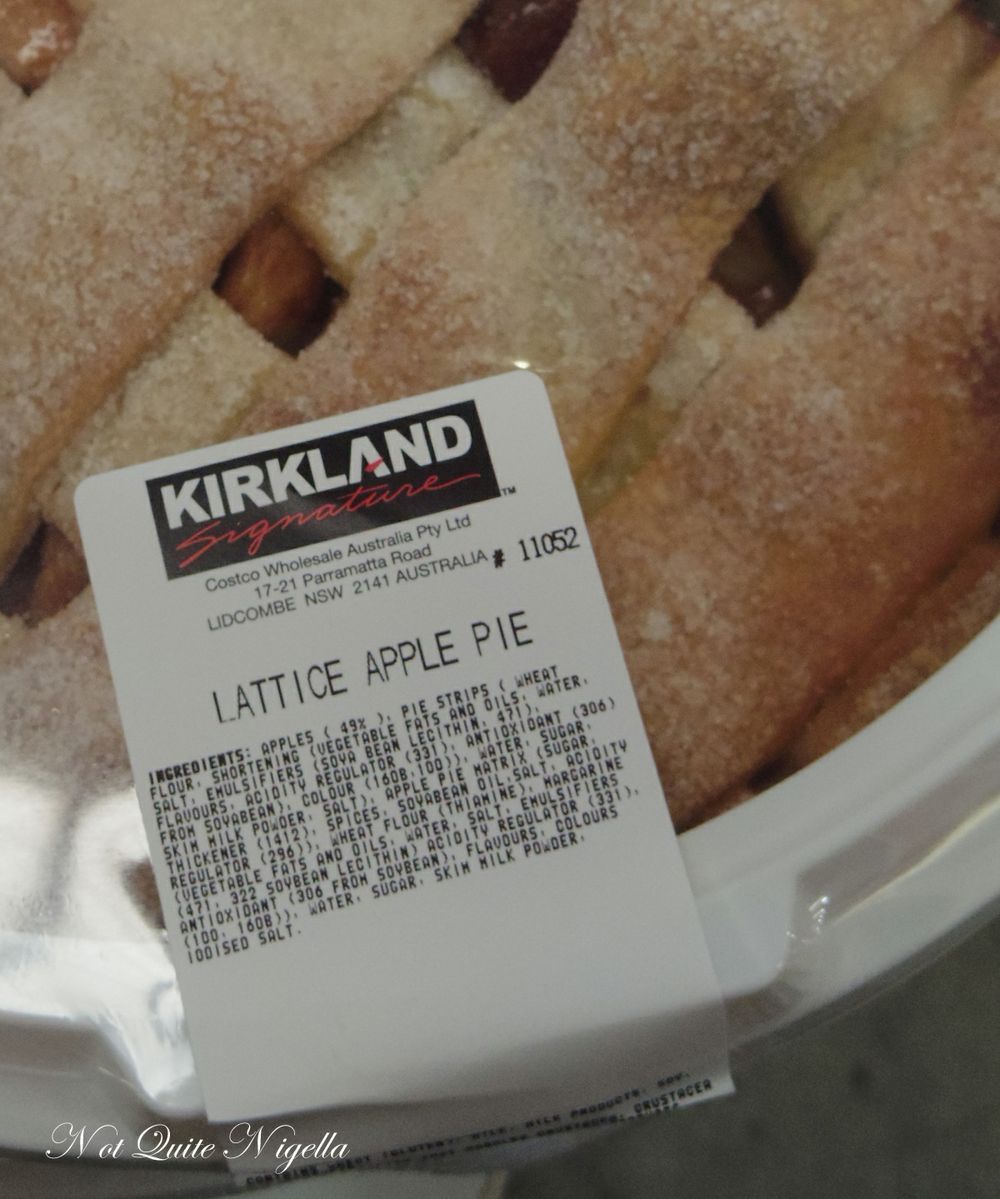 It can be a bit of a risk since you are buying larger quantities than usual so I don't think I'd buy any of the home branded items unless I knew from friends or readers that they were better. Also some of the baked goods and pre-prepared items had an alarming amount of numbers and letters in them (including one called "apple pie matrix"!). The label for the apple pie contains a lot more ingredients than you would if you were making it at home in part to help it last longer. 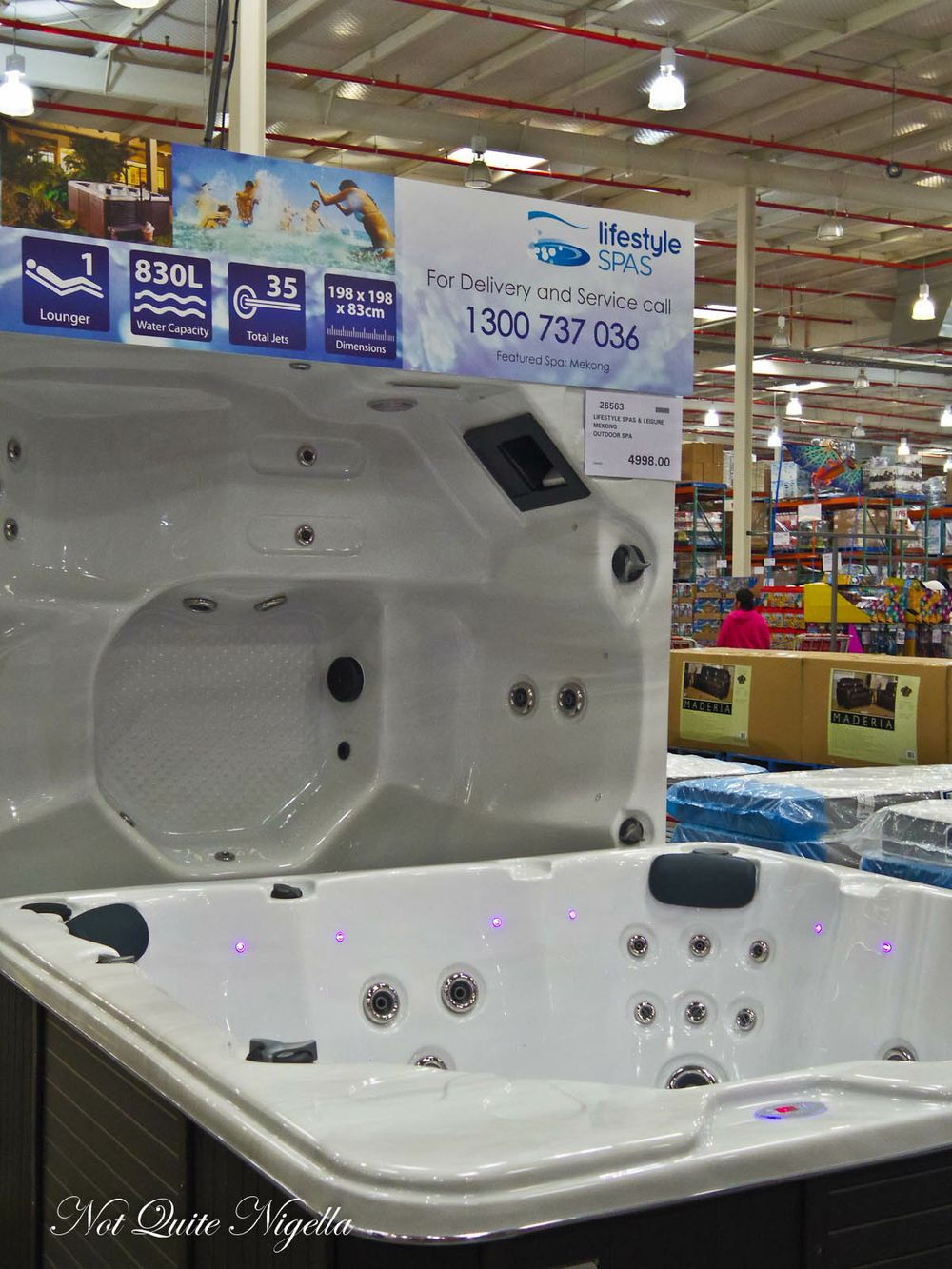 We resisted buying the spa bath though!