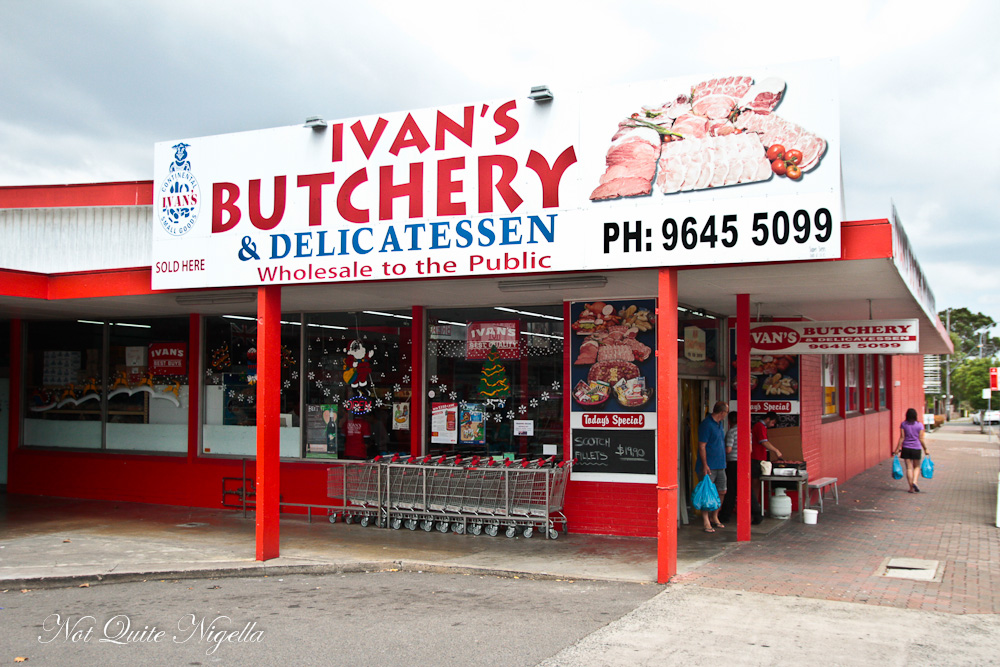 Our brother in law Laporello spreads him arms wide, inhales deeply at the aroma of sizzling chevapi outside Ivan's Butchery on Waldron Road in Chester Hill and grins proudly. "Welcome!" he says. 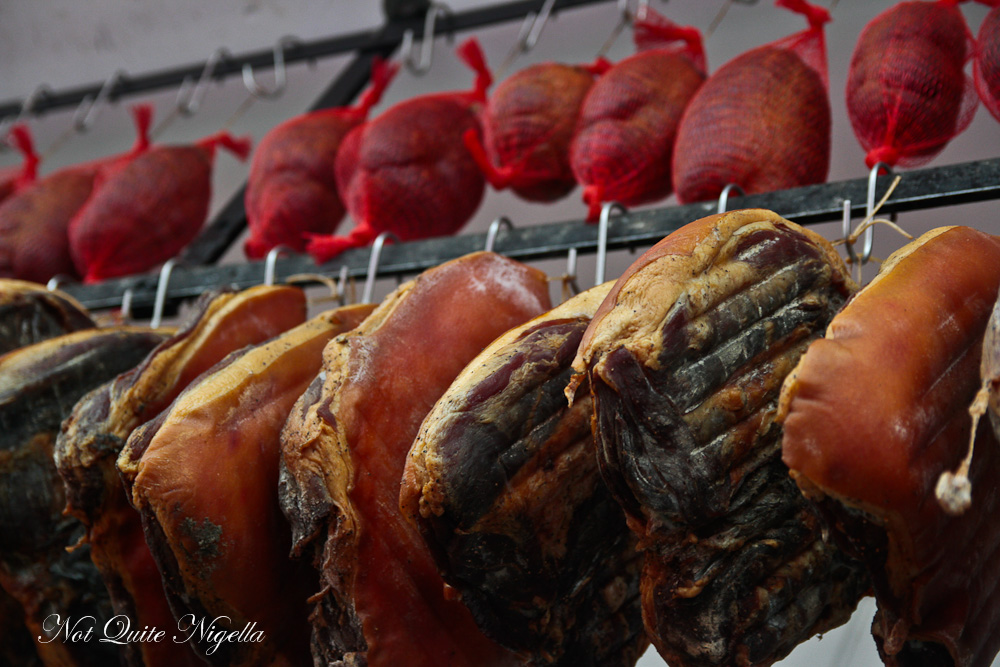 A visit to Ivan's with Croatian born Laporello has been on the cards for a few months now. In fact ever since we dropped in to their apartment to see the newest addition to the Elliott family and he served us a selection of smallgoods and cured meats from there. I chewed on "pork candy" and ate a divine open sandwich spread with ajvar red pepper spread, topped with a range of meats layered on top of each other. 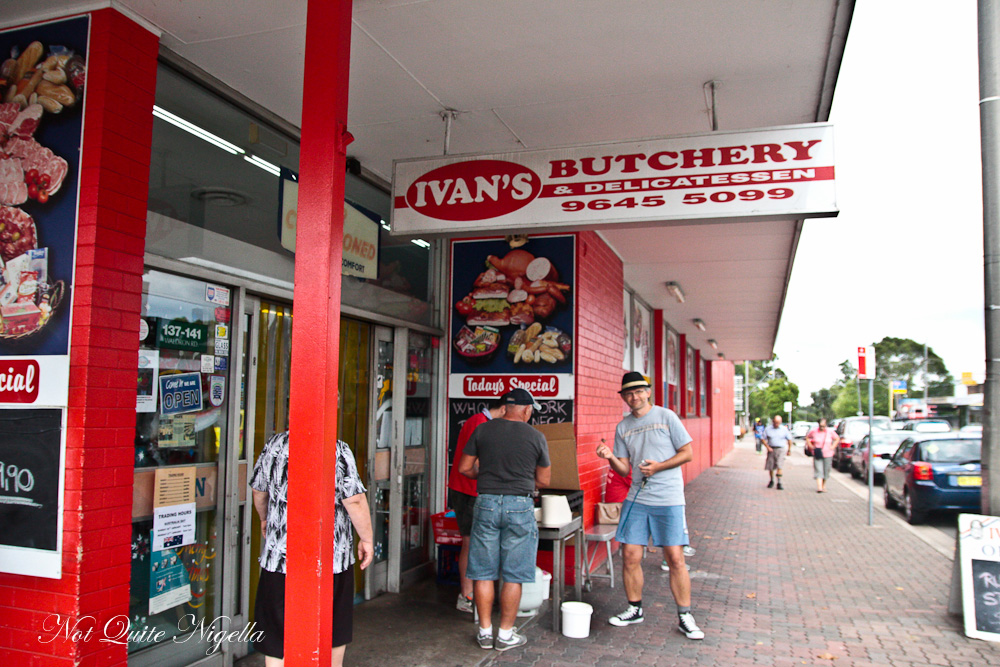 The Croatian butchery is enormous and the front of the store stocks all range of supermarket items from Croatia, Serbia, Hungary and Poland. We have parked in their customer carpark and sampled some chevapi before grabbing a trolley to buy meat. "I spend at least $100 on meat when I come here" Laporello confides. 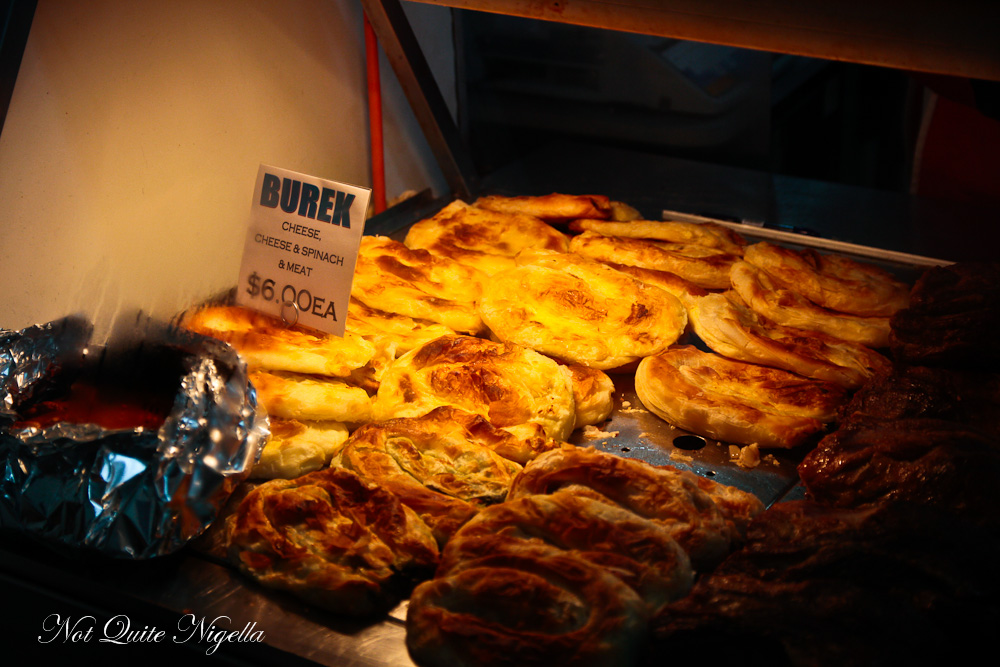 The first stop is the left hand side of the meat counter where Laporello buys a cheese and a meat burek. His favourite is the meat, made with beef and onions while the milder flavoured cheese one is more to satisfy our curiosity. There's also freshly roasted pork available. 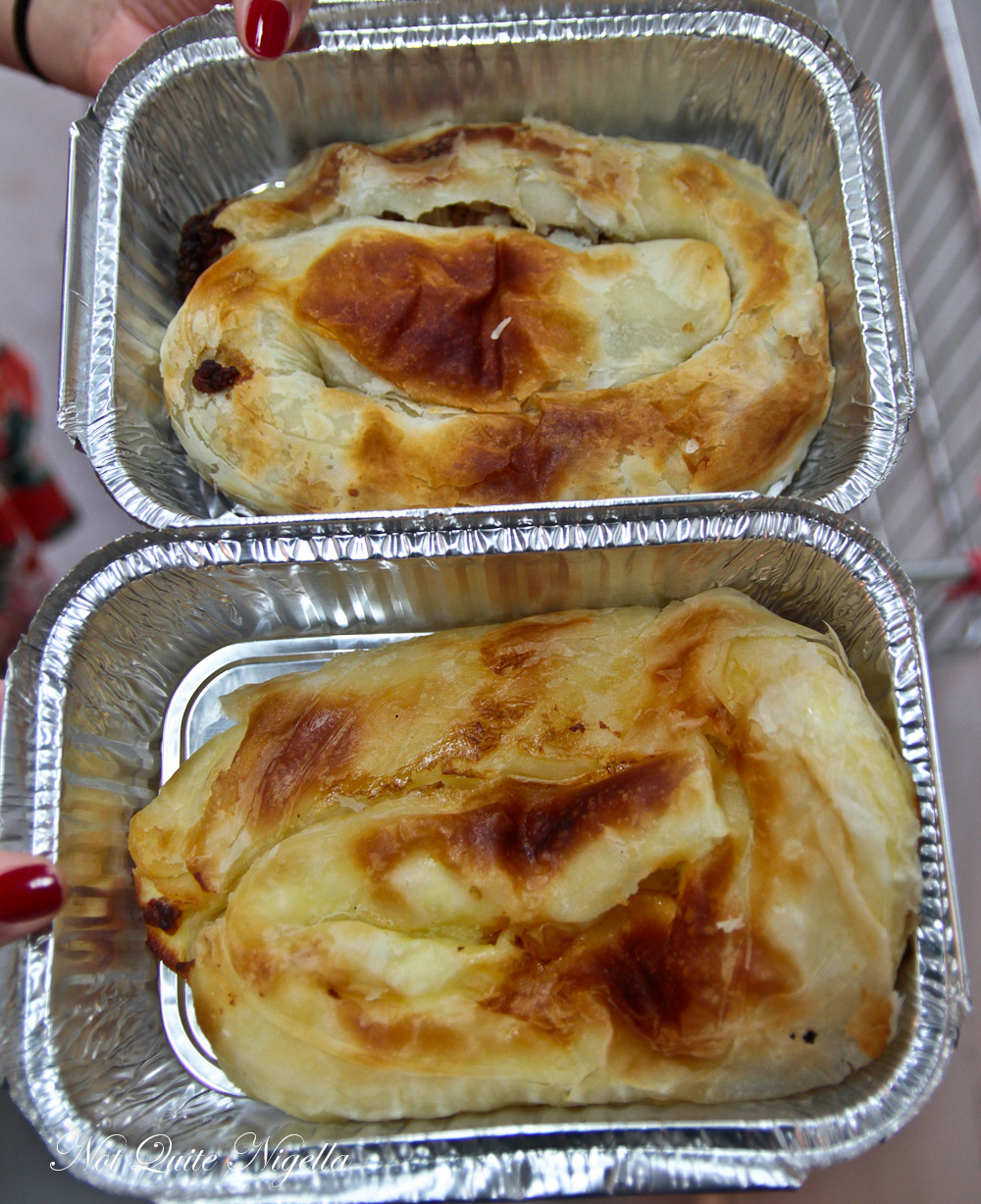 He speaks fast and rhythmic Croatian to the sales assistant who asks if he would like a roasted pig's head. They're just $5 for one, two for $7.50 or 3 for $10. If we weren't going out for the next two nights I would have been in the queue behind him. Laporello buys one as a possible gift for French friends who have just become Australian citizens. He later tells us that he ate it himself and that it was delicious. 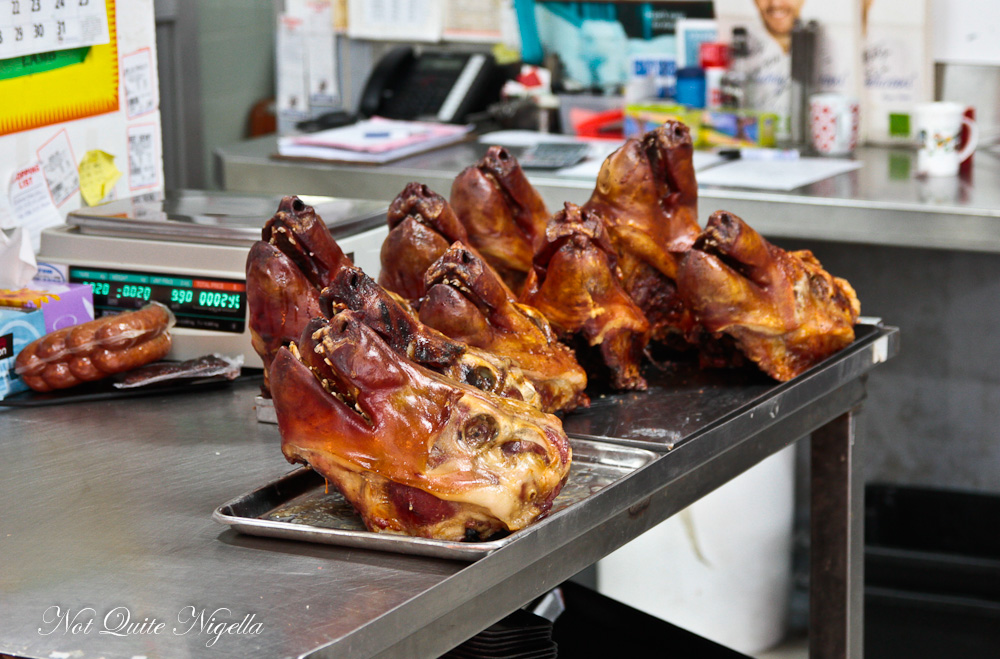 We continue on to the other side of the display. In the centre are your usual fresh cuts of meat and the clientele which is a real mix come for the very reasonable prices. We head towards the right hand side with a range of cured sausages and meats. 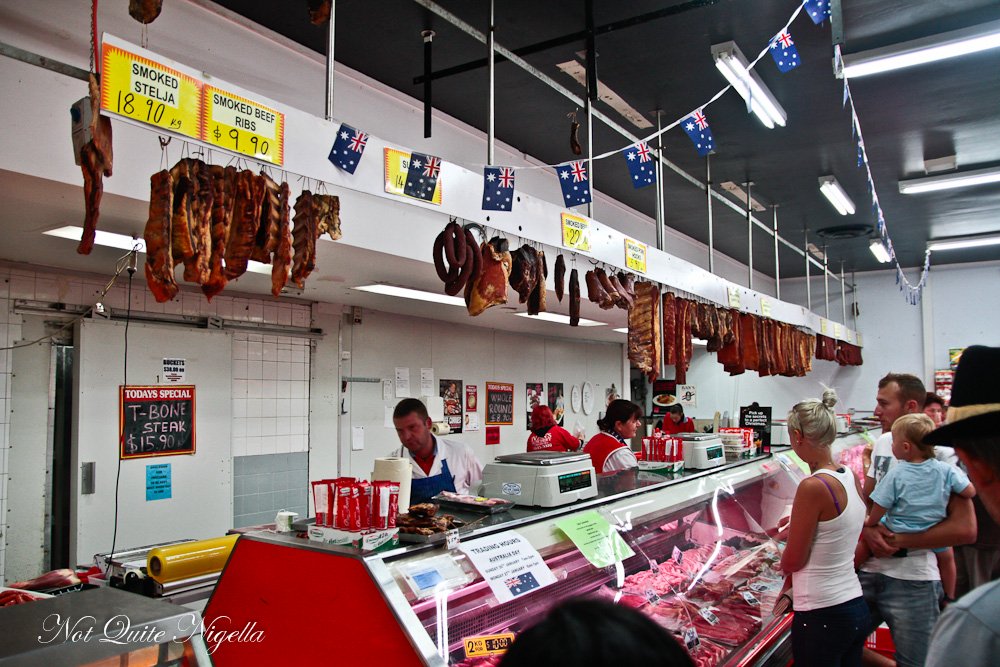 Laporello points at the hot Kulin. Everything can be sampled and he finds that the taste of the kulin is different with every visit. He prefers a dark, vivid red which means that he kulin (or kulen) has a good amount of paprika. The sausage itself has a dry texture as low fat meat is used but today's doesn't pass his test and he turns to other smallgoods. 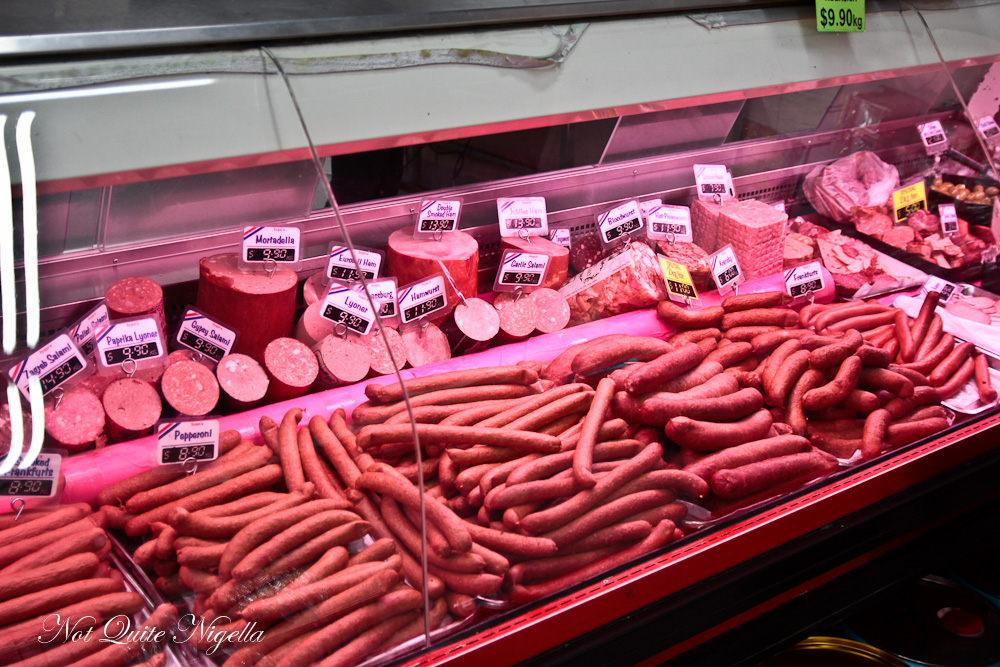 The Domace and Chabai dried sausages hang above and he asks for a taste of the hot ones. These too differ according to how long they've been hanging and he orders some of the more wrinkled and slightly smaller sausages as they've been hanging for longer, their flavour concentrated and the texture drier. 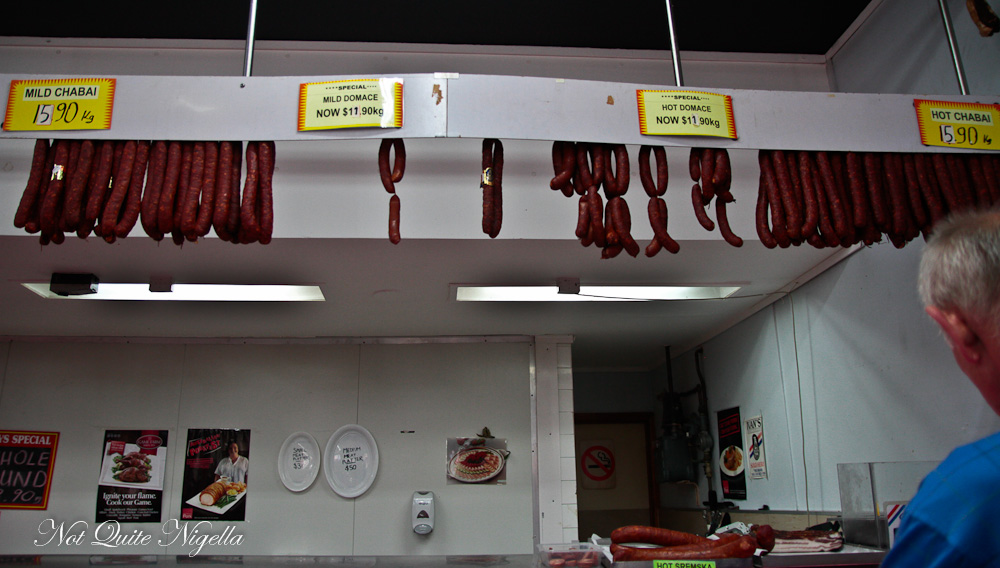 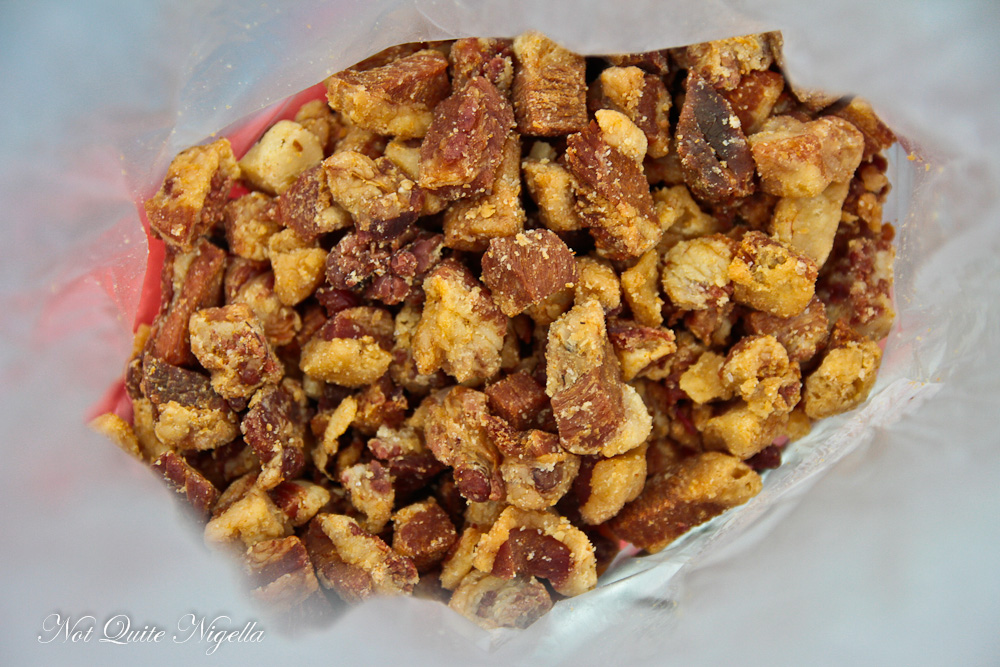 The pork candy or pork crackling cubes are just above the counter and he buys half a kilo of these addictive little bites. I refrain because I know that once I start, I can't stop. He brings these to work to snack on during the day. 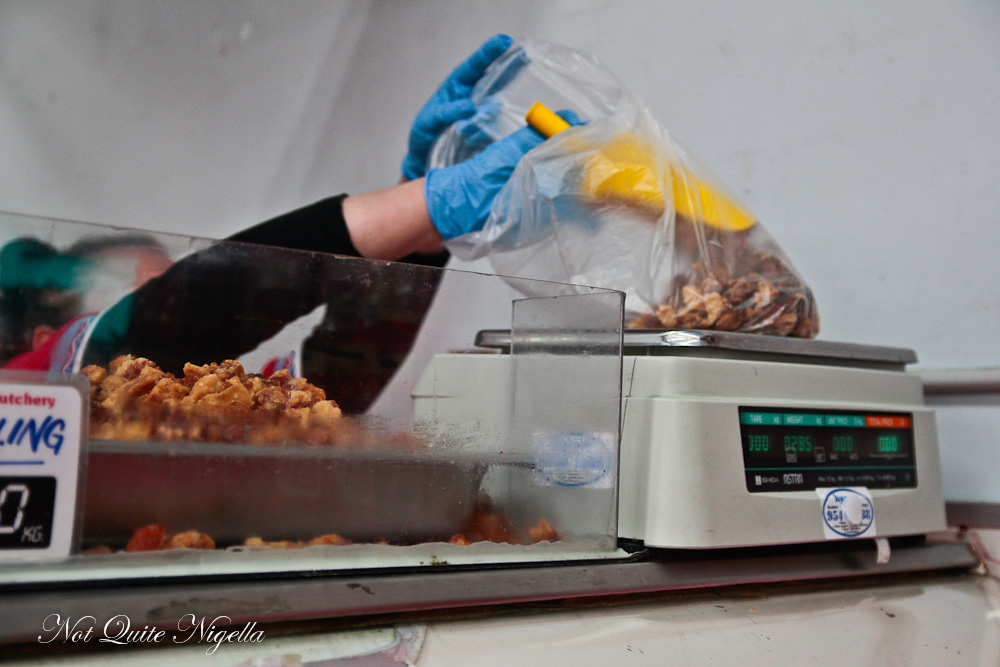 He buys a kilo of Presswurst, one of his favourite items made with a variety of cuts of pork meat suspended in aspic. I buy 250g or half a pound as I recall this being very good. The last purchase is for the hungry and curious (like us) and one of Laporello's regular purchases: a 2 kilo bag of mixed smallgoods. Sometimes they're the ends of a sausage, other times they're just pieces of sausage. And the cost for 2 kilos of sausage? Just $5 total. 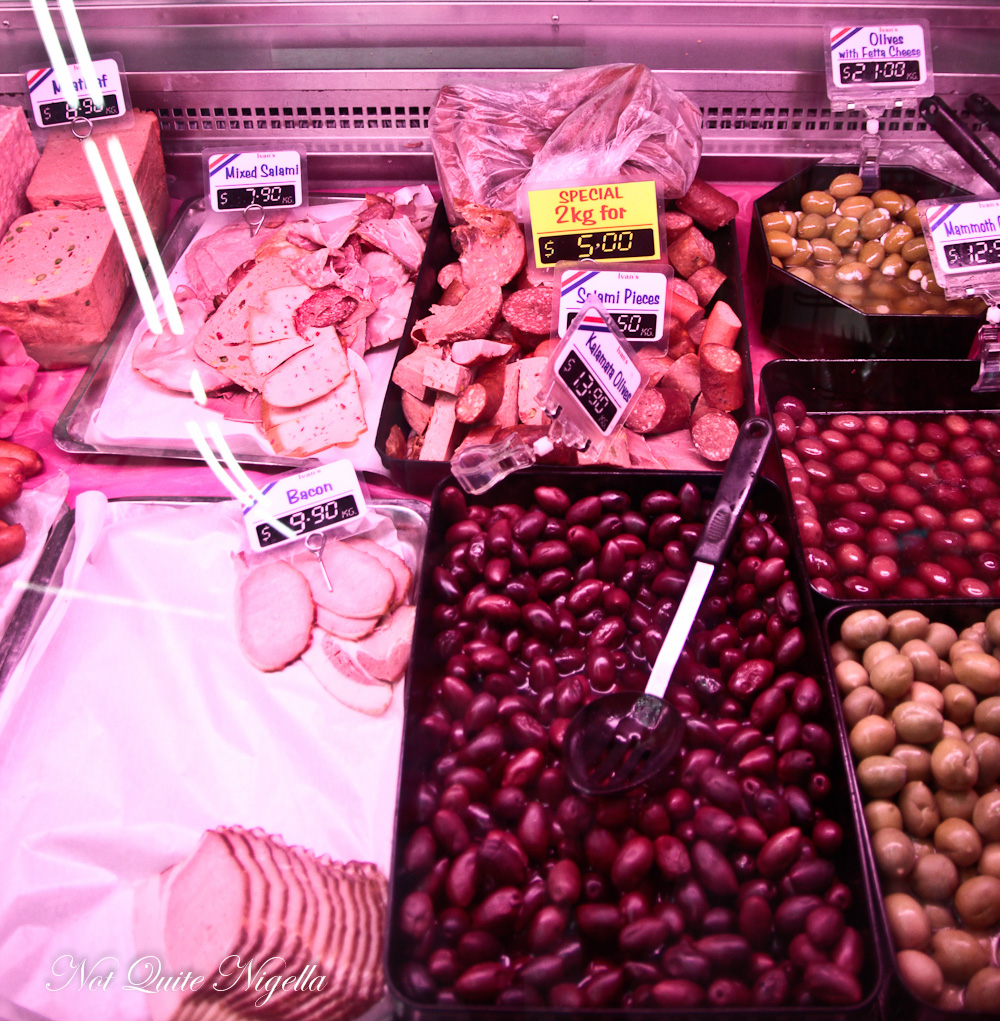 We walk around the store a bit more and I happily put two jars of ajvar (promounced ay-var)into the trolley. I adore this red pepper spread made with roasted red peppers, eggplant, oil, salt and pepper and eat it spread on sandwiches and in salads. There are tubes of goulash paste and pates on the shelves. 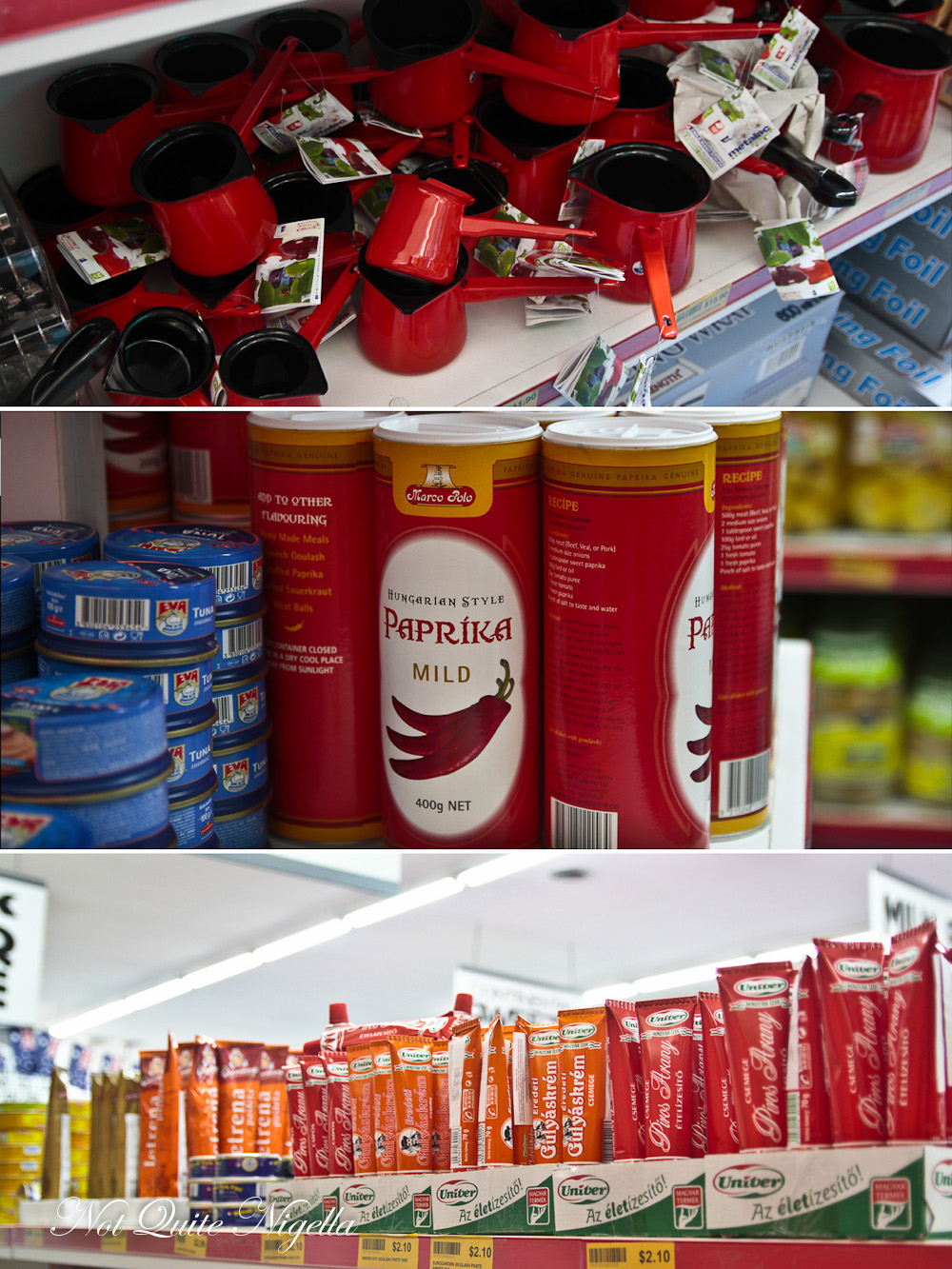 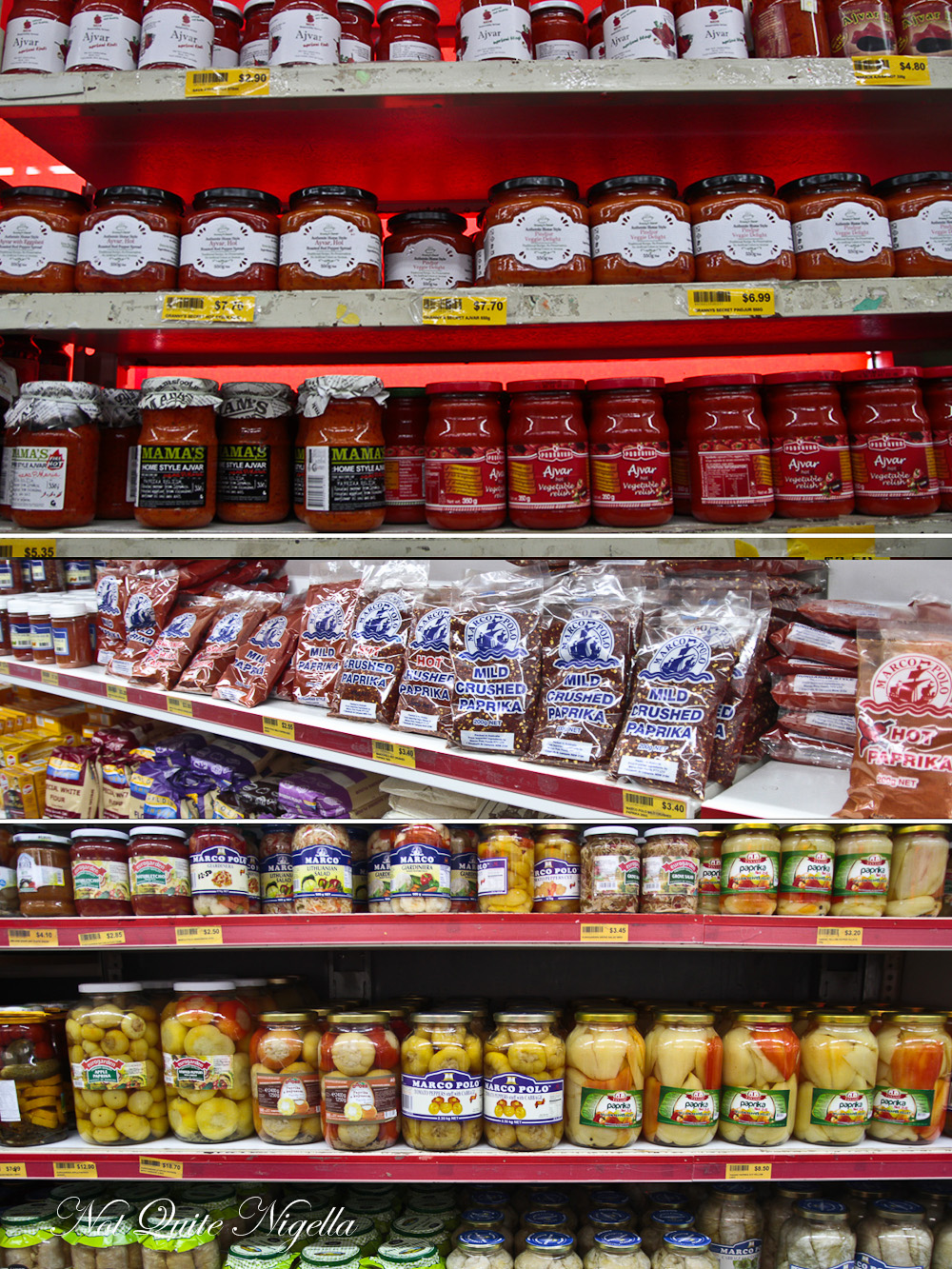 Laporello points at the pickles which he recommends having with the cured meats to bring out their flavour. "Is that slatko?" he says pointing at a beautifully packaged range of whole fruit in syrup. I can't resist the black cherry version and pop one into the trolley (and incidentally, it is about half the price here than it is in other stores). 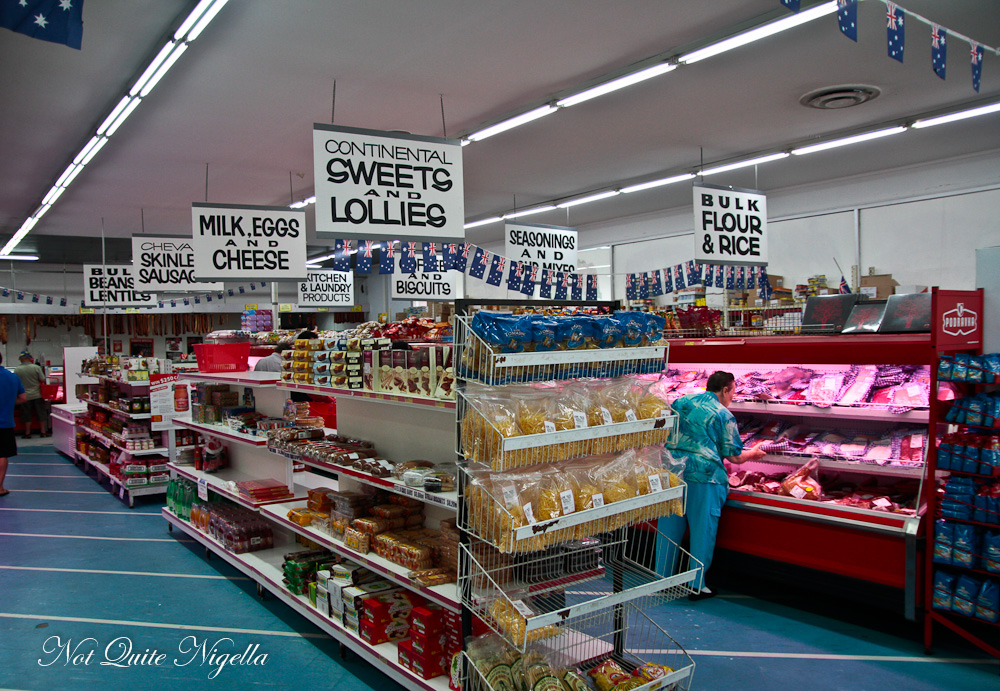 The fridge holds prepackaged sausages from black and white puddings, prosciutto, Polish clobasi, weisswurst, slavonska, kulin among many others. Leg hams are a steal and still have months to go and many items are generously marked down. Among the bargains are things like whole pickled cabbages and smoked pig's ears. 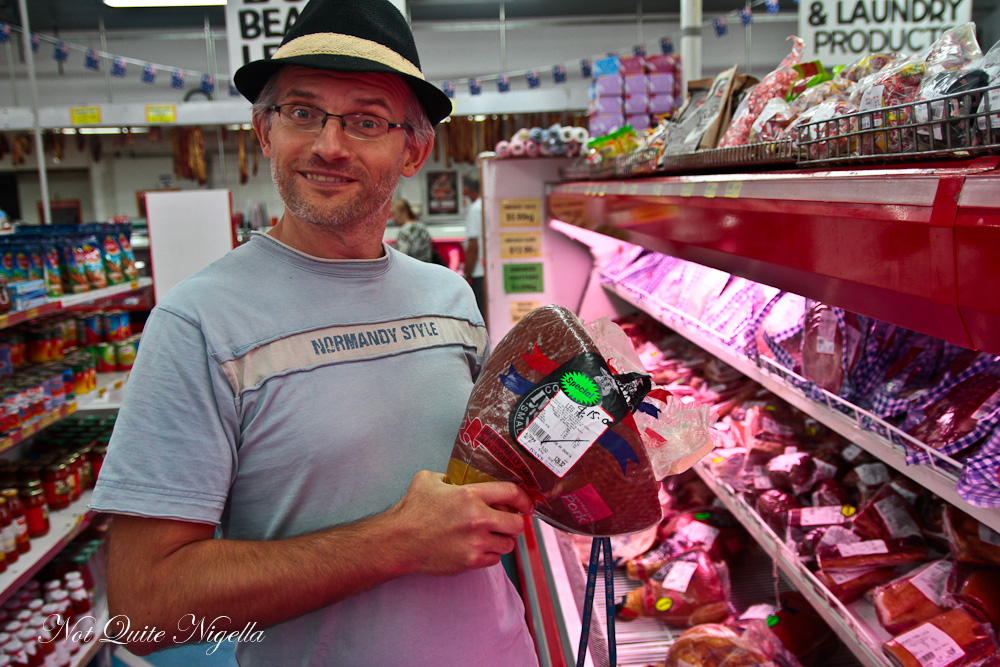 Laporello and his beloved ham

Another fridge holds an immense range of offal including oxtail, ox heart, kidneys, lungs, lamb necks while the fridge alongside has a range of Eastern European cheeses. 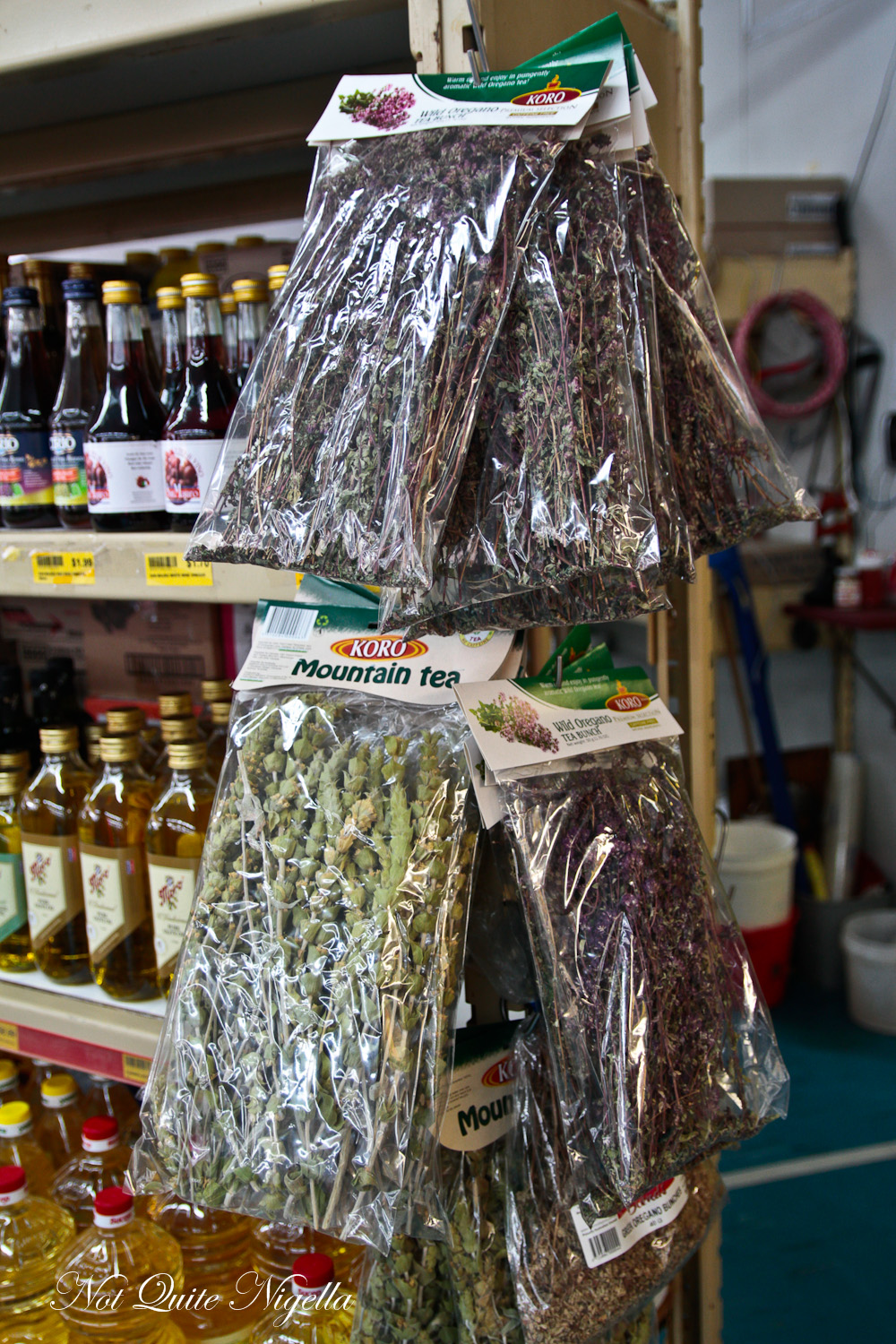 We're nearing the end of the store and we pick up a little packet of Kiki brand sweets and look at the mountain tea before heading to the cash register. Our haul is a modest $44 while Laporello who is clearly in his element comes away with six bags and $140 lighter. It will last him a month. 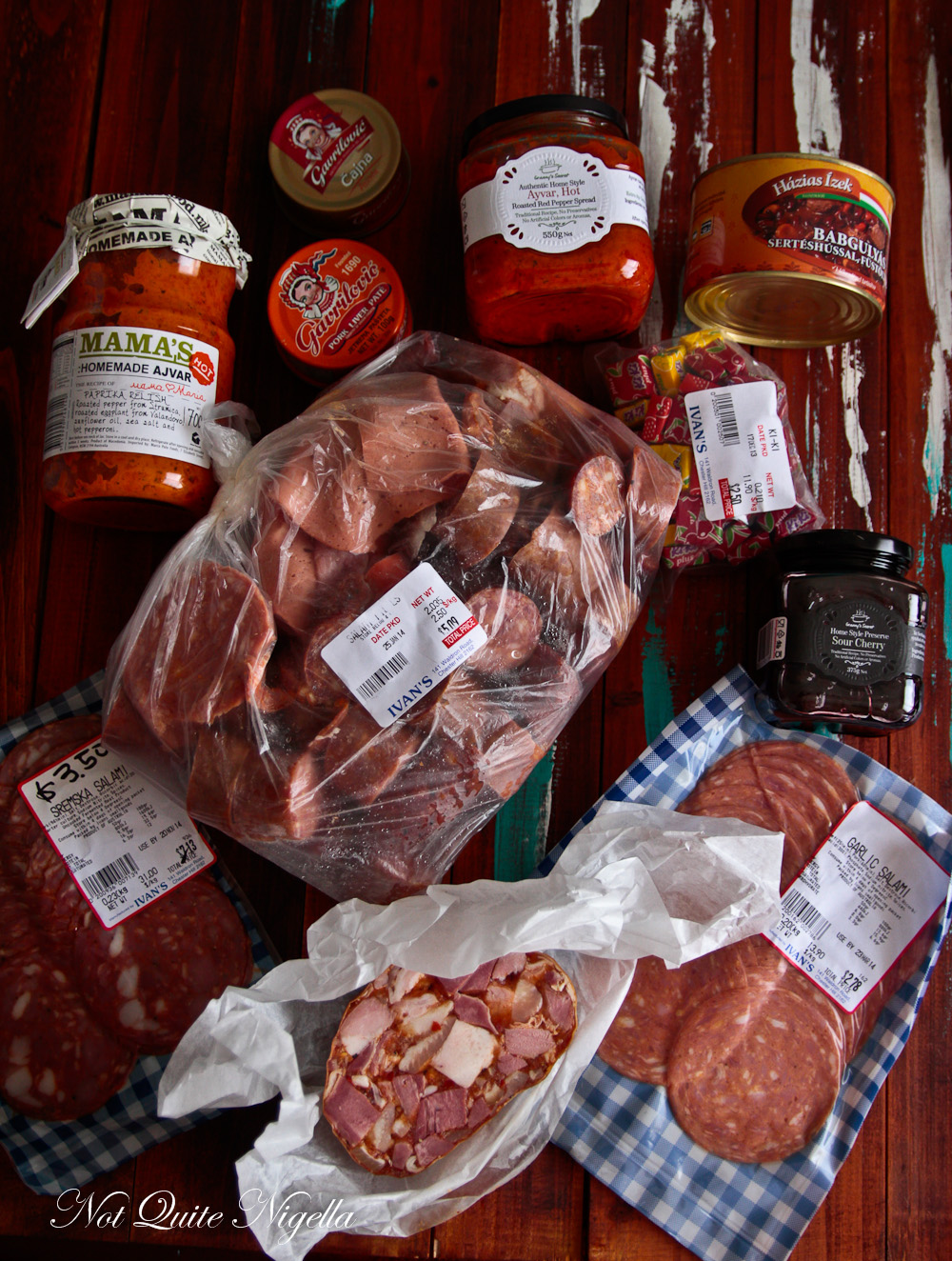 We go home and sample our spoils. We spread some Afghan bread (okay we're going all over the world here) with some ajvar and break open the bag of mixed sausages. They're fabulous but the ones I particularly like are the ones that are drier and spicier as the flavour is concentrated. Nothing is bad at all and every scrap and piece gets eaten, placed on sandwiches, in pasta salads and in omelettes or on home made pizzas.

So tell me Dear Reader, how much do you spend on meat a week? Do you buy it from the supermarket or a butcher or deli?

All items in this post were independently paid for.