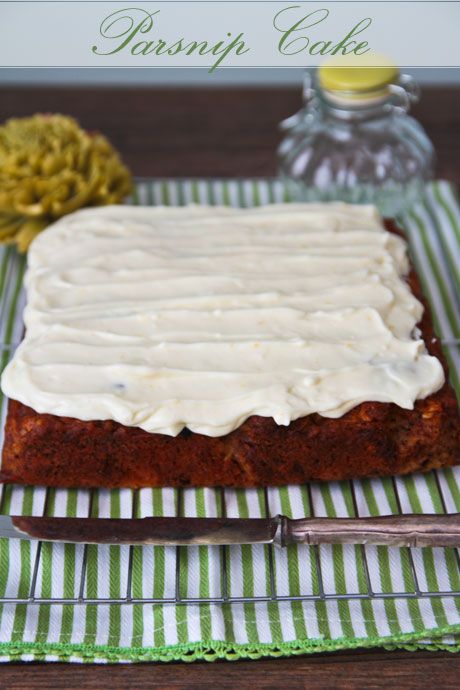 Over the Christmas period, I wrote on my personal facebook page that I was making four cakes over a five day period. Not an unnatural state of affairs for me admittedly, but one in which I nevertheless found myself up to my elbows in cake. The cakes were mostly to bring to friend's or family's houses. To me baking cakes is therapeutic and like second nature and I love creating sweet objects that will be consumed by appreciative mouths. 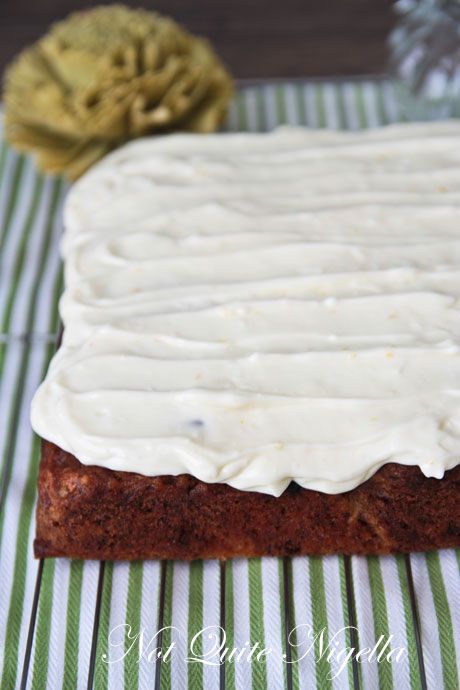 Every year Mr NQN tries to get me to learn something new that opposes my predilection for known second nature activities. To the point where I feel like I'm a pet project for him. This year I promised to learn how to ride a bike. Last year it was to learn how to drive. After much resource bargaining (in which he promised to do something that he considered boring for a day in exchange for me taking bike riding lessons from him), we finally arrived at a date in which we had little to do and the weather was good.

I told him the rules, I had had a vastly unhappy experience learning how to ride a bike with an ex boyfriend. He had taken me to a dark concrete car park and I climbed on his enormous bike and two minutes into the "lesson" I sported a huge scrape on my chin (the scar still remains) and grazes on my arms and legs. Yep dark corners and concrete car parks and bikes where your feet can't touch the ground are not the best way to learn how to ride a bike. So I told Mr NQN that I had to be able to touch the ground with my feet and he agreed. 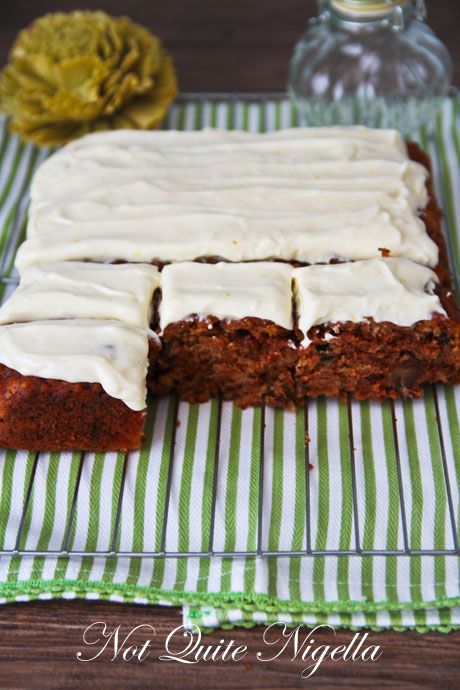 He took the bike and adjusted the seat for me and took it upstairs to measure against me. I had resigned myself to an afternoon trying to not fall off a bike when a look of concern crossed his face. "Have you shrunken yourself?" he asked. "No I've always been this small, " I said to him. I am only 155cms tall and trying to get on the bike seemed like like trying to climb aboard a penny farthing. It was just not going to happen. He stared at me, and then stared at the bike and stared at me again. It turns out that a kid's bike is the perfect size for me! I just requested that it be one with rainbow coloured streamers on the handlebars ;) .

So happily unable to have a bike riding lesson, I baked this cake instead :) 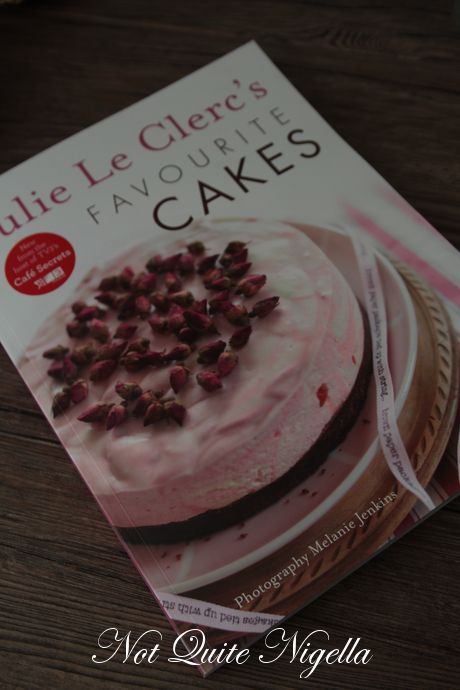 The parsnip cake sounds odd I do realise, but it is like carrot cake-you just don't taste the vegetable in it. Vegetables in cakes are wonderful for making cakes that are moist and stay that way for a few days. I made this a few days before I had to serve it at a family gathering. The cream cheese icing, although not particularly sweet, is just perfect for this cake. It came from a book of cakes by Julie Le Clerc called "Favourite Cakes" that I was sent by Penguin. I was drawn to it because I knew it would have staying power because it was a vegetable cake made with oil which would keep it moist, but also because I knew I would be feeding it to the Elliotts and they are a family of vegetable huggers. I used the new Tefal Fresh Express grater that I was sent and the review follows the recipe.

So tell me Dear Reader, what's something new that you're going to or want to learn this year? 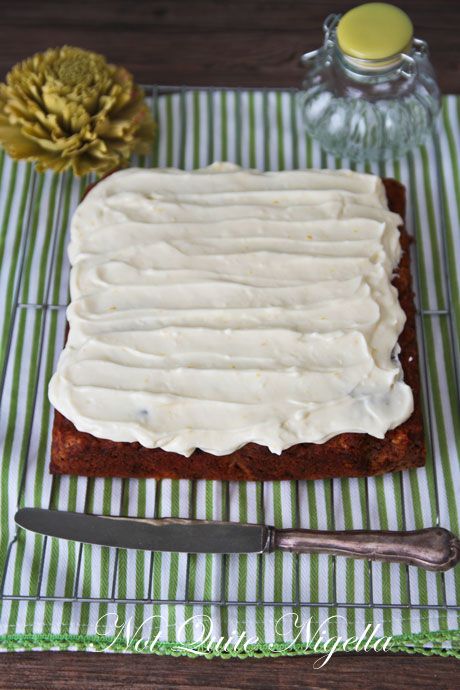 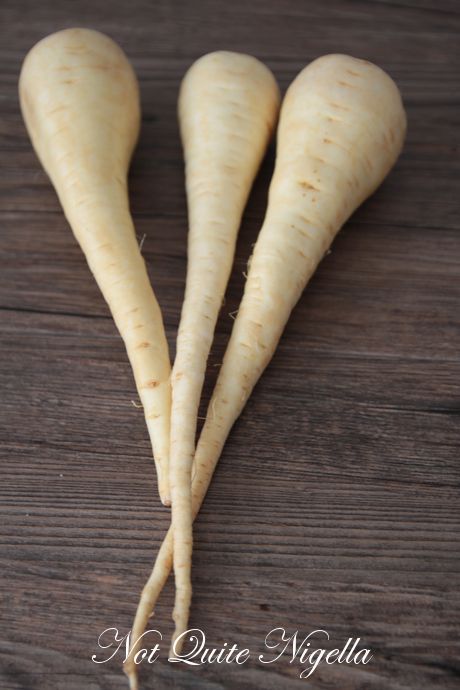 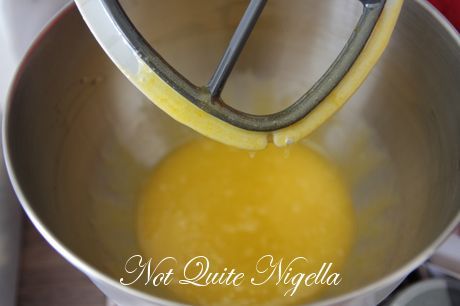 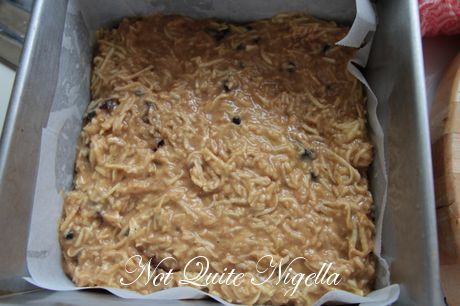 Step 2 - Place eggs, sugar and oil in the bowl of an electric mixer fitted with a beater attachment and beat for 2 minutes until the sugar dissolves and you get a yellow, syrupy consistency. Stir in grated parsnip, sultanas and walnuts. Then add flour, salt, cinnamon, baking powder and soda and stir to combine. Spread into the prepared tin and bake for 30-35 minutes until a skewer inserted comes out clean. Cool completely and then remove from tin.

Step 3 - Make cream cheese icing by beating the cream cheese in the bowl of an electric mixer fitted with a beater attachment. Beat until smooth. Add the icing sugar, lemon zest and juice and continue beating until smooth and creamy. Spread over cooled cake. Iced, this cake can keep in the fridge for several days in an airtight container or at room temperature if it is uniced. 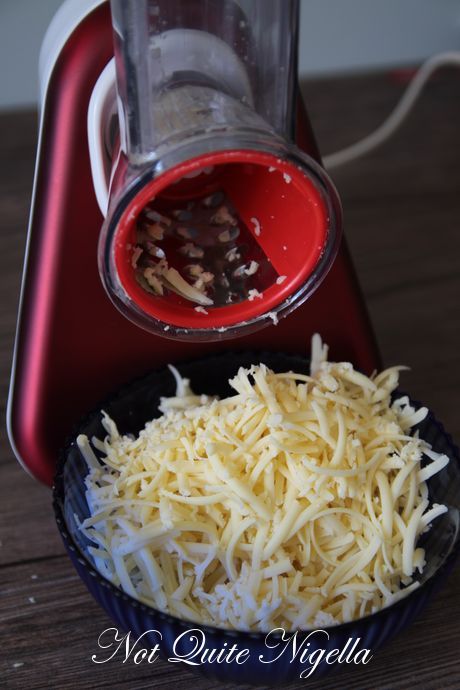 This is the second Tefal item I've tried and like the first, I am quite mixed in my experience of it. The Fresh Express seems to work better for some foods than others. It is like the girl with the curl - when it works well it works really well but when it doesn't the result is quite horrid. It is essentially like having a motorised version of a four sided box grater but without much risk of losing knuckle skin-which always seems to happen to me. Nevertheless, it makes me look forward to making my favourite Vietnamese chicken salad which requires so much grating that I only used to make it when Mr NQN would volunteer to do the grating. 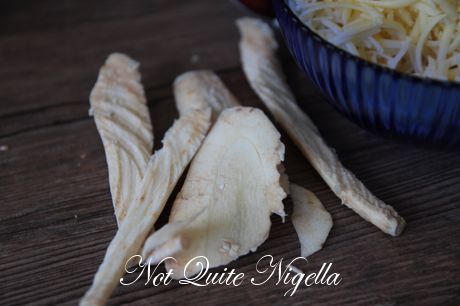 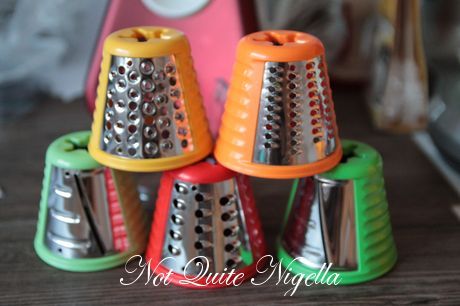 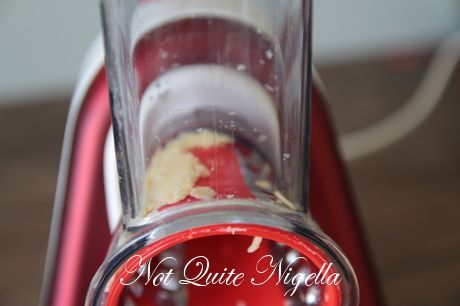 Food stuck between grater and holder 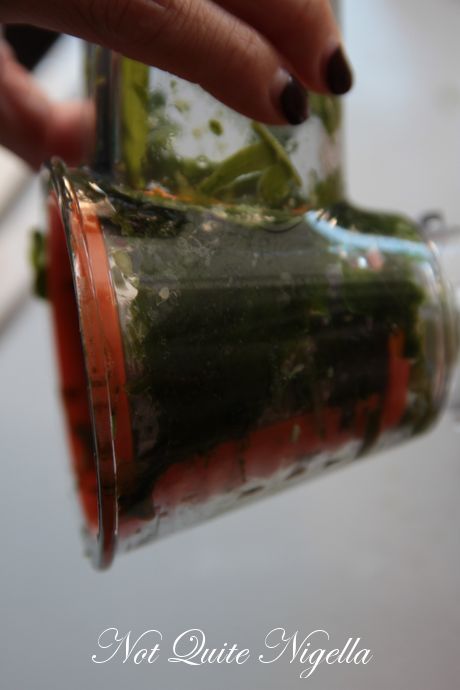 When things get mushy and clogged... 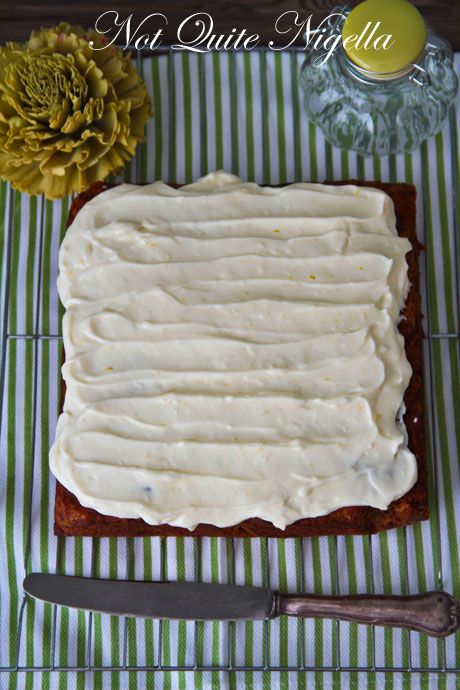