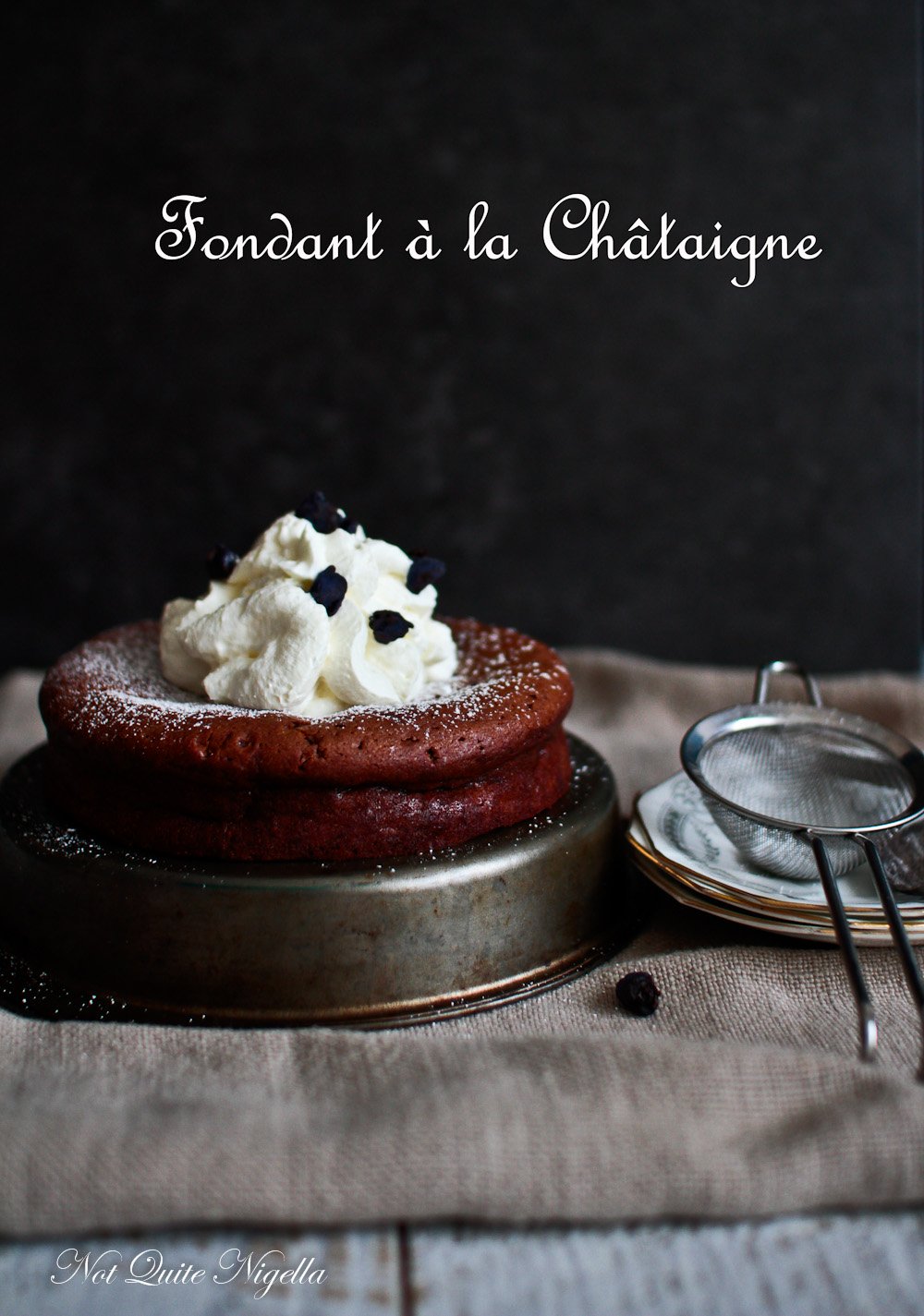 This chestnut chocolate cake is something special. Save it for a Christmas or holiday treat. What people won't even guess is how truly simple it is. You need nothing more than a whisk and four ingredients. This Corsican treat has the most delightful texture unlike any other cake you may have tried.

One day Mr NQN and me were driving in Sydney when we noticed a man standing outside a Chinese restaurant. Actually I'll admit I was busy on my phone snapchatting while Mr NQN was driving so I didn't see him and it wasn't until we were out of eyeshot that Mr NQN described him. Apparently it was a Caucasian man wearing a Chinese bamboo hat dancing wearing a sandwich board outside a Chinese restaurant. I mean sometimes you get the hint that you should probably stay away.

When plans one night were derailed by a restaurant being unexpectedly closed, we ended up finding a plan B restaurant. It was a very strange experience. The pervading aroma when we walked in was of sweet and sour sauce. The gentleman serving us kept swiping his nose and all we wanted to do was leave but we didn't want to be rude. We ordered a few things-they ranged from strange (potato chip creamy salad with tinned pineapple pieces) to ok (the sweet and sour pork). We paid our bill and I apologised to our friends for the very strange if not slightly entertaining meal.

"I'm amazed that you wanted to go there," said Mr NQN, "that was the guy that was wearing that hat dancing outside". I let out an "Arrrgghh!!" Had I remembered that, I might have known to stay clear. I hadn't put two and two together and Mr NQN hadn't questioned my sanity. I'm not sure what sort of Chinese food was being served and I'm pretty sure that it was not very authentic - the potato chip mayonnaise salad with pineapple was just bizarre that I'm sure no region of China would claim it. 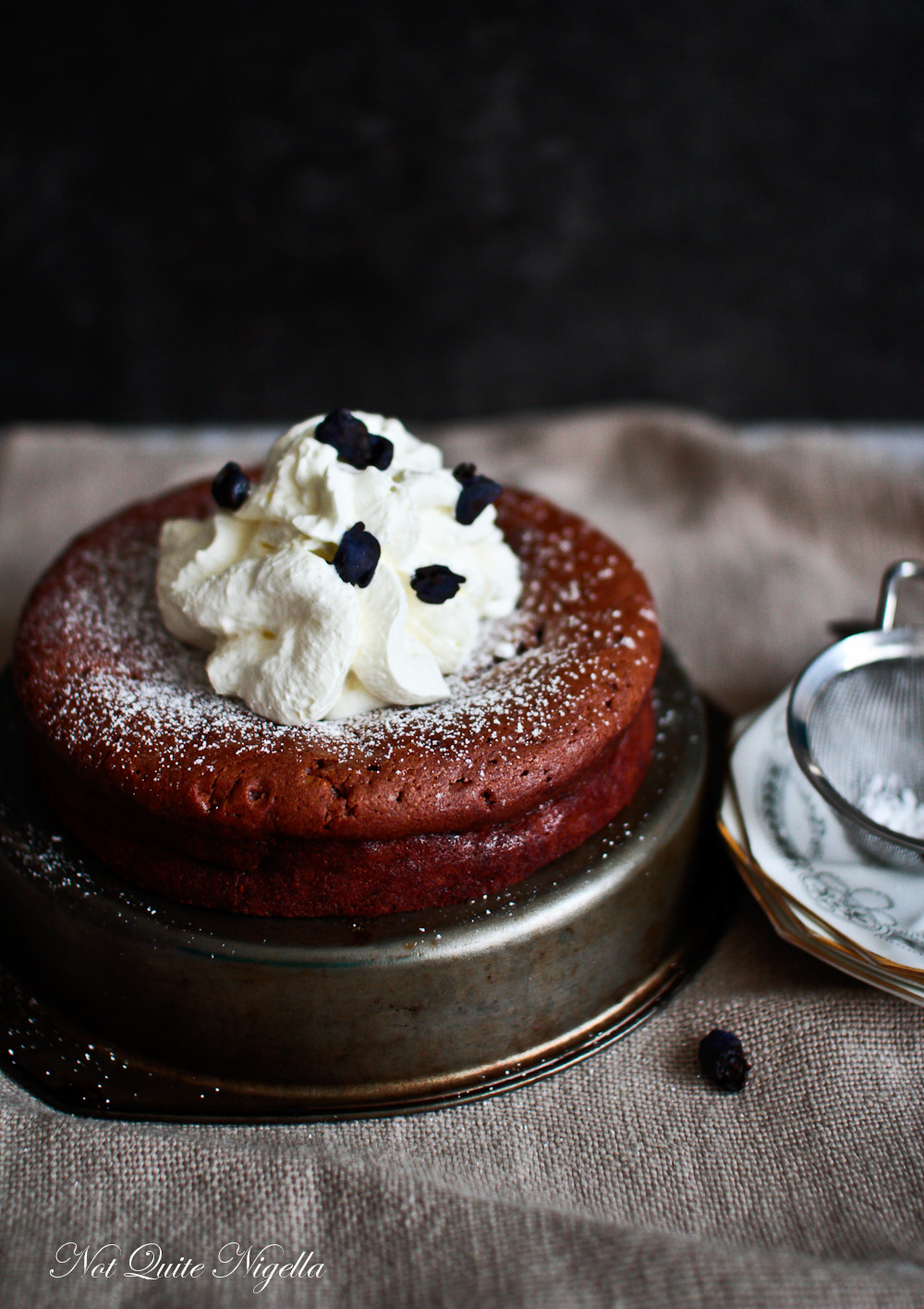 Sometimes when you visit an overseas country or city you find things that you didn't really associate with the cuisine but are absolutely part of a regional table. Last year around this time we were in Corsica in France on a cruise. At every port I had a detailed list of things we had to eat (and notably absent was a list of sights-oops I guess I really live to eat! :P) and there was a bakery I was eager to find.

It was called Boulangerie Galeani and although we had walked past it a few times, we didn't see it. When we asked a passerby she pointed at the slender shop and the woman in the shop was lovely and recommended some things. My favourite item was a Fondant à la Châtaigne made of chestnuts. They're a popular item on Corscia and historically they were used until the beginning of the 20th century as a major source of nutrition as they are rich in fibre, minerals and vitamins. Corsica had many chestnut tree forests and the trees were known as "bread trees". Now they harvest markedly less than in the 1800s and back then Corsicans relied on them in order to survive.

I love chestnuts because I love the gorgeous flavour to them and when I sank my teeth into the fondant I was rewarded with a ripple of pure pleasure. This cake was damp, moist and yet light and tasting just of chestnut. After offering a bite to Mr NQN I ate my remaining half slowly with tiny buck tooth rabbit nibbles lest it end. And I was determined to make it again.

An added bonus is that this is an incredibly easy cake to make. Like the easiest cake you could ever make really. It's all mixed in a bowl with a single whisk and then baked. And then eaten with gustatory pleasure. The texture of this cake is singular - there is nothing really quite like it. You can get that smoothness and richness from the sweetened chestnut puree and then the eggs set it and the chocolate adds a dark bittersweet edge to it. But this is also fantastic without chocolate if you want the chestnut flavour to come through even more which I believe is how they served it at the store. 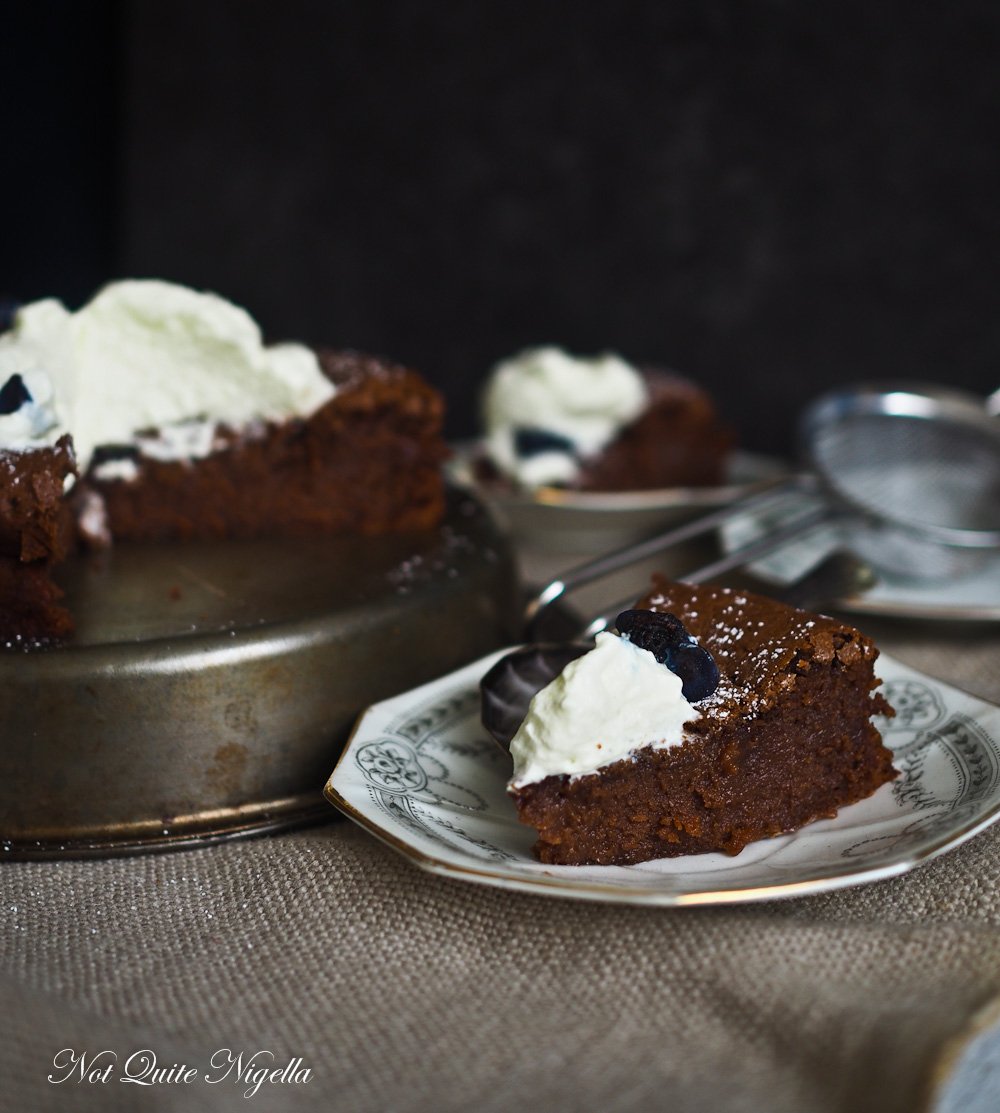 This makes a wonderful Christmas cake as an alternative to a fruit cake or in addition to. And to aid in that endeavour it can be made a day ahead of time or even two and stored covered and wrapped well in the fridge. I served it with a cloud of whipped cream and some candied violets, neither traditional but really I'm a showgirl at heart that can't resist a bit of embellishment. I will say that if you love chestnuts and want to try a gorgeous intriguingly textured cake, give this beauty a go!

So tell me Dear Reader, would you have stayed away from that Chinese restaurant? Have you ever had anything like a potato chip, mayonnaise and tinned pineapple salad? Are you a fan of chestnut desserts? And when you visit a city or town do you have a list of things that you want to eat? 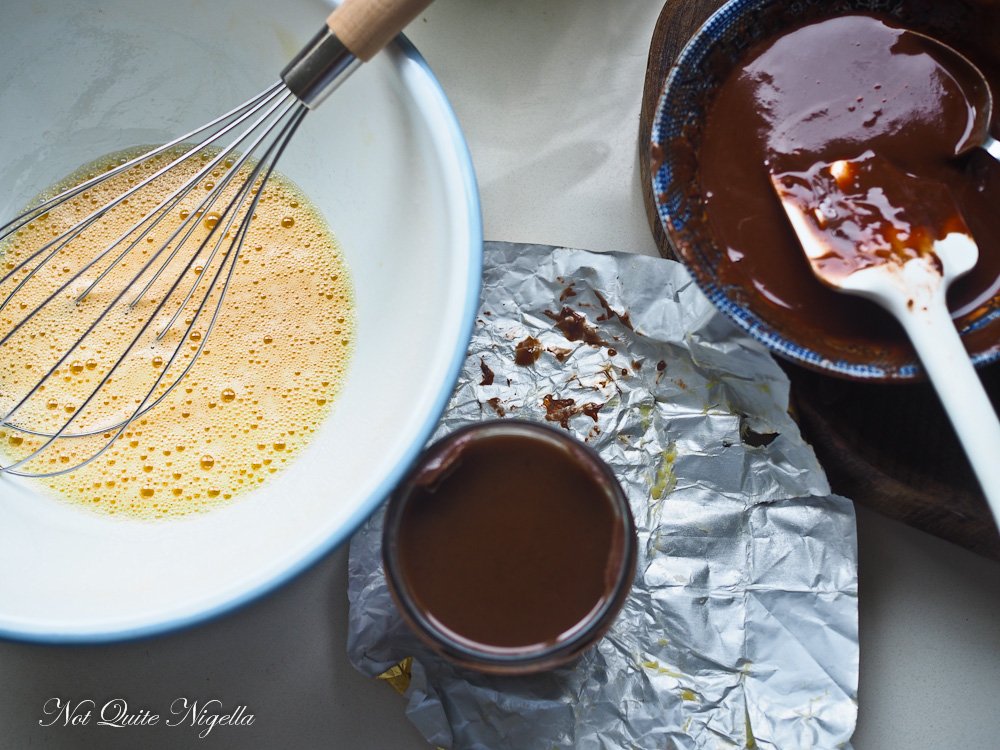 Step 1 - Preheat oven to 160C/320F and line a 17cm/6.8inch diameter round tin with parchment on the base and sides. Melt the chocolate and butter and allow to cool slightly for 5 minutes or so. 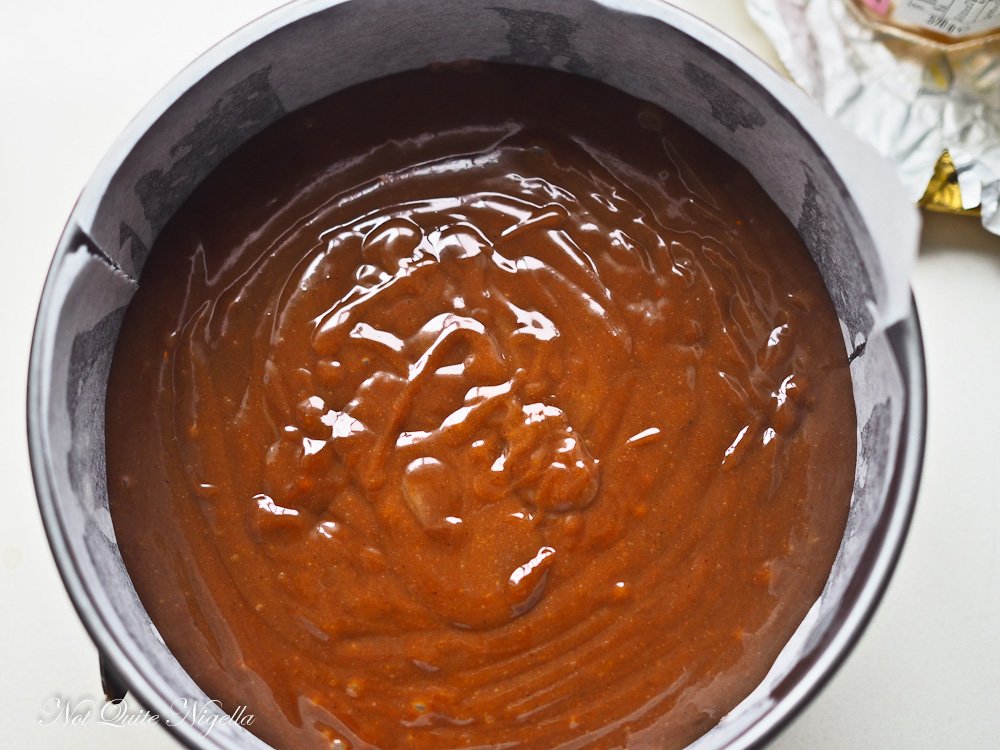 Step 2 - In a large bowl whisk the eggs and add the chestnut puree in three lots whisking to ensure that it is incorporated. Add the melted chocolate and butter mix and stir to combine. Scoop into the prepared tin. Bake for 30 minutes. Reduce the heat to 150/300F and bake for a further 30-40 minutes until the centre is cooked. Allow to cool completely. Decorate with whippped cream and violets. 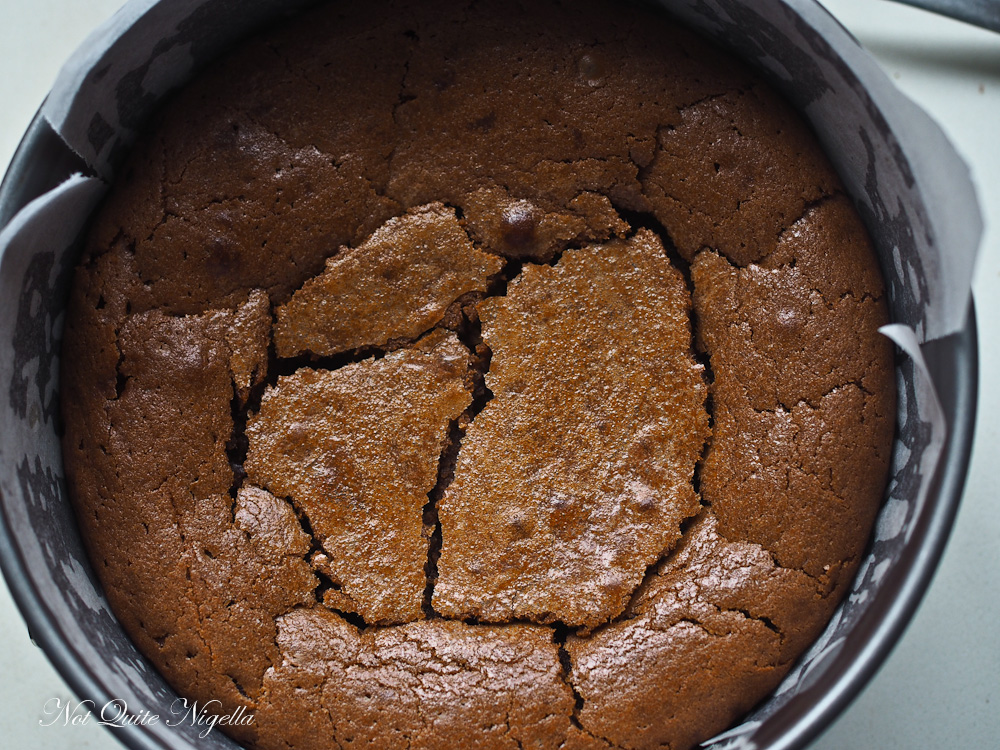 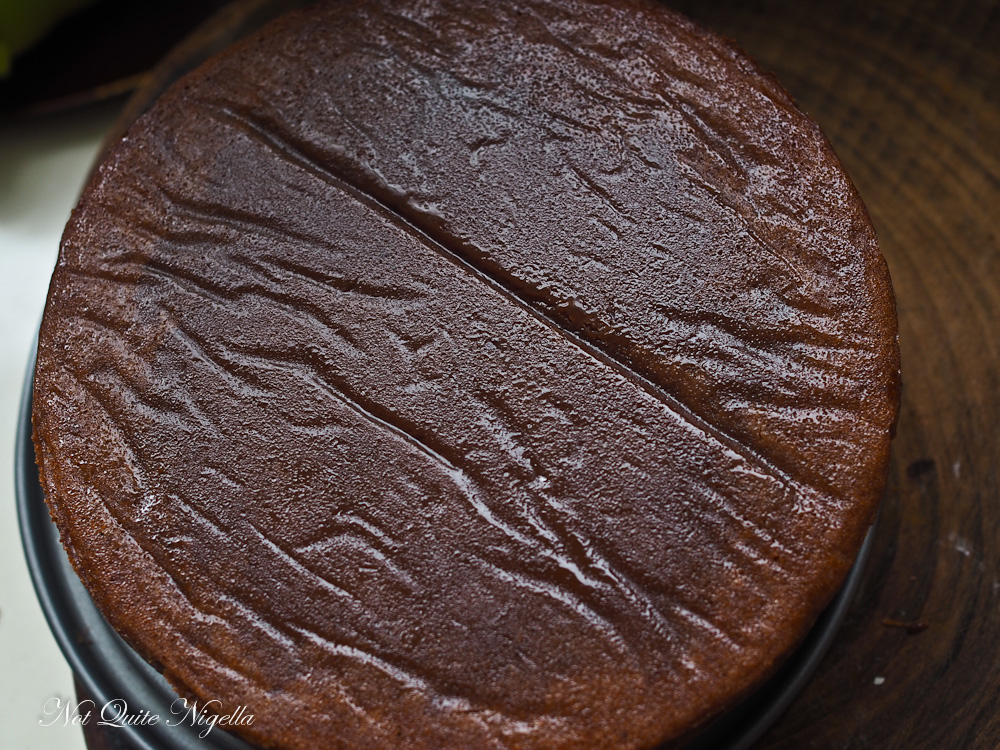