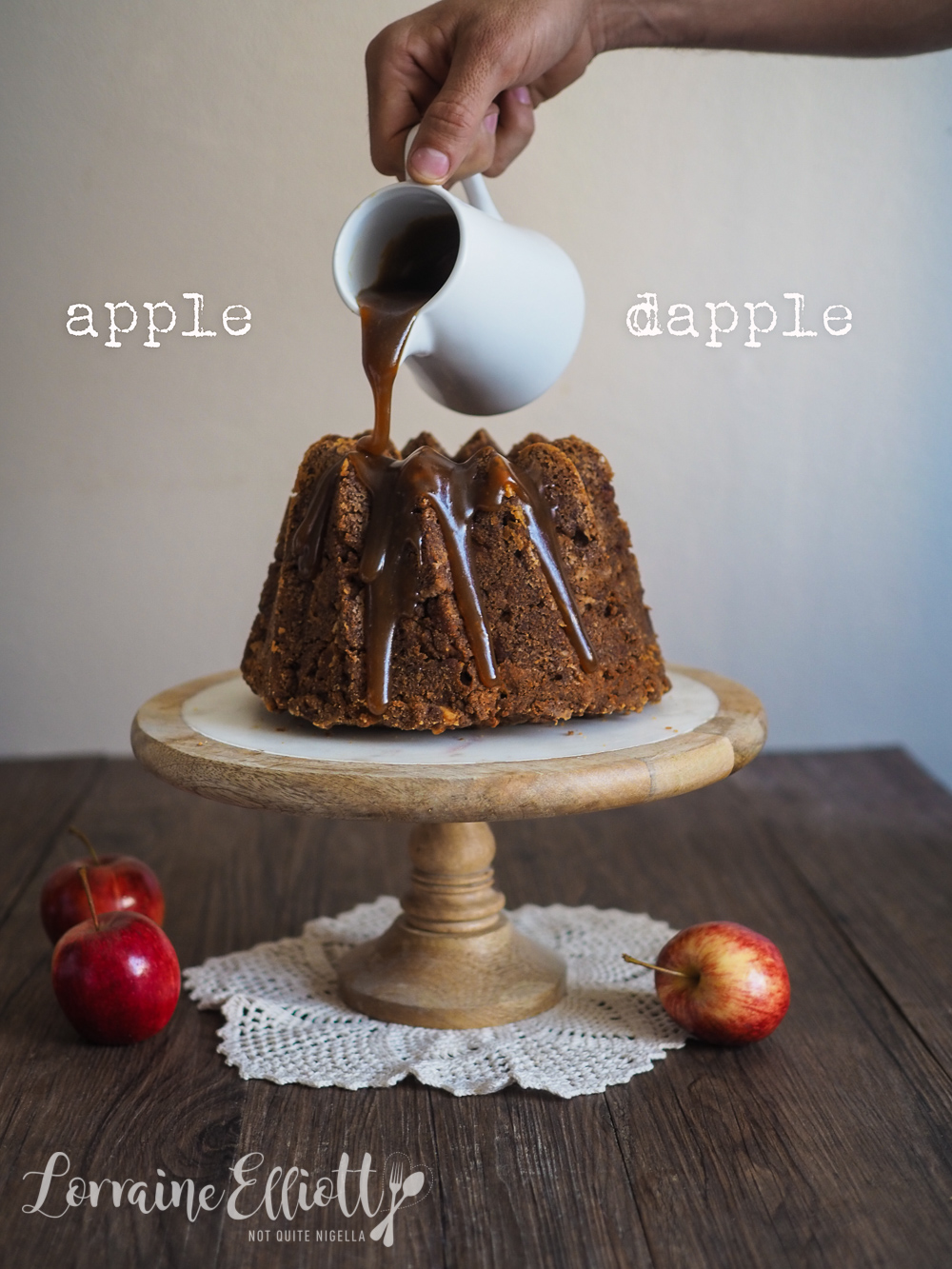 I can't claim to have created this recipe for Apple Dapple cake. If you do a quick search you'll see how every recipe for apple dapple cake is pretty much exactly the same. The origin of this cake is unclear-Amish, Southern American or Jewish cultures all make some sort of version of this. All I did was some modifications to the sauce to make it a bit more moreish by combining browned butter and salt to the butterscotch and to make the cake a bit softer by using cake flour. 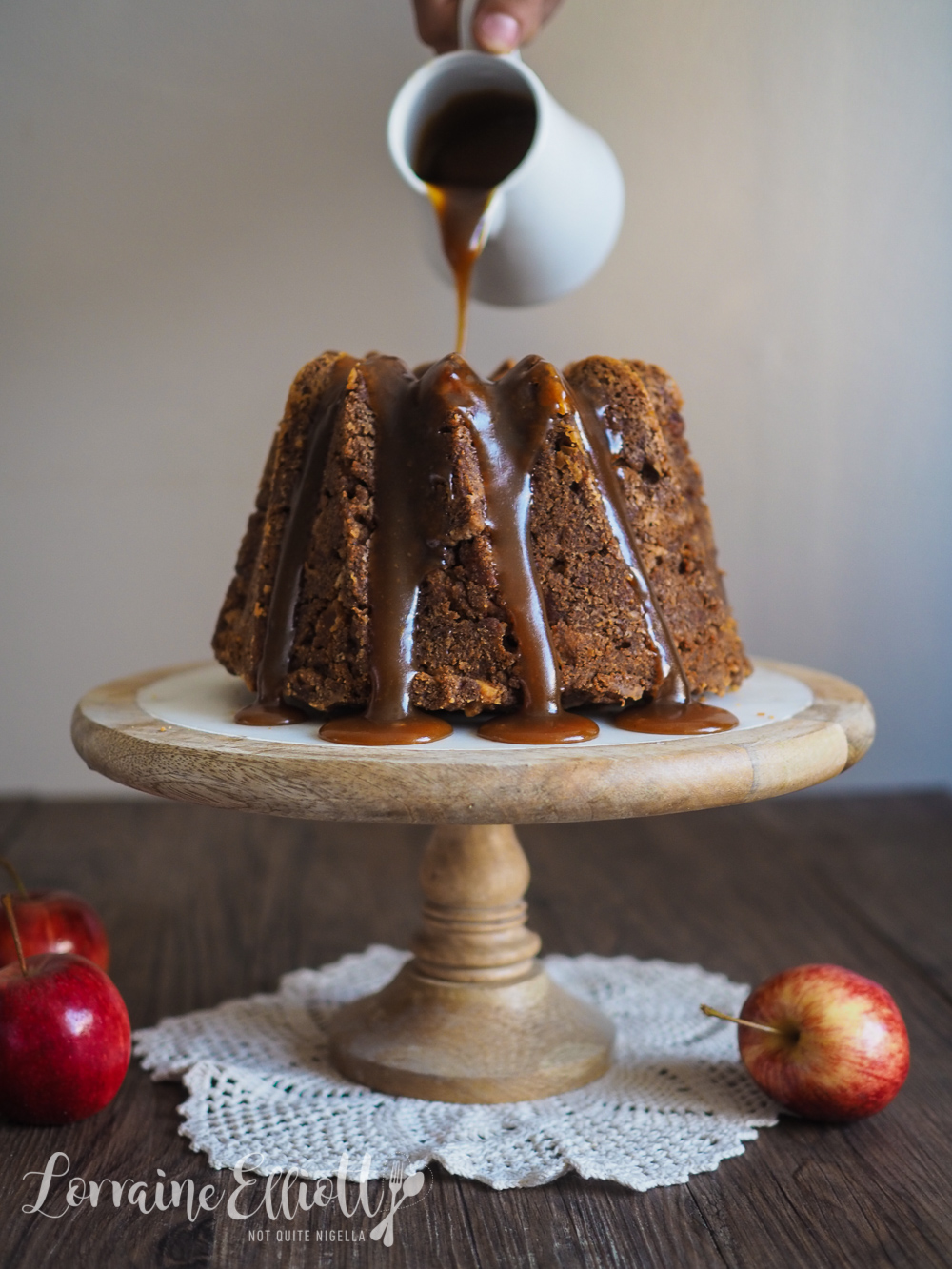 Which flavourless oil to use? Cakes are best with a mild flavoured oil like canola, sunflower or grapeseed. Olive oils tend to have a stronger flavour that doesn't work as well in cakes unless you use an agrumato olive oil in the flavour you want.

For better flavour for your cakes, always, ALWAYS toast your nuts first. Nuts mixed within cakes never quite develop that wonderful toasty flavour so always toast them first. Within a cake they won't burn from being twice cooked. I strongly recommend using pecan nuts in this cake although walnuts and other nuts will also do. 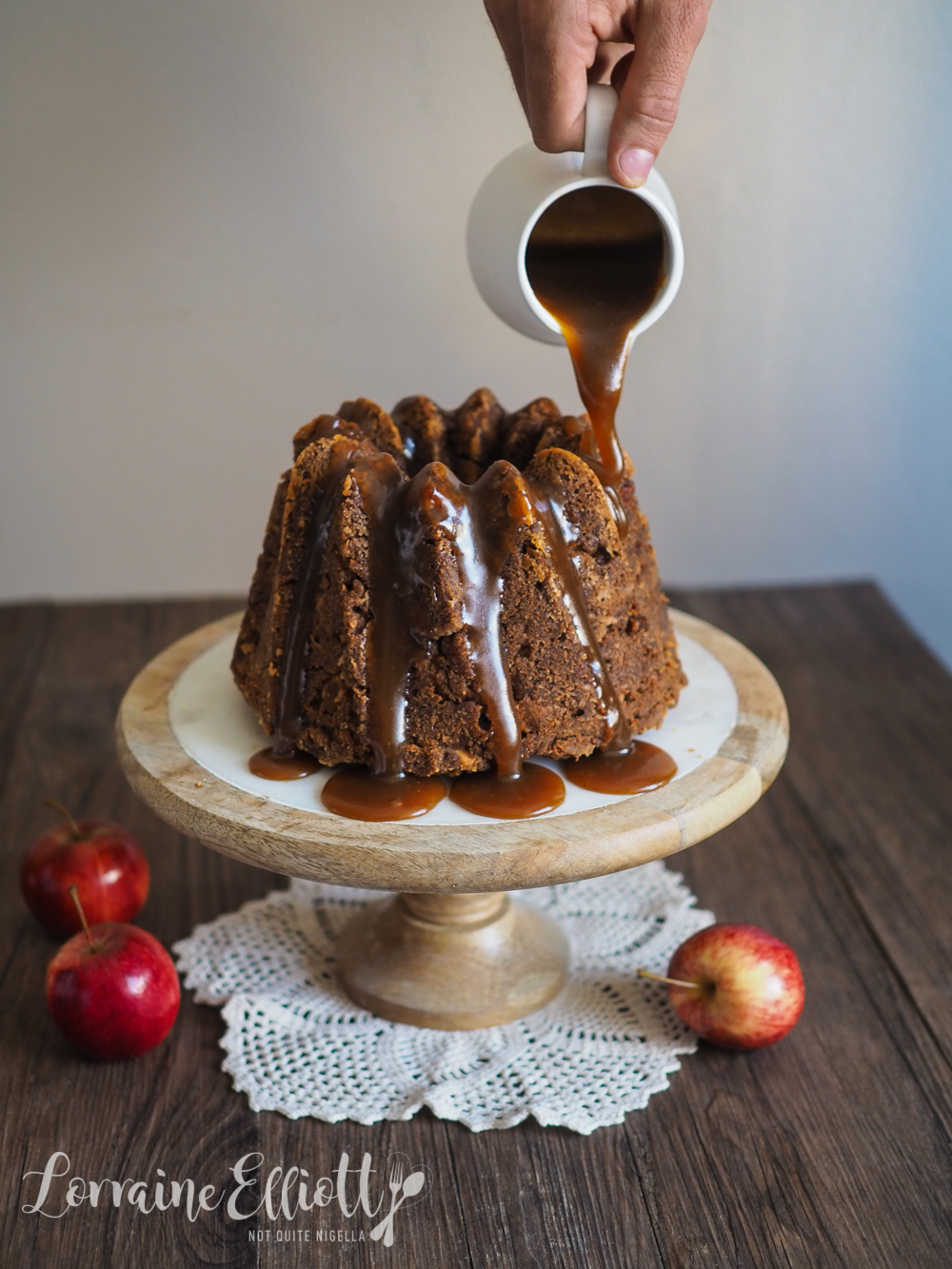 Shred or dice apples? This apple dapple cake has big chunks of juicy apple and truthfully I think I diced mine too big. If you prefer a smoother textured cake by all means grate the apple :)

I don't have a bundt tin, can I bake this in a regular tin? Definitely! You can bake this in a sheet, round or loaf tin. Just watch to see when it cooks. It should cook fastest in a sheet or lamington tin.

Just a warning: this cake smells incredible when it is baking. It's a mixture of the spices and pecans (pecans are one of the most aromatic nuts when they're roasting). 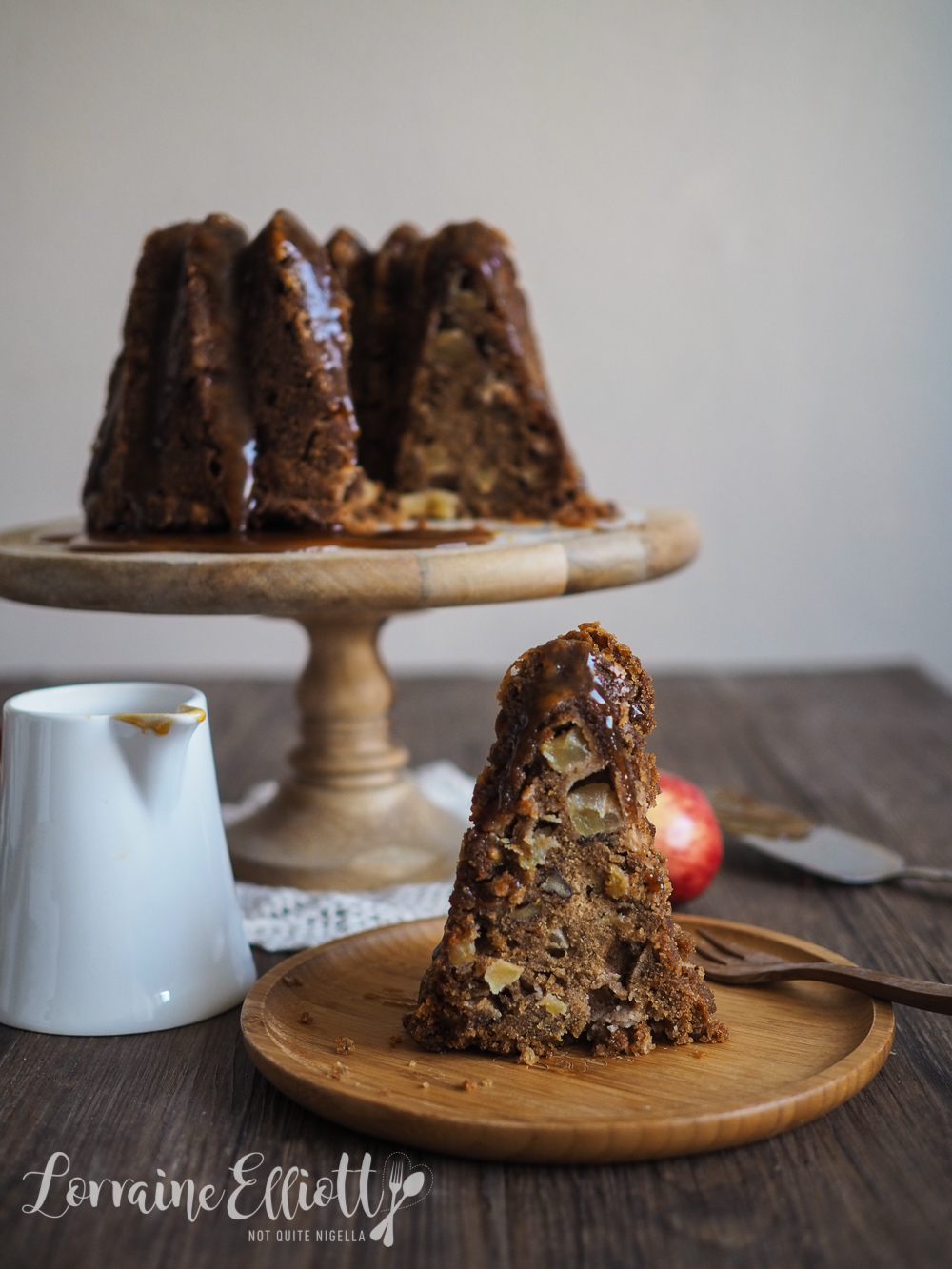 I am a slave for a good smell and recently we were at a restaurant where occasionally a really delightful smell would waft past. Someone had a really nice scent and I became obsessed with it. I'm very much about smells and I find some people's smell can be a bit off-putting while I gravitate to certain people because they smell good (or at least they smell good to me).

Throughout the whole night, when I could smell it my head would whip around because I wanted to know who smelled that good. Then a waiter came to our table. "OMG It's you! You smell so good!" I said, excited to have finally found the source. I didn't realise how weird that sounded (I mean if I were a man talking to a woman I'd definitely come across as creepy). 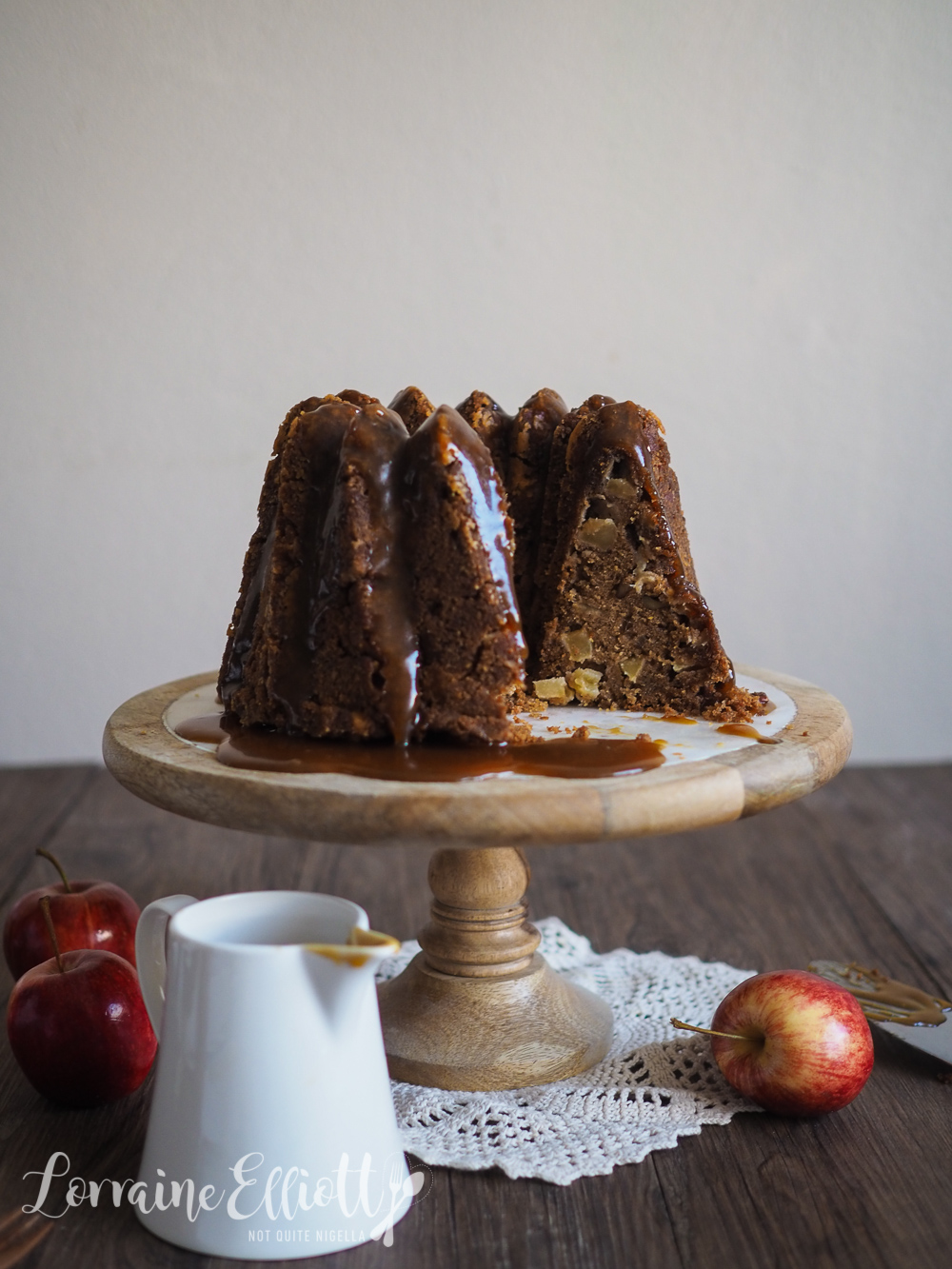 It turns out it was just a deodorant and then he said, "OMG I feel shy now, nobody has ever told me that." I felt guilty about making things weird but sometimes you blurt things out!

So tell me Dear Reader, what is your sense of smell like? Are you drawn to or repulsed by certain people because of their smell? Do you have a favourite baking smell? 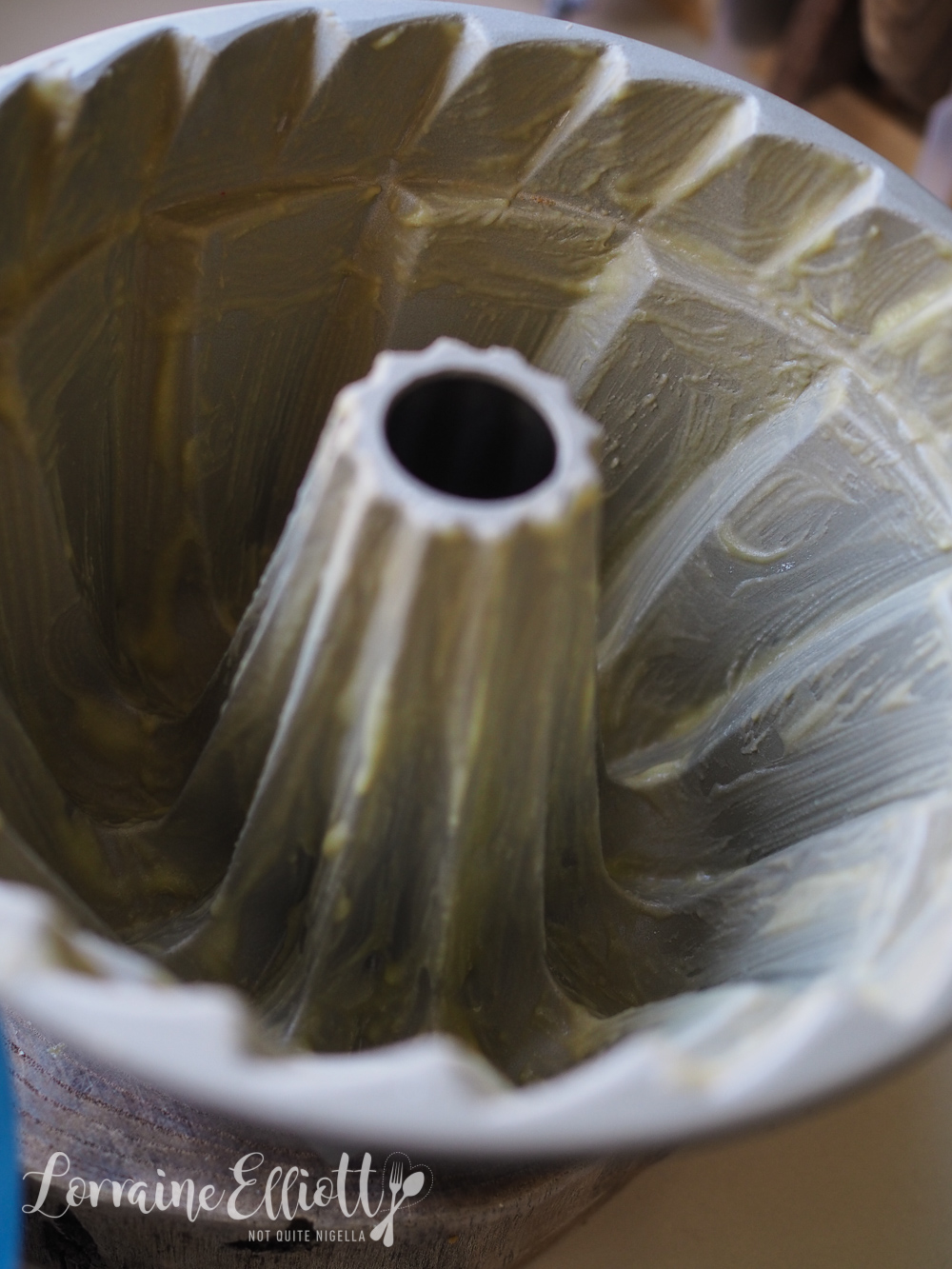 Step 1 - Grease a bundt tin well or line the base and sides of a 30x20cm/12x8inch rectangular slice tray with parchment. Preheat oven to 180C/350F. Whisk the cake flour, sugars, baking soda, cinnamon, nutmeg and salt in a large bowl. Toss in the apples and pecans. In a jug whisk the oil, eggs and vanilla and stir into the flour mixture. 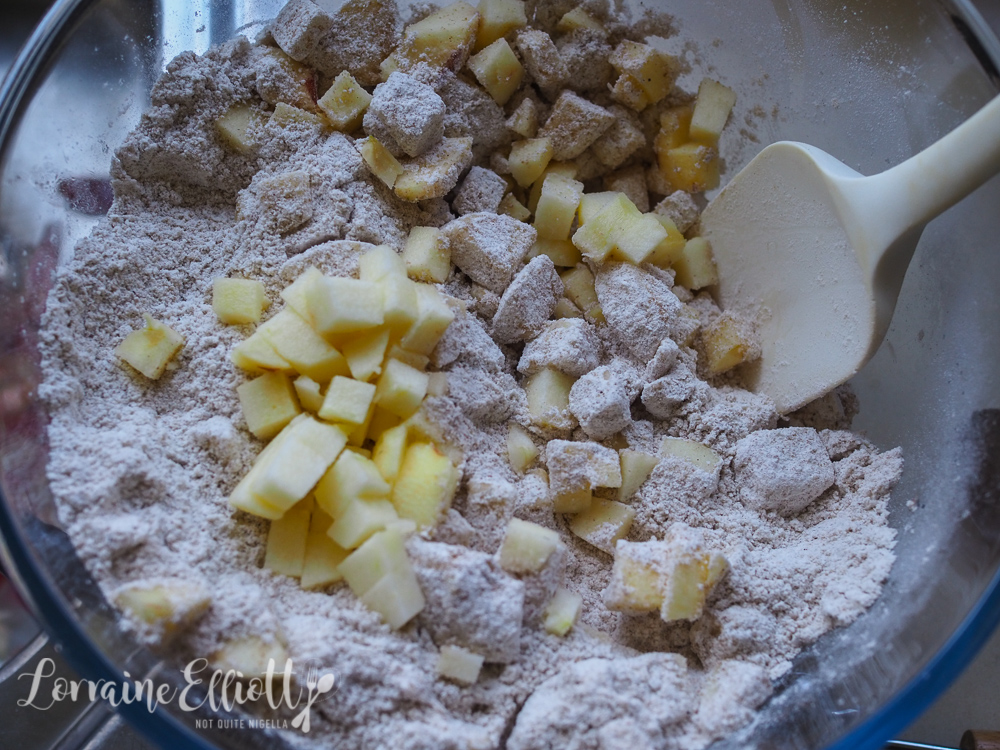 I think my chunks were a bit too big. Dice smaller than this. Learn from my mistakes ;)

Step 2 - Scoop into the prepared tin and bake for 45-50 minutes or until it springs back when gently pressed. Cool in the tin. 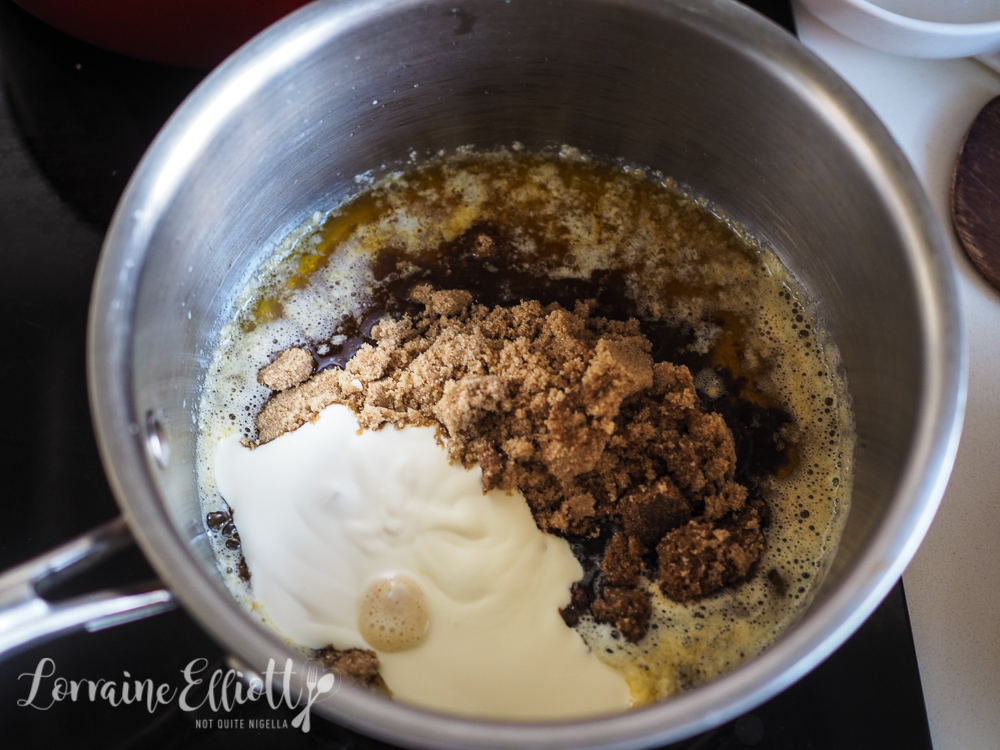 Step 3 - Place the butter in a small saucepan and heat on medium to high heat. Allow it to bubble and brown, it is ready when it starts to smell nutty (watch it to make sure that it doesn't burn). Then add the brown sugar and cream and cook on medium heat until it thickens-mine took around 10 minutes. Add vanilla and salt to taste (it will be hot so careful tasting it!). Allow to cool until it becomes a thick, pouring consistency. 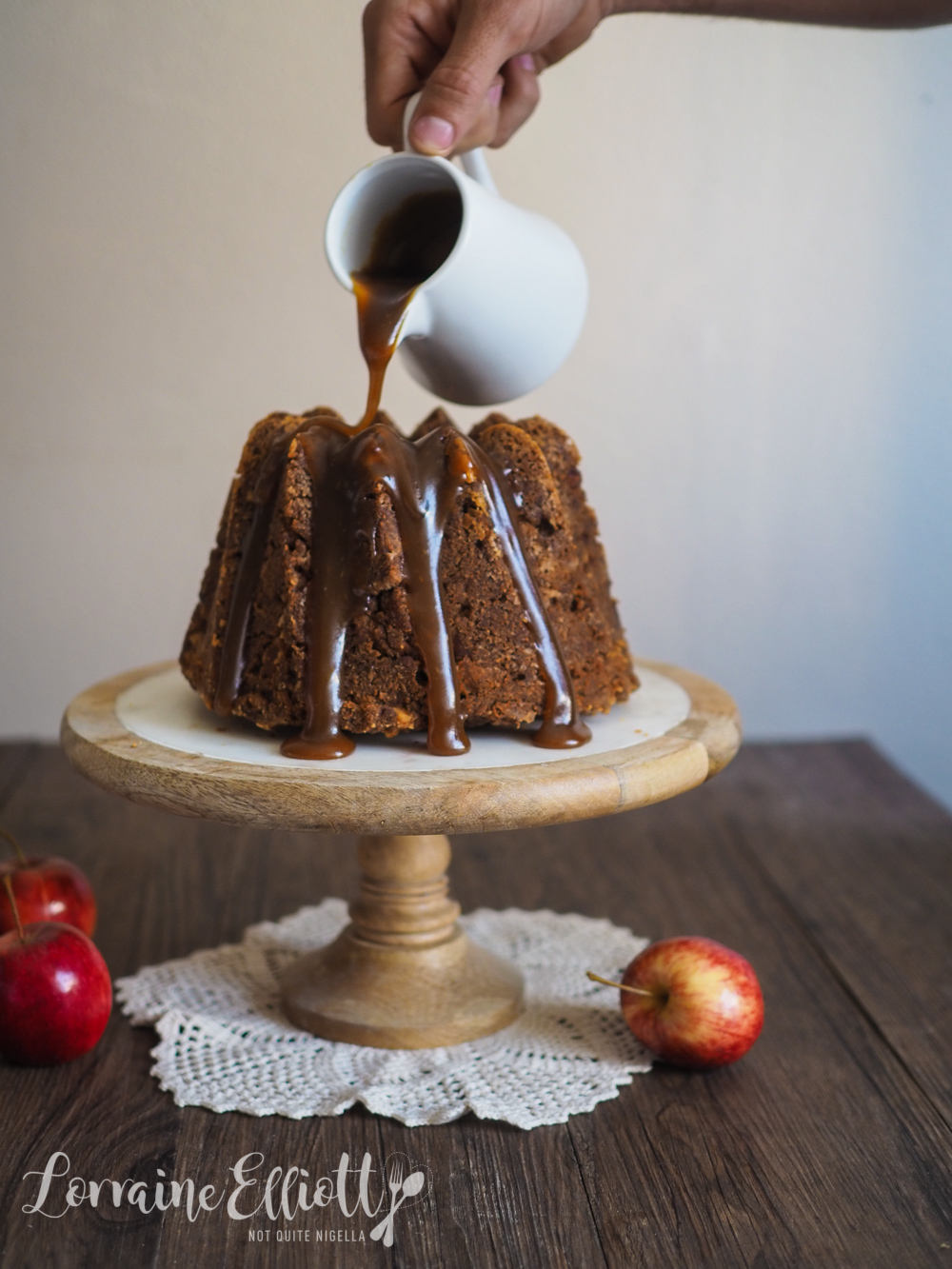 Step 4 - Place serving plate underneath the bundt tin and dislodge. Spoon the butterscotch sauce on top and leave some to pour on each slice when serving.