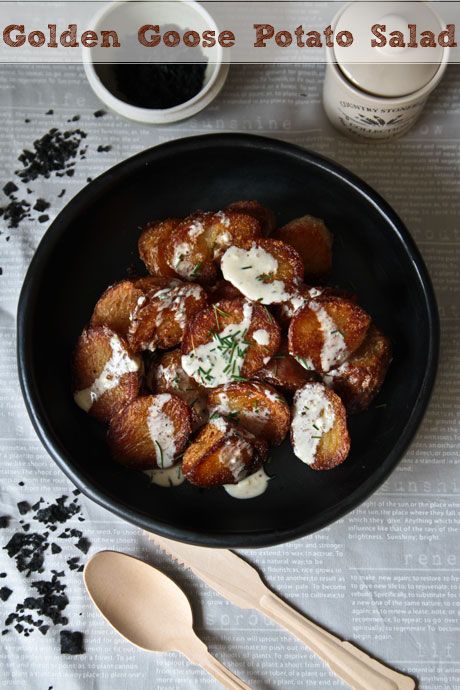 Last year for Christmas I roasted a goose. It was my first time roasting one and it brought back memories of one of my favourite stories when I was young. It was about a goose lady who lived in a farmhouse. She had a flock of geese and one night when it was thundering and lightning outside she brought in her geese from the storm to protect them. I thought that it was a charming story especially as I had only a passing interaction with pets (and you can't really hug a goldfish, they tend to die when you do) so the idea of having a live goose in a house was something that I dreamed about.

Little did I know that a few decades later I would find out that my mother in law Tuulikki was a goose lady. When I told Mr NQN of my plans to roast a goose he told me of how his mother had looked after a flock of geese when he was growing up. One of them was sick and nursing a broken foot so she brought the goose in to sleep with the family.

I told you they were an unusual family didn't I? ;)

He also revealed to me that rather than being charming, the goose was quite frightening to his chubby, tiny four year old self. "They hiss at you you know!" he said. So much for fairytales! 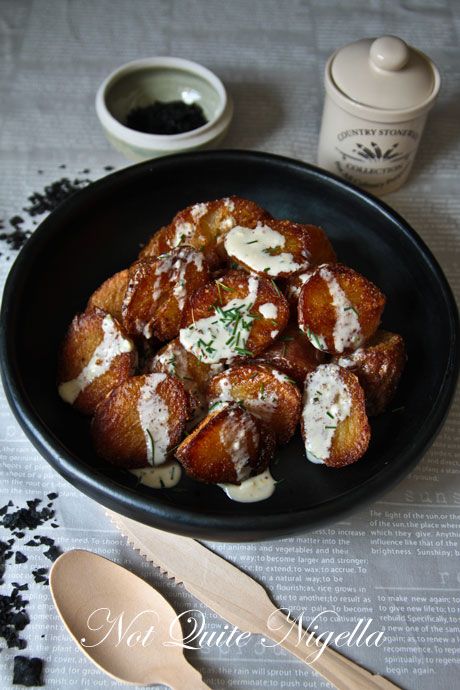 In any case,  I still roasted that goose, being sure not to place it in front of Tuulikki lest it traumatise her. And I still had the several cups worth of goose fat that rendered from it. The fat lasts for quite a while in the fridge and of course the best partner for goose fat is potatoes. After Christmas this year, we still had a surfeit of potatoes and while I was cleaning out my fridge and cupboard I decided to try and make a potato salad but instead of using boiled potatoes, I wanted to use golden roasted potatoes instead and make it a warm potato salad!

A little more cleaning out of the fridge gave me just what I needed for the dressing with some some buttermilk as well as a little jar of lovely boutique sweet chilli sauce. And after roasting the potatoes in the goose fat so that they crisped up bronzed, golden and crunchy I seasoned the crunchy, golden potatoes and drizzled some tangy, creamy and spicy buttermilk dressing on top and as they say, everyone lived happily ever after.

Except the goose, sorry about that.

So tell me Dear Reader, what pet did you want the most when you were younger?

Buyer's tip: You can buy goose fat at specialty stores and delis. You can also use duck fat as a substitute for goose fat. 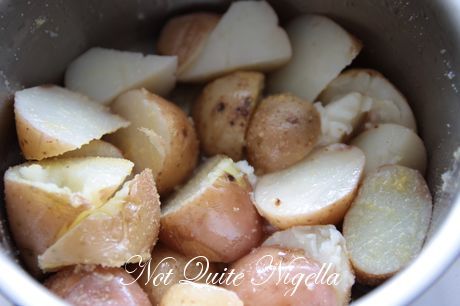 Step 1 - Preheat oven to 200c/400F. Scrub and wash the potatoes keeping the skin on (or peel them if you prefer, I just find that task very boring and not worth the effort). Boil or steam the potatoes for 10 minutes and then drain them well-you don't want them too soft. Slice the potatoes into small bite sized pieces as shown. In a saucepan (not too heavy) heat up the goose fat and add the potatoes-do this in two or three lots as it can get quite heavy otherwise. Sprinkle over some polenta or semolina to give them crunch and then toss them bashing them up slightly on the edges to give them more crunch. 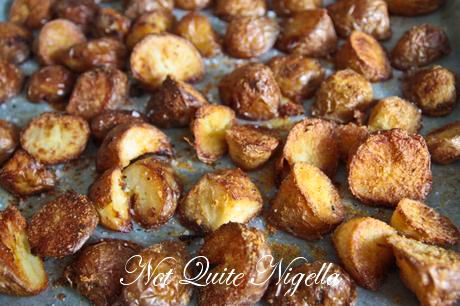 Step 2 - Bake the potatoes on a parchment lined tray for 30 minutes and then take them out and turn them over to give the other cut side a good golden roasting and then bake them for another 30 minutes turning up the heat to 220c/428F for this last half hour. Cool slightly and sprinkle generously with salt.

Step 3 - Make the dressing while the potatoes are cooling-you don't want them stone cold but you don't want people burning their mouths on the potatoes. In a measuring jug, add the buttermilk, mayonnaise, sweet chilli sauce, mustard, paprika, herbs, salt and pepper and whisk until combined. Drizzle over the golden potatoes.  Garnish with chopped chives or green onions. 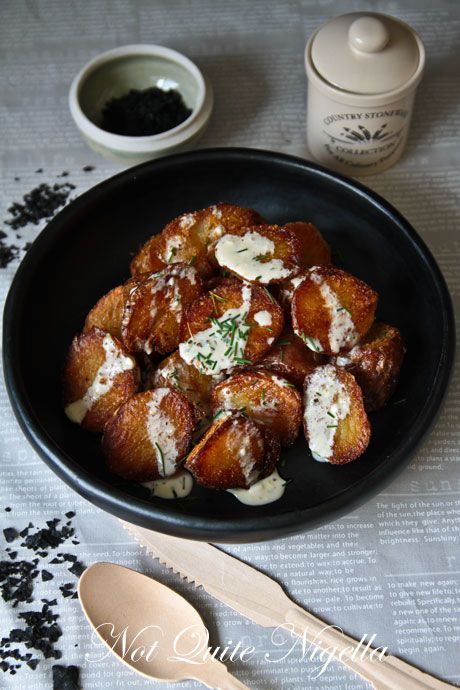