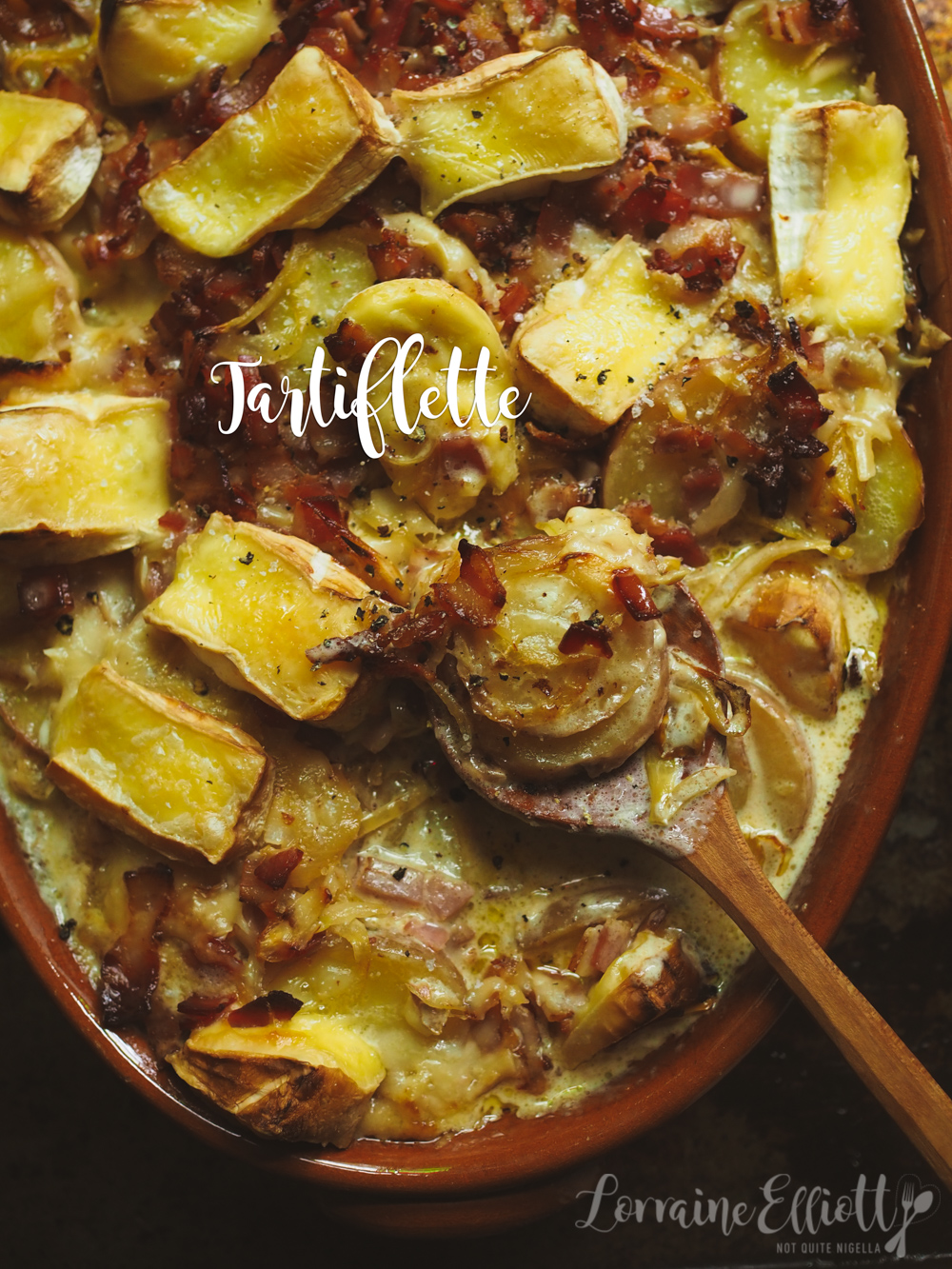 It's Tartiflette time! We're smack bang in the midst of winter here and we need to bring out the big guns. And that means the most divine Tartiflette! Tartiflette is a creamy French cheese, bacon lardon and potato bake. It's one of the most delicious, warming winter dishes and perfect for Bastille day coming up!

Tartiflette is from the Haute Savoie region of Franceand is usually made with Reblochon cheese, a soft washed wind cheese. One of my favourite parts of Tartiflette is the interplay with the sweet onions and salty bacon.

1 - Choose waxy potatoes for tartiflette (ie potatoes that are not ideal for mashed potatoes). I used Red Rascal potatoes.

2 - Par boil the whole, unpeeled potatoes before baking them because potato bake with undercooked potato is not a pleasure to eat. You want them just barely tender and definitely not mushy or soft because they will bake in the oven too. The boiling time depends on the size of your potatoes. As mine were quite small 8 minutes did just fine but you may need to boil them for up to 15 minutes.

3 - I always boil my potatoes with lots of salt-for a 1kg lot of potatoes I use 2 tablespoons of salt. This seasons the potatoes perfectly all the way to the centre and you discard the water so all you end up with is perfectly seasoned potatoes. 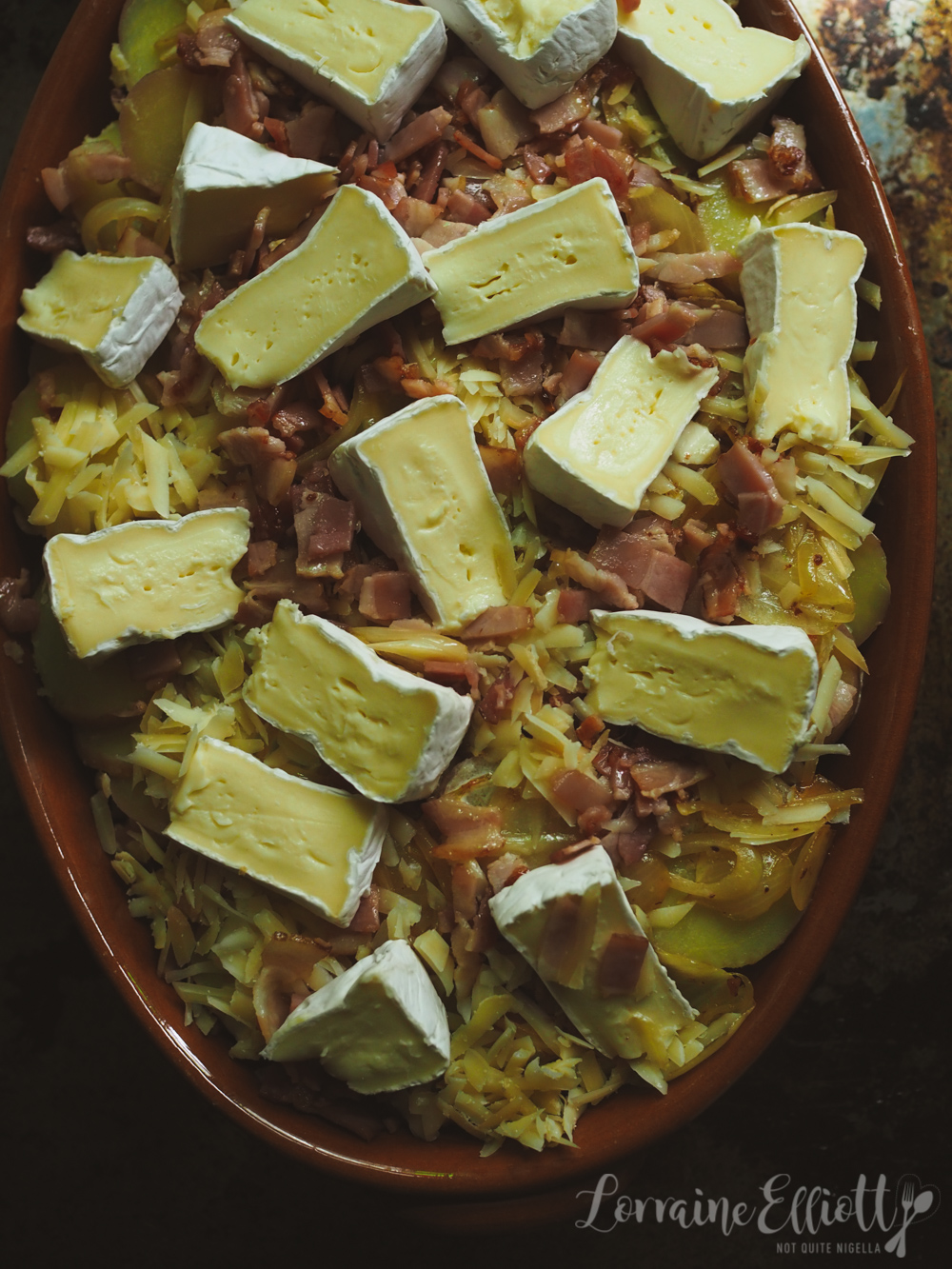 4 - Reblochon cheese is very hard to get a hold of here. You can use any soft cheese like brie or camembert but I suggest getting a double or triple cream cheese as you want one that is melty when heated.

5 - I use brown onions because they sort of melt into the background colourwise.

6 - You can make the components of tartiflette ahead of time and then assemble it and cook it on the day. It also reheats really well but I don't really recommend freezing tartiflette as it can get watery when reheating it.

While this has been the perfect cold weather food to eat (I've served it alongside the Perfect Beef Pot Roast) "Project Warm The House" has also commenced. We decided to get ducted air conditioning because weather is definitely getting more extreme nowadays. Keeping the house warm has been an absolute obsession this winter and we also discovered the one thing that was keeping our bedroom upstairs freezing cold. No matter how many heaters we would put on it never stayed that warm and the second that we turned them off the bedroom became arctic again.

I told Mr NQN that I was sure that the skylights were leaking (because during heavy rain I would feel tiny drops on me) but he didn't really do anything about it until one day I had enough. It was during the June/July crazy weather (the fourth crazy weather event of 2022) where the winds were cyclonic and the rain relentless. I suggested putting up something under the skylight. We taped up a garbage bag to prevent the rain coming through but then there was so much wind that it basically sucked the plastic back up and down violently. There was a mini tornado happening up in our skylights!

Mr NQN had a closer look while high on a ladder and took a video with his phone and showed me what he had found and it literally blew our mind.

The former owner, in yet another bizarre move (we often find all sorts of strange things), had installed skylights that had big metal vents around three edges of the skylight. The holes were so big that they were like the large holes of a cheese grater and the metal measured about a three inches wide. This was beyond the tiny weeping holes that you get (weeping holes which are tiny holes to let condensation out), these were enormous and it was absolutely no wonder that so much rain and wind were getting in. Mr NQN stuffed them with towels for the time being while we figure out what we can do with these. And ever since then the temperature was better in the bedroom just in time for yet another weather event...

So tell me Dear Reader, do you think that the weather is getting more extreme? And do you have any idea what those holes were for? 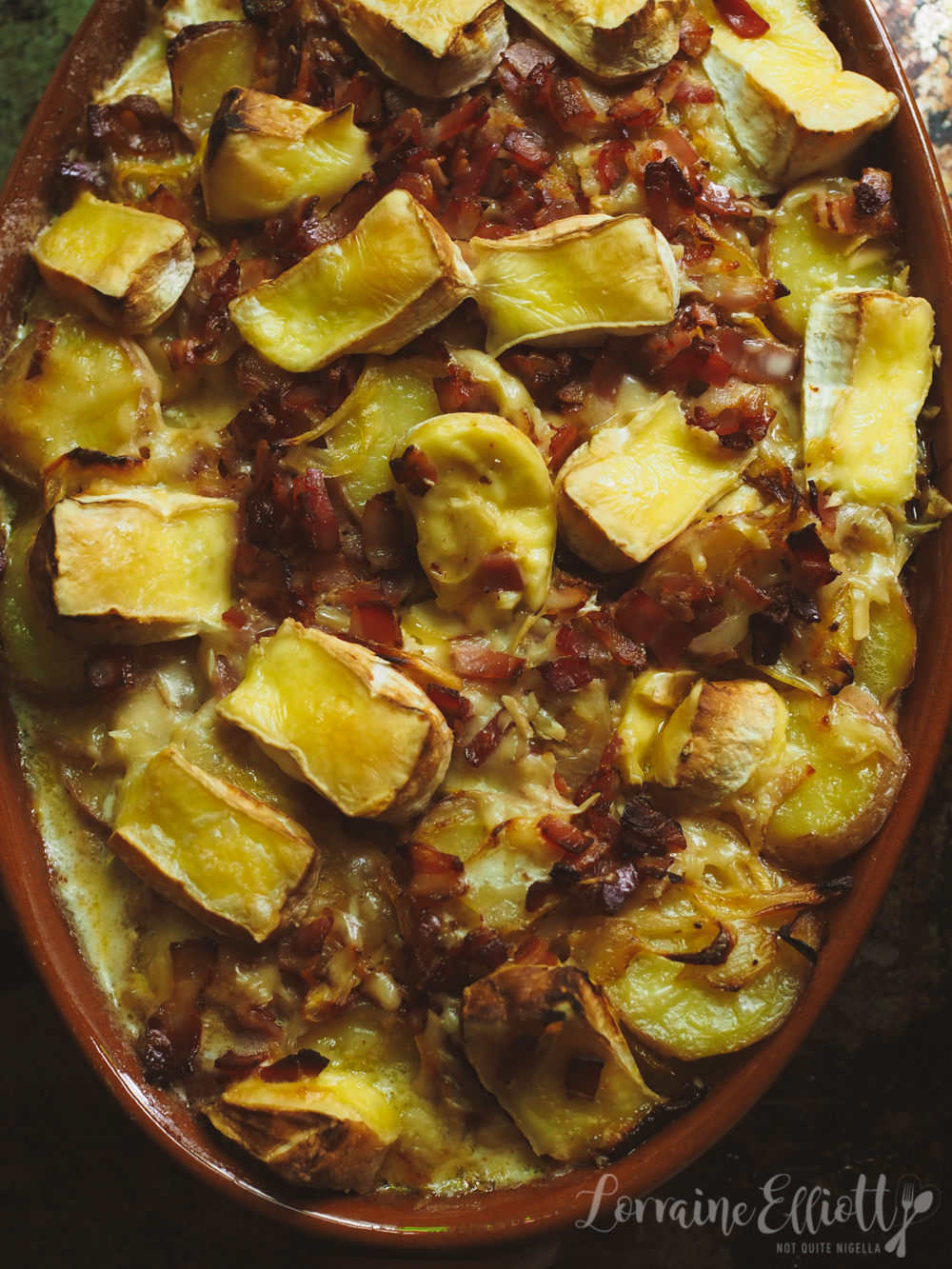 Serves: 6 as a side dish 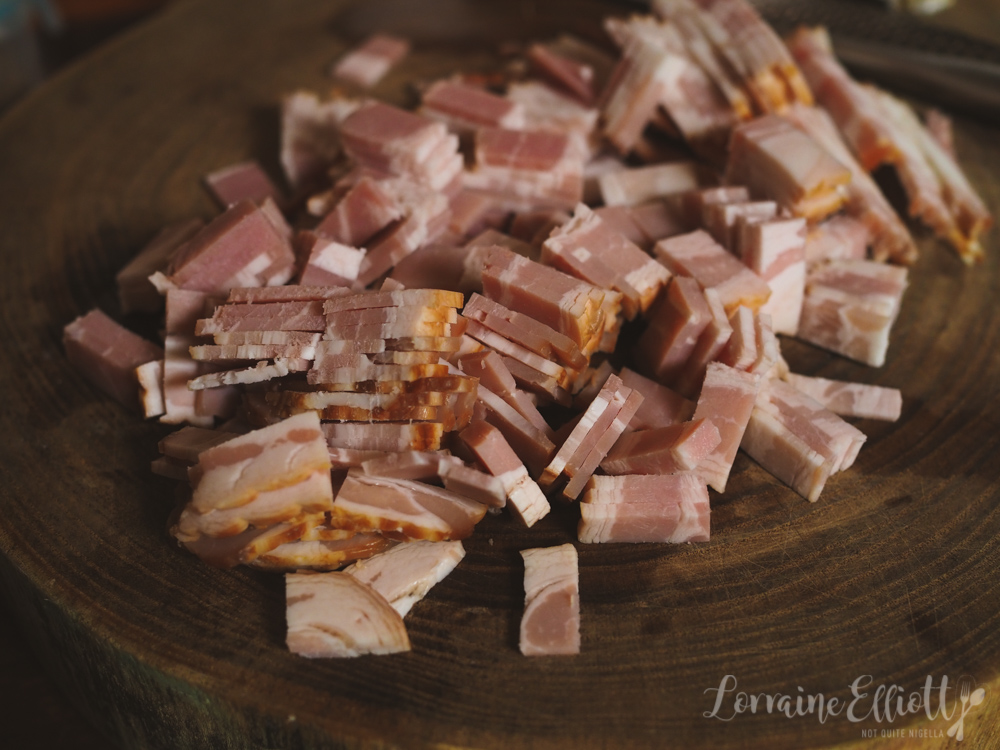 Step 1 - Preheat oven to 190C/375F and grease a large baking dish. First place the potatoes in a large pot and cover with cold water. Add the salt (don't be alarmed by the quantity of salt, it seasons the potatoes perfectly and you will discard the water). Bring to a boil and boil for around 8-15 minutes depending on the size of potatoes-my potatoes were quite small so 8 minutes was fine. You don't want them soft, just barely tender will do as they will also cook in the oven. Remove potatoes from the pot and allow to cool while you make the rest. 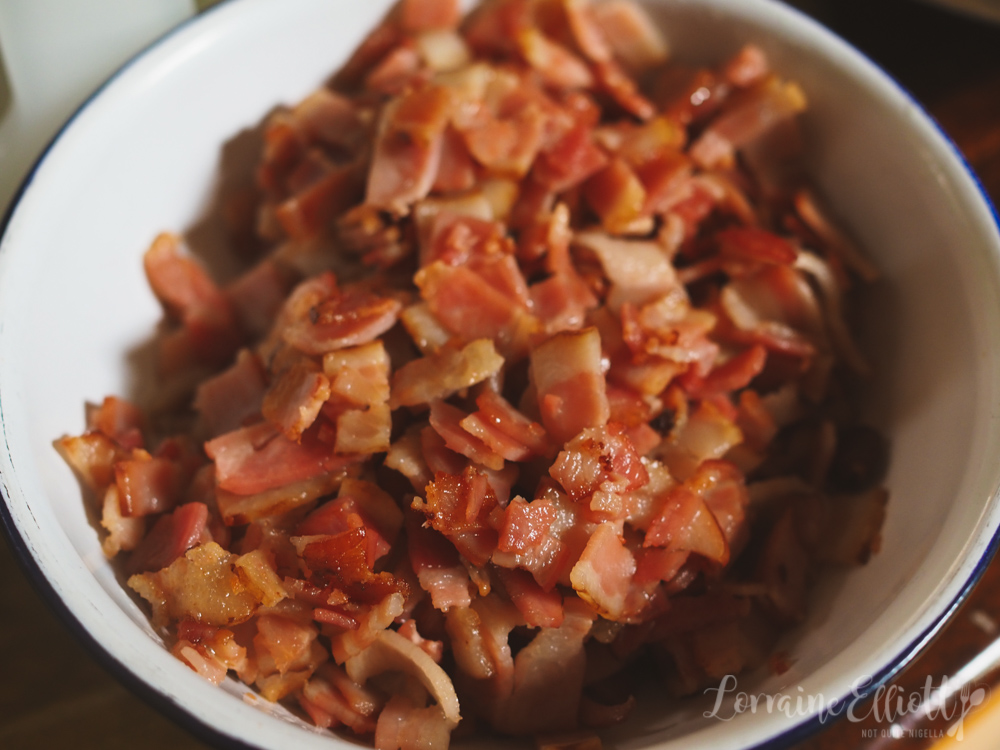 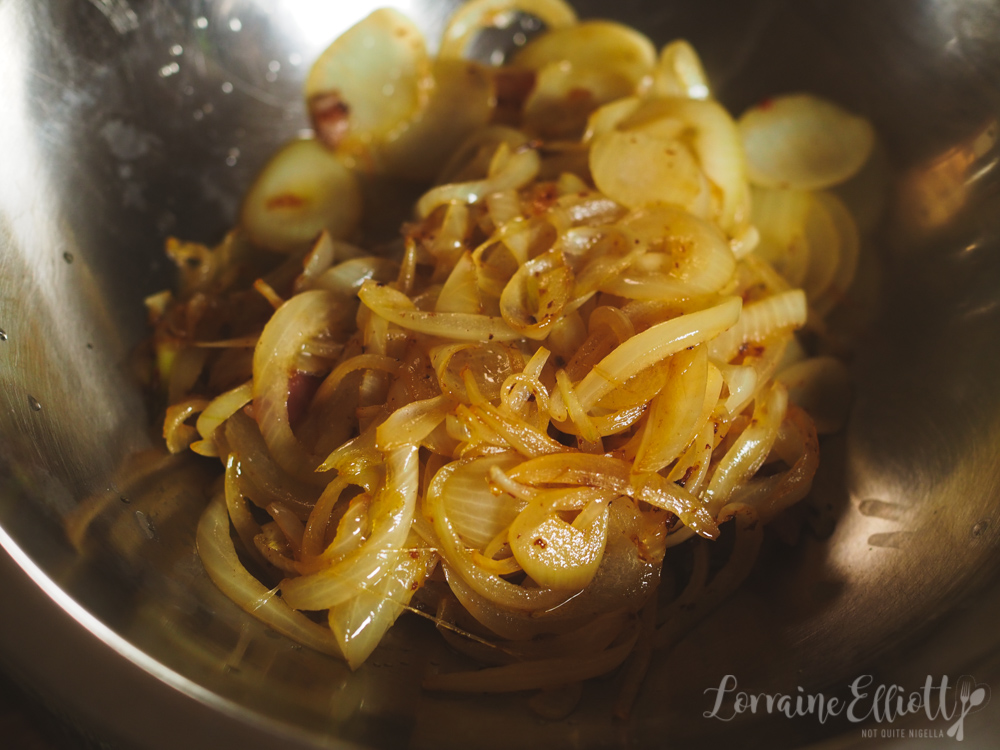 Step 2 -Add the bacon to a pan (I use the same pot quite because seriously who wants to wash up more?) and add a little butter if needed. Fry until crispy and remove from the pan and place in a bowl. Add the onions and fry them in the bacon fat on medium heat adding a bit of butter if needed-you want them soft and golden. Remove the onions from the pan and place in another bowl. Add the brandy (or wine or chicken stock) to the pan and deglaze the pan scraping off any of the tasty bacon bits. Pour this deglazing liquid into a jug along with the cream, chopped garlic, thyme and nutmeg. 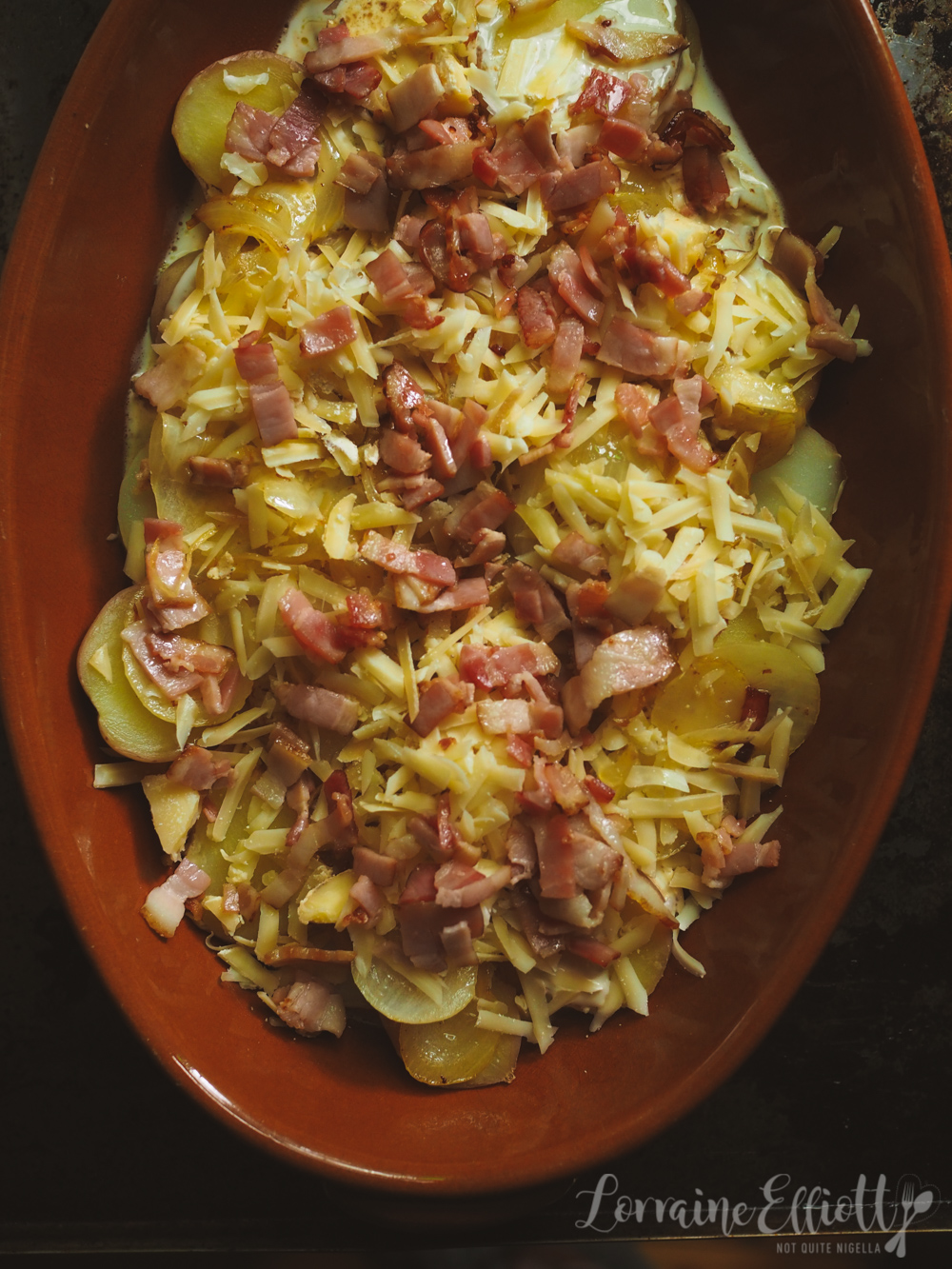 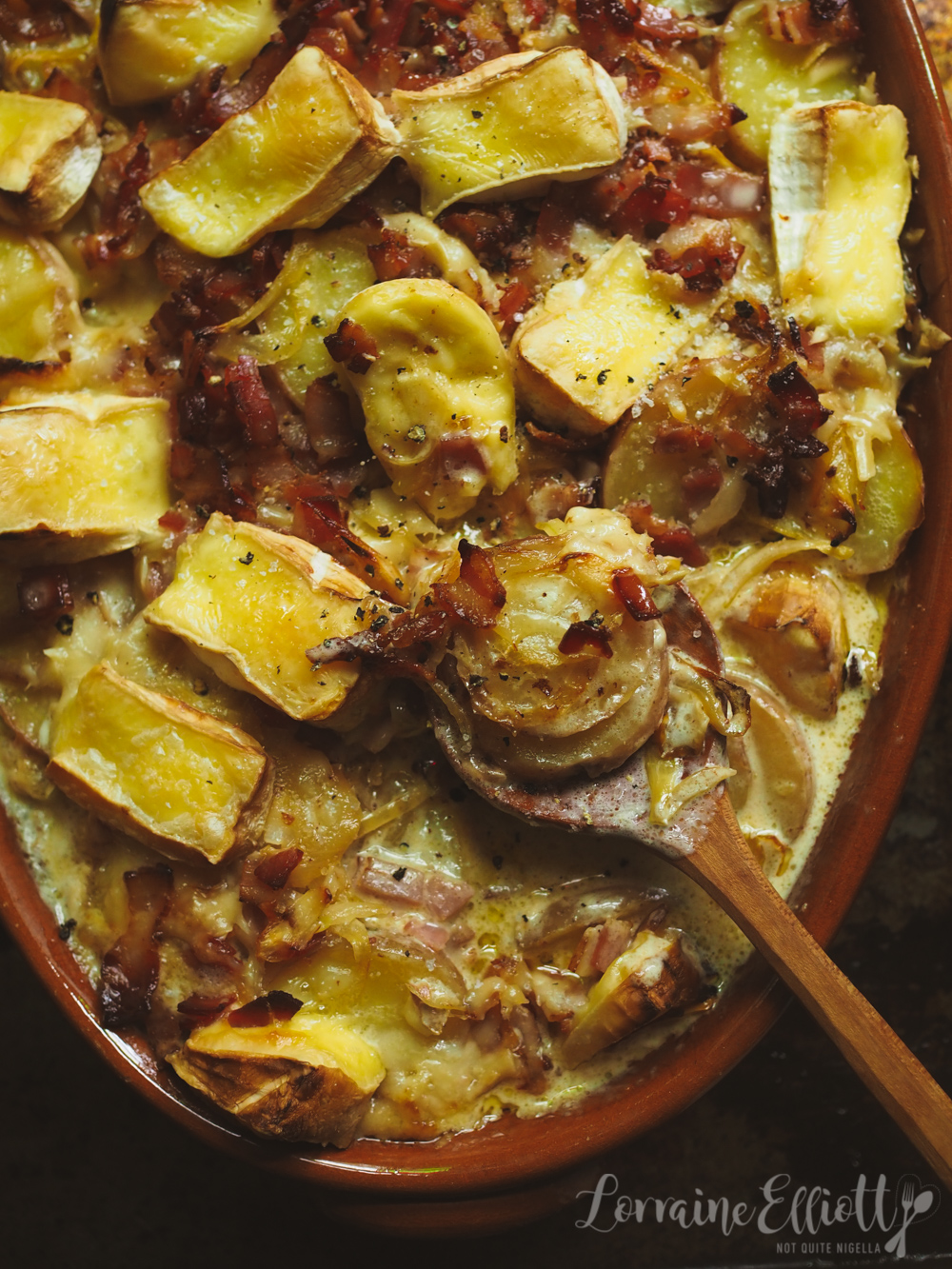