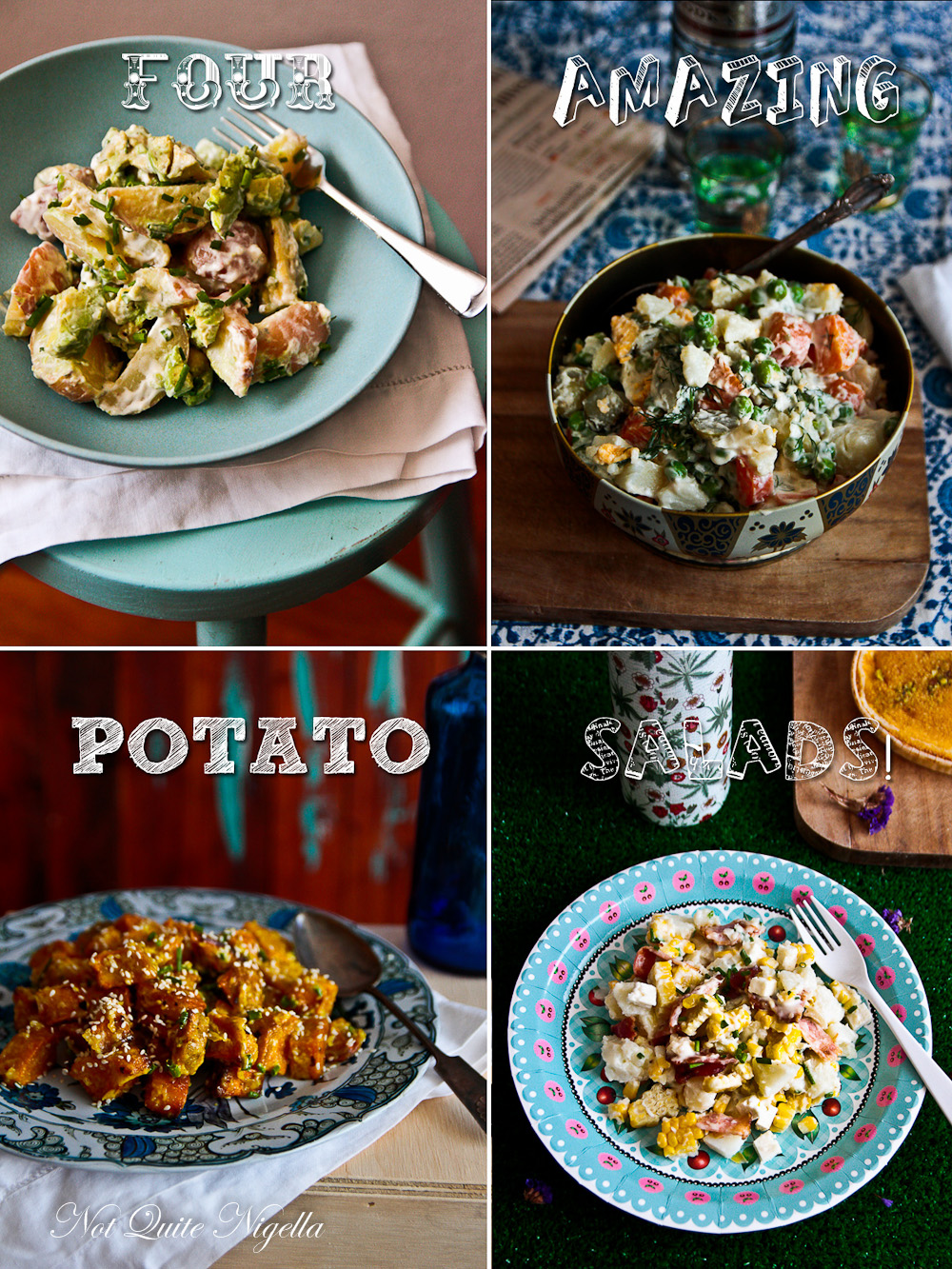 Recipes brought to you by Praise Whole Egg Mayonnaise

The other day I looked at Mr NQN and I wondered, "When did we become the couple that dressed alike? And when did we start wearing chunky sweaters?"

Yes Dear Reader, we had unwittingly become one of those couples. In our albeit weak defence, it came when we were travelling and had under estimated the chilliness of the weather so I kept borrowing his jumpers (aka sweaters) and somehow we morphed into the couple that wore chunky sweaters and dressed alike. I'm sure matching Christmas sweaters are in our immediate future.

When we first starting dating he used to become embarrassed at how much I dressed up. "Do you have to put on all that makeup and those clothes?" he would say while I was slathering on layers of makeup, elegant as a drag queen. He was always so sheepish at my excessiveness and acted as if I were entering a room atop an elephant. Eventually he came around to my excessive dressing. I dress for anything because I hate being under-dressed. Which is why perhaps people have mistaken me for a drag queen or show girl at times but I do love an occasion. 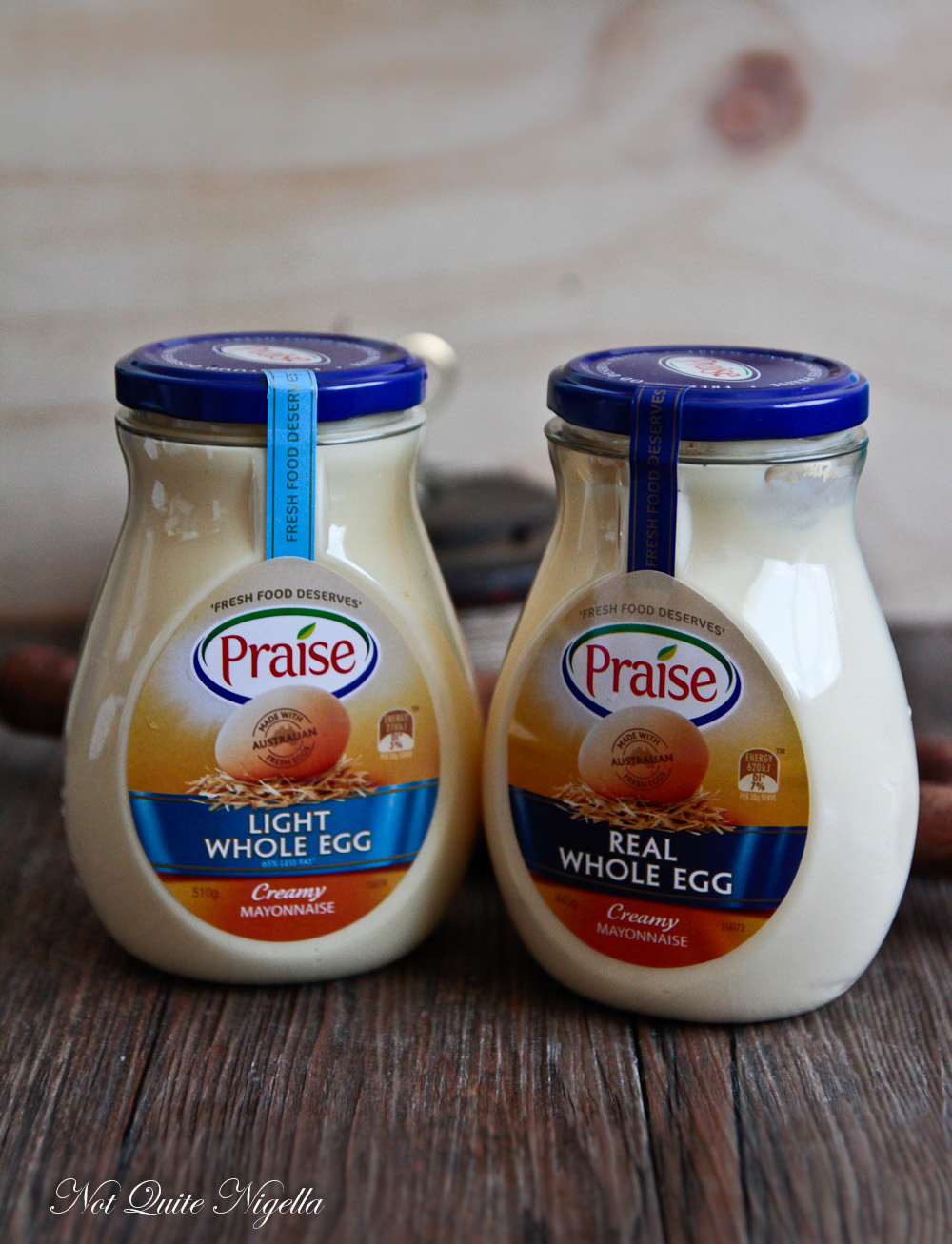 And speaking of occasions, did you know that potato salad is the single biggest volume occasion for mayonnaise? It's probably why I love it so much (I used to dip seaweed rice crackers in mayonnaise, don't judge me!). It's coming up to picnic weather and Christmas and potato salads are such an easy and crowd pleasing option and the nice people at Praise have asked me to share my favourite potato salad recipes. To create these recipes I used Praise Whole Egg Mayonnaise that is made with fresh Australian whole eggs - some brands even use powdered egg in their mayonnaise which just sounds strange indeed. Praise make a regular whole egg mayonnaise and a light version and both come in egg shaped plastic jars. Worth trying indeed. 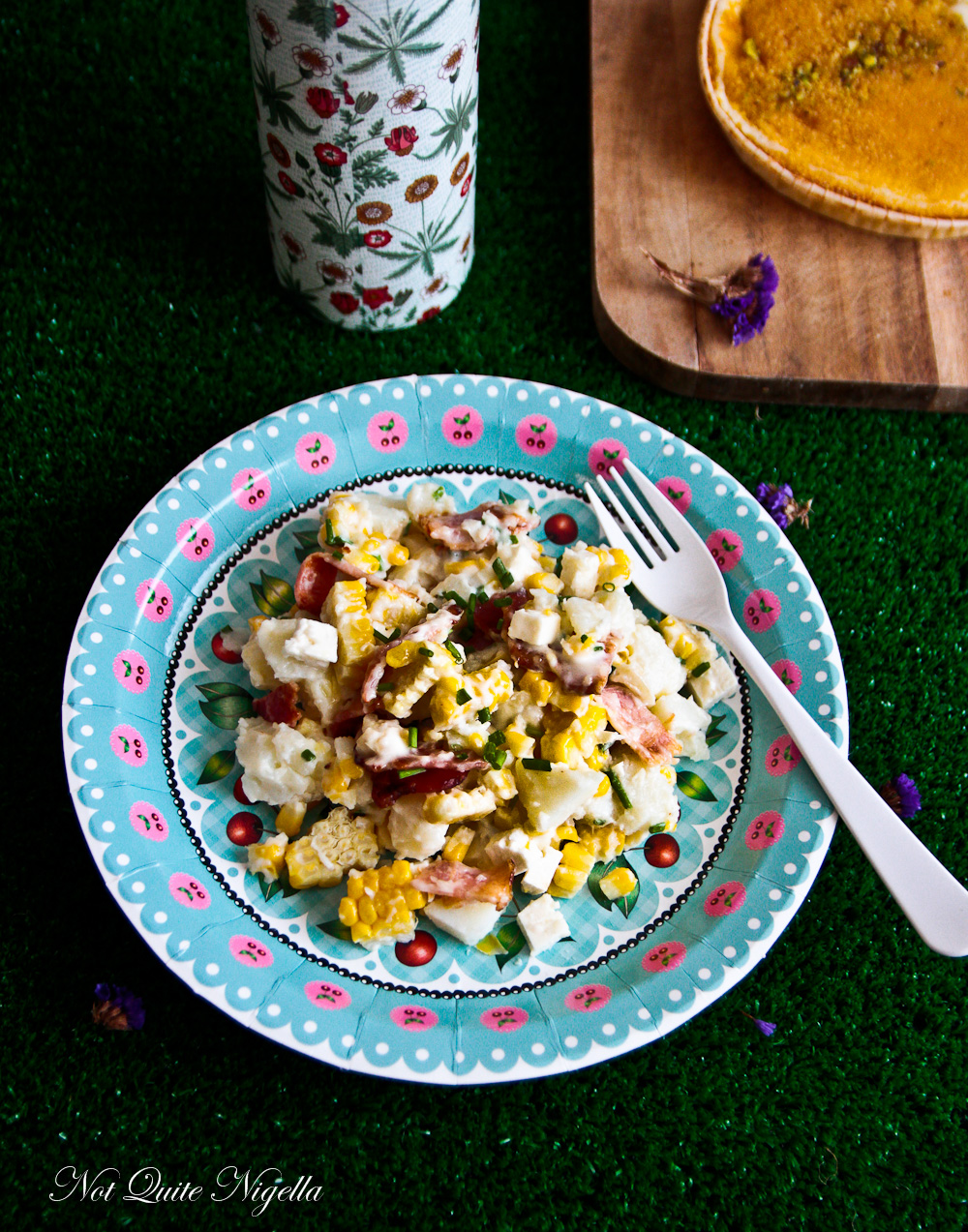 So what are these four potato salads? I am sharing with you my very favourite potato salad that has corn, bacon and feta because they are among my favourite ingredients in anything. I take this on picnics a lot because it is so popular and always gets eaten up. Secondly I am sharing a Russian potato salad that I grew up eating as several friends in High School were Russian. I have been meaning to make this for the blog for ages. It's one that I throw together if I have an excess of dill because I can never seem to use up a whole bunch before it goes limp. 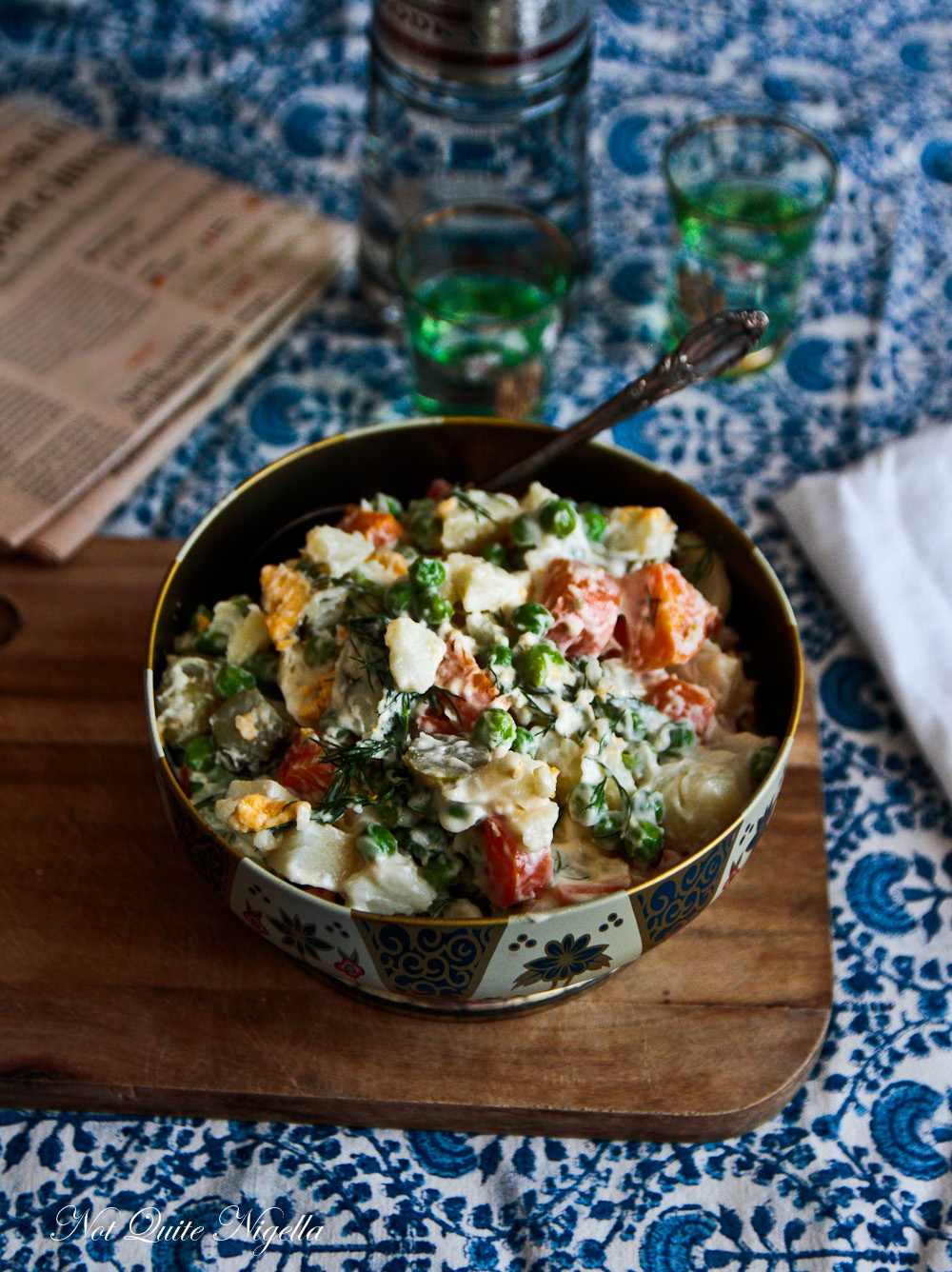 The story behind the Russian Olivier potato salad is full of intrigue and dishonour. It was named after the creator Lucien Olivier, chef at the Hermitage restaurant in Moscow. The legend goes that his much lauded potato salad was copied by his sous chef Ivan Ivanov. To guard the recipe Olivier used to make the salad by himself but was called away while in the midst of preparing it. Ivanov then stole into the kitchen to see what he was preparing and made an approximation of the salad based on what he could see. Once Hermitage closed, Ivanov started serving it at another restaurant under a different name and Olivier went to the grave with his recipe. 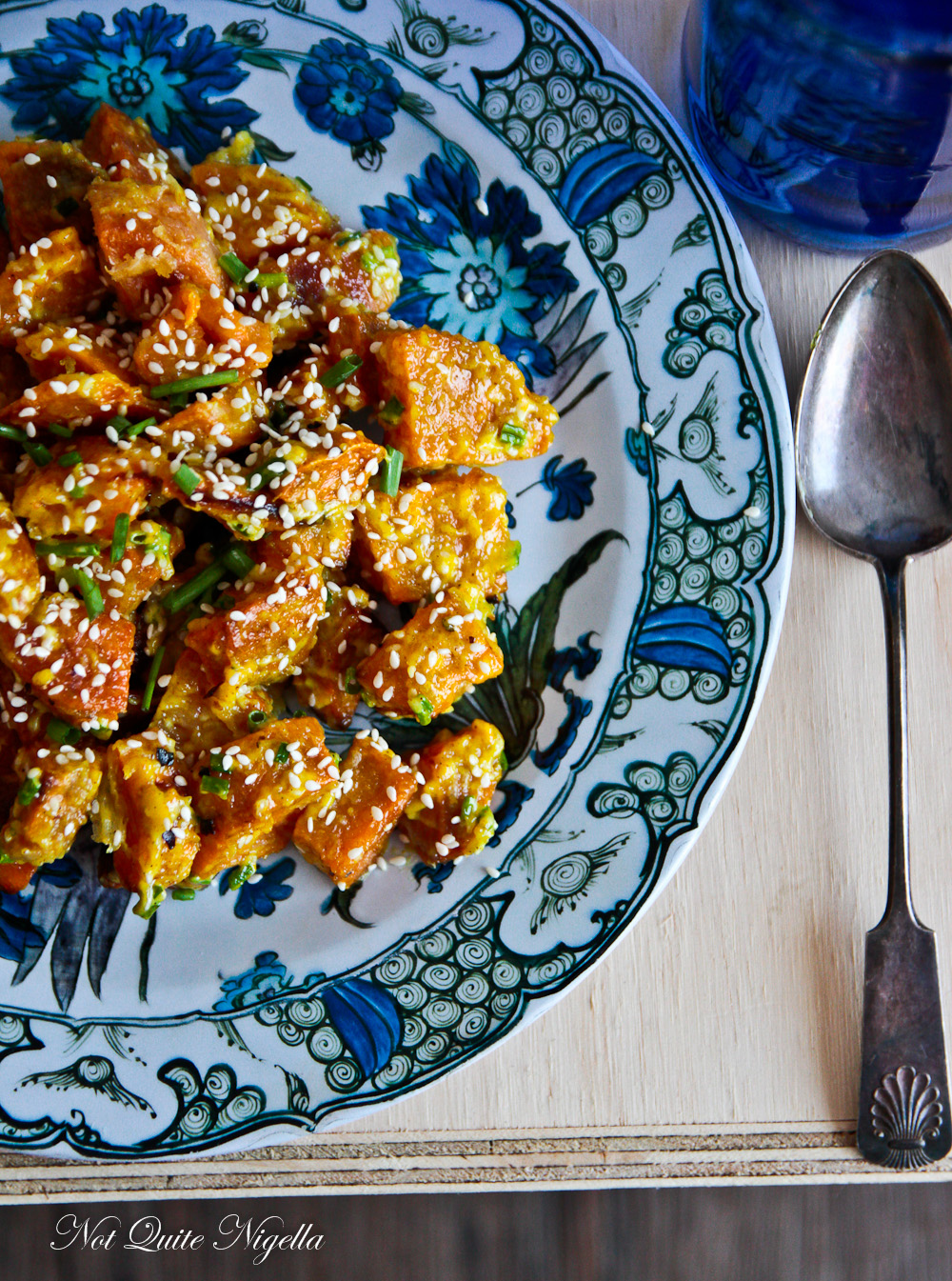 The third salad is a version with sweet potato (see what I did there? I used another potato -sneaky! ;) ). The flavours for this are decidedly Asian with sesame and sweet potato but for this salad, the sweet potatoes are roasted so that they are sweet and caramelised. Isn't caramelised a fabulous word? I'd like caramelised as my middle name... 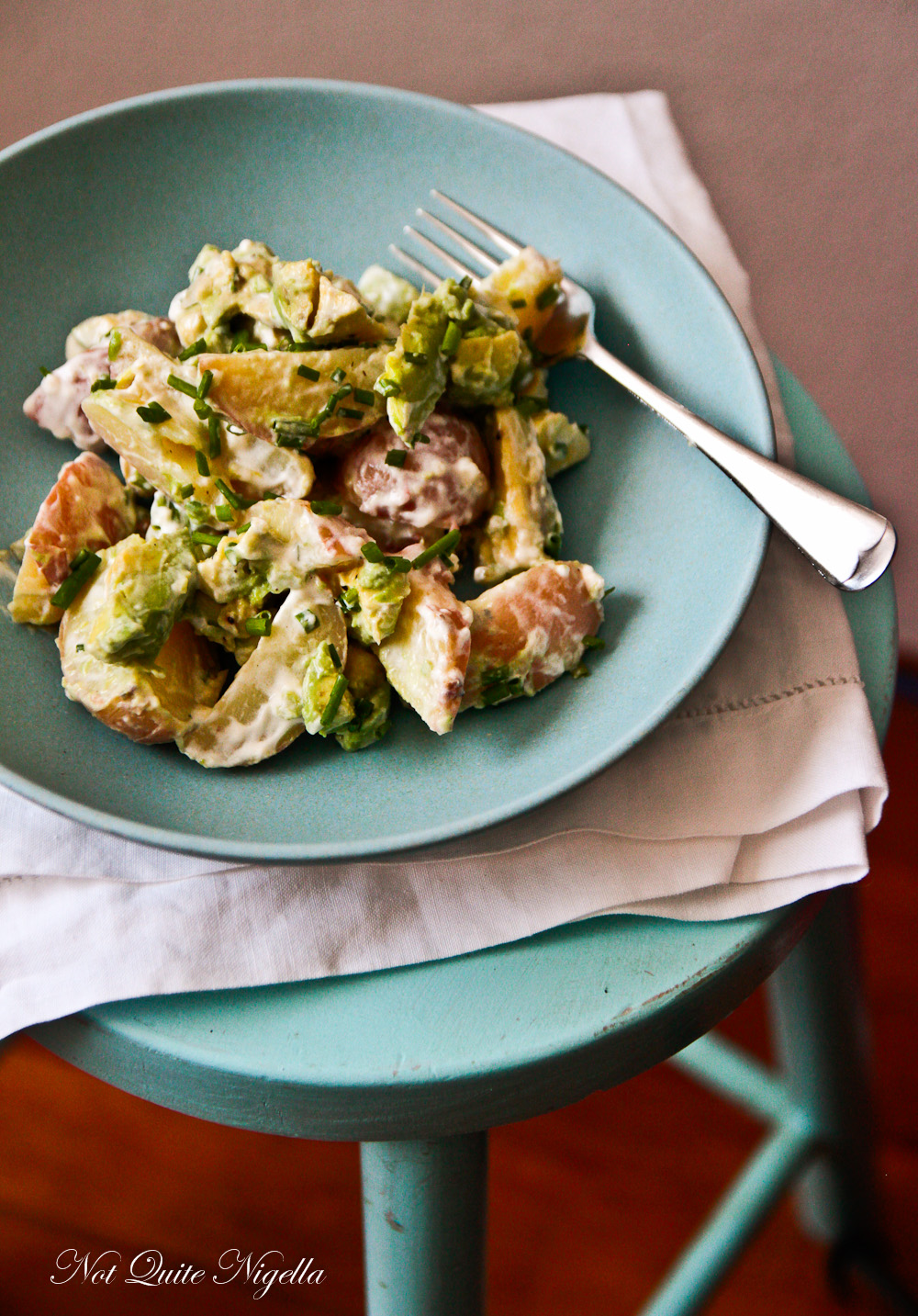 And for all of us that are trying to eat a bit healthier the last salad is a healthy potato salad with chunks of avocado and celery for crunch. I used the Praise Whole Egg Light Mayonnaise for this that actually doesn't taste that different to the regular one and has 65% less fat. I hope you'll find at least one or maybe four that you will like as much as we did!

Anyway, after being horrified at the chunky jumper situation, I am pleased to report that I am now back to normal. Normal being of course a relative term ;)

So tell me Dear Reader, do you find yourself undressing, over dressing or dressing just right for occasions? And what is your favourite kind of potato salad? 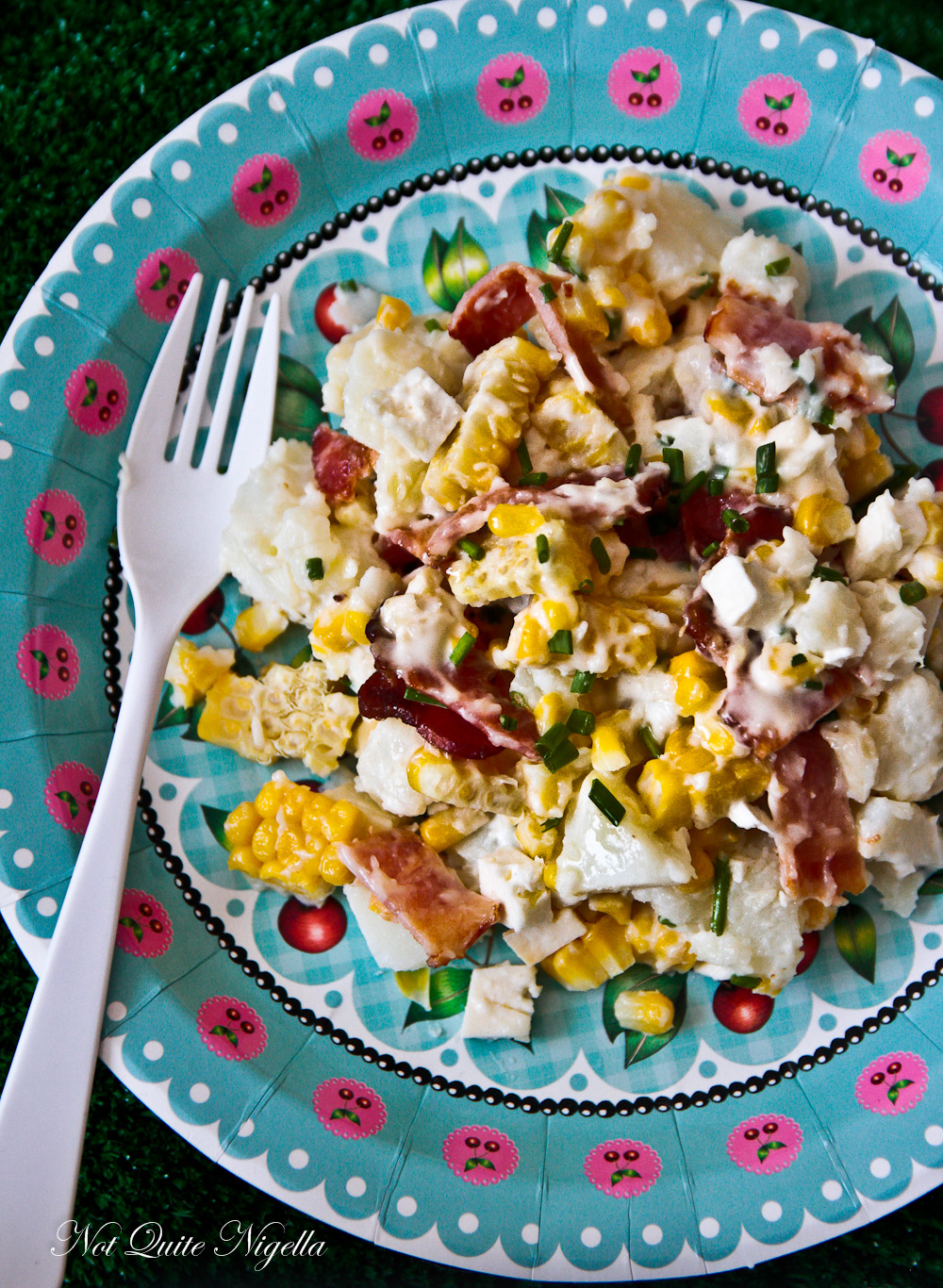 I call this my picnic salad and I love it because it has bacon, feta and corn. The bacon and feta give the salad lots of flavour and savouriness while the fresh corn kernels add juiciness. It is also Mr NQN's favourite salad of the four which was a surprise because he isn't a fan of corn off the cob. I know, how specifically weird is that? I think he might be part beaver or something...

Step 1 - Boil the potatoes in their skin until tender. While the potatoes are boiling, grill the bacon until crispy and drain on absorbent paper. Cut into small pieces and place in a bowl. 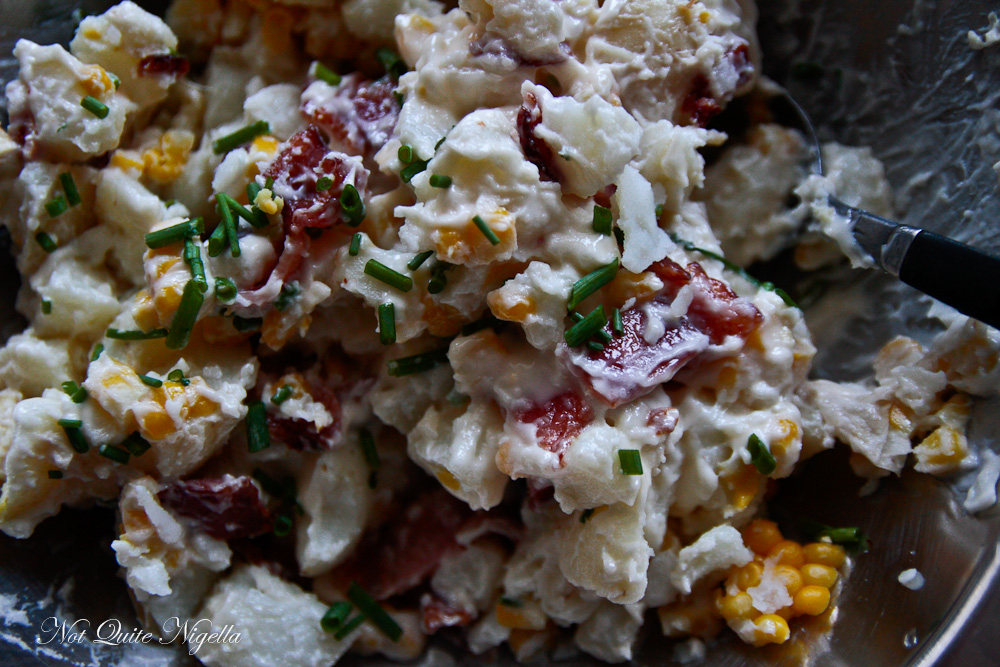 Step 2 - When they are done, drain and cool the potatoes. Peel the potato skin off with your fingers or a peeler and cut into small pieces and place in the bowl. Remove the kernels from the corn and add them to the bowl of potatoes. Mix the mayonnaise and sour cream together and toss the salad in the dressing. Add chives and season with salt and pepper. 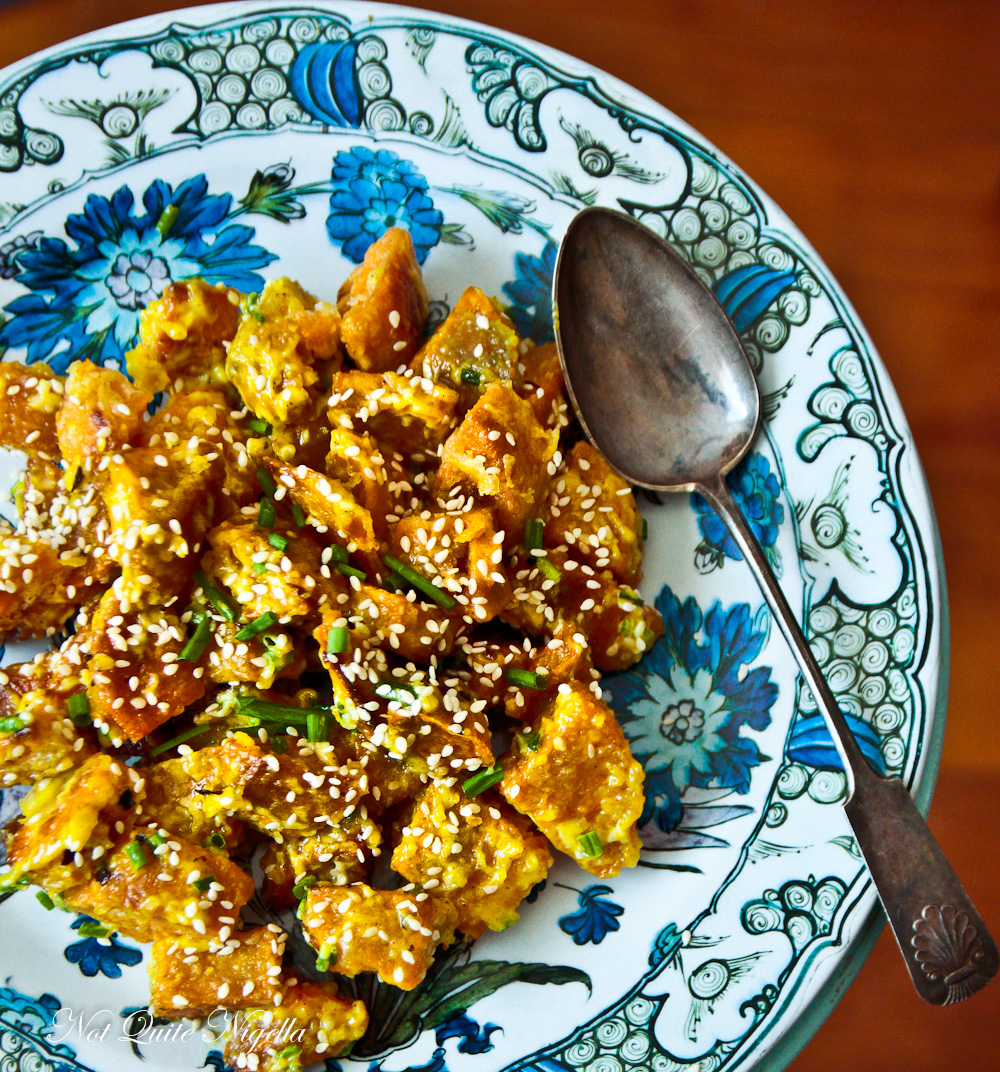 This is a bit of a curveball because it is sweet potato rather than potato but trust me in that this is really good especially with the chilli and sesame to add to it. You could even swap the sweet potato for regular potato and it also works. 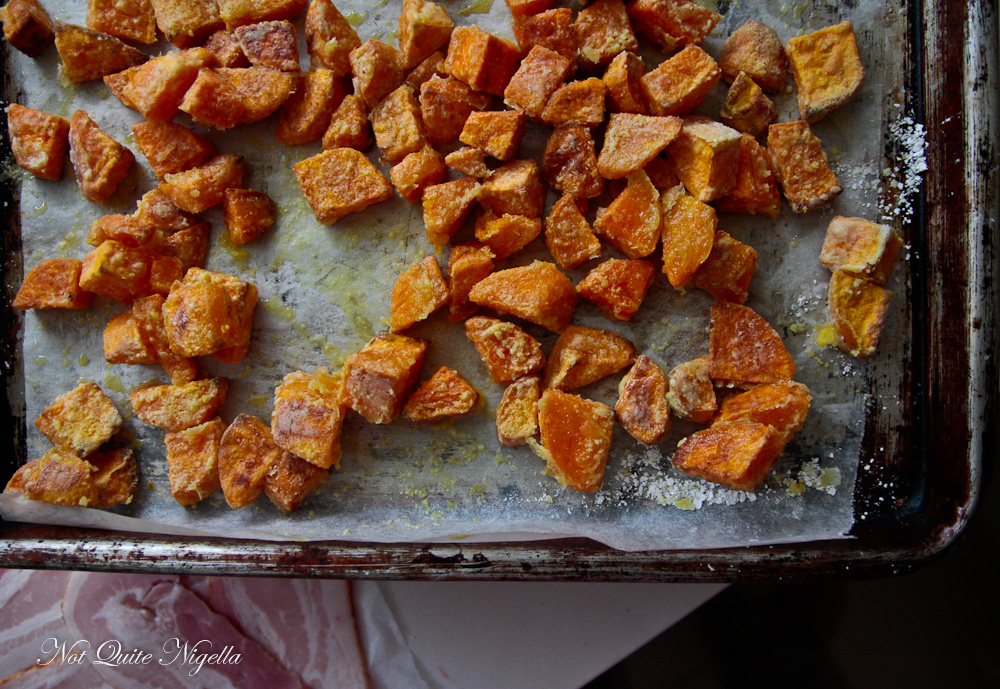 I see you there bacon, photo bombing the sweet potato!

Step 1 - Preheat the oven to 200C/400F and line a tray with parchment. Cut the sweet potato into small bite sized chunks and drizzle with oil. Bake for 30 minutes until cooked through and golden (I put tossed mine in some cornstarch in the pics but I don't think that this worked as well as I wanted so I've omitted the cornstarch in the directions). Allow to cool.

Step 2 - Whisk the mayonnaise, curry powder and sesame oil in a bowl. Toss the sweet potato in this mixture and add the sesame seeds, chives and red chilli flakes. Season with salt and pepper. 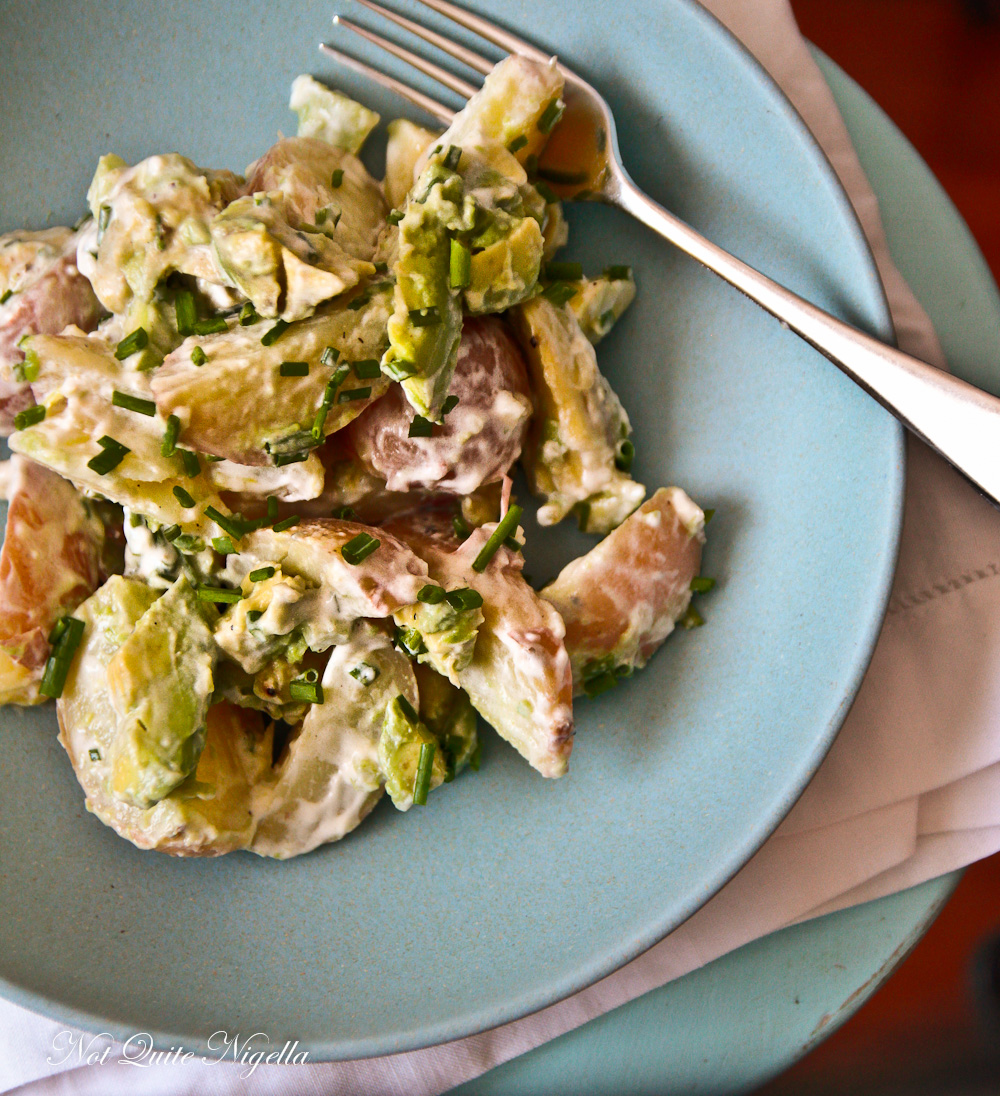 I know, I had to do it right because so many of us are trying to eat a bit healthier with summer coming up. I added the avocado for more creaminess and mixed the Praise Light mayonnaise with natural yogurt so that it is super light but still creamy. Because life without creamy is just sad ;)

Step 1 - Boil the potatoes in their skin and then drain and allow to cool. Leaving the skins on, chop them into pieces - I cut them into larger slices about the size of a mandarin segment, just for something different. Chop up the celery into small moons. Mix the mayonnaise and yogurt together and toss everything together.

Step 2 - Then cut the avocado in half and remove the pit. Drizzle each half with lemon juice on top of then slice it up and toss that in last (just in case it is very ripe, you don't want it to go mushy). Sprinkle with chives, salt and pepper. 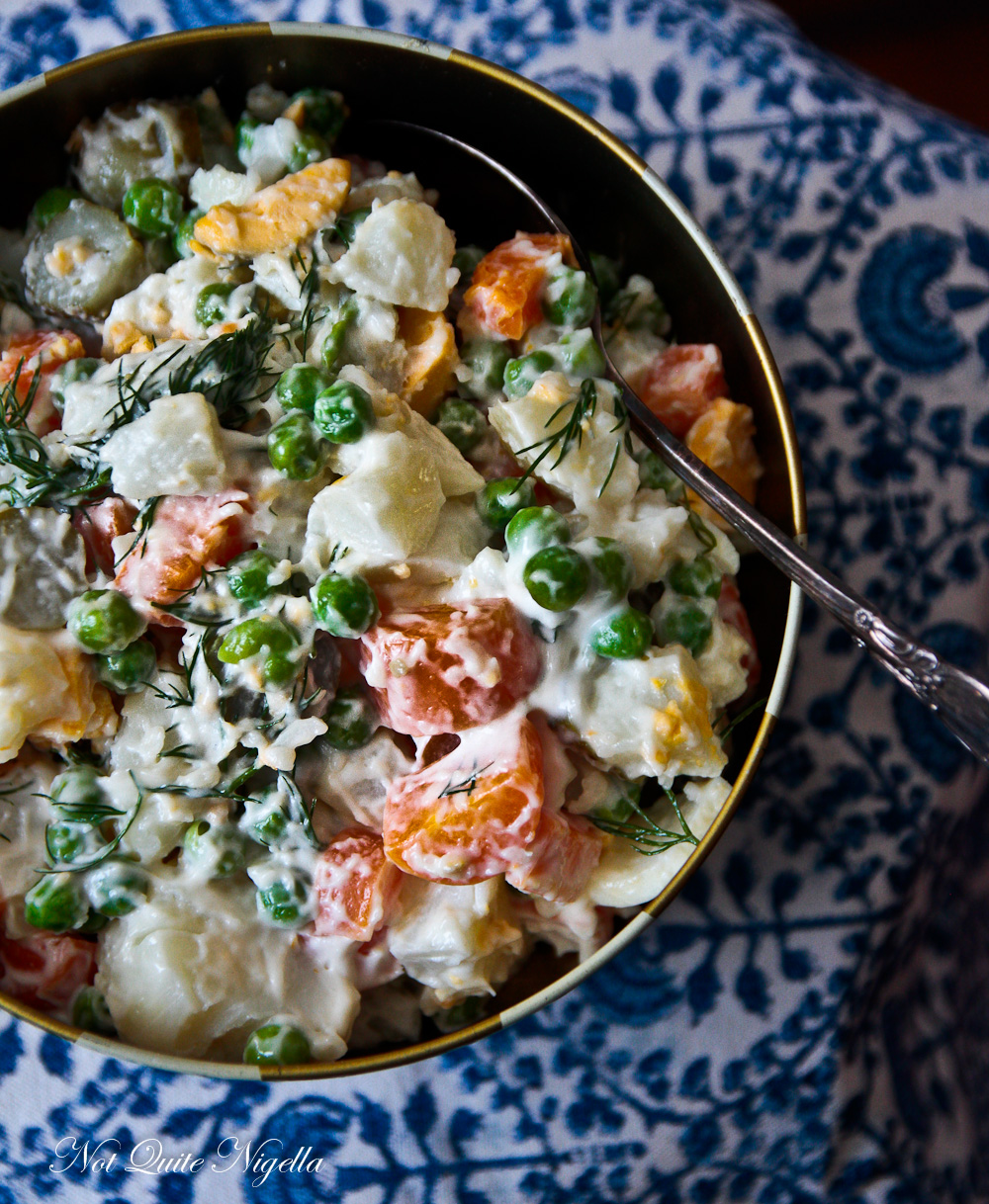 I always think of my Russian friends in high school because their mums always plied us with this as an after school snack. Some recipes also suggest adding cooked chicken breast but I've left it out of this because this is exactly how my friends's mums made it but if you want to, add one chopped, cooked chicken breast to the mix. I'm sure Lucien Olivier would approve, as long as you continued to call it after him and not Ivanov! 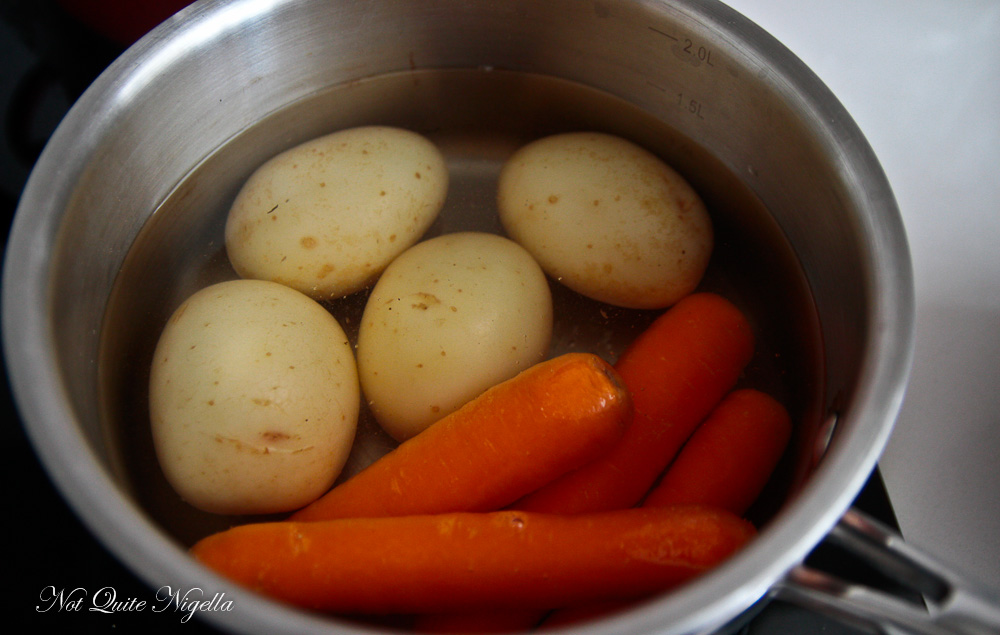 Exciting pic, I'm sure you couldn't have envisaged what carrot and potatoes look like in a pot huh? ;)

Step 1 - Leaving the skin on, boil the potatoes and carrots until tender. Drain and allow to cool completely. Chop up the potato, carrot, boiled egg and pickles into even sized pieces (make the pickles a bit smaller) and place in a bowl with the peas. Add the mayonnaise and dill and toss. Season with salt and pepper.