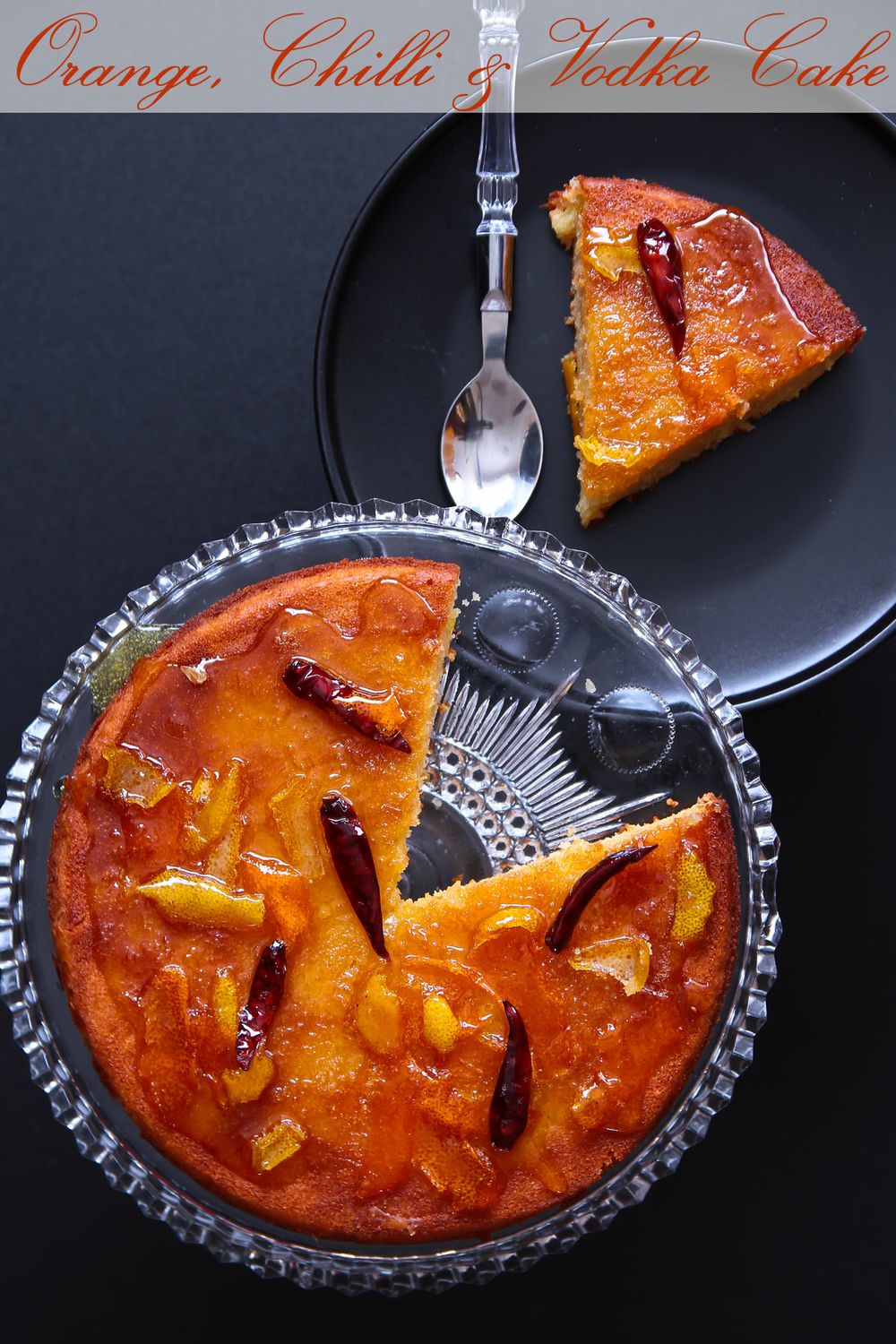 My sister is one of those people that shops for food every day. The reason is that she doesn't like having tempting food in the house for fear of being enticed. Chocolates, roast potatoes, cakes...they're all an edible manifestation of a come hither look.

Fortunately, I'm not particularly vulnerable to food. As much as I enjoy it, I can take a bite and them leave it be (although taking a bite of something is a compulsion in itself). I have cupboards full of chocolate, champagne and other temptations. They don't worry me at all, but suddenly, I knew exactly how she felt with this cake in the house.

I had already forked a mouthful from the slice that I had cut for the photo...and then another and another. My custom was to leave the cut piece to Mr NQN who would gleefully suck down each crumb as if he were a cavernous vacuum. But suddenly bites were disappearing quicker than I could comprehend, the moist crumbs sliding down my throat at seemingly warp speed. And before I knew it, the slice was gone.

"Just another little little bit!" I trilled to myself, taking the knife and cutting another sliver. That sliver was savoured more seriously. Then, the fork sprang to life in my hand and I started vertically forking little bits off the edge of the cake giving both cut edges a jagged finish to them. I surveyed by handiwork wiping off any crumbs.

"Hmmm I might have to straighten it up now!" and I cut off the edges straight with the knife and then popped the slices in my mouth. With the cake rapidly disappearing and with no end in sight, I quickly cut a large wedge for my parents, a large one for a friend that I was seeing that night and wrapped the remaining single piece and stowed it in back in the depth of the freezer. Like the Tell-Tale Heart, I heard creaks from the kitchen (or perhaps it was the neighbours coming home from work) but I resisted. Until the next night, of course.

The point of my story? Do not make this cake unless you have people to share it with. Or make it if you are alone and simply don't care if you eat half a cake. It's that delicious. 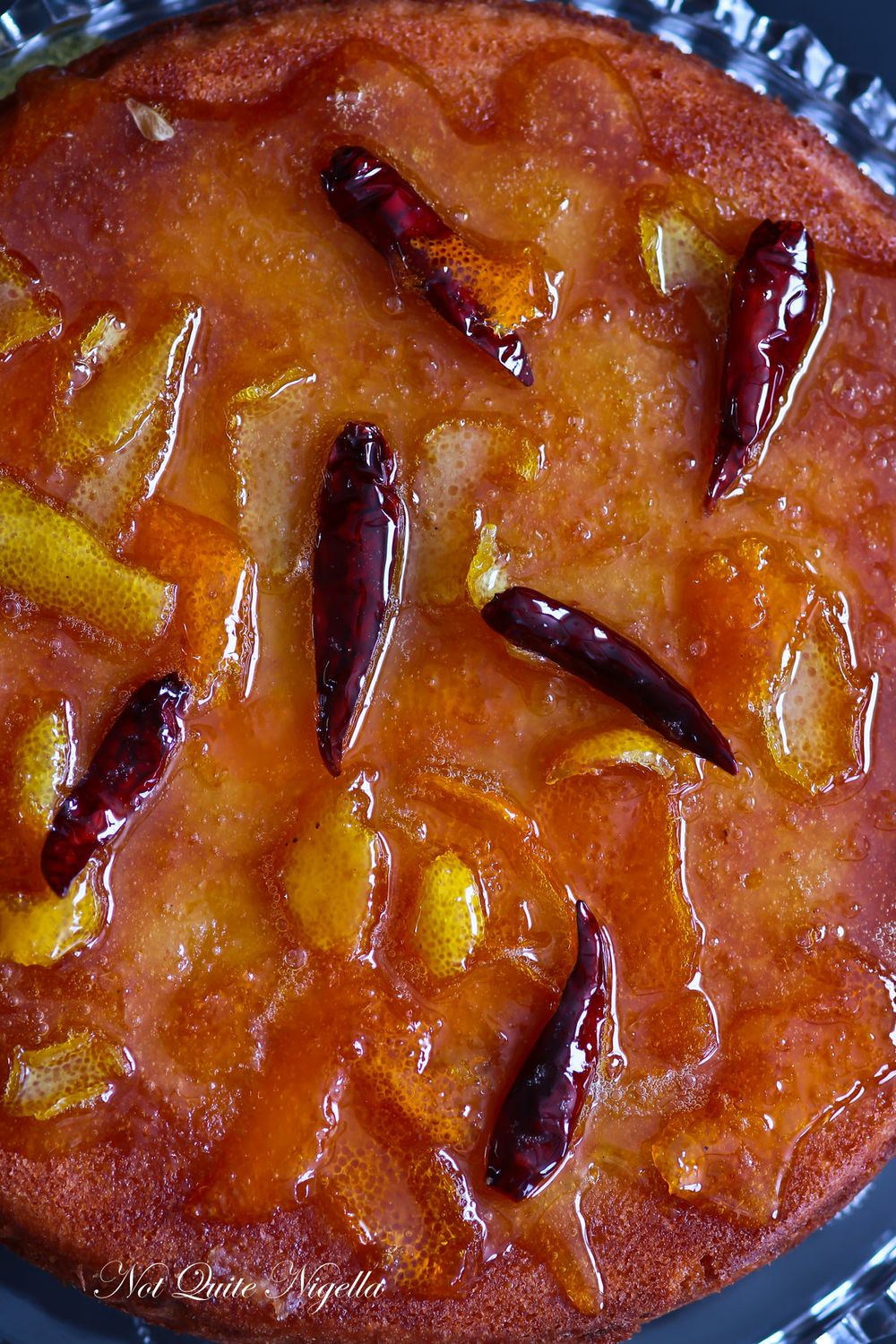 The cake was a recipe I first saw in the new SBS Feast magazine. It caught my eye simply based on the name -  could sticky orange, chilli and vodka be the perfect cake flavour? It was a cake baked with almond meal and a little flour and then drenched in a sticky glaze of orange, dried chillis and vodka.

The recipe is by Sybil Kapoor and appears in photographer David Loftus's Around the World in 80 Dishes book. I adjusted the recipe, particularly the syrup proportions as the original recipe called for just 30 grams or 1 ounce of sugar which didn't produce much of a syrup given the liquids and appeared a bit too wet for the cake.

Adjusted, the cake is as heavenly as it sounds, moist and full of orange flavour with a delicate crumb. The effect that the vodka and chilli imparts is mild(unless of course you eat a whole chilli). The vodka  is cooked off and I used mild dried chillis so the predominant flavour is of citrus. It is the kind of cake that you really shouldn't have in the fridge for fear of polishing it off in the middle of the night, Nigella style, while convincing yourself that there is so much fruit in it that it must somehow be sort of healthy...

So tell me Dear Reader, are you able to resist delicious goodies in the fridge or pantry or do you keep them at a minimum to avoid falling into temptation? 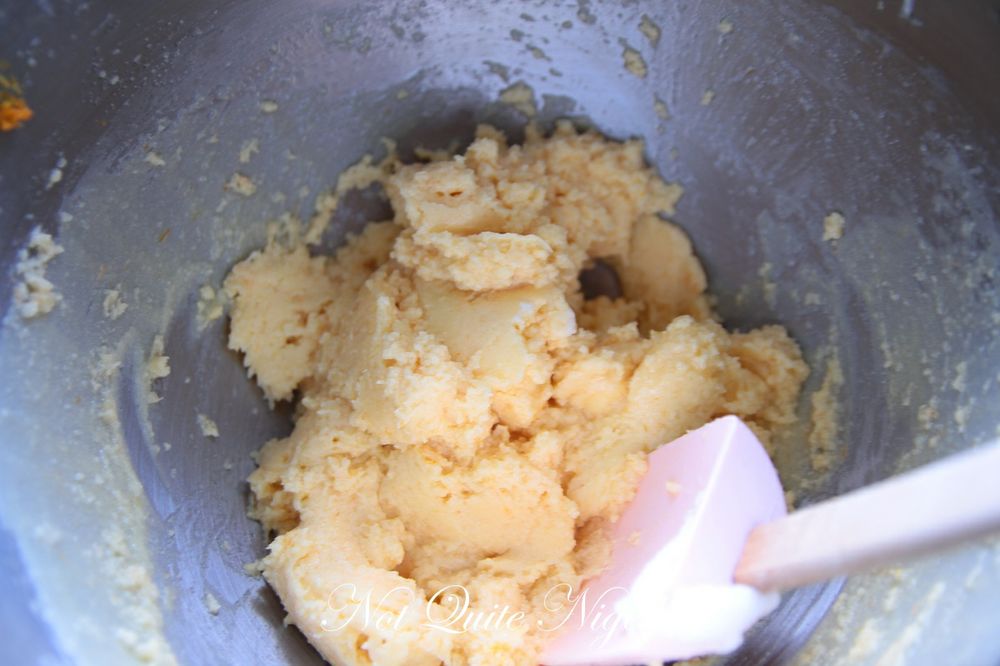 Step 1 - Preheat oven to 170C/340F. Line a 20cm spring-form tin with parchment paper on the base and sides. Beat the butter and sugar until pale and fluffy. Finely grate the rind of one orange into the butter mix and beat lightly, then add the egg yolks, one at a time and then the dessert wine. Add the flour and almond meal in two batches of each alternating between flour and almond meal. 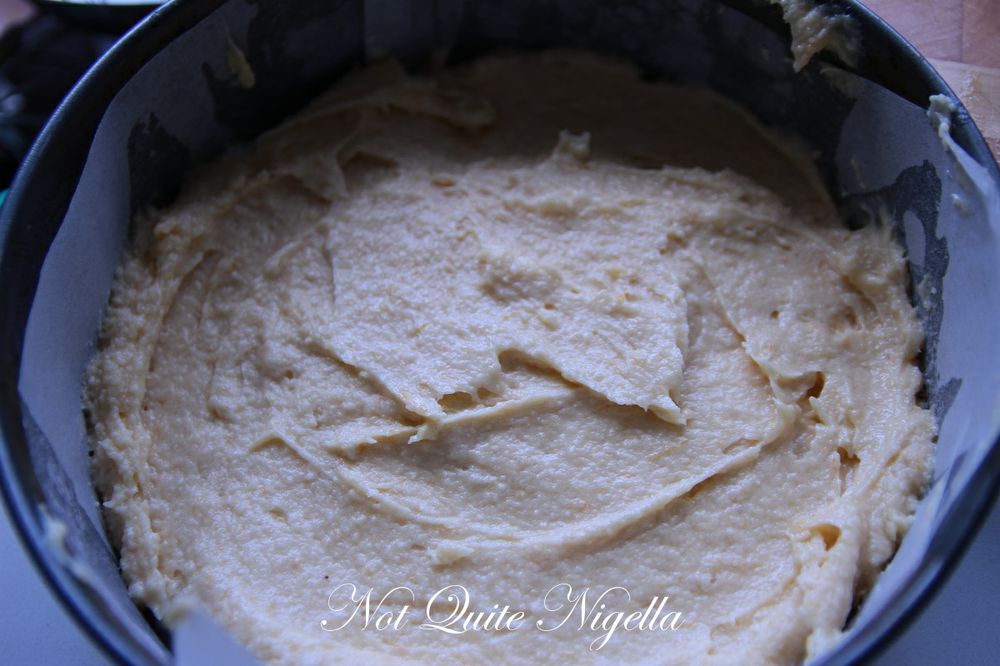 Step 2 - Whisk the egg whites with a beater until you reach stiff peaks and then fold this into the mixture in two lots-the wet mixture is already quite heavy so you will end up deflating the cake mixture a bit but try and fold it in if you can. Spoon into the prepared tin and bake for 45 minutes or until a skewer inserted comes out clean. 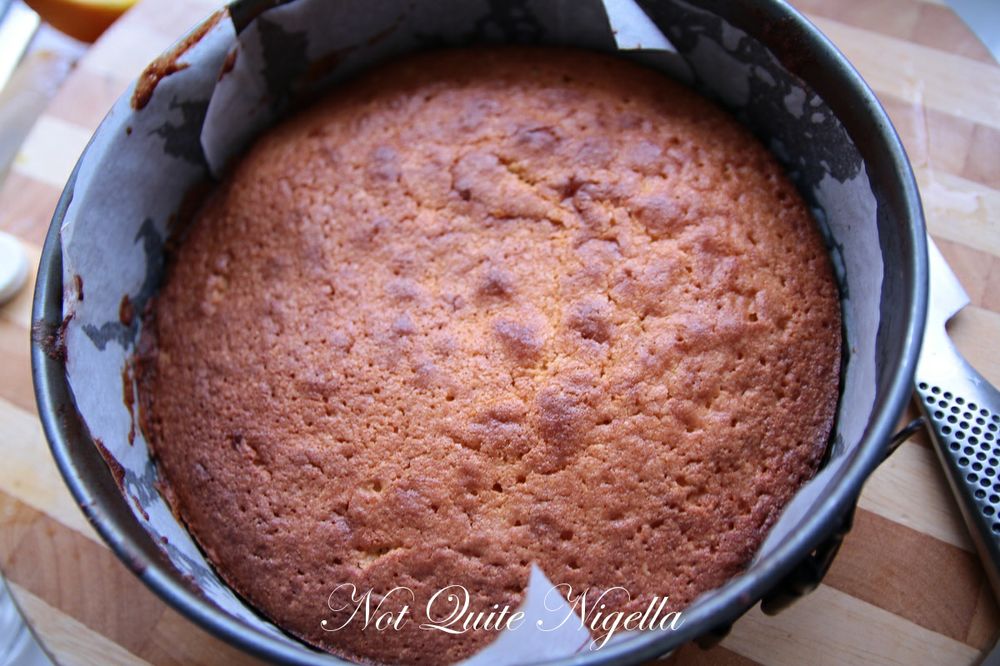 Step 3 - About 15 minutes before the cake is finished, start on the syrup. In a small saucepan add the water and sugar and the peeled zest from the remaining half oranges and the lemon. Juice the oranges and lemon and add this to the sugar and water. Add the chilli and vodka and stir until sugar dissolved and then boil rapidly for about 5 minutes until it becomes a thick syrup. Keep the syrup warm and infuse the flavours until the cake is ready. 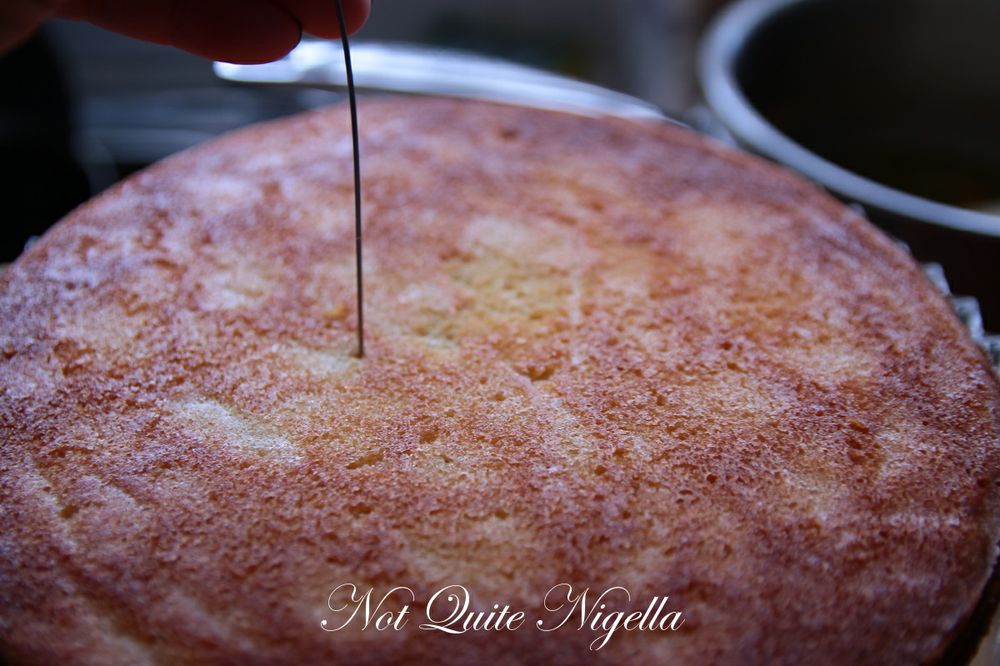 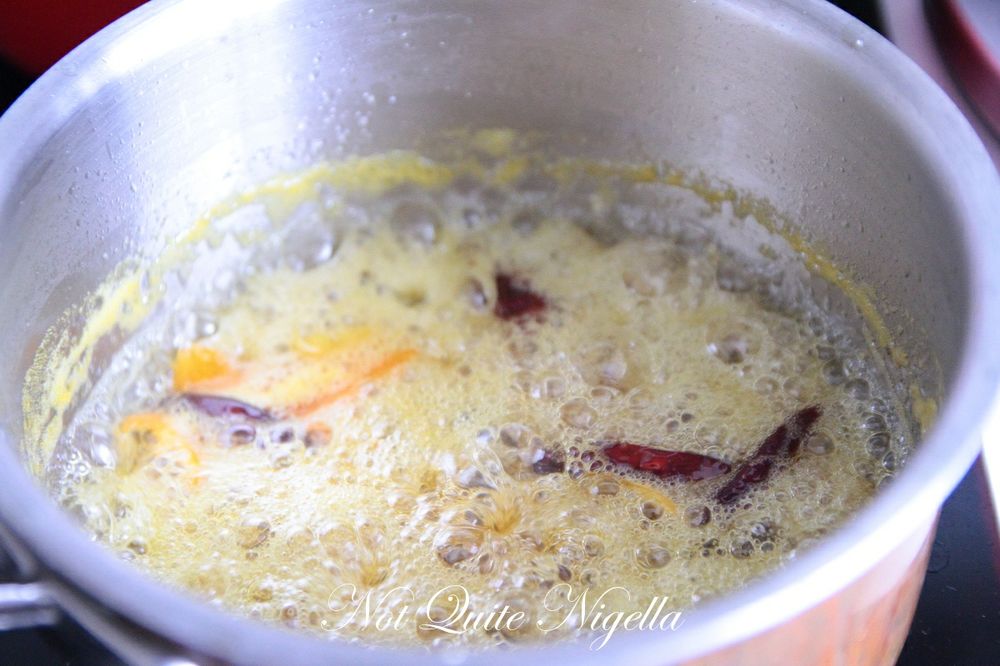 Step 4 - Remove cake from oven and place bottom side up on a serving plate. Prick all over using a skewer and while hot, spoon over the syrup, peel and chillis. Serve warm-the syrup will have seeped into the cake making it moist and sweet. 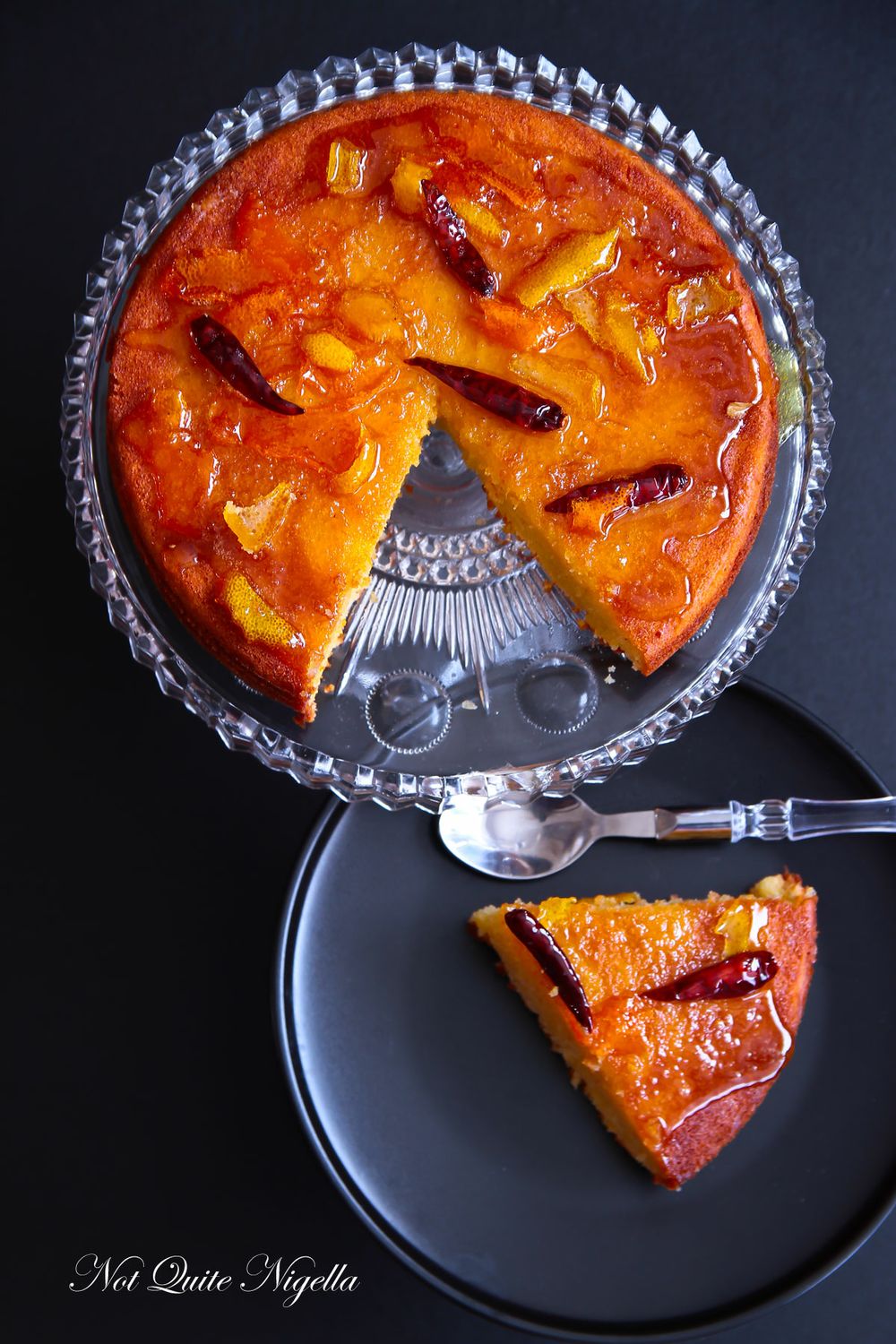