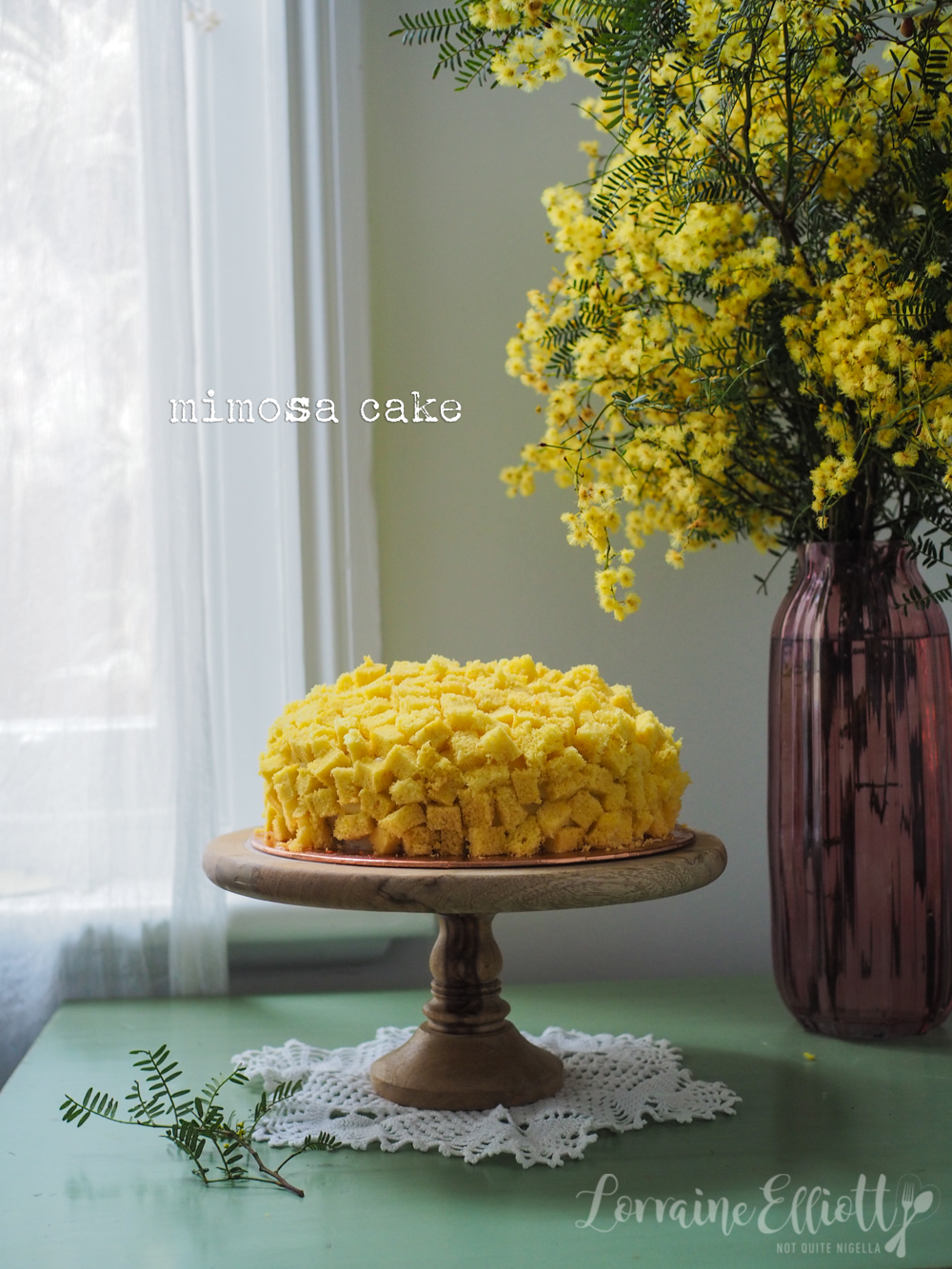 This Mimosa cake is a strikingly beautiful dream. Made with layers of light sponge cake flavoured with lemon and vanilla, it is sandwiched with Crème Diplomat between the layers and smothered with crème on top. Then it is covered in tiny squares of the sponge cake cut up! I called her Mimosa (of course!).

Mimosa cake or Torta Mimosa is a beautiful Italian cake created by chef and restaurateur Adelmo Renzi from San Filippo di Contigliano, a province in Rieti, Lazio north of Rome. It became more well known in 1962 when Renzi won a pastry competition in Sanremo with this cake and it was said to be a tribute to Sanremo which was known as the city of flowers. The design of the cake is said to resemble the Mimosa or Golden Wattle flower which just happens to be the official Australian floral emblem. Golden wattle made its way to Europe around 1820 and adapted well to the Mediterranean climate. Mimosa cake is often served to celebrate Women's Day on March 5th as in Italy it is traditional to give women a sprig of Mimosa on Women's Day. 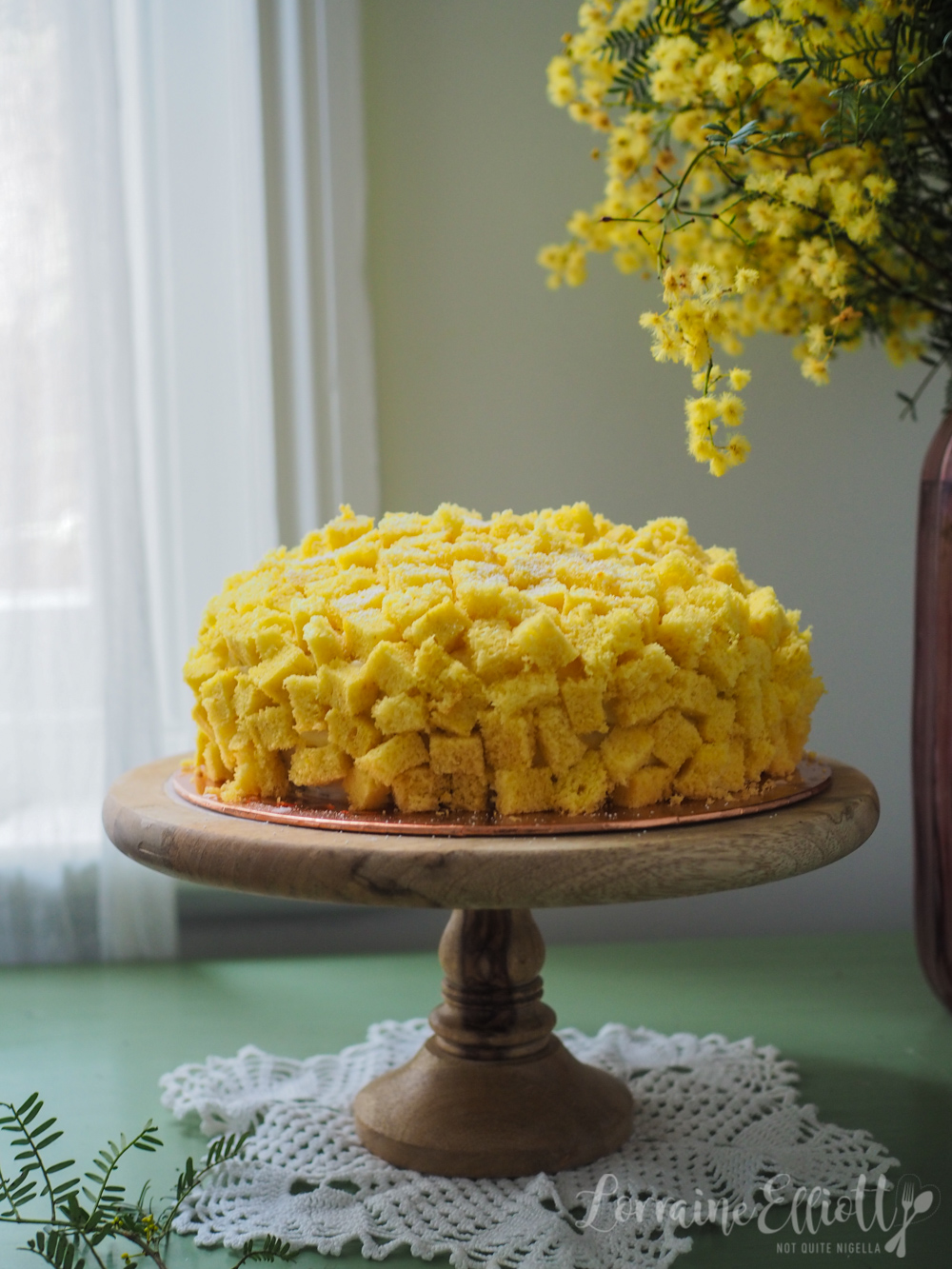 Which flavour for Mimosa cake? Mimosa cake is flavoured with fruit and you can use a variety of fruit. I had an abundance of lemons and about half a cup of homemade limoncello left and some lemon curd so I made it lemon flavoured. Making this with oranges is also popular as is pineapple and strawberry. I can also see passion fruit working beautifully too.

Other alterations: It isn't traditional but I like to add a layer of lemon curd before you add the crème diplomat between each layer. You can also use fruit jam or fresh fruit diced up. The sponge cake soaks up the flavours beautifully.

Is Mimosa Cake hard to make? Mimosa cake looks very fiddly but I find splitting this up across two days makes it entirely manageable. I much prefer making iced cakes over two days as the cake firms up a little and becomes much easier to work with.

I made this cake for an Elliott birthday party. It was a joint birthday celebration for myself, Mr NQN's sister Araluen and his brother in law Laporello who is married to Mr NQN's other sister Amaya. I must admit that I had ulterior motives when I was trying to decide what cake to make. Laporello and I often butt heads because he is an anti-feminist and I am very much a feminist and given what has recently been happening with the over turning of Roe Vs Wade I anticipated a spirited family discussion. It never gets weird or nasty and but neither of us ever back down in an argument. When I read that Mimosa cake was made for a day that celebrated women I knew that that was the cake I wanted to make for our joint birthday. "I can't wait to see Laporello's face when I tell him that it's a women's day cake!" I said giggling to Mr NQN. 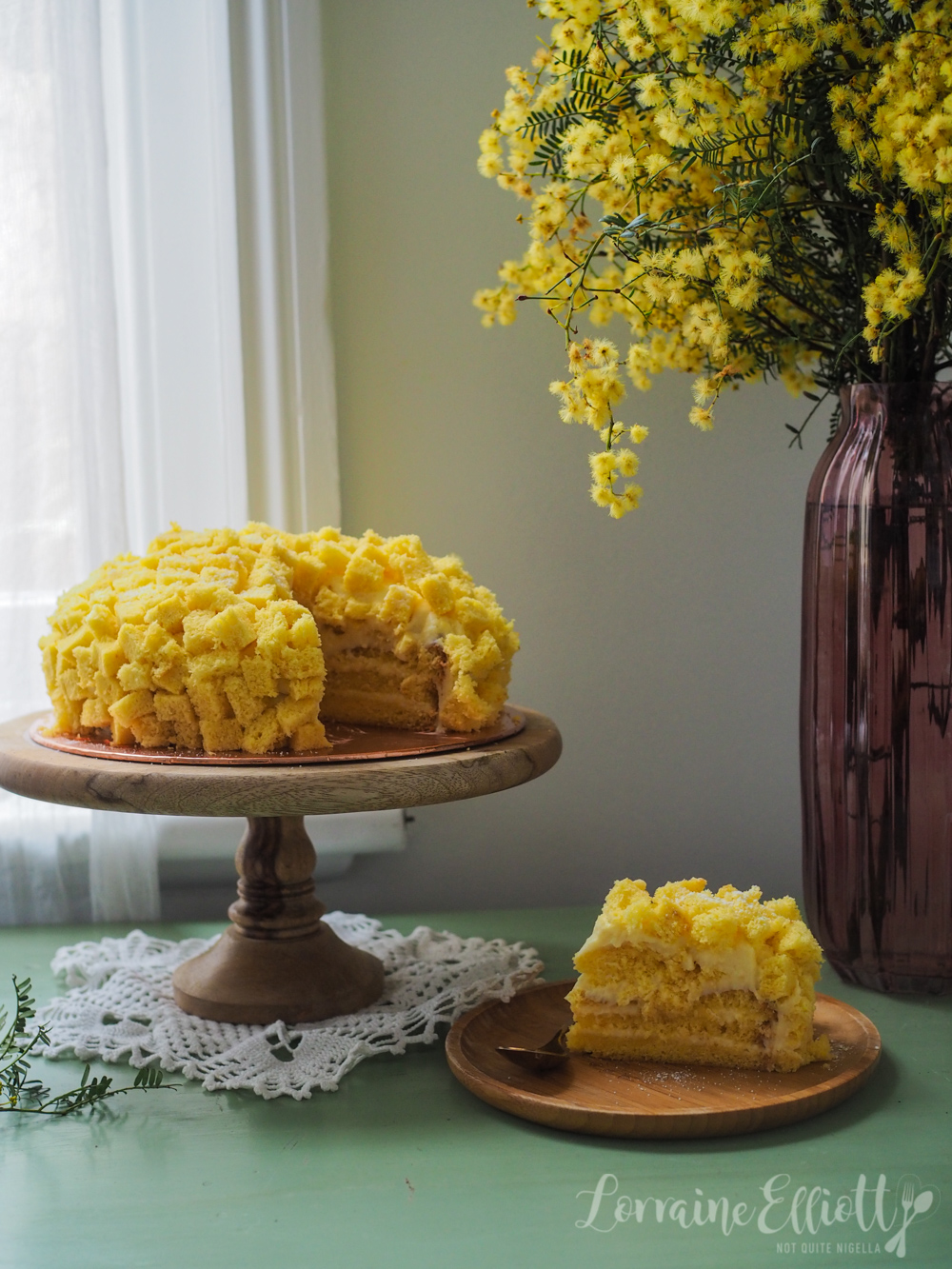 While I adore my in laws they have the inability to get anywhere on time. That becomes a hunger issue as we end up eating lunch around 2pm when everyone is ravenous but still politely awaiting the last straggler so Mr NQN asked them to arrive at 12pm, 1 hour earlier than we wanted them to and that way they'd be "on time".

And sure enough that morning the messages started arriving. One was from Tuulikki saying that they would be late because Manu had come back from camping at 4am that morning and had to clean out his car. Then Araluen messaged saying that her boyfriend Ben had a meeting and would be running late. And then I found out that Amaya who is married to Laporello messaged that he was sick and was no longer coming!

"My caaake!" I moaned to Mr NQN with my plans going awry for the big reveal of my feminist cake. They all arrived by 1pm which is when we ended up eating. After the food we had cake and we had two cakes: I had this Mimosa cake and Amaya had baked a pear and cinnamon cake. We face timed Laporello when it came to cutting the cake and he requested a doggie bag of cake which I gladly furnished. I hope he enjoyed the women's day cake! ;)

So tell me Dear Reader, have you ever tried a Mimosa cake? Have you ever had to give someone a different time to ensure that they arrive on time? Or has that ever happened to you? 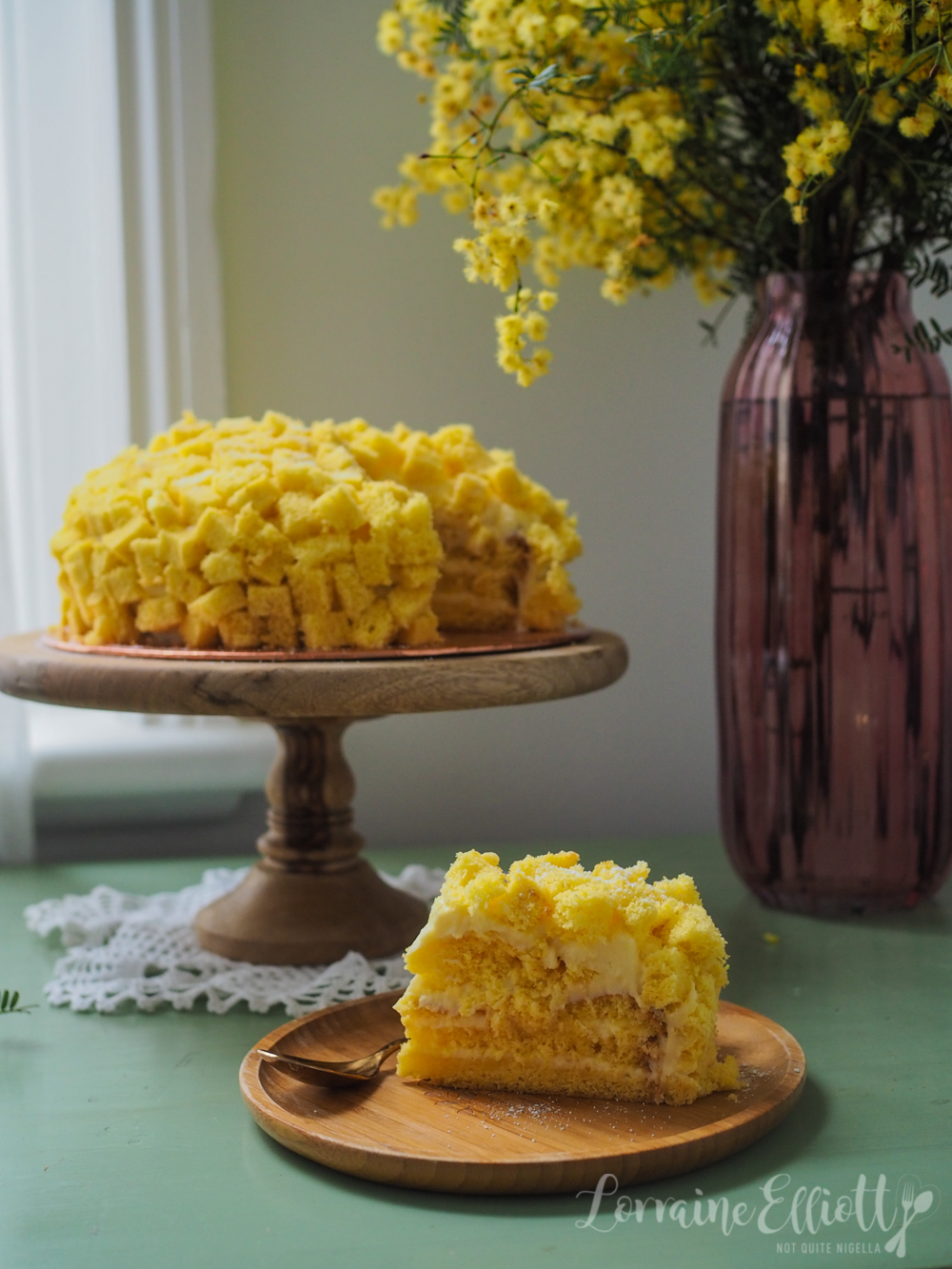 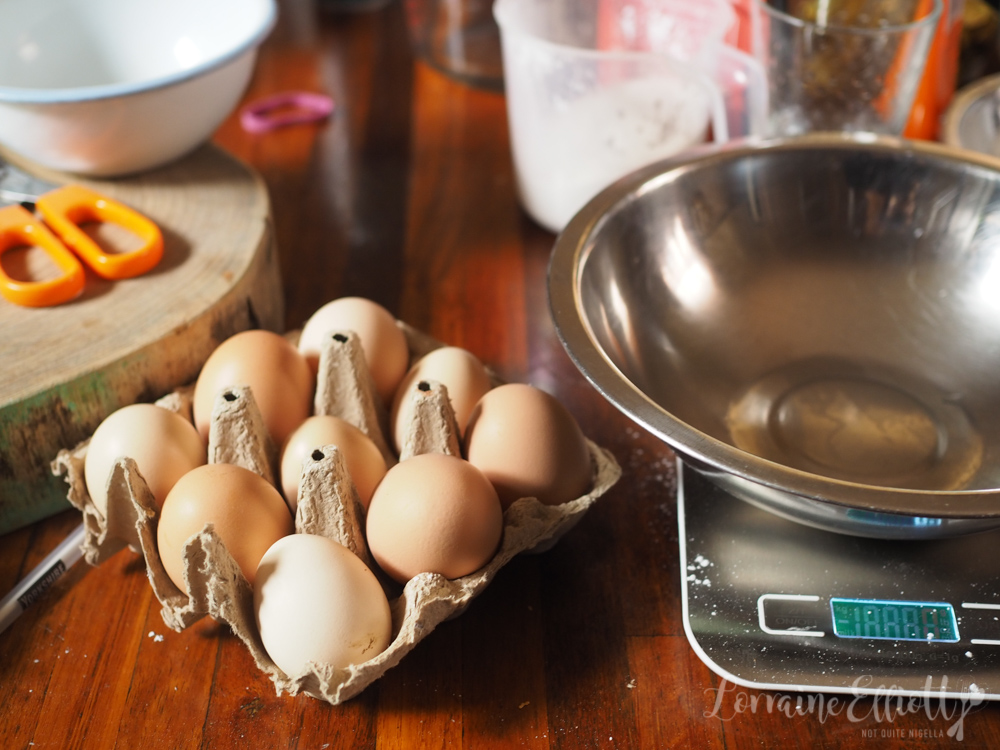 Step 1 - Preheat oven to 180C/350F/gas4. Line 2x 20cm/8inch round cake tins on the base and sides. Sift the flour, cornflour and baking powder together and set aside. Place the eggs whites in a clean bowl of a mixer with a whisk attachment and whisk until you get soft peaks. Add half of the sugar and beat until glossy and firm peaks. Add the remaining sugar, egg yolks, lemon zest, vanilla, lemon and yellow food colouring and whisk for 2-3 minutes until double in volume. 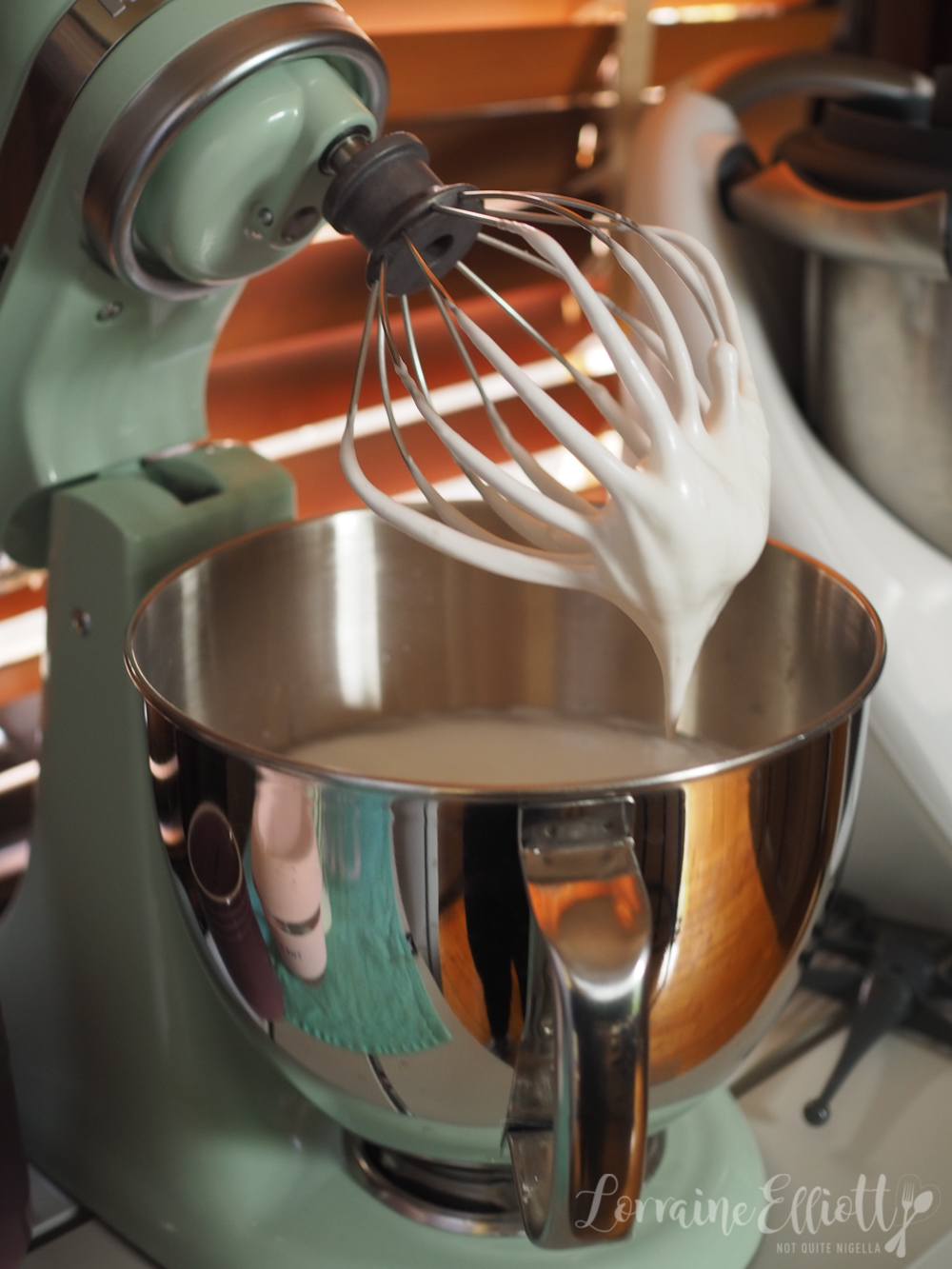 Step 2 -Sift the flour mixture into the egg mixture in 2-3 lots folding in well making sure that there are no streaks but also ensuring that you use a gentle fold motion so as not to deflate the mixture. There are often streaks of flour hiding in the mix so make sure that the flour is well incorporated. Divide this mixture into the two tins evenly and bake for 25-28 minutes or until the centre springs back when touched. Allow to cool and wrap until needed-I make this the day before I want to fill it. 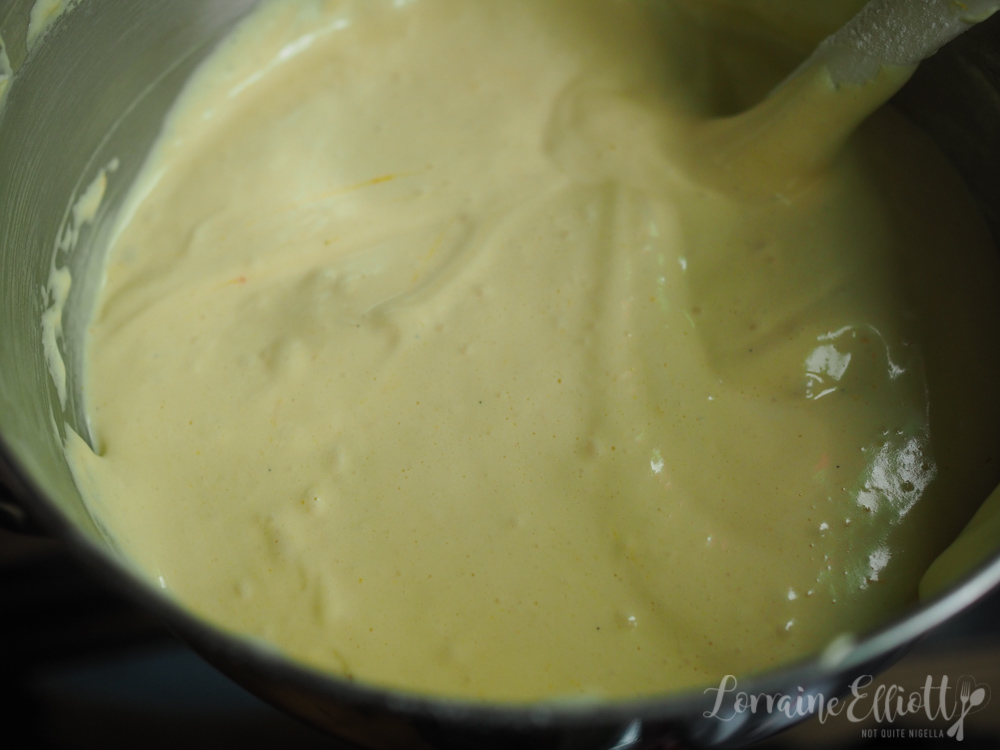 Step 3 -The make the Crème Diplomat. Whisk the eggs, sugar and vanilla well in a jug. In a saucepan heat up the milk until almost boiling. Add a ladleful of the hot milk into the jug to temper the eggs and then gradually pour the eggs in the jug into the saucepan of milk. Knock het down to low medium and stir with a flat bottomed spatula to avoid the sugar catching at the bottom. It will gradually thicken to become a custard. Cover the surface with cling film and cool completely. Whisk the cream until you get soft peaks and then fold it into the cold custard mixture (you may have to whisk the custard up a bit to loosen it).

Thermomix Directions for Crème Diplomat: Place the eggs, sugar, vanilla and cornflour in the bowl and set to 7 mins, 90C Speed #4. Cover the surface with cling film and cool completely. Clean the bowl and add the butterfly insert and add the cream. Set to 30 seconds speed #4 and whip until you get soft peaks. Then place the cold custard back into the bowl with the whipped cream and set to 30 seconds Speed #4. 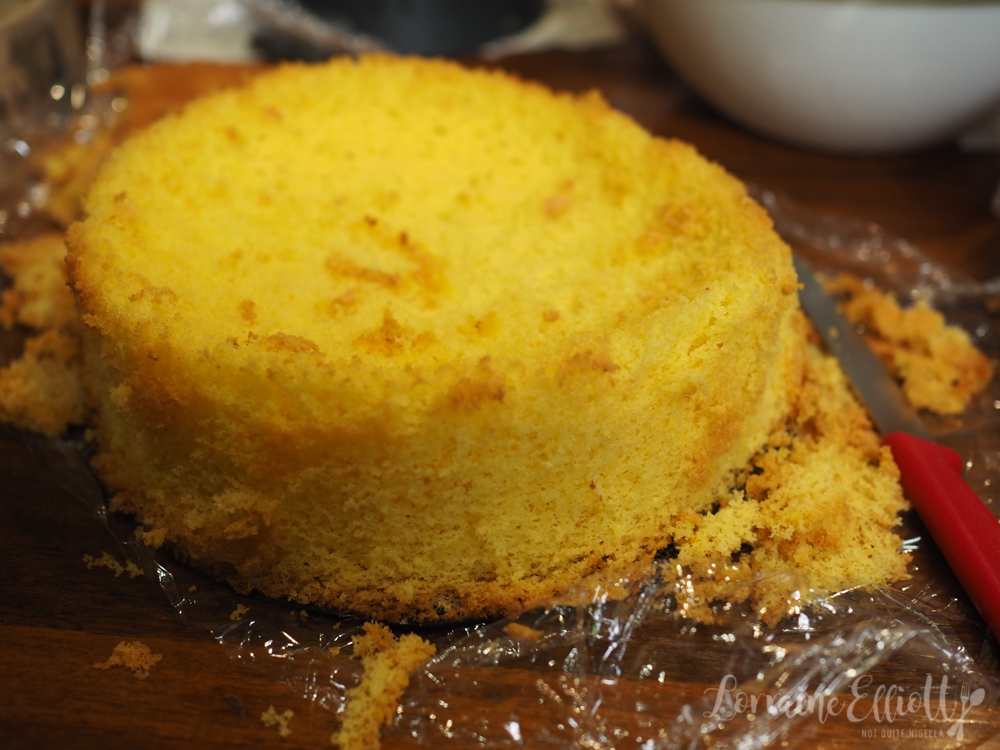 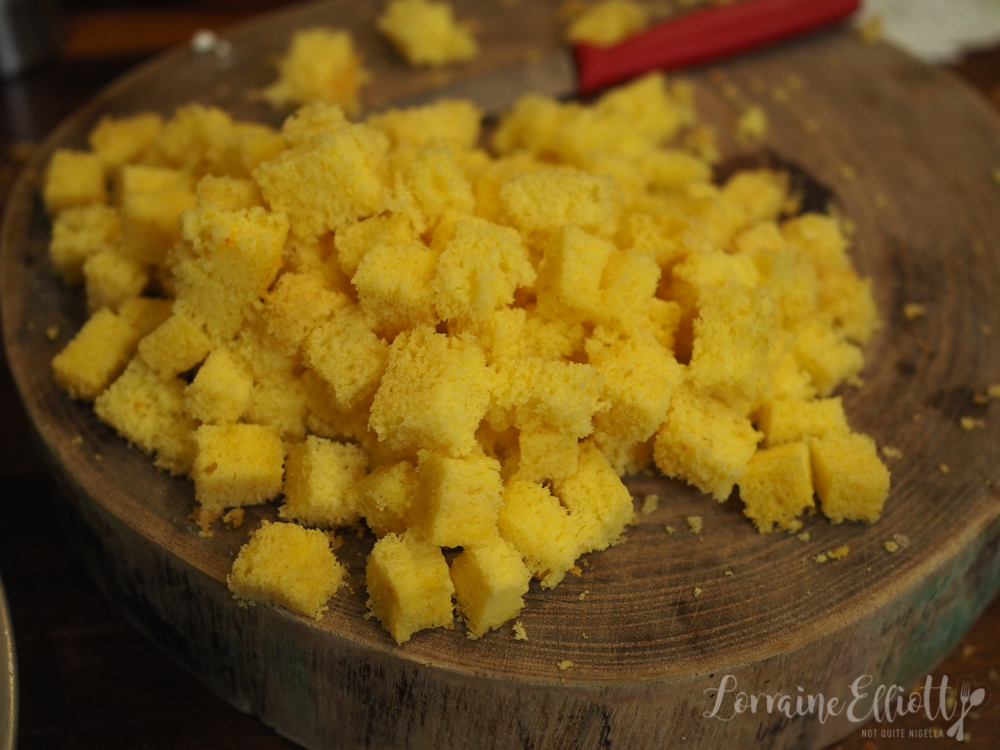 Step 4 -Take both cakes and place them in the fridge for 20 minutes to firm up on the outside. Cut one cake into thirds horizontally and then return to the freezer. With the other cake remove all of the brown from the outside of the cake with a serrated knife and them cut the cake in four horizontally. Then cut each layer into small cubes around 1cm/0.4inches. Set aside. 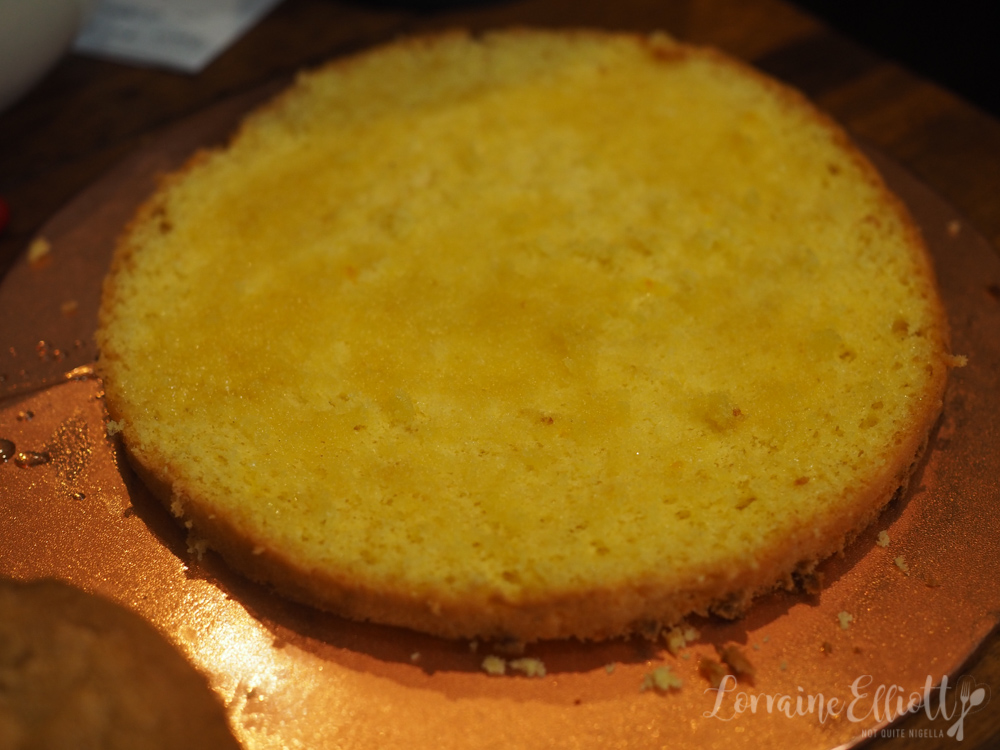 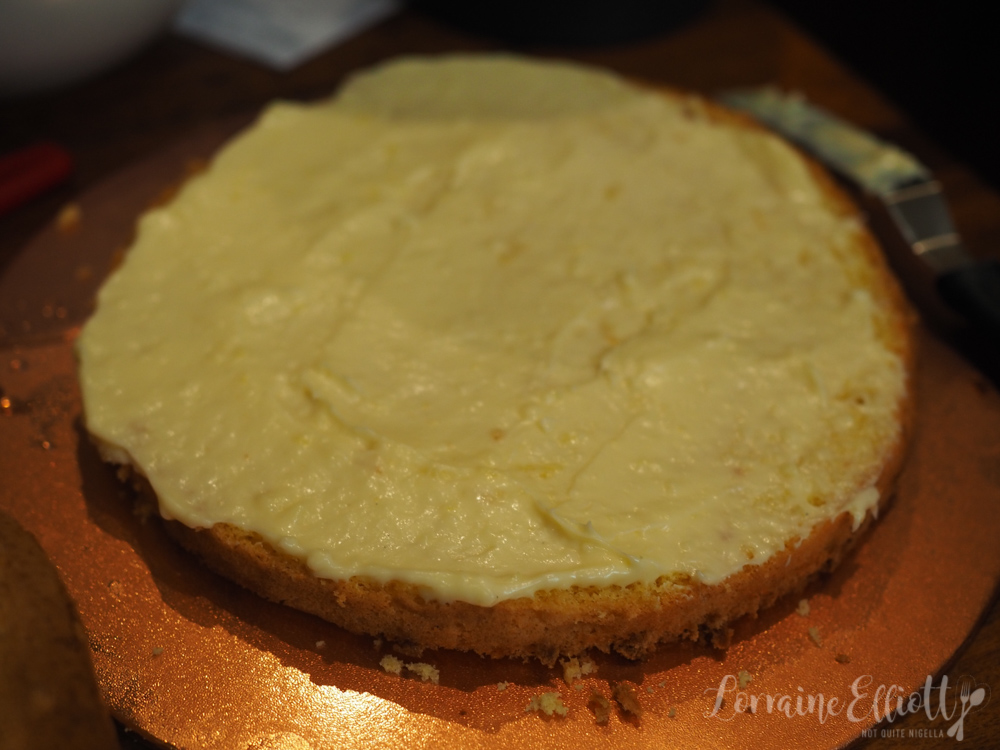 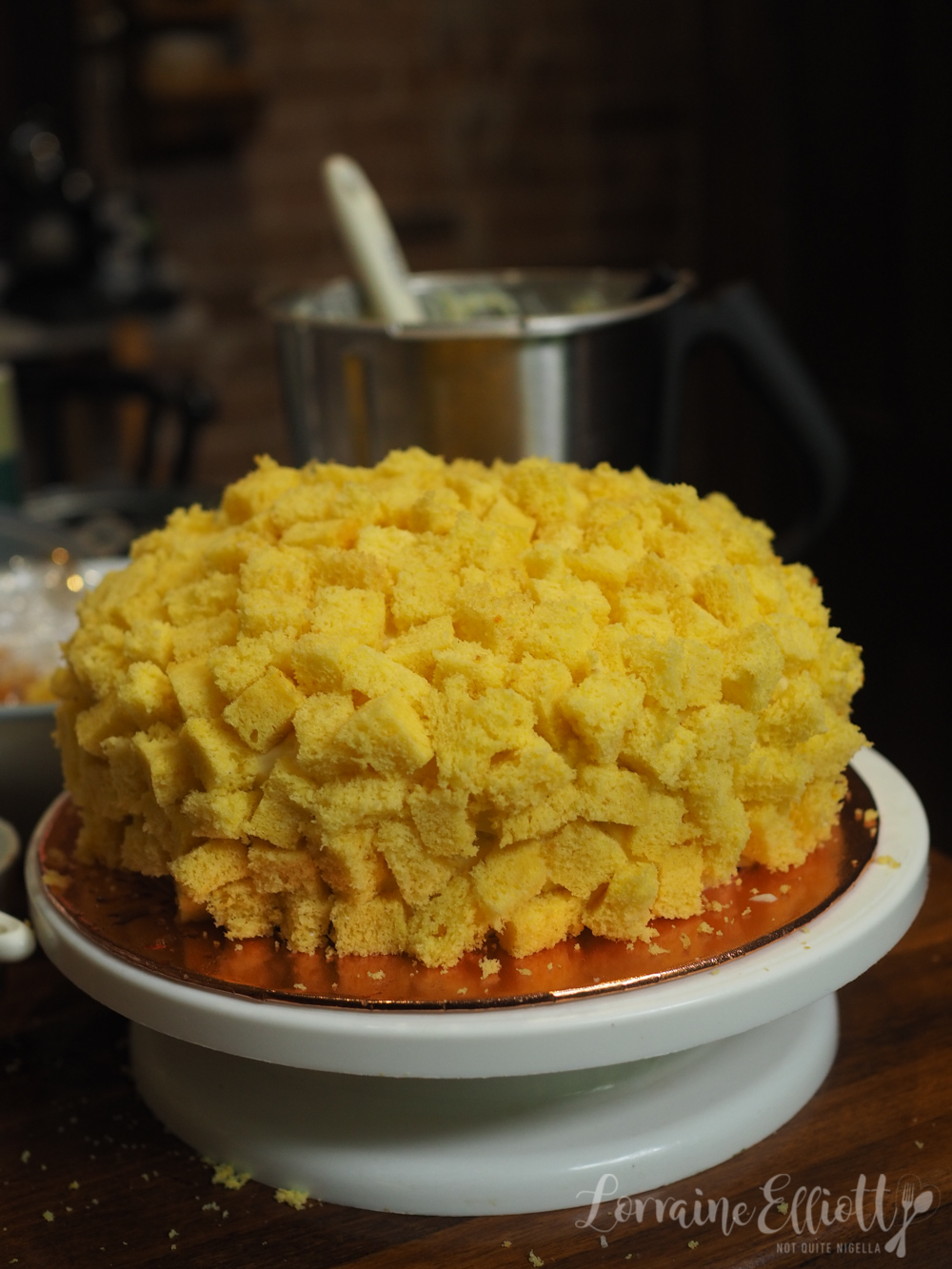 Then sticking the cake pieces on the outside 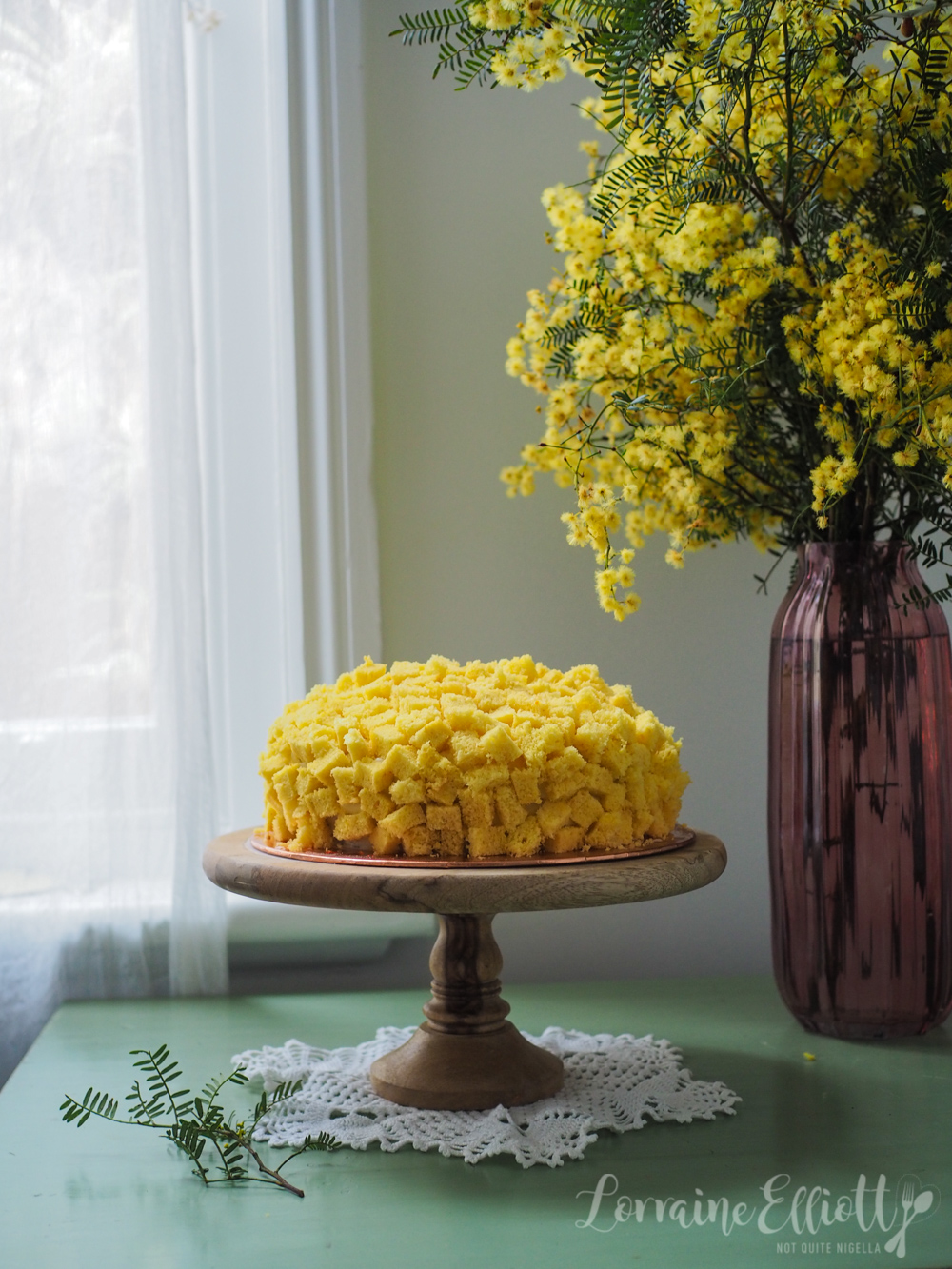