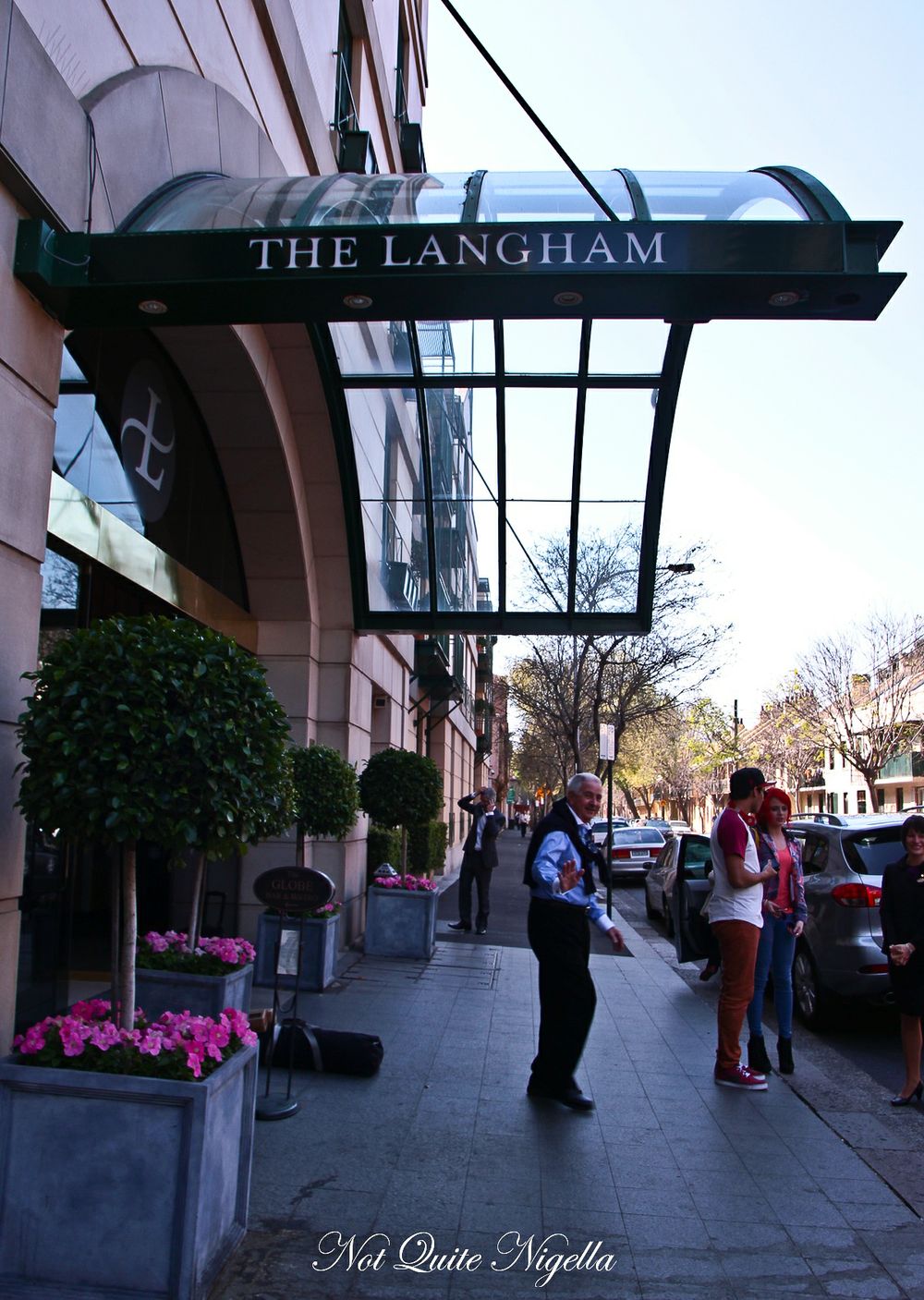 Psst! I'm pretty sure that's The Voice's Sarah de Bono on the right...

It was a Wednesday afternoon I had been looking forward to for weeks. A truly girly afternoon, where I would not only get to have a delicious afternoon tea, I would also get to meet some of my readers, hear more about Dilmah's charity work and check out the new Langham Hotel. But of course, in this mid season spring weather, I was running late while wrestling with sartorial choices-would it be too hot or cold? Should I wear a hat? Would that tag me as "the only lady wearing a hat in the corner?" 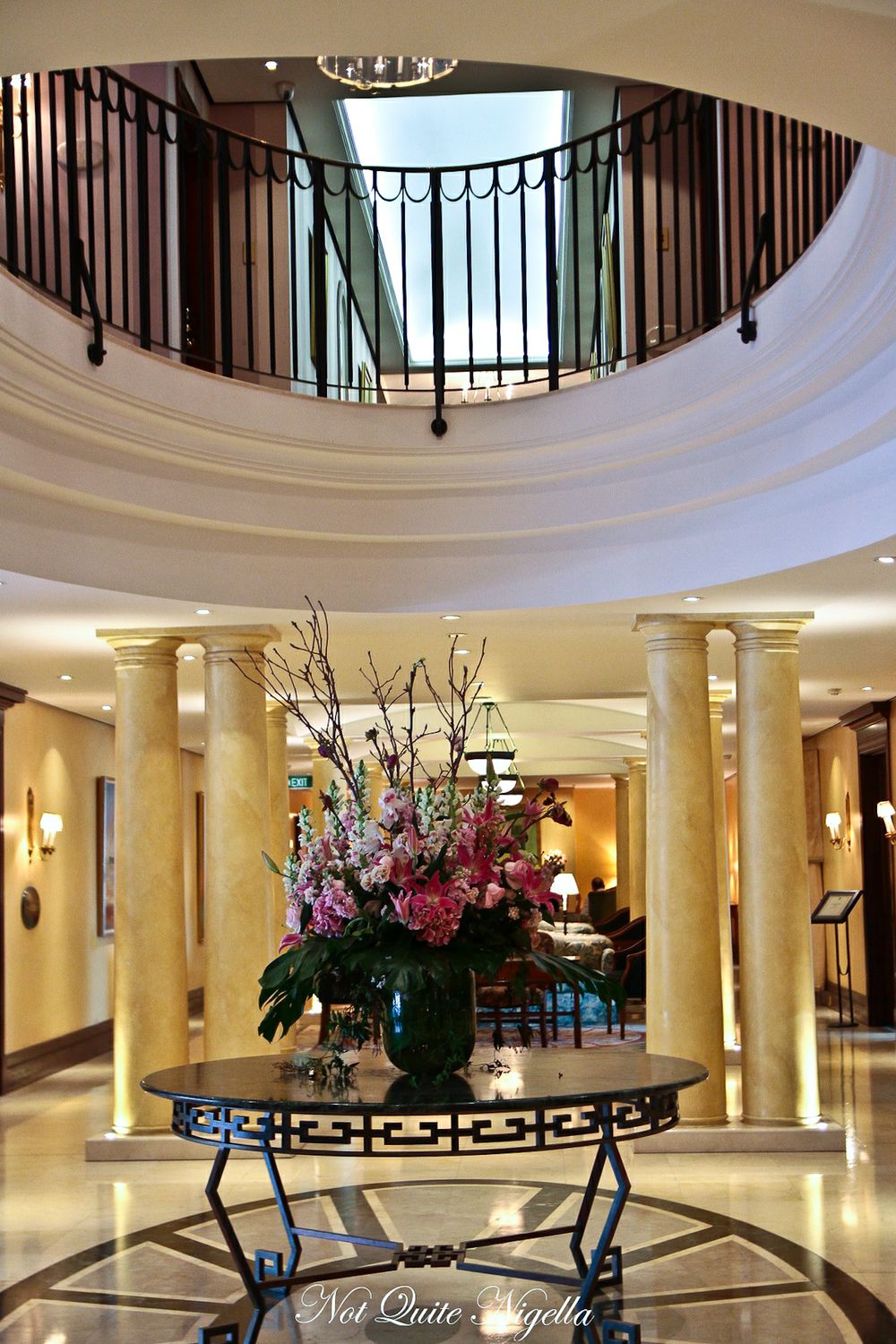 I needn't have worried. My friend Amanda is patiently waiting for me in the lobby area of the new Langham Hotel. "Why, there's no Langham Hotel in Sydney!" I hear you say. Well only a few weeks ago it was the Observatory Hotel and I was curious to see how much had changed. Not much to be honest and apparently the $15 million refurbishment is still to come. At present, it looks pretty much like The Observatory used to although with a touch more pink. They reassure us that much more pink is to come. Huge goodie bags packed with teas lined the tables outside and we make our way into the room. There is no assigned seating so we do what we always do and sit at the back of the bus ahem...the room. 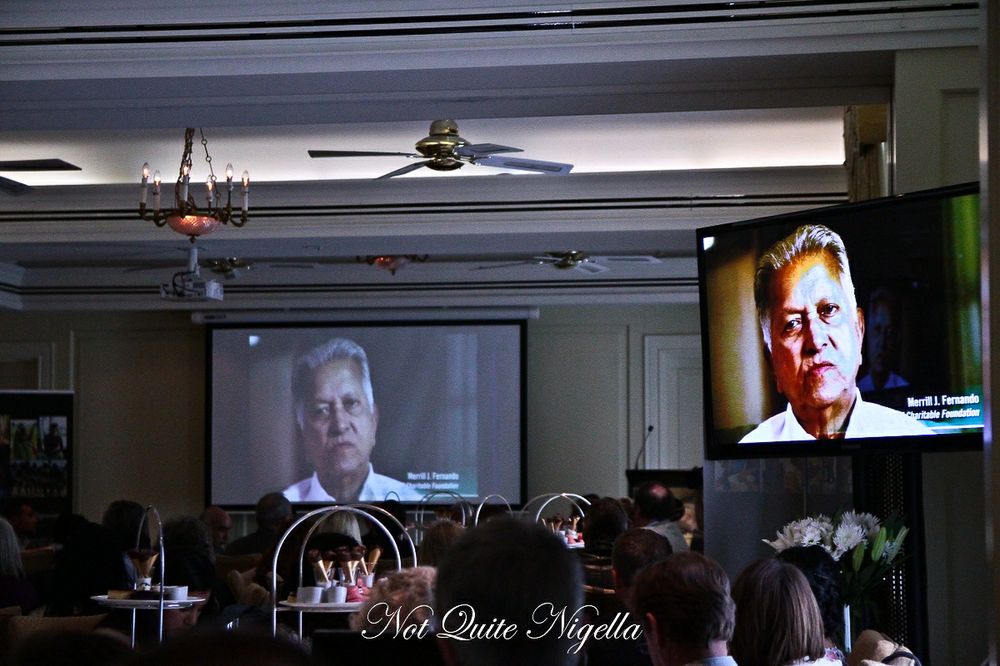 Chef ambassador for Dilmah, Flying Fish's Peter Kuruvita takes to the stage and introduces the family. He first met Dilmah's founder Merrill J. Fernando when he visited Peter's restaurant and asked to speak to him. He left him with a "I'll be watching" and years later, Peter is now an ambassador for them. Dilmah is a family business and Merrill J. Fernando and his son are here from Sri Lanka for this invitation only event.

Their extensive charity work of the MJR Charitable Foundation is the focus here at this event and they show us an inspiring video of the communities whose lives they help enrich. Help takes the form of allowing people to empower themselves to make a better life for themselves by introducing skills. "I've been a tea farmer for 63 years" Merrill J Fernando tells us. The phrase "business is a matter of human service" is paramount as is operating in symbiosis within its environment. He set out to create a unique company and he started with naming Dilmah after his sons Dilhan and Malik. 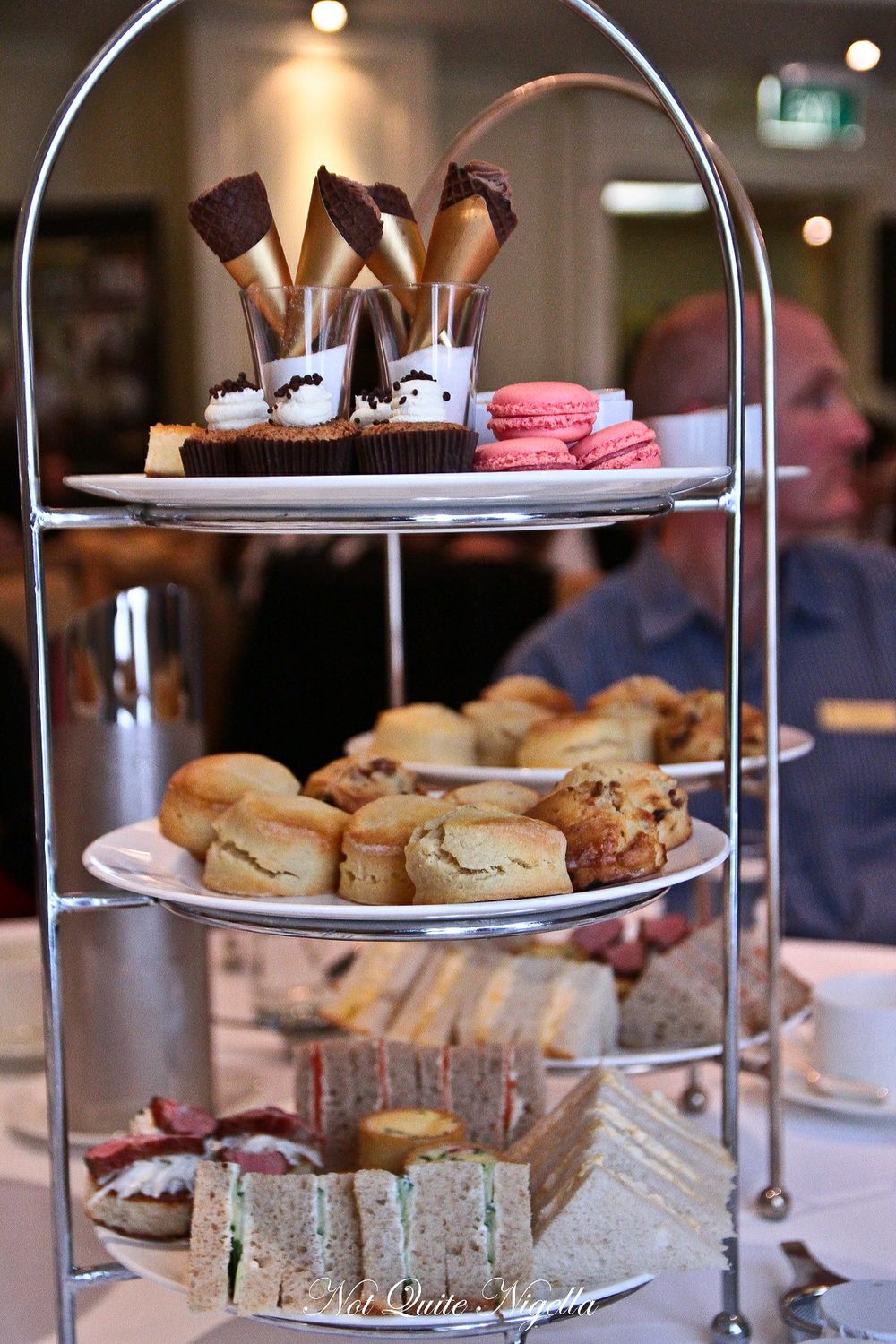 Everyone is too well behaved to start eating while he is talking although hunger and the appealing tiers of sandwiches proves too much for some. The selection at today's event is made up of a selection of four Dilmah teas (although only two made it around to our table, the Meda Watte and Uda Watte). There are also sweet and savoury goodies including two recipes that won the Dilmah Real High Tea Challenge. This is where the public were invited to submit recipes incorporating tea for a chance to win a trip to Sri Lanka. They would also be announcing the winners later on that day. 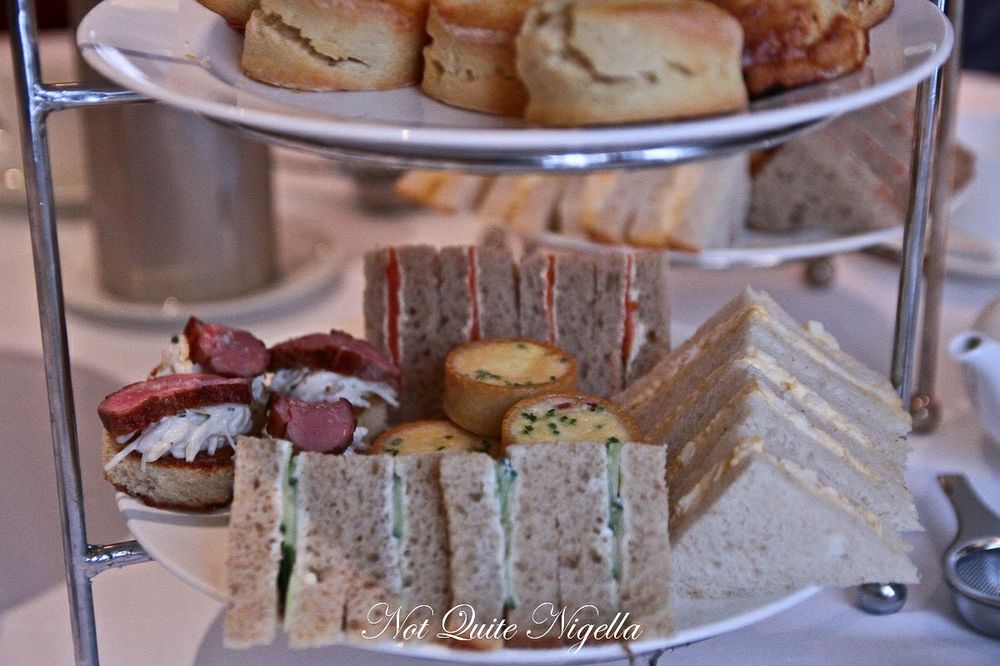 We start with the bottom tier of goodies. There are three types of sandwiches: the smoked salmon, cucumber and egg & mayonnaise. They're all good although I did particularly like the egg and mayonnaise as there was more filling in these than the others. The Quiche Lorraine was rich and creamy with a beautifully thin and buttery shell. The highlight however was the green tea and jasmine smoked duck breast with celeriac remoulade on brioche toast-this was the another winner of the Real High Tea challenge and the duck was succulent, the celeriac remoulade lent a slight crunch and divine creaminess and the brioche toast was the perfect vehicle to transport these morsels into our mouths. I only wish they'd given us the names of the winners so we could know who created these lovely recipes.

The middle layer of scones (plain and fruited) came with little glass pots of strawberry jam and clotted cream. I only meant to eat a mouthful of each but they were really quite good and before I knew it, they were both gone. 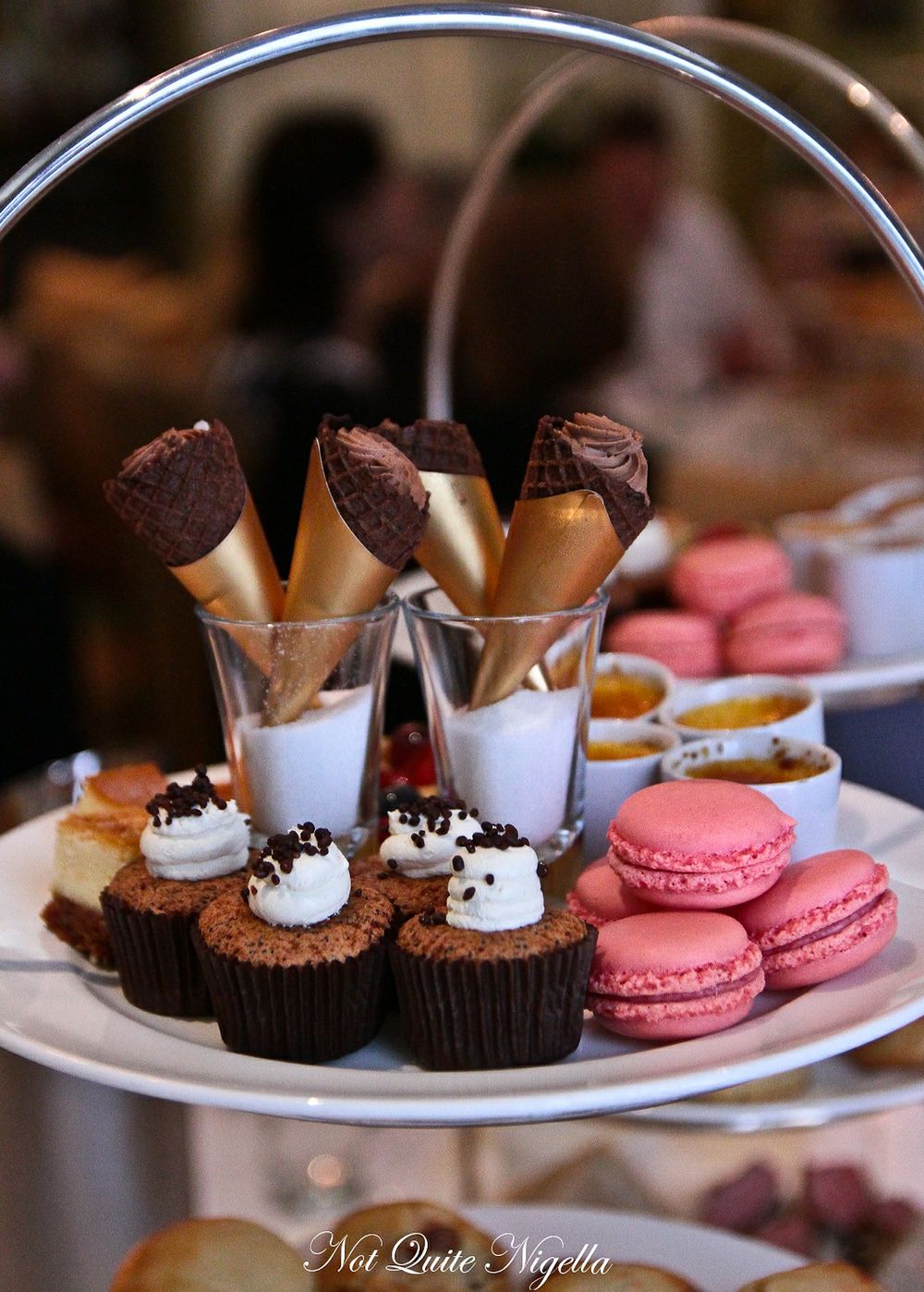 I exercised a bit more restraint on the pastries and tea cakes which were on the top layer. I started with a mini square fruit tart which was fine but the tart shell was too thick and it only had the tiniest dot of custard in it. The chocolate mousse was very dark and rich and in a chocolate cone which had turned a little wet. 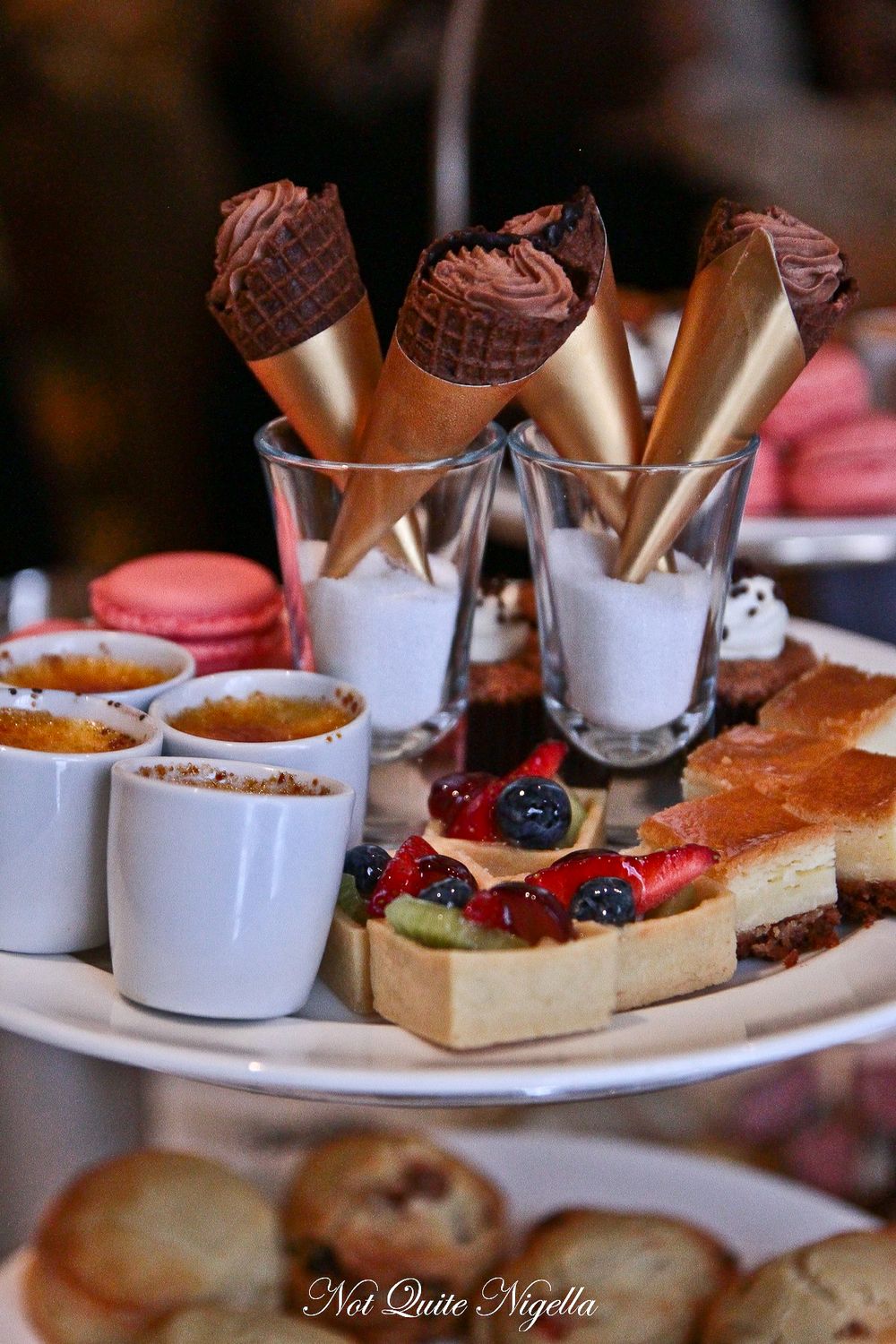 The other side of the sweets layer

The macarons were very lightly flavoured and sweet perhaps needing a bit more flavour to them. My favourite ended up being the orange and poppyseed cupcake which was moist and full of flavour although we all at first thought that it might be a chocolate or mocha cupcake based on appearance. 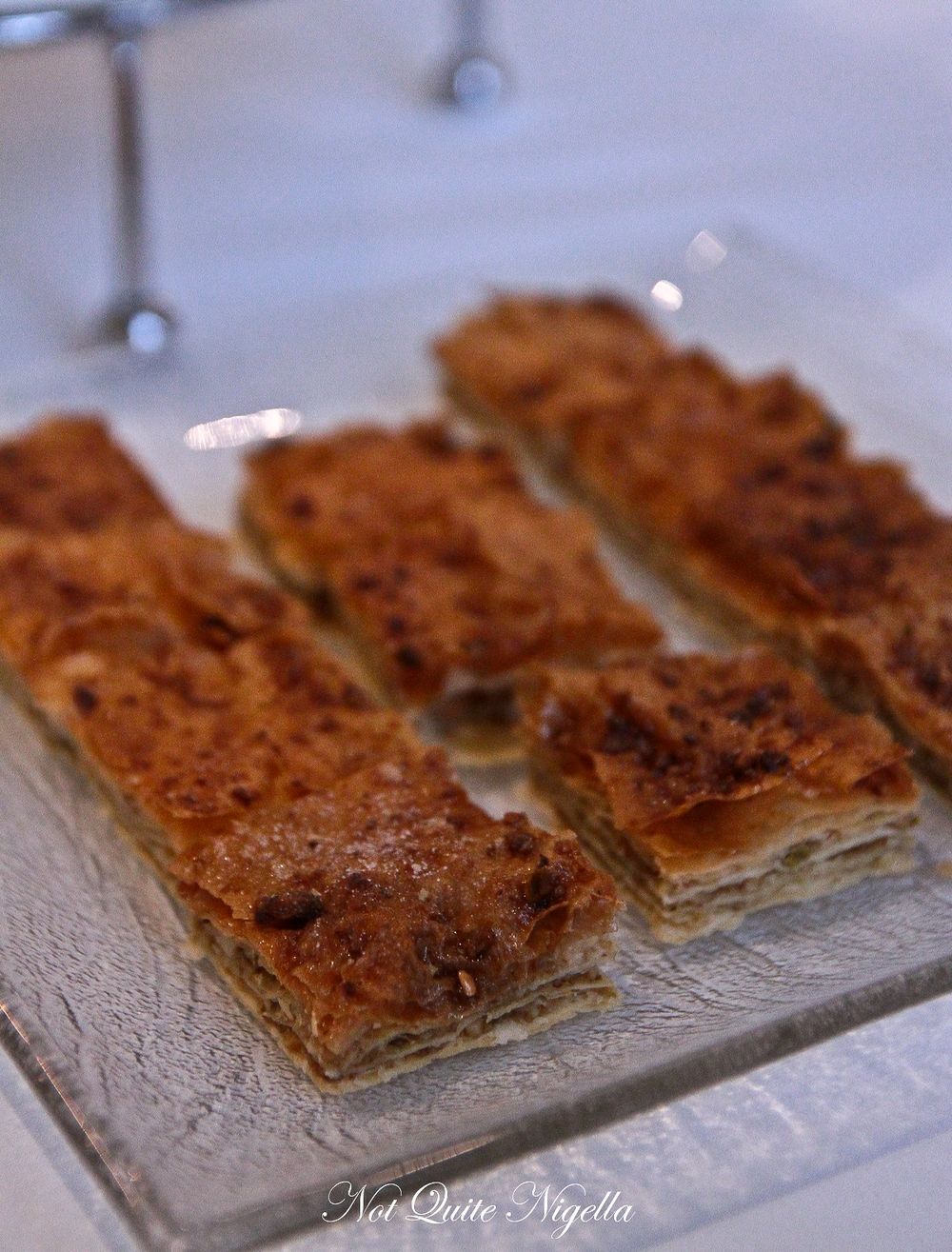 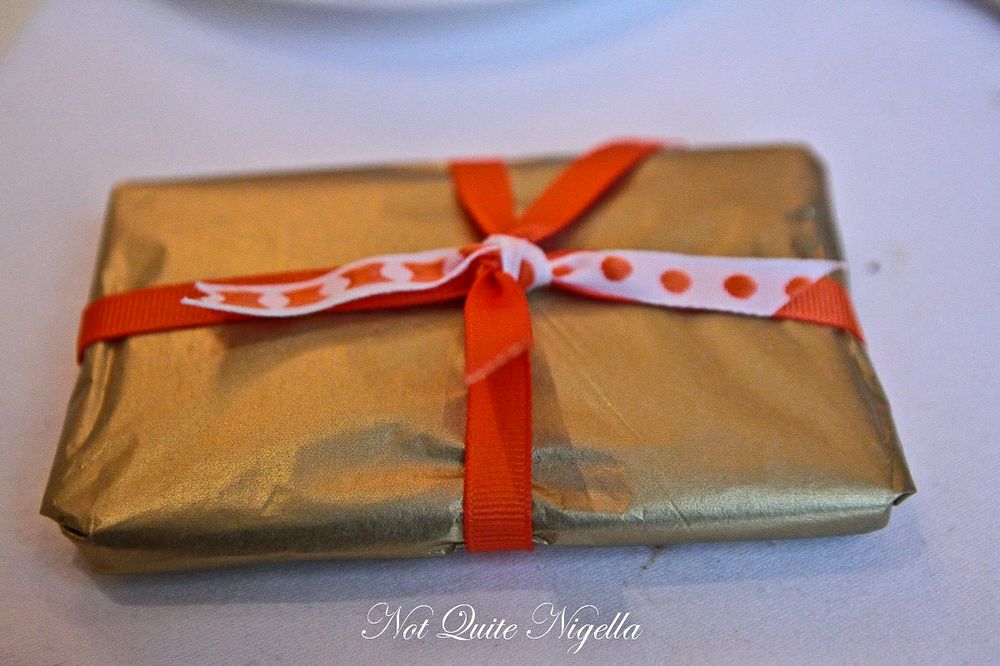 The winners were then announced and a surprise was that there was only supposed to be one winner making their way to Sri Lanka. Instead, they announced that because the standard of entries was so high, there were be four overjoyed winners jetting off to Sri Lanka and they were Kittea Kelsey, Sue Collins and Sandy & J.D. Wingrove! 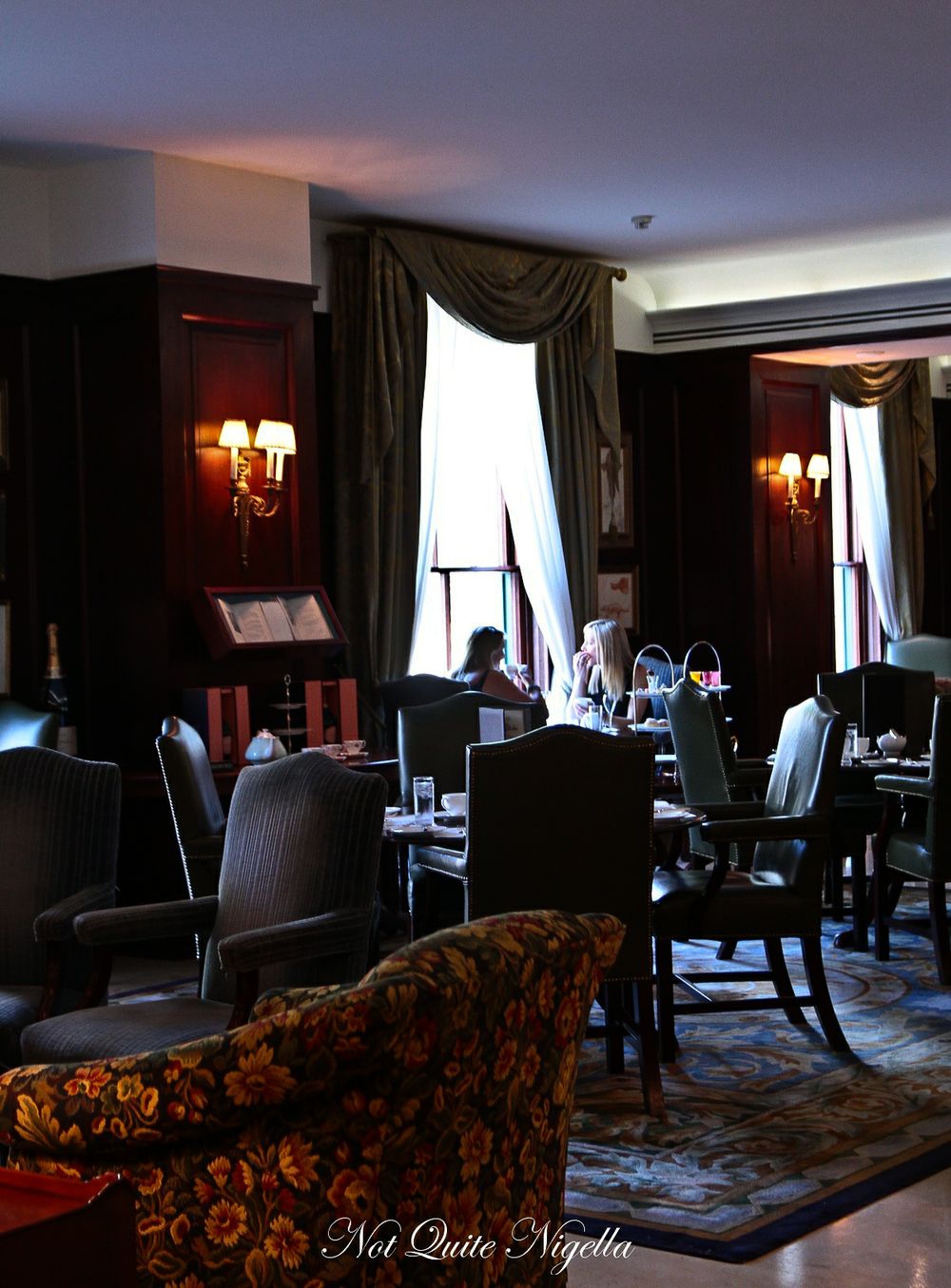 And although the tea, cakes and hearing all about Dilmah was fantastic, the icing on the proverbial cake was meeting with some of my readers. Some of you like Matilda (who sends me the most divine Italian biscuits every Christmas) and Jaqi have been long time readers and it was fantastic to meet others like Katerina, Clare, Meg, Alex, Sylvia, Valentina and Dilhara who were so sweet to come up and say hello (please forgive me if I've missed a name!). They were as delightful as I know you all to be so I thank you for making it a very special day!

So tell me Dear Reader, which charities do you think deserve a shout out because of the good work they do? And do you always finish the entire afternoon tea? 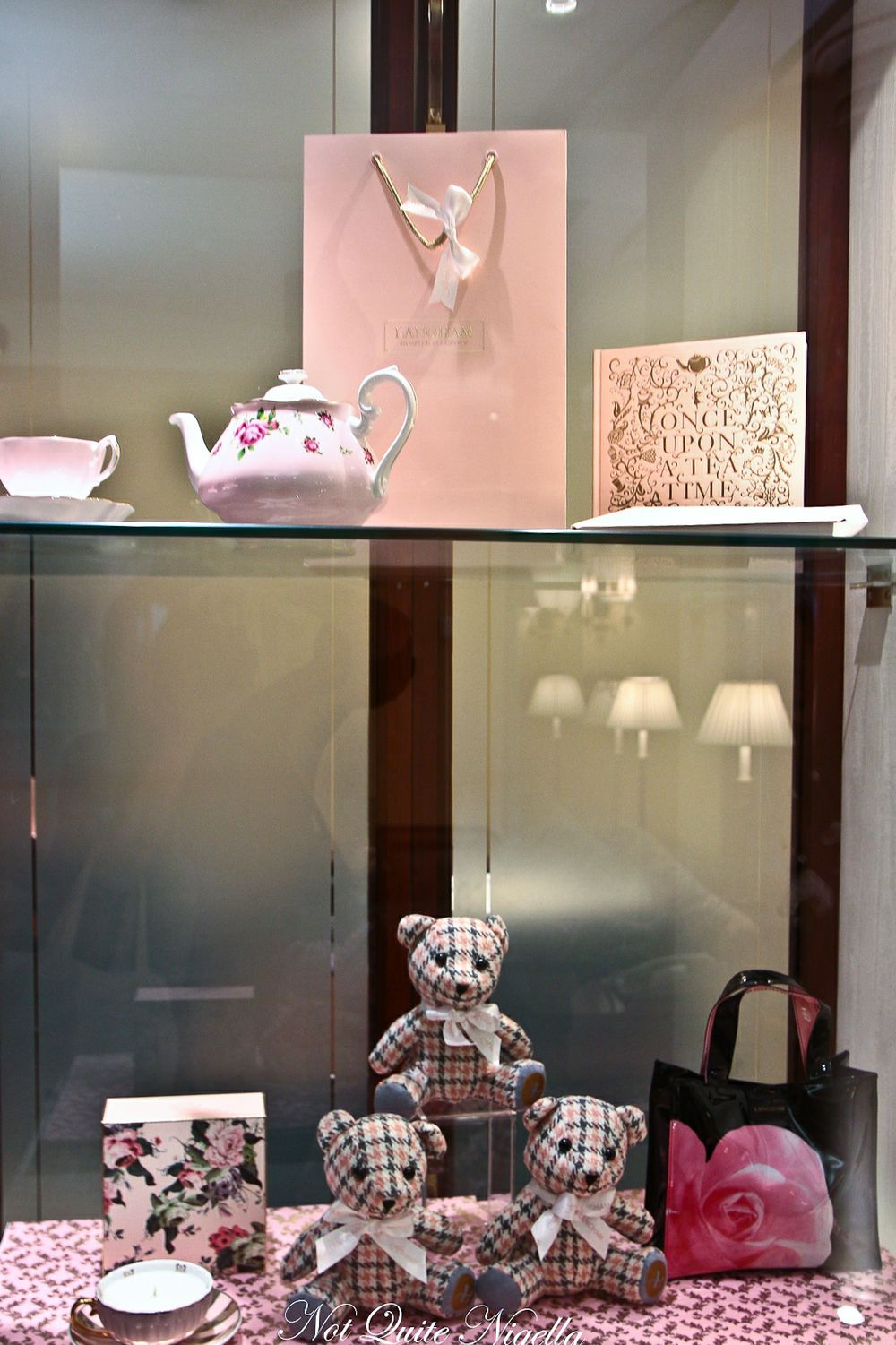