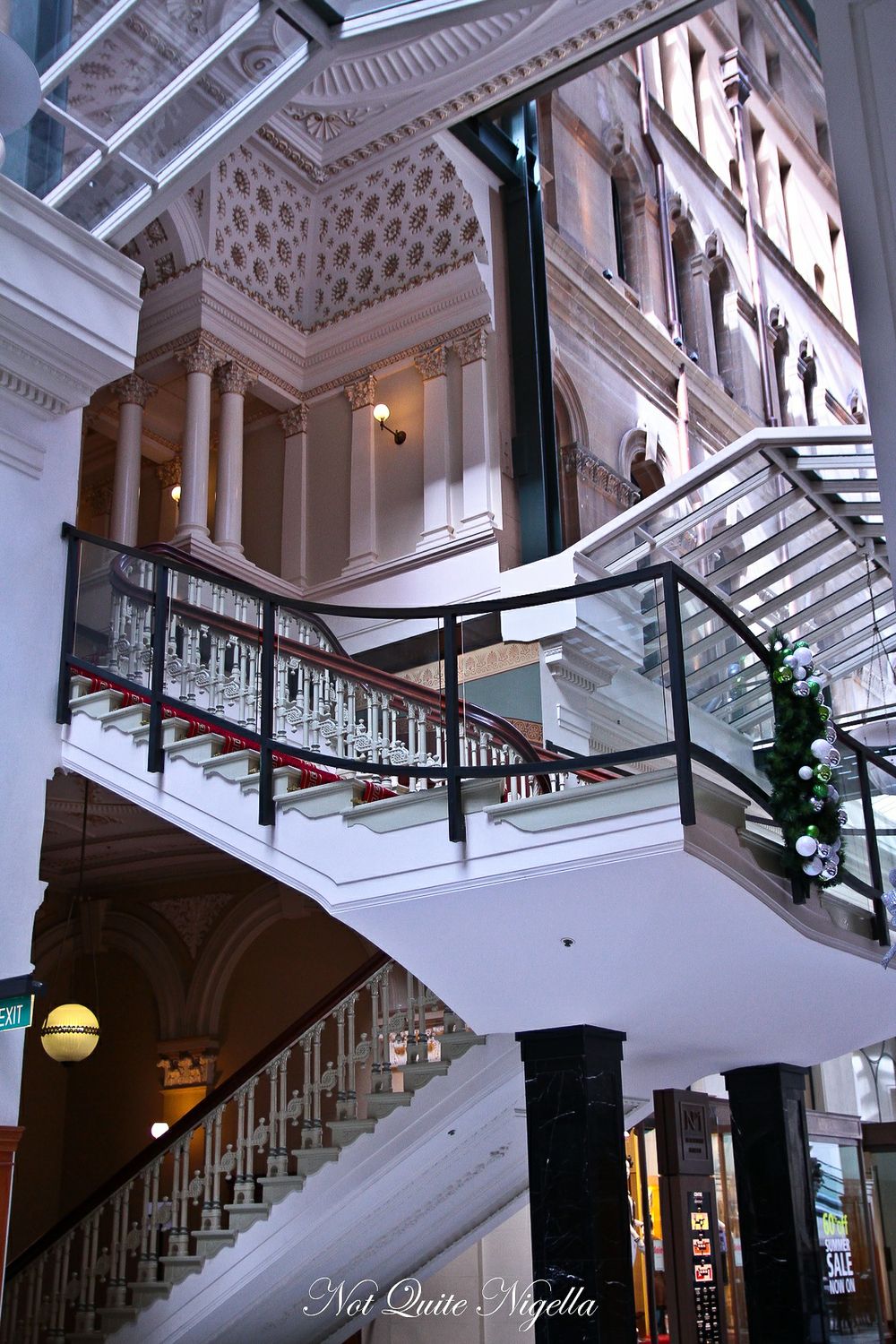 Dear Reader, do you ever wonder about people listening to your conversation when you get together with friends? The thought occurred to me as I was having afternoon tea at The Westin one afternoon. I was catching up for a pre Christmas get together with Miryana and Belle and there were two men sitting by themselves at separate tables less than a metre away.

In the space of 1.5 hours we managed to traverse a varied range of topics from travelling, prostitutes, how to tell a prostitute, Alice in Wonderland, Christmas, New York and the sad demise of the nurse in London, only pausing to take breaths and eat our little morsels. I remember thinking that it appeared to others that we might have attention deficit disorder of the conversation. 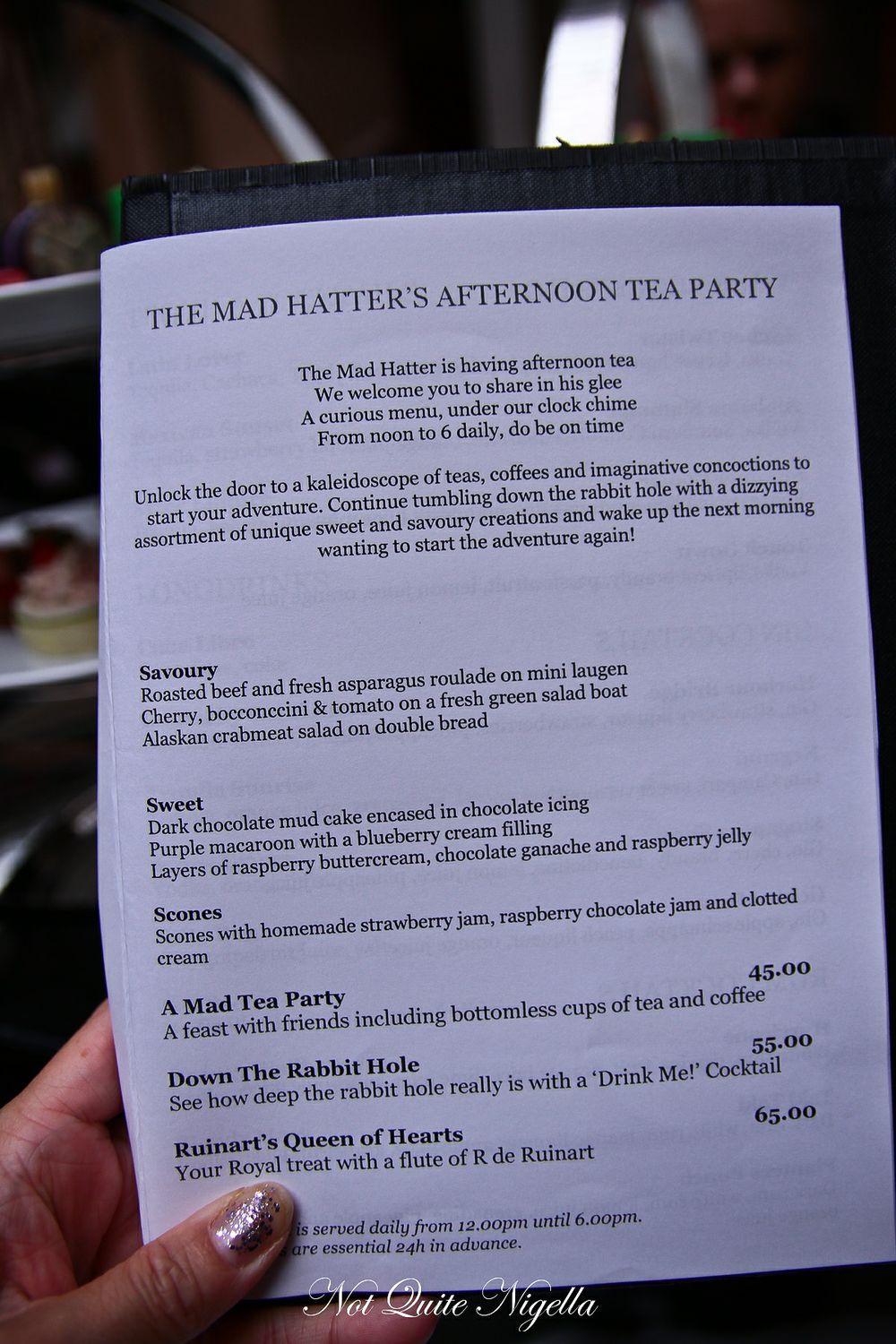 A reader of mine Wendy had recently told me about the Mad Hatter afternoon tea at The Westin and because I can't resist anything Alice in Wonderland themed, a booking was made for a pre Christmas catch up. It's held at the ground floor lounge which is all gold and neutral colours and very much like a hotel lounge.

There are three choices for the Alice in Wonderland menu: The Mad Tea Party $45, Down the Rabbit Hole ($55 with a "drink me" cocktail) and Ruinart's Queen of Hearts ($65 with a flute of R de Ruinart) afternoon tea. The afternoon tea comes with unlimited tea and coffee for two hours and the teas are all loose leaf varieties by Jing. All of the food is the same with all three afternoon teas with the drinks being the only difference. The Mad Hatter's afternoon tea was originally available for the month of October during the Crave food festival but proved such a hit that they've extended the offering. 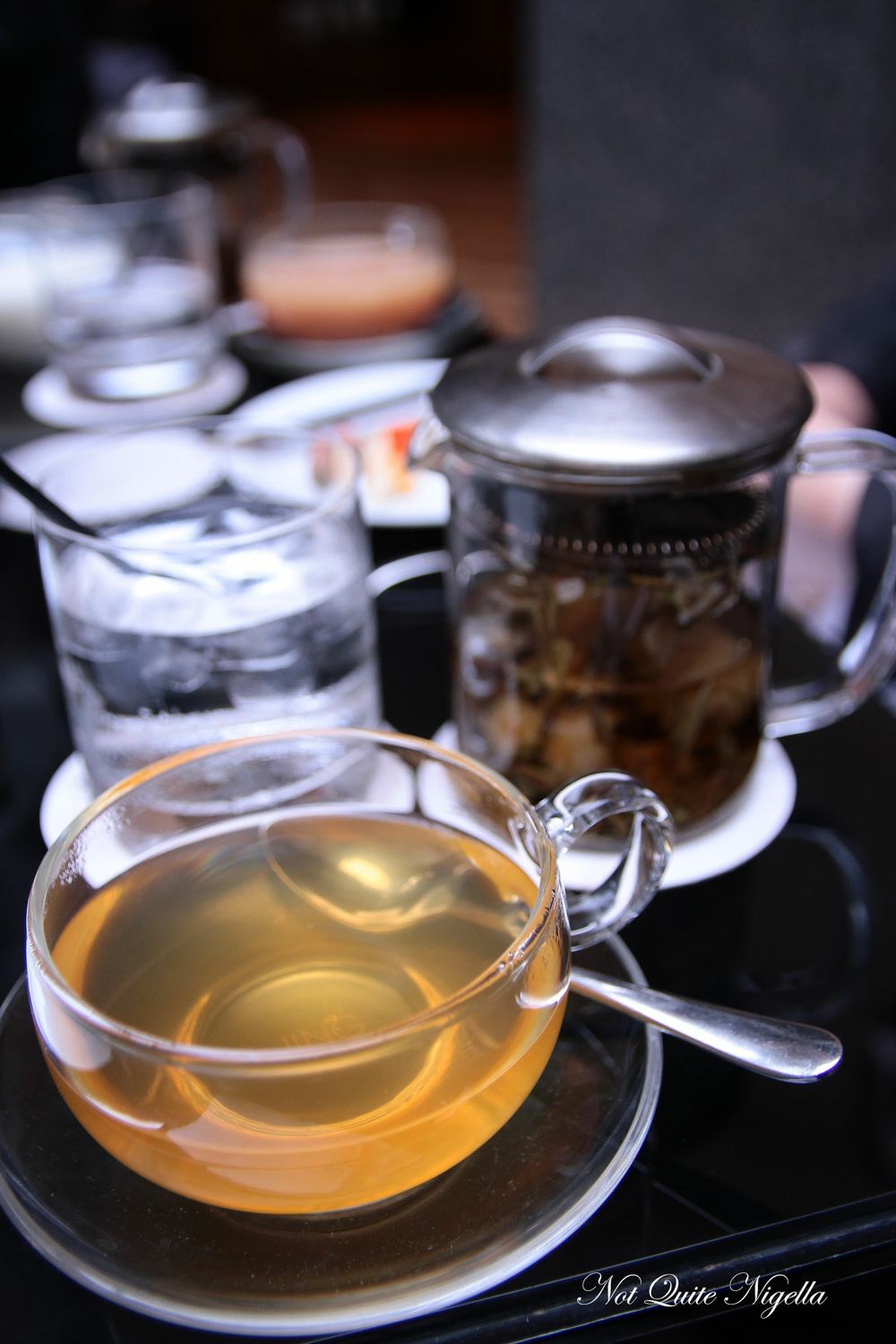 Our teas come in cute teapots with the leaves and flowers open. Mine is a Westin blend with white peony and rose which is fragrant but quite mild as white teas can be. Miryana remarks that her tea is quite weak whereas I prefer my tea quite weak. The milk provided has been heated which is a nice touch though. 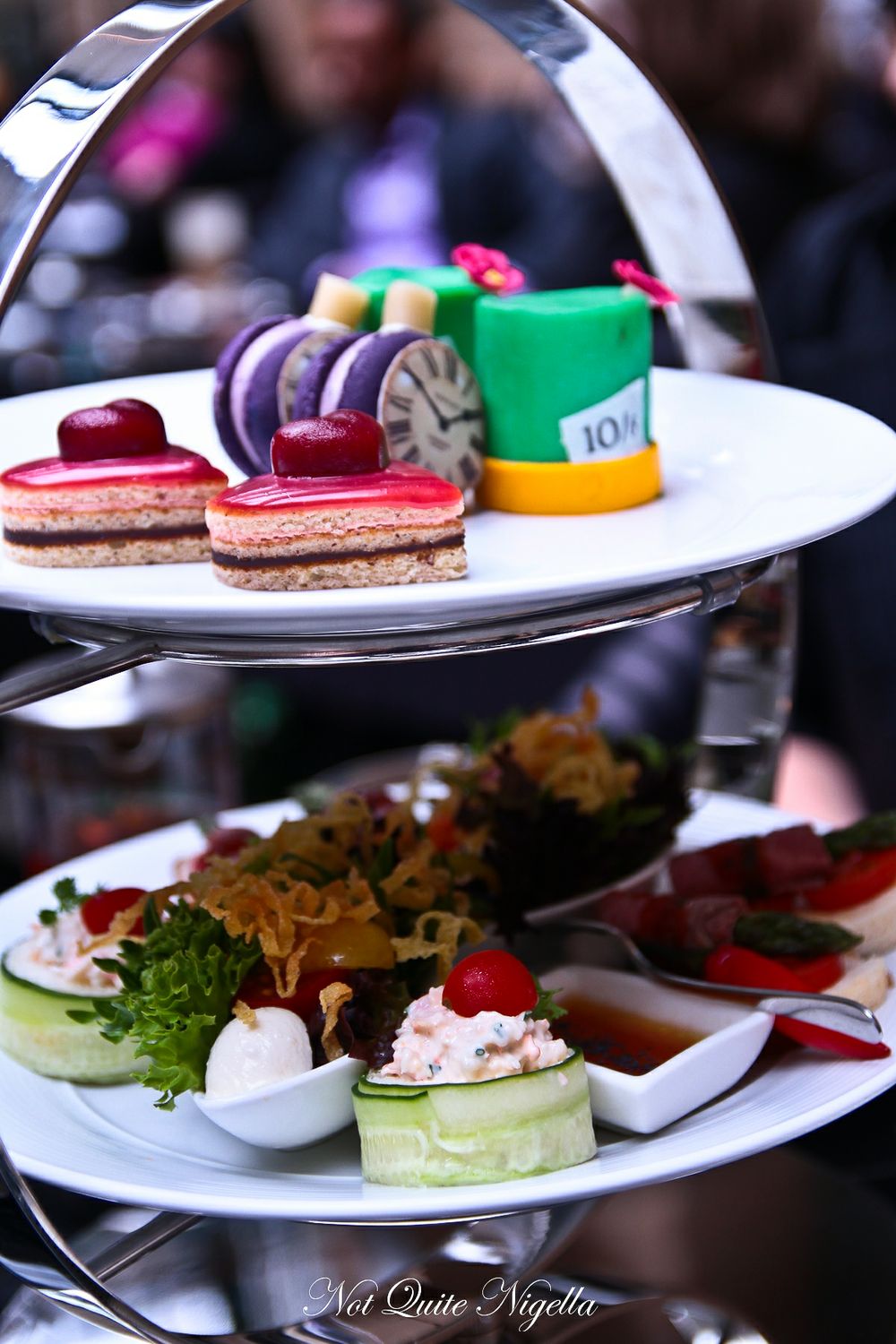 Our two tiered stand arrives a few minutes later and it elicits much admiration. The bottom layer has roast beef and asparagus spears on a slice of mini laugen bread (pretzel bread) which is soft and fresh and portioned as two per person. It's good and nice that there are two but the other morsel with Alaskan crab meat sandwich on a doubled up round of white bread wrapped in cucumber is the favourite and we wish we had two of these. 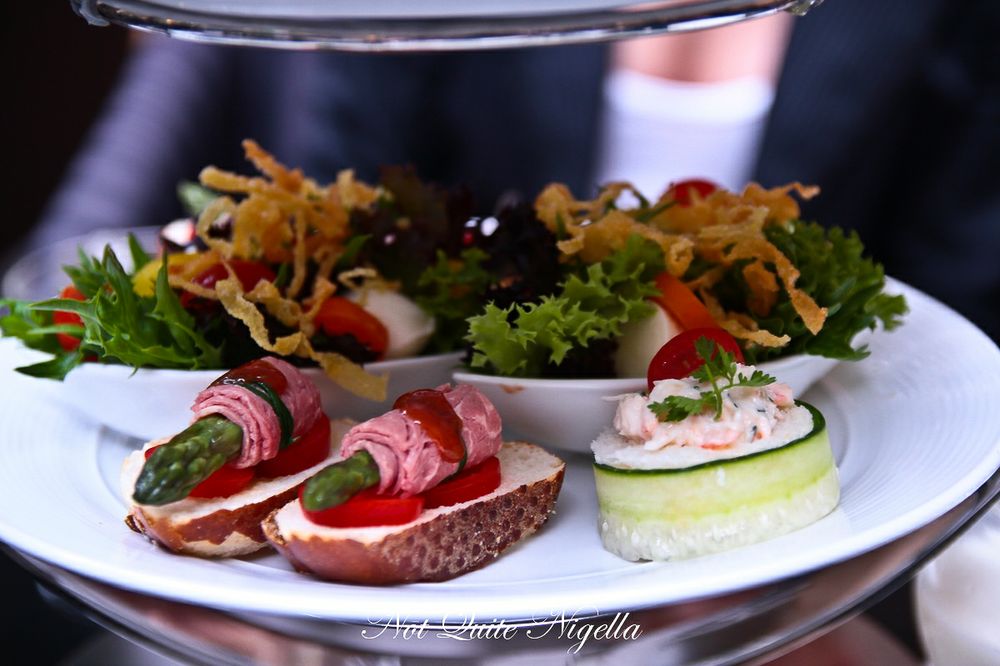 On the savoury stand there's also a small boat of salad with a little container of Asian style dressing with halved cherry and pear tomatoes, bocconcini, green leaves and deep fried wonton shards. It was a little tricky to eat in the small bowl and the Asian and Italian components didn't seem quite in sync and these were mostly unfinished. 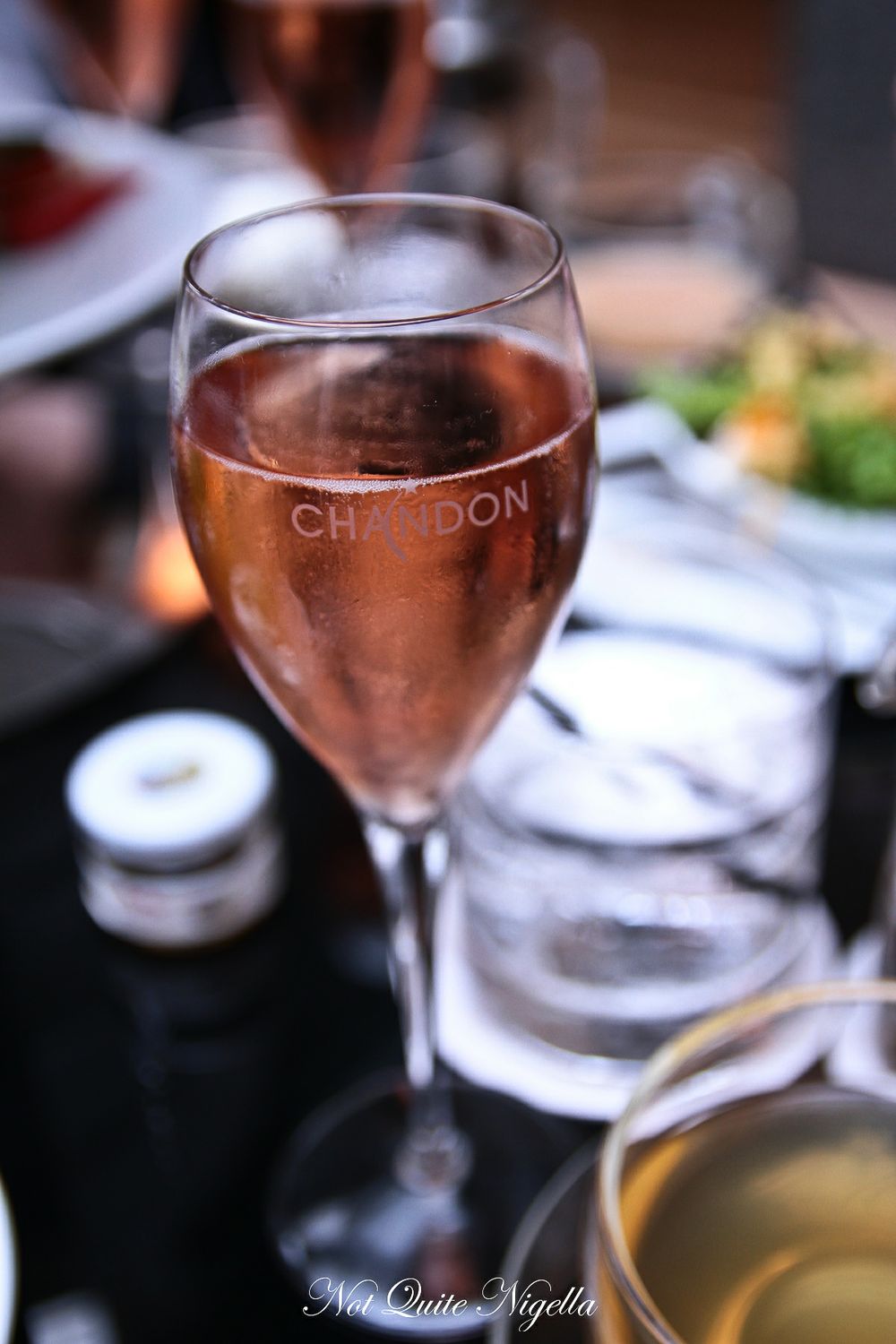 We had better luck on the top tier. And by better luck, we mean that the waiter realised when he put the stands down that the hats were missing their brims. He went to the kitchen and ascertained that there were indeed no brims on the hats and came back out and offered us a glass of R de Ruinart in place of that. To be honest, I don't think any of us noticed or would have complained but that was a nice touch and three flutes of bubbly were furnished. 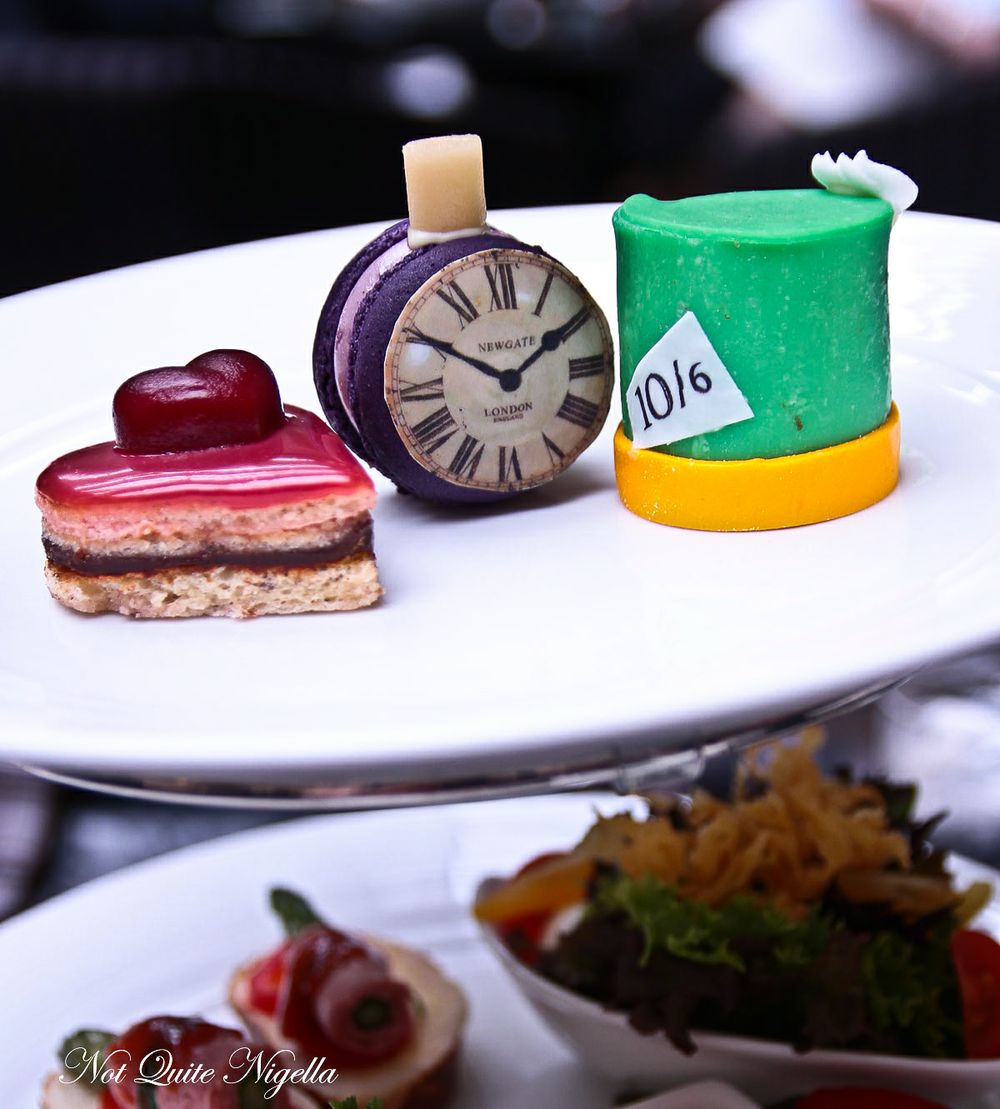 On the top tier, I start with the raspberry heart which is similar to an Opera cake with layers of strawberry buttercream, chocolate ganache and a top of raspberry jelly in a heart shape which gives the cake a tangy touch. The hat is made out of chocolate mud cake covered in fondant and is rich and moist inside. The purple macaron with the adorable clock face is said to have a blueberry cream filling but mainly tastes of buttercream to me. And even though the portions were quite rich, particularly the mud cake hat, I would have loved another taste in the savoury layer. 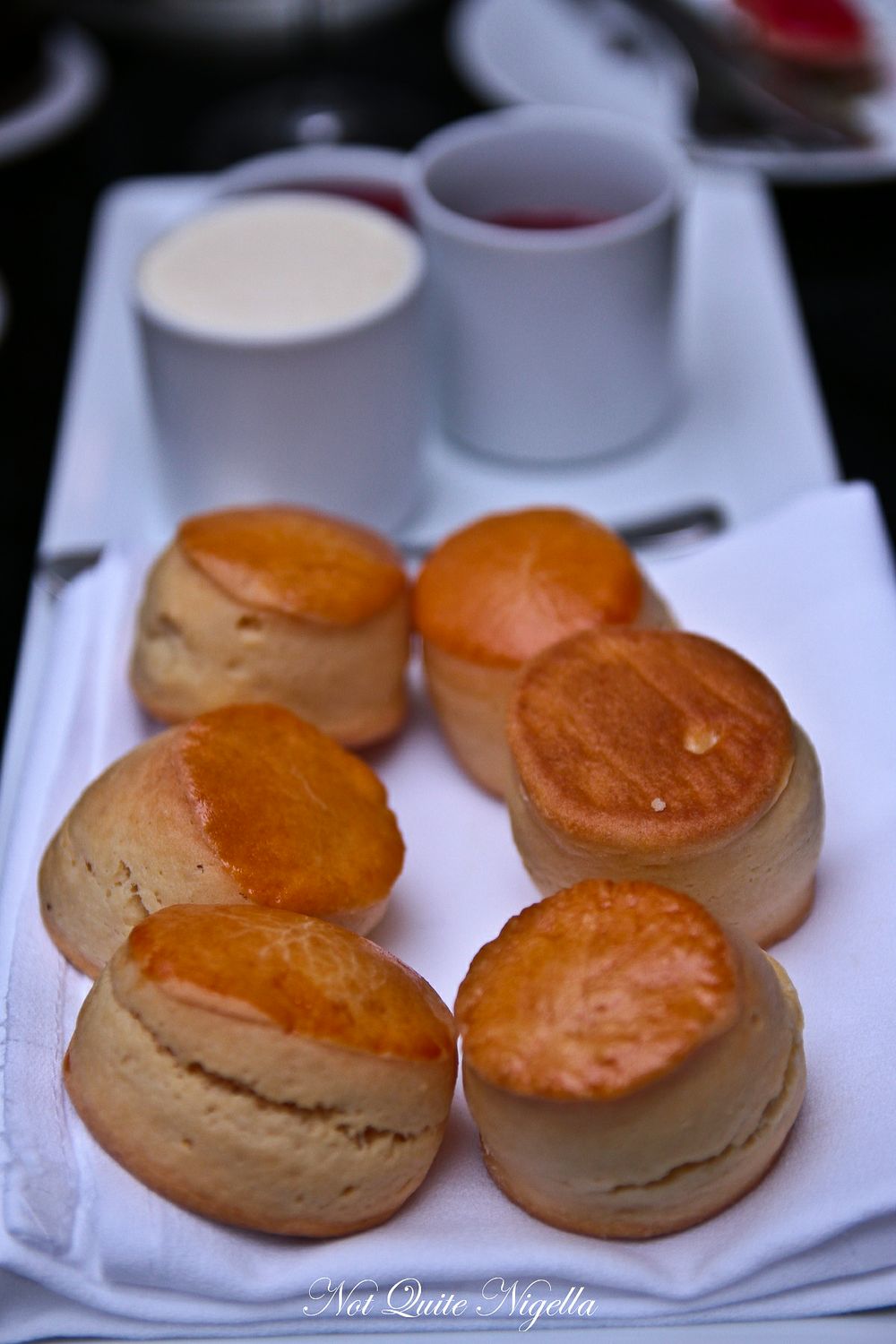 Service from subsequent staff members is polite but a little absent minded and we have to ask for the scones long after they clear the tiers and a request for tea refills is handled a little bit oddly (by the waiter placing all the teapots in front of the same person). The scones arrive and they come as two small scones per person with a pot of whipped cream, strawberry jam and what was said to be a raspberry chocolate jam which was quite tart and reminded us of rhubarb and raspberry compote, except without the pips. The scones are warm and quite good especially with the delicious strawberry jam spread on a thick spread of cream.

So tell me Dear Reader, are you ever cautious when you're out and people are in listening distance? And do you try to not listen in to other's conversations or is it all fair game? 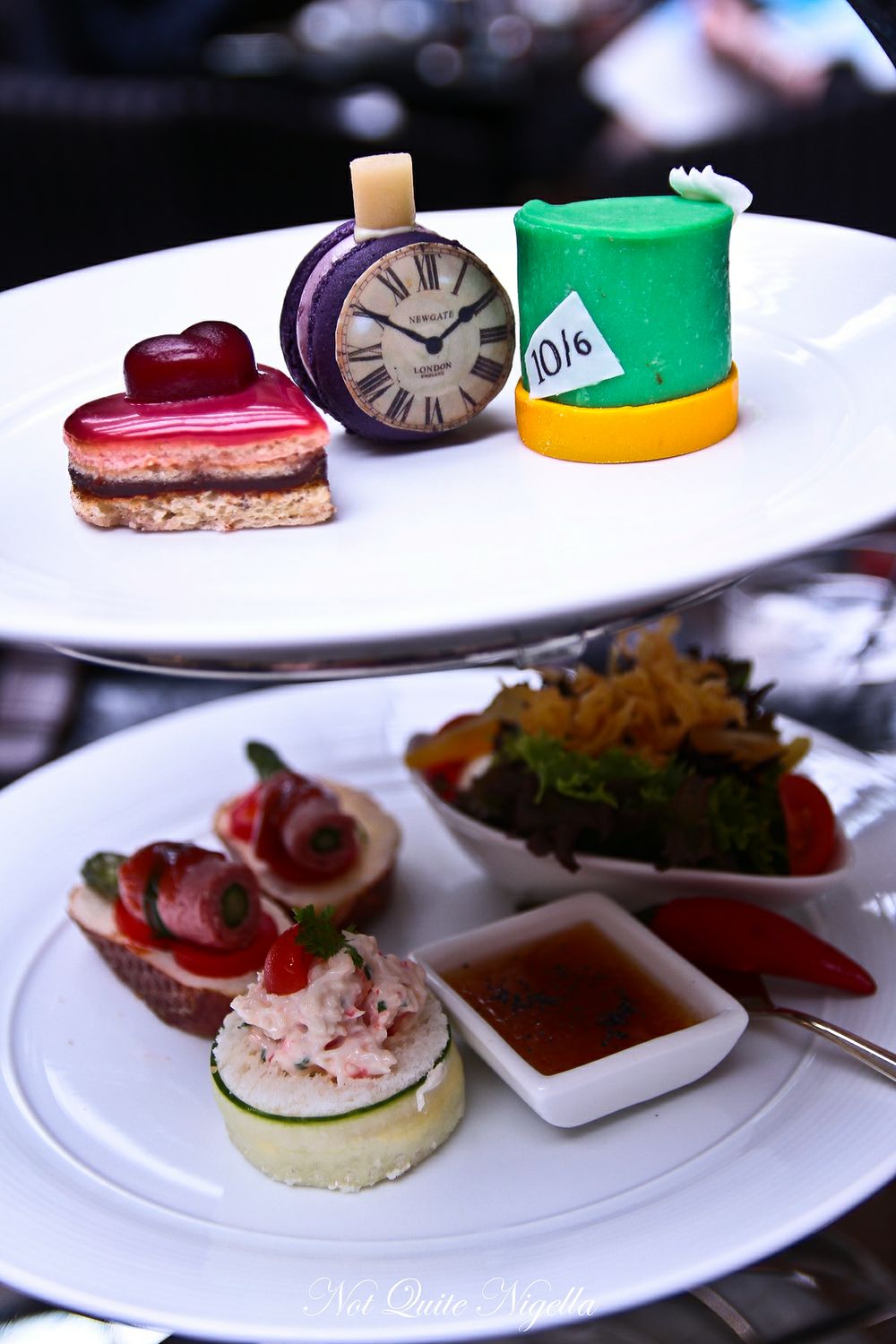 Afternoon tea is served from 12pm-6pm, 7 days a week. 24 hours notice is required. 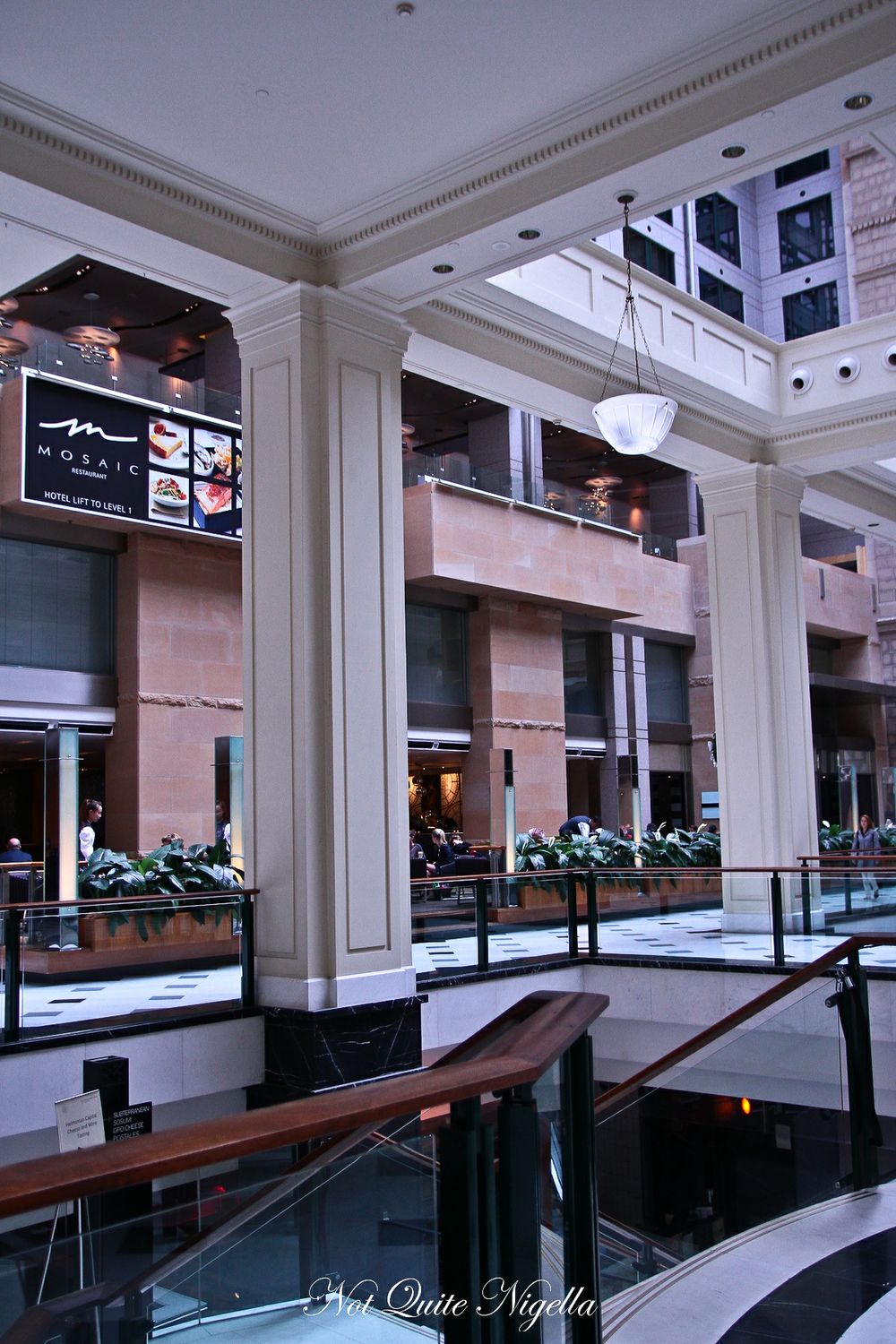