A Twisted High Tea at the MCA Cafe, The Rocks 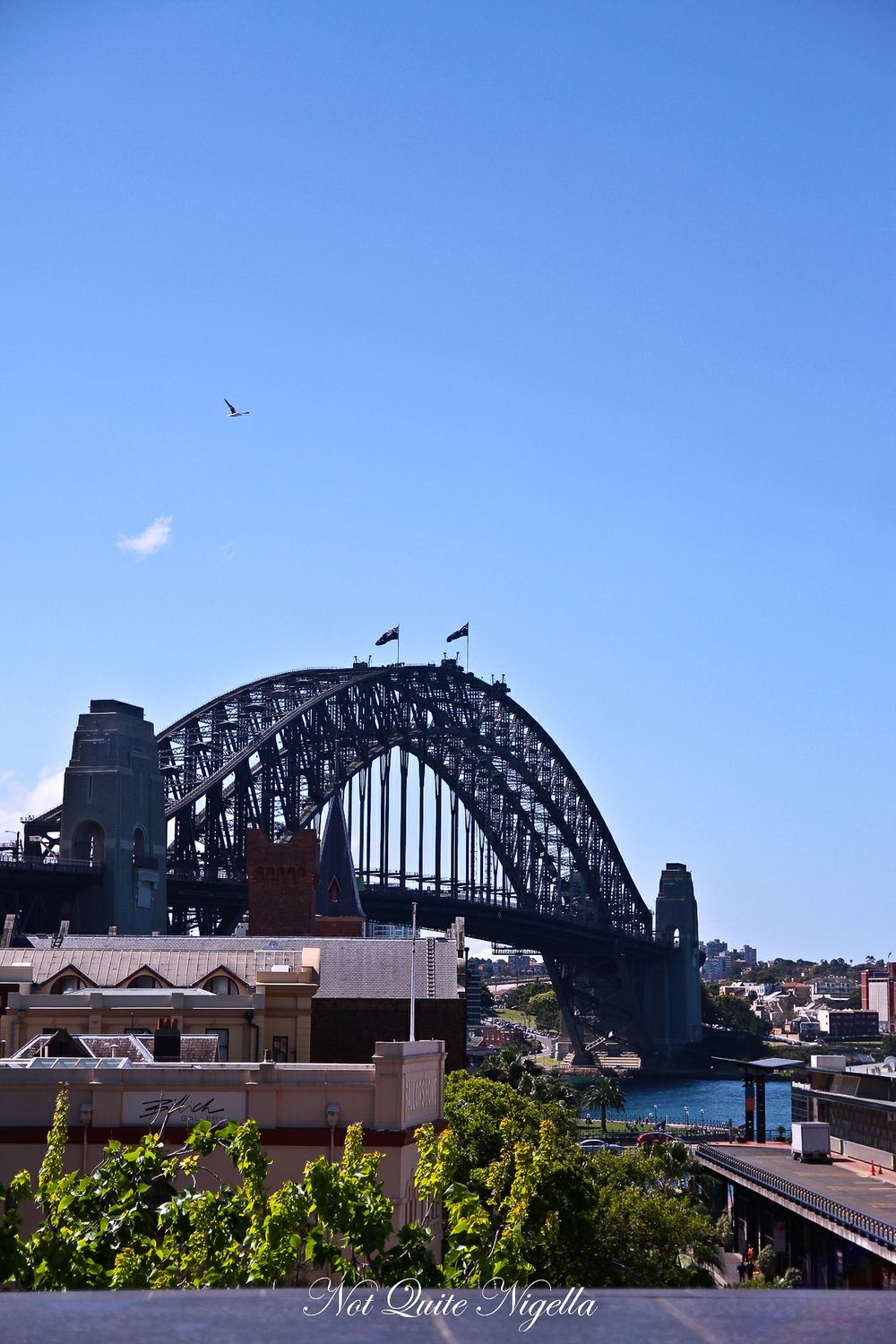 Sydney seems to be in the midst of an afternoon tea epidemic I'm not complaining at all, to me having a range of choices for afternoon tea can only be a wonderful thing. And during the month of October during the Crave Sydney Food Festival, there is a range of no less than twenty three to choose from - that's not including places that aren't part of the festival. 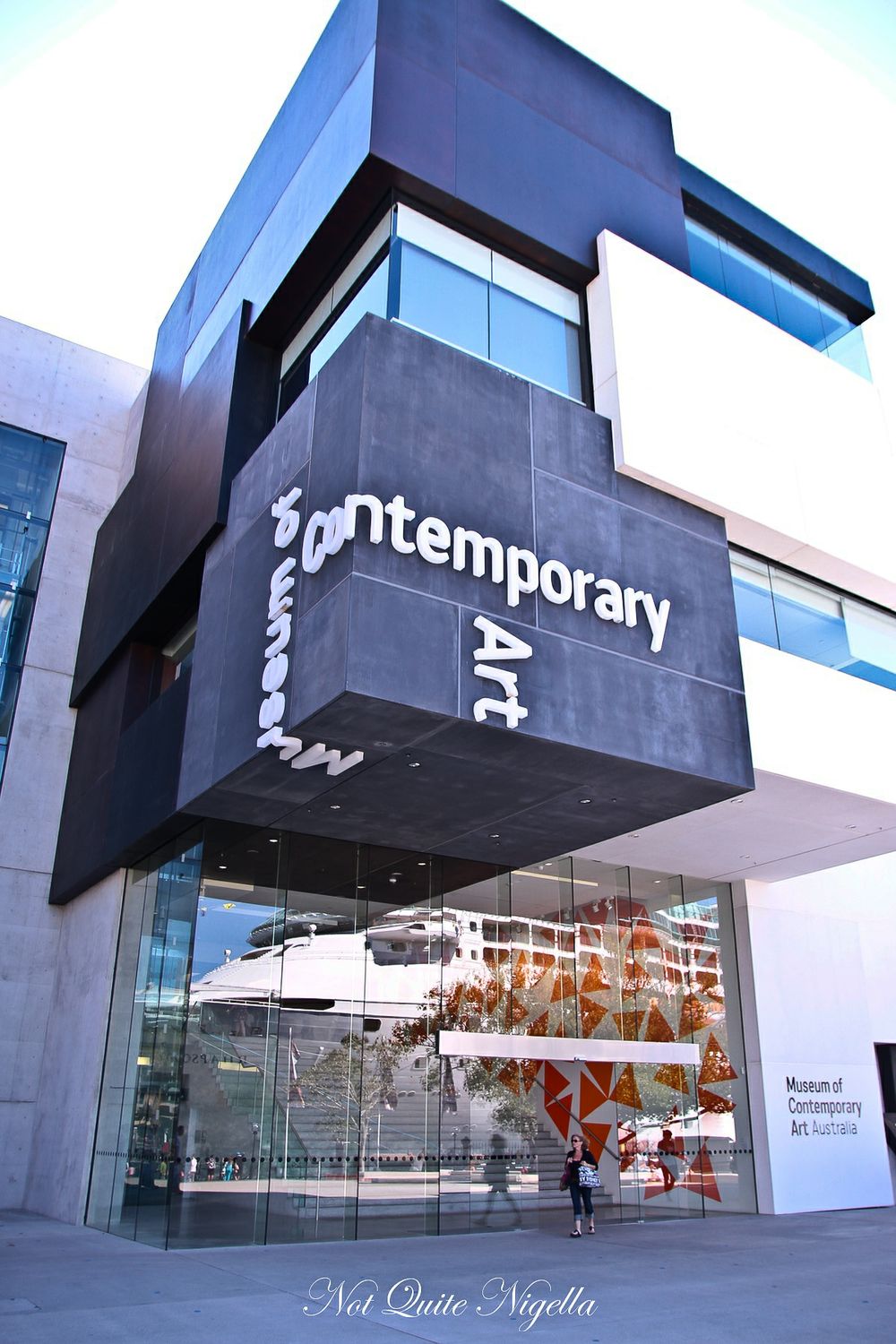 This year, feeling slightly overwhelmed, I escaped to the Northern Territory for the first week and when I came back, I settled down to the task of looking at the festival programme. There were a few events that caught my eye. Like a cookbook, I flick first to the desserts section and here, I went straight for the sweets via afternoon teas. 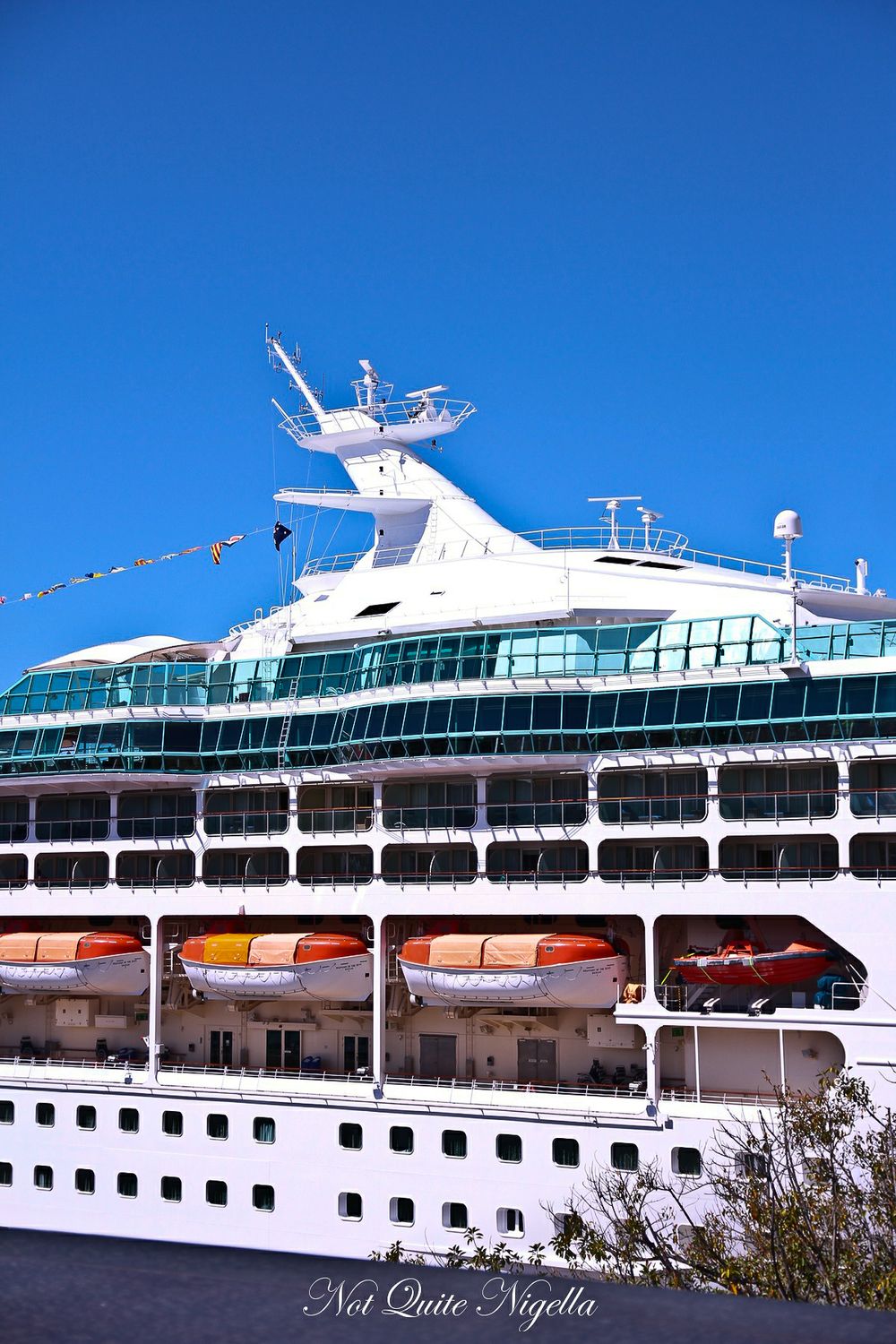 The Twisted High Tea had me intrigued-after all where was the twist? Mysteriously, there wasn't much information on it and then an invitation landed in my inbox to try it that very afternoon. It turns out the pastry gods move in mysterious ways and so a booking was made for a sunny Sunday afternoon yesterday. Mr NQN and I got a bit lost as this was our first time back to the MCA since its redevelopment and there is quite a startling difference. We accidentally go to the MCA restaurant on the ground floor only to be directed upstairs to the 4th floor of the new building. Here, the 6 month old MCA cafe is holding the Twisted High Tea. 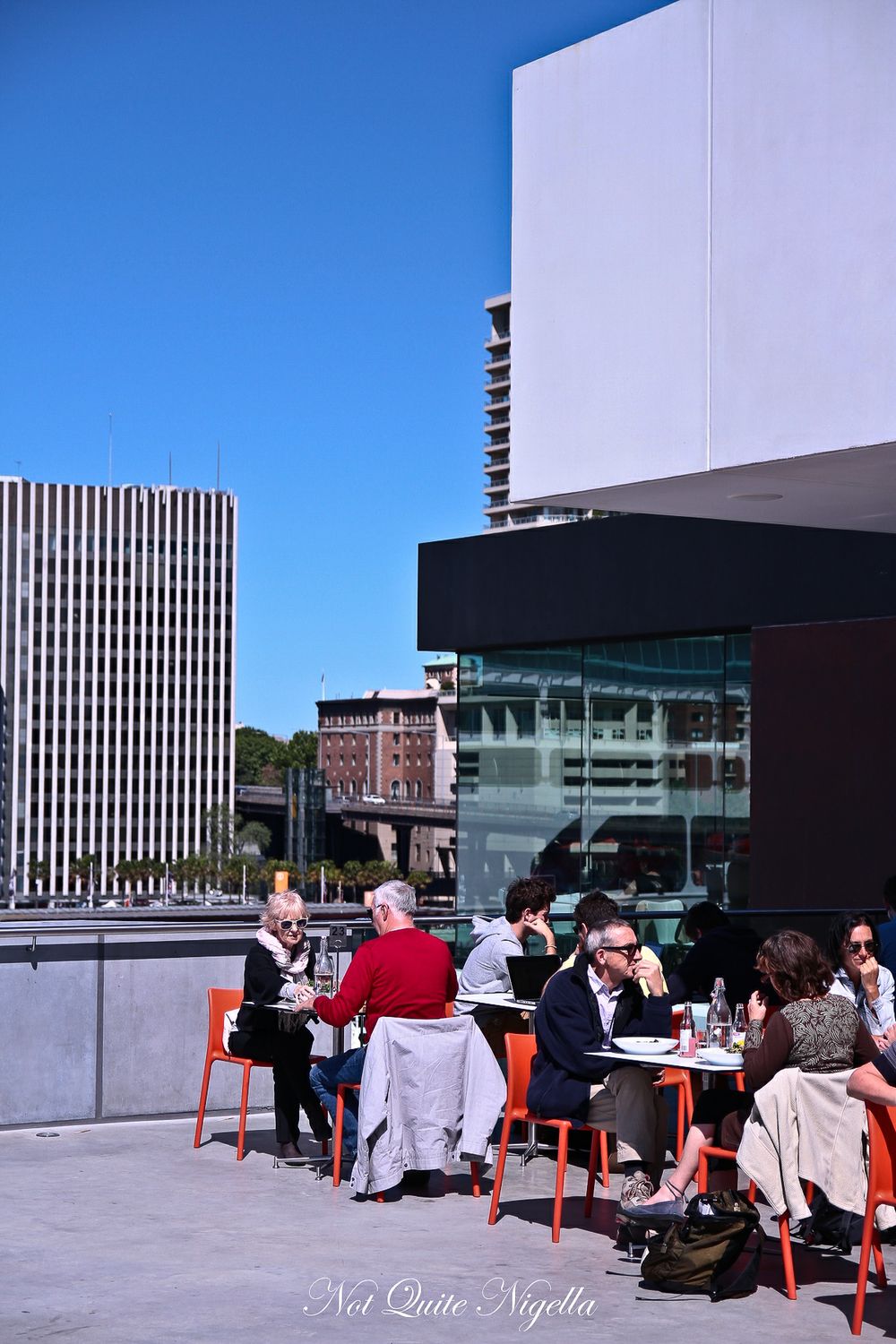 The MCA cafe is not quite completed and there are impending plans to put pink astroturf on the ground as well as more greenery to give it some depth, texture and warmth. At the moment, there is a cafeteria feel to it. Award winning Fresh catering take care of the food here and patrons take a look at the menu and order and pay at the counter and take a number with them to a table. Alas, one of those gigantic ships had just sailed in obscuring the view of the Opera House but no matter, the Harbour Bridge is good. 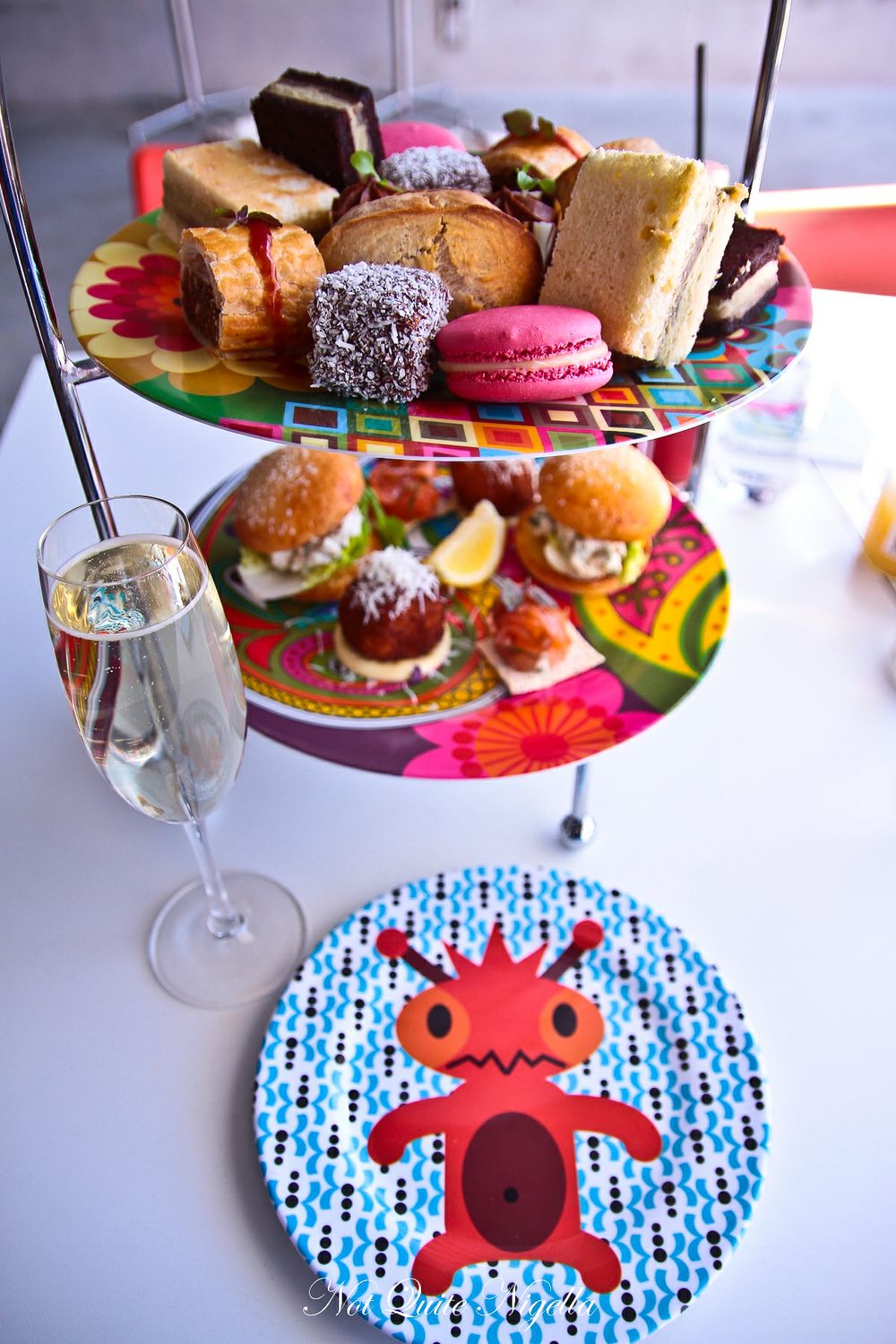 The Twisted High Tea is served on a two tiered stand with a glass of Brown Brothers sparkling wine and is $45 per person. Whilst most other diners are having sandwiches, the tiers come out and there's a flurry of excitement. People coo things like "ooh look it's so pretty!" and the colourful stand attracts much attention. We're given colourful designer melamine and cutlery and napkins come in a little basket. 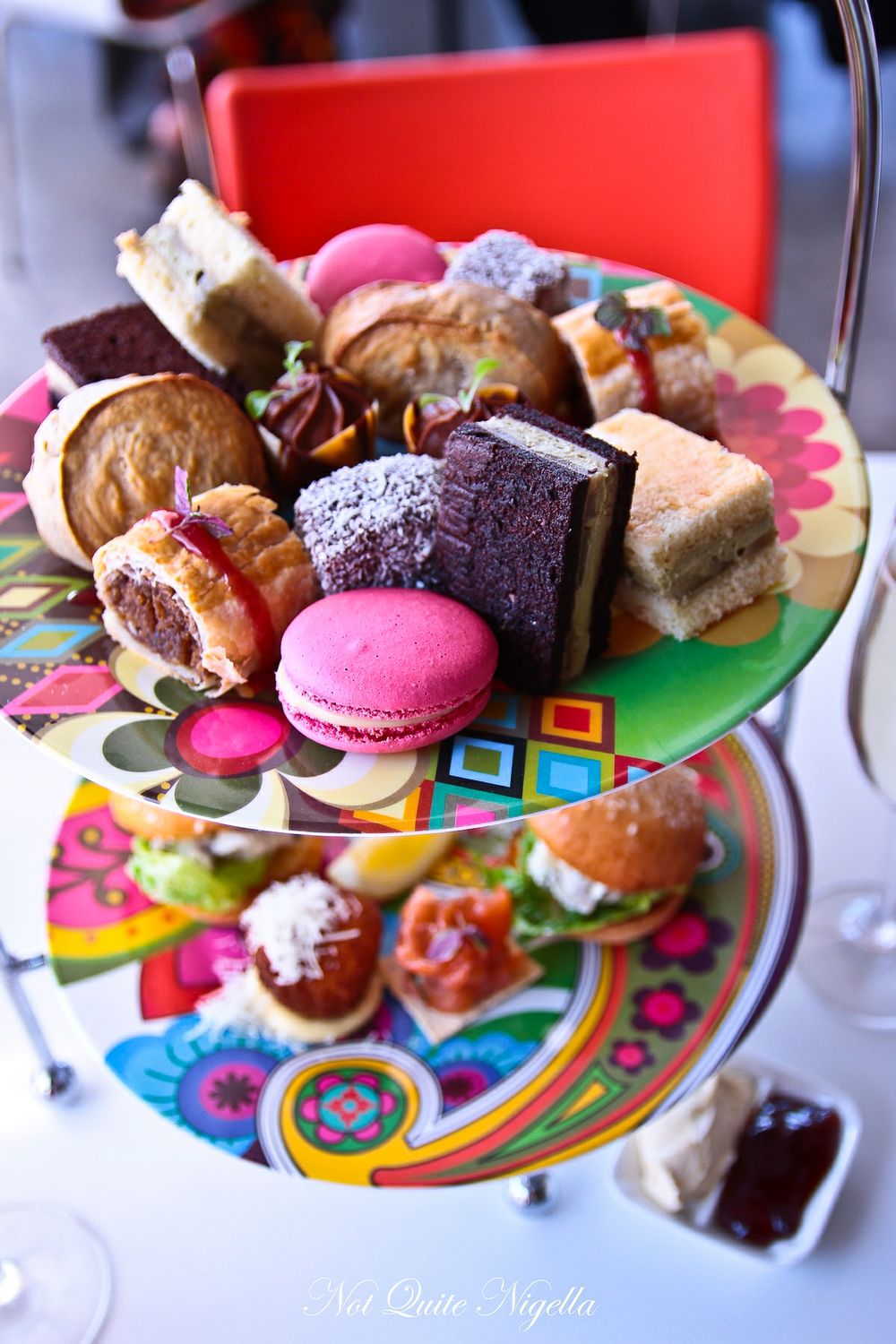 So where's the twisted part? Well if you want a surprise, then it's time to look away ;) We were tipped off as we asked but basically some items appear as savouries but they're actually sweet, other items have surprises in them while others appear as one thing but are another. It's a fun idea and one I can imagine doing at home for a surprise afternoon tea. 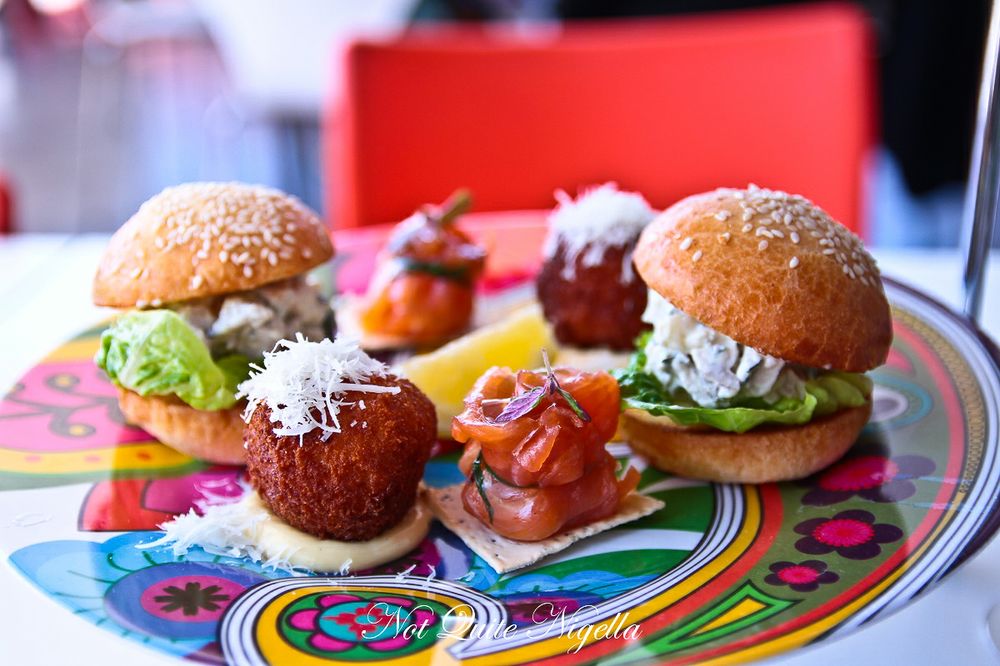 We start with the savouries which I must clarify are actually savoury. There's a sweet brioche bun filled with a fantastic tarragon mayonnaise chicken filling and a crisp baby cos leaf. The second morsel is a crunchy pea and mozzarella arancini with finely shaved pecorino and aioli. The last is a smoked salmon parcel with gin jelly and chive on a crisp lavosh where the gin jelly is surprisingly sweet. It's a nice alternative to ribbon sandwiches and the chicken and the smoked salmon were my favourites although the arancini was also very good. 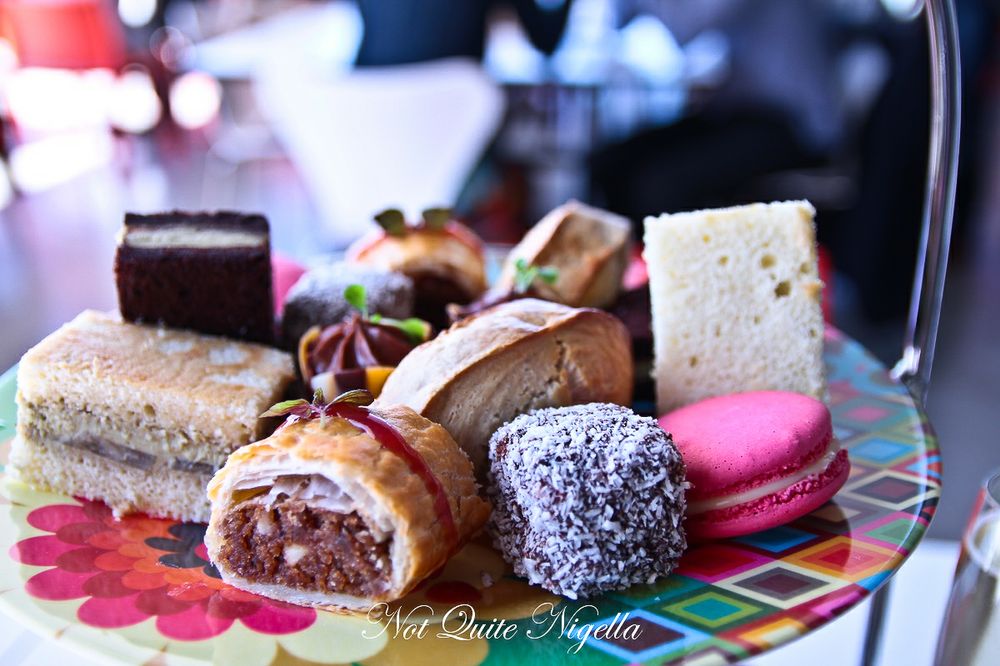 Onto the very crowded sweets layer where not everything is as they seem! There are two sandwiches each, one looks like it's on a black bread with a creamy filling and one on a white bread. Well it turns out that they are both sweets made out of a plain sponge and a chocolate sponge cake, sliced like bread and filled with avocado and pear! I particularly liked the moist dark chocolate one. 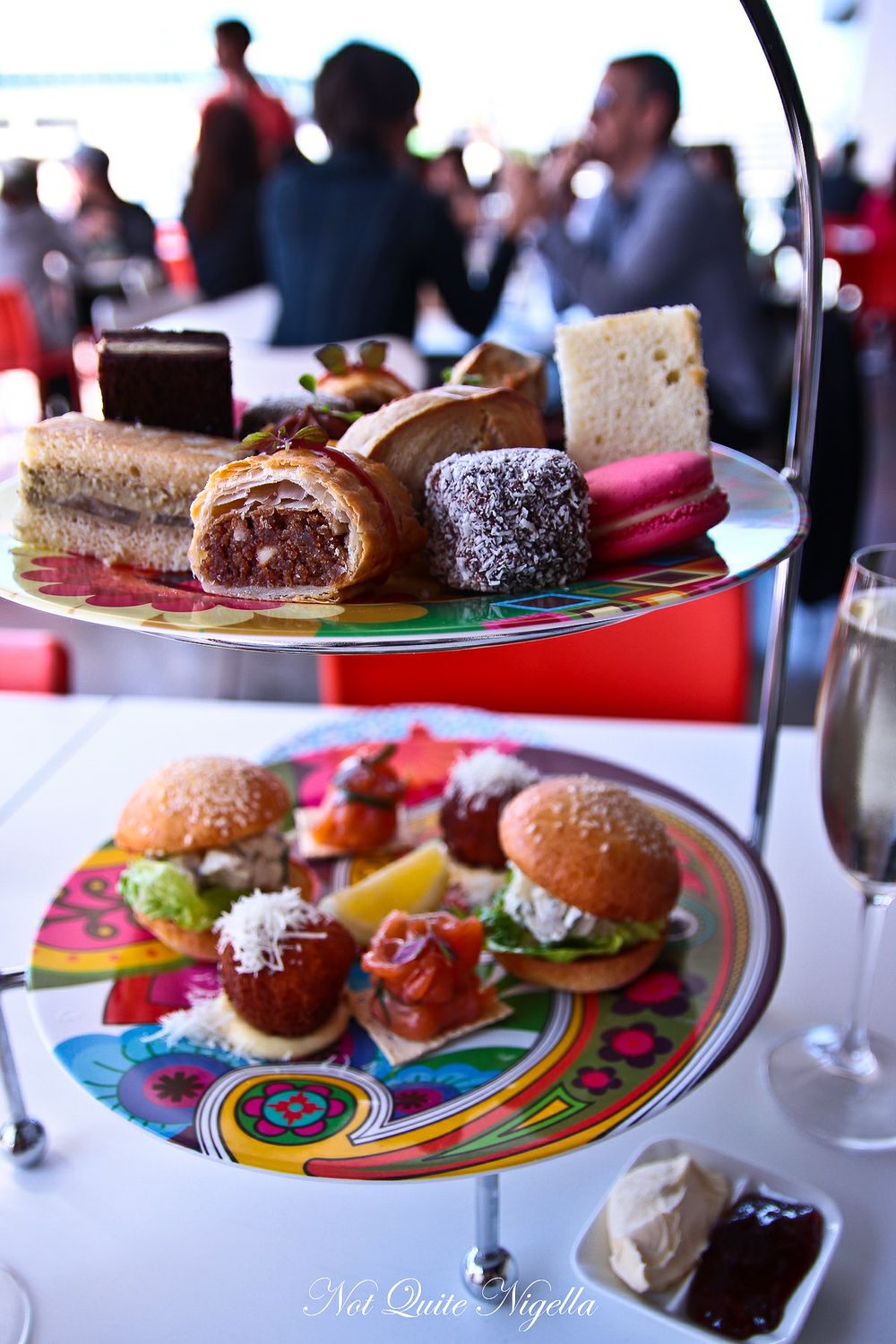 The macarons are said to be cherry griotte and pistachio and I had expected to find a surprise griotte cherry in the centre. The cherry was said to be the pink outside and the pistachio in the filling although truth be told, I didn't really get much cherry.

Mr NQN picked up the strawberry and basil chocolate truffled mousse and I told him that he might want to use a spoon for it. "Nah, I can just shove it in my gob" he said popping it in his mouth and so he did. I ended up licking it out of the cup as there wasn't a small spoon and the mousse was beautifully light with some small stewed strawberries at the bottom. Making my way around the plate, I picked up a sausage roll that wasn't really a sausage roll-it was a hazelnut meal filled pastry with strawberry sauce on top which was another clever idea as it really did look like a sausage roll to me. One of my favourite little morsels was the "lamington" which was actually a vanilla marshmallow coated in chocolate and coconut. 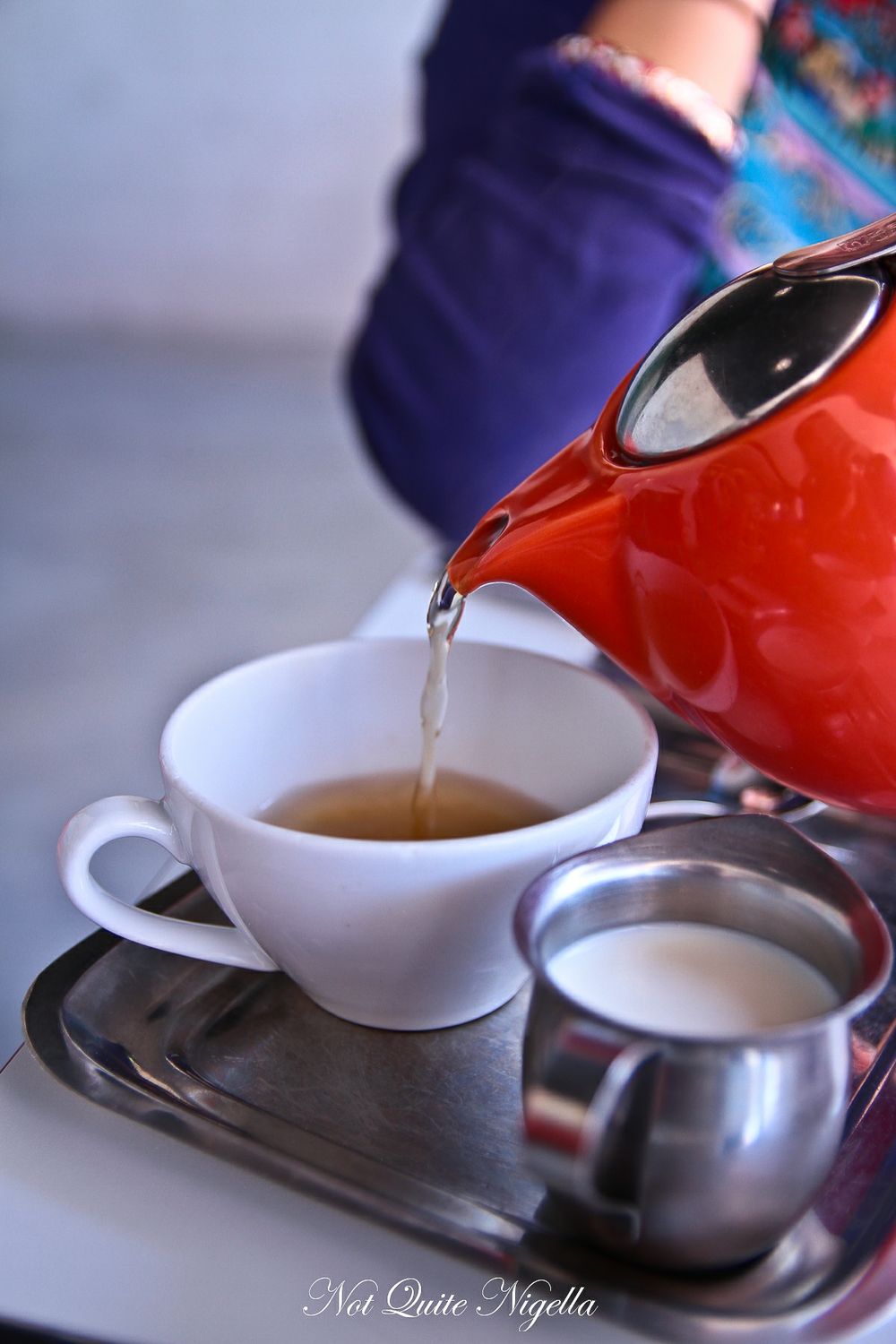 Tea arrived when we started on the sweets and there was a choice of teas. The teas that we received were loose leaf teas which I think come with the high tea although regular teas are T2 tea bags. I was hoping that my chai would be made the traditional way but alas, it is not.

The high tea itself was gorgeous although a part of me wished that the decor matched the food which was tasty and fresh (which I hear it will, as renovations are said to be completed within a few weeks). Some cloth napkins instead of the paper ones that seemed to blow away with frequency would be nice but then again, it is a cafe so perhaps it's not what they are aiming for. And normally, when there is no ship blocking the view, then I'm sure that the view is decor enough.

So tell me Dear Reader, do you like modern afternoon teas or traditional ones? And when you get a cookbook, do you read it in order or do you skip through to the desserts or another section? 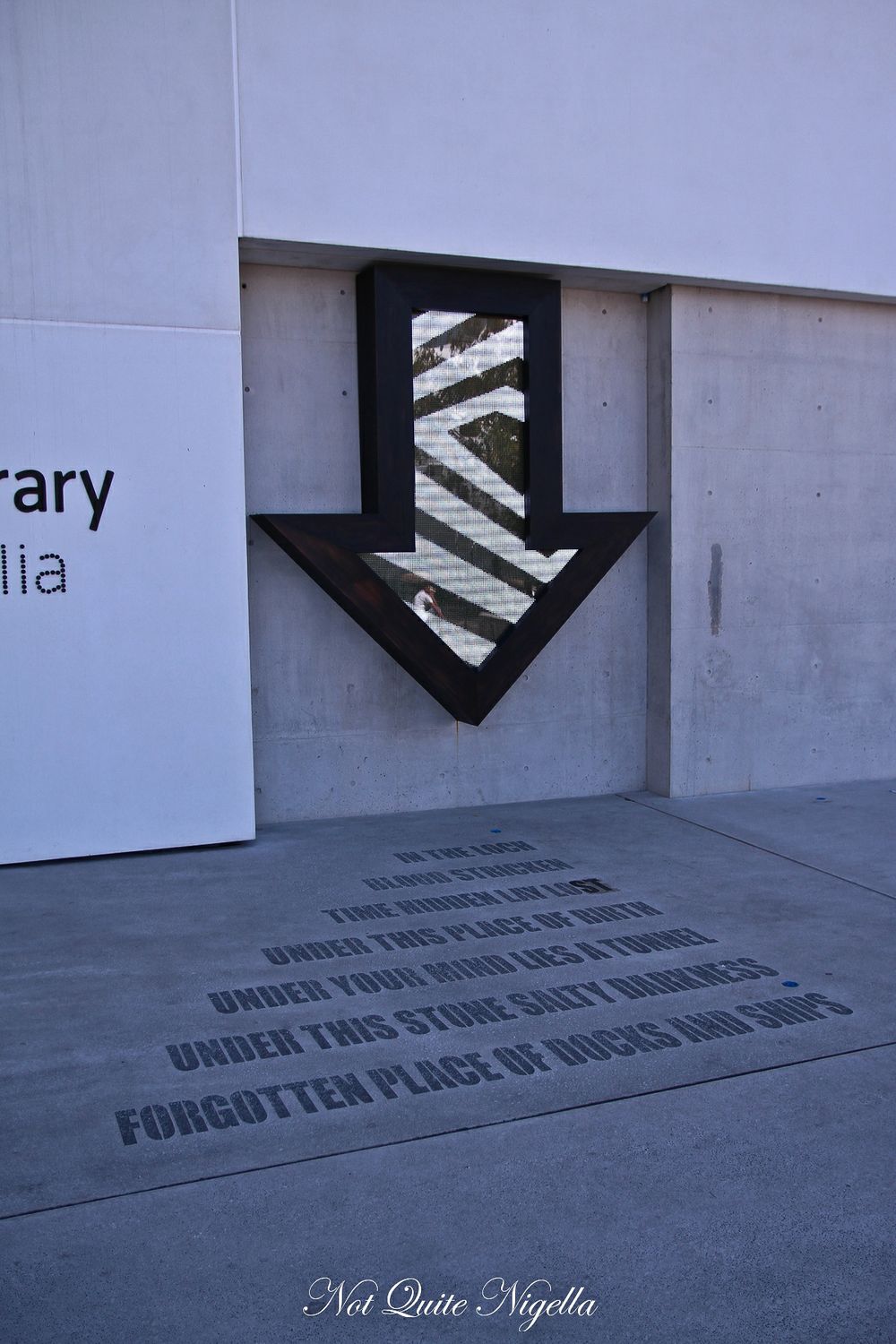 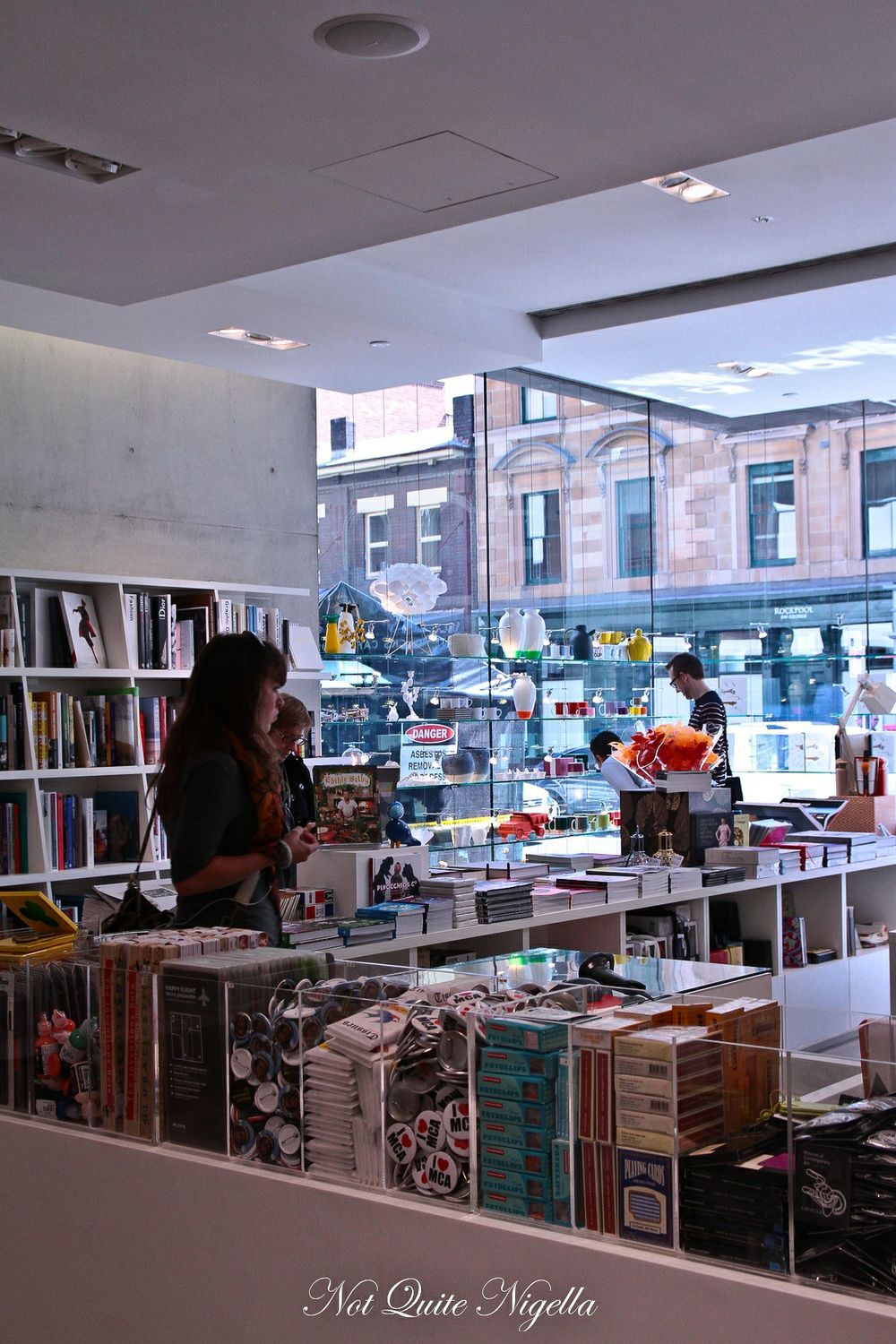 The MCA shop-where my credit card goes to lose weight ;)