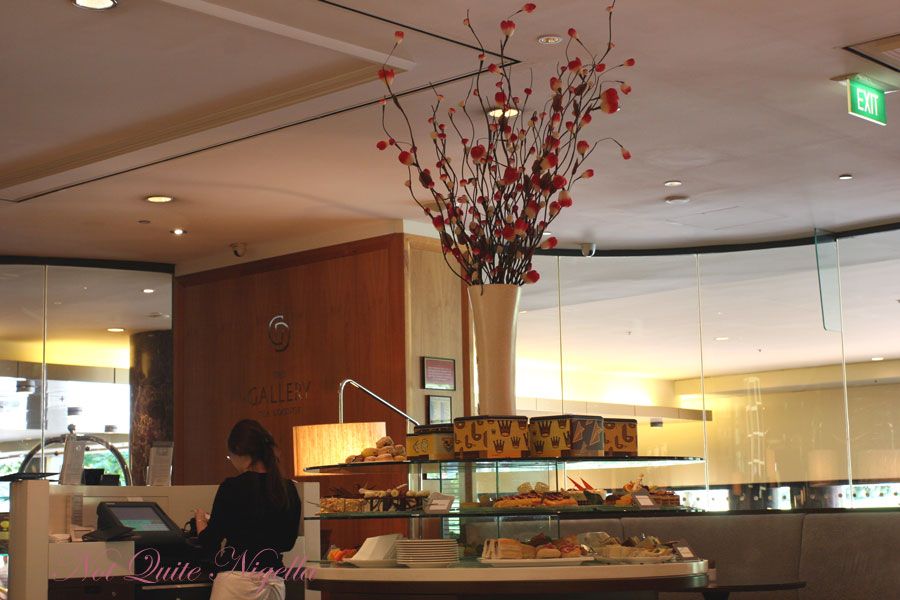 Yes I admit I have a minor unhealthy obsession with afternoon tea or morning teas. I love dainty little servings and a good cup of tea so I am sucker for anything vaguely constituting afternoon tea. The good thing about the Sheraton's afternoon tea offering is that you can get a traditional afternoon tea with scones, finger sandwiches and tarts or you can go for the contemporary afternoon tea which comprises of delicious tidbits like Lobster slaw martini, swimmer crab omelette, Banana cheesecake, white chocolate brownie and the drool inducing list goes on. 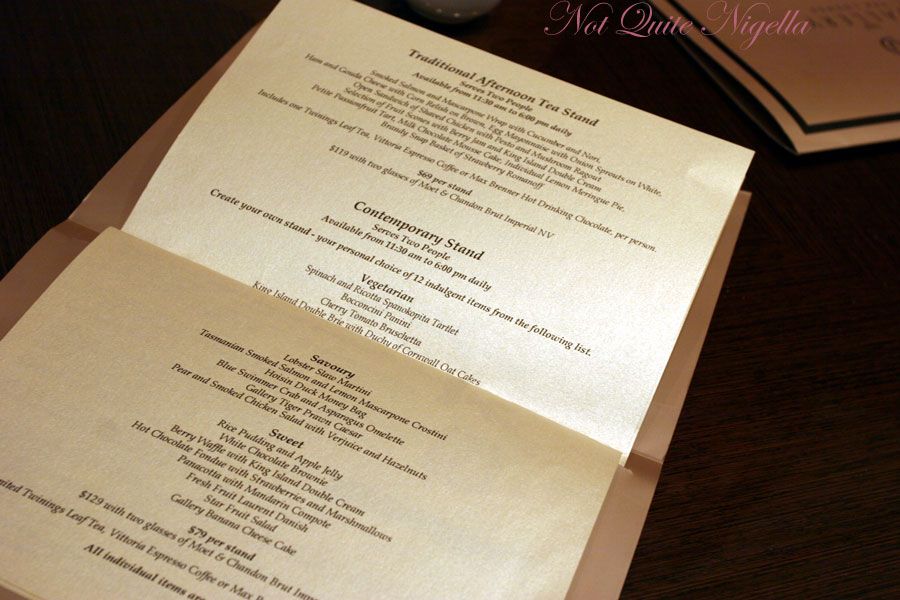 We always order the contemporary afternoon tea. Whilst the traditional afternoon tea looks lovely, I cannot pass up the Lobster Slaw Martini or the Gallery Banana cheesecake. We know the menu so well ordering is easy. For $79 you can order any of the 12 dishes and 2 unlimited drinks are included (your choice of Twinings leaf tea, Vittoria espresso or Max Brenner Hot Drinking Chocolate). For $129 you get a choice of any of the 12 dishes but with two glasses of Moet & Chandon Imperial N.V. Additional dishes are available for $7 each. 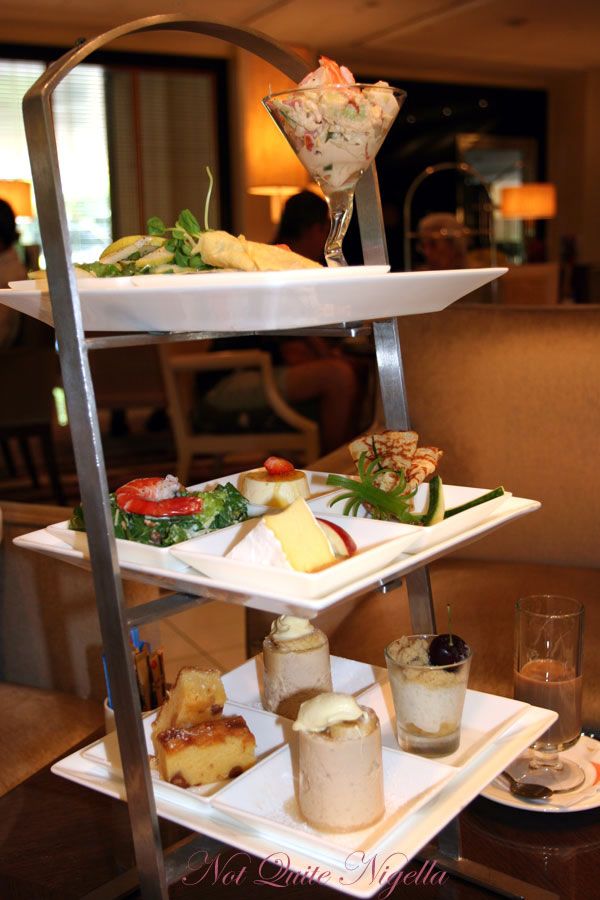 We order the King Island Double brie with apple and Duchy of Cornwell Oat Cake; Lobster Slaw Martini, Tasmanian Smoked Salmon and lemon mascarpone crostini; Hoisin Duck Money Bag; Blue Swimmer crab and asparagus omelette; Gallery Tiger prawn Caesar; Pear and smoked chicken with verjuice and hazelnuts; Rice pudding and apple jelly; White Chocolate Brownie; Pannacotta with mandarin compote and, because they're my absolute favourite and the idea of sharing one alarms me, 2 of the gallery Banana cheesecakes. Blythe's favourite part of the afternoon tea is the endless top ups of Max Brenner White Hot Chocolate-usually $5.50 a cup, she can drink cup after cup of the rich milky liquid chocolate concoction so it feels like she is getting much more than her money's worth. I order my usual standby, a pot of Earl Grey and settle back into the club chair and relax. 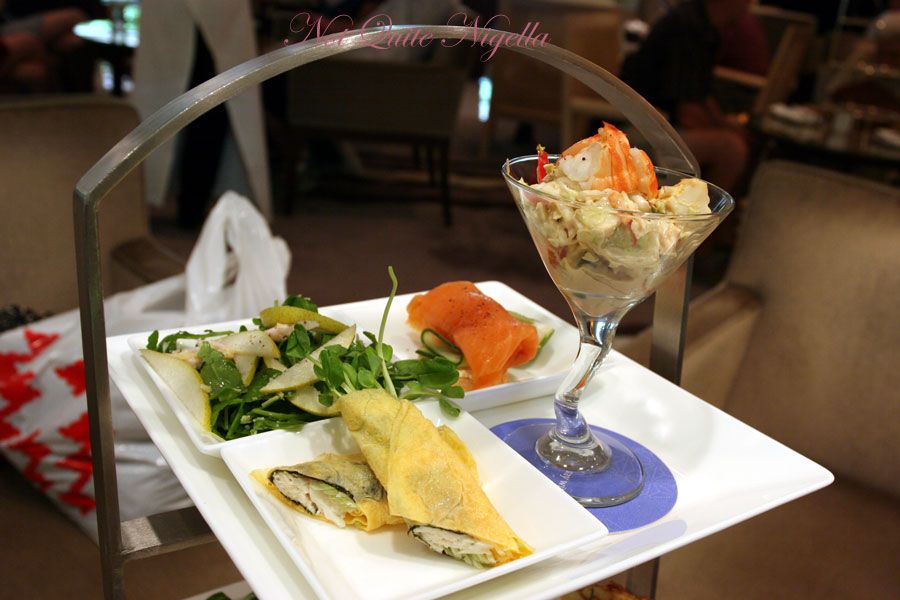 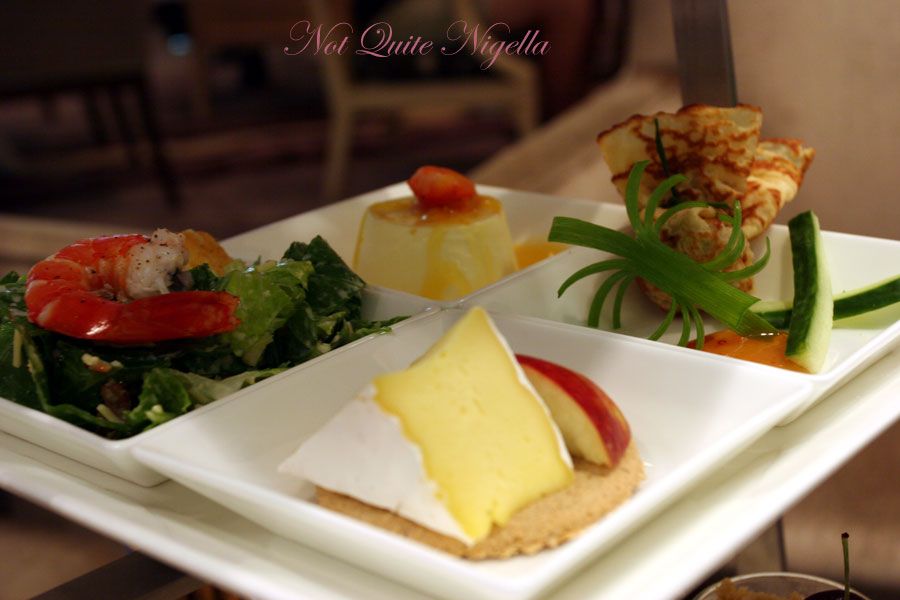 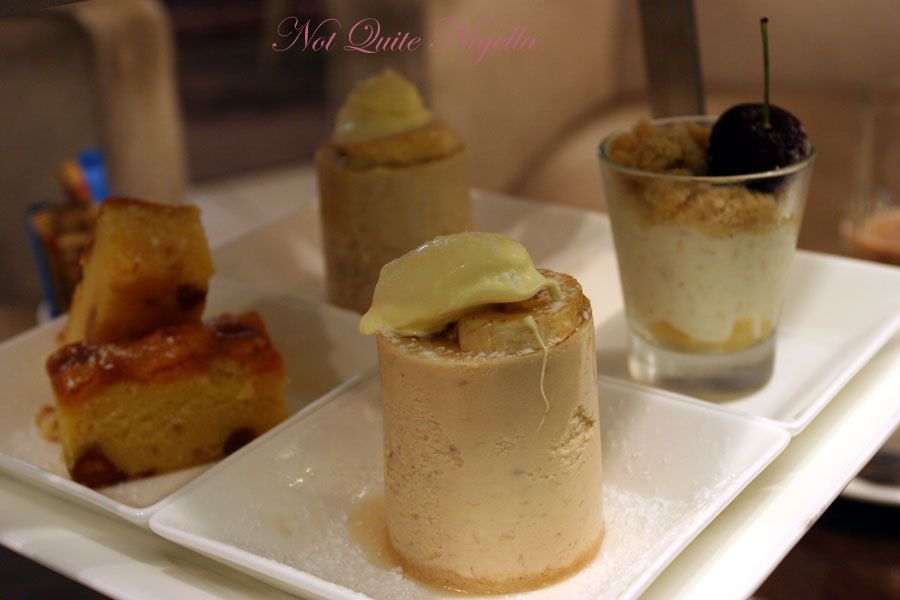 Our drinks arrive first and 20 minutes later our three tier stand arrives with three large square plates each with 4 smaller plates on top. The savouries are at the top while the sweets are at the bottom. 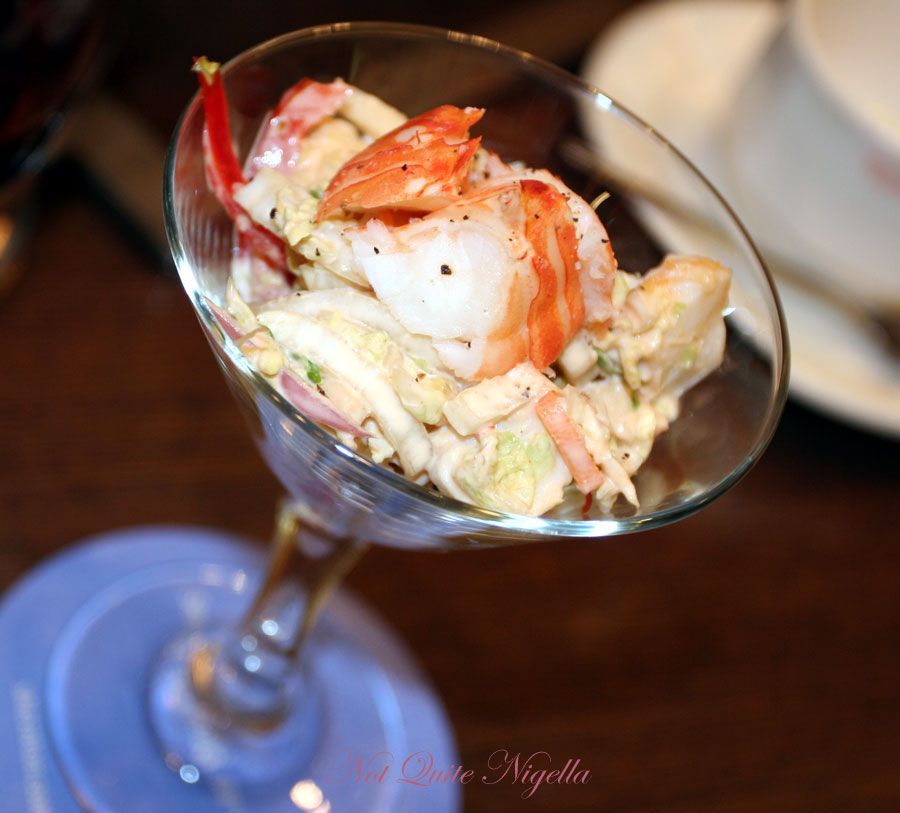 After a flurry of photo taking, I dig in starting with my favourite item, the Lobster Slaw martini. Four chunks of lobster sit on top of a creamy crunchy coleslaw which has shredded lobster throughout. If I didn't love everything else I'd order 4 of these. 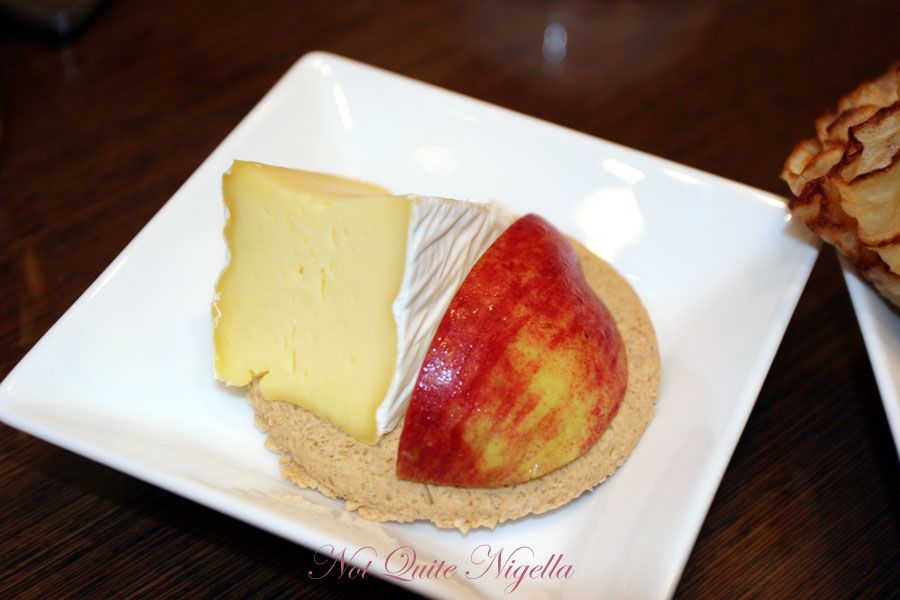 Next I select the King Island Double brie with apple and Duchy of Cornwell Oat Cake. I like milder cheeses and this King Island Double Brie is a creamy wedge of heaven, the sweet red apple a crisp and juicy contrast to the dry but rich in oat biscuit and rich cheese. 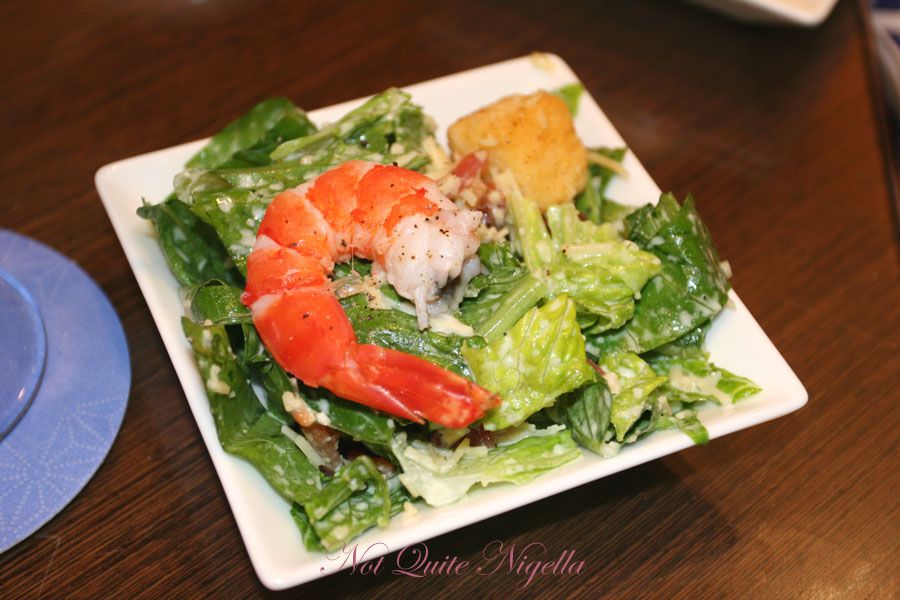 Two salads are next, the gallery tiger prawn Caesar is first. I love Caesar salads provided the dressing is good and the bacon is small and crisp but not too crispy. The salad is perfect, the dressing creamy and parmesaney enough to satisfy and the small chunks of tasty bacon are fabulous with the addition of the sea salty tiger prawn. 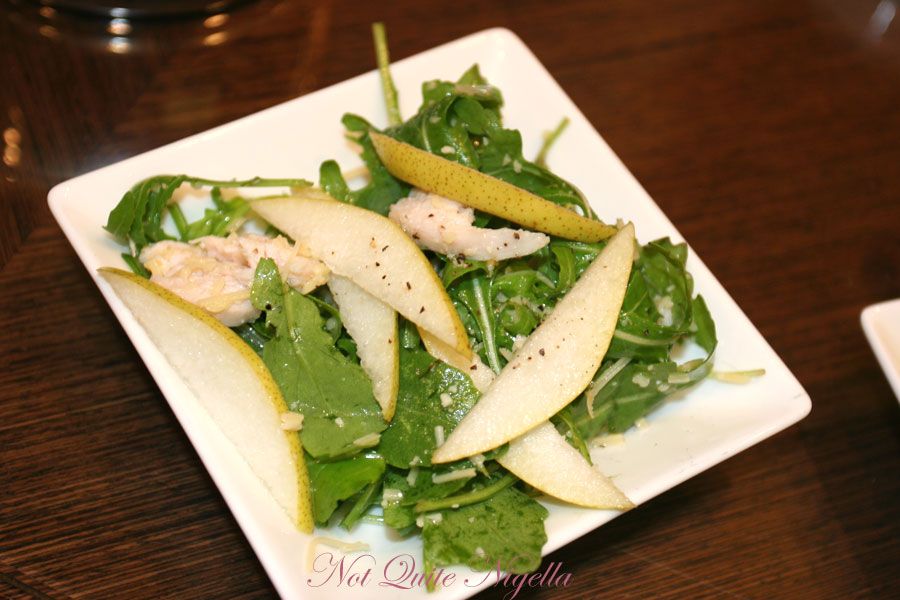 Smoked chicken salad and pear salad with verjus and hazelnuts

The smoked chicken salad and pear salad is good and feels virtuous by comparison, the verjus providing a light tangy dressing, the hazelnuts a lovely nutty crunch and the chicken soft and lightly smokey and the paper thin pear crisp and juicy. 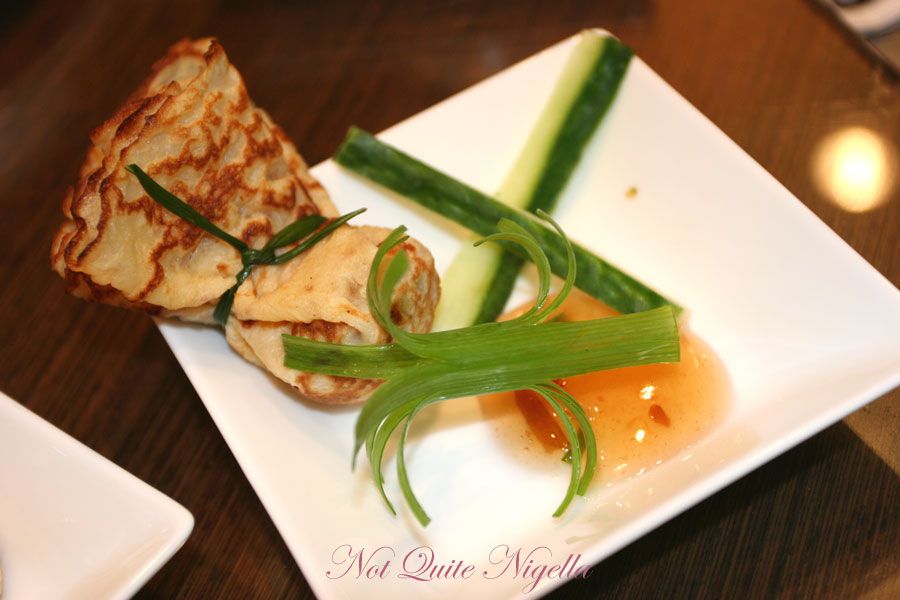 The hoisin duck money bag, although looking quite adorable with its spring onion tie is not quite as successful being mostly devoid of any filling and the money bag being a crepe too thick to go with the light serve of duck. 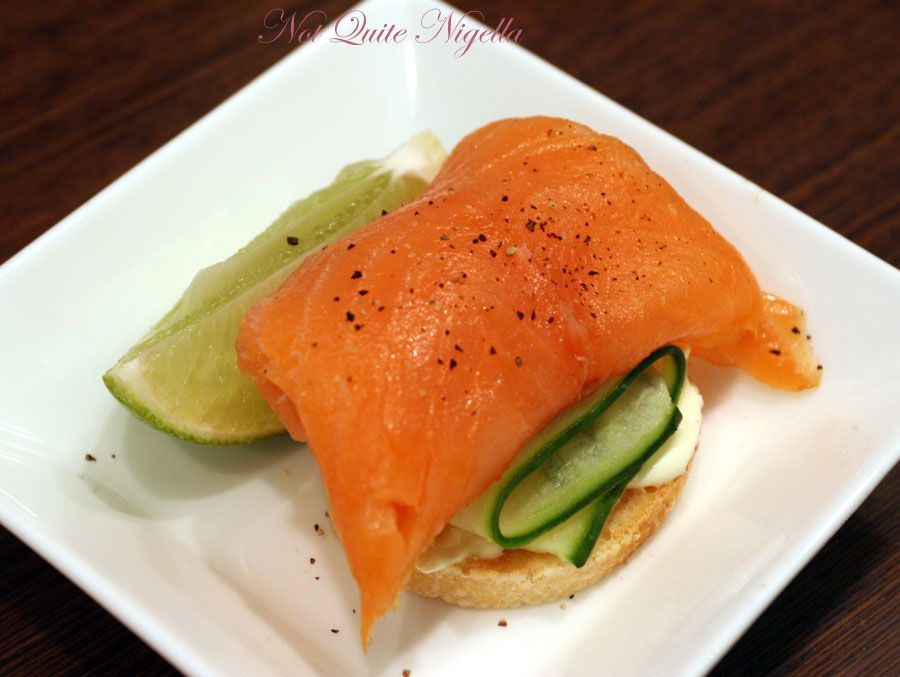 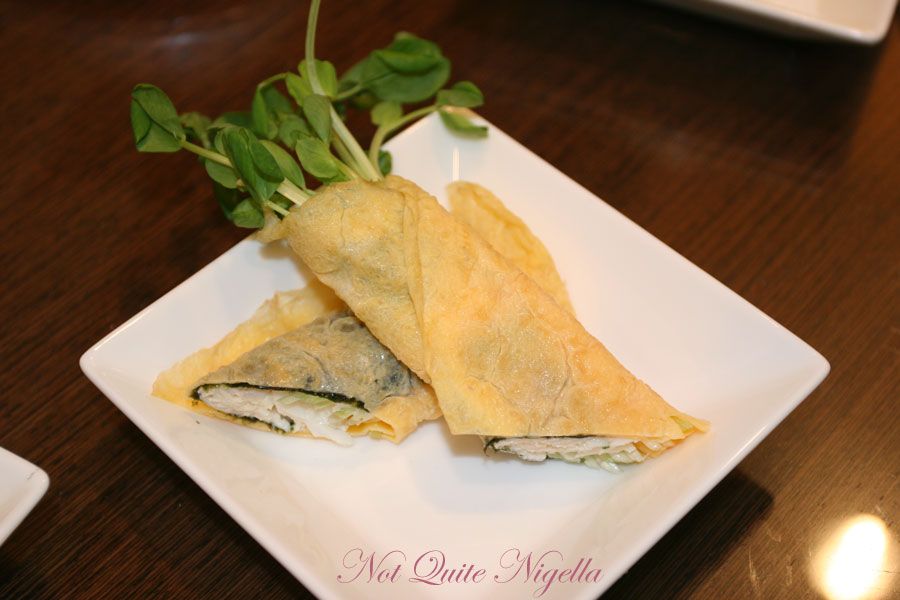 Last of the savouries is the Blue Swimmer crab and asparagus omelette. The omelette is sliced in half and the asparagus is a lovely complement to the delicate crab meat, never overpowering it. 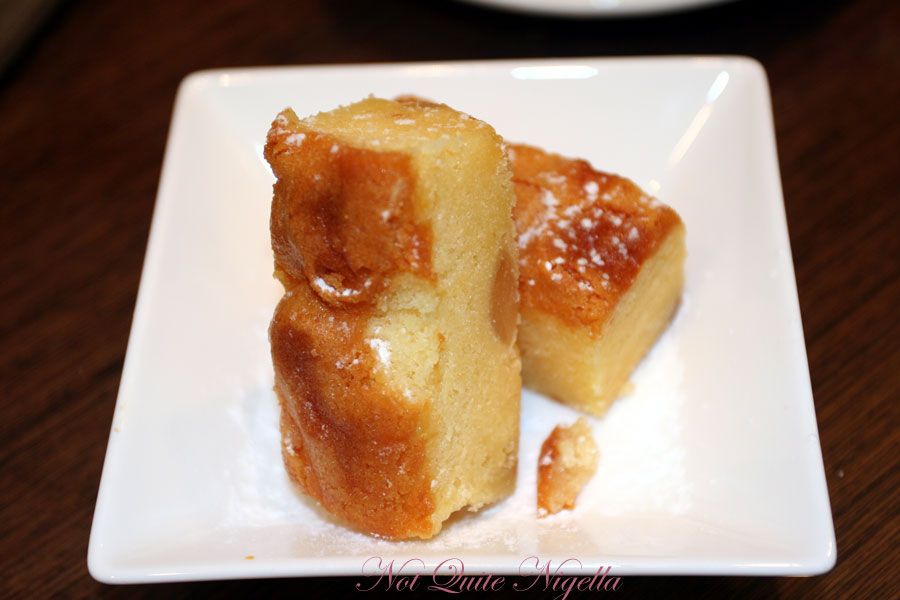 Pausing for a moment, we contemplate our sweets and I try the white chocolate and macadamia brownie first. These brownies have inspired many a brownie batch baking as they are deliciously moist, the most moist of any brownie I've eaten and are studded thickly with roasted macadamias. 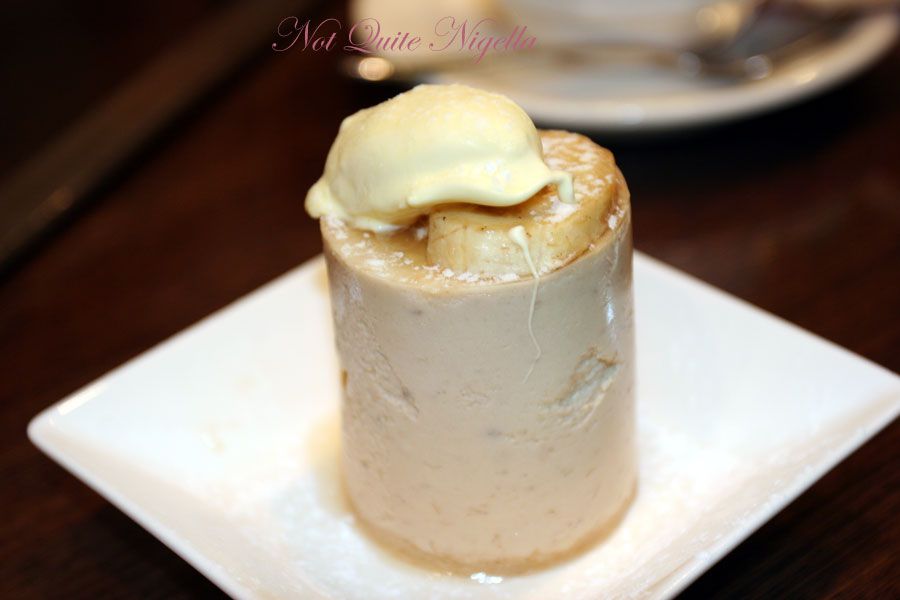 I've saved my favourite Gallery banana cheesecake for next. Its not a typical cheesecake texture as its fluffy and mousselike, more like a Japanese cheesecake. Its full of real banana, there's no fake banana to be had here, and as always its delicate and melts in the mouth. I hold back from bursting into the kitchen and demanding a recipe although you can believe I googled my bottom off trying to find a recipe sadly to no avail! 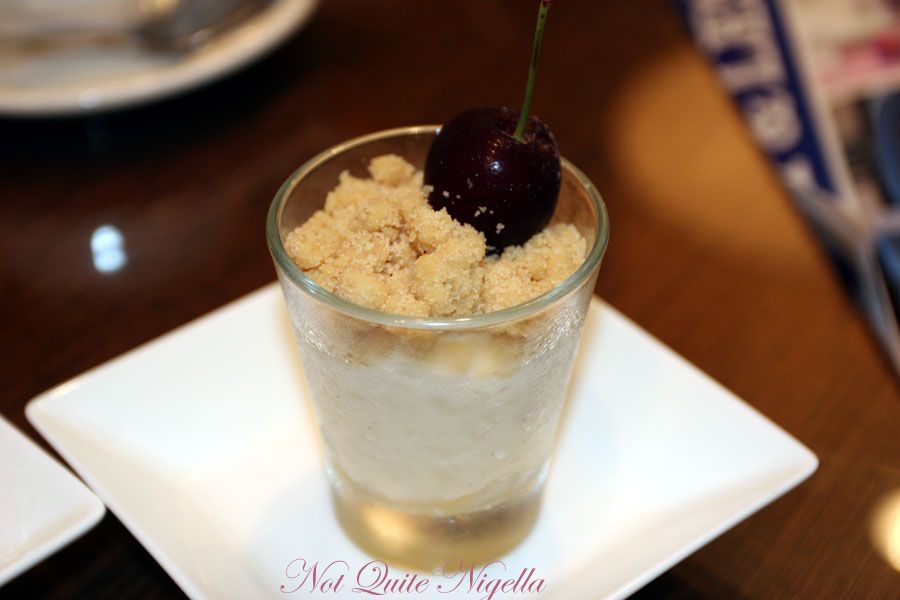 The adorable little shot glass of rice pudding has sweetened apple in jelly sitting at the bottom, then a layer of vanilla rice pudding upon which brown sugar crumble topping sits. As I am getting incredibly full, I take a tentative taste, the rice pudding isn't quite as soft as I'd like it and the vanilla scent is faint, if non existent. If I were hungry I'd devour it still but as I'm full, its a good excuse to put it back. 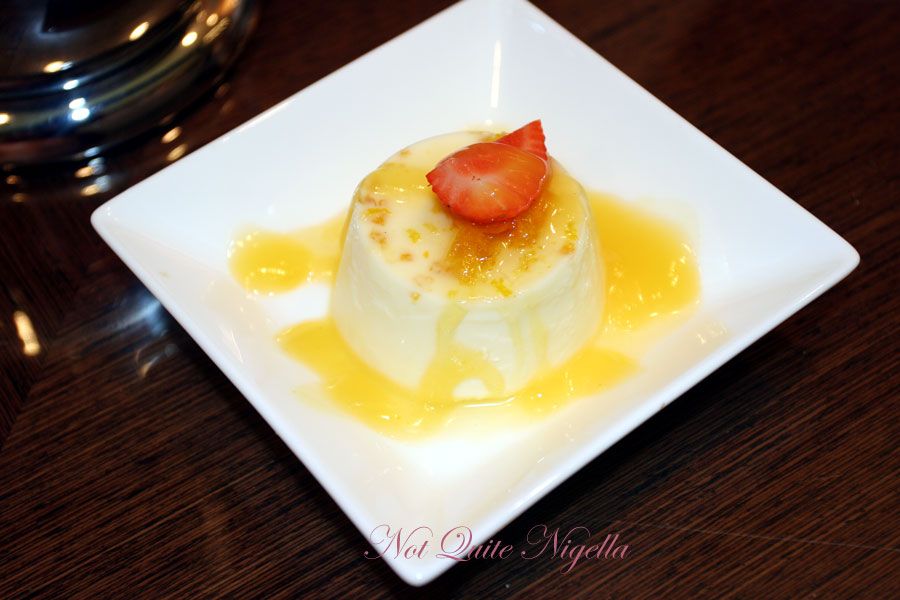 The Mandarin pannacotta is a new addition to the menu and upon tasting it, I only wish I had more stomach room. The creamy soft wobbly pannacotta is delicious with the marmaladey mandarin syrup. I manage to fit in as much as possible without bursting. 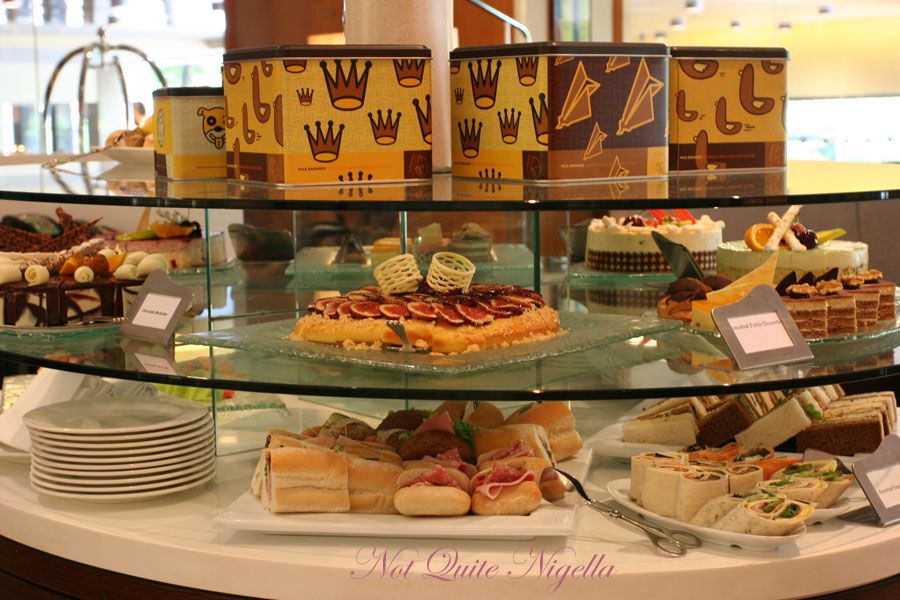 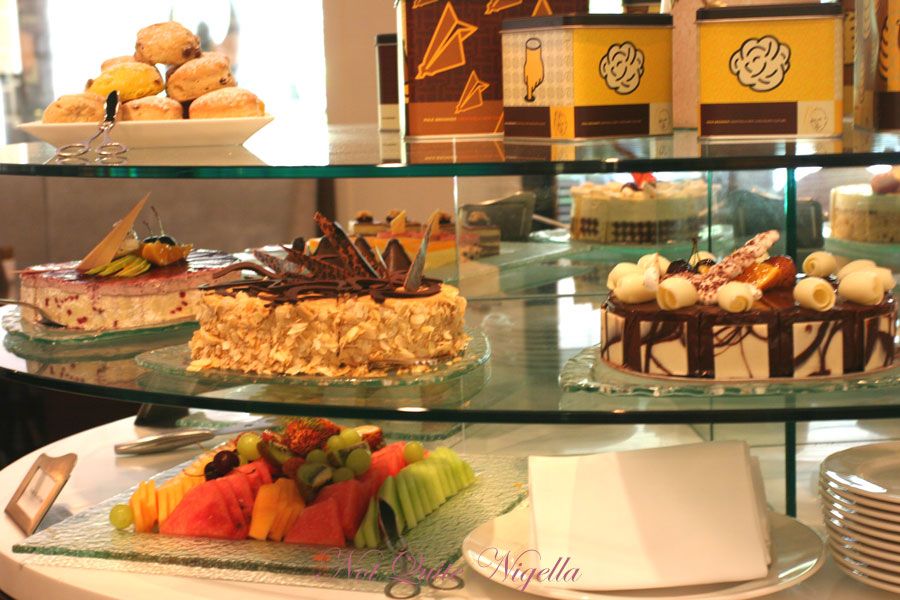 As we're eating and imbibing, the chefs bring out the goodies for the afternoon tea buffet, a fig cake looking particularly luscious alongside moussey french style cakes, wraps and delicate finger sandwiches. We promise that next time, like every time, that we'll order the buffet next.[ 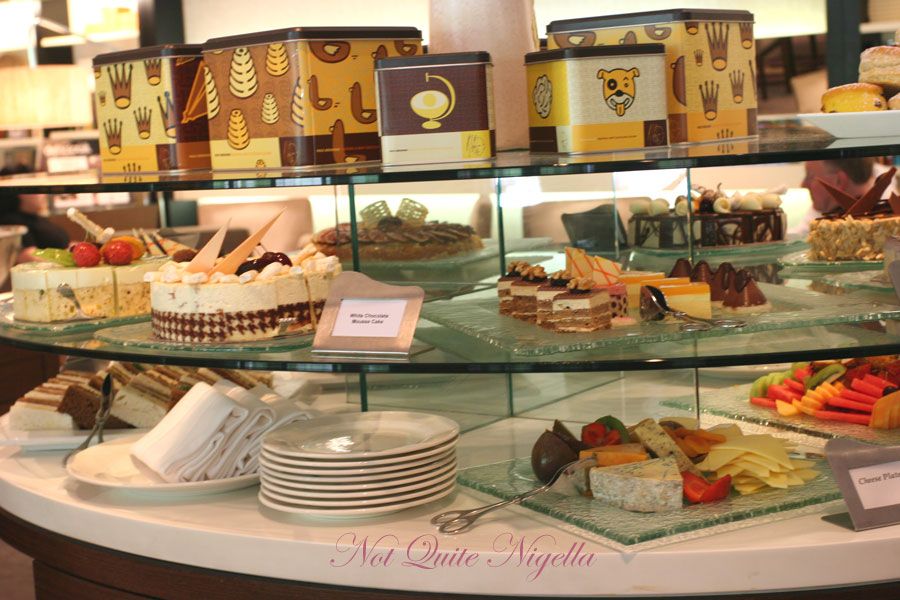 Sheraton on the Park 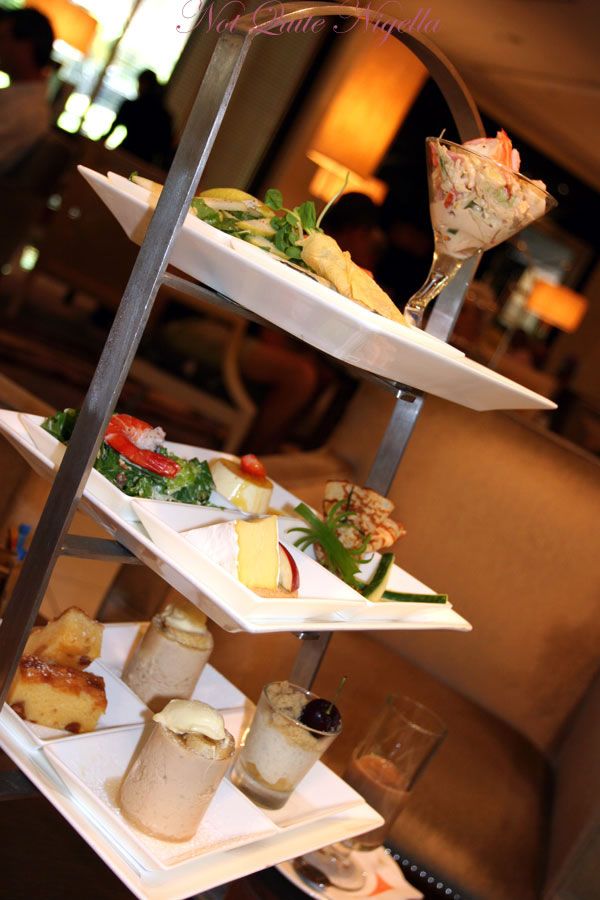