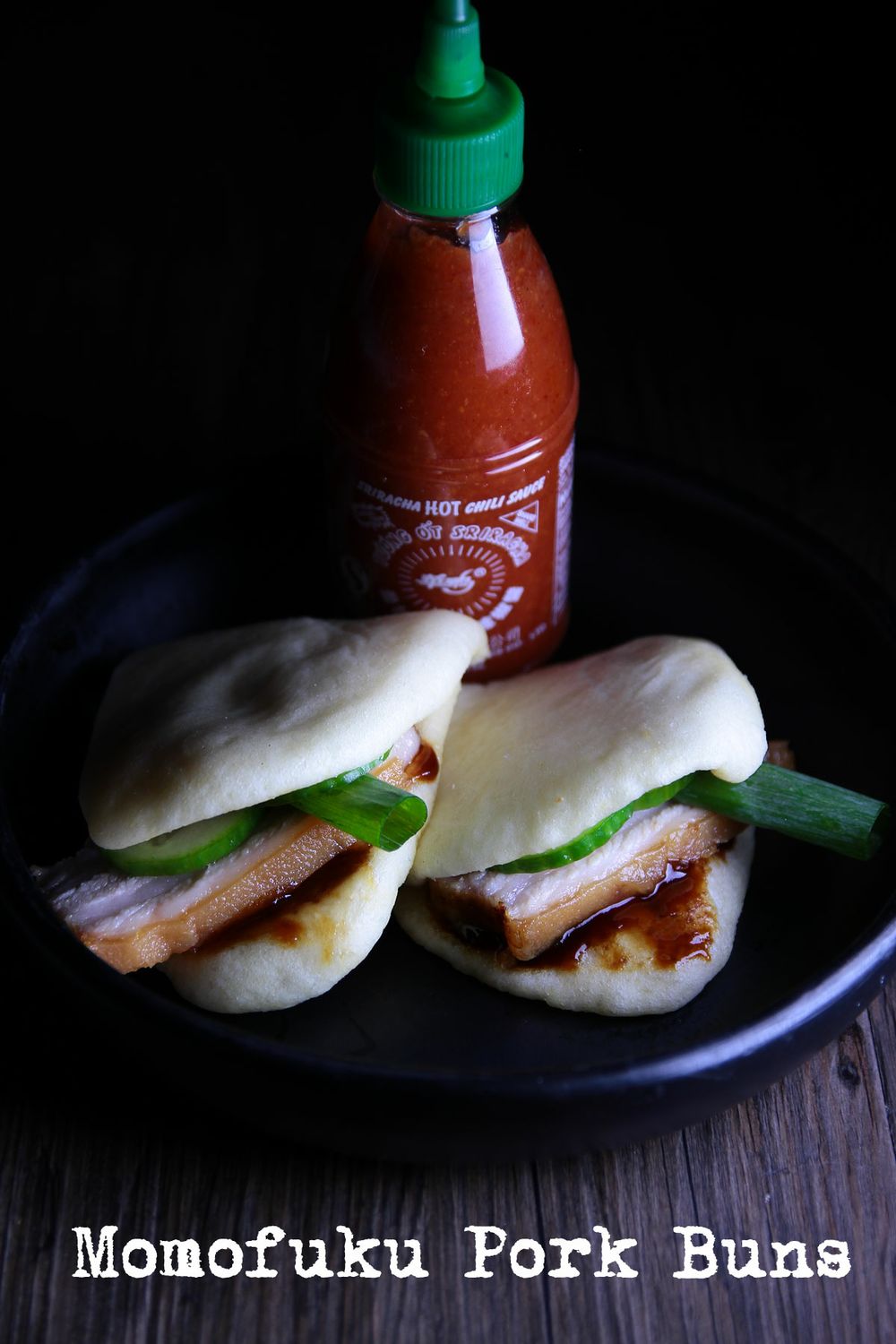 Have you ever had a battle of wills with a stranger? Like when you're sharing an armrest on a plane or in a movie theatre and both of you want the arm rest but neither of you are willing to concede the arm rest? The stranger has no interest in sharing it, nor do they think that it's a rule of one arm rest per person.

Well, that was like the battle I was having with my room neighbour.

I was in a hotel room and it's a lovely one at that. But I was sharing a set of joining doors with my neighbour and all I can gauge that they're a night-owl-late- rising child who loves to watch Nickelodeon until past midnight (I'm picturing Kevin from Home Alone) That's fine, I've got earplugs to help me sleep through the night and I go to bed at midnight with the faint sound of the busy street outside and cartoons. A little later, I'm awoken from my sleep by the turning of knobs and have a slight panic that someone is trying to get into my room.

It turns out that around 1am, my neighbour has discovered the set of doors between our rooms and the fact that you can open the door on your side and then push and jiggle the door on your neighbours (usually they are tightly locked) and my neighbour was trying to push my door roughly open. Panic ensued as I was disoriented and groggy from sleep about where I was and where my door was but thankfully they gave up. 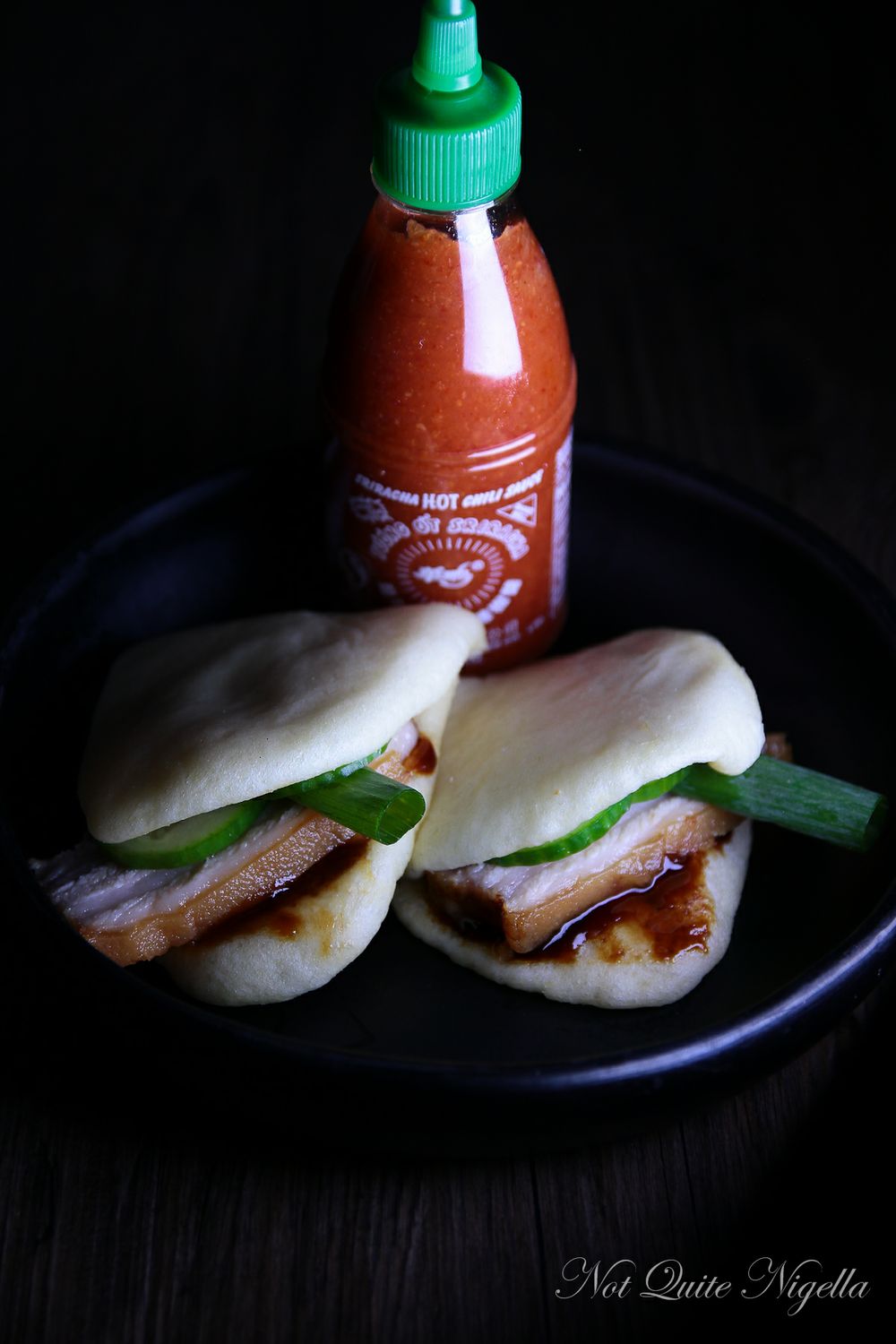 The next morning they are back and the cartoons are on again at full blast. I get ready with my music playing on the iPod dock - not particularly loudly as I figured that there were fairly thin walls and there was no need for the person on the other side of the other wall to hear my slightly dodgy taste in music. However, it was apparently enough to annoy the cartoon loving neighbour who quickly unlocks the door on their end and then lunges at my door repeatedly. Foolishly, I put on a robe and open my side of the door ready to talk to them....

In another case, we had a battle of wills with these pork buns. Not the buns themselves but with some people wanting to ensure that they got one of these buns. Mea Culpa my Dear Reader, I didn't realise that I was only making sixteen of them and from this three went to the photos and the rest went to a family gathering. Not realising how many people would be attending, I felt terrible that I only had thirteen buns to offer people. Some members of the gathering were determined to get at least one or perhaps two. The battle for the buns was on.

These oft copied buns were made famous by Momofuku in New York. Nowadays, many places make their own version of them and these softer-than-soft folded over buns can be filled with all manner of delicious fillings from pork belly, crispy skinned duck to luscious lamb. The process for the buns isn't that hard for those that bake bread from scratch and the only real difference is in the steaming of the buns rather than baking. Given that Mr NQN was at home during the holiday break I thought it might be a fun task to do during the day. 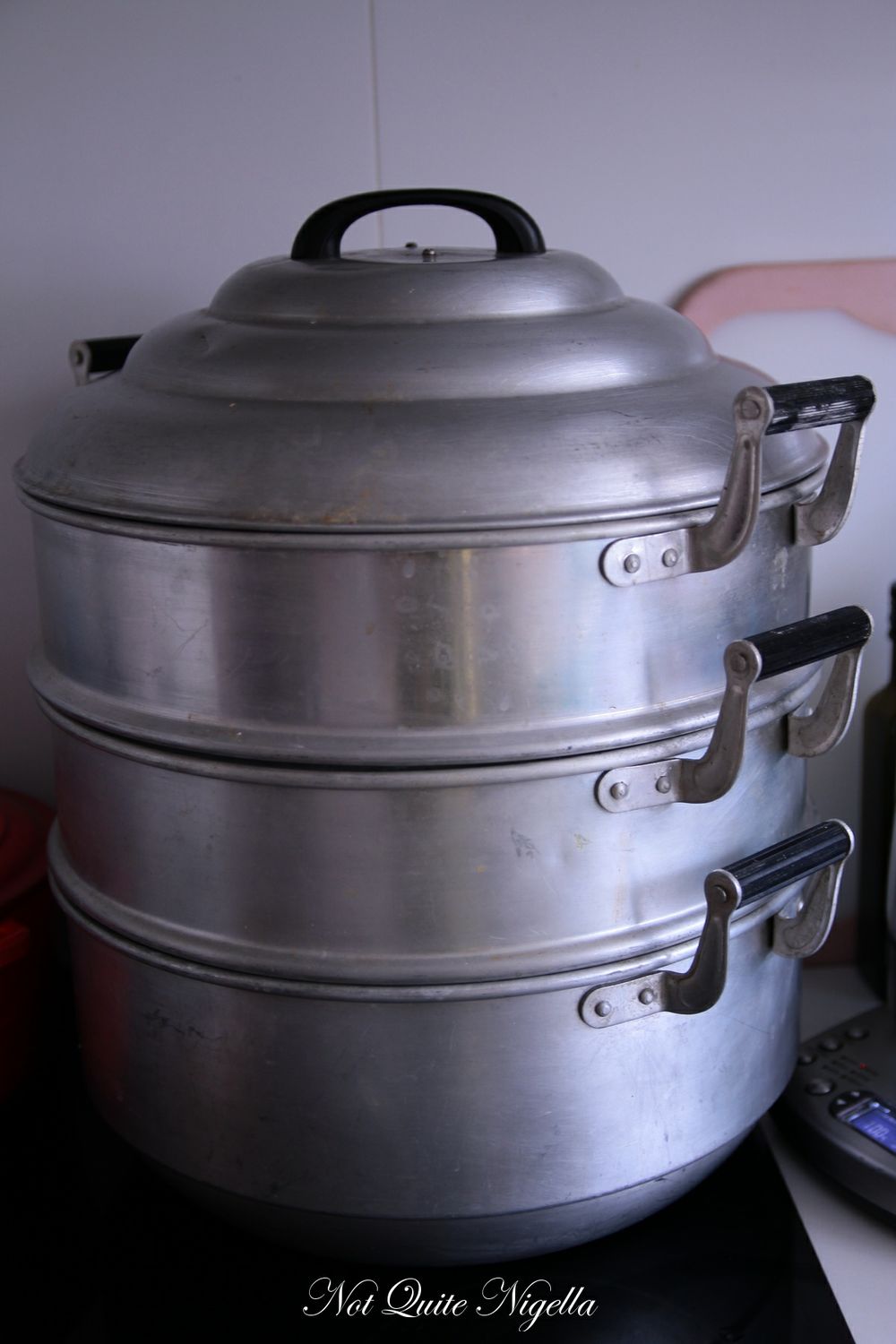 The only part that is do ahead of time is the pork belly. I like the skin to be super crispy so I dry brine the belly for at least 12 hours beforehand. I much prefer dry brining to wet brining for a few reasons. It is easier - all it involves is salting the meat and leaving it while wet brining requires more fridge space as you need to cover the meat with brine and it also can change the consistency of the meat as you are adding a lot more moisture to it.

After dry brining, the pork belly was simply slow roasted in a chicken stock and sliced thinly so that the crunchy, skin and meltingly tender fat was wedged between the buns. A lick of hoi sin sauce, sriracha chilli sauce and discs of cucumber and green onion and you had something worth fighting over. Or at in engaging in a battle of wills over.

Oh and my hotel neighbours? Thankfully, by the time I opened the door, they were gone. I only realised afterwards how silly I had been opening the door as I didn't know a thing about them except that they had no idea of privacy boundaries. It turned out that the two neighbours were two women, I have no idea what age or anything else about them but I knew that a) they love cartoons and b) they think that locked doors are meant to be opened!

So tell me Dear Reader, would you have answered the door? And have you ever tried buns like these and if so, what is your favourite filling for them?

And before I forget...I hope everyone has a wonderful New Year's Eve! I am hosting a NYE party with a friend and cooking up a storm which I will share with you soon. I hope that 2013 is a wonderful year for everyone and that you have a splendid New Year's Eve celebration! Here's to a fun and food filled 2013! 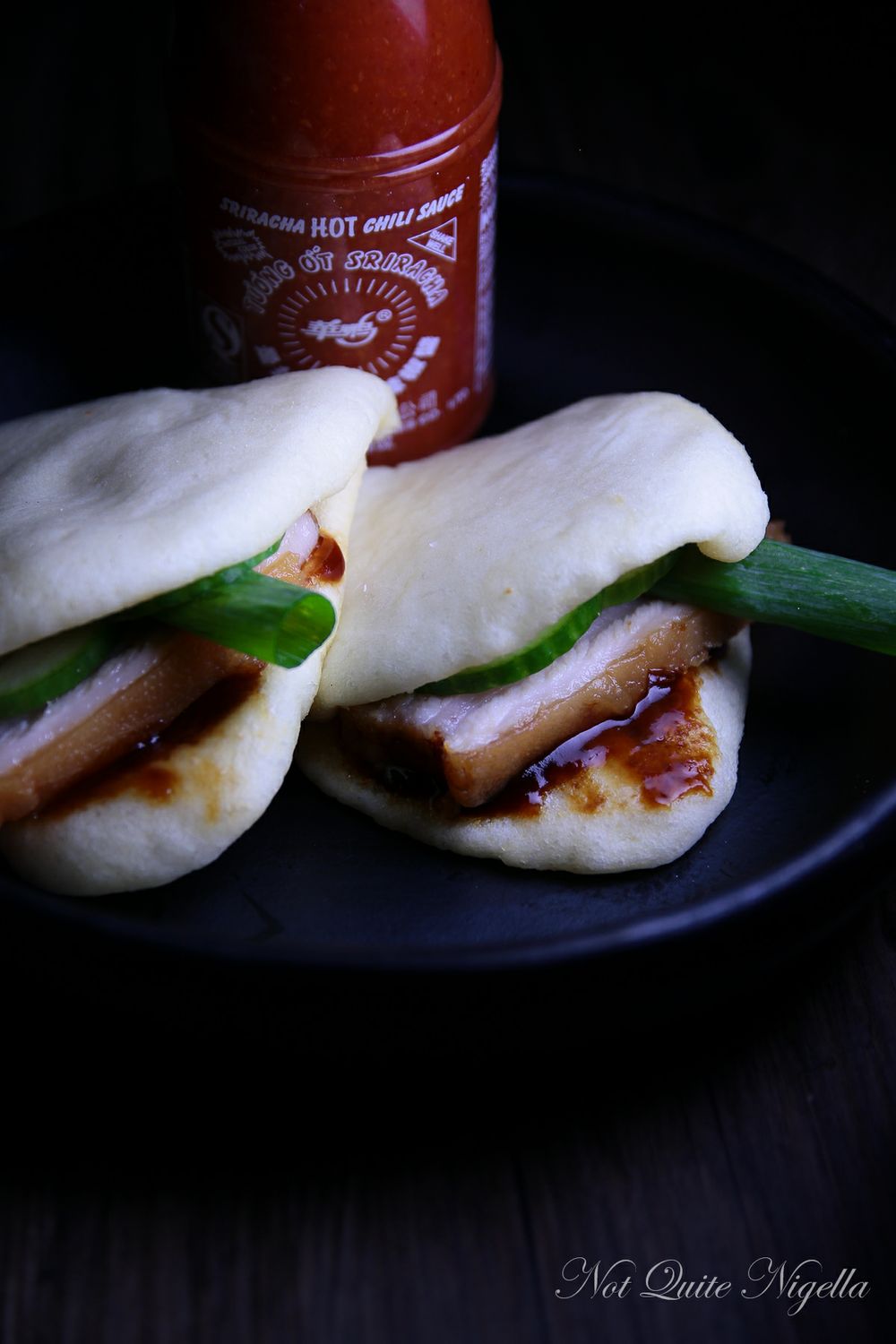 Adapted from a recipe on Epicurious by David Chang

To make 1 cup of cake flour, add 2 tablespoons of cornflour or cornstarch and fill to 1 cup mark with plain or all purpose flour. You can buy small packets of seasoned dried nori seaweed sheets at Asian grocery stores. They are usually in the snack aisle or you can cut up the bigger sheets of nori that you use to wrap sushi rolls. 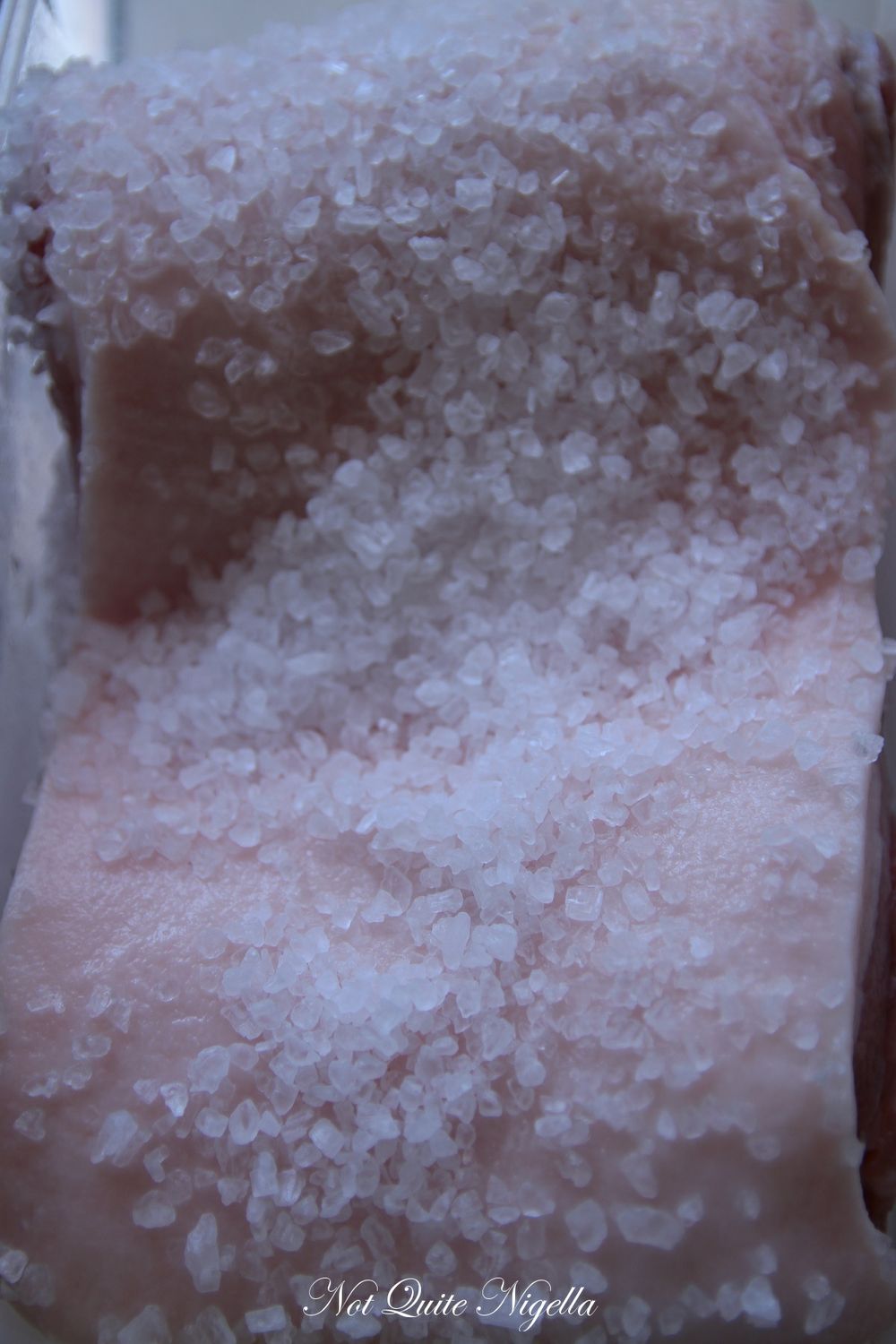 Step 1 - Wash and pat the pork dry on the skin. Dry brine the pork by sprinkling salt all over the skin of the pork and allow to brine for at least 12 hours (up to 48 hours). I like to dry out the skin as much as possible so I cover the area underneath the skin and then allow the skin to dry out in the fridge. 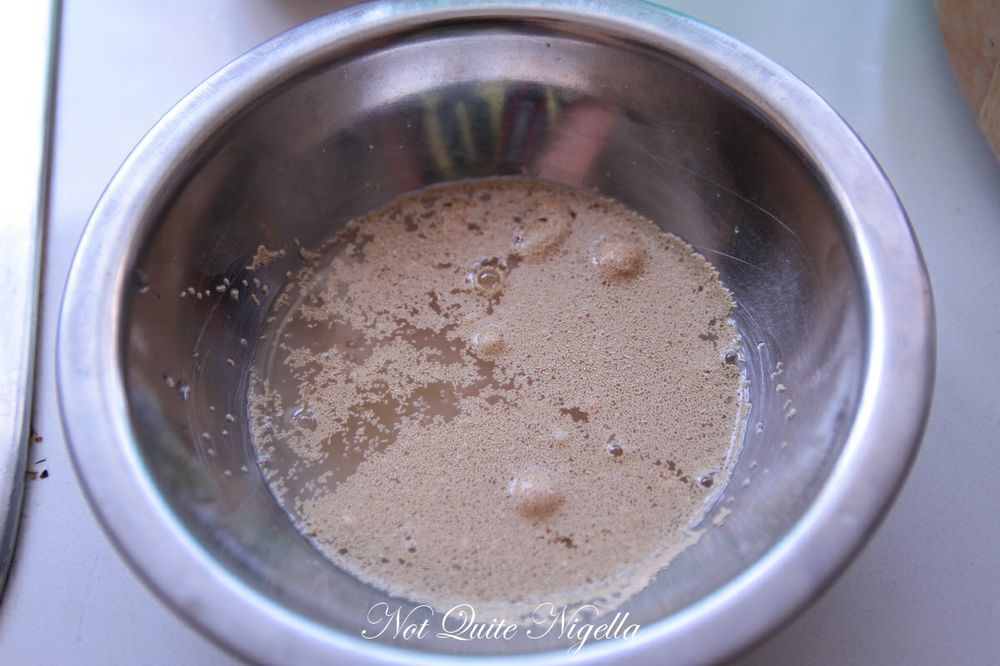 The yeast when it starts to foam 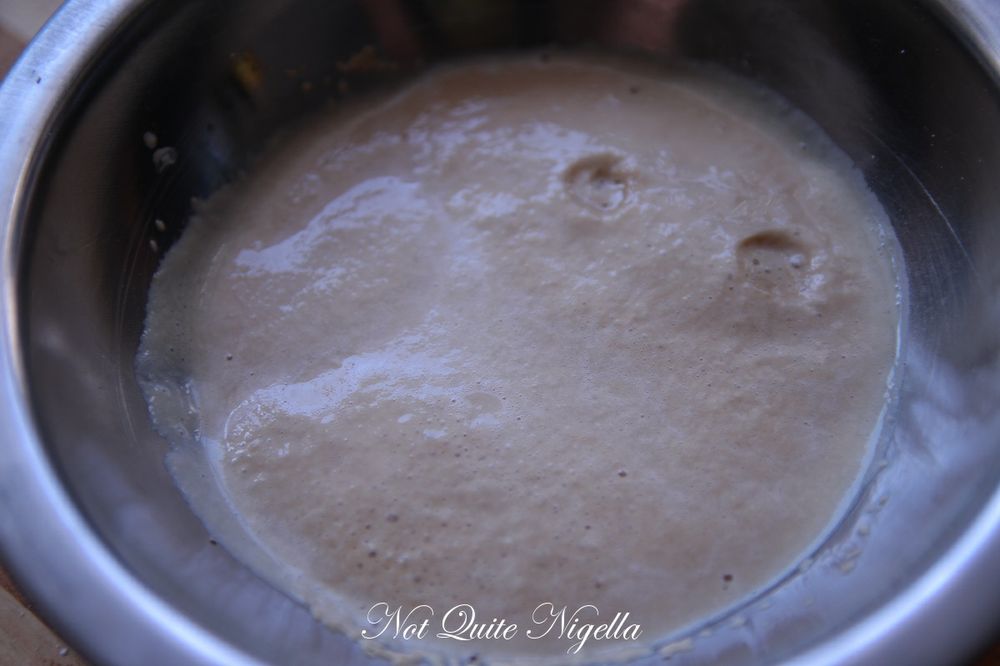 To when it has finished foaming

Step 2 - Start on the dough. In a small bowl add the pinch of sugar with 1/4 of the cup of warm water and the yeast. Allow to become foamy. In a bowl of an electric mixer fitted with a dough hook, place the sugar, milk powder and cake flour and add the yeast mixture and remaining water (do not add the baking powder). Knead for about 5 minutes until elastic and shape into a ball. Place in an oiled bowl and turn to oil the dough ball all over. Cover and allow to rise for 2 hours or until doubled (I hurry this along by placing the bowl in a bowl of hot water to make this rise faster-change the water once or twice as it will get cold). 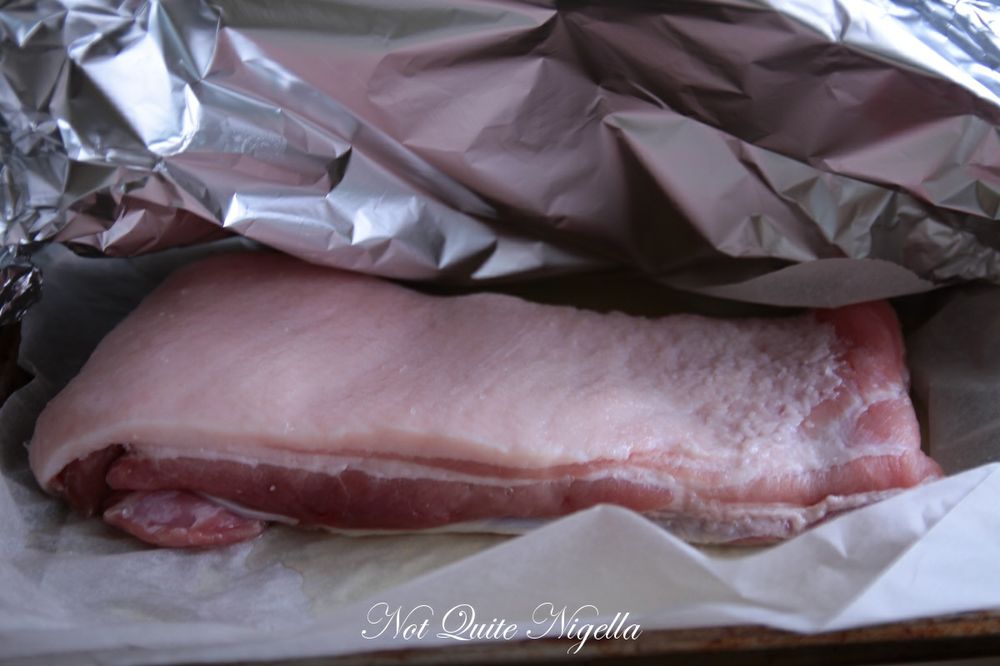 Step 3 - While the dough is rising,bake the pork belly. Brush off the salt well and preheat oven to 150c/300F. Place the pork belly skin side up in a deep baking dish and pour the stock around it making sure not to wet the skin on top. Cover tightly with foil and roast for 2.5 hours. Then turn oven up to 235c/450F, remove the foil and roast for 20 minutes. Cool for 30 minutes and then slice into 16 portions. 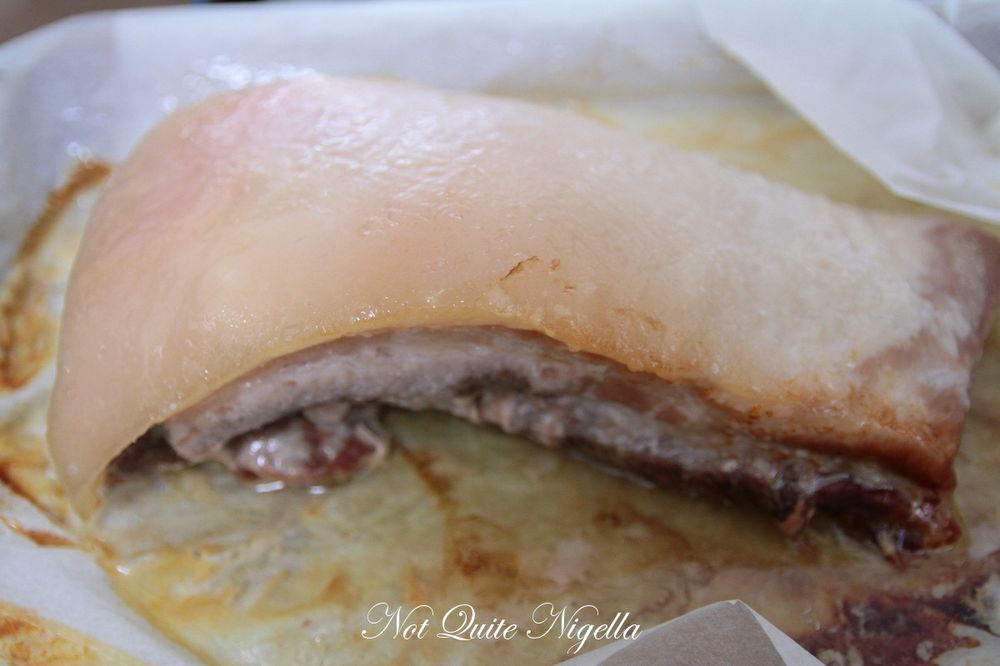 After 2.5 hours baking, before having the final blast to crisp the skin 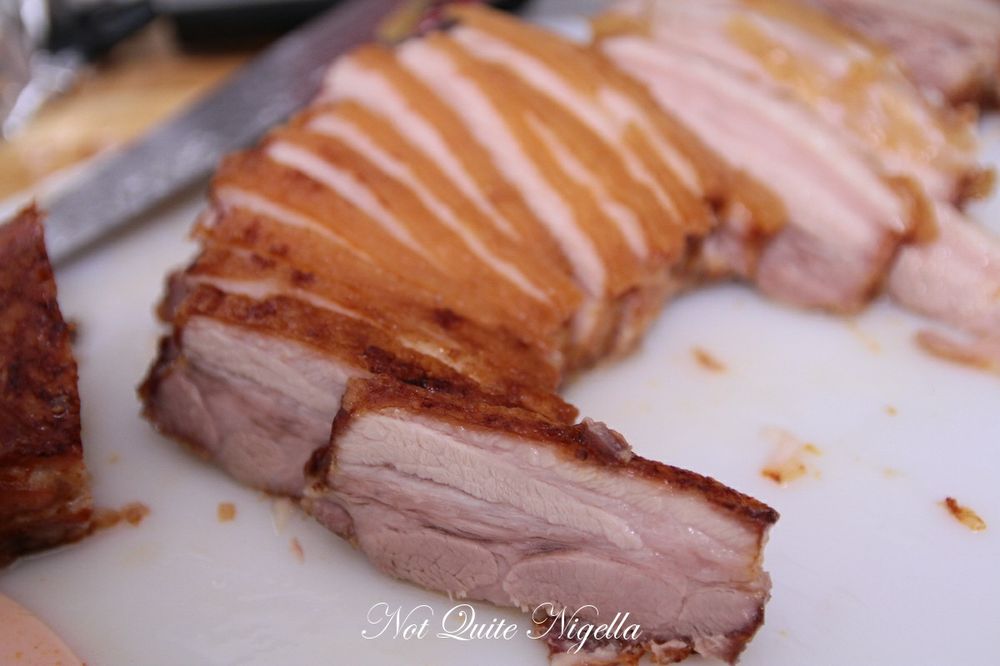 Step 4 - Back to the dough! Punch down the dough and flatten into a round. Sprinkle with baking powder and bring edges up. Knead again for 1-2 minutes until incorporated. Place back in the bowl and cover again and allow to rise for 30 minutes.

Step 5 - Have a steamer ready or you can also use a wok with a steamer insert at the bottom or those bamboo steamers. Cut out some squares of baking paper (about 3x3 inch or 7.5x7.5cms). When the dough has risen again, punch down and shape into a 16 inch long log. With a dough cutter or a knife, cut into 16 even pieces. 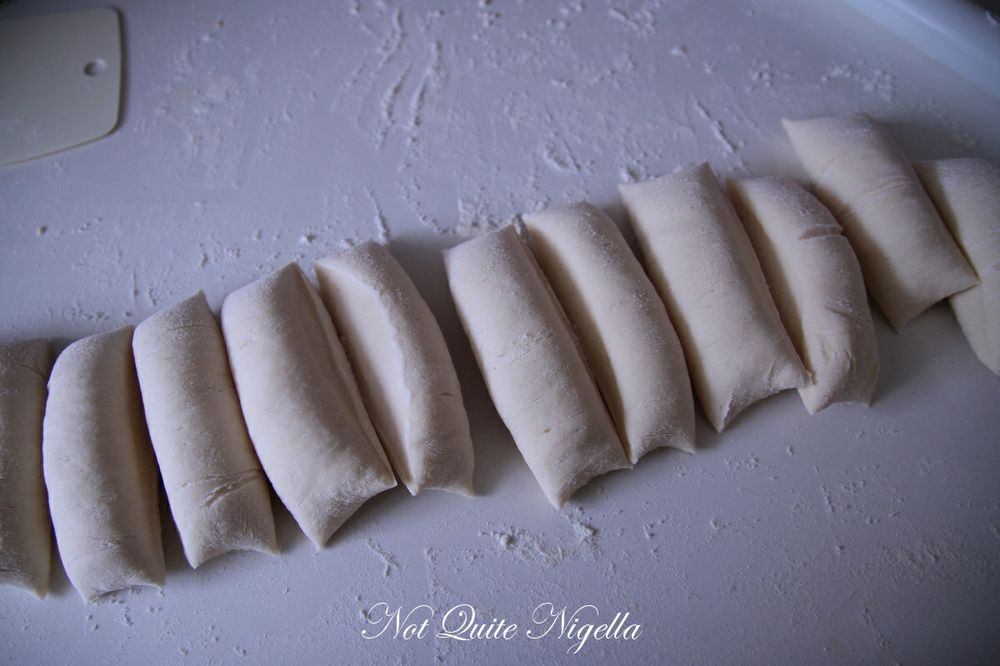 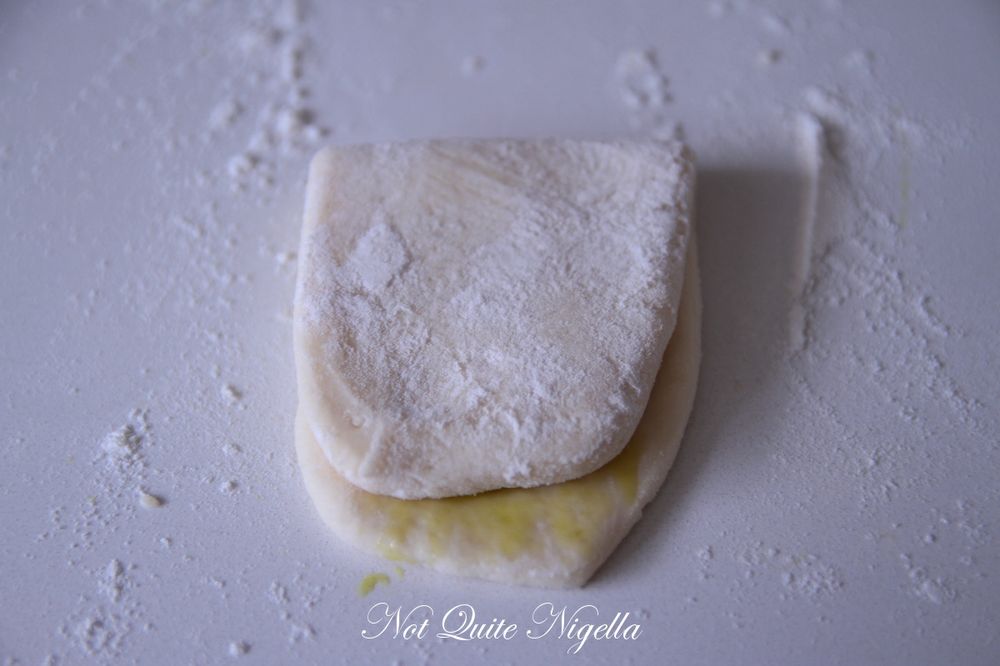 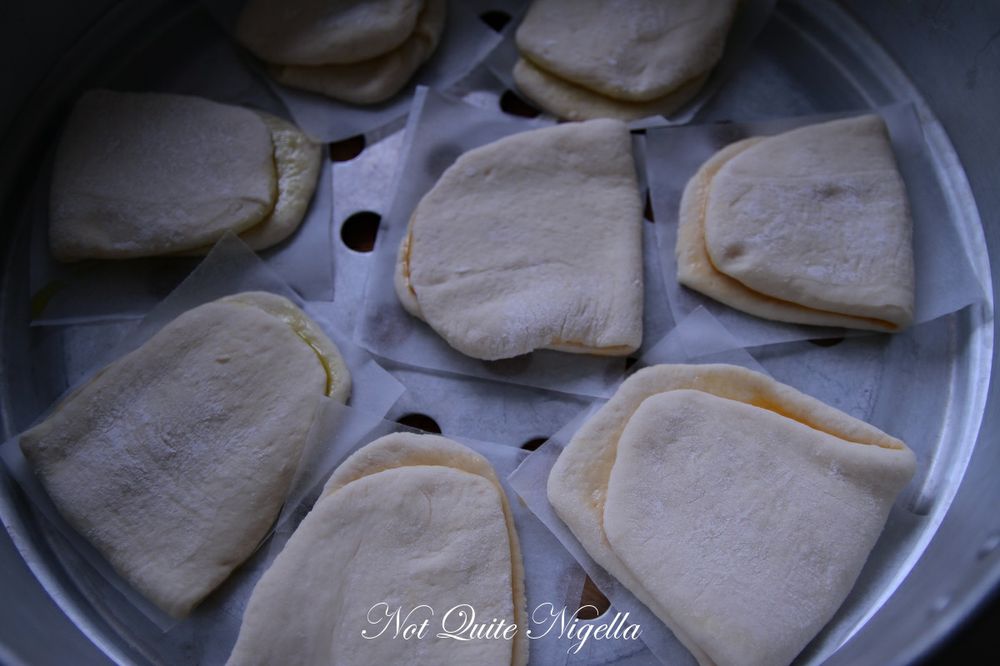 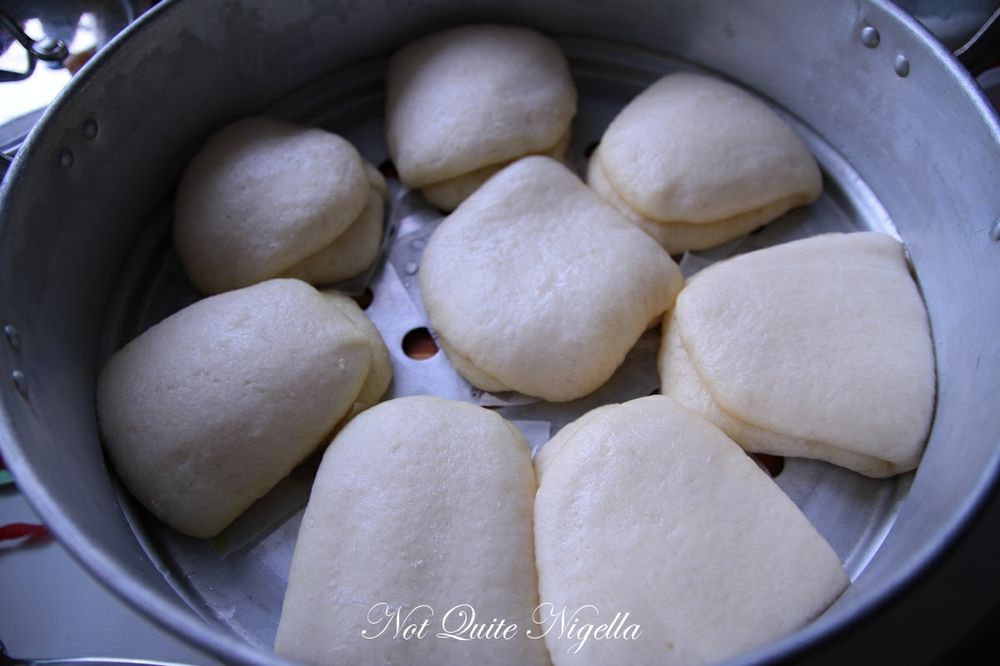 Step 7 - To assemble (and these are best served warm), open up the flap and brush the bottom with hoi sin sauce. Place the nori sheet on top of the sauce and then place the pork belly. Cut cucumber into discs and add this along with a piece of green spring onion. Add sriracha to taste or let people add as much as they like.