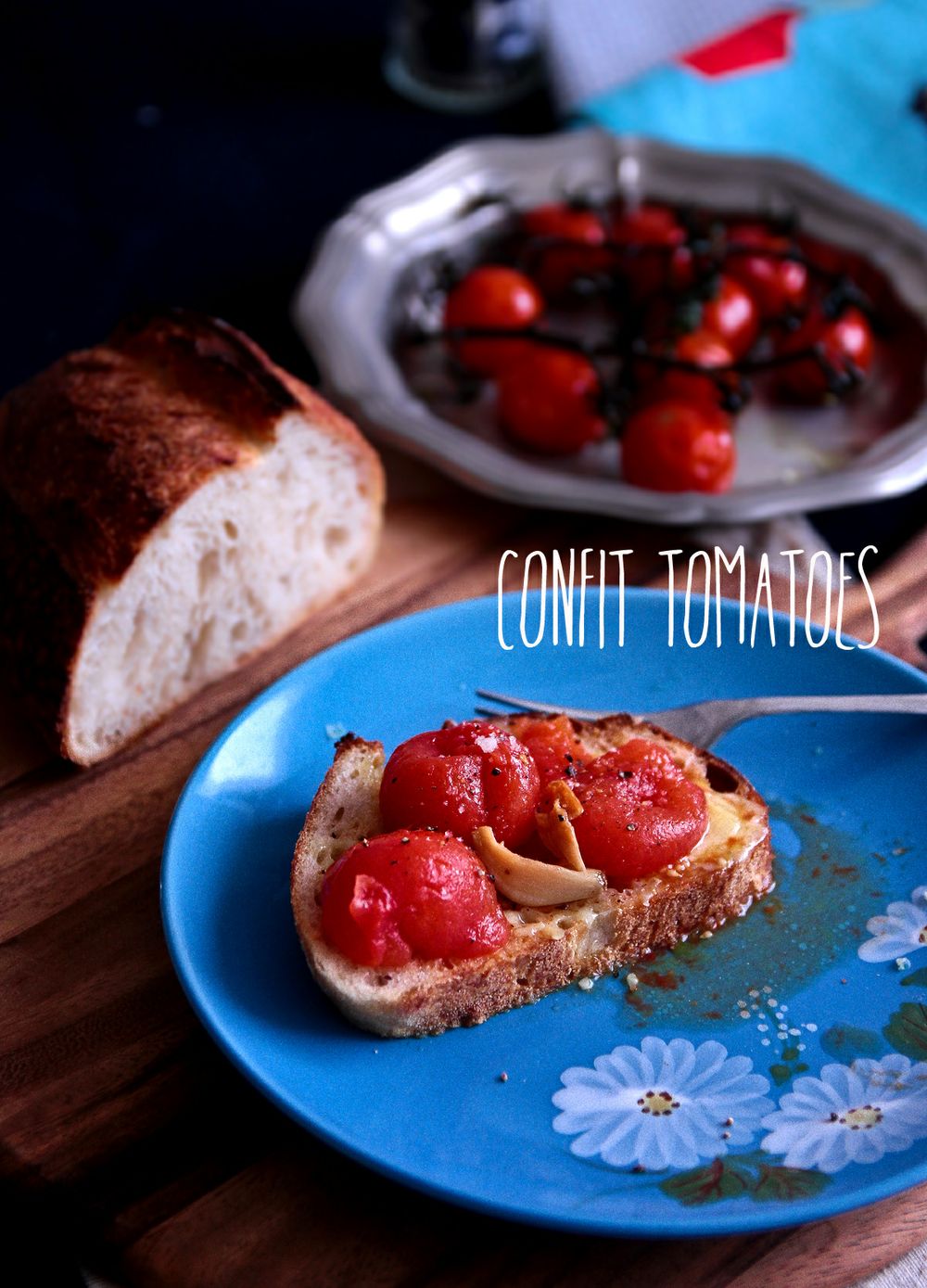 Dear Reader, I've been going a bit crazy lately. Buoyed by the fabulous summer fruit and vegetables on offer I've been busy preserving (and eating) as much of it as possible. Two of my favourite summer items are tomatoes and garlic and the ones that I've been eating lately have been sweet sun kissed specimens.

Then one day I saw a post on  Glamorous Glutton where she made a tomato confit and I thought that this would be a fabulous way to preserve the summer's harvest. Confit is usually submerging and cooking an item in oil at low temperatures that also gives flavour. Salmon is a popular confited item but other things can also be cooked this way including tomatoes and garlic. GG's clever method is similar to the Moonblush Tomatoes where you split tomatoes and drizzle them in oil and pop them in a preheated but inactive oven overnight. 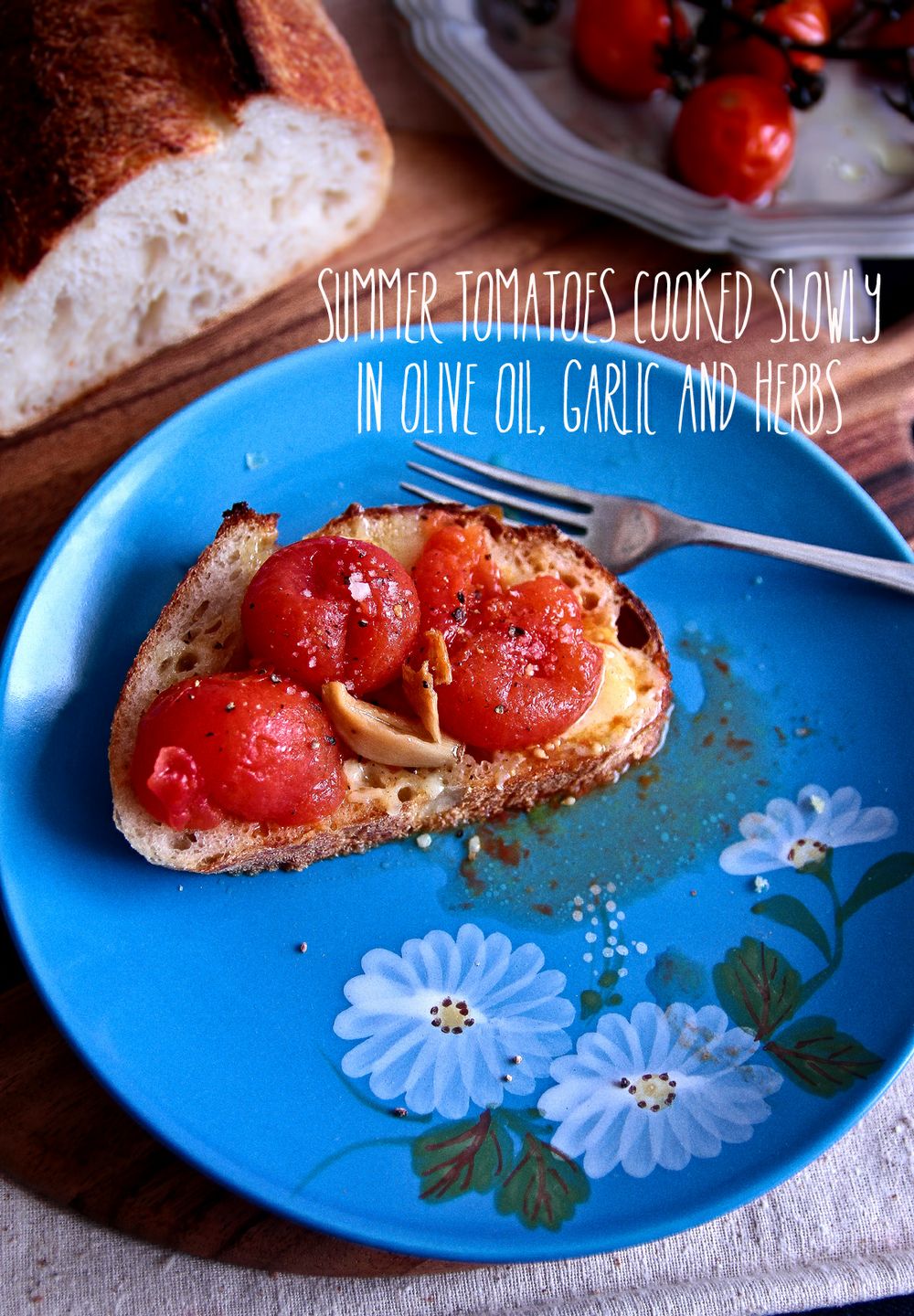 I thought I'd do half of these like those but the other half as a traditional confit, submerged in good olive oil flavoured with garlic and herbs. I left the oven to go while I ran errands and came back to a garlicky, tomato smell. Carefully I took out the tomatoes and the skins were wrinkled and they were bursting with flavour and juice. I sliced a piece of chewy sourdough bread, placed it under the grill with some of my favourite cheese and popped three fat confit cherry tomatoes on top. A dash of salt and pepper for taste and realised that I could extend my summer to go for months on end. A sunny, cheery thought indeed!

So tell me Dear Reader, what is your favourite season for food? Spring because all the new fresh produce, summer for the glut of sweet fruit, autumn for chestnuts and mushrooms or winter for warming soups and stews? 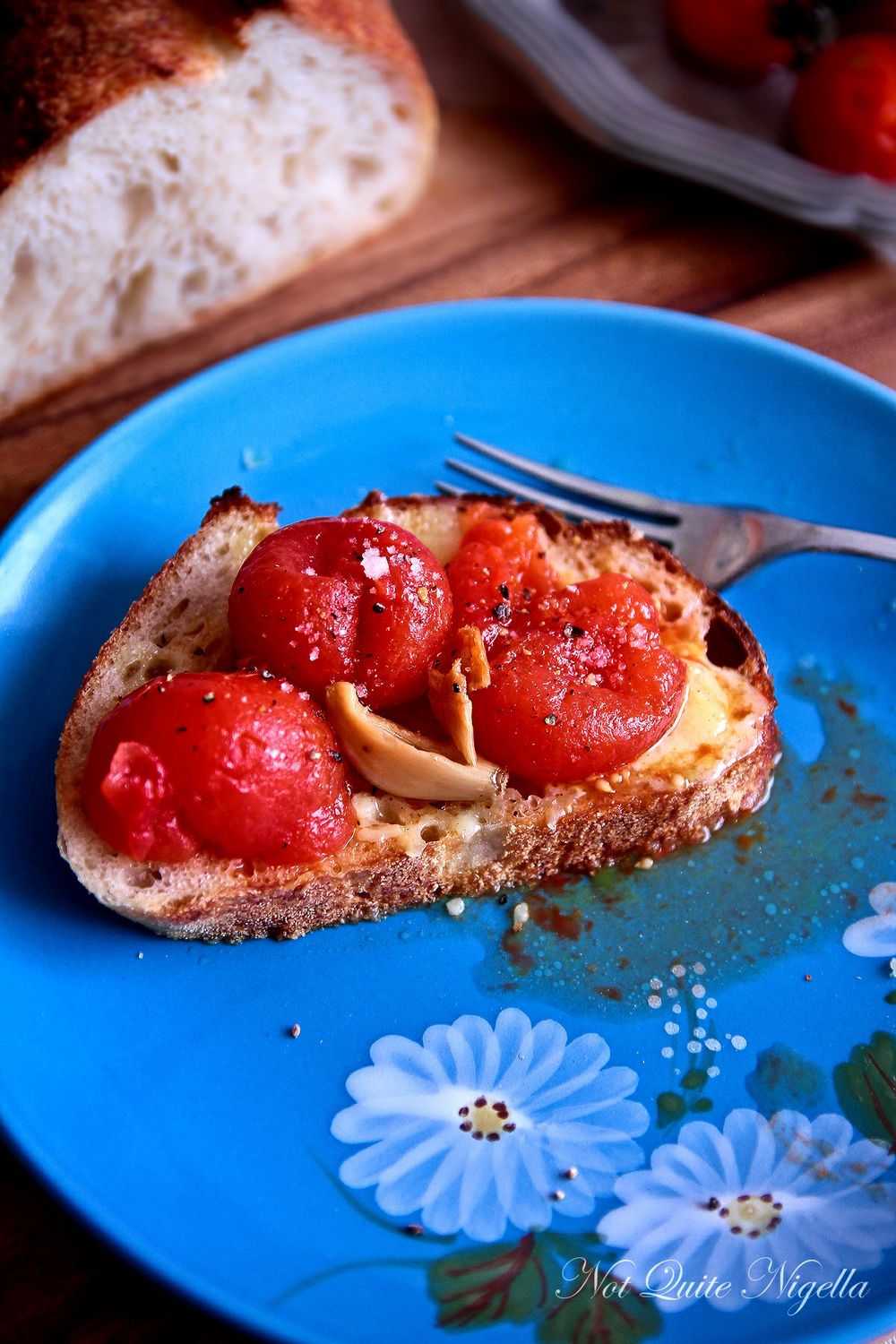 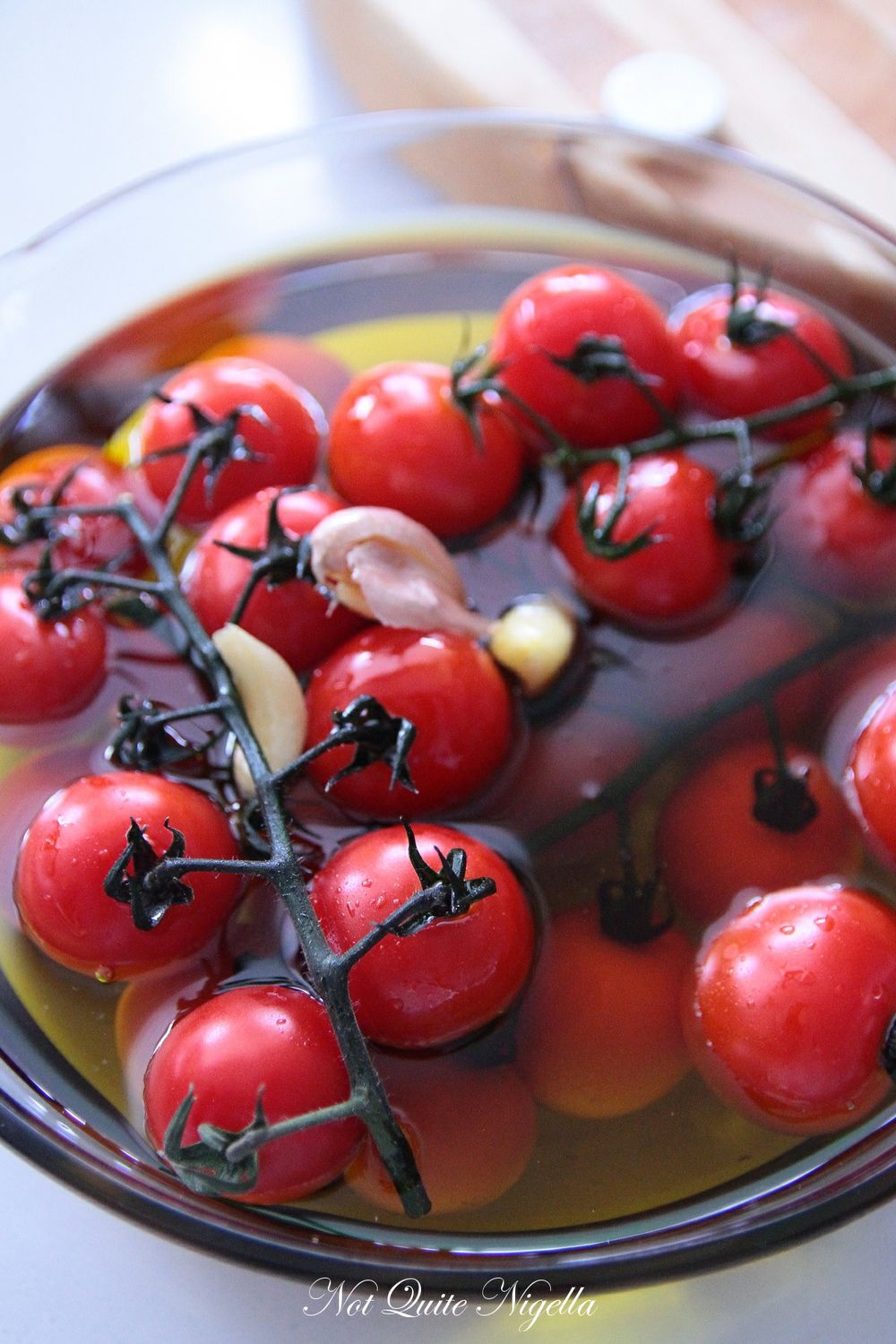 Step 1 - Preheat oven to 121c/250F. Wash and dry tomatoes and place in a baking dish along with the garlic and herbs. Season well with salt and pepper. Cover with oil and bake uncovered in the oven for thirty minutes, then turn the oven down to 100C/212F and bake for two and a half more hours. Once the skins are wrinkled, they are ready.  Be careful removing this from the oven as the oil is hot. Allow to cool, remove the garlic and refrigerate in jars in the oil.

Step 2 - Refrigerate in the oil and store in a jar in the fridge. 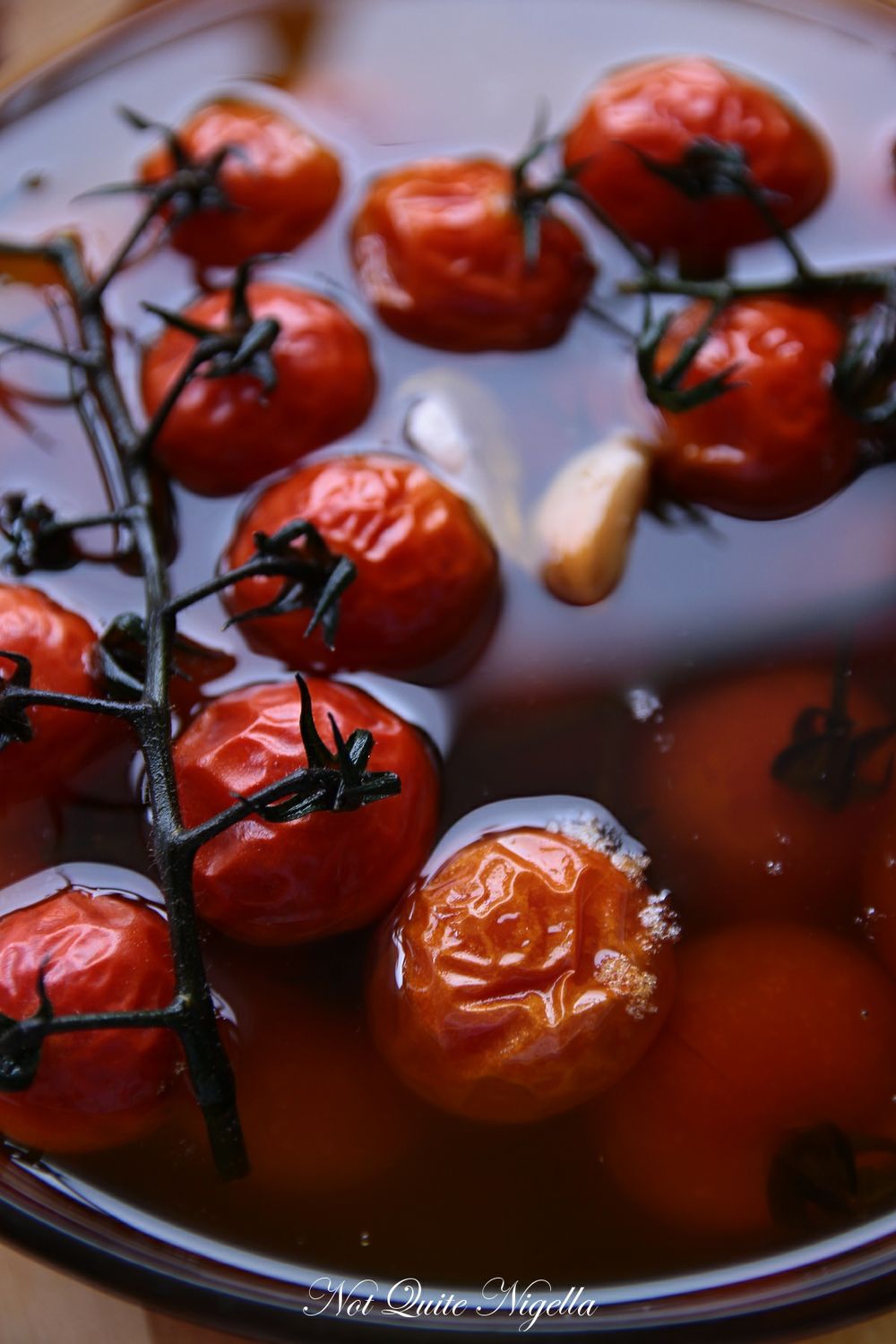 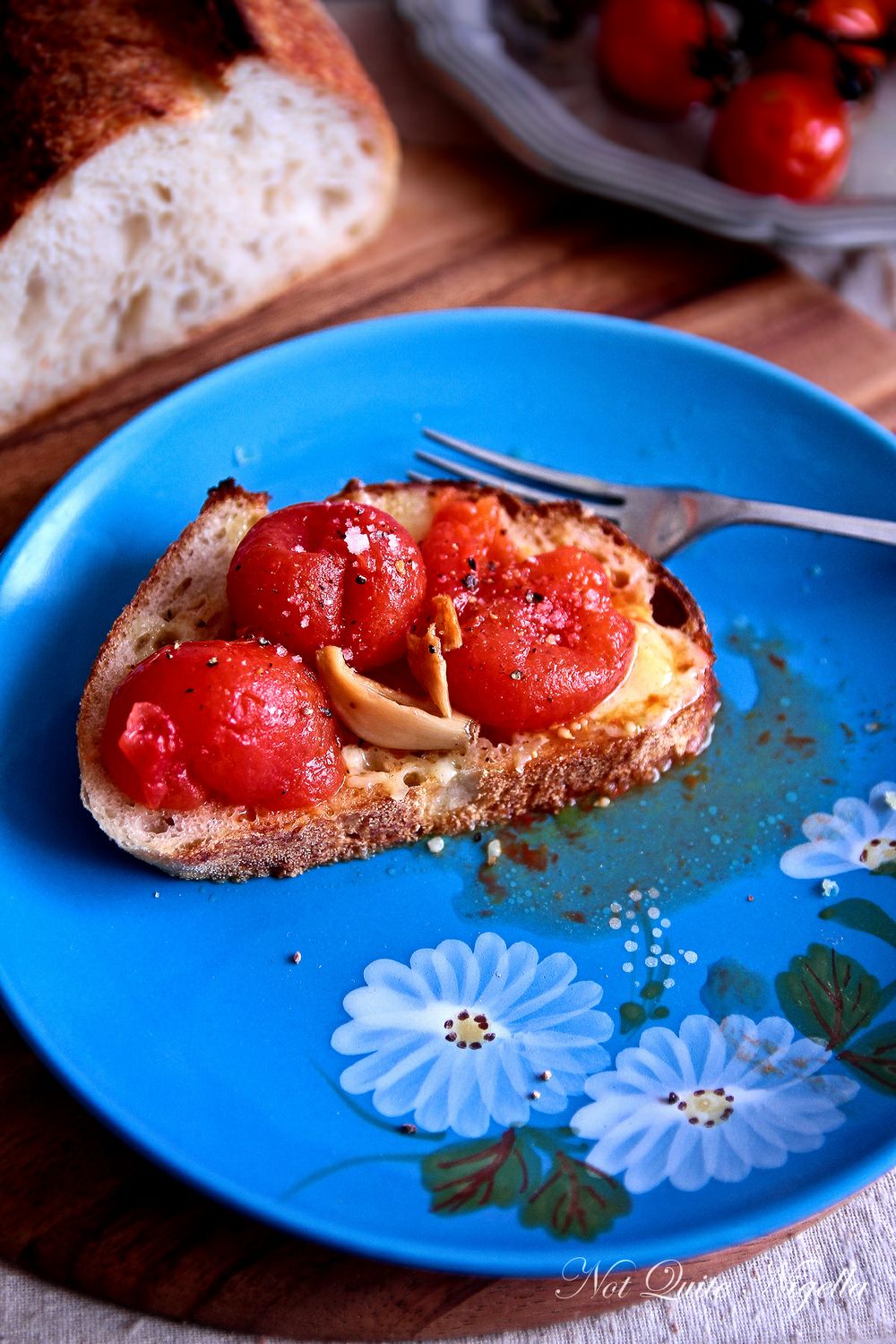