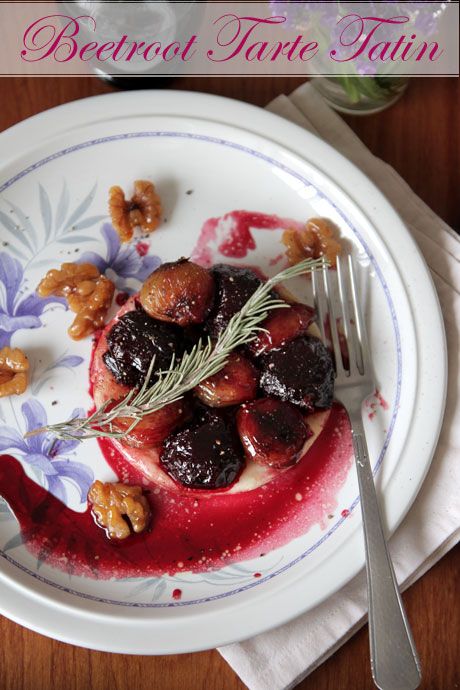 We were talking about Golden Books the other day. I got to reminiscing about my favourite ones and I recall my very favourite ever Golden Book was one called Elephant on Wheels. It was about an elephant who loved to roller skate. I loved it because I was forever being told not to do something by my parents. I have always hated being told what to do and so did this elephant Petunia. So she hid her roller skates in clever little places like in the garden as a bunch of flowers, the shower curtain rail and anywhere else that she could find. I admired how ingenious she was.

Rebelliousness aside - and that's a bigger story, I loved her cunning. It's a similar cunning and adoration for pastry that has me seeking out even more ways to eat pastry.  I'm sure you're all familiar with the apple tarte tatin. I'm a little too familiar with it if you know what I mean. Give me an pastry dessert and I turn into a dessert seeking missile. But tarte tatin can also be done as a savoury dish. 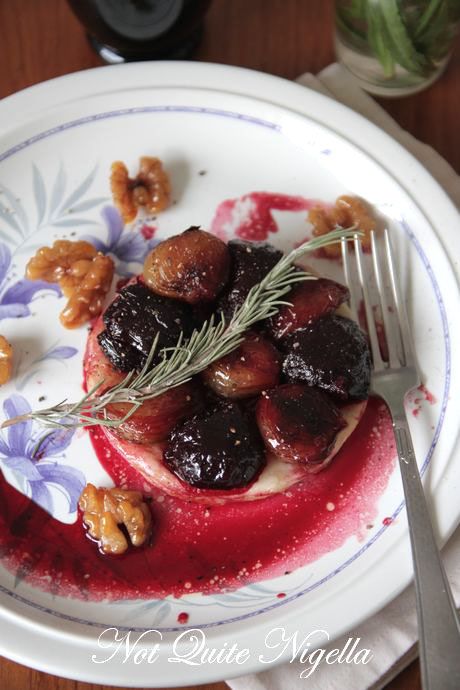 I found this recipe in the new Serge Dansereau cookbook "French Kitchen" where he cooks food that is made for home cooking ($59.95 by Harper Collins and look out for a giveaway soon ;) ). Isn't it funny how quickly time passes. When we went to his Bathers Pavilion SIFF event last year he was talking about writing the book and now a year later here it is. Everyone discussed how much people wanted to do home cooking ever since Masterchef hit our shores (and now the kid version is here-how scarily good are these kids?). 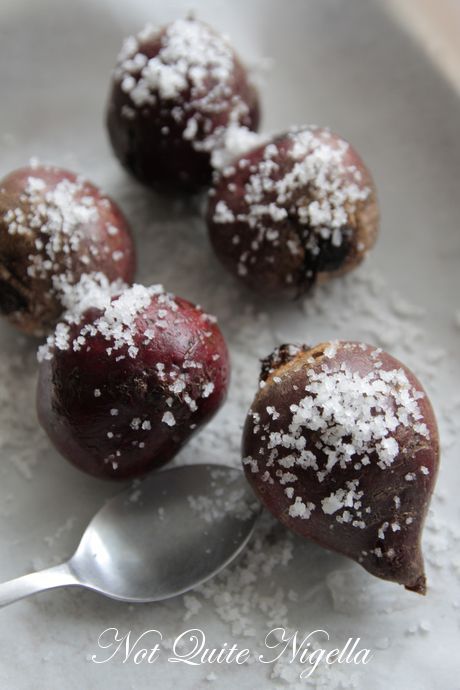 I didn't follow the recipe exactly. I had to ditch the caramel recipe which just called for brown sugar to be melted in a pan without any water but this crystallised on me and became a hideous mess so I used a reliable toffee recipe. I also thought that the temperature to bake the pastry given was too low as they specified 180c/350F. It remained pale until I turned it up to 200c/400F and it then became golden on top. The pastry was crunchy, the beetroot soft and yielding and the caramelised eschallots gave it a further sweetness. Still, it's possibly good that I don't get too carried away seeking out new ways to eat pastry. You may end up seeing a new Golden Book about me called "Elephant Eats Pastry" :P

So tell me Dear Reader, were/are you rebellious? 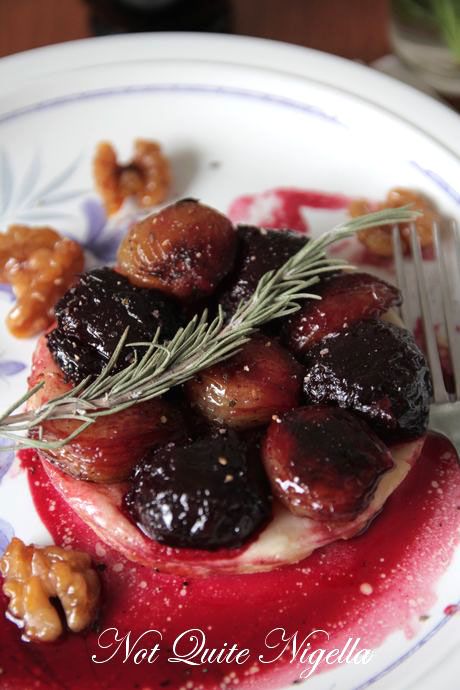 Serves two along with a salad 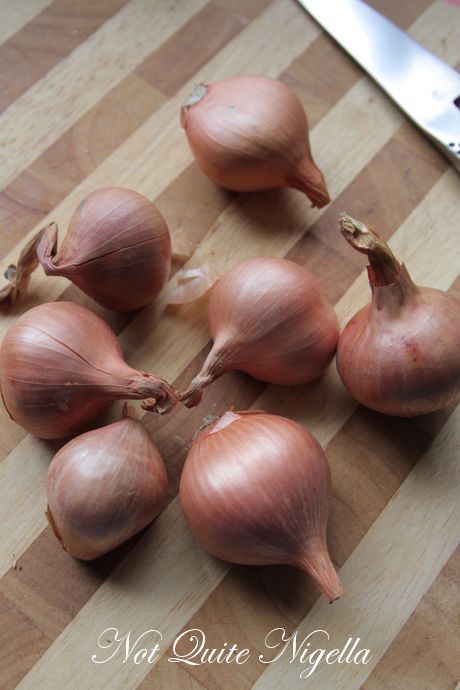 Step 1 - Preheat oven to 180c/350F. Wash and scrub beetroot and then place on a lined baking sheet. Sprinkle over with the salt and bake for 90 minutes until a knife can be easily inserted. Remove from oven and cool. Using disposable gloves, peel the skin off with your fingers or with a paring knife. Cut in half.

Step 2 - Meanwhile while the beetroot is baking, prepare the eschallots. Melt half of the butter (30 grams or 1 oz) in a medium saucepan with a lid. Gently cook the eschallots for about five minutes. Then add 2 tablespoons of water (have the lid ready to place over it) and then cover with the lid and cook gently for 10 minutes. Remove from heat and set aside. 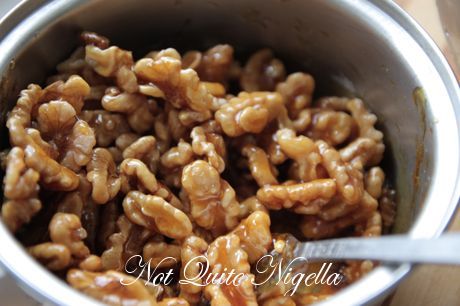 Step 3 - Make the candied walnuts. Line a baking sheet with baking paper. In a small saucepan, dissolve the sugar into the water ensuring to brush down the sides of the saucepan with a wet pastry brush to catch any single sugar crystals. Once all of the sugar has been dissolved, turn heat up to medium high and wait until it starts to turn a caramel colour. Do not walk away or get distracted while this is taking place. Once it has turned partially caramel, remove it from the heat and stir in the walnut pieces. The caramel will continue to cook. Then place onto lined baking sheet to set. 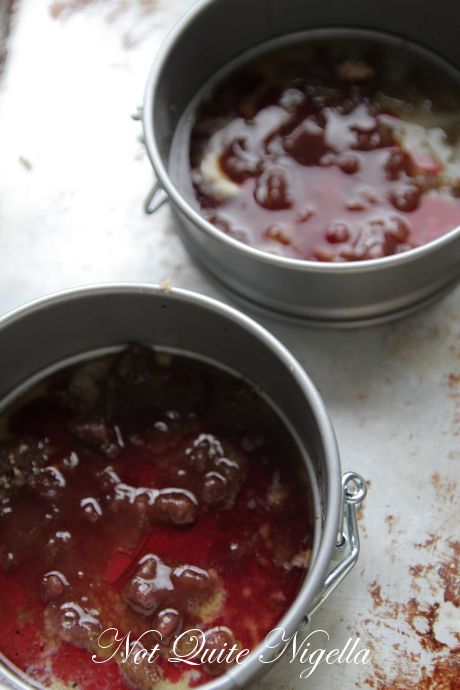 Raspberry vinegar, brown sugar and butter in the base of the tin

Step 4 - When all of the components are ready, preheat the oven to 200c/400F. Place the baking tins in the oven to preheat. Using the base of the tins, trace four circles in the puff pastry and double up the discs so that there are two discs of puff pastry each with two layers. Dock each disc lightly with a fork. 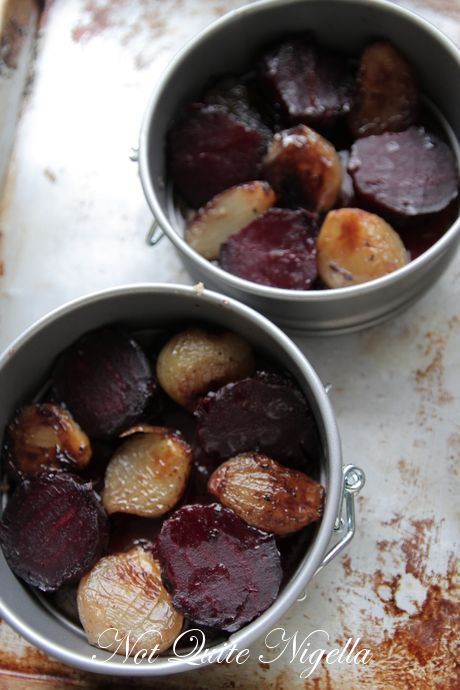 Placing the beetroot and eschallots

Step 5 - Assemble the tarte tatin. Divide the butter in half and remove the tins from the oven and place the butter in each tin-the tins are hot so the butter will melt. Then add 2 teaspoons of light brown sugar in each tin and a tablespoon of red wine vinegar or raspberry vinegar in each. Place the beetroot halves and eschallots in an alternating pattern. Place the puff pastry discs on top and then place into the oven to bake for 20 minutes until the puff pastry is golden. 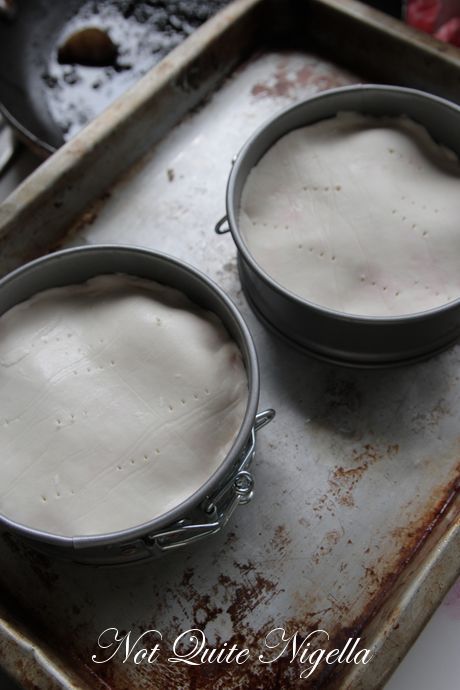 Step 6 - To serve, invert onto a plate where the pastry will end  up on the base. Serve with a salad and the candied walnuts. 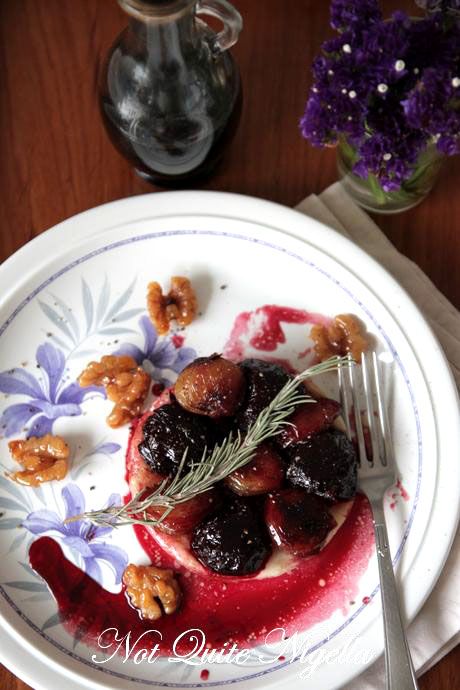