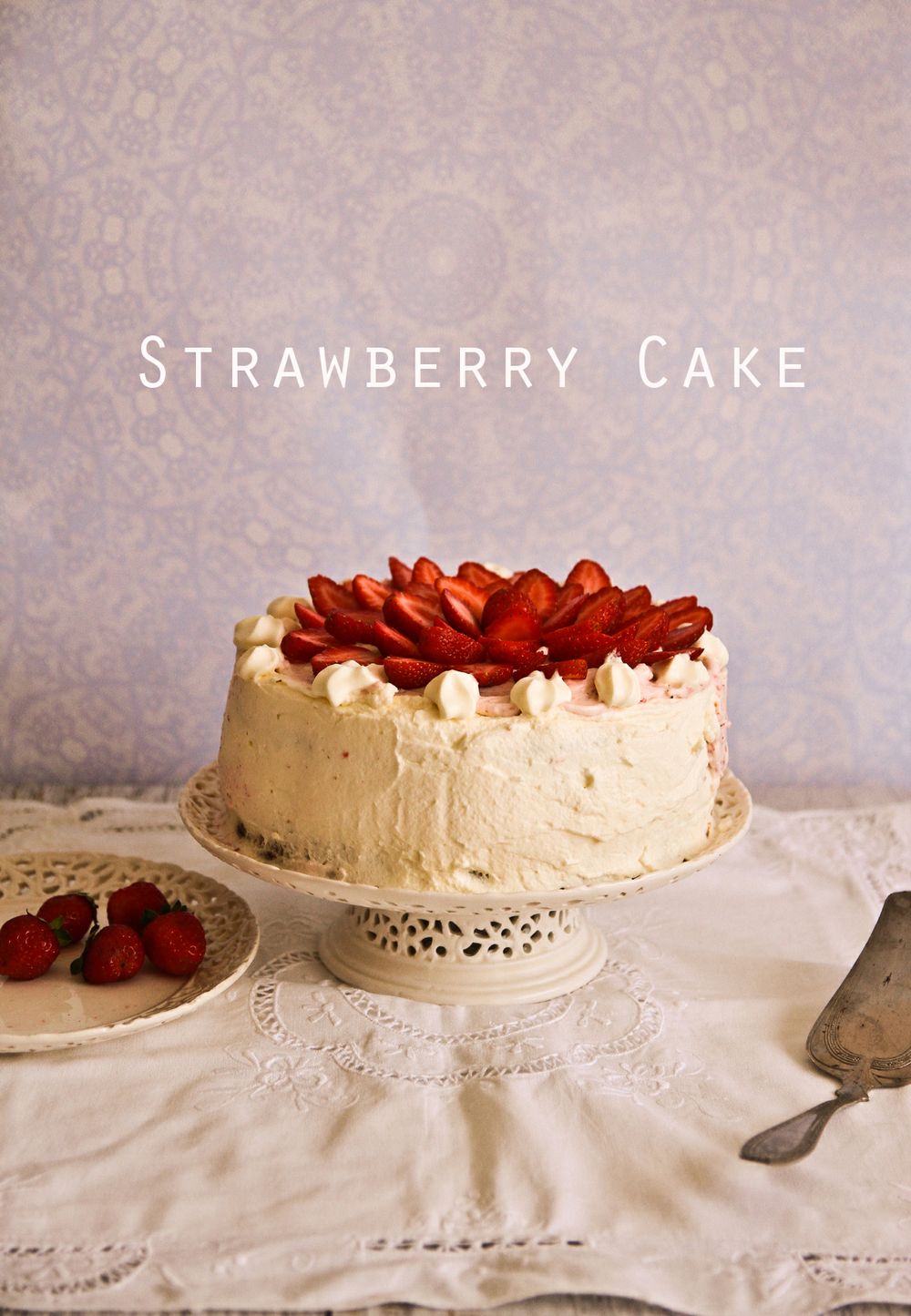 A couple of years ago, a friend of mine Teena had a birthday party. Mr NQN was unable to make it because he was asked to go sailing one afternoon and having not been on the water for a few months, he decided to go sailing instead of going to her brunch. He sent her an apologetic text message letting her that he wouldn't be able to come along. I turned up by myself and the brunch went smoothly. I apologised to her for his non attendance and she was understanding. Having lost her husband Philippe to many a rugby game, she knows that some menfolk love their sport.

It was roughly one year later that we were having another birthday dinner for her. Her phone beeped and she looked at it and her expression puzzled. She turned to Mr NQN and asked him what he meant by his text.

"I didn't text you" he said, his brow crinkling so she showed him her phone. 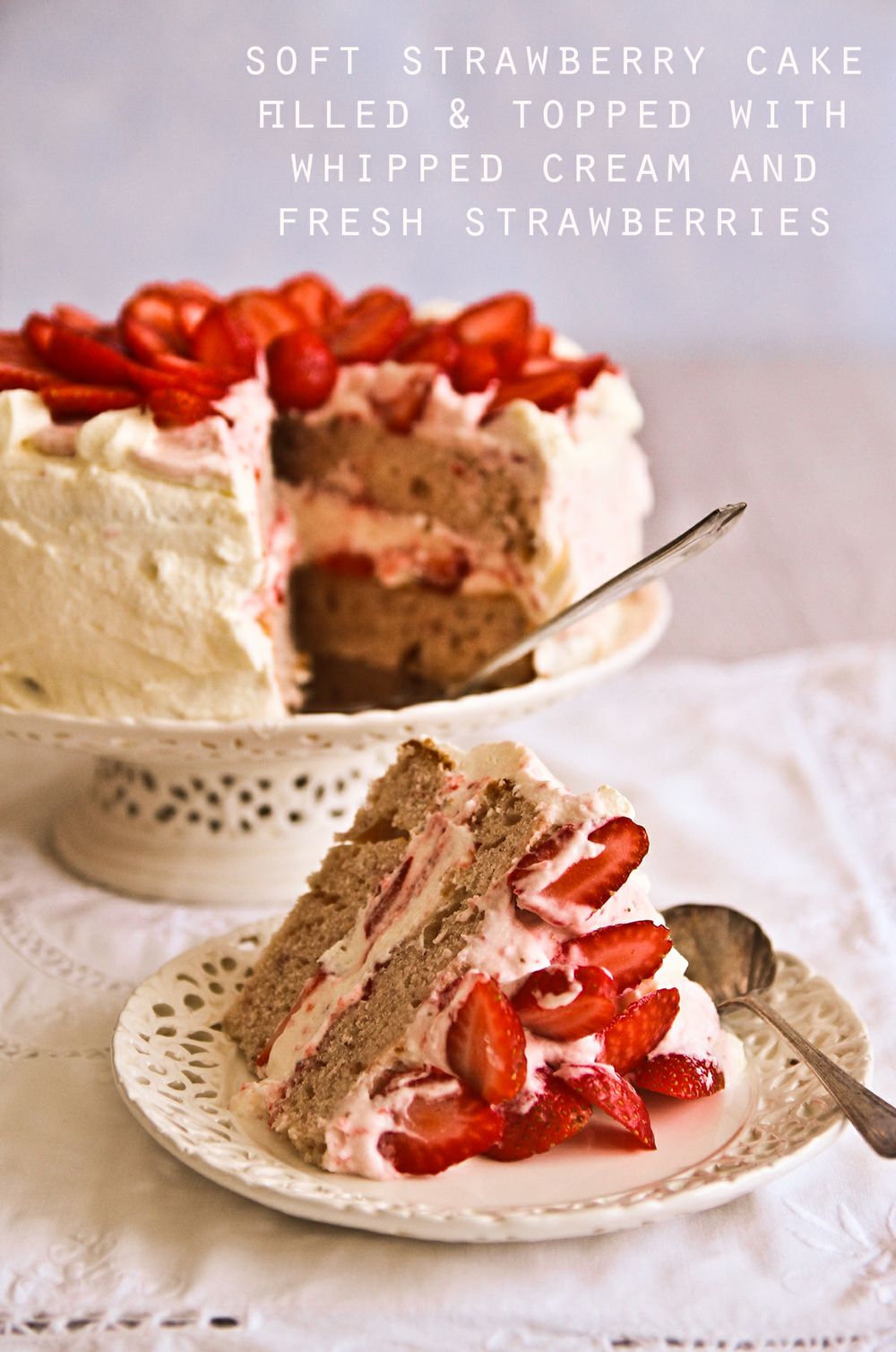 It read, "Sorry I can't make it to your birthday today. I hope you have a Happy Birthday."

It turns out that the text had arrived about one year later while Mr NQN was sitting near her celebrating the next year's birthday! And unlike the text, I have found that some things are worth waiting for.

The first time I heard about the Elvis strawberry cake was on an episode of Oprah that screened years ago. She and Gail travelled to Graceland to be met by Lisa Marie Presley who gave them a tour of the house and they sat down to a meal of Elvis's favourite foods. The one item that stood out was the strawberry cake that Oprah noticed because it was like fresh strawberries. I searched high and low for the recipe and there was nothing to be found. Other viewers that were also curious about it also searched high and low. Some had looked in their copies of the "Are You Hungry Tonight?" cookbook but alas it wasn't there. 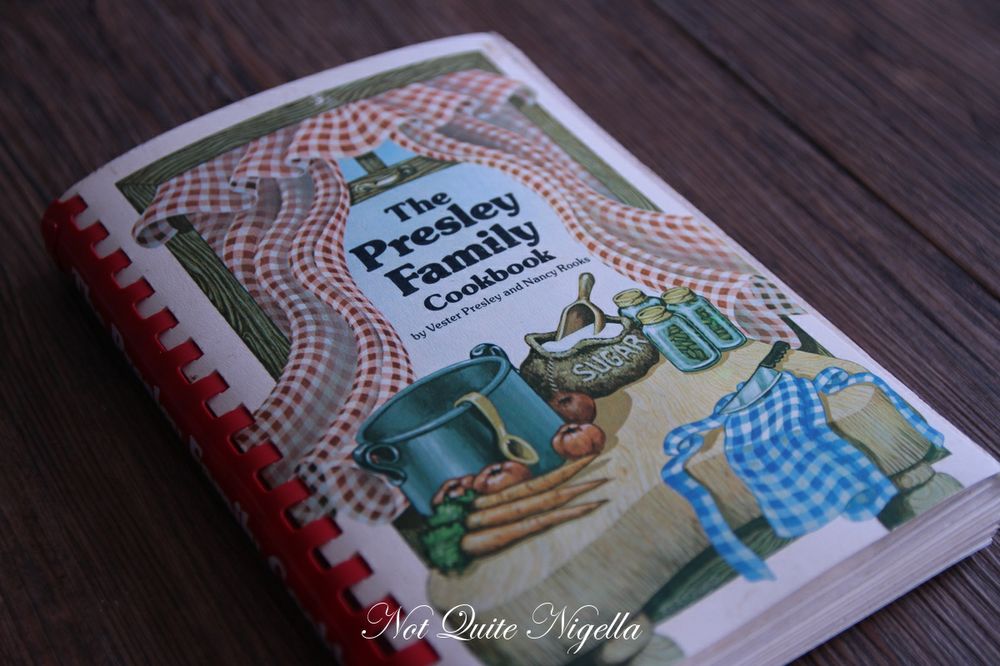 It was late one night when Queen Viv, Miss America, Mr NQN and I were walking along Crown Street in Darlinghurst. Queen Viv pointed at a display in Route 66 which showed Cheesy Poofs, Duff Beer and a copy of The Presley Family Cookbook by Vester Presley (Elvis's uncle) and Nancy Rooks (the maid and cook at Graceland). I went back a few days later and purchased it, delighted to see that it was an autographed copy! 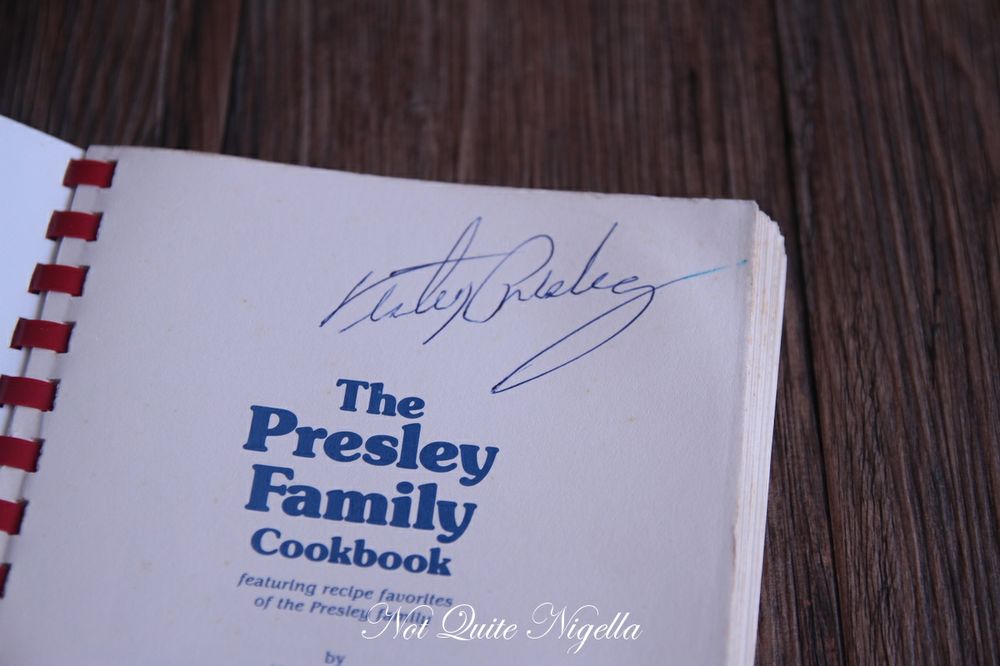 And even though it was years after I had seen it on television, the strawberry cake was the first thing that sprung to mind. I flicked through it and there was the peanut butter and banana sandwich (no bacon, alas!), swirl monkey bread, smothered chicken, potatoes(sic) lasagne and even Southern fried squirrel followed by an incredible pie section with thirty pie recipes. I've picked out the most interesting or peculiar but it is filled with delicious sounding recipes as well. And then there was the strawberry cake! 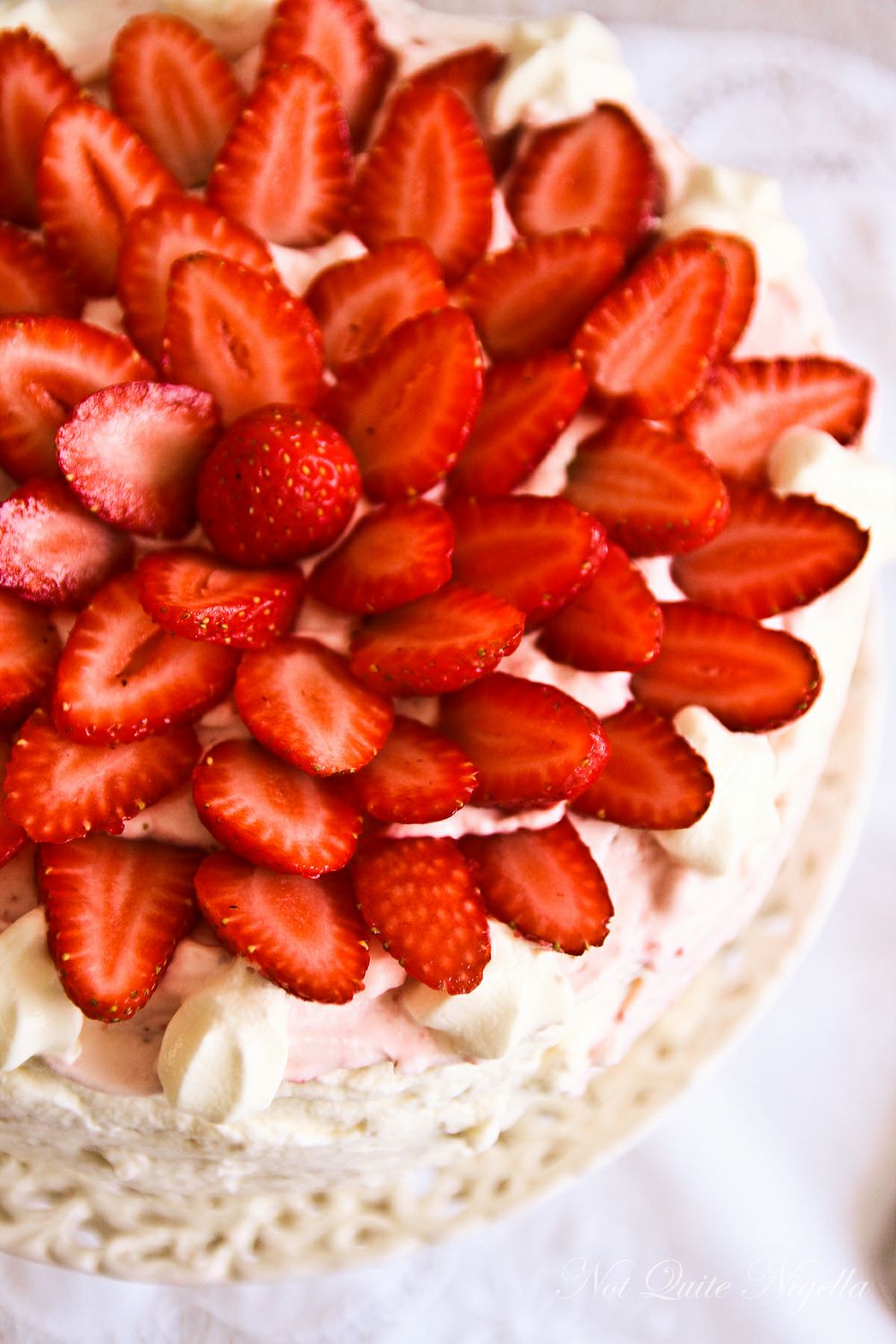 The Presley family's original recipe was quite different and was made up of just 60 grams of butter with no sugar at all which I thought was perhaps an oversight, given the fact that many things were high in sugar and fat. I added 1.5 cups of sugar to it because the strawberries didn't lend much sweetness to the batter at all. The cake itself was nice enough, quite firm and a little dry. I gave it to guests and one said that she liked it while Mr NQN didn't like it much. I personally thought that it was just too dry and decided to work on it to make it lighter. But in the interests of sharing the original Elvis recipe with you, I thought I'd put it below in case you wanted to give it a go yourself.

So tell me Dear Reader, do you like retro recipes? And do you ever think that we would be better off without smartphones or do you think that they're essential? Do you use them for basics like calling and texting or do you use it for internet access, tweeting and facebooking? 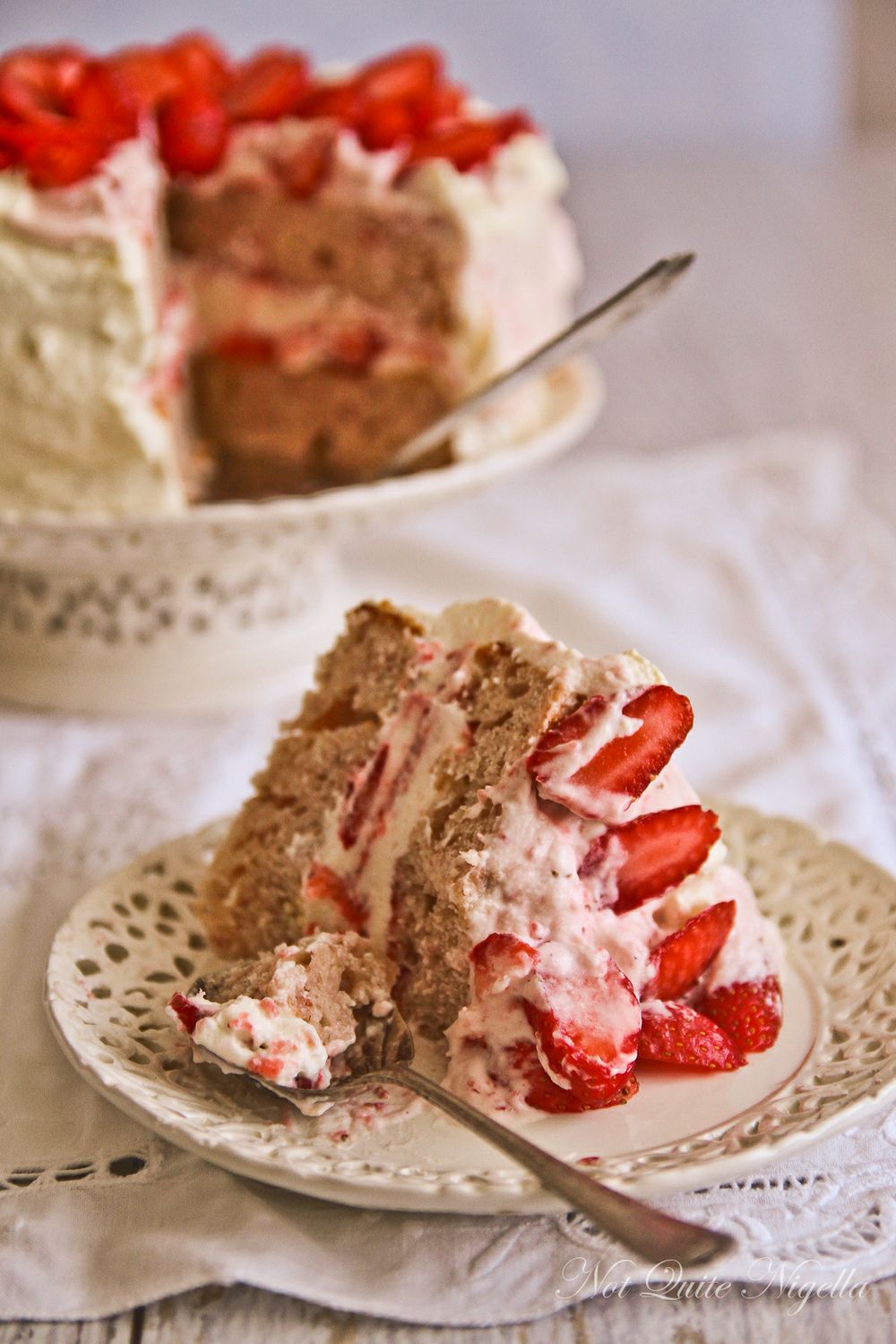 Oh and before I forget, I was in this month's Dolly magazine on an article about blogging! How exciting! I can't imagine that my teenage self ever thought I'd be in Dolly! :) 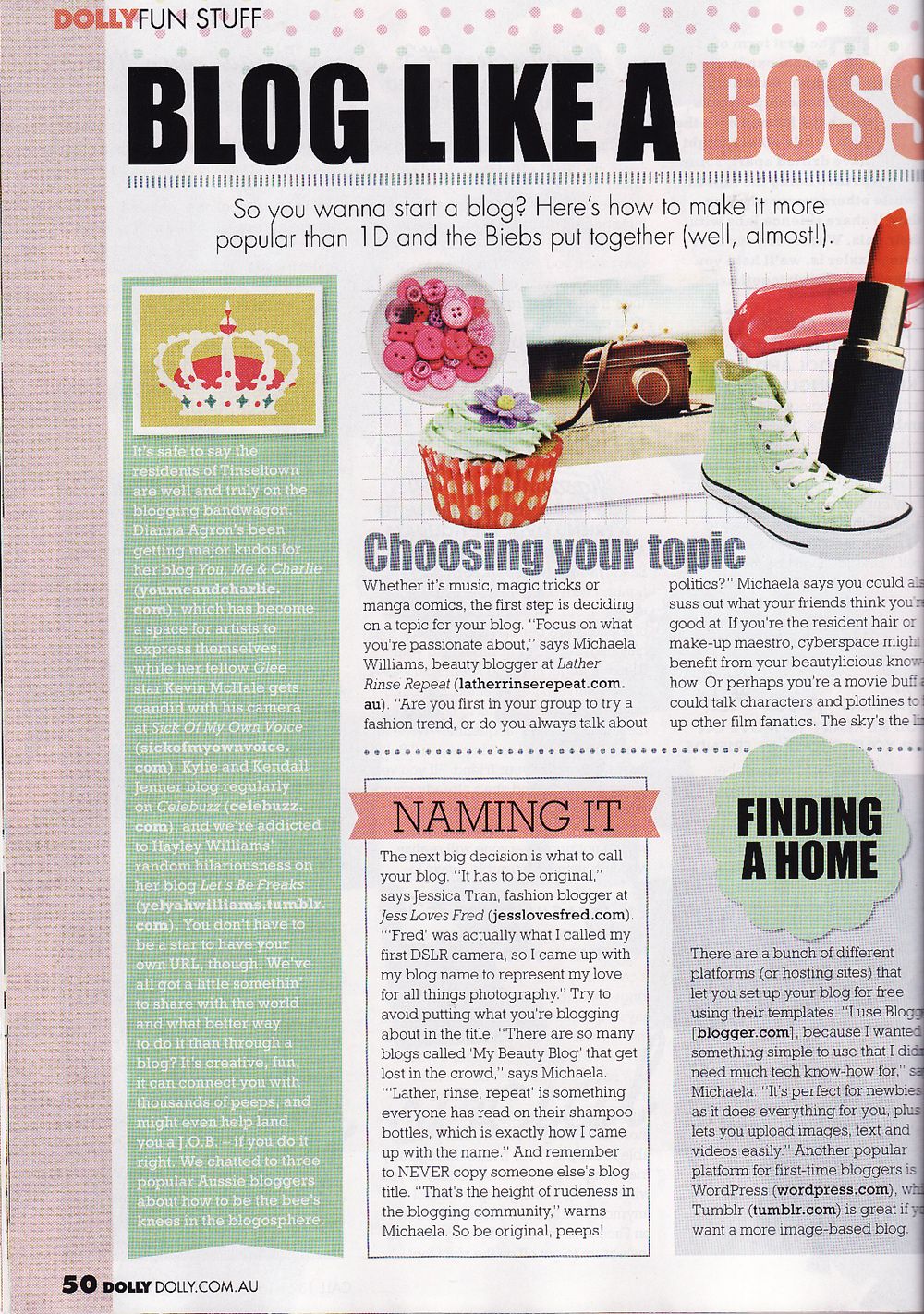 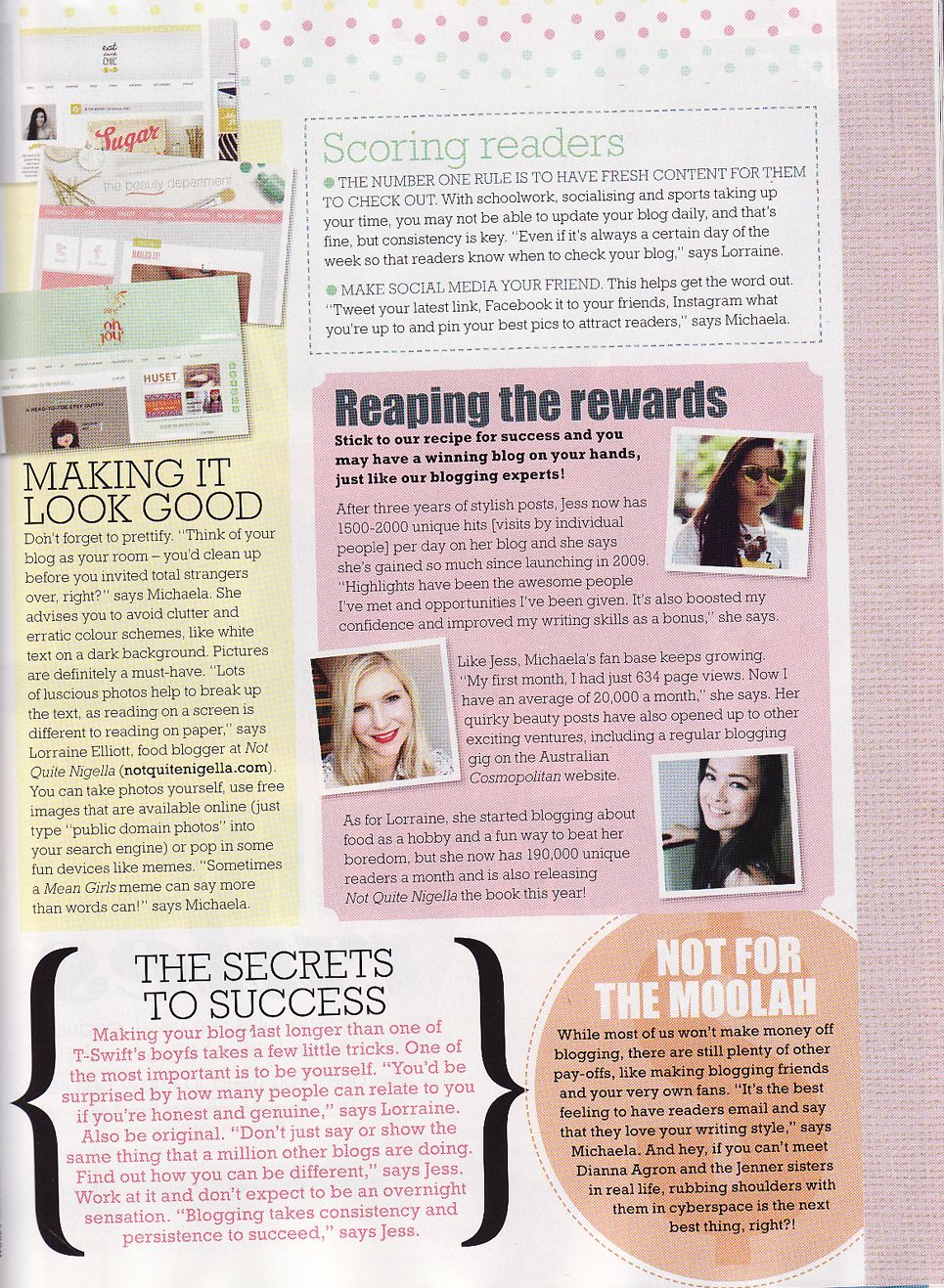 Step 1 - Sift ry ingredients together. Add milk and eggs, strawberries and butter. Beat batter until smooth and thick in texture.

Step 2 - Divide the batter between two greased and floured cake pans. Bake at 350F/180C for 30 minutes or until a skewer inserted comes out clean. Makes two layers.

Please note: there's no sugar stated in this recipe and I did find the cake quite firm in texture. 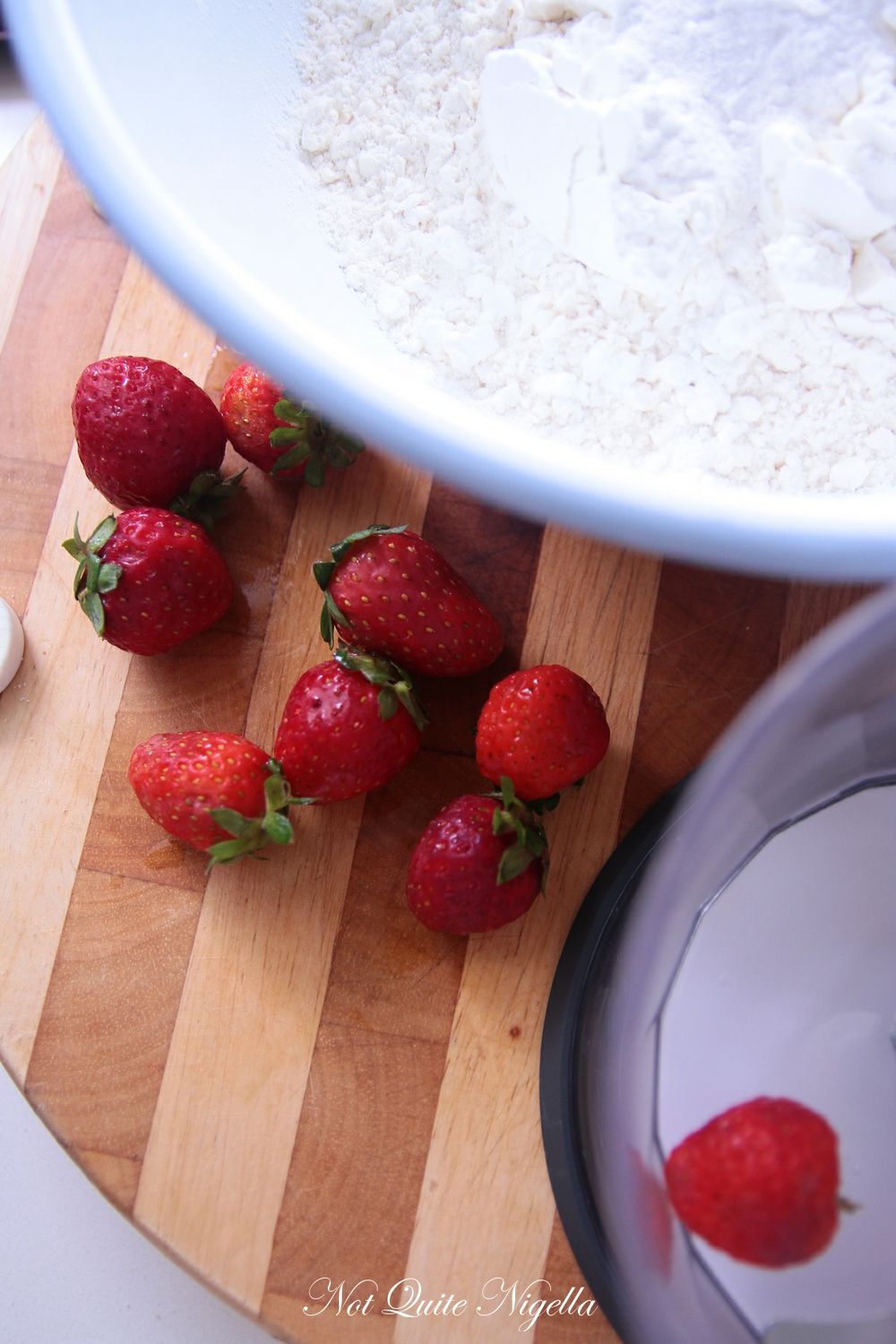 Tip: to make 1 cup of cake flour, add two tablespoons cornflour or cornstarch (NOT cornmeal) to a measuring cup and top the rest with all purpose plain flour to make 1 cup total. 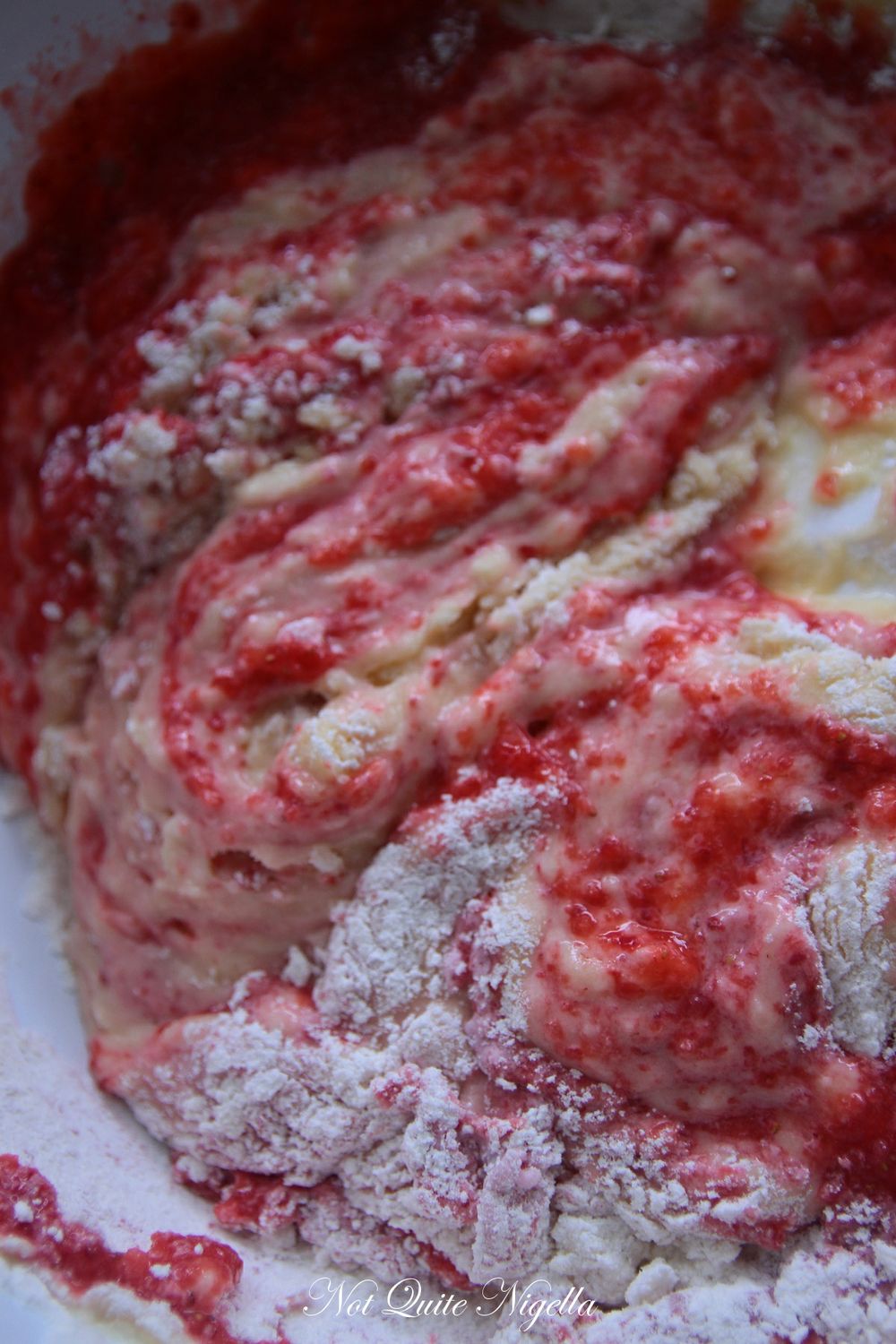 Step 1 - Preheat oven to moderate 180C/350F. Line 2 x 20cm cake tins with parchment on the bottom and sides. Beat butter, sugar and eggs in small bowl with electric mixer until light and fluffy. Stir in sifted flour, baking powder, milk strawberries. Divide mixture among the two tins and bake for 30-40 minutes until a skewer inserted in the centre comes out clean. 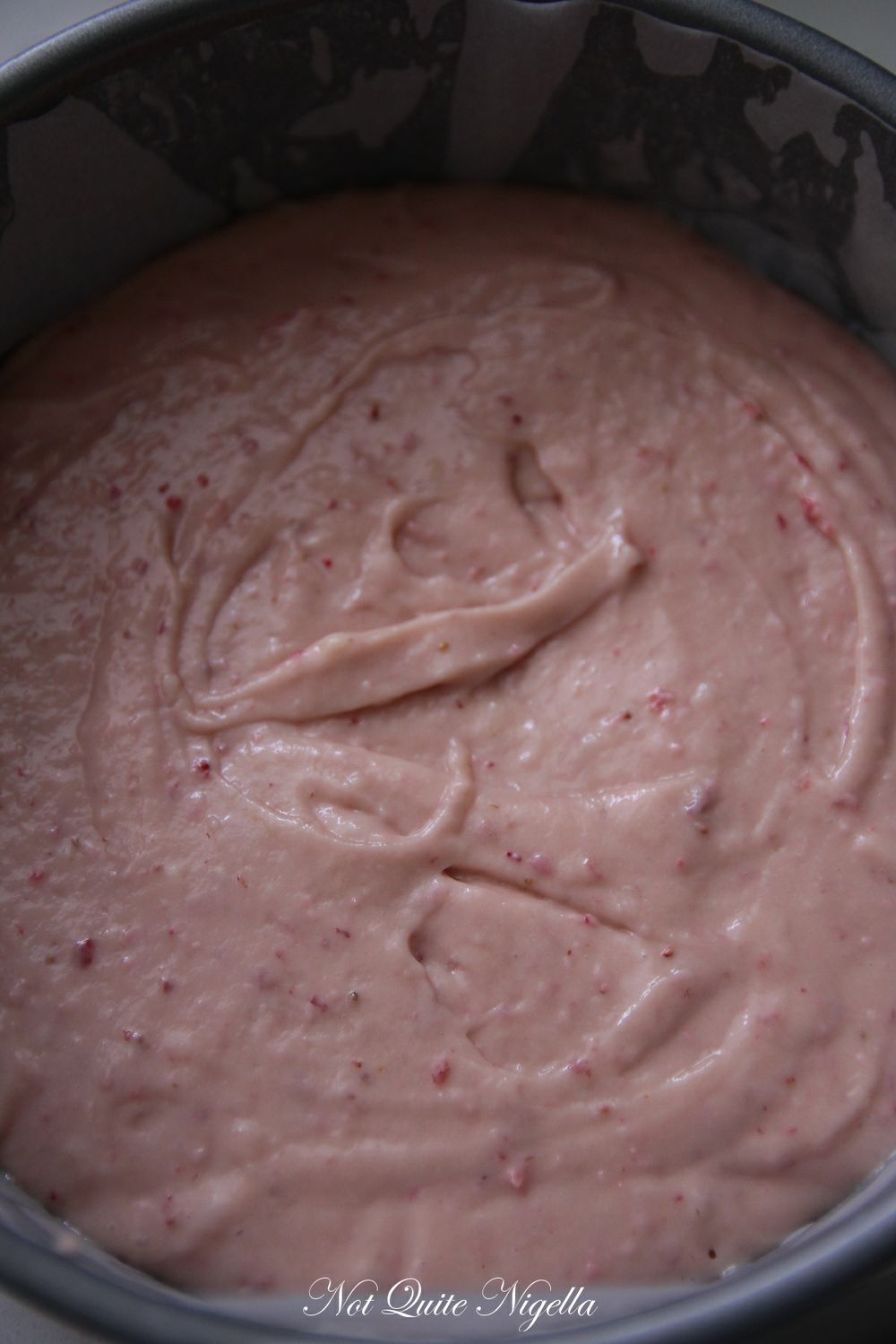 Step 2 - While the cake is cooling make the icing. Whisk cream until light and fluffy, gradually beat in icing sugar and whip until you get stiff peaks. Place in fridge. Wash and hull strawberries and slice. 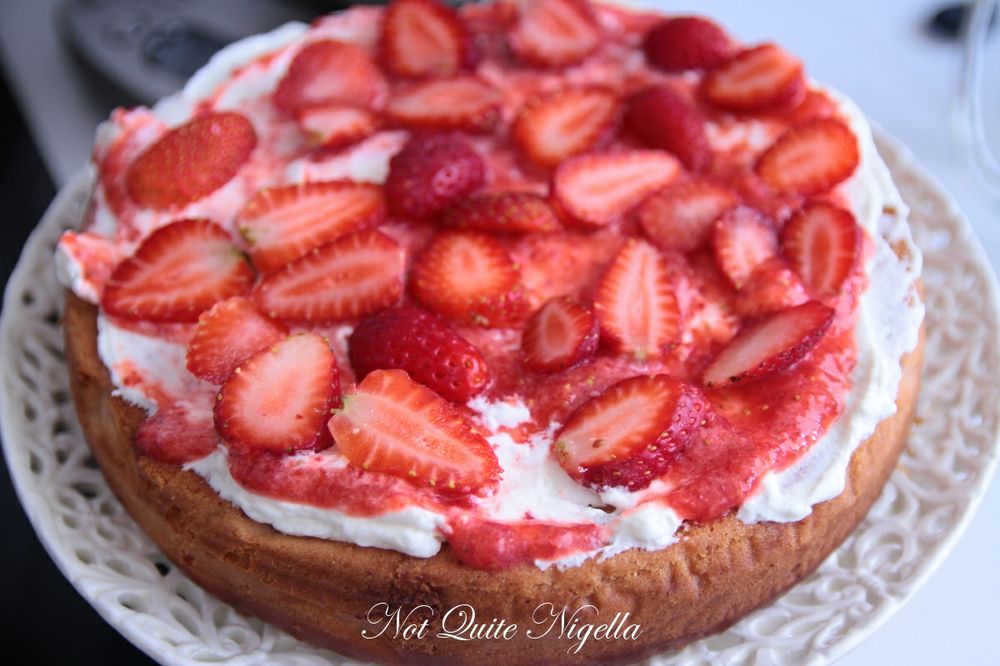 Step 3 - Once the cakes are completely cooled, trim the tops if you get any peaks on top. Remove the parchment and carefully turn the cakes upside down so that the smoothest side (the base) is facing upwards. Spread the bottom cake with a layer of cream and then a few tablespoons of the reserved strawberry sauce and then some sliced strawberries and then more cream and then place the other cake on top of this, base side up. 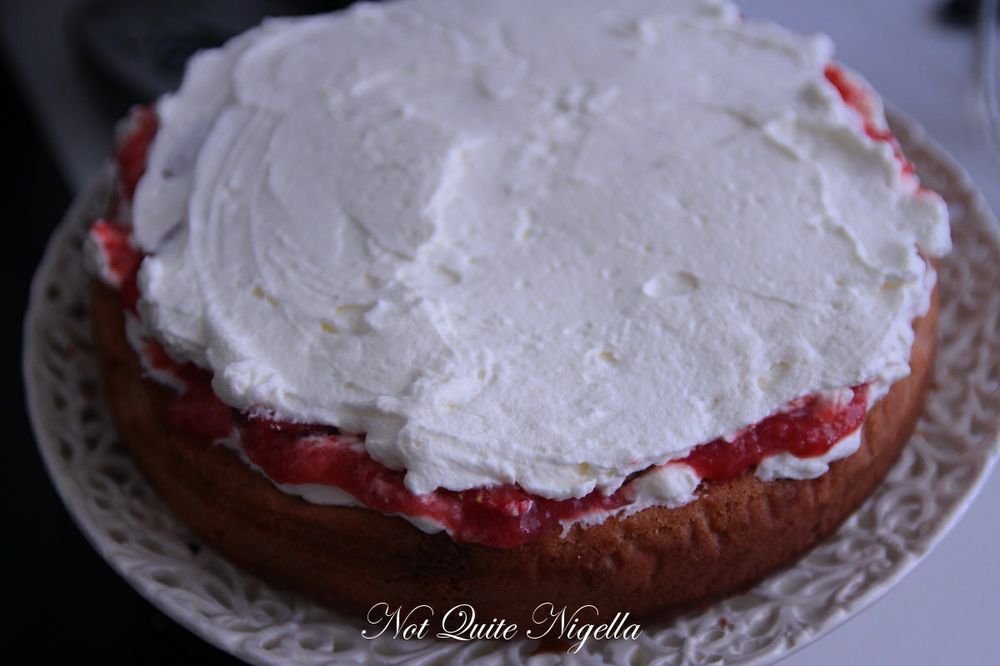