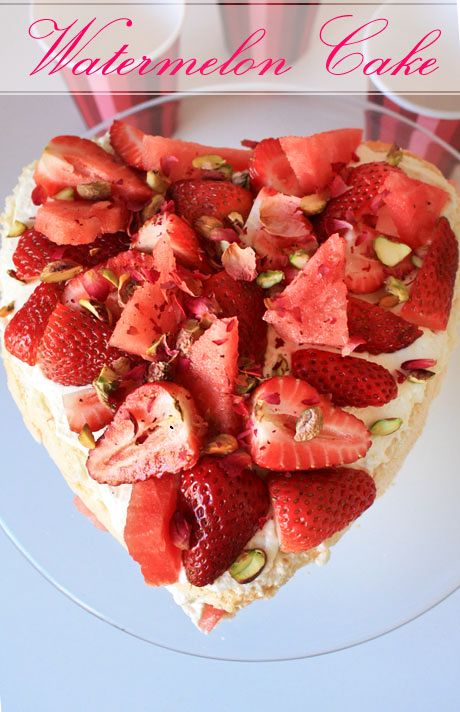 Last Wednesday was crazy. It was a day on which I'd scheduled myself three things to bake. I only had myself to blame really but the problem, and it wasn't a problem at all you understand only so far as my insane scheduling practices was concerned - was that I was going out to dinner with Liss and Chantelle. And somehow I was thinking that I would whip up a Watermelon cake based on the one I had at Black Star Pastry a few months back. 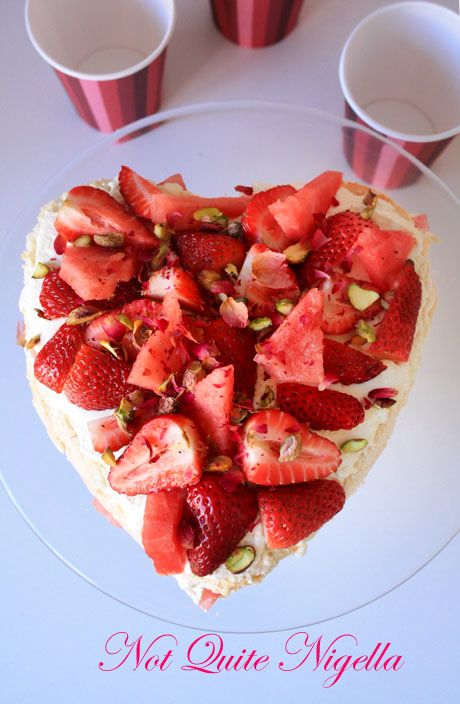 Once I started the process the madness began. I thought that putting it in a heart mold would be lovely. Until I tried to turn it out and realised that it would be impossible to trim it neatly in a heart shape. And then because we had a full to bursting fridge, a bottle of cream came crashing down to the ground and I managed to salvage half of it although this was not quite nearly enough so I put in an emergency phone call to my parents who live nearby and who were luckily about to going shopping. Everyone needs parents like that. Then the light turned funny, you know that oh so yellow afternoon light that confounds afternoon photography and I couldn't get the white balance right. And then...well you don't want to know but I didn't quite have a breakdown but I didn't get the photography finished for this nor the other two items so a hurried message was relayed to Mr NQN to not eat any of the marked food before I high tailed it out of there to meet Liss and Chantelle for dinner.

Despite the dramas the cake was delicious, there was no doubt about it. The watermelon gives it a refreshing quality and although it's not _exactly _like the Black Star Pastry cake, I like to think that it definitely pays homage to it. There is no question that strawberries and cream go well together and the sweet meringue-like dacquoise is reminiscent of pavlova but with bursts of mouth drenching watermelon and crunchy toasted pistachios. 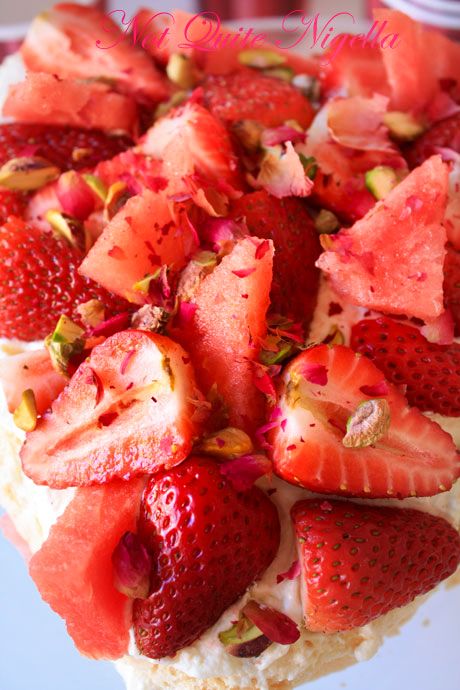 It had taken me so long to see Julie & Julia owing to the fact that it was released during the Sydney International Food Festival and a night free in October was a precious commodity which I grabbed with both hands and planted myself on our lounge with my husband and watched the shows I had missed. Also I have to say that Sony Pictures missed a Grade A opportunity to market the movie with bloggers having ignored most of the Australian food blogosphere. Anyway, so when I finally saw it I didn't really have any expectations for I hardly had a moment to contemplate it. I had heard many say that they liked the Julia Child parts over the Julie Powell bits but my friend Queen Viv whose opinion I trust, cautioned me that I would love both but perhaps find an affinity with Julie Powell more whereas the Julia Child parts were seen through rose coloured glasses. 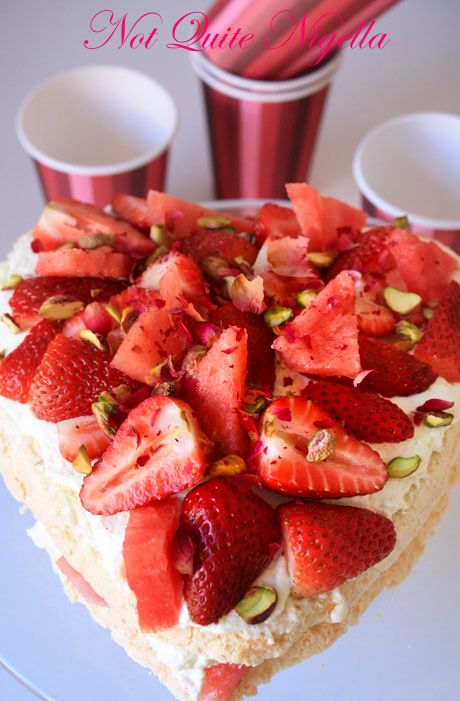 Whilst the Julia Child bits were wonderfully upbeat and who doesn't adore Parisian scenes especially ones as far as food are concerned, I definitely adored the Julie Powell bits that much more. I agreed with Queen Viv, the Julia Child bits were like a romantic comedy  (a genre that I just do not go for) whereas the Julie Powell bits felt more real and absolutely relatable. I understood her joy at getting a comment, the confusion by parents at what blogging actually was and what the point was and the blogging through sickness and tiredness. I won't spoil the plot for those interested in seeing it and I think we all kind of know the ending (she got a book deal and a movie no?) but I did in a funny way relate her meltdowns. I haven't had them as extreme as hers as I didn't have such a deadline although after that afternoon with the kitchen catastrophes I felt like I was in my own movie and it was a comedy of errors. 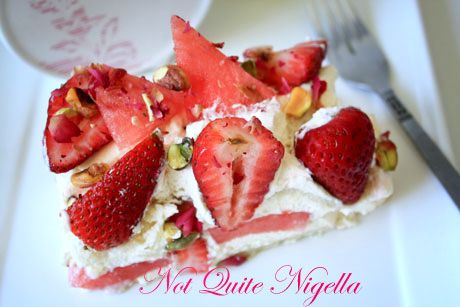 So tell me Dear Reader, have you seen Julie & Julia and what did you think of it? 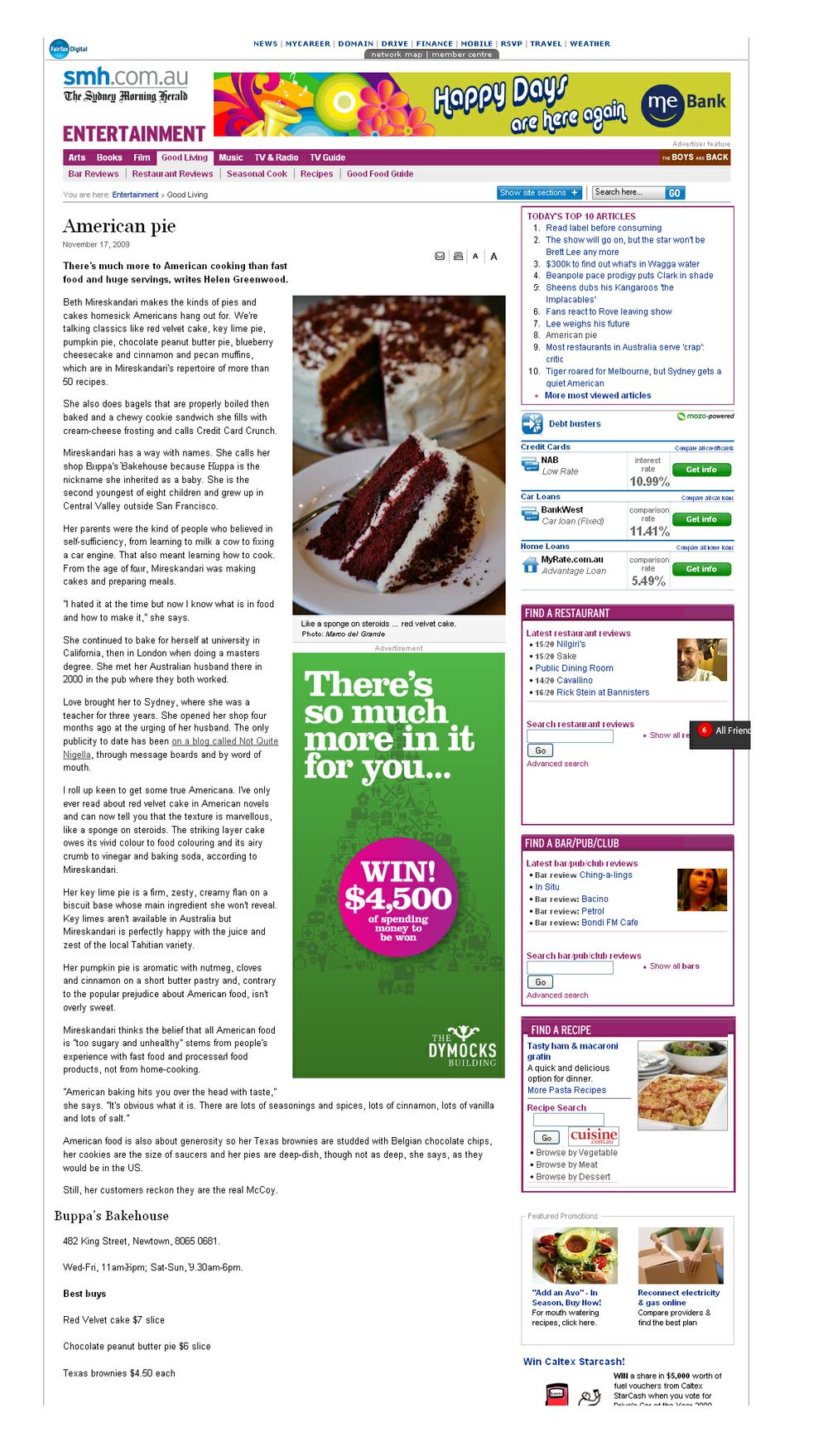 And in some very, very exciting news, I am mentioned in today's Good Living (foodie bible of Sydney) for my story on Buppa's Bakehouse! You can now find me doing a happy dance in my kitchen :) 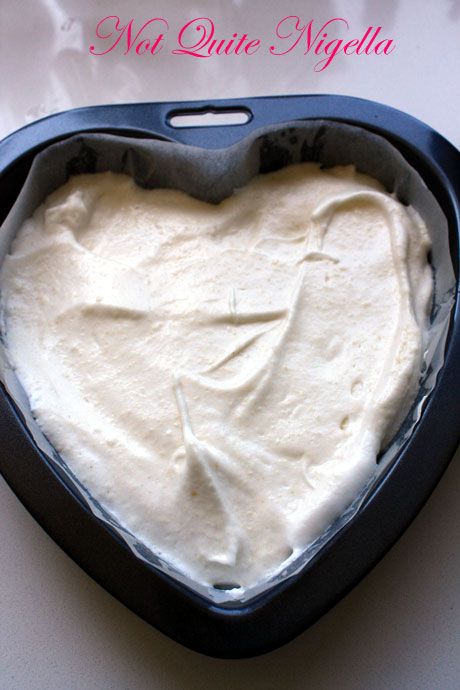 Step 1 - Make the dacquoise. Preheat the oven to 105C/220F. Trace a rectangle (I made a heart but a rectangle is easier to trim on the sides). In a separate bowl, mix almond meal and 1/4 cup sugar. Ensure that your beater and bowl are clean and free of grease.  Beat eggs until soft peaks form and then add 1/2 cup of sugar one tablespoonful at a time until stiff peaks are reached.

Step 2 - Pipe the dacquoise onto the parchment (I didn't I spooned it and smoothed it but thinking back piping would have been a good idea) and make two cakes (you may even have enough for 3 depending on the size of your cake). Bake in the oven for 70-80 minutes until dried out. Cool. 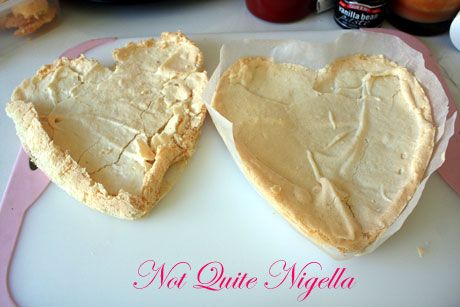 Step 3 - Whip the cream with the icing sugar until stiff-ish so it can hold the weight of the fruit. Slice the watermelon thinly just under 1cm in thickness and wash and hull the strawberries and slice in half. 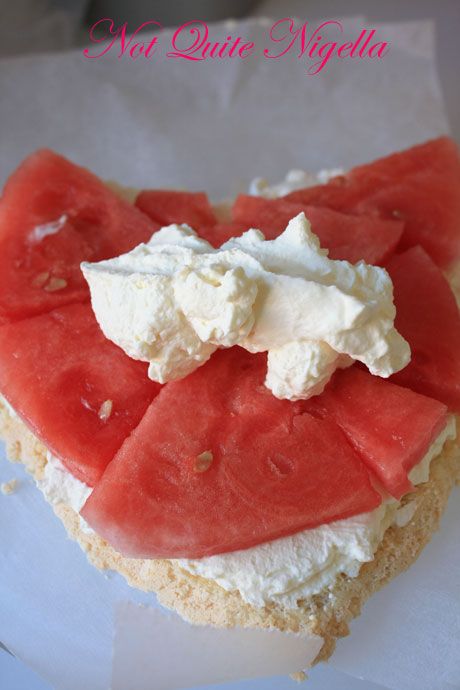 Step 5 - Place other dacquoise face down again and carefully peel off the parchment. Spoon remaining third of the cream on top of this and spread and then top with strawberries, small watermelon pieces, toasted pistachios and rose petals. You can cut this into pieces using a very sharp knife, I found that a gentle sawing action was the most effective to cut through it. 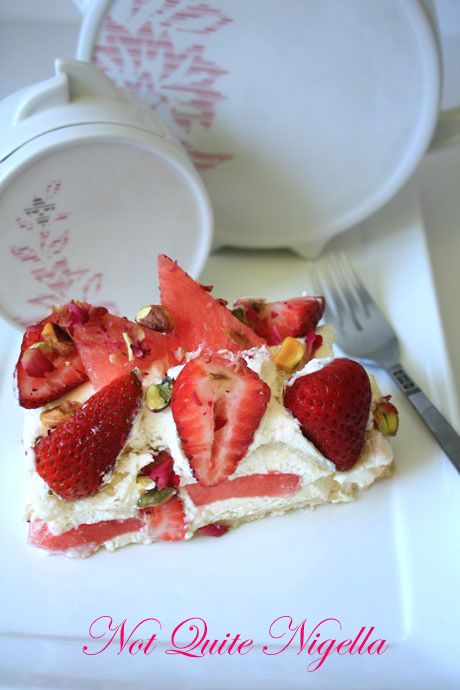