Made From Scratch: Perfect Gnocchi Recipe (My Former Nemesis!) 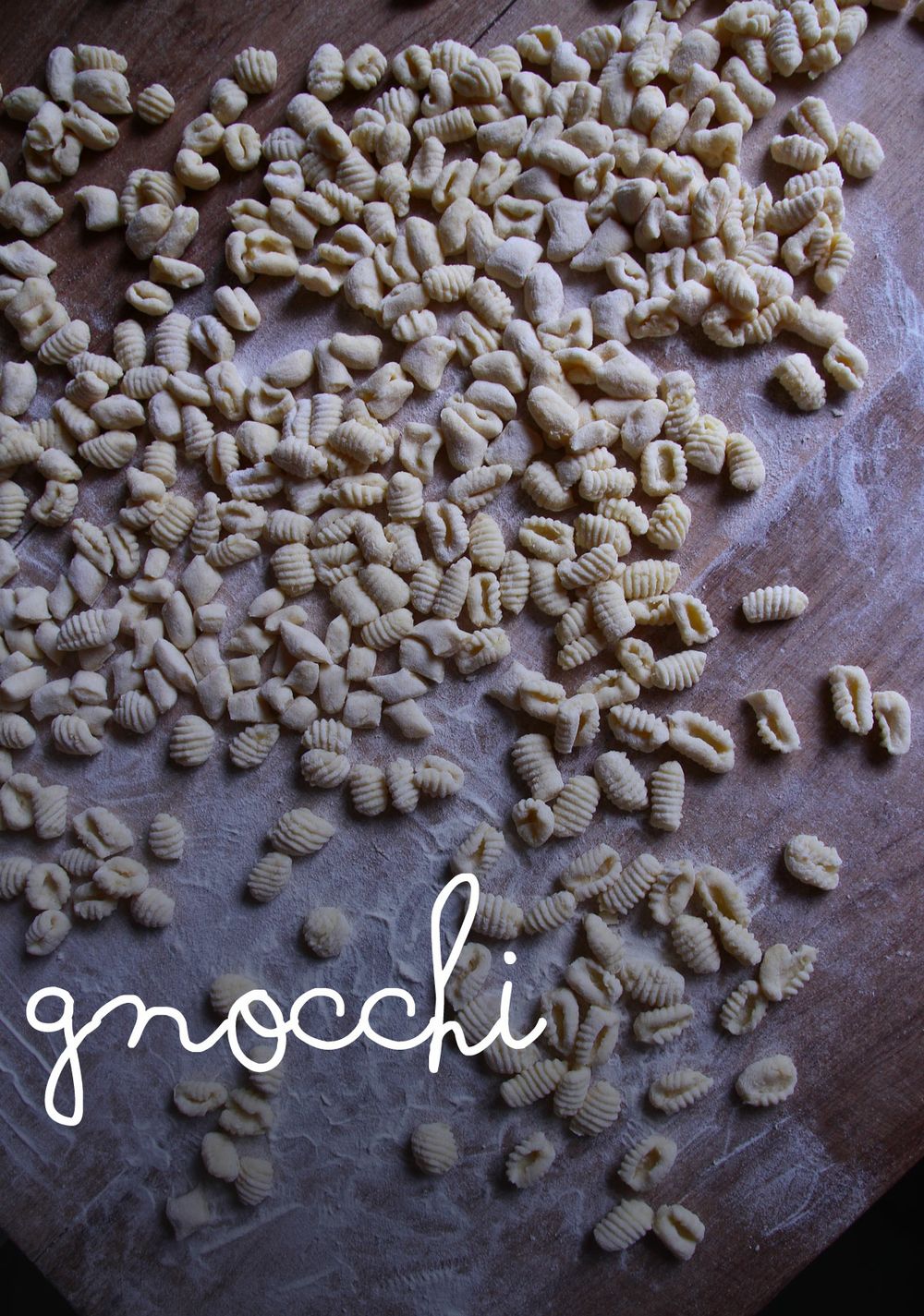 Dear Reader, I was up until this year, a complete gnocchi failure. I had tried at least a dozen times to master gnocchi and ended up with lumpy, heavy, starchy bullets. In fact, I think that's what one of my ex boyfriend's called them (and no, that's not why he was an ex ;) ). I hurtled from making pumpkin gnocchi which was an unmitigated, sloppy mess to gnocchi made with instant mashed potato no less. You see a chef had told me that to make good gnocchi you needed the potato to be very dry. He made his with Deb instant mashed potato powder. 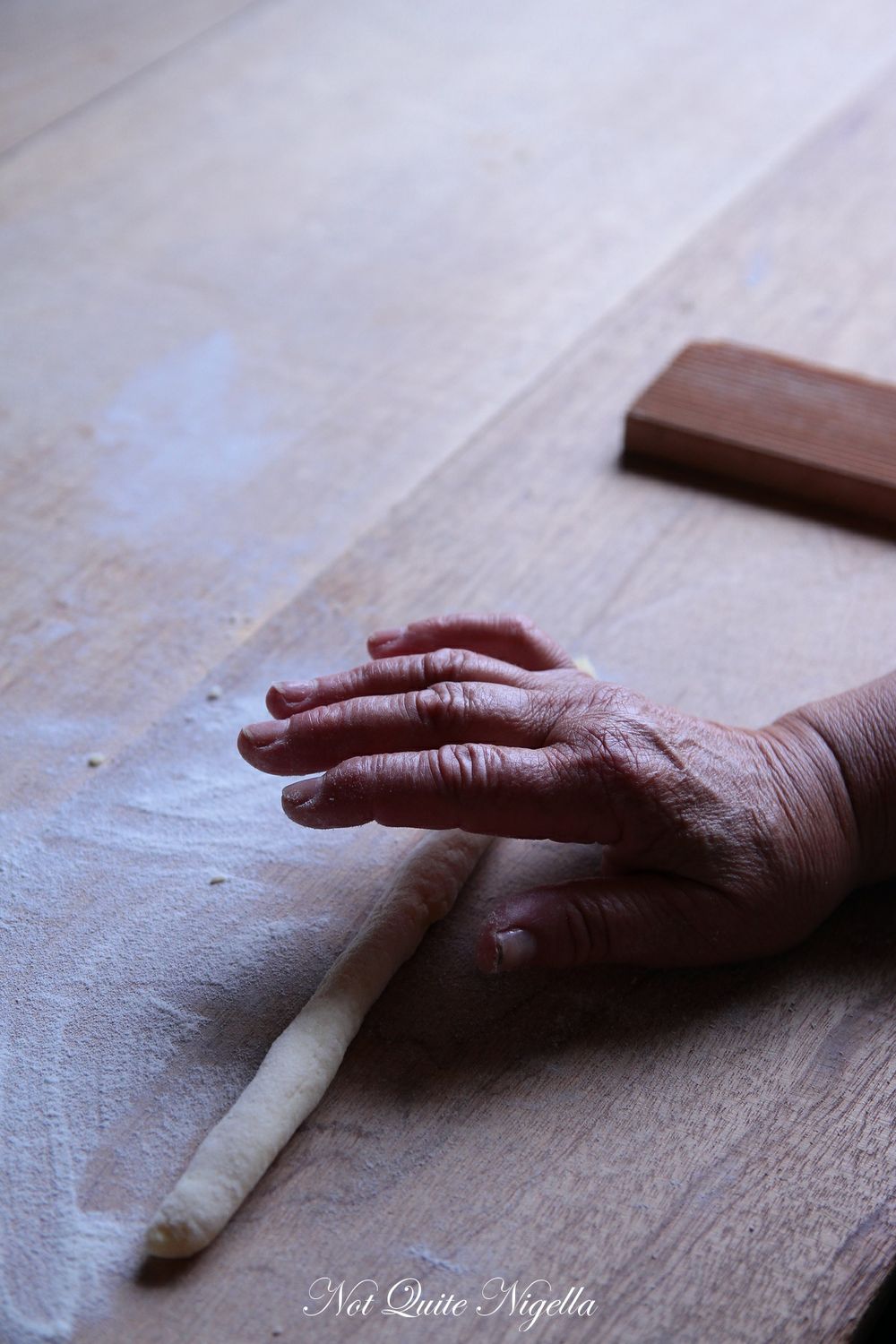 I was so excited about the idea of mastering gnocchi that I went to buy some instant mash and made it immediately. It was possibly the worst batch of gnocchi I had made. But enter Francesca. She is the mother of Tony Sabia of Puntino Trattoria in Darlinghurst. Every Wednesday morning, passersby see Francesca working away in the window from 5am until midday making pasta for the restaurant. 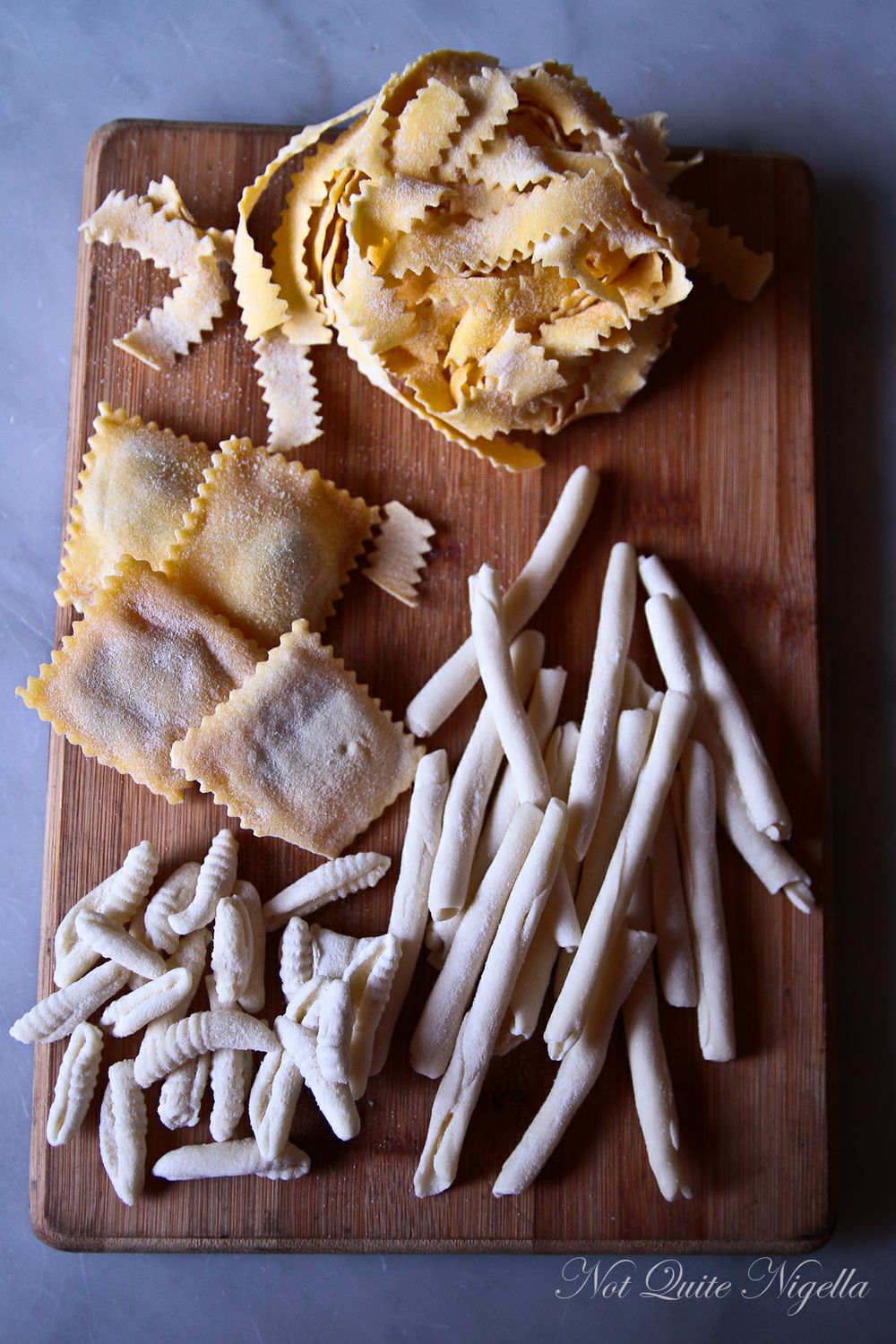 Their specialties are the gnocchi and "ferrietti con la mollica" a pasta made with a wire that must be rolled individually taking about two hours to work on two kilos of flour. Francesca's recipes are handed down from her grandmother and the family comes from the Basalicata region in Potenza province in a town called Viggianello, an ancient village of just over 3,000 inhabitants. 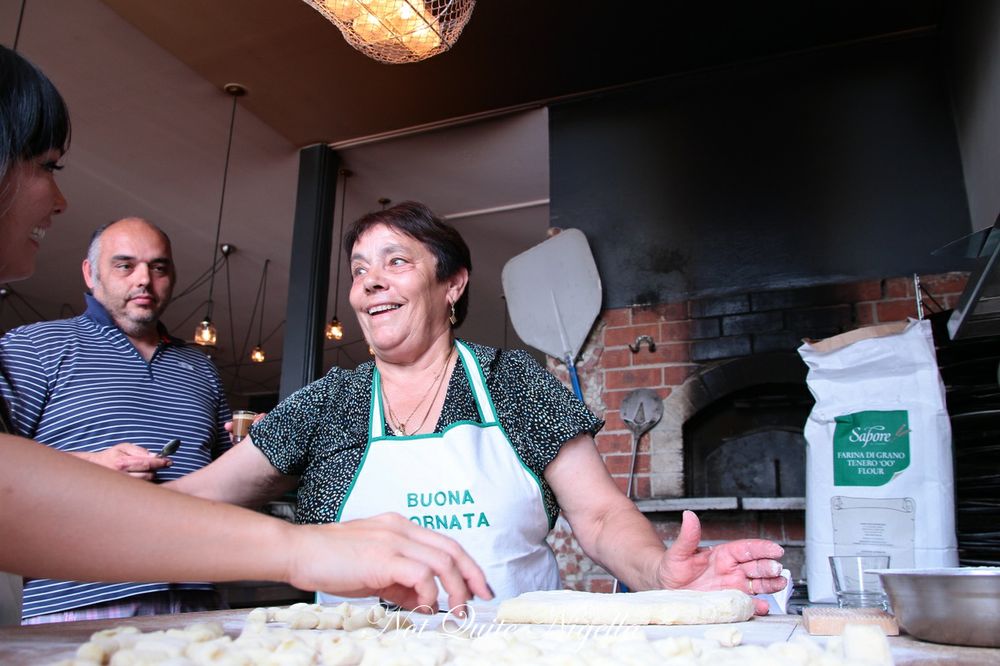 The gnocchi however, was a cinch and Francesca was going to be kind enough to show me how to make it. Francesca was softly spoken and warm and her eyes sparkled when we started to make the pasta. Her gnocchi was light, silky and simple to make with only two ingredients: potato and flour. 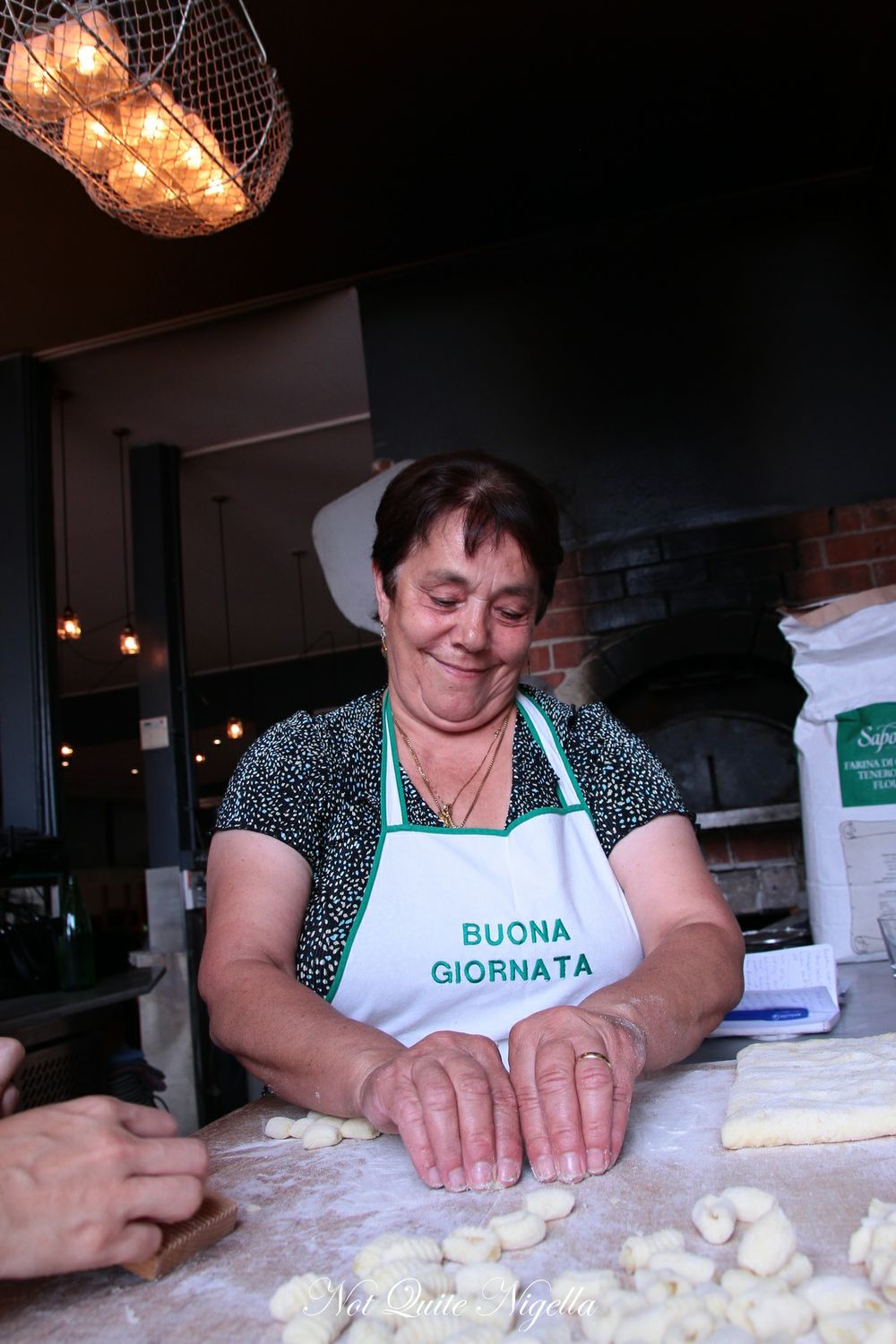 Use a fine 00 Italian flour. The key to gnocchi is to not allow the potato to take in too much flour which can weigh it down so ensure that the potato is completely cool by the time you add the flour which is in fact the thing that takes the longest. After that, it's really a matter of rolling, cutting and cooking the gnocchi. For the final step of rolling them, Francesca uses a special flour from Weston's Milling called Continental Sharps (sometimes called Continental Flour) which is coarse in texture, between an all purpose flour and a fine semolina. 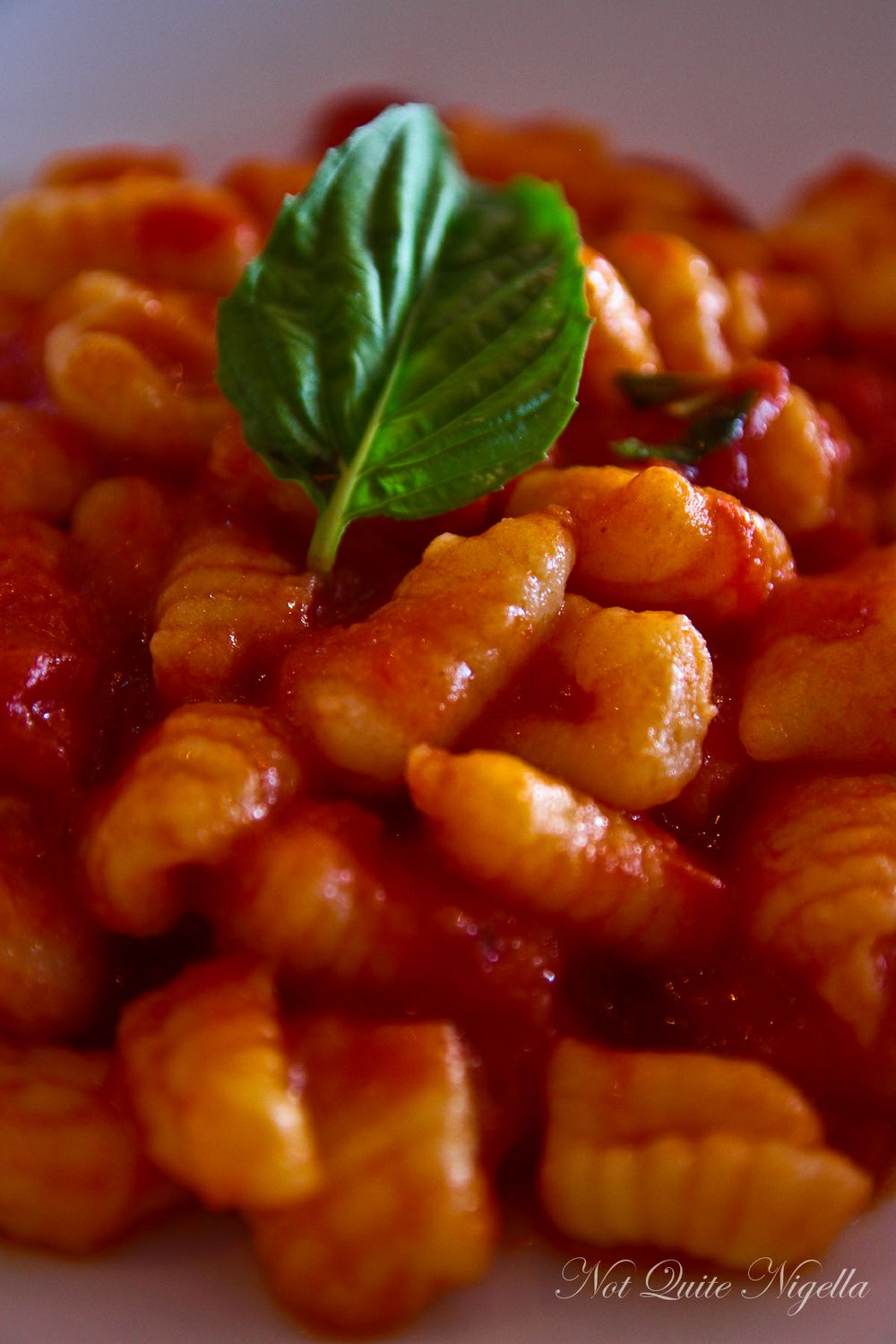 As I sunk my teeth into the sublime pillows of gnocchi, I felt relief and joy that I was no longer a gnocchi failure. And now I pass on Francesca's foolproof perfect gnocchi recipe so that you can avoid potato bullets or grenades (don't ask, one time they really were large grenades ;) ).

So tell me Dear Reader, is there an item that you have been unable to make? And have you ever tried making gnocchi? 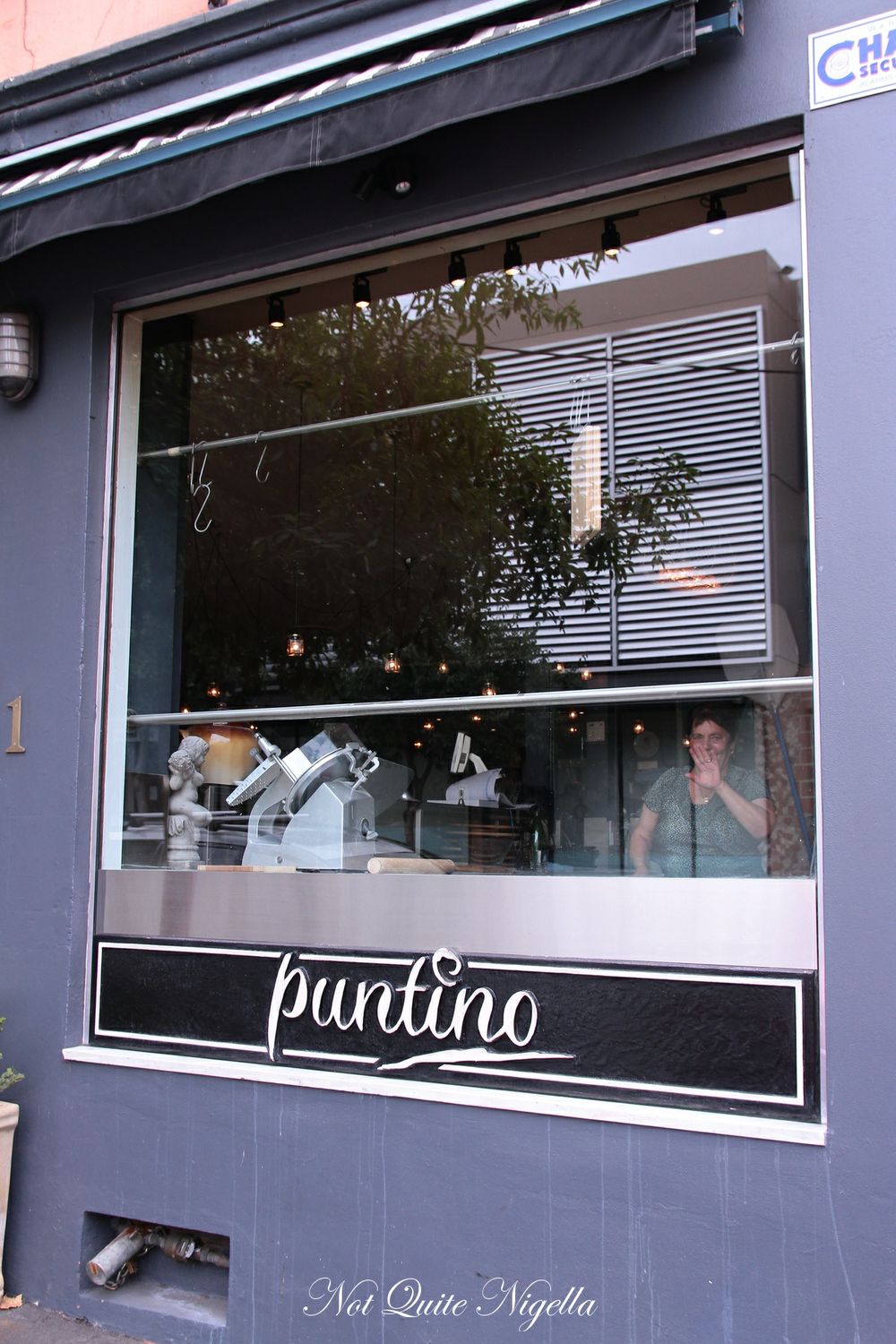 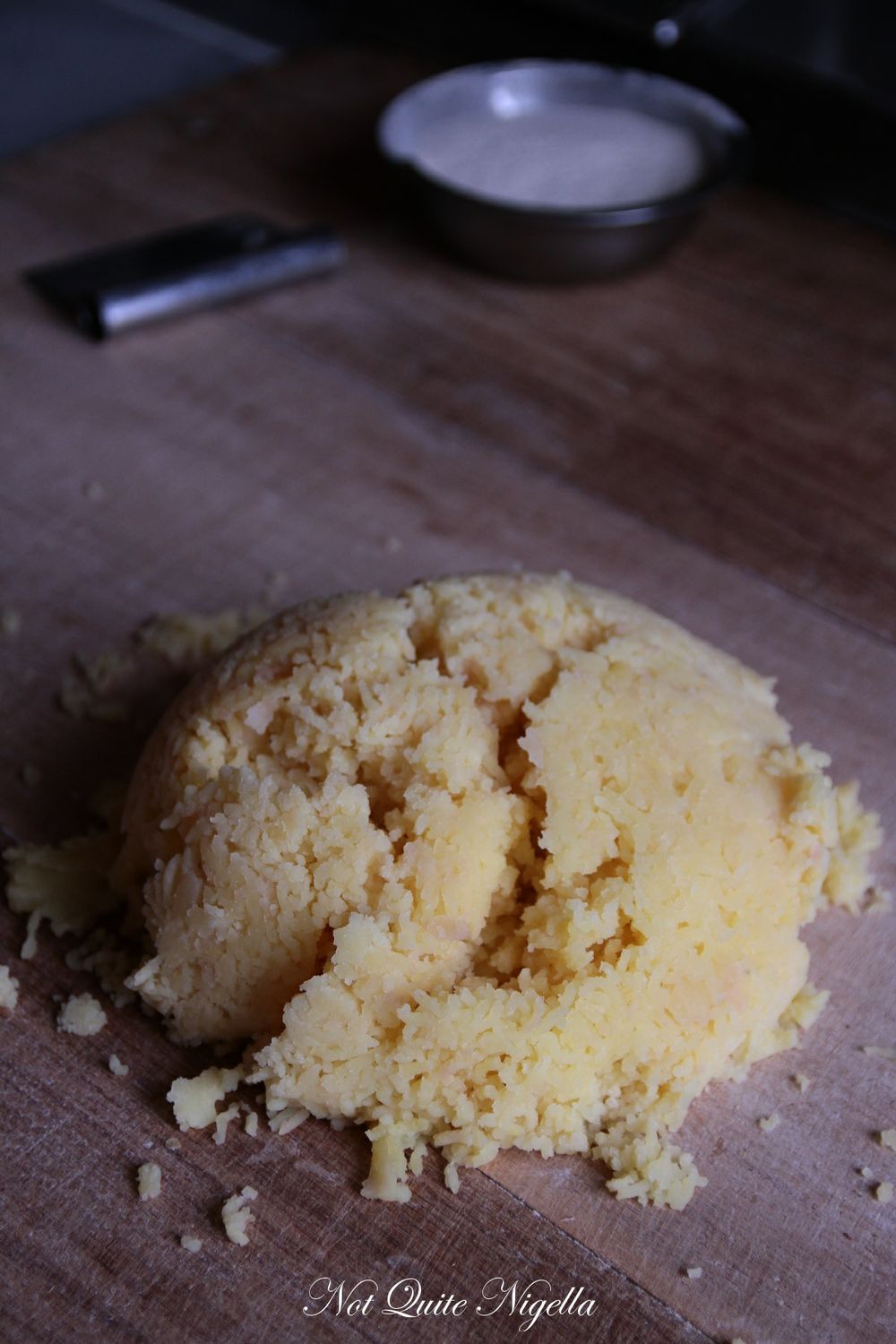 Step 1 - Boil the potatoes in their skins until soft. While the potatoes are still hot, take a potato ricer and push the whole potatoes through it making mashed potato. Discard the skins. Allow to cool completely - you can spread the mashed potato out onto a clean surface to facilitate cooling. 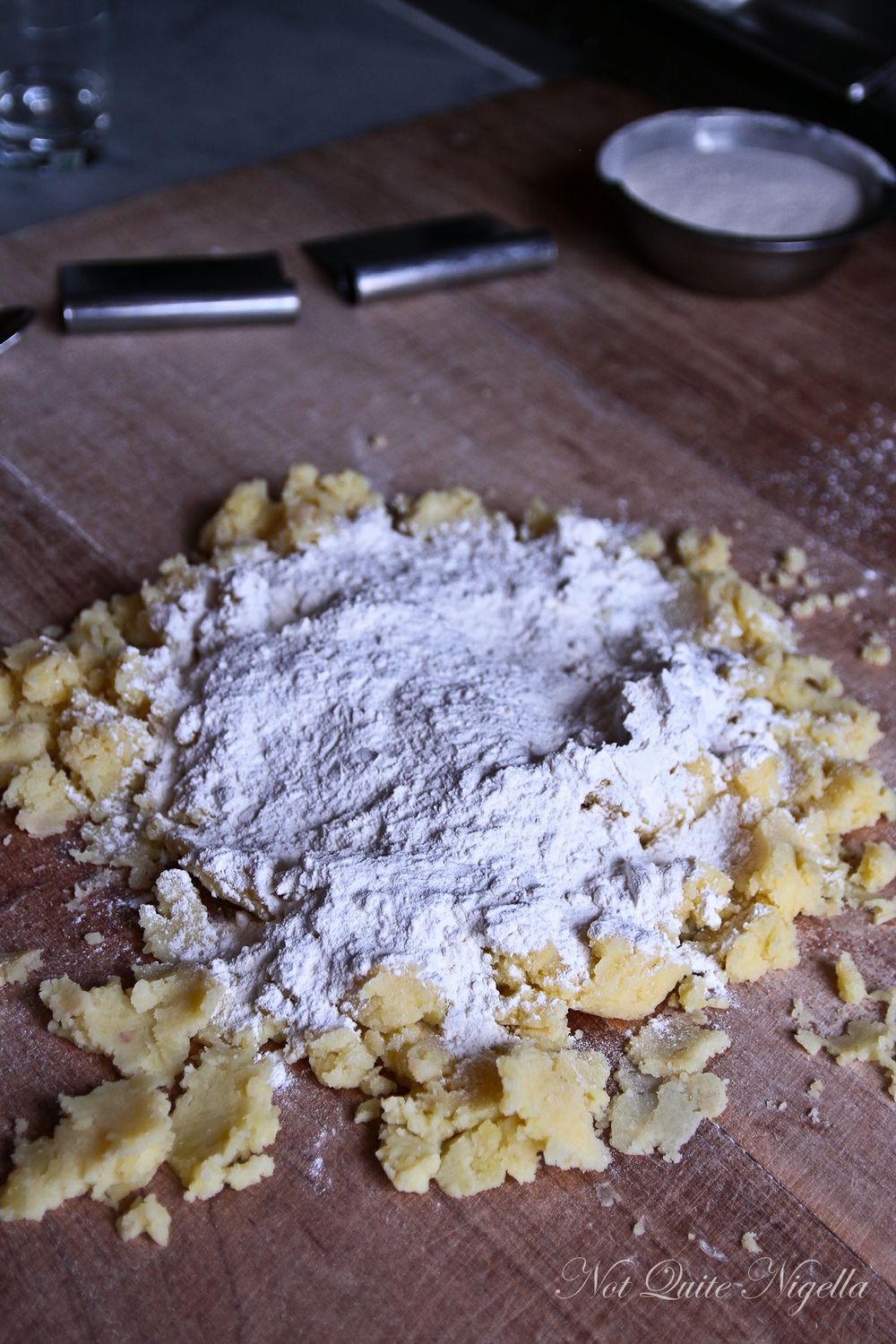 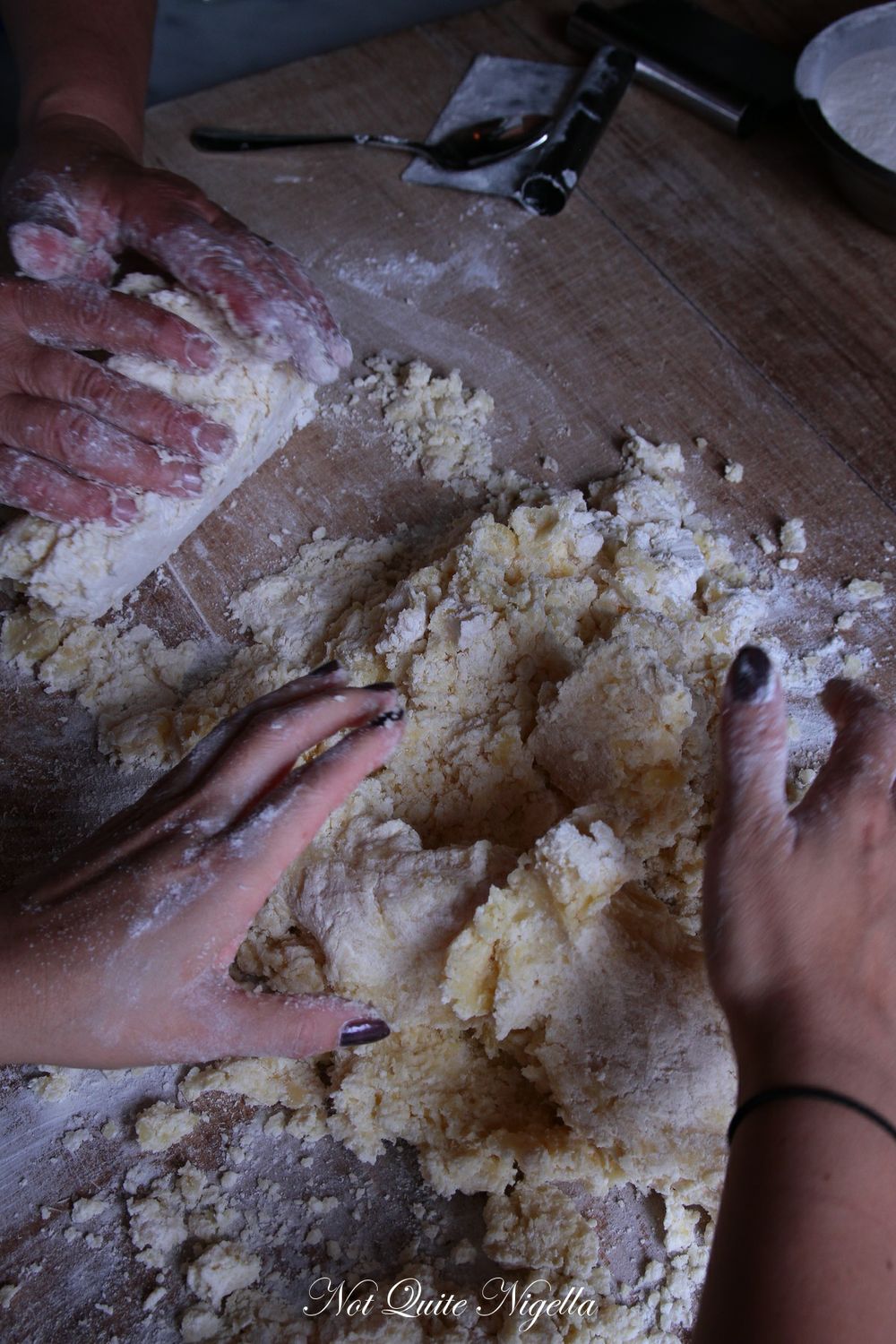 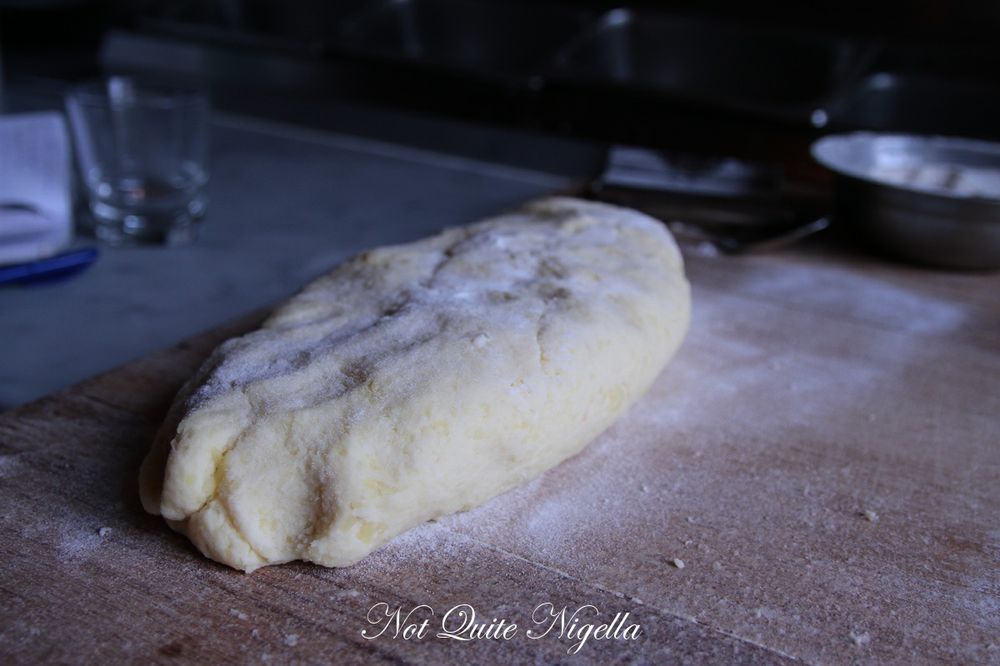 Until you get a dough

Step 2 - Put a very large pot of water onto boil as you want to cook the gnocchi straight away. Add the flour to the potato mixture and mix together until you get a cohesive dough. Take the dough and pinch off handfuls and roll it out into a log shape. If this is long, cut it in half or you can line up several logs together (making sure to flour them lightly on the outside so that they don't stick. 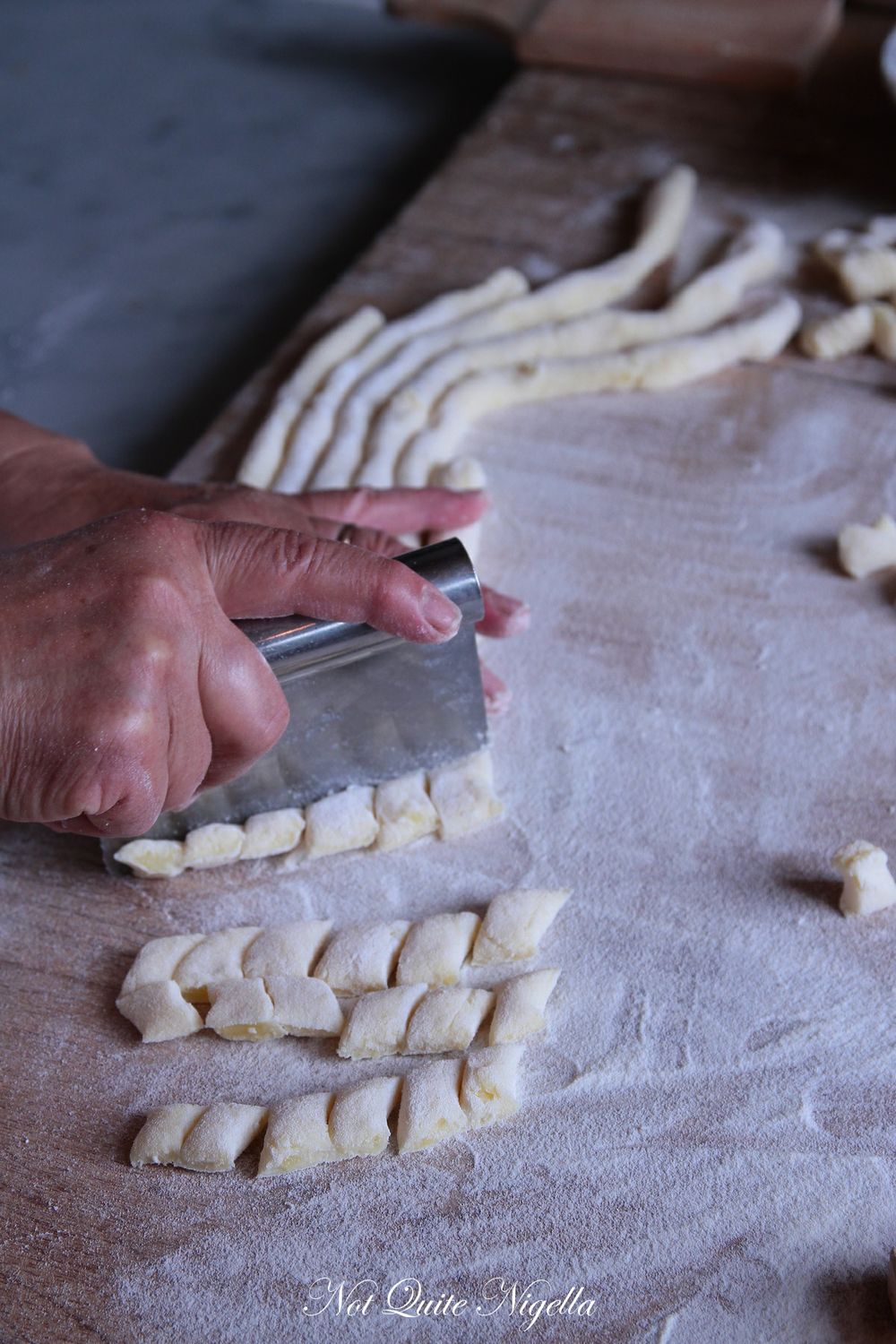 Cutting the gnocchi into small pieces

Step 3 - Cut them into small pieces. Using the gnocchi board, roll the pieces onto the ridged gnocchi board to get the gnocchi pattern. You can be quite firm with them and "flick" them off the board. You actually flatten them on the board and they curl around so that they aren't completely solid and have a cavity in the back of the ridge (see image below). They look a little like ears! If you use a fork, simply press the fork tines gently into the gnocchi pillows. 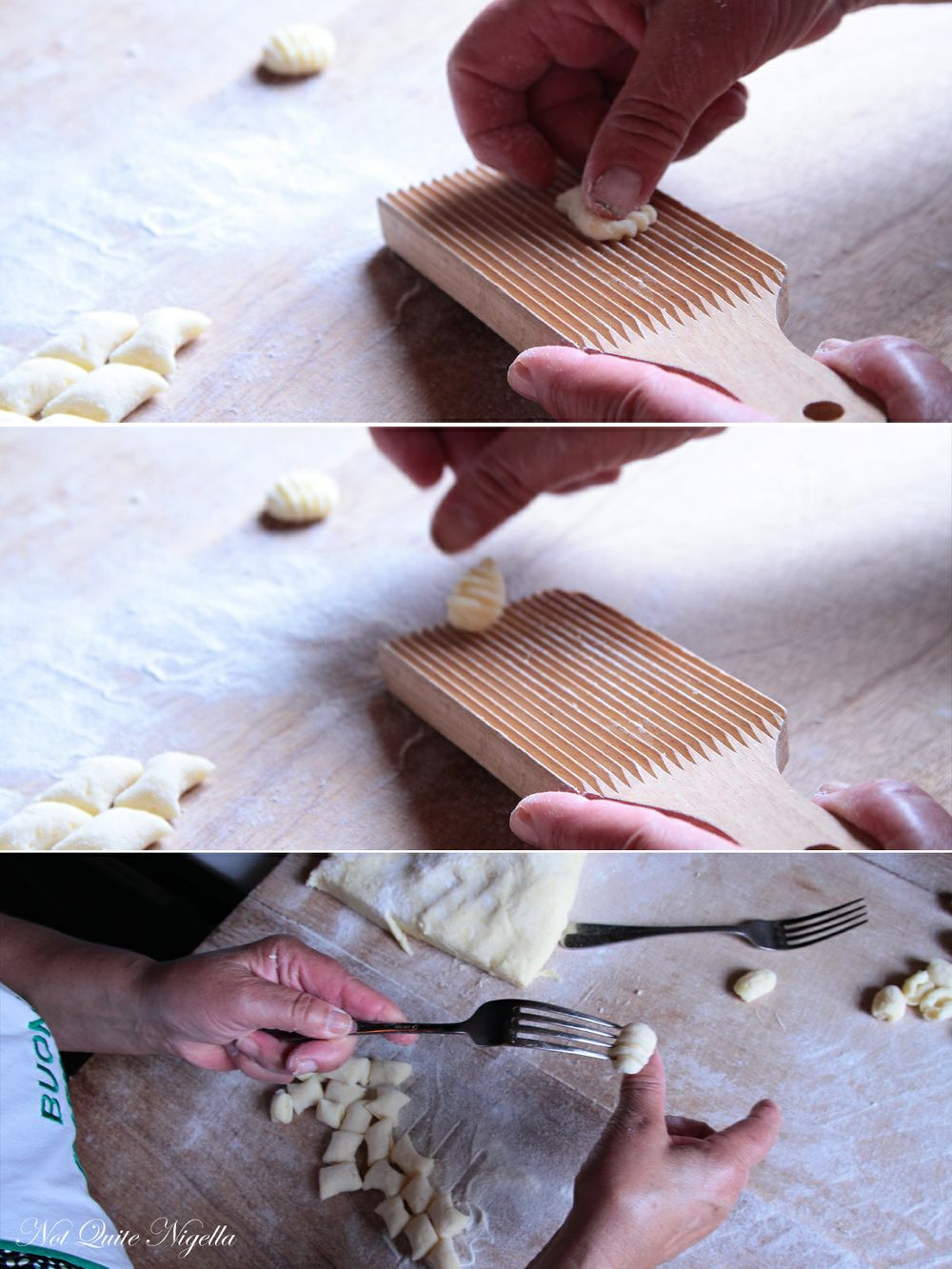 Top: pressing down firmly on the board; middle flipping the pieces; bottom, Francesca's advanced moves using a fork on her thumb! 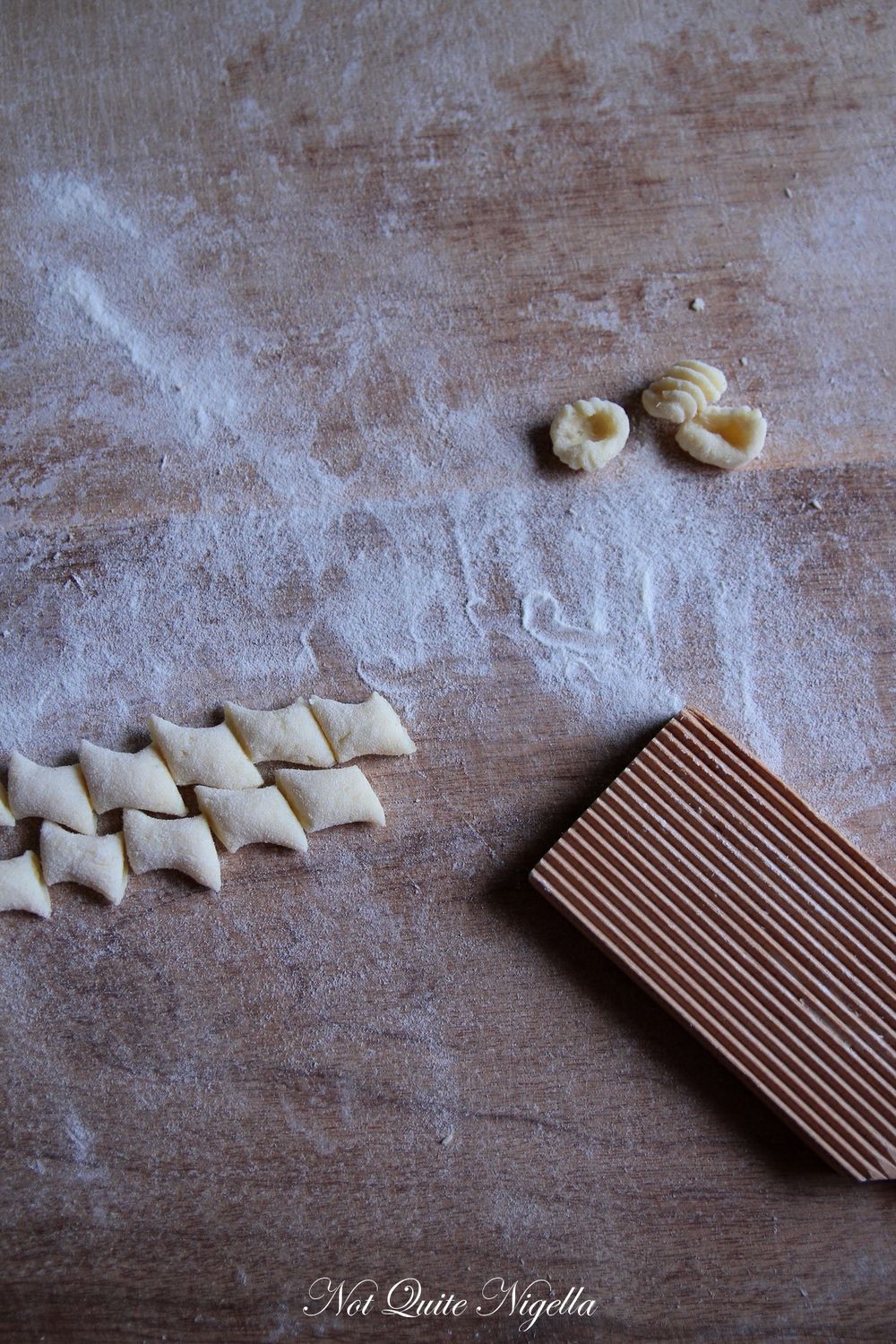 Step 4 - Start to heat your sauce in a separate pan. Place the gnocchi in the boiling water and they're done once they float to the surface. Remove with a slotted spoon and place in the sauce and bathe the gnocchi in sauce and serve immediately. You can also place the cooked gnocchi in a lightly oiled baking dish and toss so that they don't stick together. 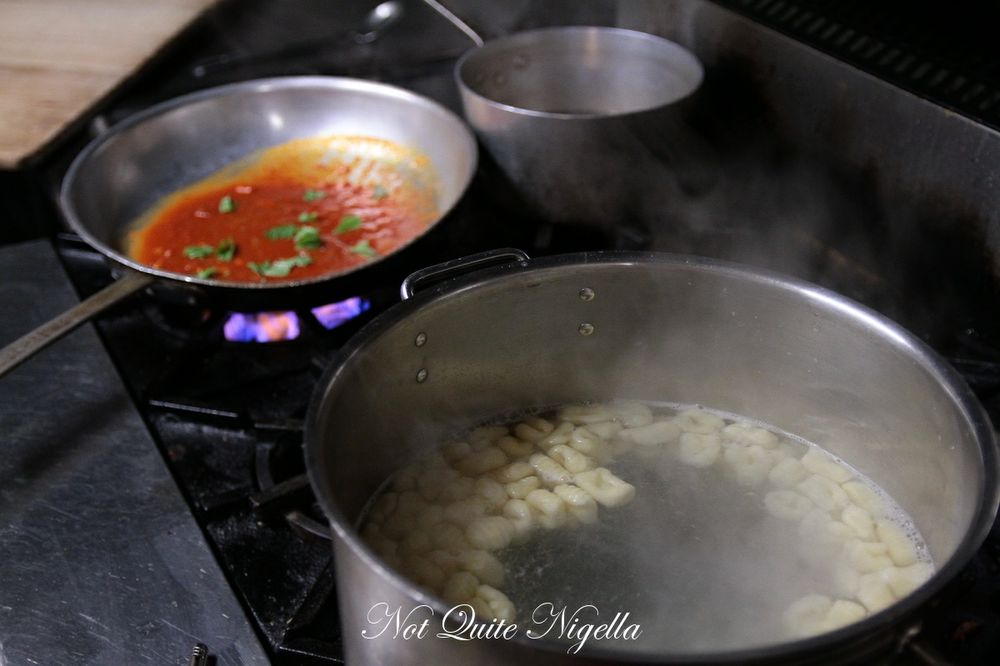 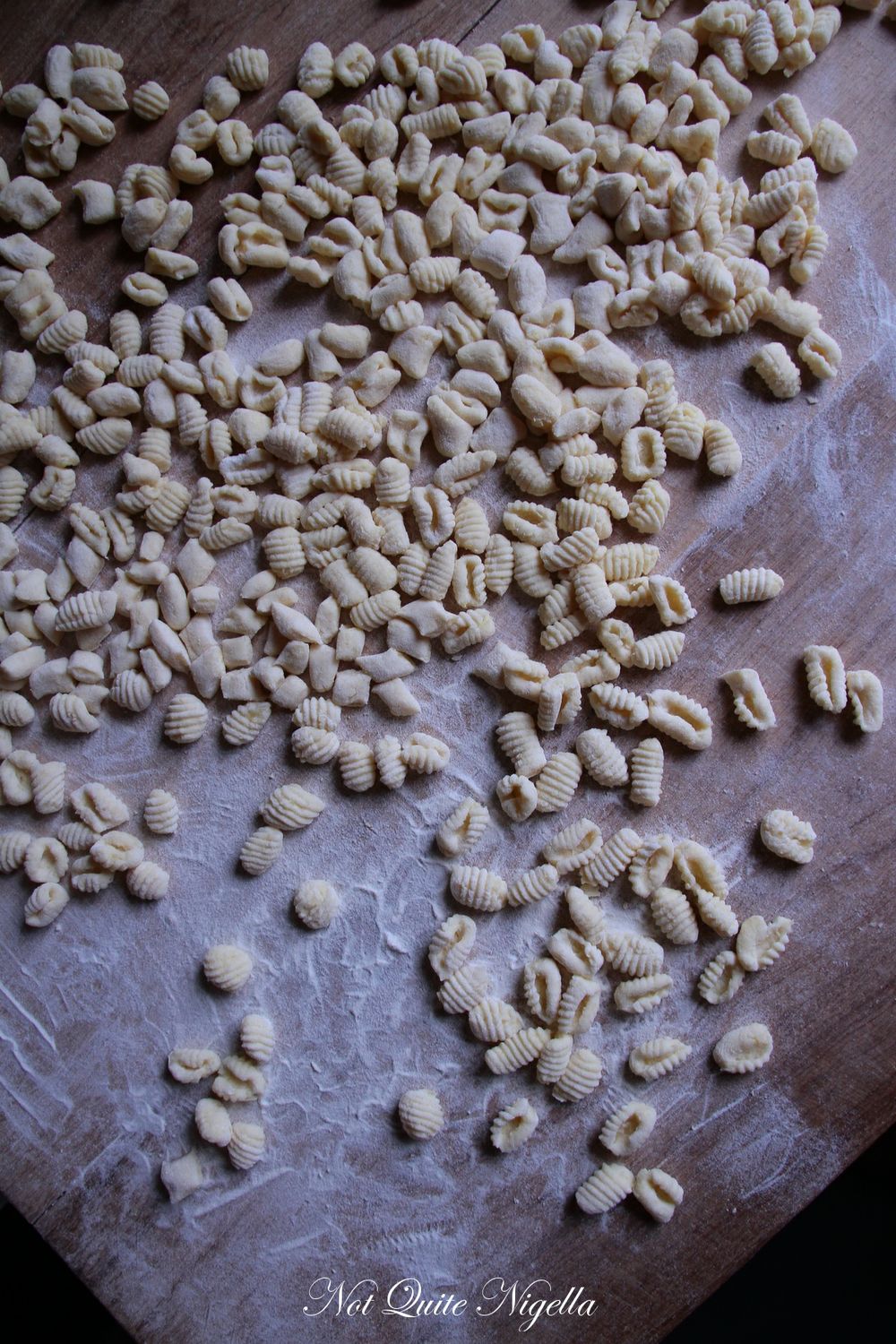