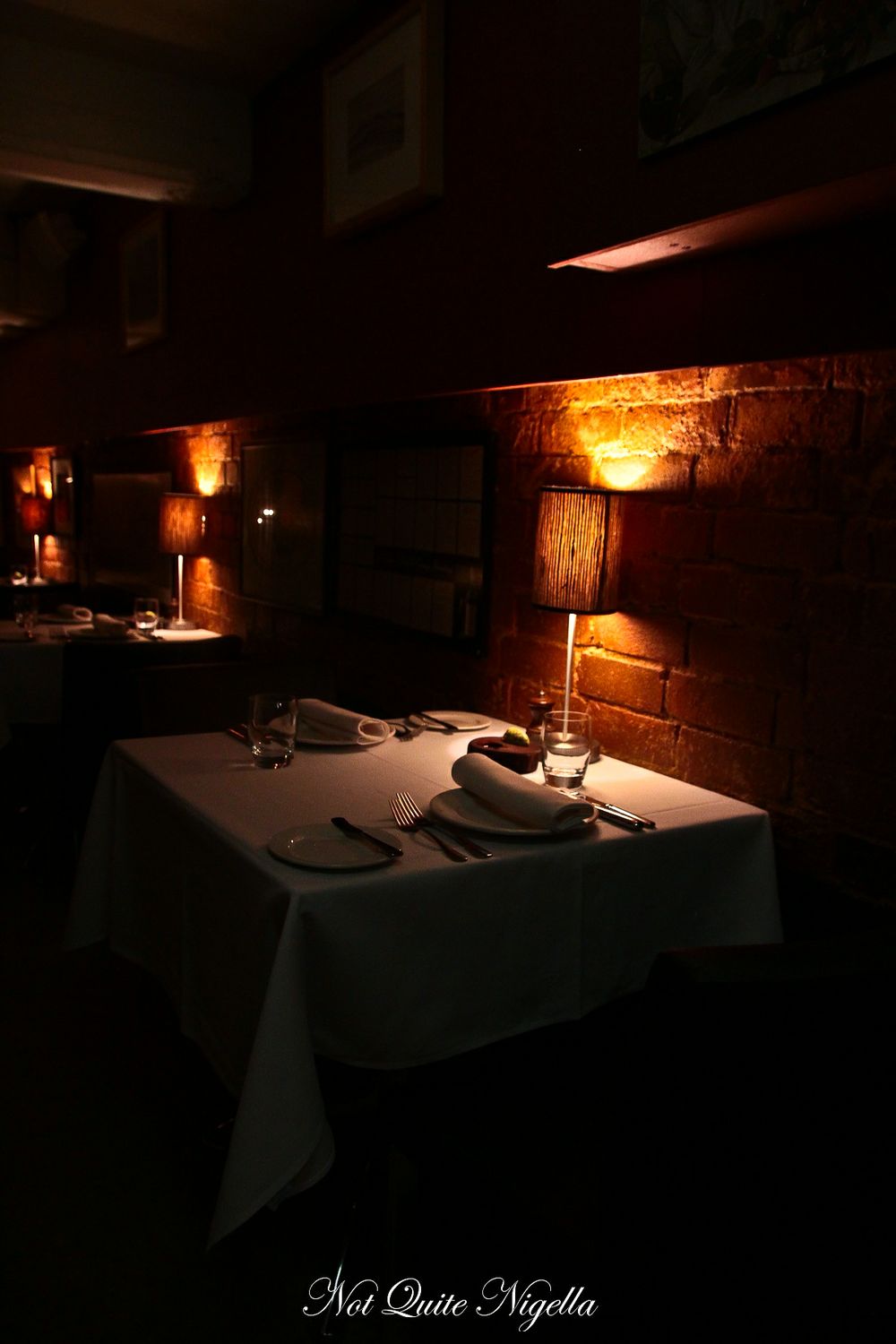 I once worked with a man who was distinctly odd and very prickly. Paranoid, obsessive and angry were the first three words I'd use to describe him. I called him Voldemort because he was a little bit crazy and to add to everything, he actually loved being called Voldemort. One day we were invited to lunch by one of our suppliers and the restaurant was in a cellar. He was terrified of it whilst the rest of us loved the intimate, unique atmosphere. I decided that that was the thing that made him craziest.

So when I heard that Stefano's flagship restaurant was housed in a cellar, I knew it would be atmospheric and romantic (hmmm, perhaps it was Voldemort's fear of the romantic or intimate). Celebrity chef Stefano de Pieri has handed over the reins to Jim McDougall, a Mildura born chef who has worked with Shannon Bennett at Vue de Monde and who has returned to his roots back in Mildura. Jim's food is very different from Stefano's rustic Italian cuisine and the cookbook Nuovo Mondo (or_ New World_) demonstrates this with Stefano's recipes on one page and Jim's modern interpretations on another. For dinner, there is a choice of a six or eight course dining menu, the latter being the signature experience and each can be matched to wines. 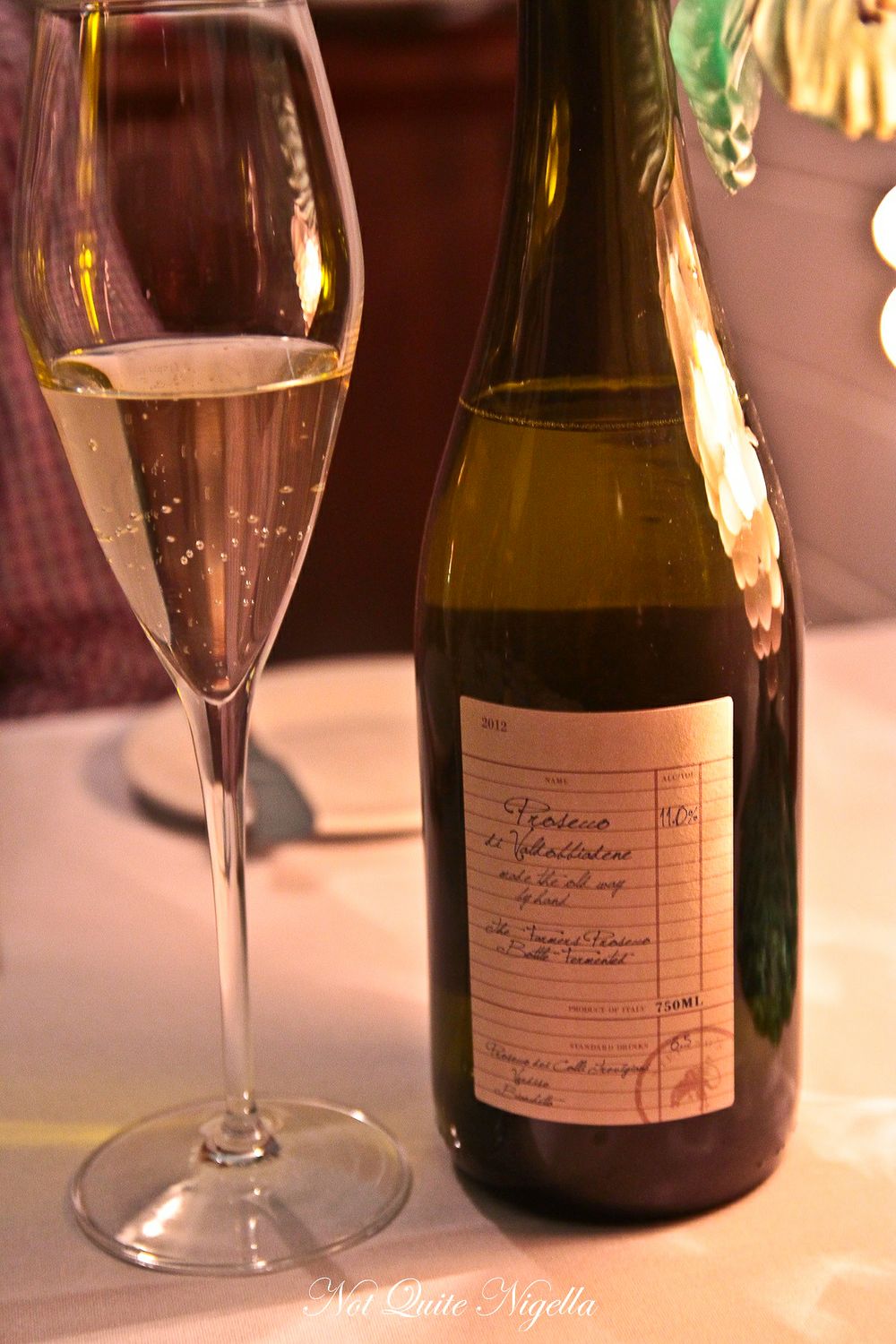 The cellar is moodily lit with exposed brick walls and plenty of tables for two. It came about as a combined vision of Stefano and his father in law Don Carrazza who owns the Grand Hotel. Until 1988, the liquor licensing laws started by the Chaffey brothers for Mildura meant that the only place that could serve or sell alcohol was the Grand Hotel. As a result, they needed a huge storage area for the bottles and they used the cellars for this along with the theatre next door. Stefano points out an absence of pubs and clubs in Mildura because of this rule. 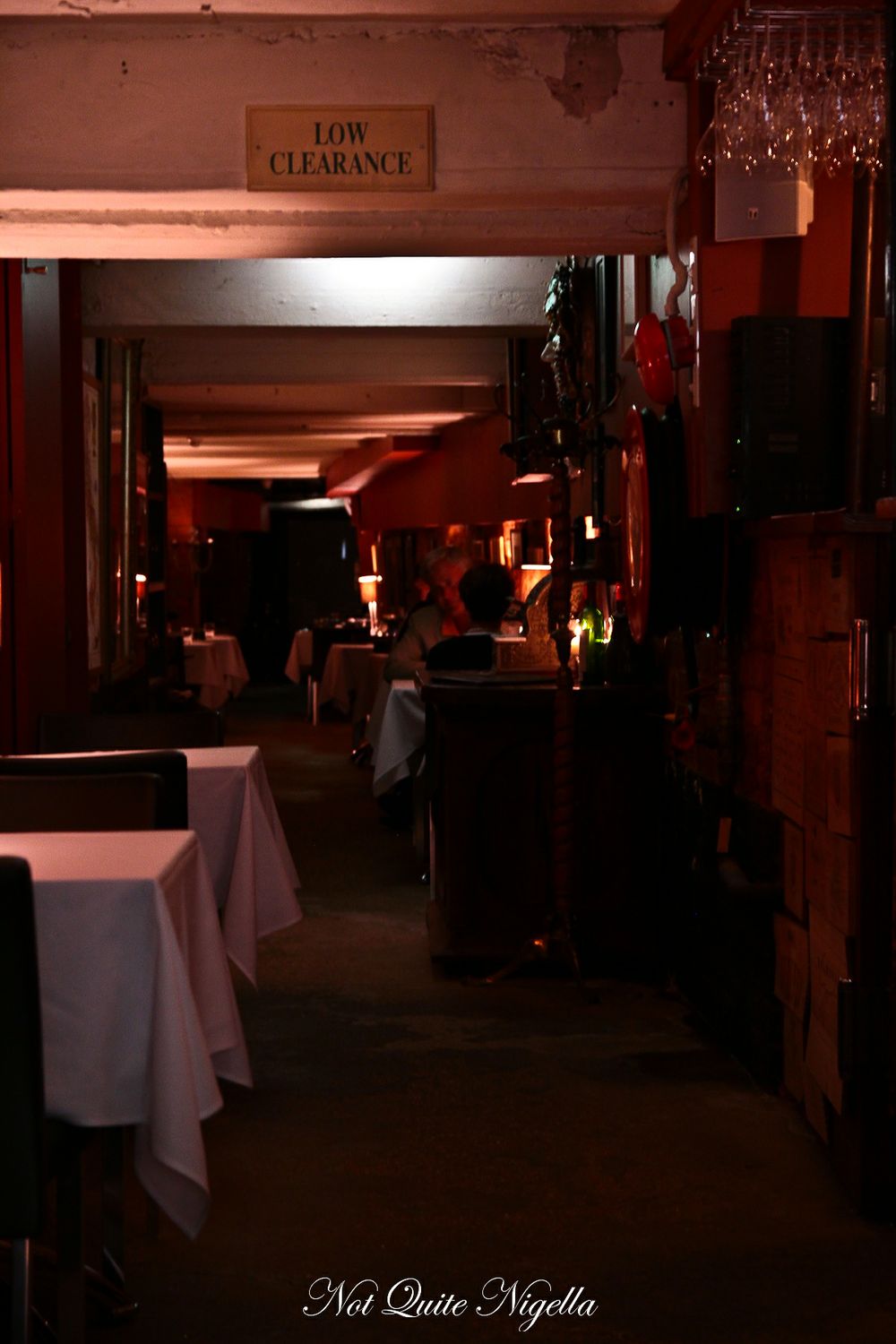 Patrons can also ask to see the red and white wine cellars housed in labyrinthine glory past the bottle capping machine and Stefano's favourite art works. Stefano himself is dining in the restaurant alongside some guests that accompanied him on a tour of Italy. He comes in and out between courses to talk to us. 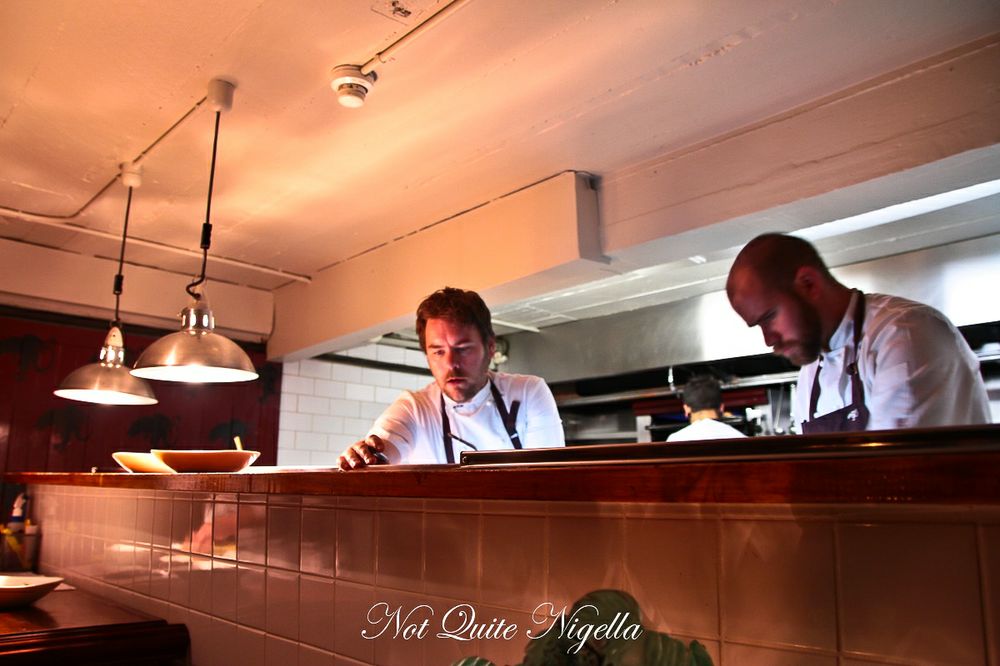 The most sought after table in the restaurant is the "Kitchen Table" which can seat up to four people, directly near the open kitchen and it affords diners the chance to overhear any chef-speak. The chefs also bring out some of the courses themselves. We overhear things like "Delicate! No sausage fingers!" from Chef Jim and a "Oui chef!" in response. 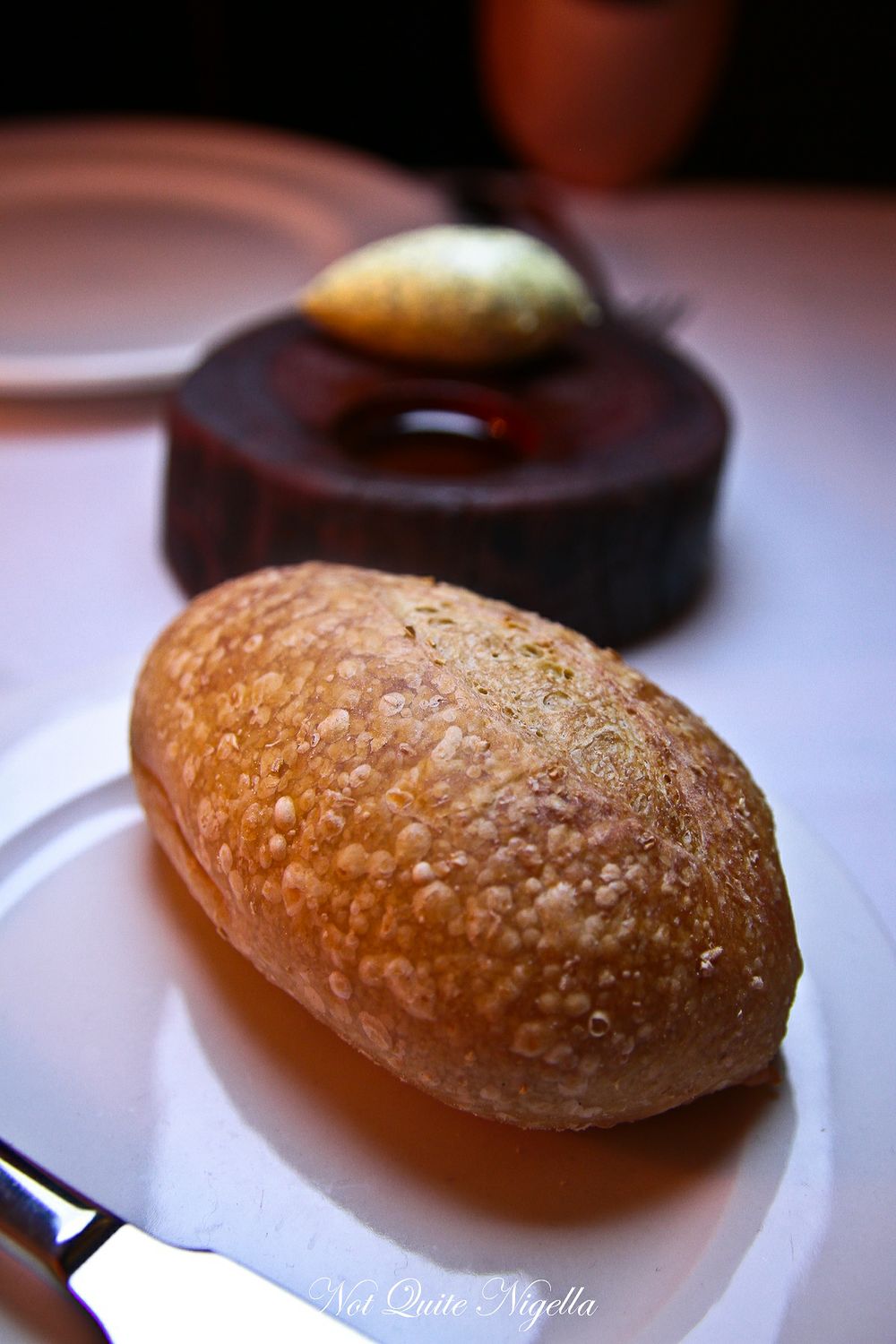 We start with bread, a choice of three types, a rye made with malt from their brewery, a grain sourdough and a white sourdough which are served crusty and warm with a homemade whipped butter flavoured with saltbush leaves or an olive oil. The saltbush gives it an umami quality, much like Vegemite or miso paste. 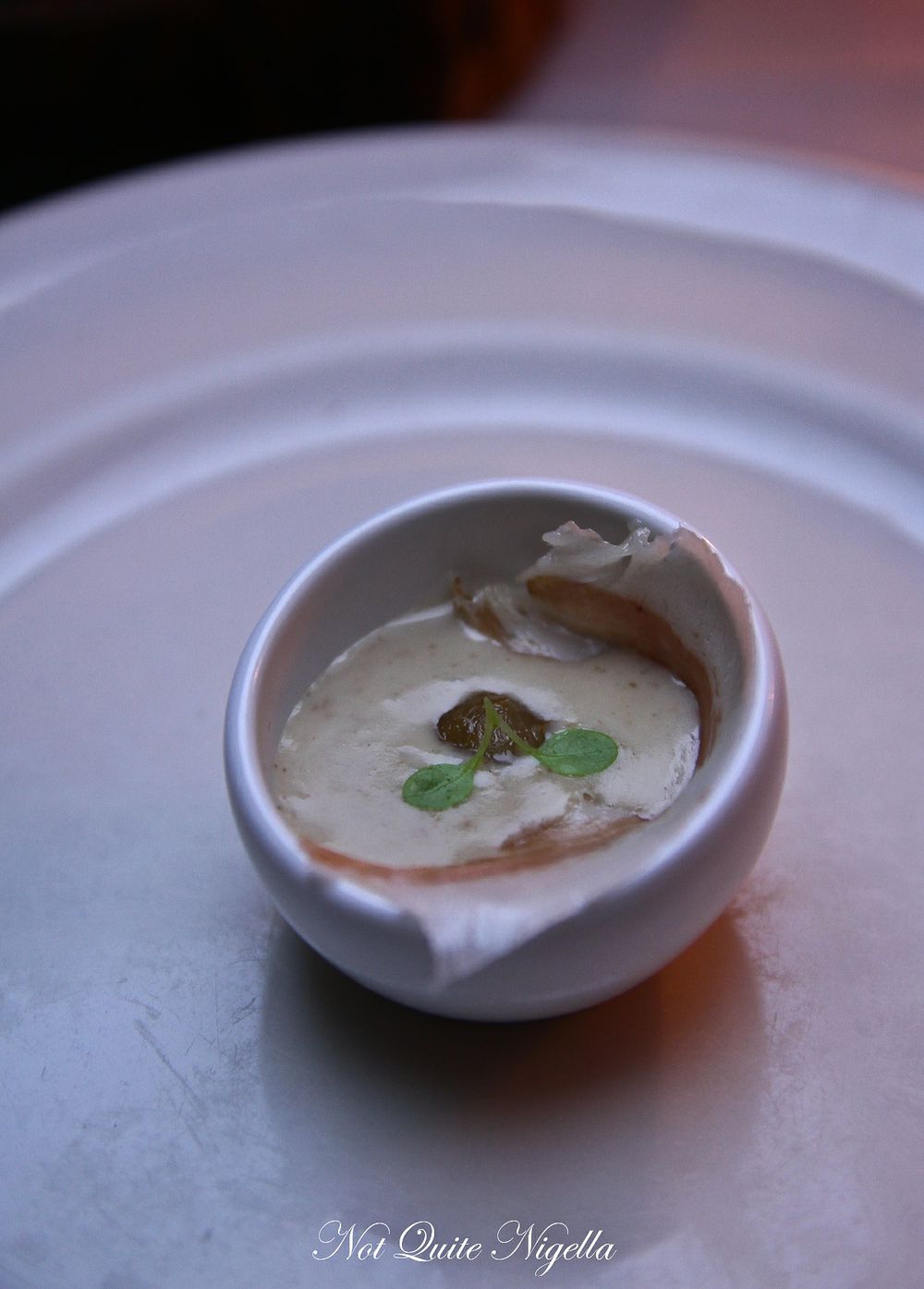 The first tastes come out from the kitchen and the amuse bouche is a fetching set of three. The eight courses don't take into account the many extra courses and these do the job of whetting our appetites nicely. We start with the white almond gazpacho, grape and cured guanciale (pig's cheek), the gazpacho creamy and luscious and balanced against the fatty, paper thin guanciale. 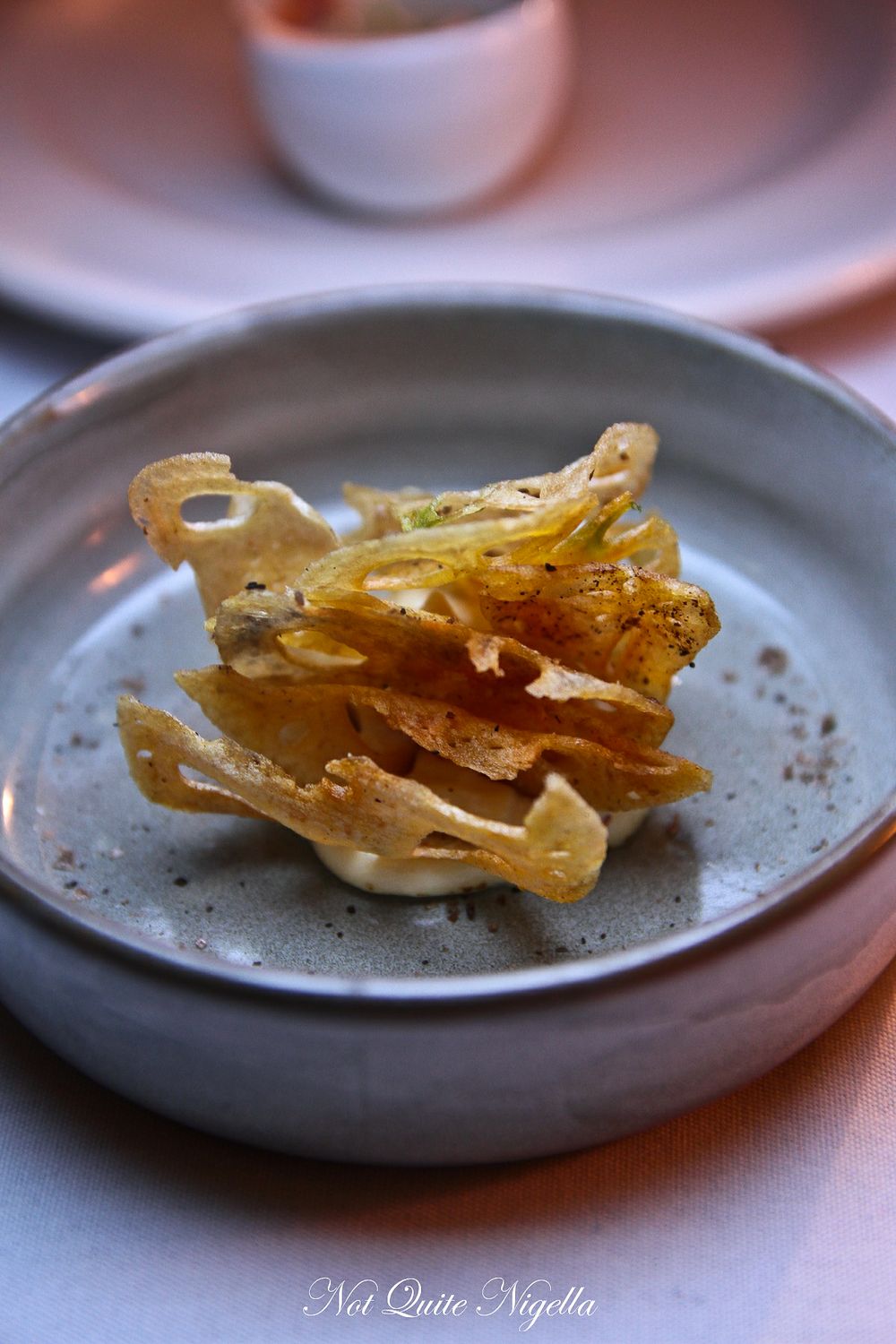 I adore lotus chips for their crunch and texture and these are paired with a thick, rich and creamy cashew puree. This is why you want to keep some bread and that's for mopping up. 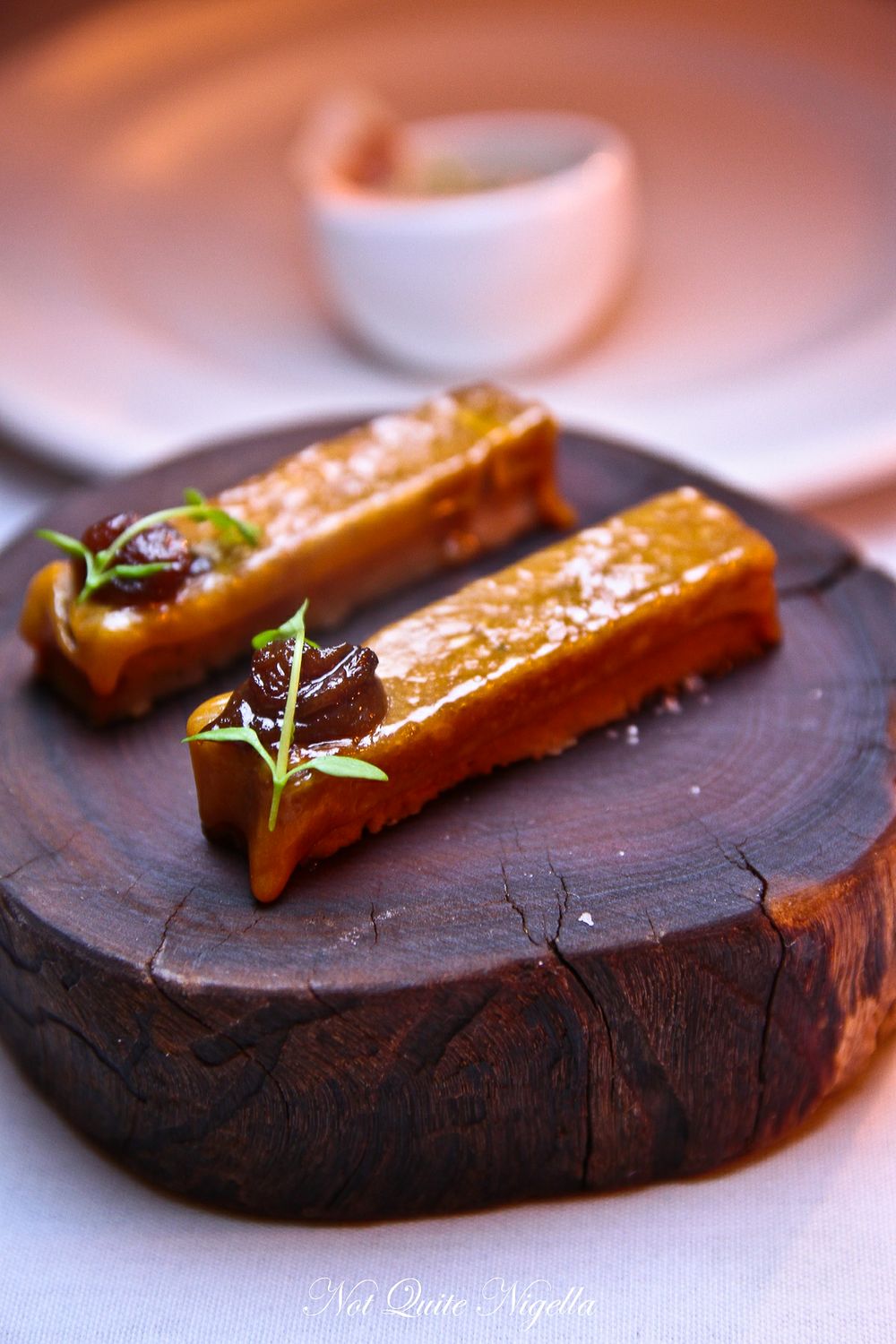 At first, I thought they looked like slender French cakes in miniature. The soft, slow cooked pork is topped with a thin coat of caramel and a pickled local sultana. 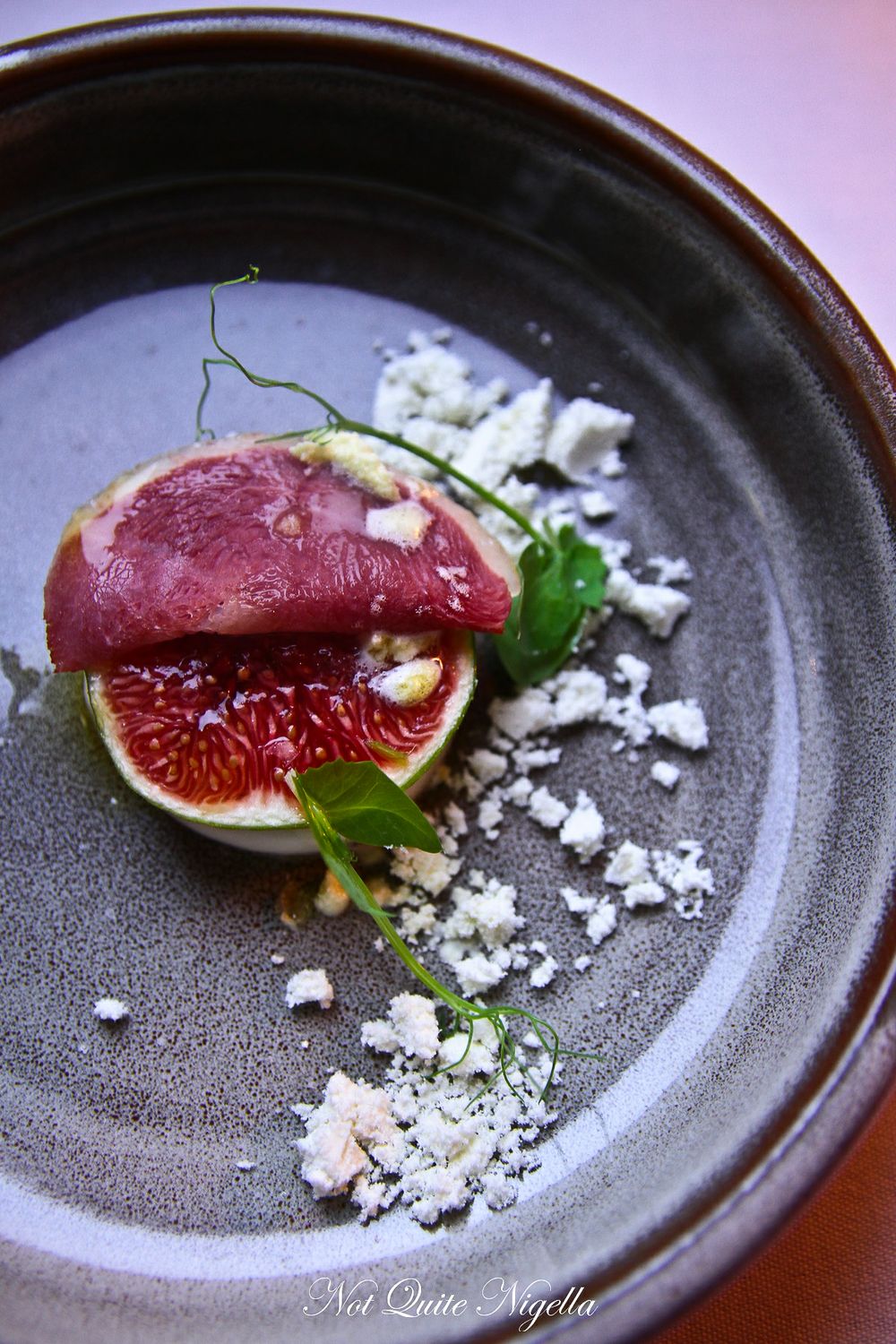 Jim brings out this dish and he tells us that the figs are from farmer Gino Garreffa from one single fig tree that exclusively supplies the restaurant. Gino is able to pick the figs when they are of perfect ripeness and the consistency of these figs is so luscious and jam like that it looks like it has been glazed but it has only been sliced. It sits on a layer of whipped soy creme peeking out from a layer of paper thin duck ham. The ducks are from Pavinga near Loxton in South Australia and the duck is brined and poached rather than dry cured. To the right is a snowy sprinkle of olive oil and matodextrin dust combined and it is seasoned with Murray River salt and decorated with pea tendrils. The fig is the star though, it's lusciously, jellied centre sweet and bringing together all of the elements. 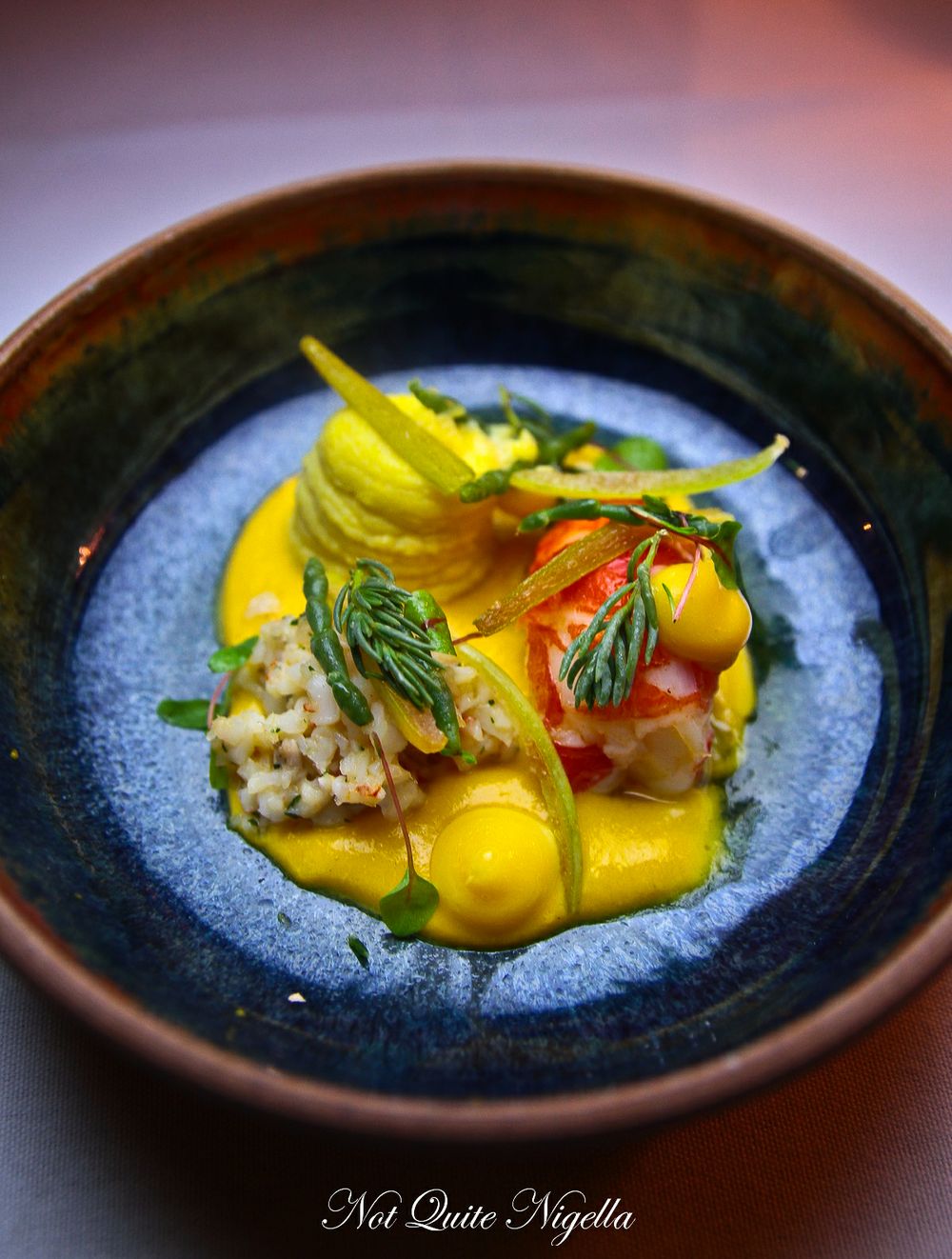 This was the first "official" course from the menu. When he set this plate down, Jim said that there would be no seafood on the menu this evening, only river food from the nearby Murray River. This dish was made with wild yabby gently poached with sweet, rich corn puree and a duck egg yolk based thick emulsion at the bottom. A tangy yuzu curd and yuzu dressing was sprayed on top before serving. Foraged sea herbs like samphire, pig face and ruby saltbush decorated it prettily as well as adding saltiness to this sweet-ish dish. 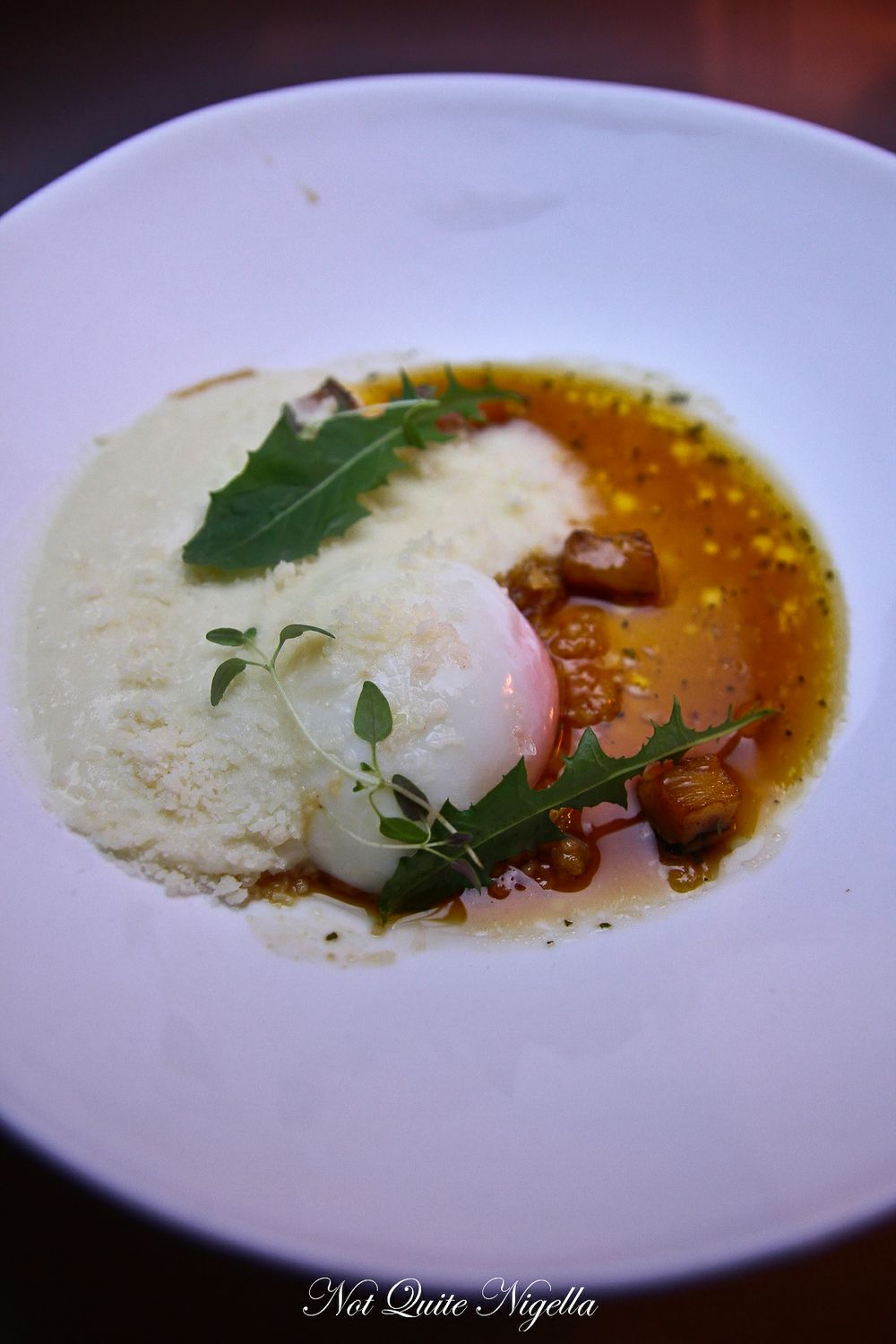 "This is a little egg dish" Jim says as he sets it down. He gets boxes of free range eggs from a farm in Woorlong near Red Cliffs and he uses the eggs in pasta and to make dishes like this. The egg was cooked at 64C/147.2F for one hour and is served with tiny pieces of crispy chicken skin, roasted salsify and parsnip puree and decorated with wild dandelion and Australian thyme which tastes the same as regular French thyme but without the woody stem being soft instead. The sauce is acidulated with brown butter and vinegar. 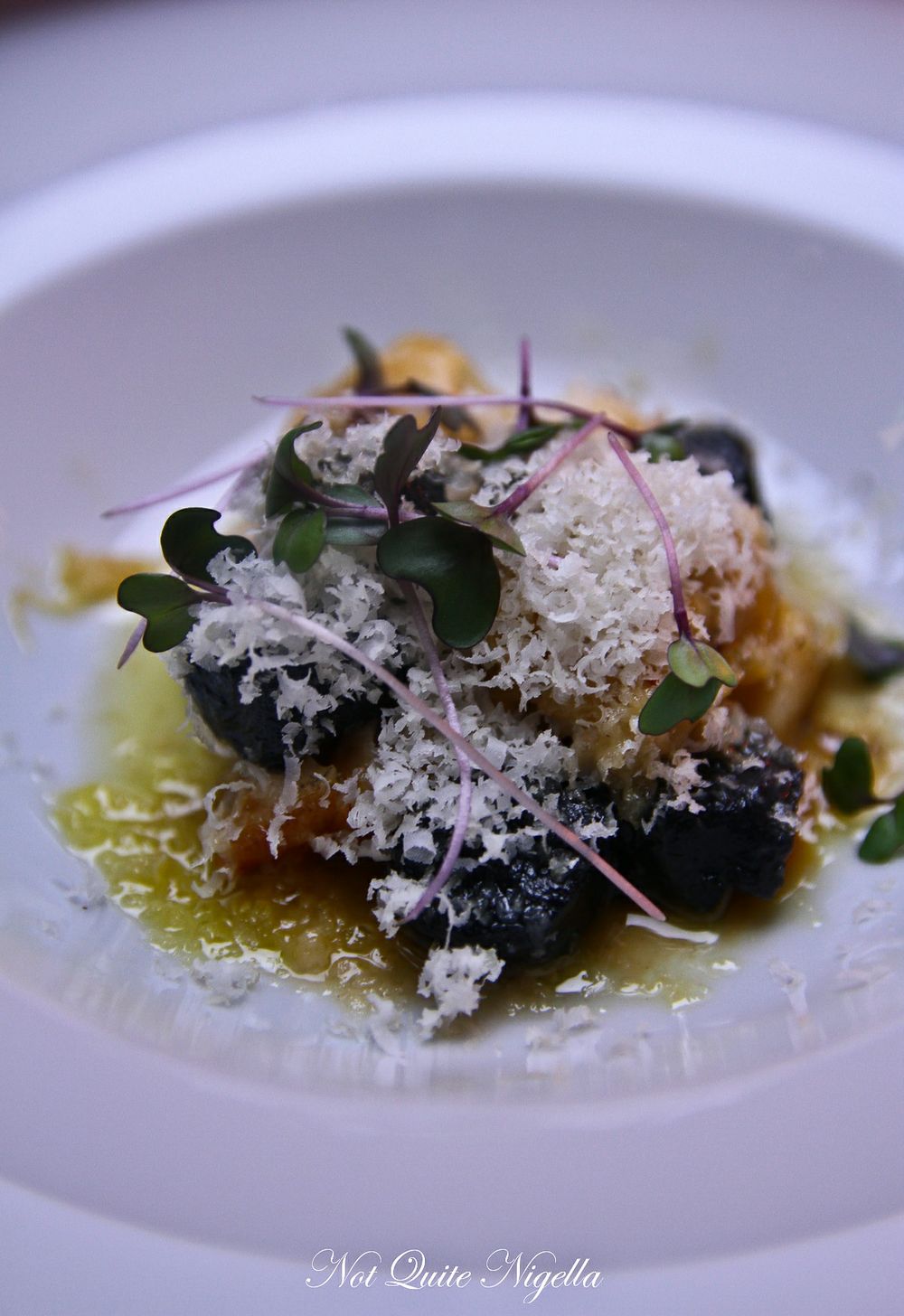 This was my favourite dish of the night. And if I thought that I made a light gnocchi, it was nothing on theirs here. Over the counter I ask Jim his secret to the squid ink gnocchi and he tells us that it is a wet mixture made of potato and it is piped straight from the piping bag into barely simmering water. The result is the lightest gnocchi combined with soft cubes of fish and the savoury aromatic combination of brown butter and miso. On top is not grated reggiano but macadamia, finely grated on a microplane. 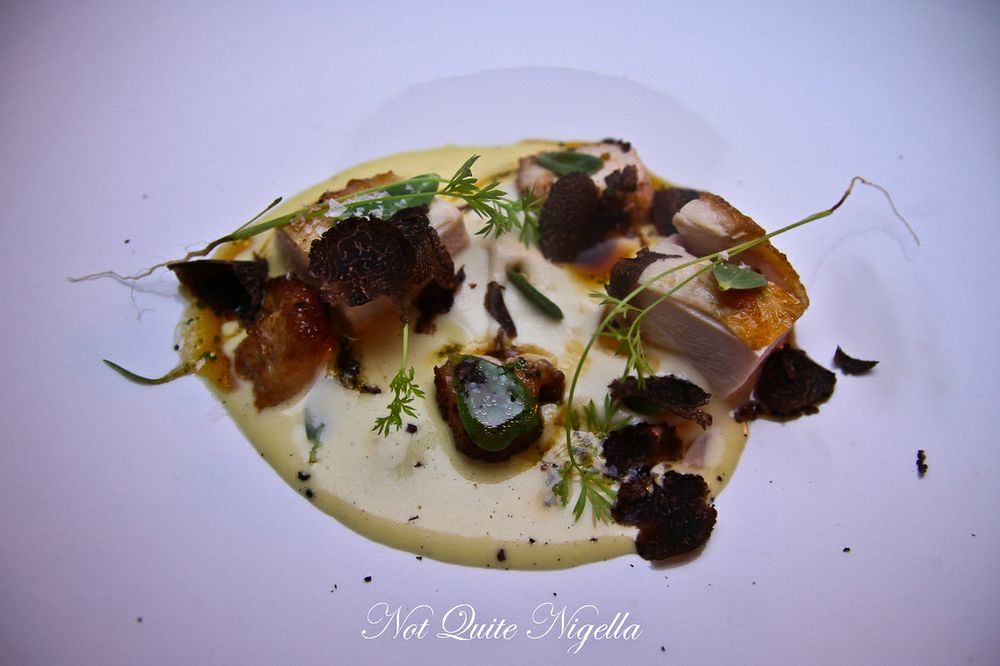 The second last savoury dish was the roasted Glenloth chicken breast and thigh on a mousse served with a cauliflower puree, small pillows of lamb sweetbreads, vanilla sauce, wild purslane and browned chicken jus. And the tiny little thing on top? It's a tiny carrot, about 4-6 weeks old with the flavour so intense that it is hard to believe something that tiny can taste so much of carrot. The chicken is tender and the cauliflower puree and vanilla aroma are creamy and aromatic but it is never too vanilla-ey. The carrot, in its tiny existence gives the dish an intense, short burst of carrot flavour, hard as it might be to catch the tiny tendril in your teeth. There were two wines for this course offered so that diners could see which one they preferred. 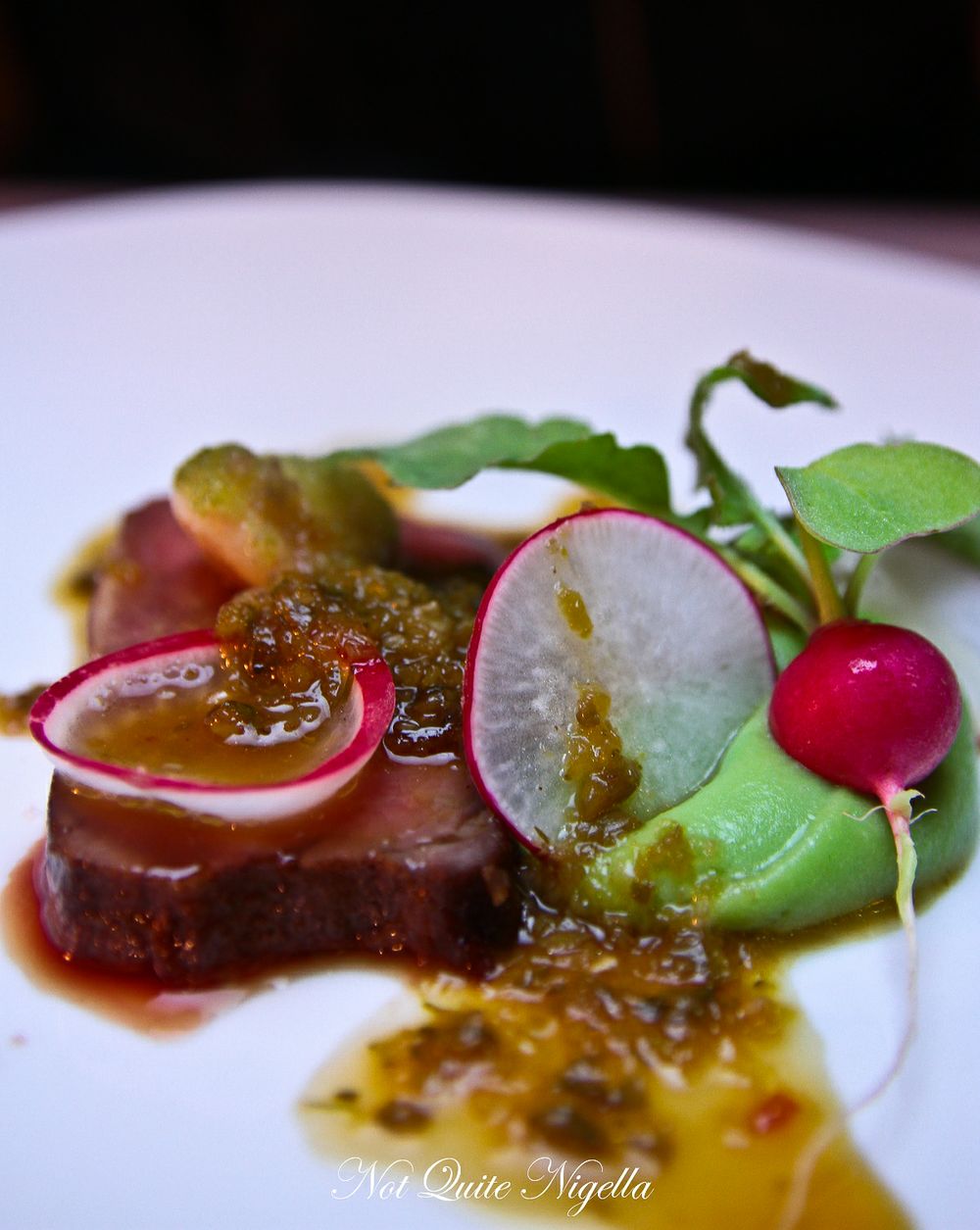 By now I was completely full while Mr NQN was quite comfortable (the perils of wearing a tight dress and a belt). The four week dry aged beef was slow cooked and smoked with a layer of cured beef on top, in their version of a bresaola. The stinging nettle and potato puree, bone marrow and radish were very rich and I could only manage a few mouthfuls of this dish. It was a bit too rich for me at this stage of the meal. 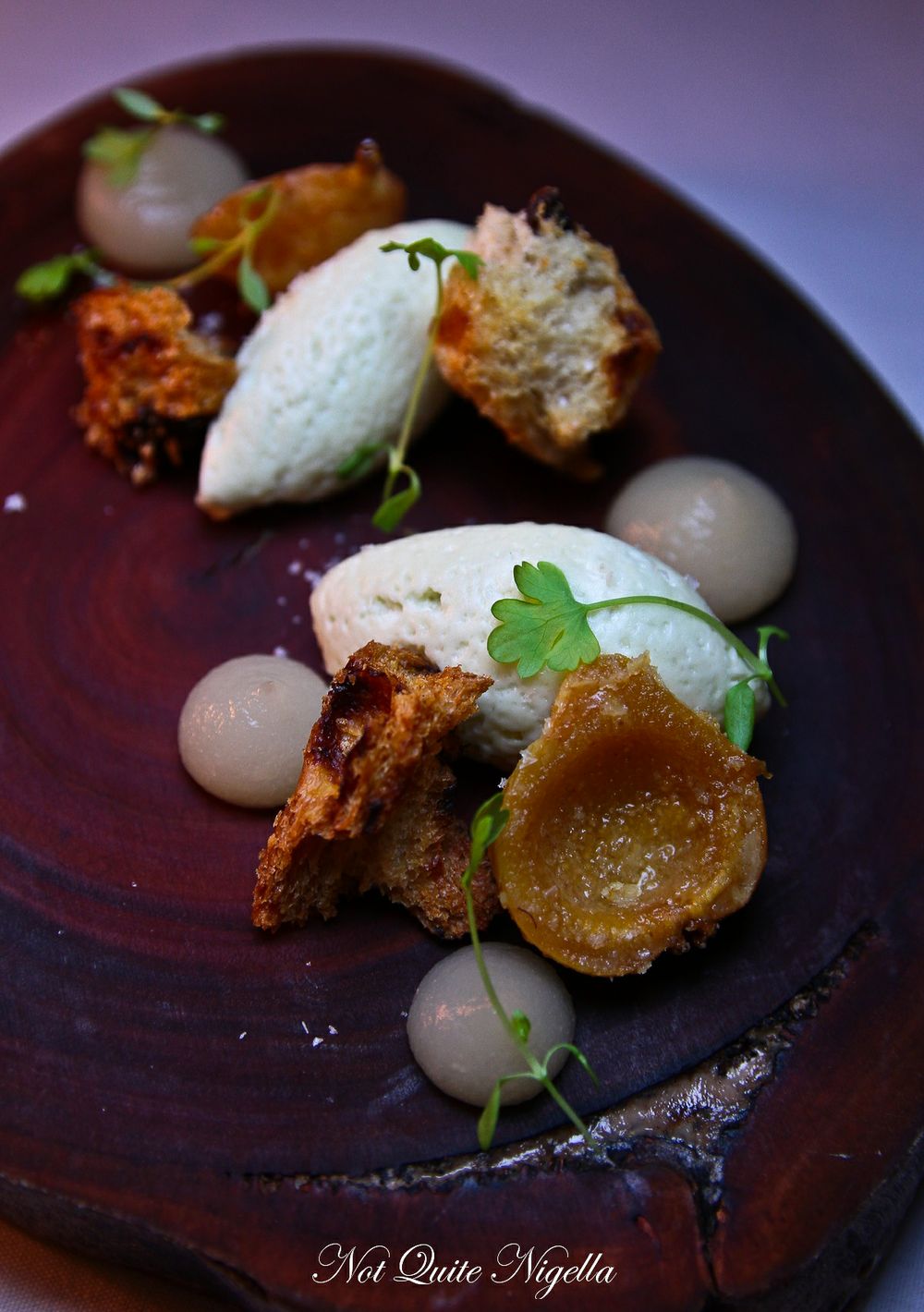 The cheese course was a shared course brought out on a thick wooden board. It consisted of two quenelles of whipped gorgonzola, pear puree, a halved baby pear (also from farmer Sam that supplies Jim with the mini carrots) and house made lavosh. The gorgonzola and pear are a match made in heaven, the gorgonzola so light and moussey and the pear which is caramelised and crusted in sugar gives the plate additional crunch. 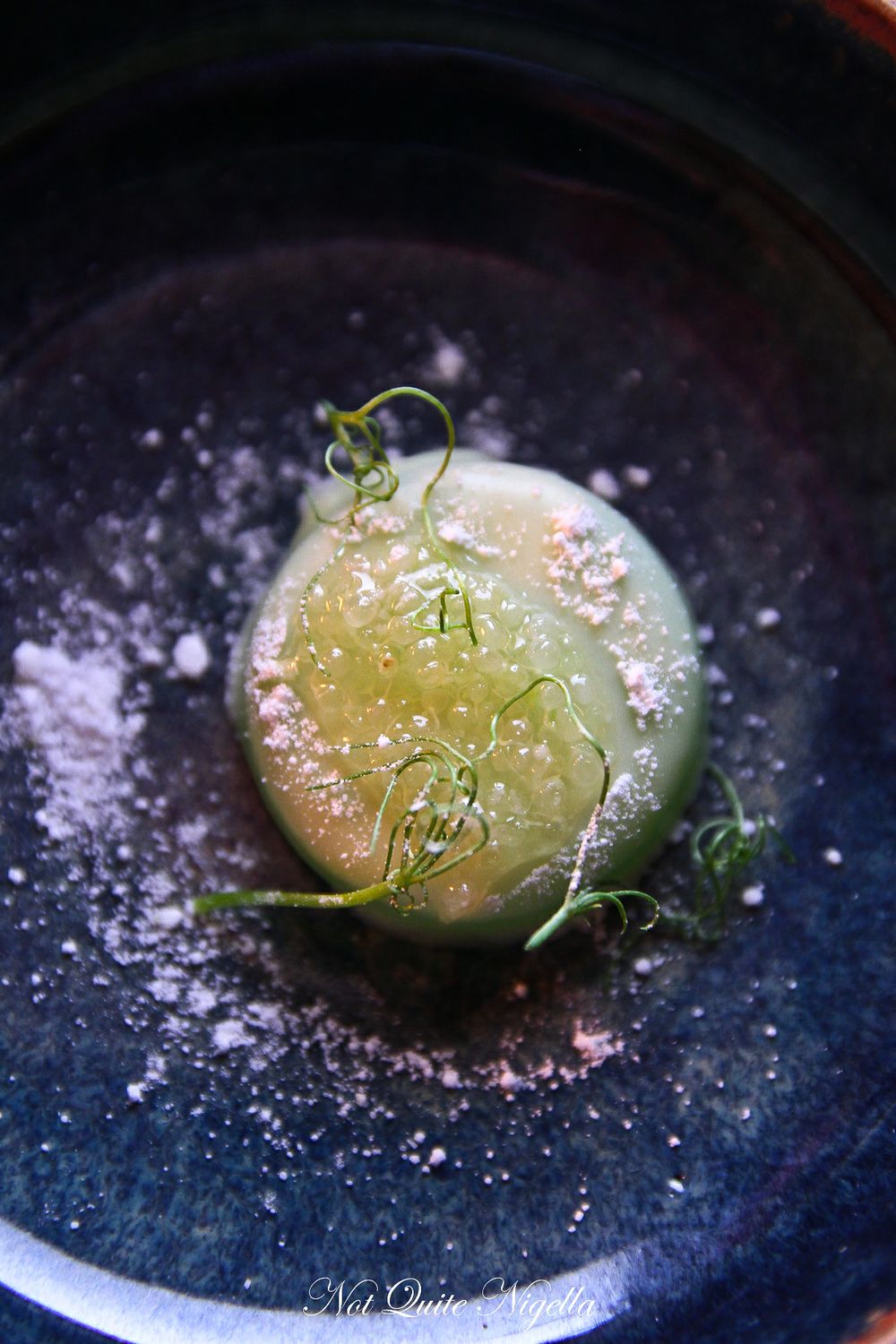 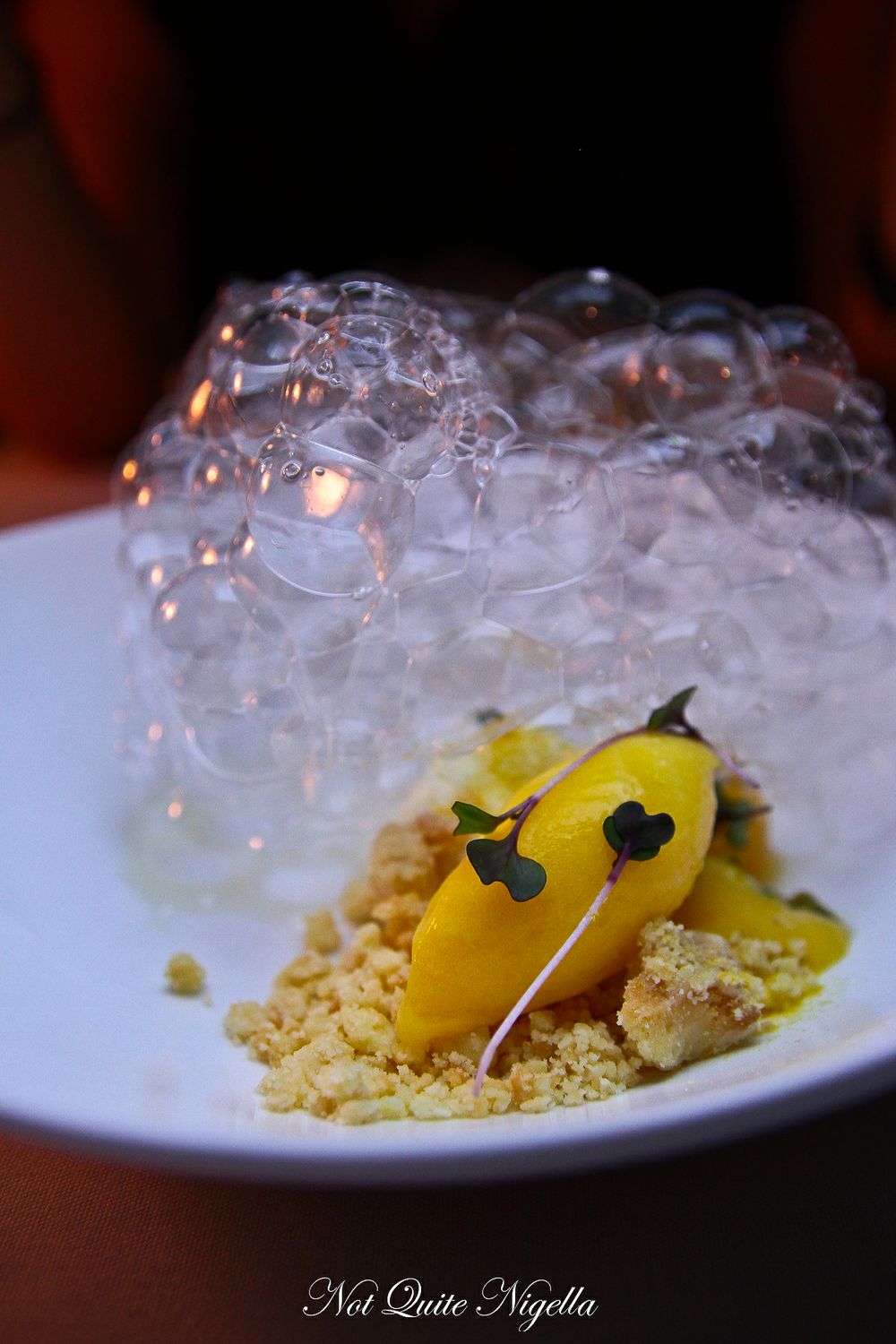 Brought out by his sous chef Ryan Locke, this was similar to a deconstructed cheesecake, with the fruity elements from the mango and passionfruit, crumbs of buttery shortbread and a vanillaey cream cheese mousse. There were large passionfruit bubbles to the side of the plate and these were surprisingly not very strong in passionfruit (we both thought that it might be strong). The combination of textures was excellent. 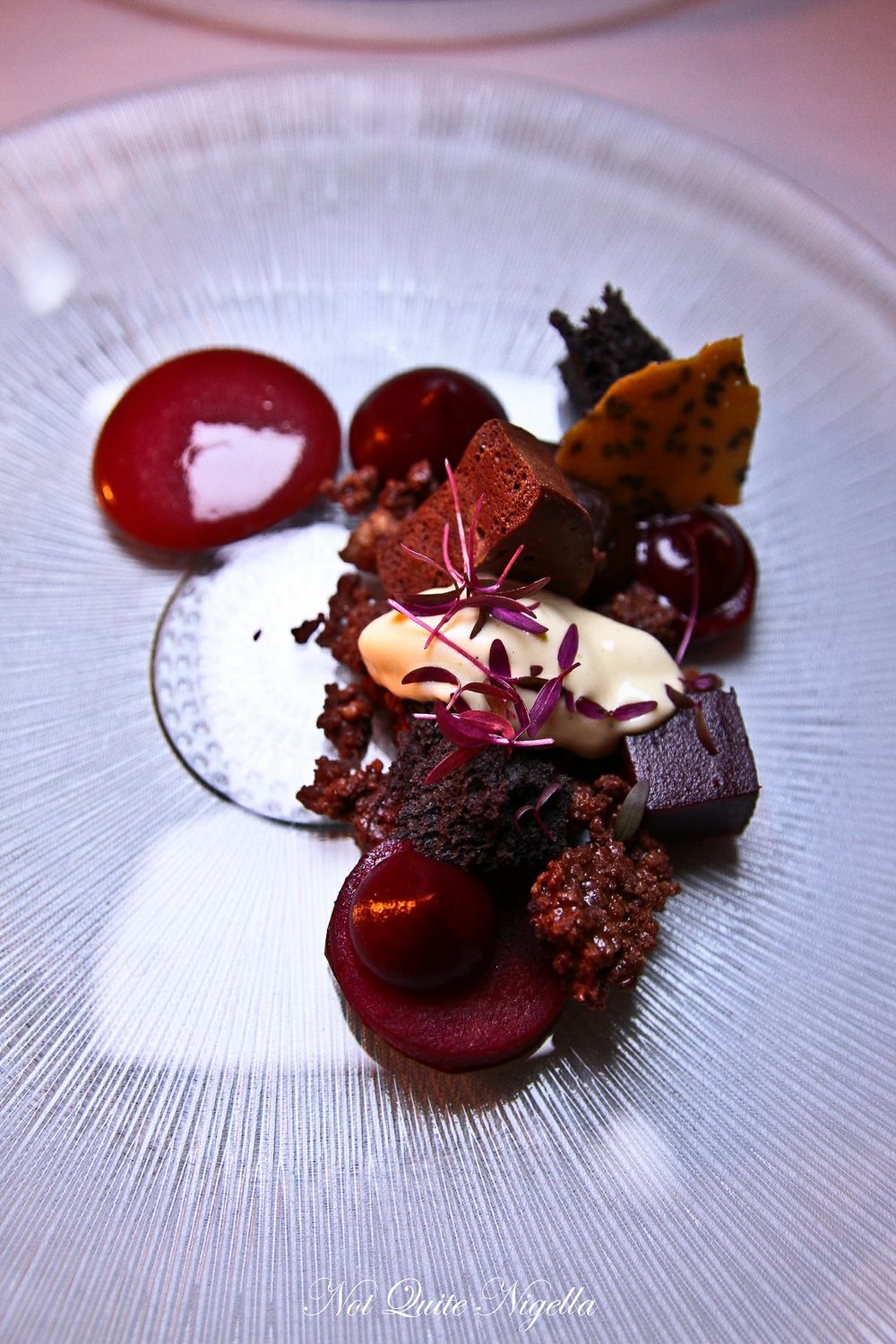 Although chocolate isn't mentioned, this is primarily a chocolate course with blood plums and a little black sesame. The plums in this dish are from Jim's father's property and in this dish, there is a plum puree and jelly. There was an aerated chocolate cake sponge, a firmer, thick chocolate cake and crunchy chocolatey crumbs with honey ice cream and plum puree which was added at the table. 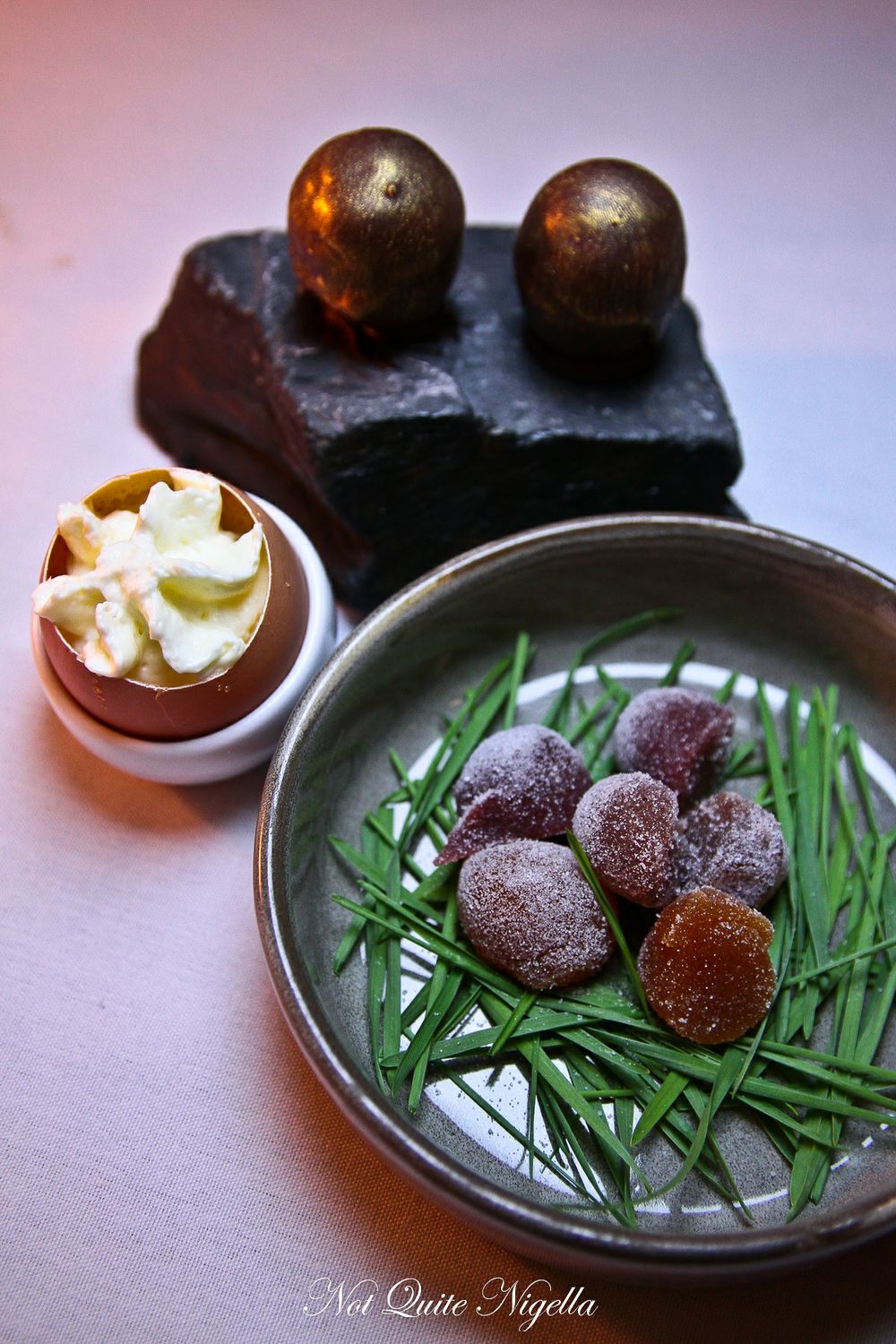 The very final course is the petit fours and the advantage of sitting at the kitchen tables is being able to see what is coming up. We'd seen plates of these chocolate covered gold dusted items and wondered what they were. It was a tiramisu filled chocolate ball with a shot of marsala and diners are advised to eat this fluffy light ball in one swift mouthful to get all of the flavours at once.

There is also a bowl of Mildura fruit jubes in flavours such as apricot, fig and blood plum, which are tangy but rolled in sugar. Alongside this is an egg shell holding in a double layer of saffron panna cotta and whipped yogurt foam. The saffron panna cotta, so strong in its prized ingredient represents the egg while the yogurt the egg white. 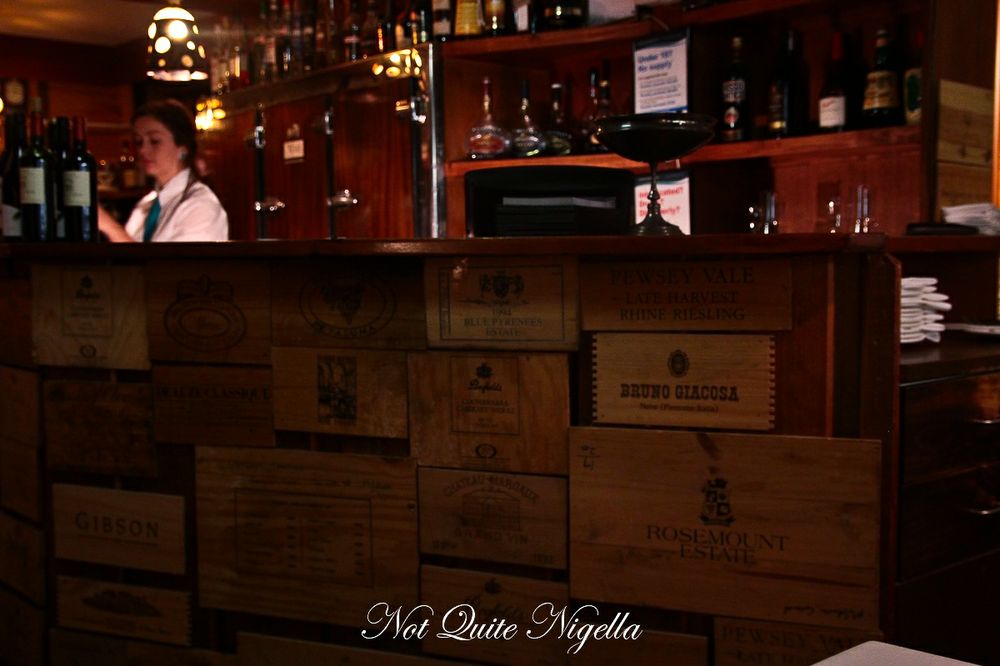 It's around 11:30pm by the time that we finish, resoundingly full for me and comfortably full for Mr NQN. Emerging from the cellar to the activity outside of a Saturday night makes us feel as if we've emerged from a magical underground journey. Which is probably not too far from the truth.

NQN and Mr NQN dined at Stefano's courtesy of Barilla

The eight course degustation is $135 per person or $220 per person with matched wine.