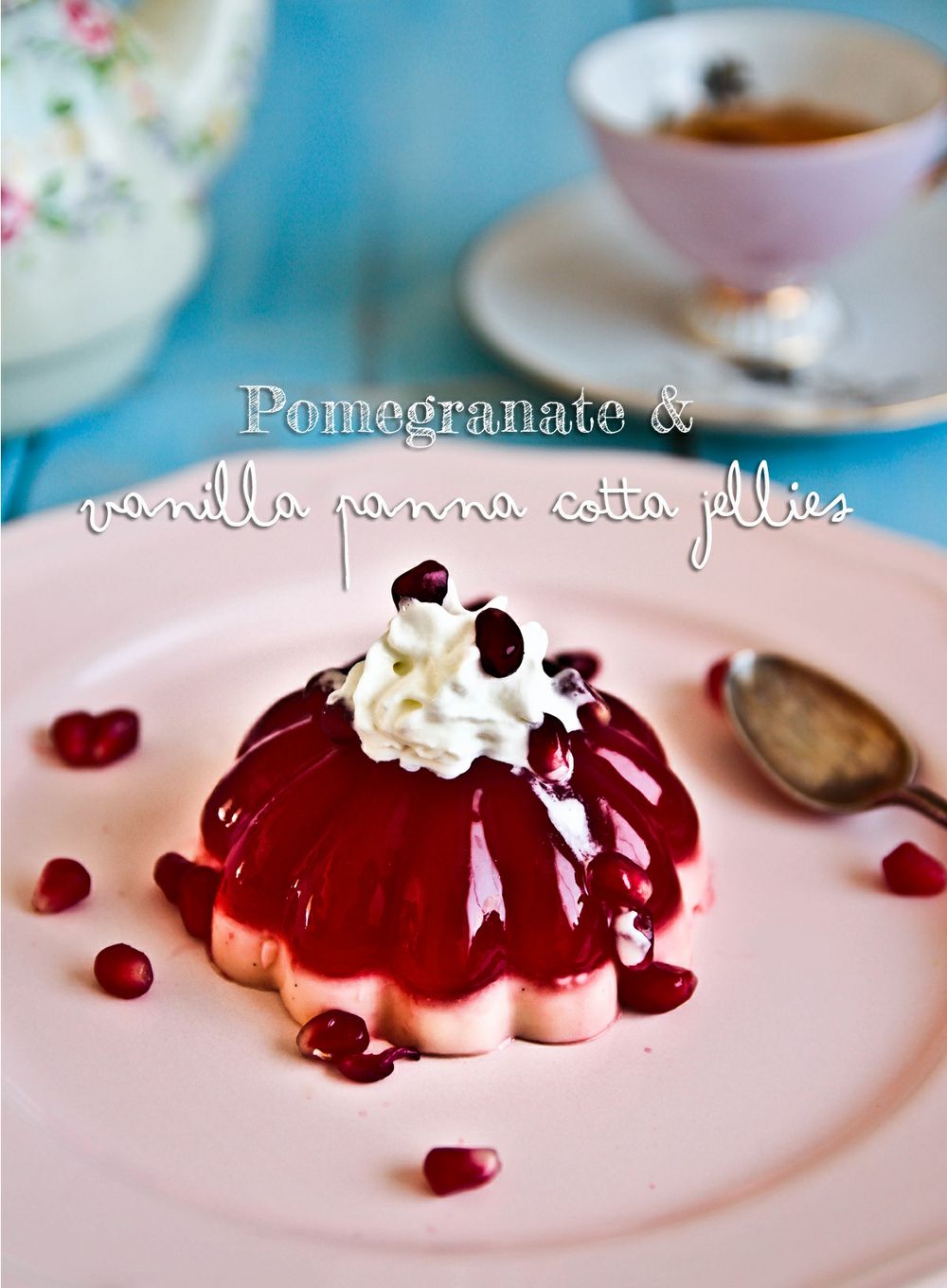 Do strange facts ever stick in your mind Dear Reader? A few years ago I was rather embarrassingly addicted to a television show about the girls that lived in the Playboy Mansion. There were three of them and they were Hugh Hefner's girlfriends. Despite the peculiar set up, I thought that the girls were charming and the lifestyle funny and fascinating (although for obvious reasons, the footage ended at a certain point!). 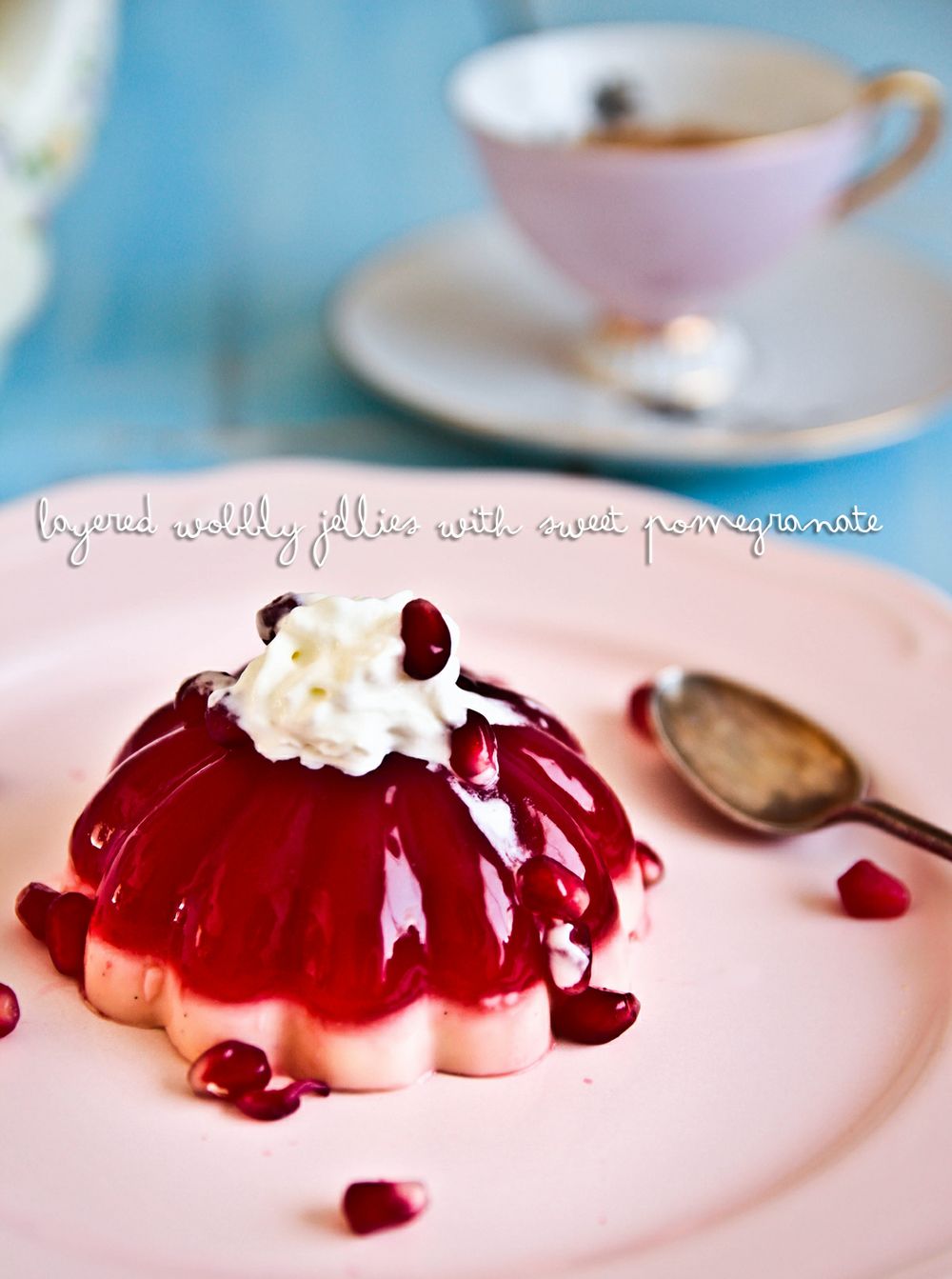 They would sometimes discuss Hugh Hefner's eating habits. He only ate traditional food and was to their frustration, absolutely adamant about it. But one curious thing that they mentioned was when he ordered a bowl of potato chips, a staff member would pick through them giving him only the most perfect, large chips. The girlfriend supposed that "Hef" had no idea that there were imperfect looking chips or little crumbs, that he thought that all chips were perfectly rounded and large. A friend who was watching it with me laughed and said that he probably thought the same about bosoms!

I don't know why I quite got onto the subject of the world's randiest octogenarian from these but these jellies are wobbly (like real boobs) and rather pretty. I was gifted two pomegranates by my friend Miss America who came over for dinner. He excused the odd gift but I was delighted as food gifts are always welcome here. 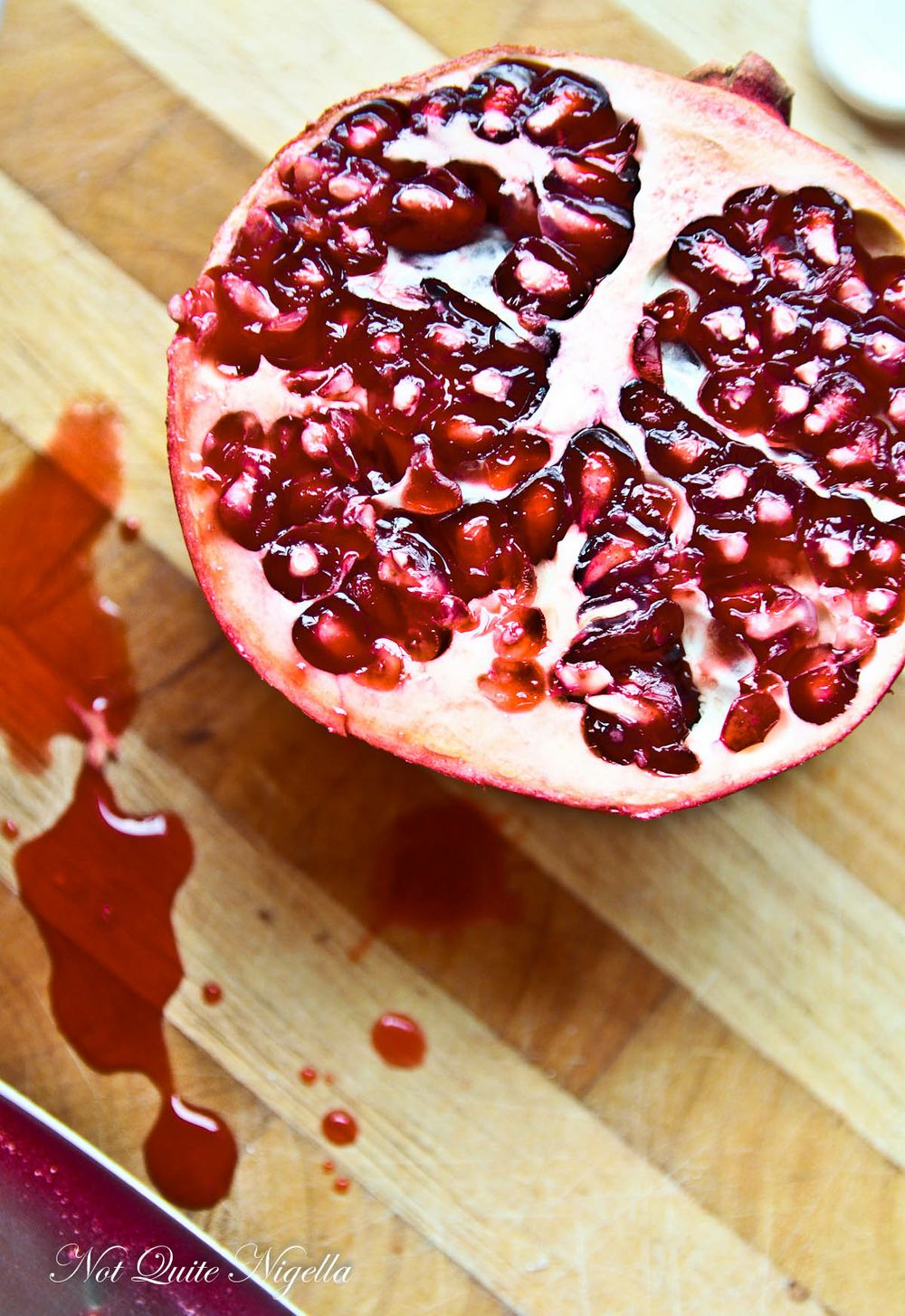 It was really with jelly loving Mr NQN rather than Hugh Hefner in mind that I made these. The ideal texture of panna cotta has been compared to a woman's bosom (real, I presume, not faux). I know that you can go sweet or savoury with pomengranate but I found myself in the most disturbing quandry - being without any dessert in the fridge! So working quickly, I made one layer of pomegranate jelly and then cooked the panna cotta layer while that was setting in the fridge. I'm always nervous about turning out jelly as I had run out of my gelatine sheets and was using powdered gelatine. I just remembered that 3 teaspoons gelatine powder set 500mls of liquid and I hoped that it was wobbly enough to have visual appeal but it was set enough to be able to hold its shape. Mr NQN's response? He ate all six.

So tell me Dear Reader, would you like someone to pick through all of your food to get you the best bits? And do you find wobbly jelly as giggle inducing as I do? Or is that just me? And would you ever be a Playboy mansion girlfriend? :P 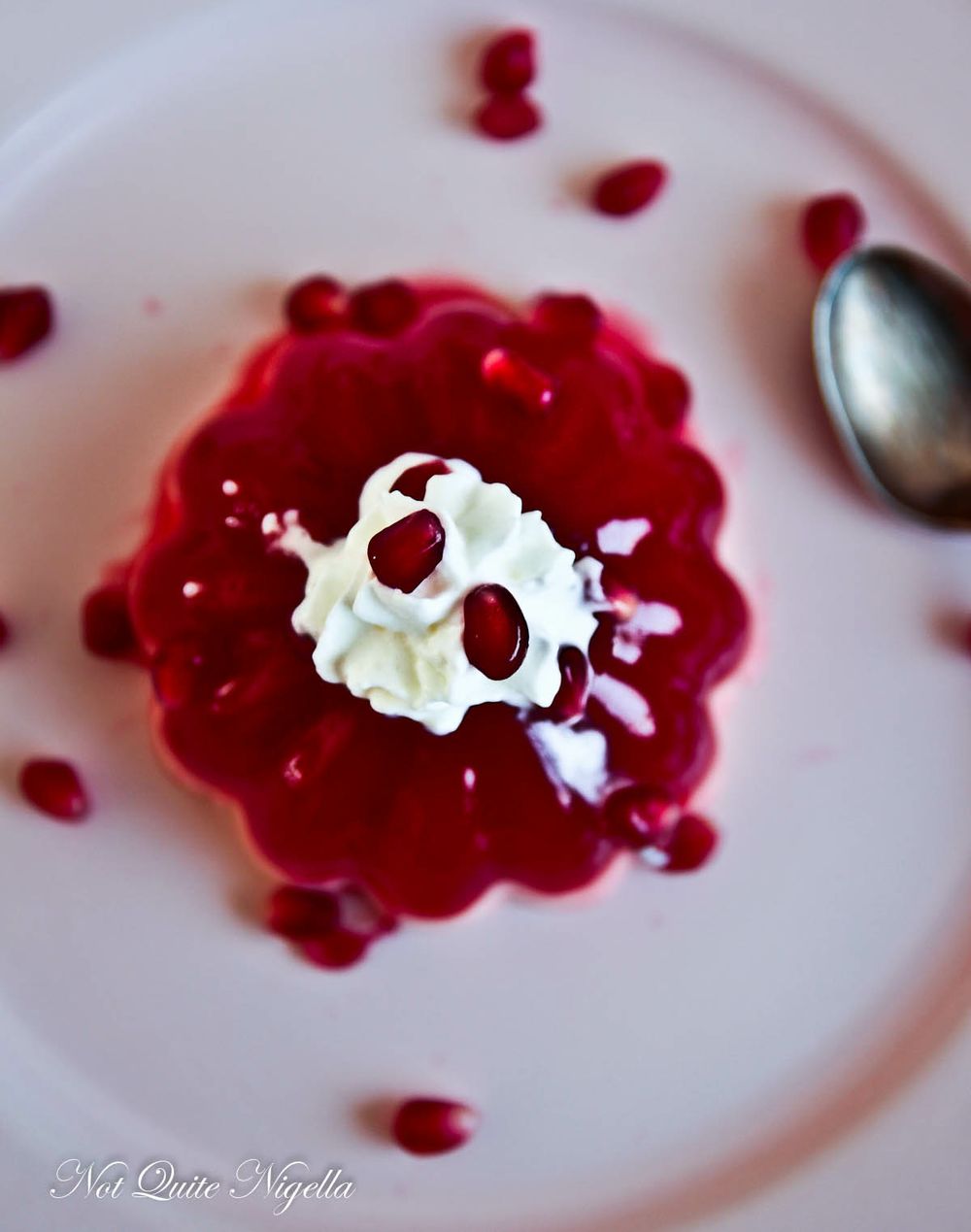 Preparation and cooking time: 10 minutes (30 minutes if you're making your pomegranate juice from scratch) 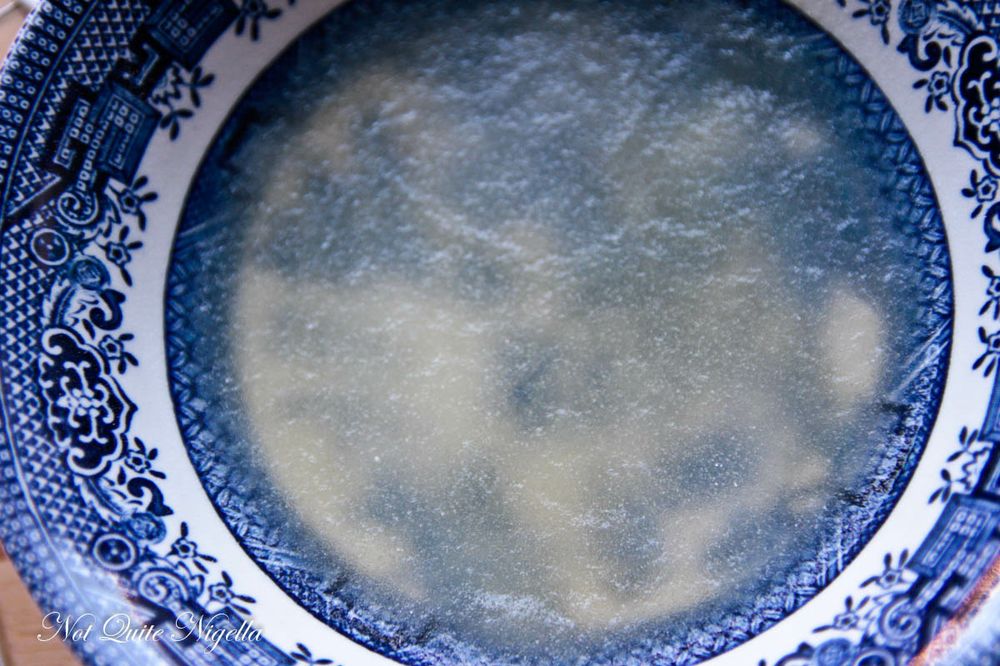 With gelatine powder sprinkled on top 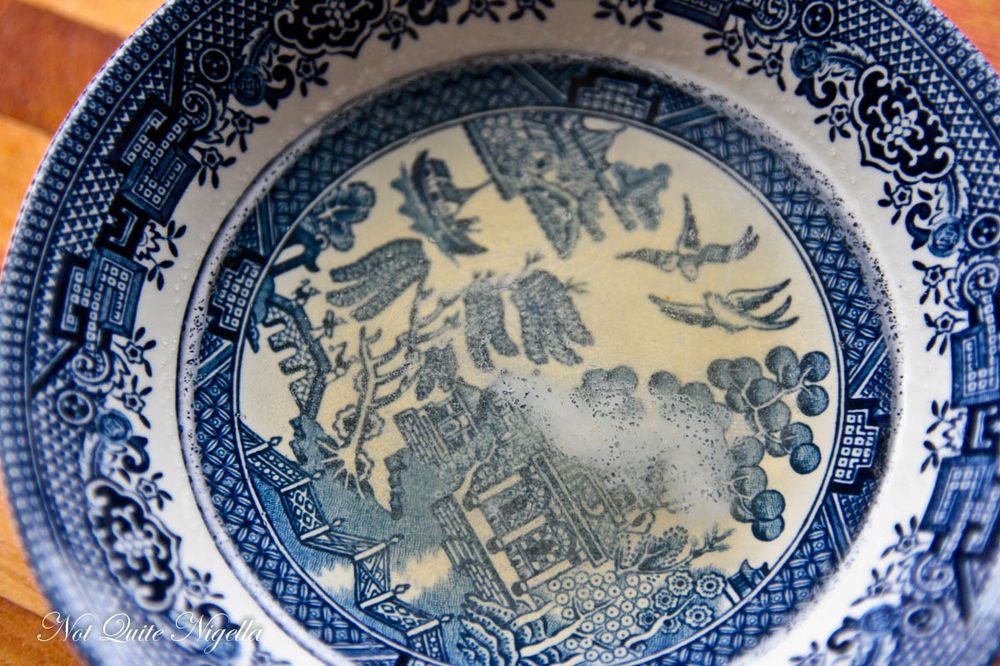 The gelatine melted into the water

*To make pomegranate juice, cut pomegranates in half and then squeeze out the arils or seeds removing as much of the white membrane as possible. Process in a blender or food processor and strain. Approximately 2 pomegranates yields 1 cup of juice. Top the rest up with water if you are a little short.

Step 1 - Heat pomegranate juice and sugar in a small saucepan until sugar has melted. Meanwhile, place the 1/2 cup of water in a microwave proof bowl and sprinkle gelatine powder over the surface of the water. Microwave this for 30-50 seconds on 50% heat until it becomes syrupy and the crystals of gelatine have disappeared. If you are using gelatine sheets, soak them for 5 minutes in cold water and then squeeze them to get rid of any excess water. Add the gelatine to the pomegranate juice and stir until well combined and remove from heat to cool. 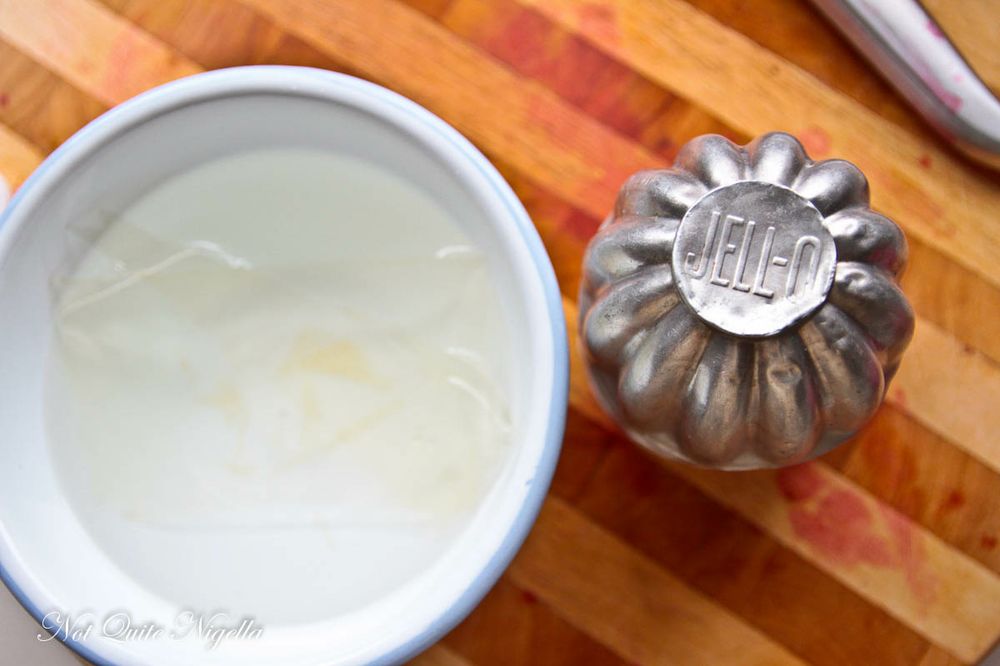 Step 2 - Spray the inside of the jelly molds with the non stick spray. Pour the juice into a jug and distribute among the six molds. Skim off any bubbles or foam from the oil spray. Place in the refrigerator for a couple of hours until set. 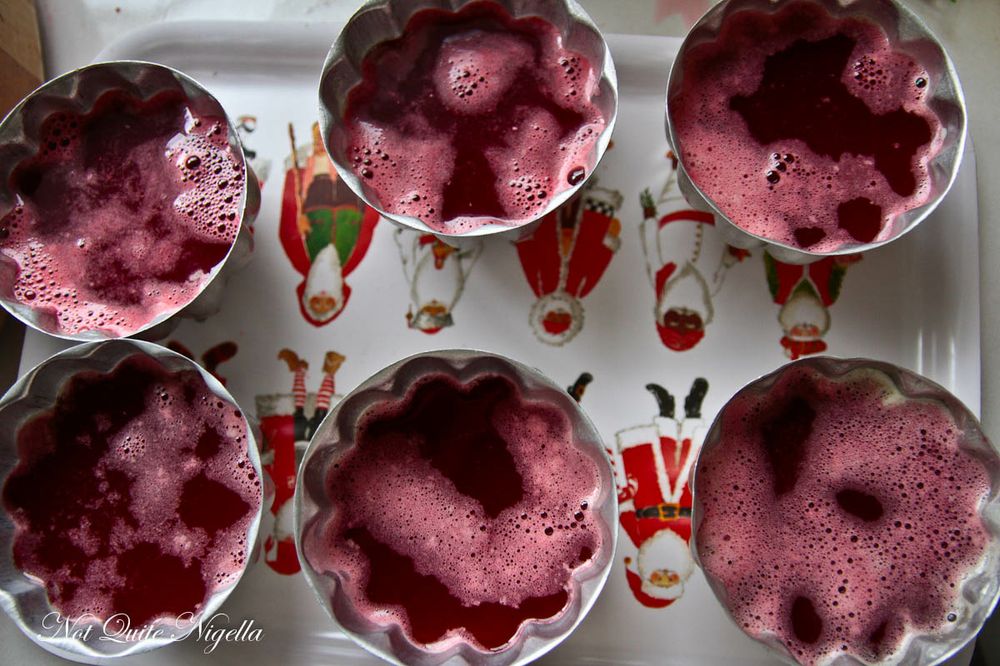 Step 3 - Make the vanilla panna cotta layer by heating the cream, milk and sugar in a small saucepan and then add the vanilla bean paste. Meanwhile, place the 1/4 cup of water in a microwave proof bowl and sprinkle gelatine powder over the surface of the water. Microwave this for 30-50 seconds on 50% heat until it becomes syrupy and the crystals of gelatine have disappeared. If you are using a gelatine sheet, soak it for 5 minutes in cold water and then squeeze them to get rid of any excess water. Add the gelatine to the cream and stir until well combined and remove from heat to cool. You want this to be room temperature but still liquid-if it is too hot then it will melt the pomegranate jelly.

Step 4 - Pour into a jug and divide between the six jelly cup pouring over the set pomegranate jelly. Refrigerate until firm.

Step 5 - These jellies are temperature sensitive and wobbly so I'd take them out prior to serving. Run a sharp knife around the edge and quickly dunk them in a bowl of warm water. Invert onto a plate-remember where the jelly lands on the plate is generally where it sticks so make sure to place it in the centre for best presentation. Top with a dollop of cream and some pomegranate seeds. 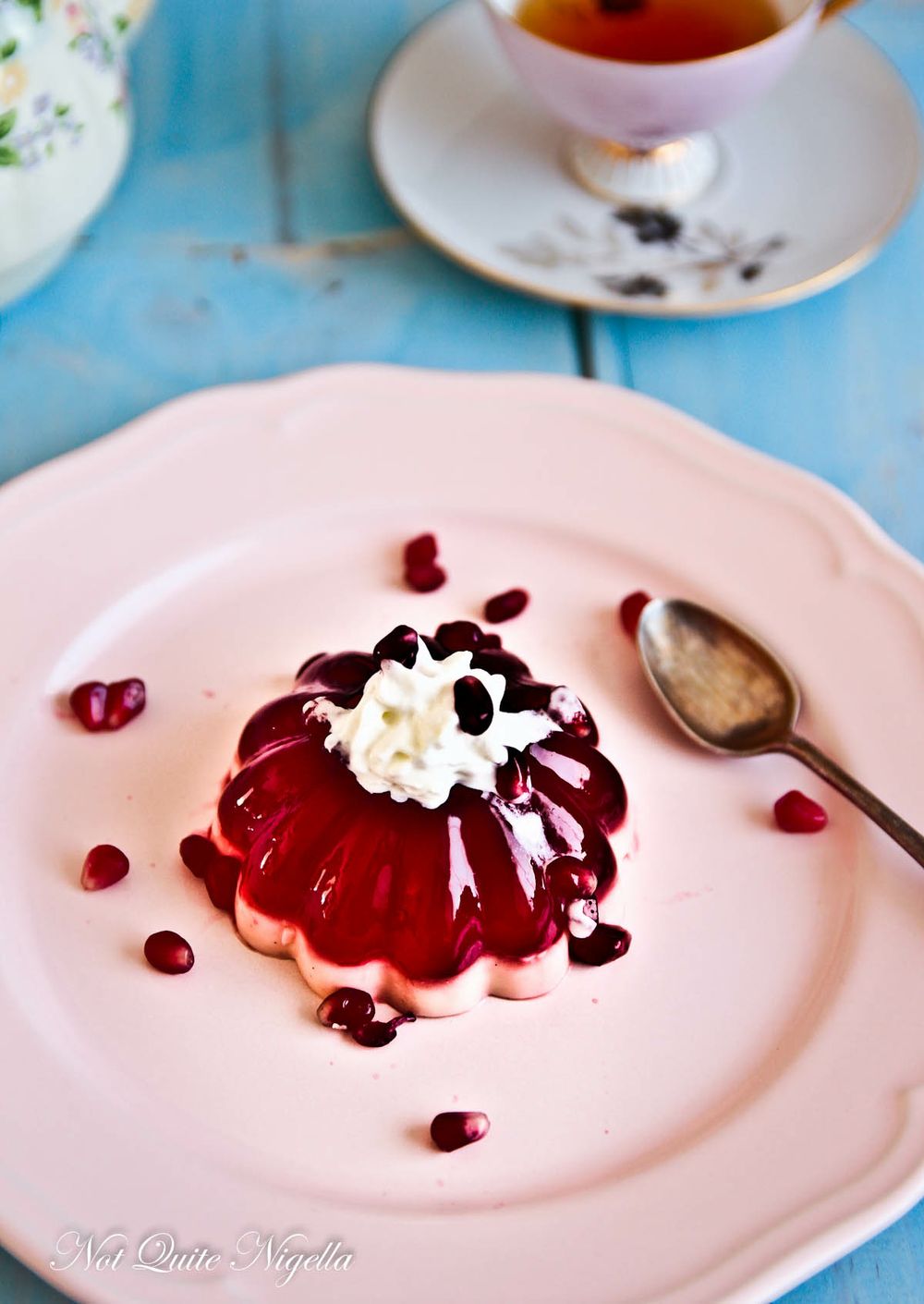