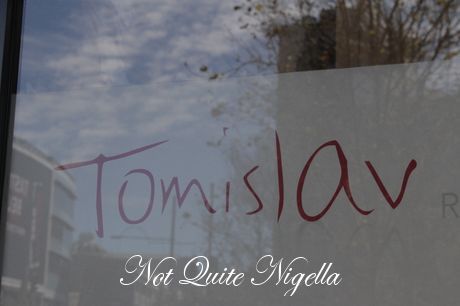 I take a look at my schedule for the day when I wake up.

10am Desserts at Tomislav 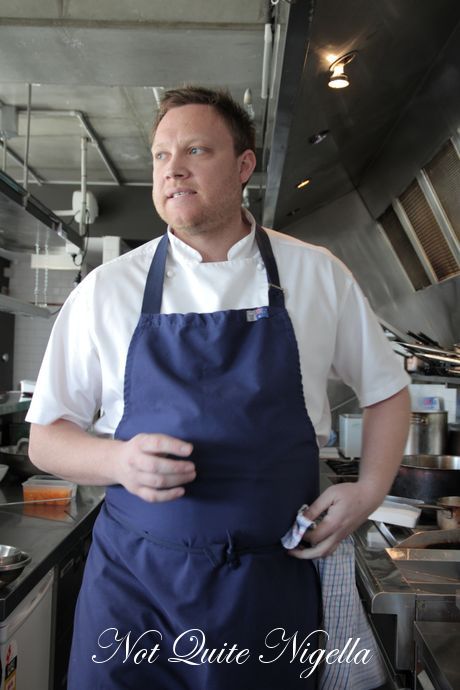 Please understand that not all of my days start with dessert at 10am (although I do wonder why more don't). And also I don't take 1.5 hours to get ready (it takes me 35 minutes) but I do potter about and do other things like clean up after Mr NQN's hurricane in the morning (today I found an apple and a sock on the rug). And what am I doing today? I am getting a dessert Masterclass with chef Tomislav Martinovic. He is going to show me how to make two of his signature desserts and he will explain the inspiration behind them. 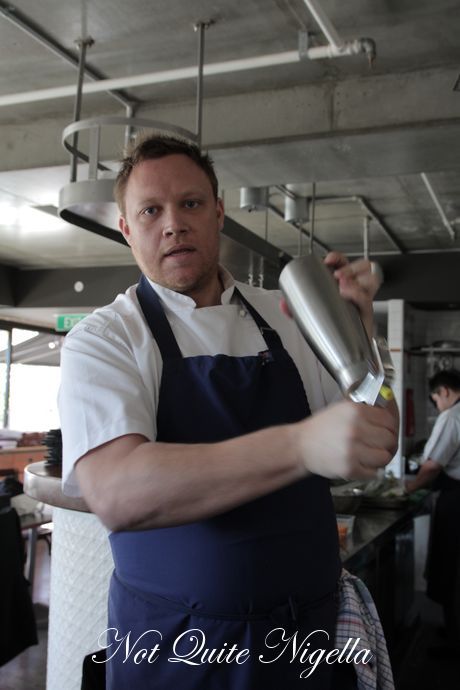 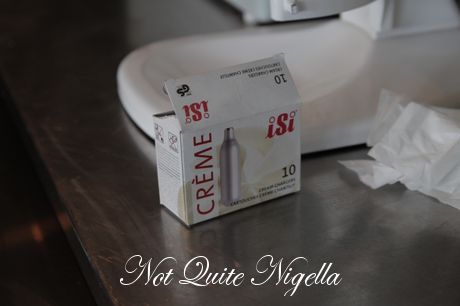 "Whenever I think of cheesecake, I think of the Sara Lee French vanilla cheesecake" Tomislav says when he starts putting together the cheesecake. Of course having worked for Heston Blumenthal and having a kitchen full of boy's toys and gadgets it's not exactly going to be the same cheesecake. It starts off the usual way, with cream cheese but this cream cheese is beaten for 10 minutes to become totally smooth. He adds the vanilla to the cream cheese and mixes it together giving it a thickened cream consistency. Easy! 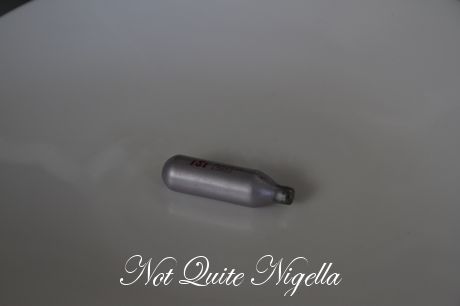 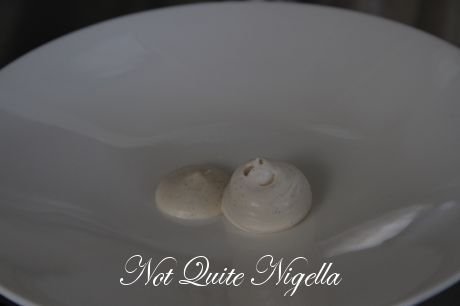 Now comes the fun bit. He takes out his siphon canister (as you do) and loads one nitrogen cartridge and shakes it. He dispenses a small blob and it's still to soft so he inserts another and shakes it and presto, the correct light as air whipped cream consistency. These siphon canisters are available at most chef's specialty stores and retail for about $140 and a pack of 10 nitrogen cartidges costs $5.50. 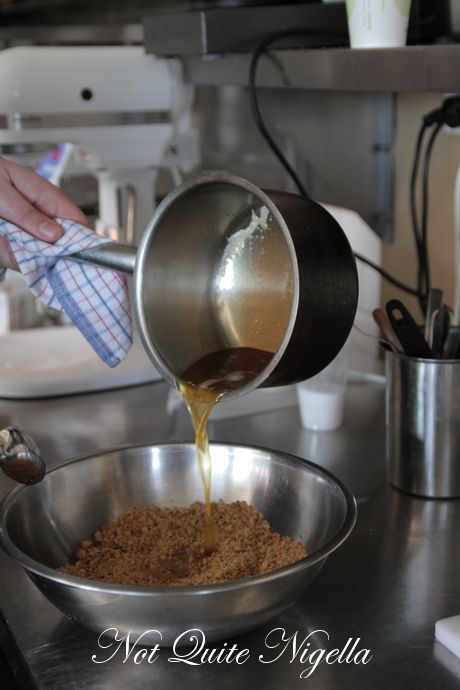 The base is a delectable nutty biscuit made nuttier by using beurre noissette (browned butter) and about an equal ratio of melted butter to digestive biscuit. Sorry to deliver the fattening news :P 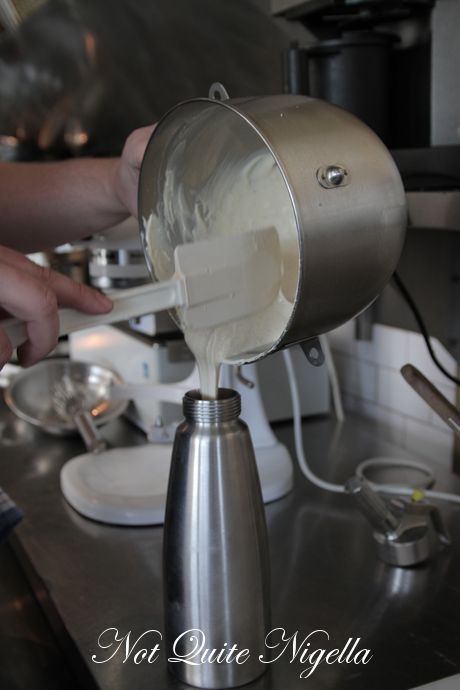 "It's all about what housewives use" Tomislav says and that is why they use McVitie's digestives.  He explains that the technique and making something that is not usually possible to make at home is what keeps diners coming. Another trick to his dessert is using salt in all of them to balance the sweetness and that his desserts are not excessively sweet. He shows me how to plate up the cheesecake. The base is a cut out round of the butter and biscuit crumbs and any extra are spooned under the rhubarb compote which is cooked but still retains a bite to it. 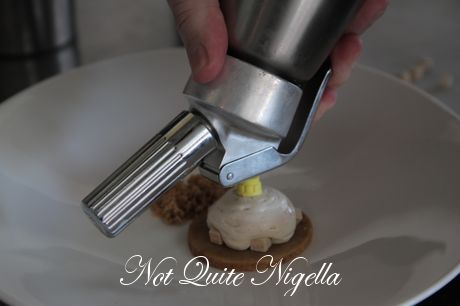 He pops in some cream cheese jelly cubes and it's ready. I don't need much prompting to try this dessert. It was my favourite dessert here and I'm a huge fan of light as air cheesecakes. "Can I finish it all?" I ask eagerly scooping up spoonful after spoonful. 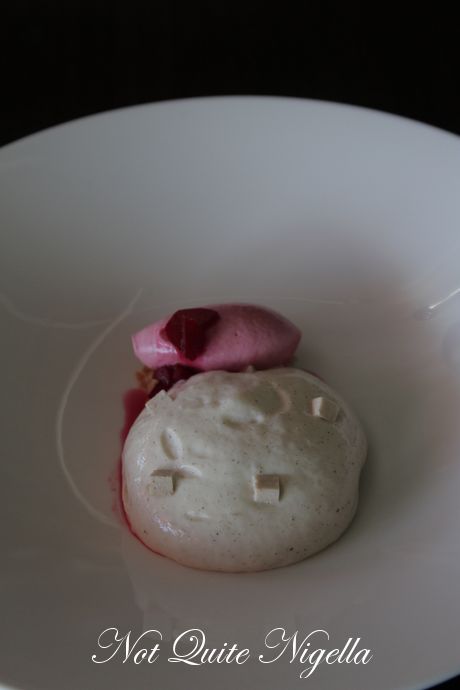 Step 1 - Melt the butter and add to crushed biscuits.

Step 2 - Beat the cream cheese in mixer with paddle attachment.

Step 3 - Once soft combine all other ingredients.

Step 6 - Shake canister and release cheesecake mix from siphon onto biscuit base. 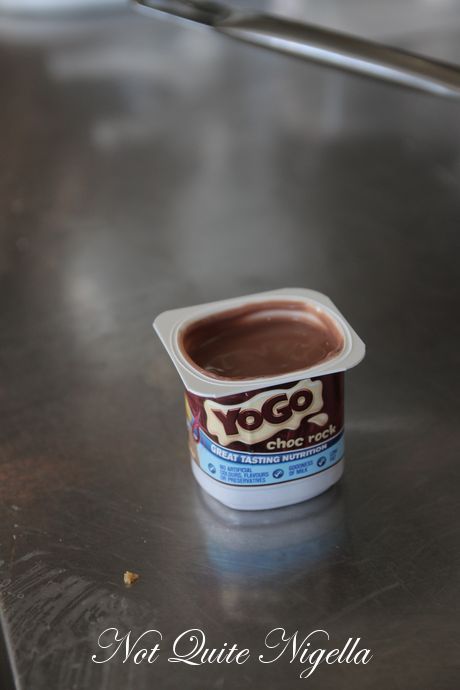 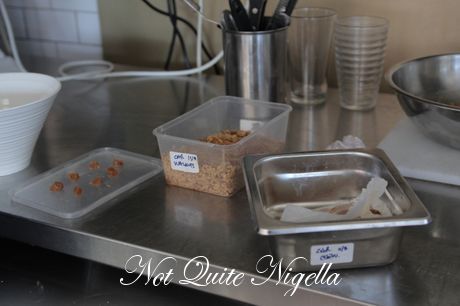 "Have you tried Yogo lately" he asks me handing me a tub of well.. Yogo. Actually no I haven't tried Yogo since I was a child! Tomislav is quick to say that it was the texture he was looking for and not the taste which is a good thing as it tastes pretty awful. The texture that he means is the pudding that sits on the tongue before dissolving. 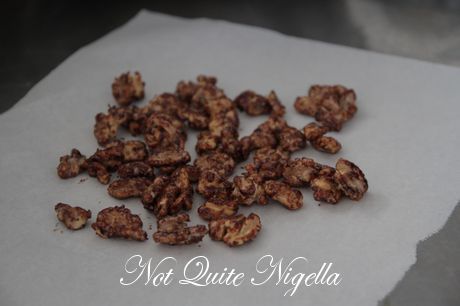 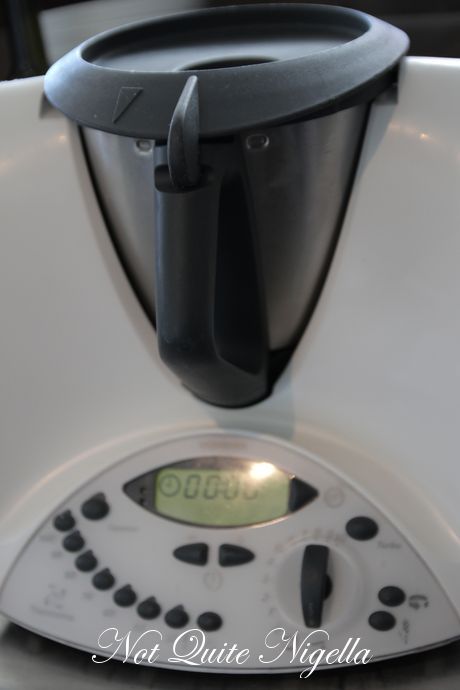 His next gadget is the Thermomix. Priced at about $2,000 it is one of those machines that can do all sorts of things and can take the place of several pieces of cooking equipment. Today it is cooking the caramel custard at 80 degrees for about 10 minutes until it thickens. I ask Tomislav what it is that he enjoys about cooking using these tools and he answers simply, "Exact cooking" and for a restaurant, consistency is key. Most UK and European kitchens use all of these tools and when he worked with Heston Blumenthal (who he says is a very nice man), he learnt to use them to achieve consistency of product. 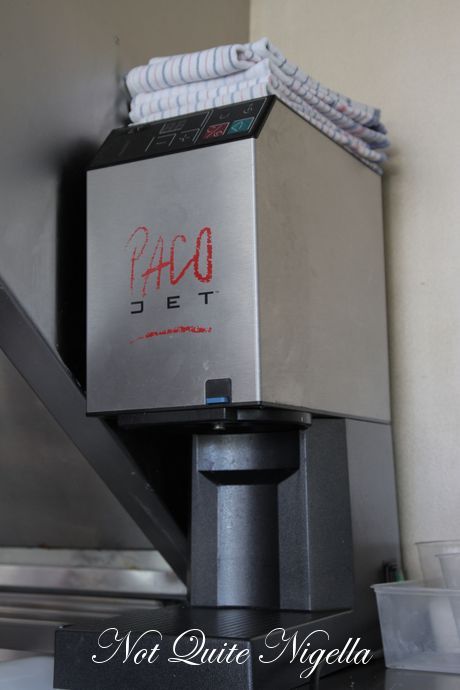 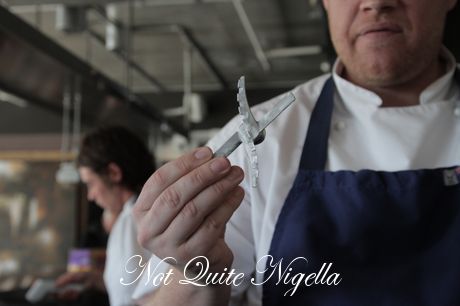 He then makes use of the Paco Jet machine where he churns the yogurt sorbet so that it has the right consistency. The Paco Jet machine is a staple in many kitchens and doesn't come cheap at $6-$7,000. They are indispensable though and can churn ice cream from liquid to a scoopable solid within minutes. He tells me that he has had to adjust recipes for the machine too as they require 40% less sugar and less cream and fewer egg yolks. Yes! There is good news on the calorie front! :P  For him, the perfect consistency of ice cream is McDonald's soft serve (and not Mr Whippy which has too much air but specifically McDonalds). 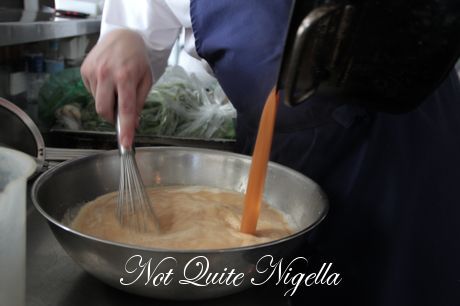 Now even if you don't have the Thermomix, this dessert can be done using a regular domestic oven. He actually discovered this method of "yogoing" custard when he was making a creme brulee and the power went out just before they were fully set. So if you bake the custard (which is essentially a creme brulee custard) you simply take it out of the oven before it has fully set and then let it cook outside of the oven. 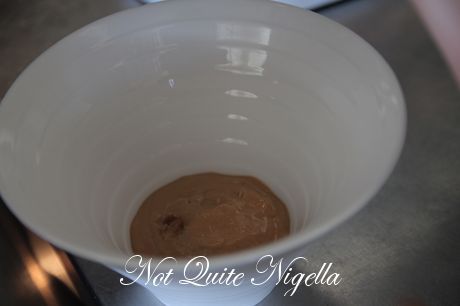 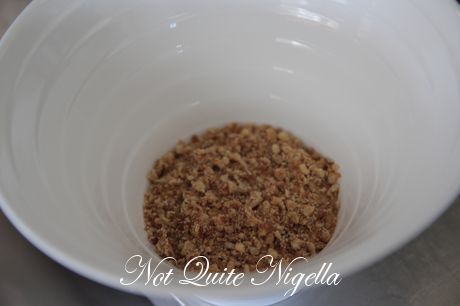 The caramel pudding is then spooned into a bowl and he drops some small caramel chew cubes into it to give it texture. Then it is topped with finely processed toffeed walnuts and a quenelle of yogurt ice cream which tastes just like pure yogurt. And I ask him about quenelles. Is it true that people spend weeks trying to perfect them. Sadly it is but it makes me feel better that I am so terrible at doing them.

Step 2 - Bring the milk to the boil and add to mixture.

Step 3 - Also bring the cream to the boil.

Step 4 - Make caramel till dark and bitter and pour the cream on top.

Step 6 - Probe the custard @ 8c and it will take approximately 10 mins.

Step 7 - Pass through fine chinois (or fine sieve) and add 3 leaves of gelatine.

So tell me Dear Reader, what was your favourite childhood dessert? Mine was the Sara Lee sultana pound cake-but only the top please! :)

Psst, if you missed it, I was mentioned in SMH Good Living and The Age Epicure section on Tuesday! How exciting!

And if you have a bit of Martha in you, head on over to the Modern Wedding Blog where I write my fourth out of four guest posts for them. I am channeling my inner Martha today ;) 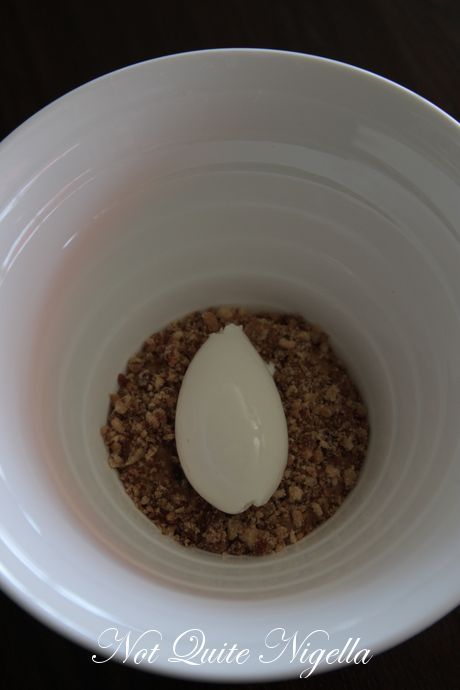 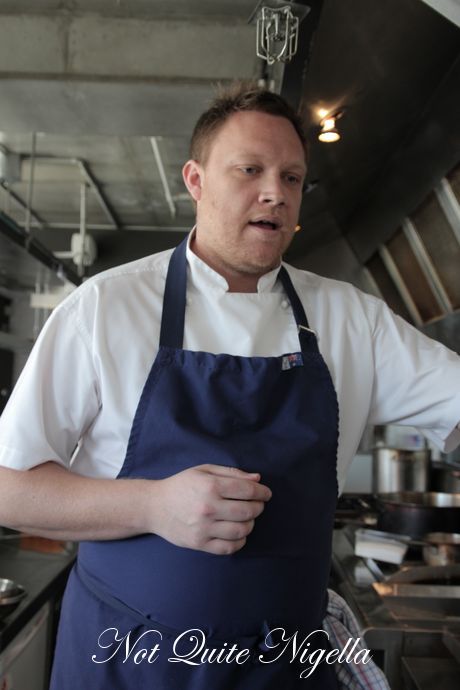 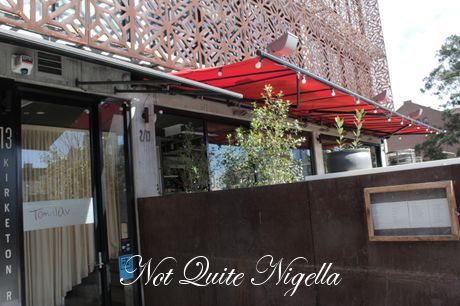