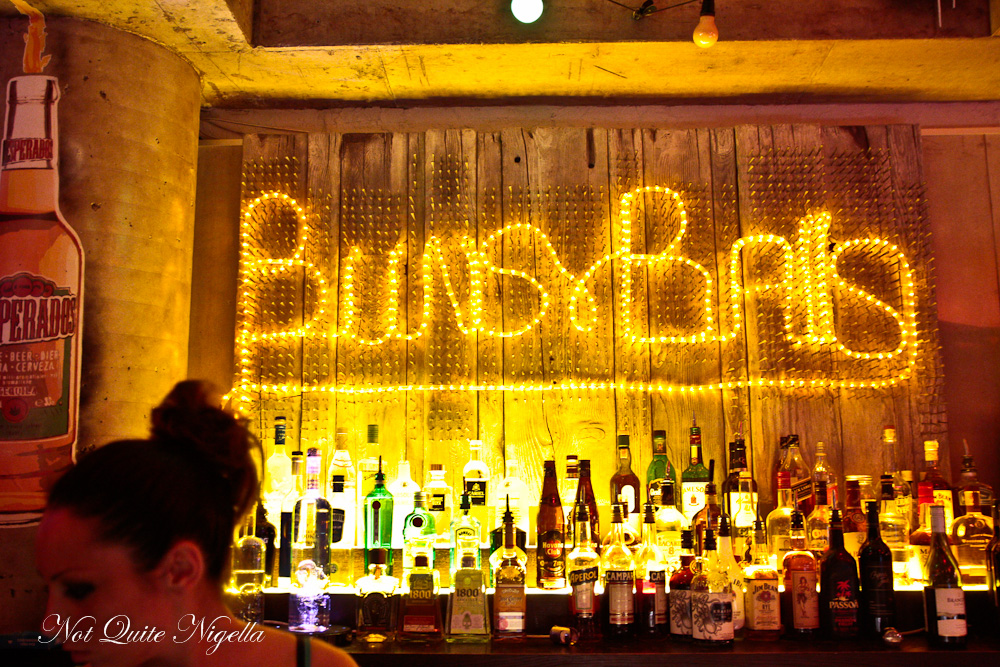 It wasn't the greatest of starts. Mr NQN was in a terrible mood. We'd just driven around Kings Cross looking for a park that lasted for longer than an hour and we were out of luck. Annoyed, Mr NQN gave up, threw up his hands and parked at a parking station next to our destination. 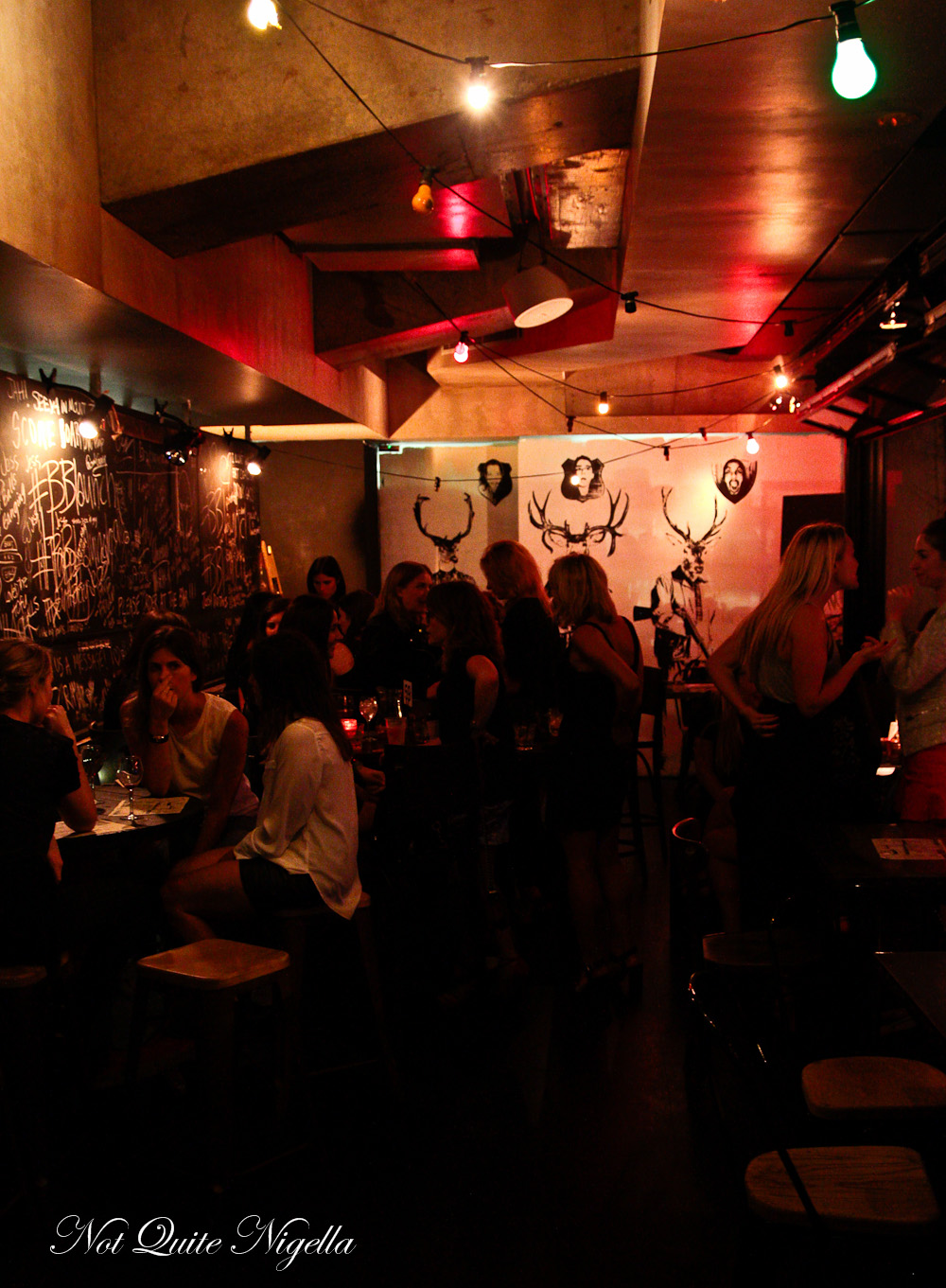 "$39 for two hours!" he said glaring at me pointedly as if I had a hand in setting up the fees. Along with being extortionately priced, it had to be the dodgiest car park in Sydney smelling of urine and general squalor.

The elevator wasn't working so we made our way up the fire stairs, lit blue to deter people shooting up in the stairwell and the last five metres to the door was dangerously pitch black. We were meant to carpool with Belinda but she was running late but no amount of cajoling could unstiffen Mr NQN's shoulders or turn his grimace into a smile. 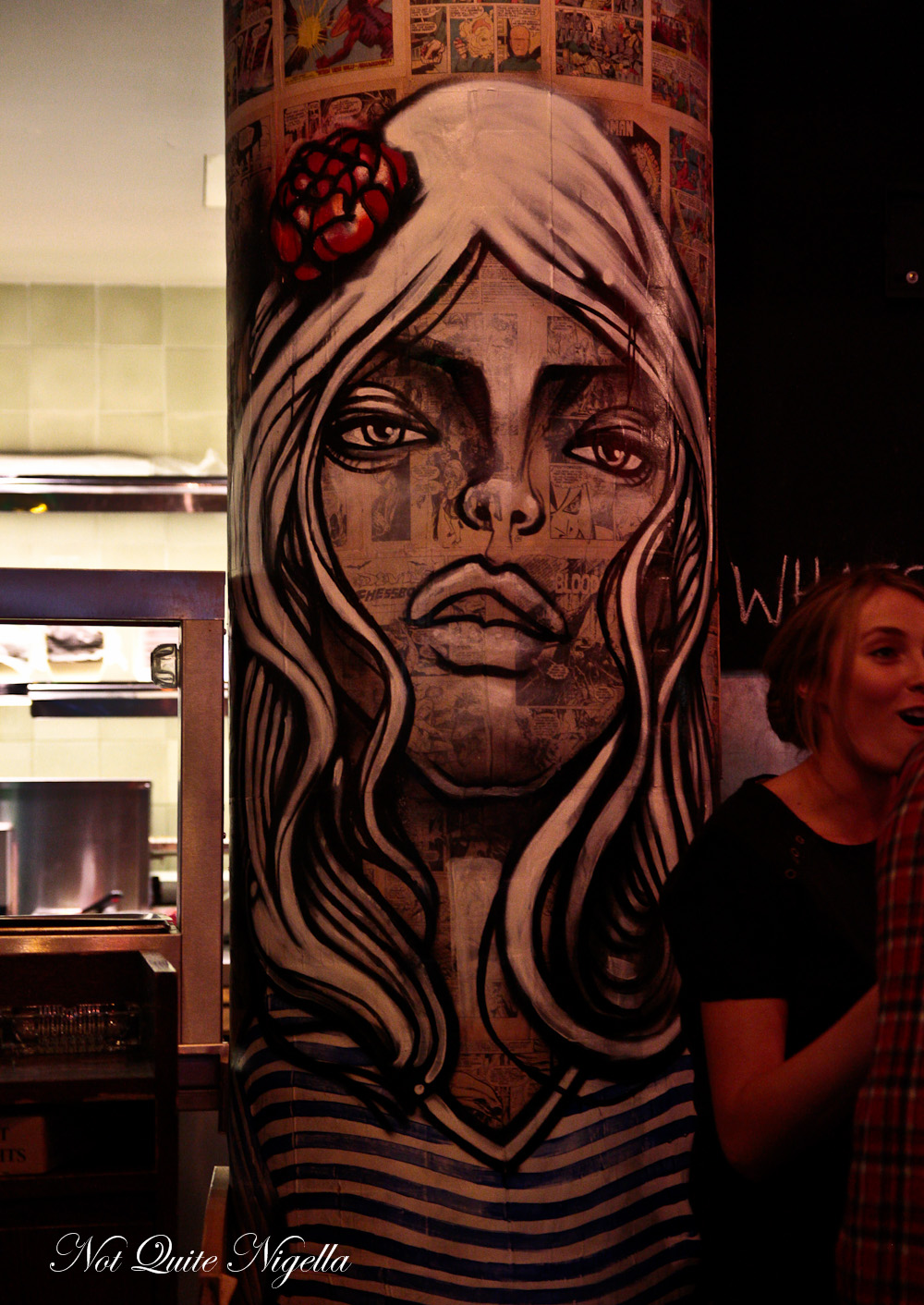 They show us to a table by the kitchen at Buns & Balls, located on Bayswater Road where Concrete Blonde used to sit. There is graffiti on walls, old skool style arcade games, music and plenty of people having after work drinks.

A waiter comes over to advise us that we order and pay at the bar and asks us if we would like some recommendations. "Don't worry honey, the food looks very reasonably priced" hoping to entice a smile out of stiff lipped Mr NQN. Then Nick arrives, gives Mr NQN an enthusiastic handshake and says "I like this place!!" and suddenly Mr NQN's mood lightens instantly. Phew! 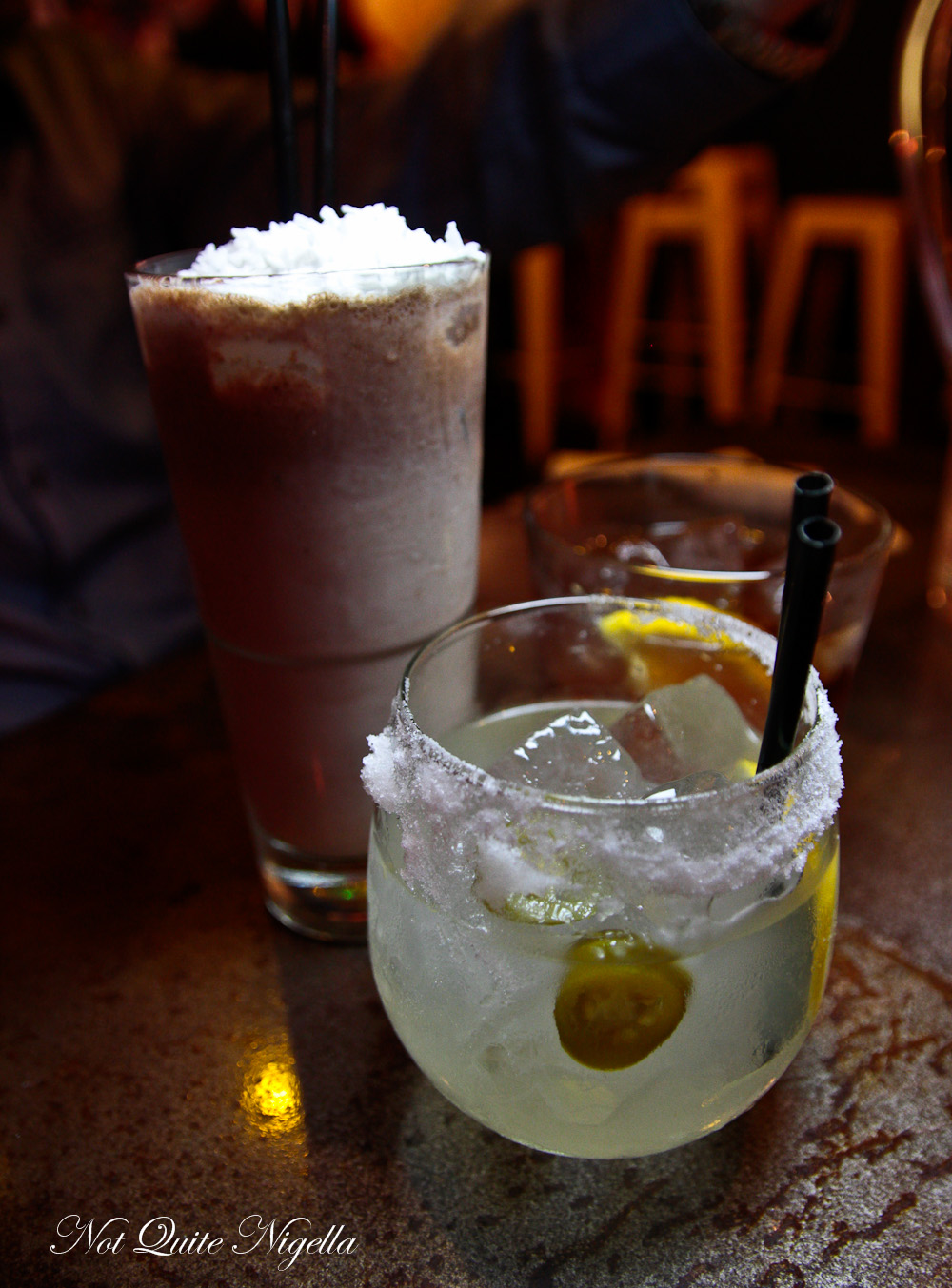 Once Belinda arrives, it's cocktail time. She and I go up to the counter to order and there is one side for drinks and one side for food. We watch as they spoon out Nutino from a jar to make the chocolate shake. It is made with Milo, Nutino, Frangelico and Baileys and is dangerously good and drinkable. I also try a little of Belinda's jalapeno margarita which really packs a spicy punch which she loves. "I think I might be addicted to chilli" she says. 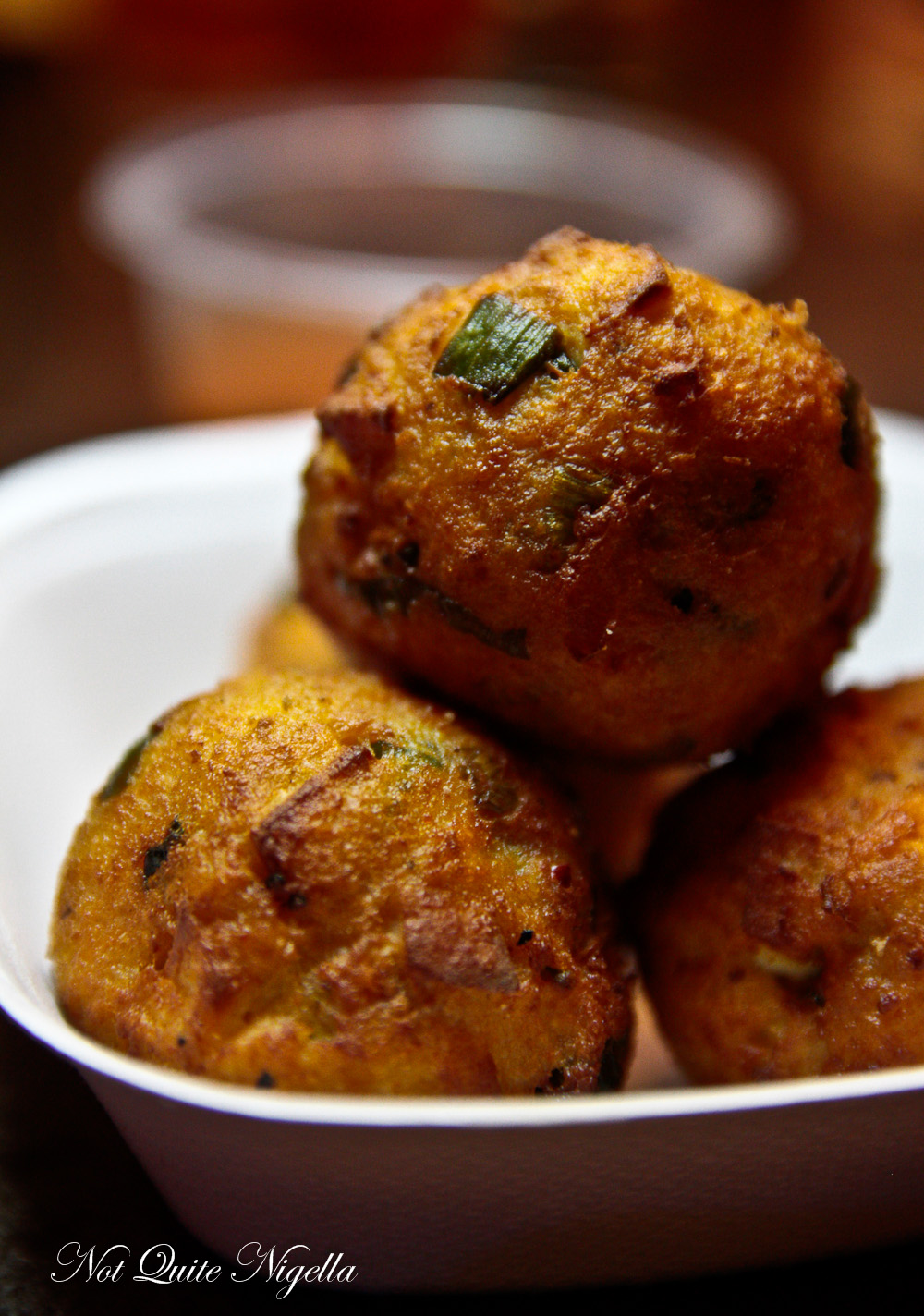 The food comes out quickly and fills the entire table. Given the name we figure we need to try both buns and balls and the meatball that peaked our curiosity was the tofu meatball. They were a surprising hit, tasting of all things like Chiko rolls. They arrive with a chilli nap sauce but I enjoy them on their own. 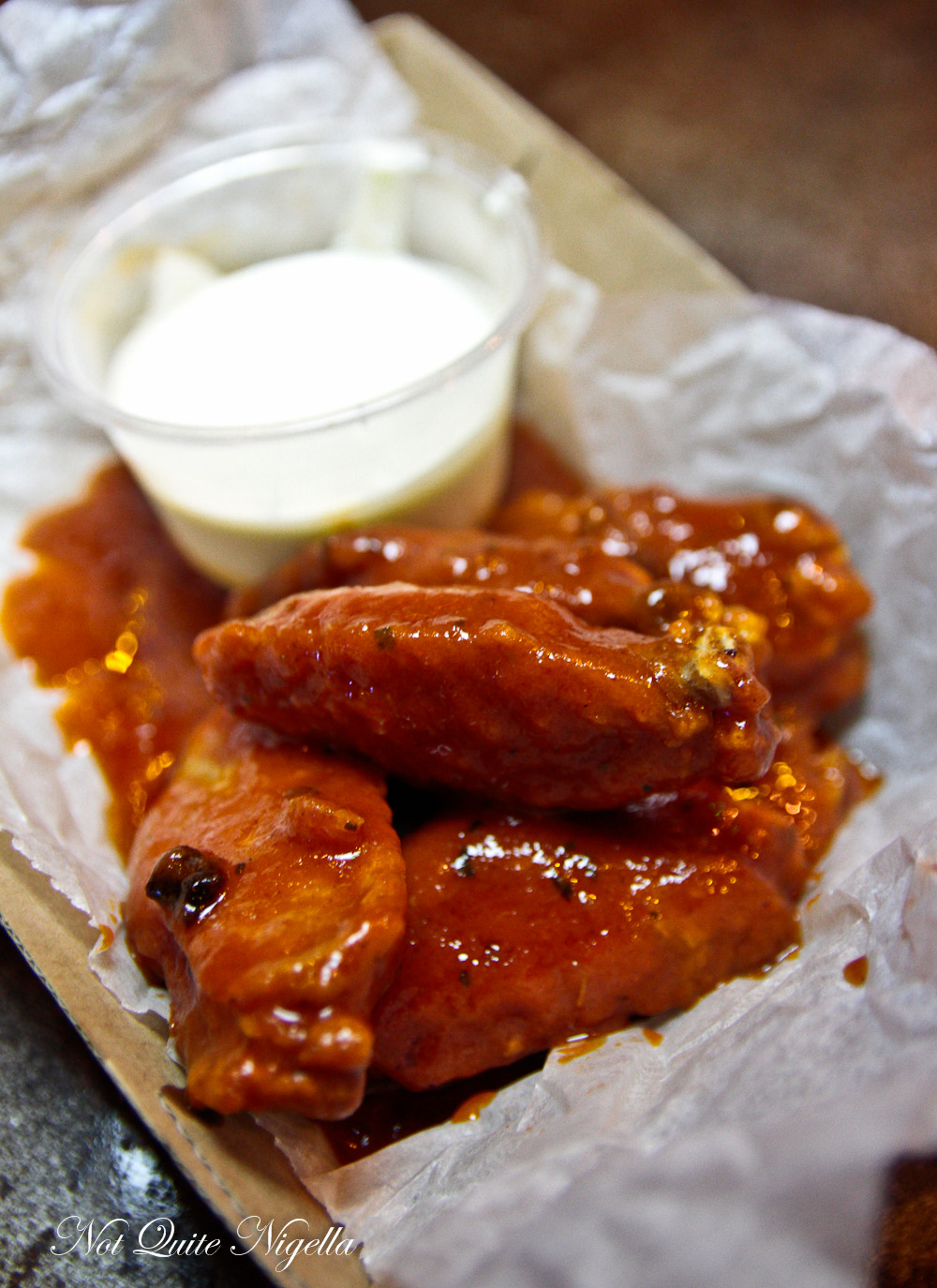 Spicy Louisiana Wings $1 each, serve of 6

The spicy Louisiana wings are delicious and saucy, not as vinegary as we've had in America but sweet and fall off the bone. They come with a delicious blue cheese dipping sauce which we use also to dip our chips in. 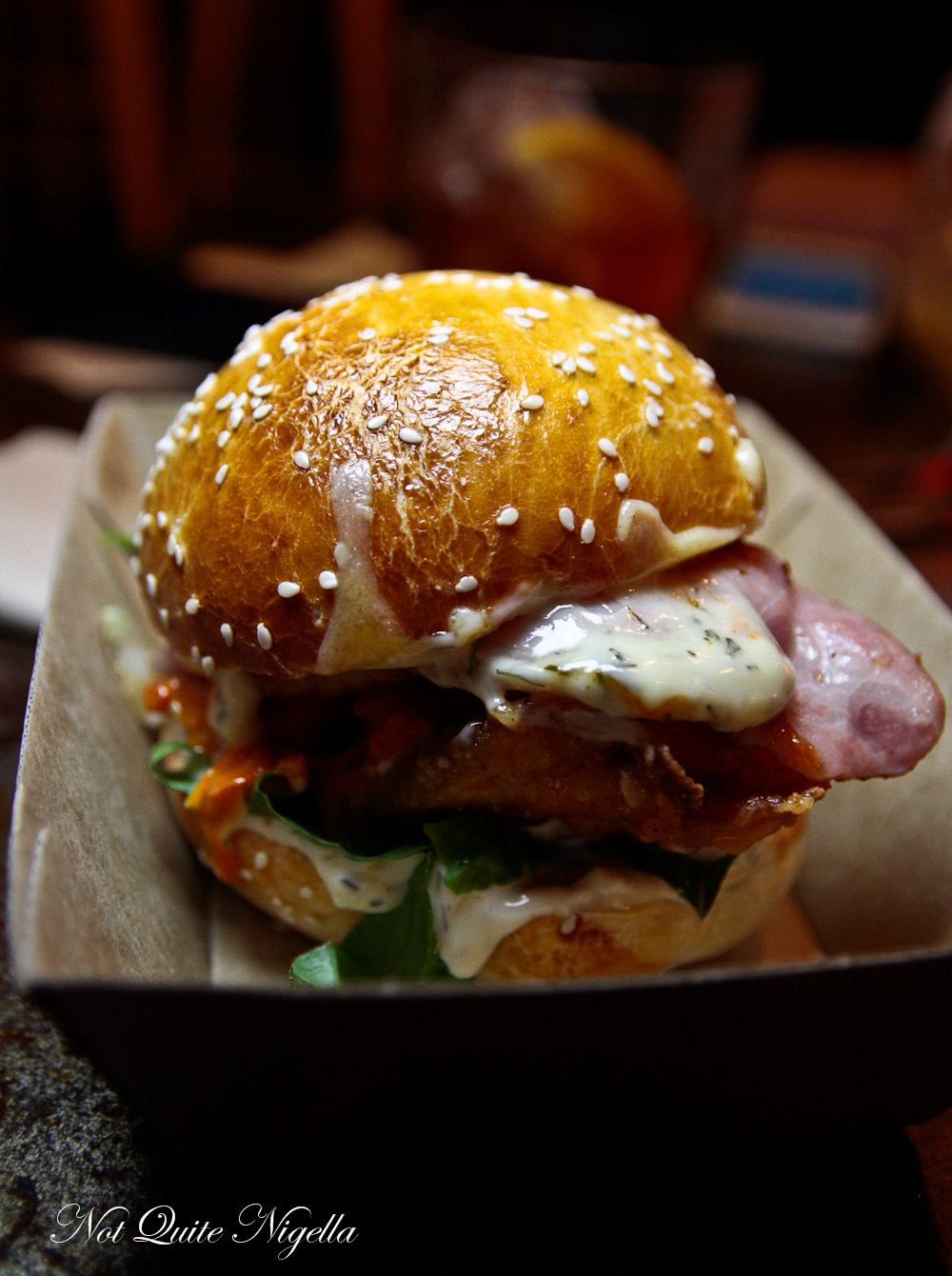 This was our waiter's recommendation and ends up being one of my favourite burgers. The burgers can also be served on gluten free buns although ours were the more regular variety. The fillet is tempura barramundi served with lettuce, cheese, chilli and their own dill and lime tartare sauce. What I like about these burgers is that they have a lot of sauce to them so that they aren't dry at all and the bacon adds a lot of unexpected flavour to the burger as you don't often see bacon and fish together. 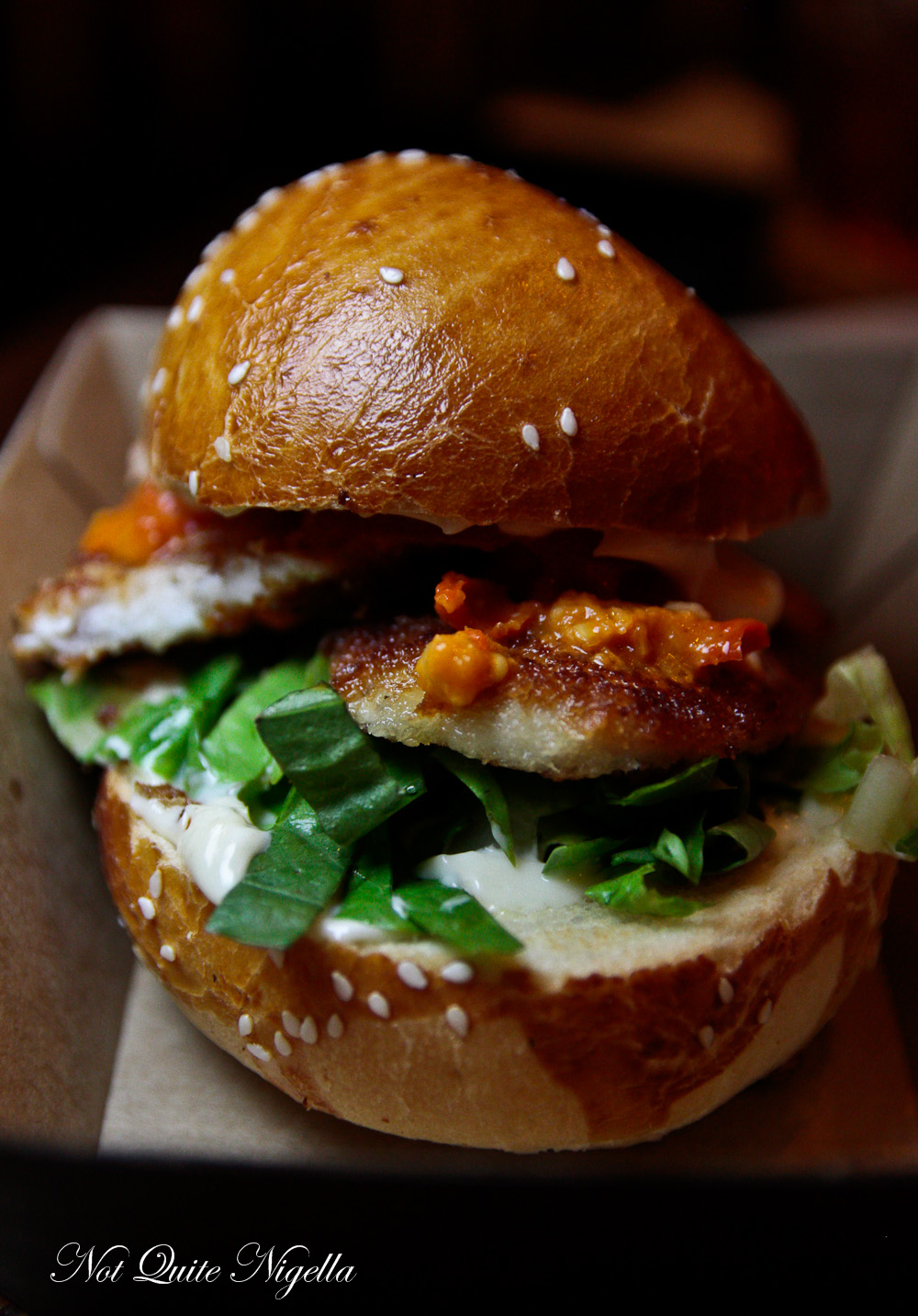 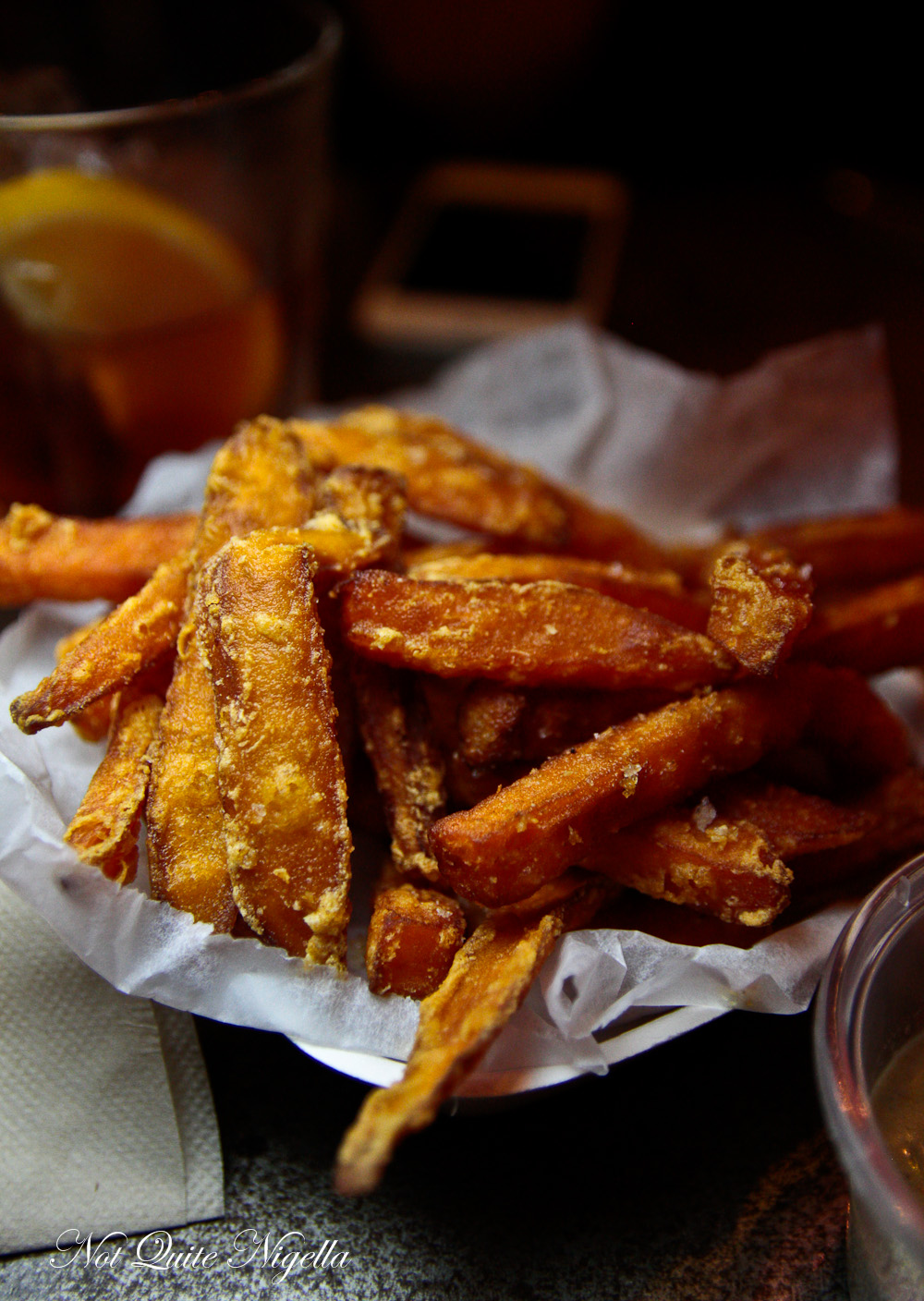 The fries and sauces are sold separately and the sweet potato fries are crispy on the outside and sweet and soft on the inside. The mushroom sauce is a creamy dipping sauce that goes well with the fries. 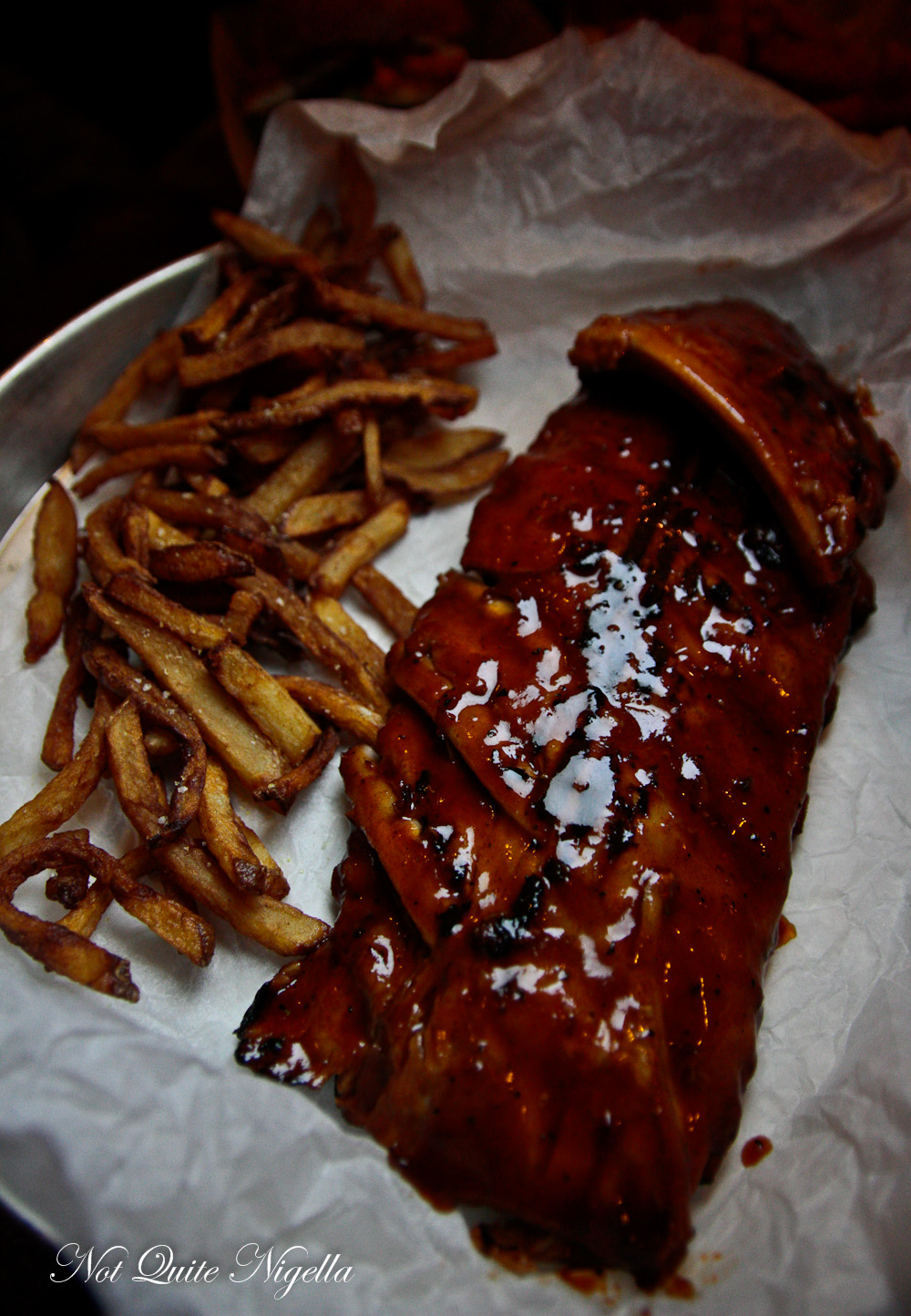 Every time we dine out with friends, they always remark about Mr NQN's enormous appetite and he showed no restraint with these. The largest meal is the half rack of pork ribs which takes up almost the entire table. Luckily Mr NQN and Nick were eating enthusiastically so paper plates were cleared quickly. "I promise, I don't keep him in a cage unfed" I say as he hoovers through food. The ribs aren't bad, they're good and certainly fall off the bone. The hand cut chips are plentiful and quite soft as hand cut chips usually are. I love dipping these in the chicken wing blue cheese sauce. 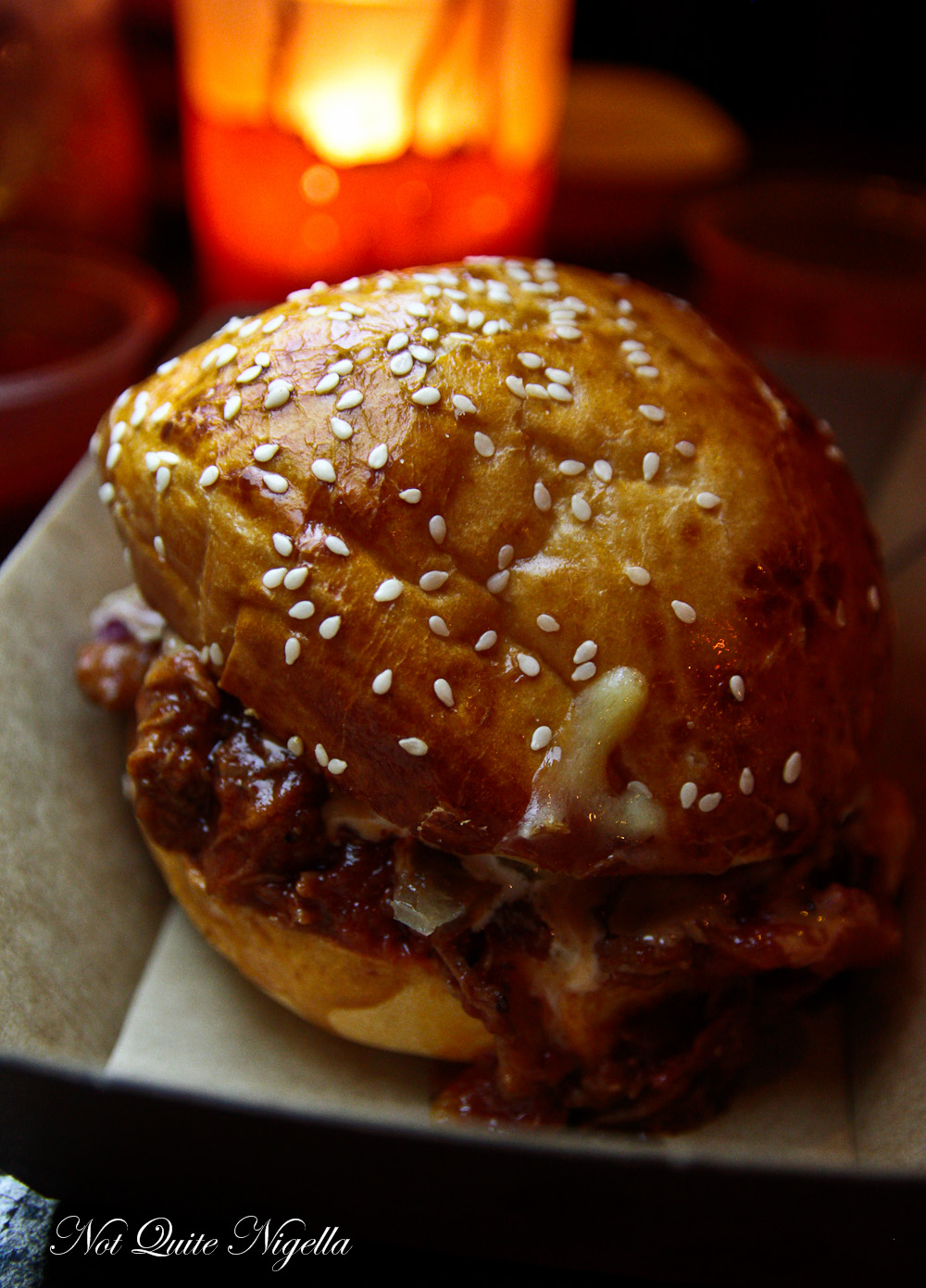 The sauciest burger is the braised chilli beef burger which has a sweet sauce much like pulled pork sauce. It comes out cheddar cheese, grilled onions, coleslaw and chilli and reminds me of a Sloppy Joe. 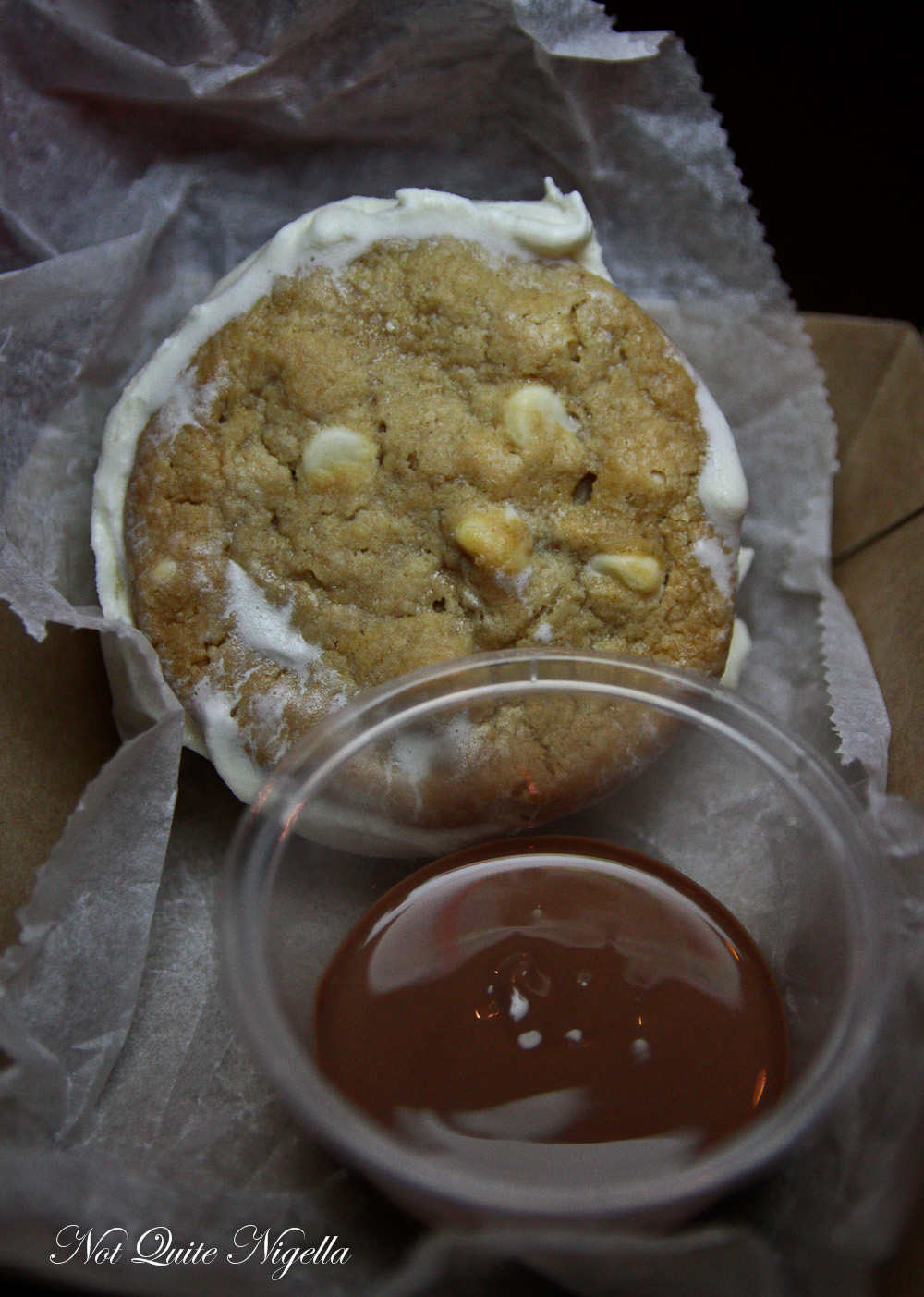 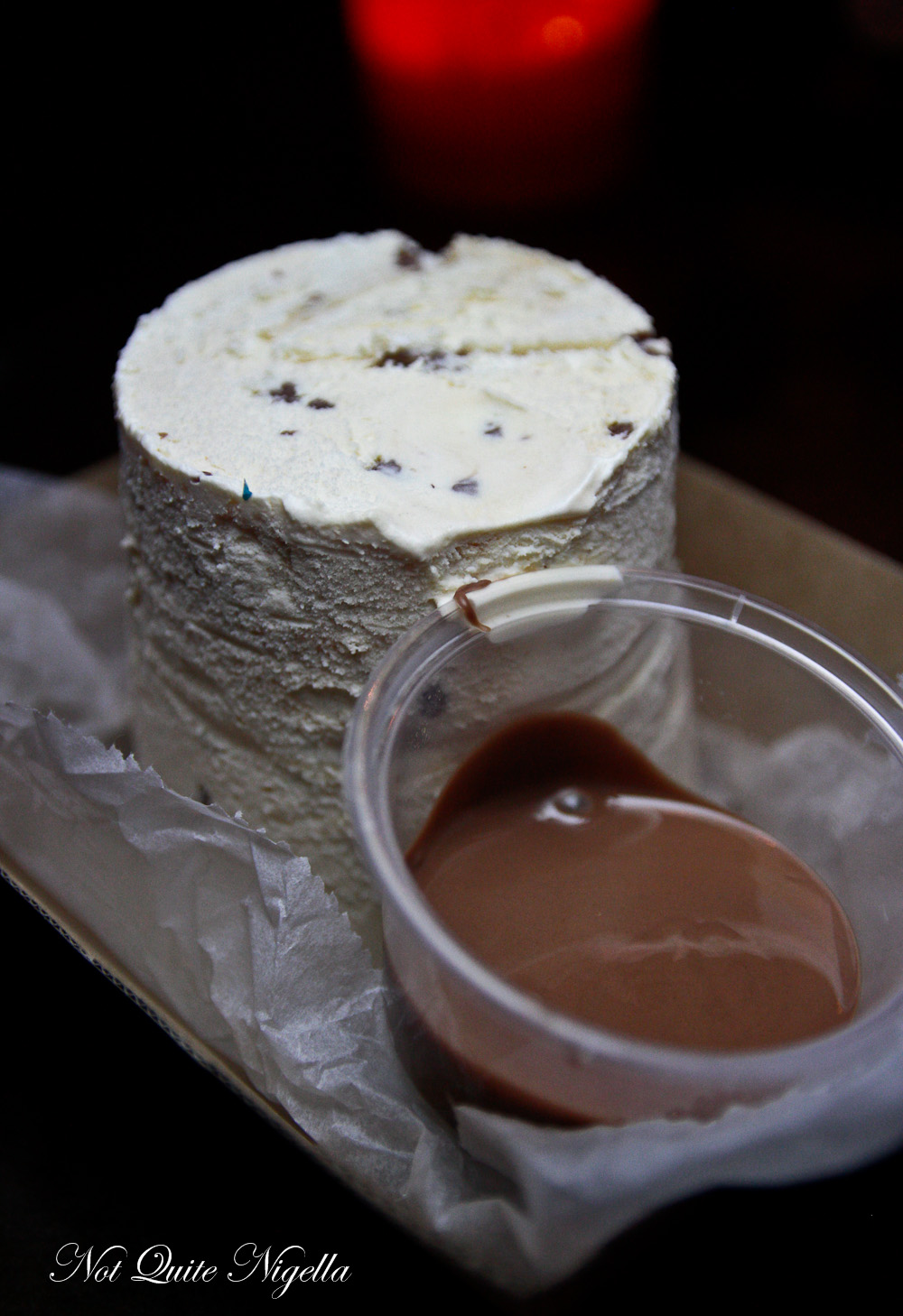 This is another enormous dessert and it is a large block of vanilla ice cream studded with chocolate, nuts and layers of salted caramel with a side of Belgian chocolate sauce. The ice cream is moreish especially with the chocolate sauce drizzled on top and it also does a bonus job of finally filling up the boys with its enormous size.

As the night goes on, the cigarette smoke wafts in from the people on the veranda (best to sit up the back if this bothers you) and the crowd gets thicker. There's cheering as a girl robot dances amongst her friends and we watch more buns and balls come out from the kitchen. Just another night at the Cross!

So tell me Dear Reader, do you think that you have a large, small or average appetite compared to your friends and family? And a very Happy New Year to all of you! May your evening be filled with fun and frivolity! I'm looking forward to seeing you all in 2014!! 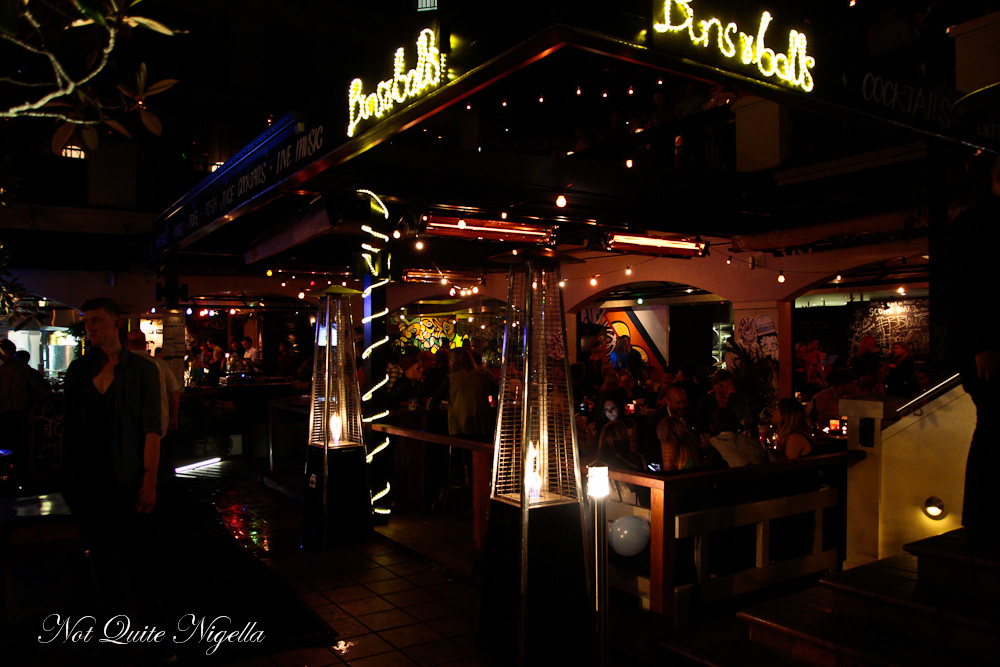