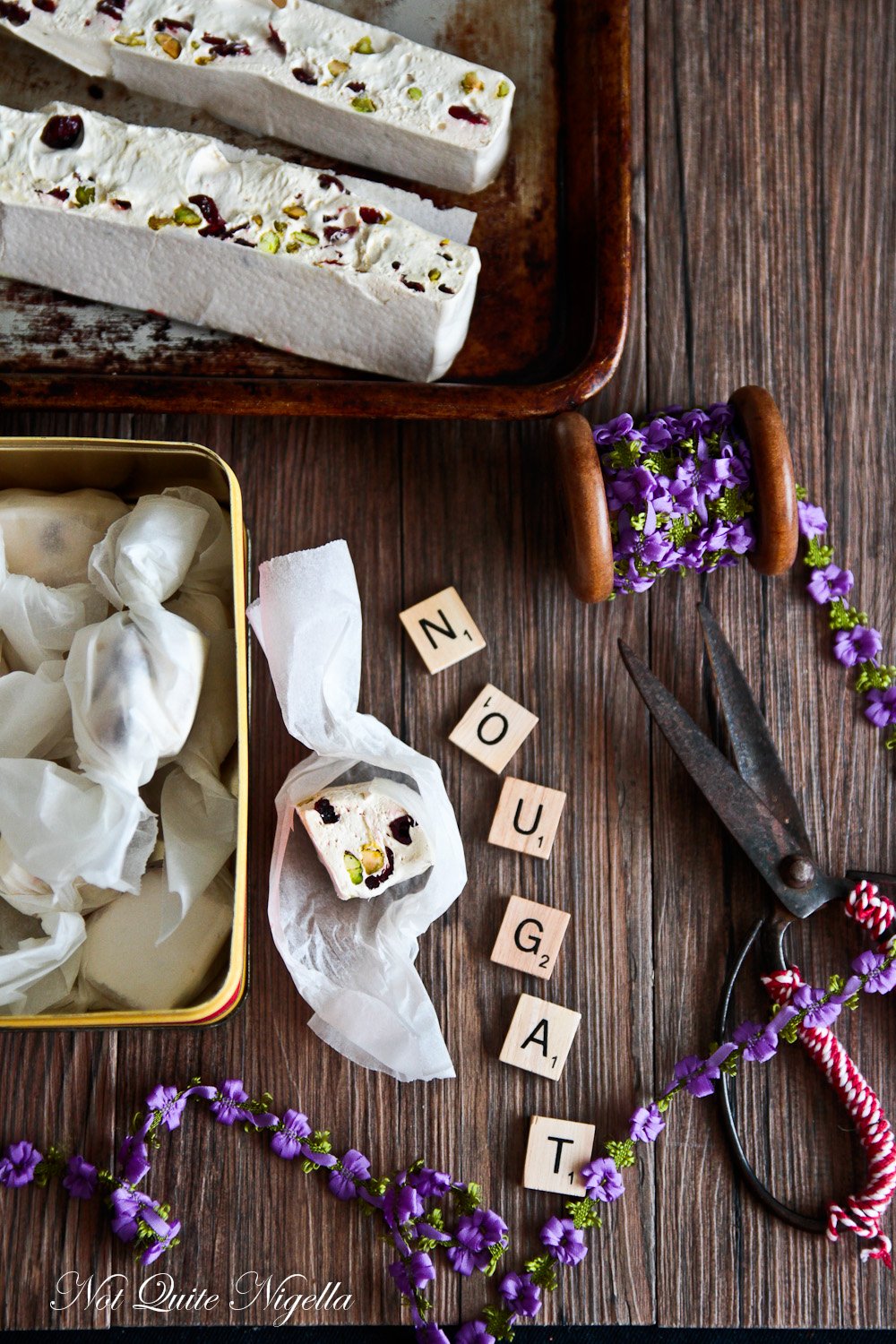 I would say that on the whole I am an honest person. If I am dishonest, it's generally to spare someone's feelings. On a few occasions, I've found money and handed it to security or the police and I always tell people if they give me too much change. But still, there are times when I feel like I seem downright shifty.

One of these times is when I check out of a hotel. They always ask "Did you have anything from the mini bar?" and I usually say no because I have better things to spend $10 on than a bag of nuts. Still, whenever I answer, I feel this creeping flush up my neck and I feel as though I am lying.

I then feel as though I should go into a big explanation to prove that I didn't eat anything from the mini bar or offer to go up and check with them. That's not even including the time that I accidentally picked up a really expensive bottle of cognac in a Dubai hotel and it was charged to my account due to the sensor activation. I was about to go all Cate Blanchett Oscar worthy dramatic when the clerk said "Oh that's fine, we'll take it off your bill." I got up from my knees and unclasped my hands.

Nowadays hotel mini bars are increasingly becoming better even stocking boutique gourmet items. Recently I saw an individual square of nougat wrapped in plastic. I picked it up and regarded the pretty pink and green flecks - it was a pistachio and cranberry nougat flavour. Then I put it down when I saw that it was $4.95 for that little one inch square. 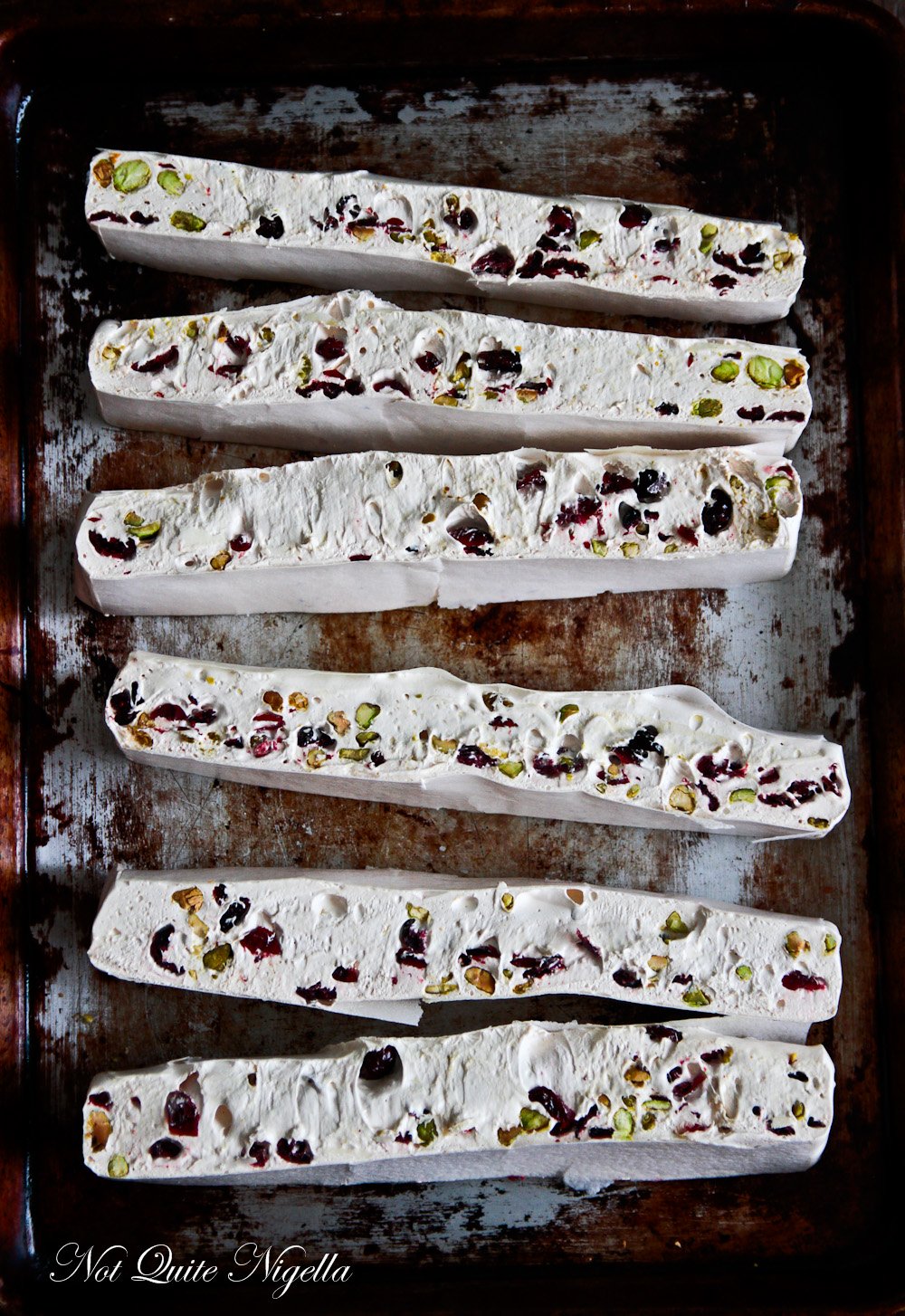 I've never made nougat before but this month's Daring Bakers challenge was nougat so that was all the prompt I needed. The ingredients were simple and the only thing that was a bit challenging was rice paper. Luckily my friend Celia had given me two packets of it. It comes in very useful at times like when you make nougat or make an armadillo road kill cake.

I chose the worst possible day to make it. Confectionery and sugars don't like humidity but I had little choice as I was going away. It felt stiflingly hot in my small kitchen with the sugar boiling away until it got to 143C/290F. The flavour was pistachio and cranberry flavour and I was utterly relieved to see that it worked out in the end.

The most challenging part was cutting it up as it's such a heavy item. The recipe below makes a very large amount of nougat. I ended up with 10 batons of it or 60 fat squares. I think in the future, I'll open up a nougat business and stock hotel rooms exclusively for $4.95 a square! ;)

So tell me Dear Reader, if you found a wallet or cash, would you hand it in? And do you buy items from the mini bar?

The March 2014 Daring Bakers' challenge was hosted by Rebecca of BakeNQuilt. She challenged us to learn to make classic nougat and to make it our own with our choice of flavors and add-ins.

Edible wafer paper is nice to have if you’re giving nougat as gifts as it helps with the stickiness issue. However, it’s not essential. If you can’t find it, grease the pan and then line it with parchment paper. Grease the parchment as well. You should probably wrap each cut piece individually to keep them from sticking together.

Fat (cocoa butter in this case) is added to nougat to give it a shorter texture and cleaner bite. I’ve tried the recipe without it and it still comes out tasting good, it’s just chewier. I haven’t tried any other fat in the mixture, but let me know if you do! Any fat added to nougat should be one that is solid at room temperature. 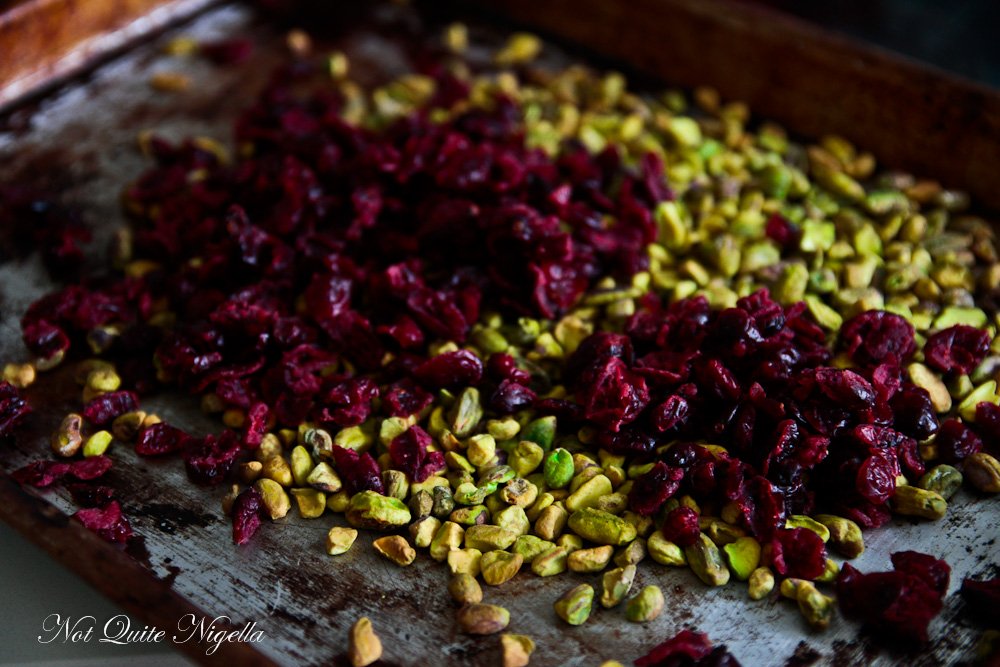 Step 1 - Place the toasted pistachios on a baking sheet and roast in a 320°F/160°C for 5 minutes until toasted (10 minutes if you're using almonds). Turn off the oven, add the cranberries if using and keep it warm. 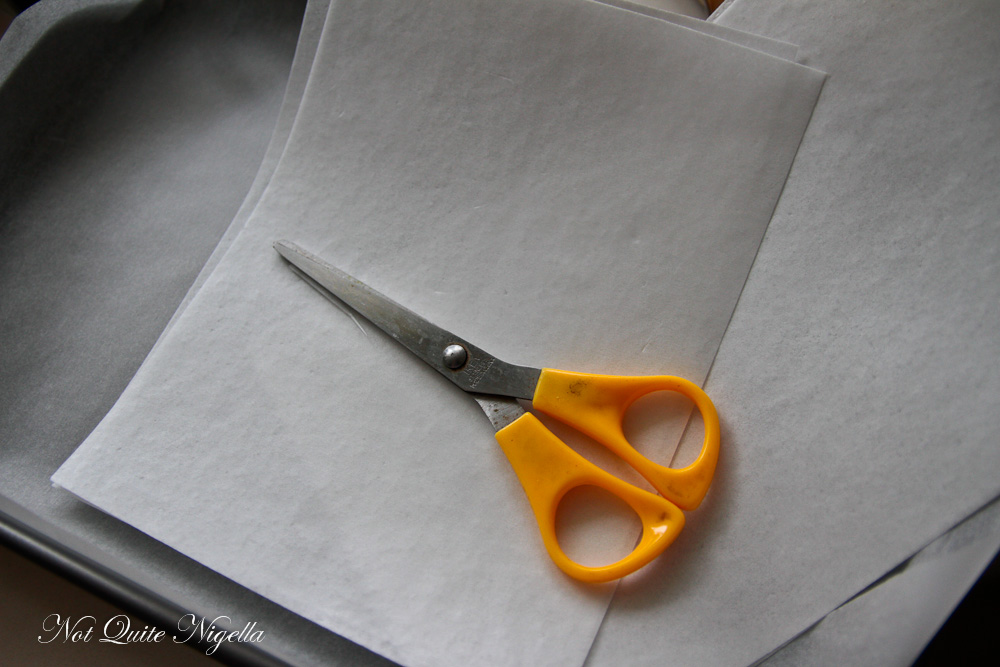 Step 2 - Line the bottom of a 9x13 inch (23x33 cm) pan with wafer paper, cutting it to fit. I like to put plastic wrap or parchment under the wafer paper just for extra insurance that I’ll be able to get the nougat out of the pan.

Step 3 - Combine the egg whites, sugar and cream of tartar for the meringue in a 4.5 or 5 quart (about 5 litre) mixer bowl fitted with a whip attachment but do not begin whipping. 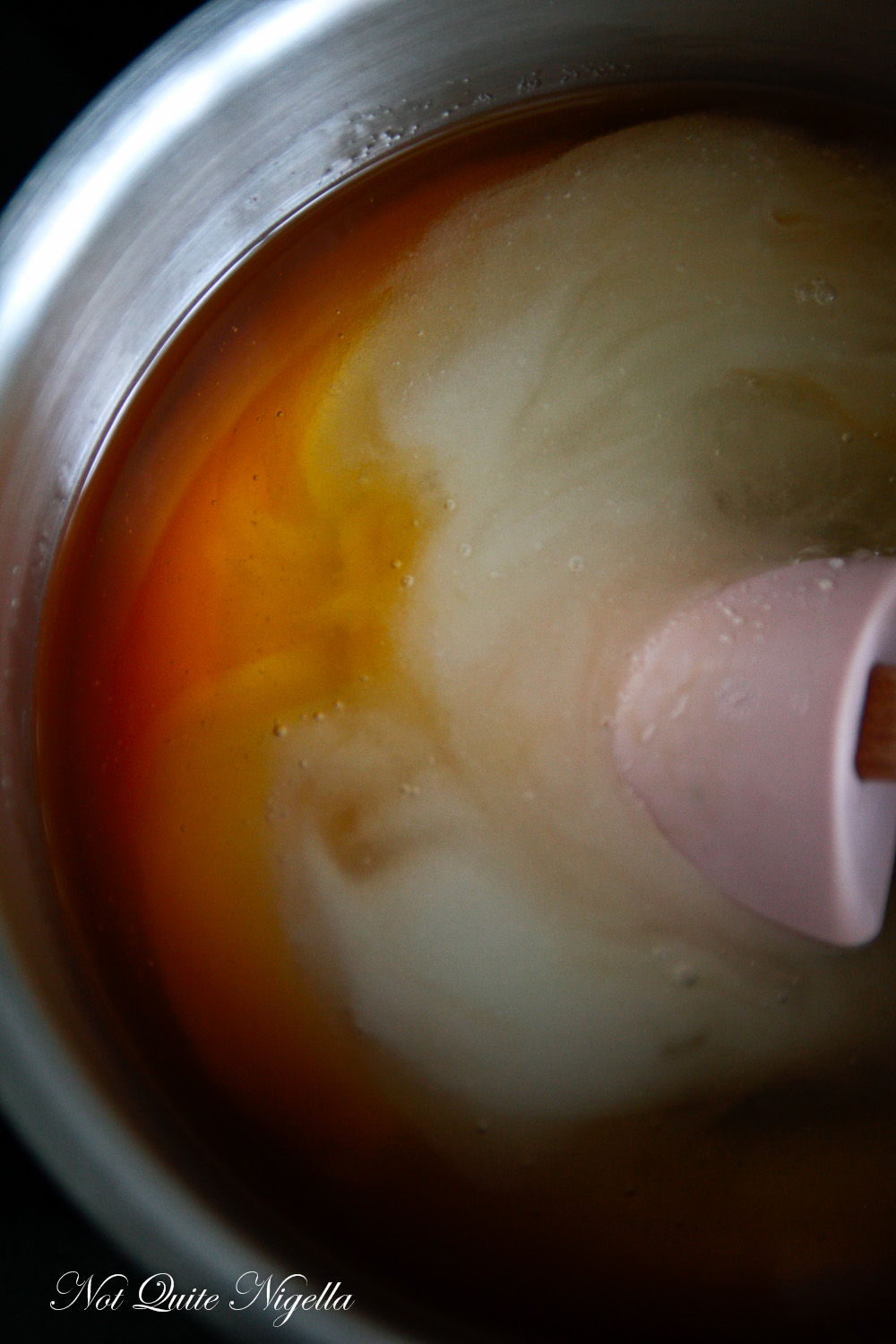 Step 5 - Bring the sugar mixture to a boil and then lower the heat and boil for 3 minutes.

Step 6 - Remove the lid and attach the candy thermometer. Continue to cook uncovered on high heat without stirring until the syrup reaches 290°F/143°C.

Step 8 - Remove the pot from the heat and use tongs to take out the vanilla bean pods.

Step 9 - Slowly pour the hot syrup into the whipping whites by letting it run down the inside of the mixer bowl. Don’t pour it directly on the whites or they may collapse. 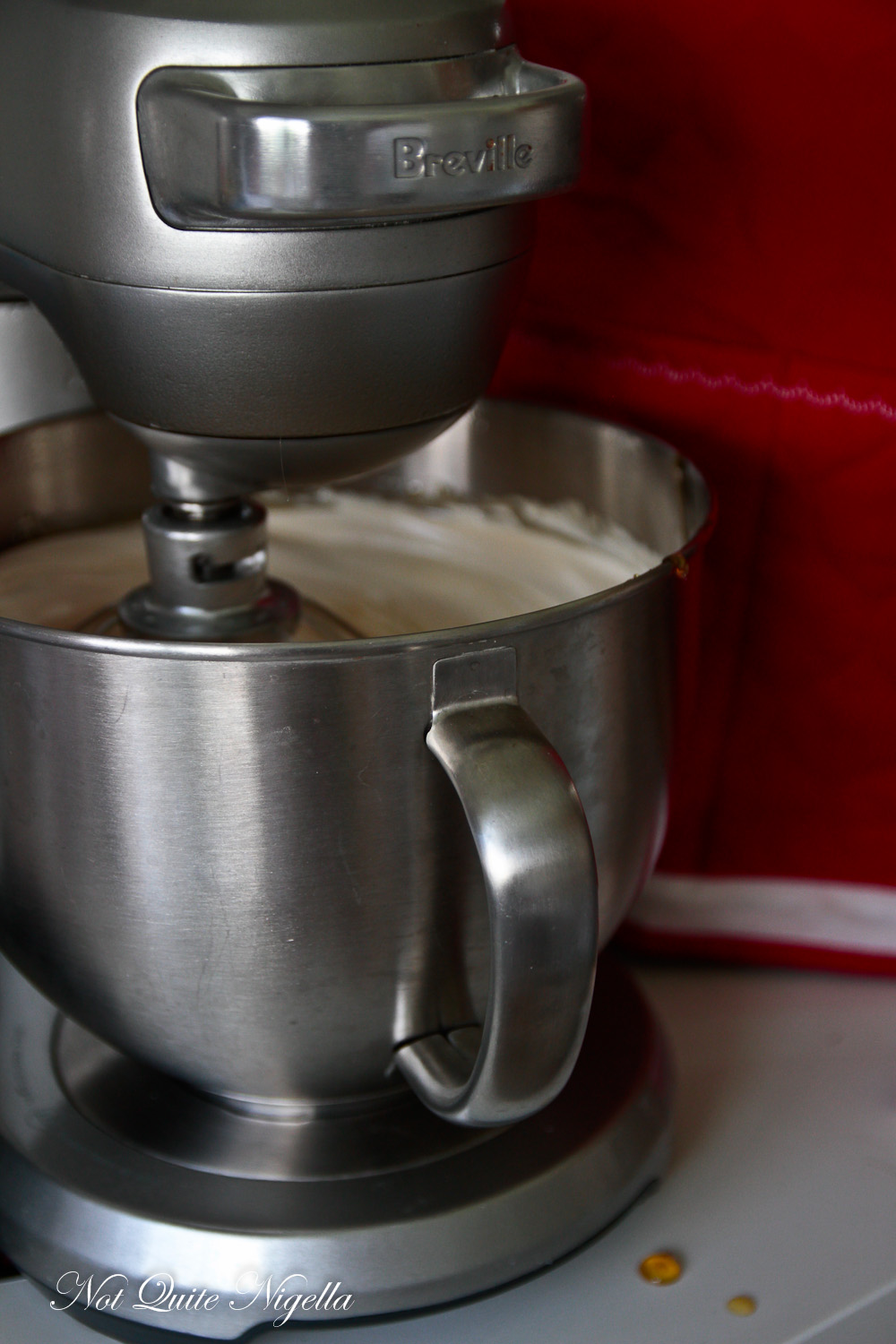 Those drops of syrup were hot and set hard!

Step 11 - Add the cocoa butter and whip JUST until the mixture is smooth again. Do not over mix. If you have a 4.5 quart (4.5 litre) mixer like I do, you may need to initially lower the speed of the mixer while pouring in the cocoa butter as it will try to slop out. 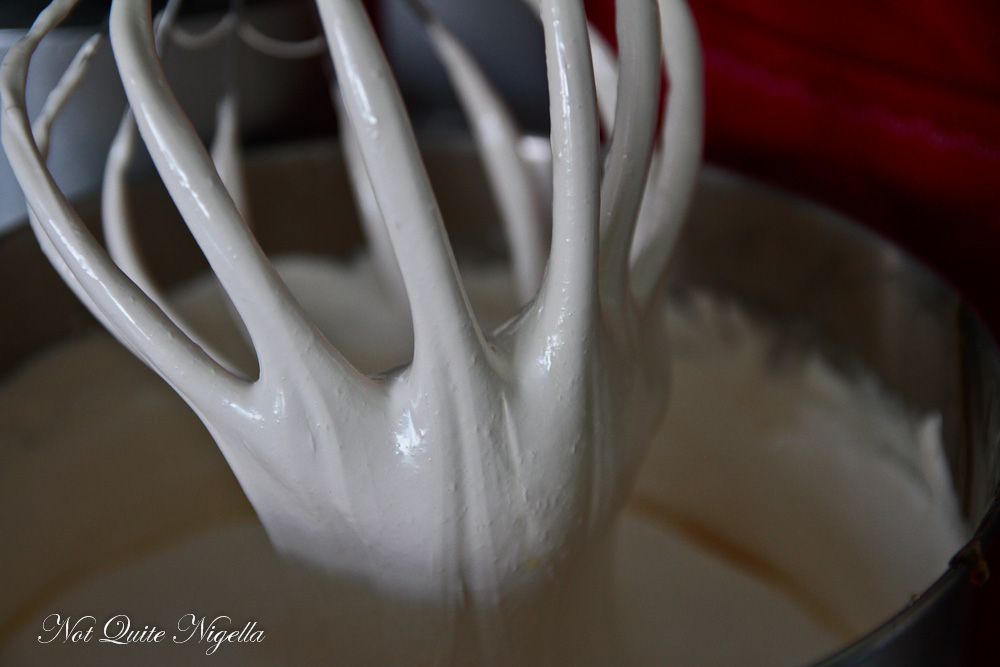 Step 12 - Remove the bowl from the mixer and dump in the hot nuts and fruit from the oven. Mix quickly with a heat-safe spatula until the almonds are evenly distributed. 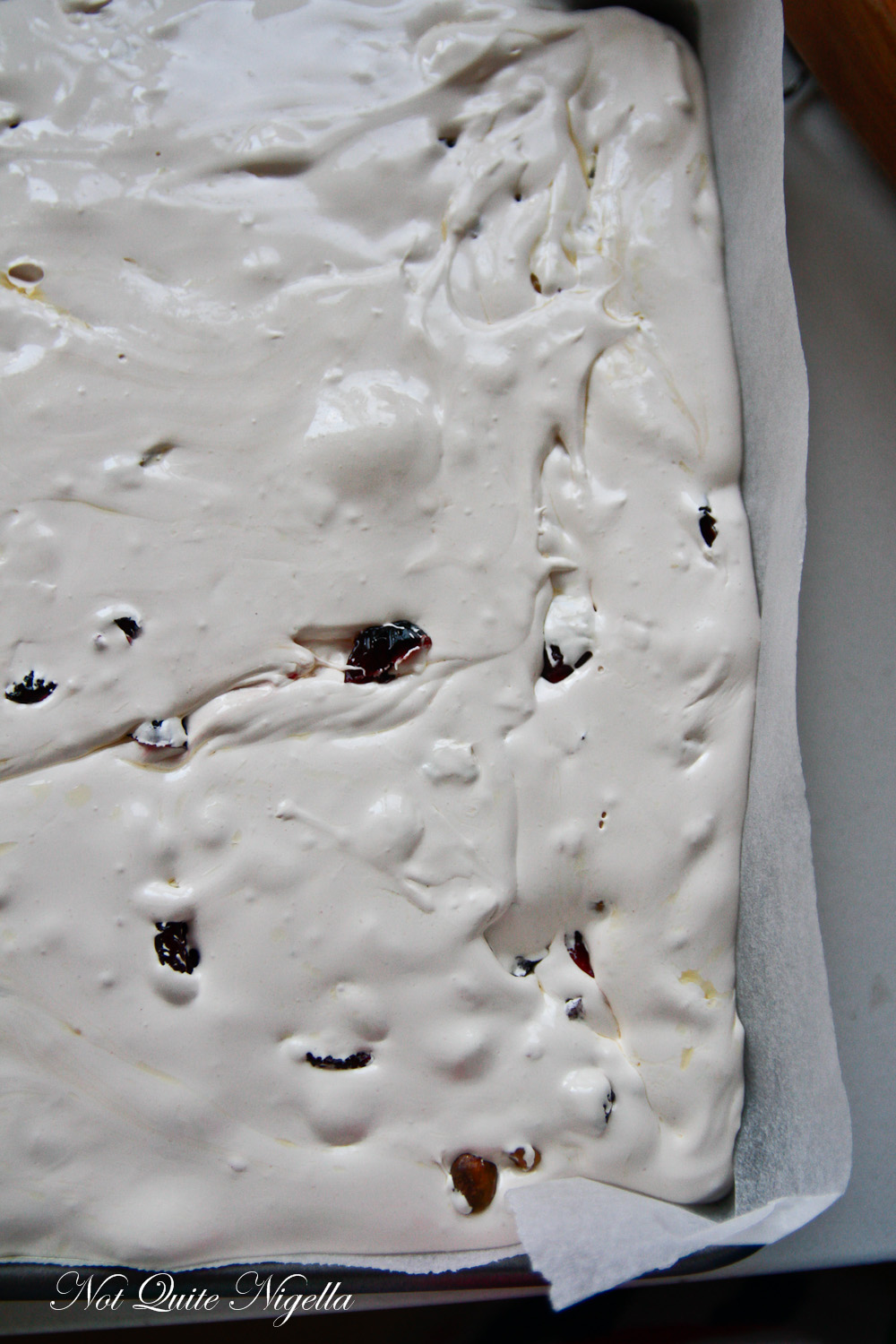 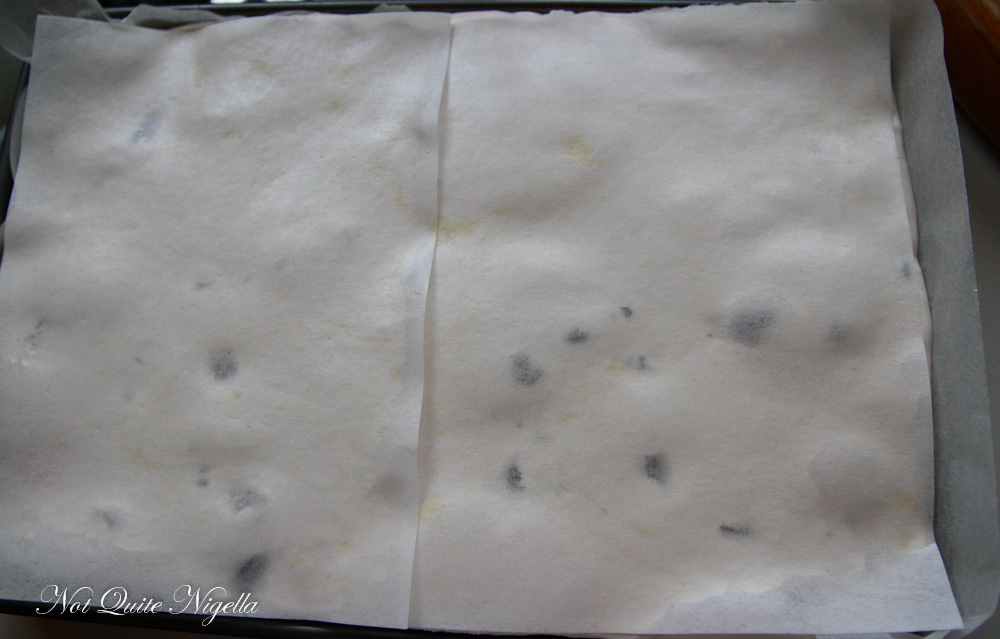 Step 14 - Let the nougat cool at room temperature until just warm to the touch, about 45 minutes. To clean your bowls etc, soak them in very hot water and the sugar will dissolve. With the setting nought, don’t let it go too long or it will be very difficult to get out of the pan and difficult to cut. You want it to still be a little flexible when you remove it but not so soft that it loses its shape.

Step 15 - Pry the nougat out of the pan with a spatula and place it onto a cutting board. Trim the edges and cut the nougat with a hot oiled knife into the size pieces you want.

Step 16 - Wrap the nougat individually or store at room temperature in an airtight container. The texture of the nougat will soften a bit after a few days, especially if you have added dried fruits in with the nuts.