The Dance of The Chocolate Sugar Plum Fairy 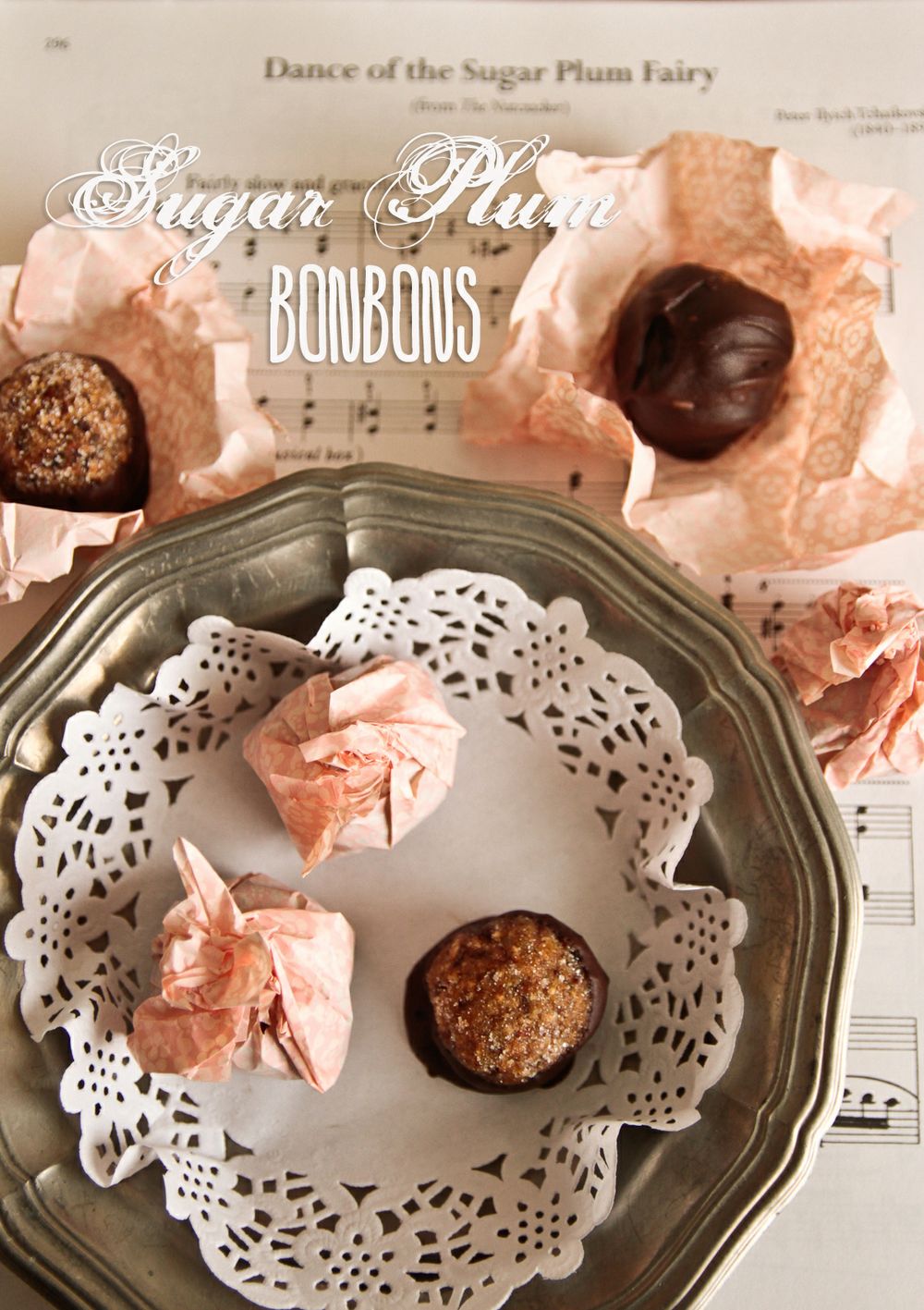 Many moons ago when I was living in Japan, I worked with a Canadian girl called Janet. We got along well, there something quite similar with the Australian and Canadian sensibility. She was also a keen photographer and one day she asked me to be her model. Now I was never going to be model material. At 158 cms I qualify for nothing except child modelling and the problem with that is that I look nothing like a child. But it was exciting for me to be asked by her.

She shot with film and I wore two different outfits, a red cheongsam and a bright orange dress and boots. We took photos in shop windows and locations that she had scouted out. I tried to mimic what I had seem on televisions shows and I was nervous to see how I was doing.

"Oh don't worry, it's very little to do with the model, it's all about the light," she said. 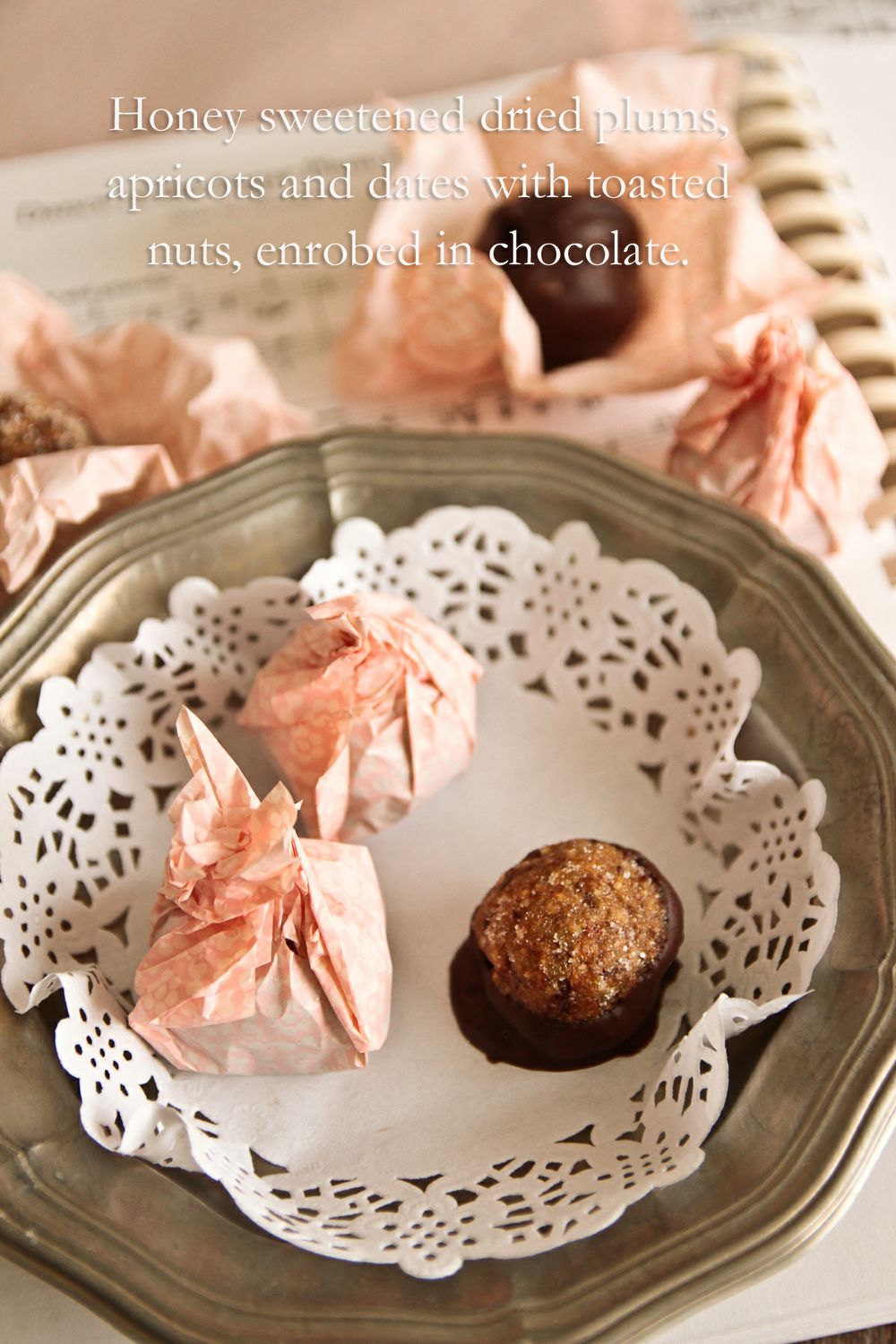 That relieved and confused me. I felt relieved of my duties or at least off the hook in terms if the results,  but really if it want about the model, then why we're some models being paid millions of dollars more than others?

I would dare to argue with her about these sugar plums. There's little to do with the light on these or the photograph. They're just absolutely delightful on their own. What are sugar plums? Well those of us in Australia are currently enjoying a season of these tear drop shaped sweet plums. These along with figs are two things that I always look forward to ever year. The other food called sugar plums are sweet little confections made out of nuts, spiced and dried fruit. These dainty little balls are rolled in sugar and are like a sweet lil' bon bon.

I know that I'm often on the wrong side of crazy. Exhibit a: I bought boxes of sugar plums not even knowing what I would do with them. How could the two of us eat so many? Exhibit B: I decided to dry some of them in the oven to preserve them and then use the dried sugar plums in my own set sugar plum sweet meat confection. 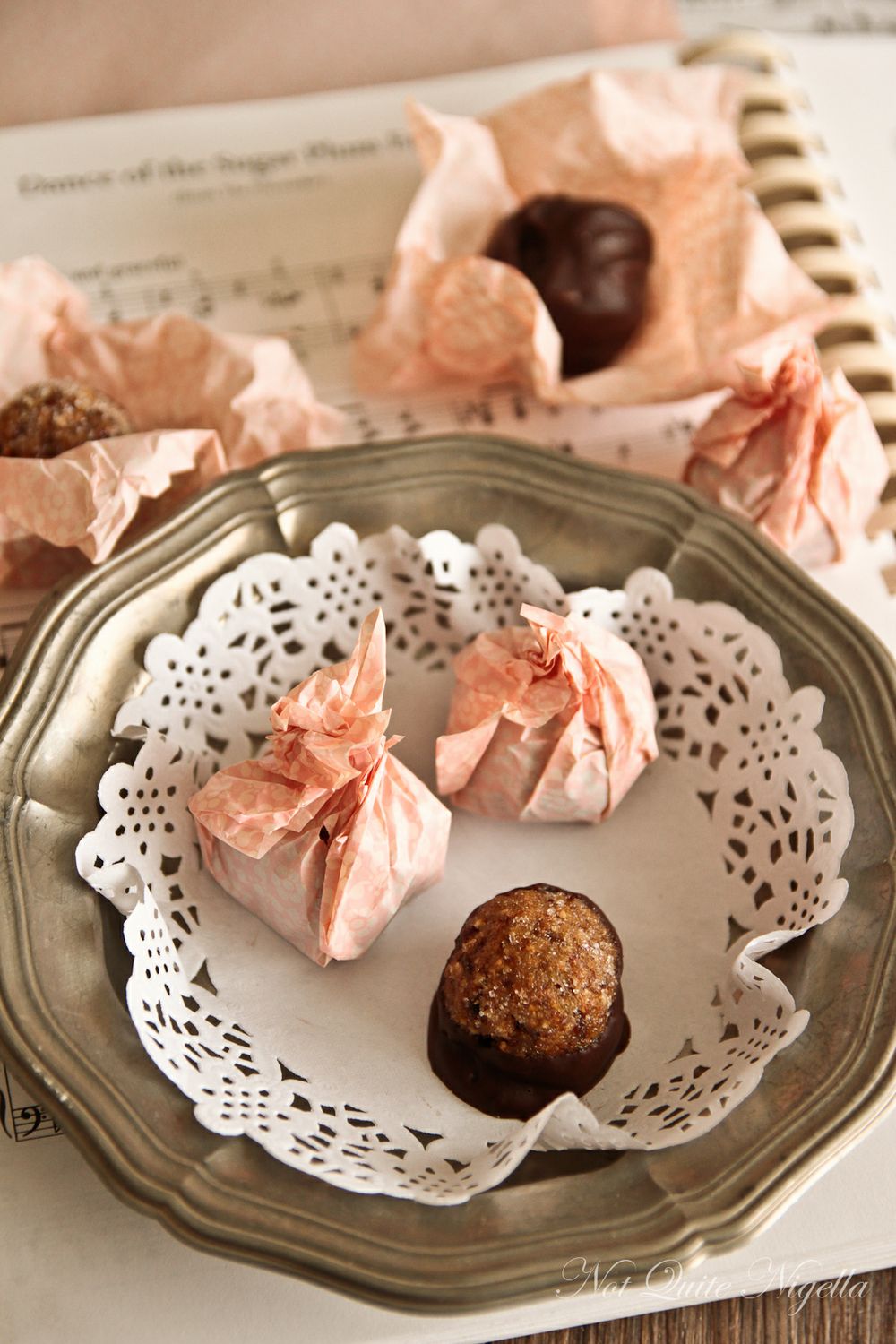 Drying food is entirely possible without the use of a food dehydrator. All you need is an oven and patience. I halved the plums, removed the seeds and soaked them in. A 50/50 mixture of honey and water. I baked these halves cut side up so that the honeyed plum juices would concentrate in the fruit and 10 hours later, the next morning, I had what had these the most delectable dried fruit I had ever eaten.

After setting some aside for the sugar plum balls I simply ate the rest while standing in the kitchen looking out the window wishing I had dried more plums. After that the balls were easy. There was some toasting of the nuts and spices and these along with the dried fruit were placed in a food processor. I rolled these into balls and then the sugar. But if you don't want to make your own sugar plums, please don't feel compelled to follow my time consuming example, you can of course use bought pitted prunes in their place.

The last touch before wrapping these in patterned tissue paper was to dip these I'm dark chocolate enrobing them partially in the chocolate. I loved them this way although Mr NQN preferred them just in the sugar. Either way you have these,  promise that you won't think that they involve a sleight of trick of light.

So tell me Dear Reader, do you think being a model is all that it is cracked up to be? And do you love or hate having your photo taken? 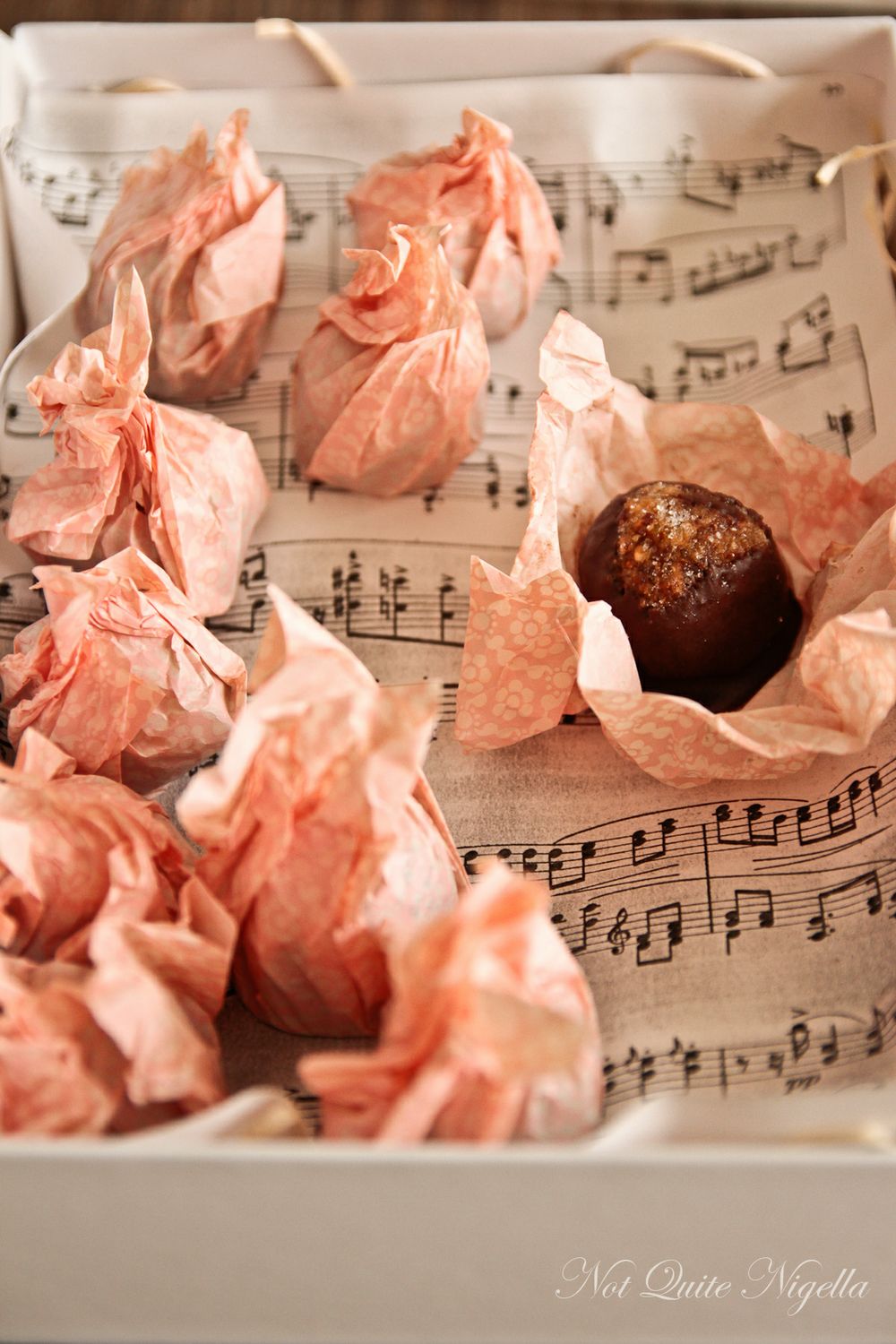 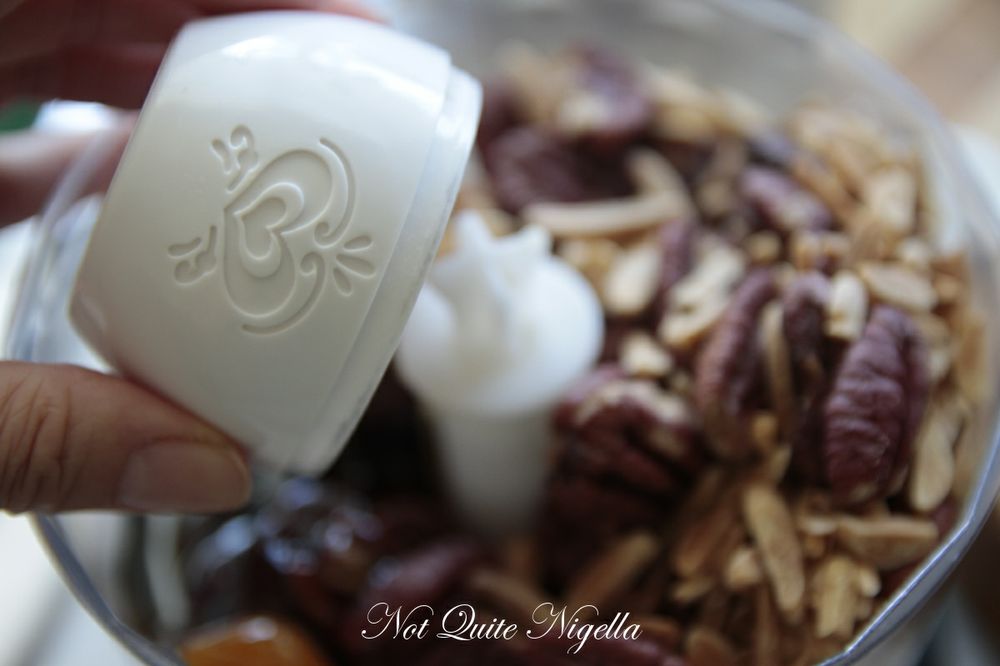 Step 2 - In a good processor place the nuts and the remaining ingredients except for the white sugar and chocolate and process until fine in texture. 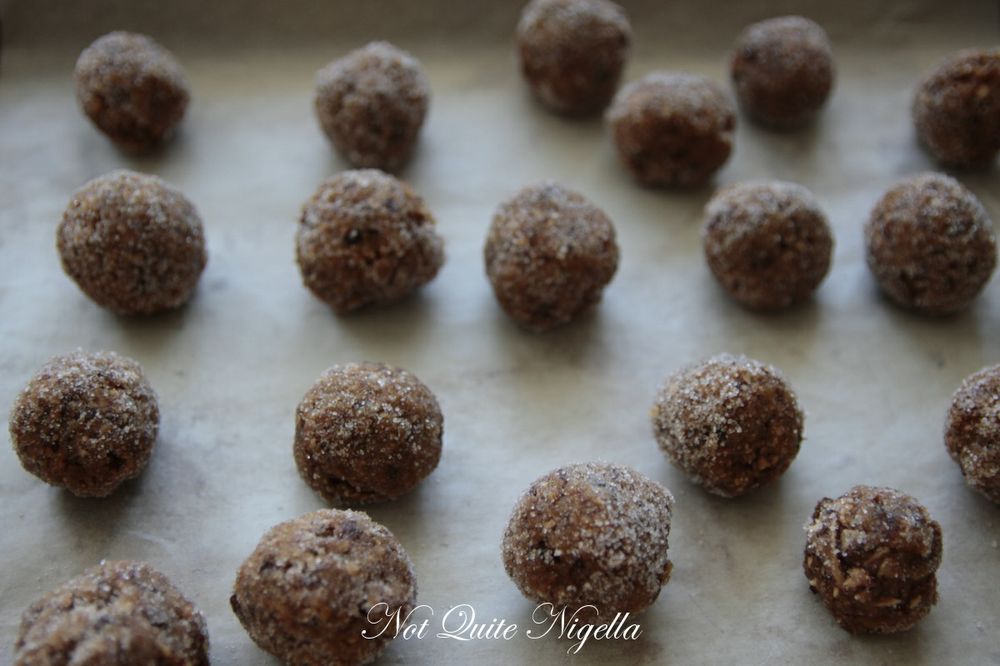 Step 3 - Place the white sugar on a plate and with damp hands, roll the mixture into small balls and roll them in the sugar.

4.  Melt the chocolate and copha or coconut oil in a double boiler (a heatproof bowl fitted over a saucepan of simmering water ensuring that the bottom of the bowl doesnt touch the water) or in the microwave on 50% power with 60 second bursts, stirring between bursts. 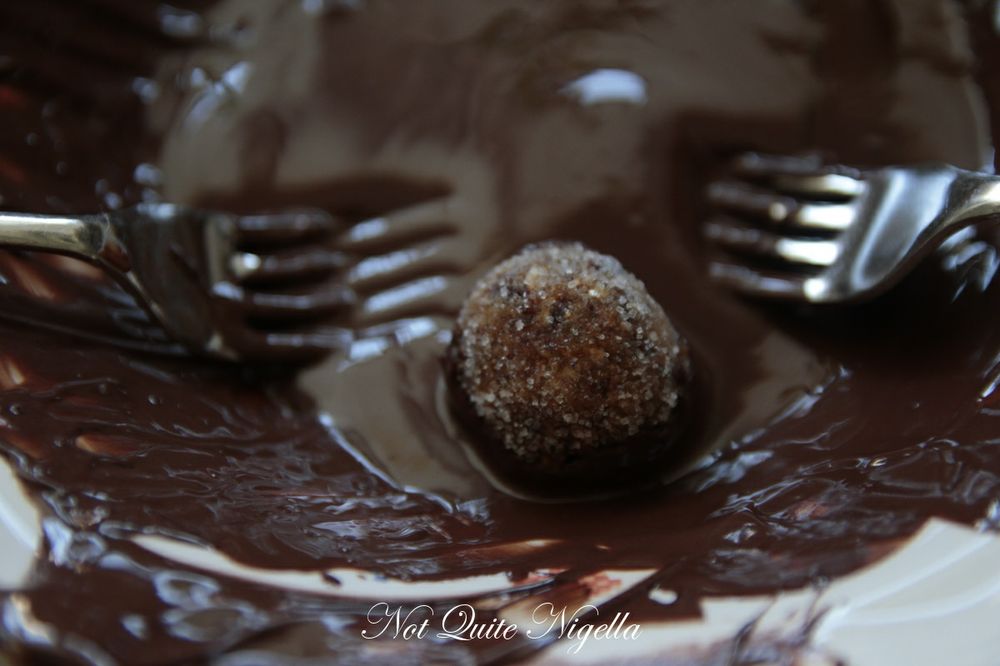 Step 5 - Line a tray with parchment. Using two forks, gently lift a sugar plum into the chocolate and gently move it around so that the bottom and sides are covered in chocolate. you can also dip the whole sugar plum sweet inside the chocolate. Allow the excess chocolate to drip from the sugar plum and then place on the lined tray. Allow to set (it's currently a little warm so I placed these in the fridge). Wrap in tissue paper. 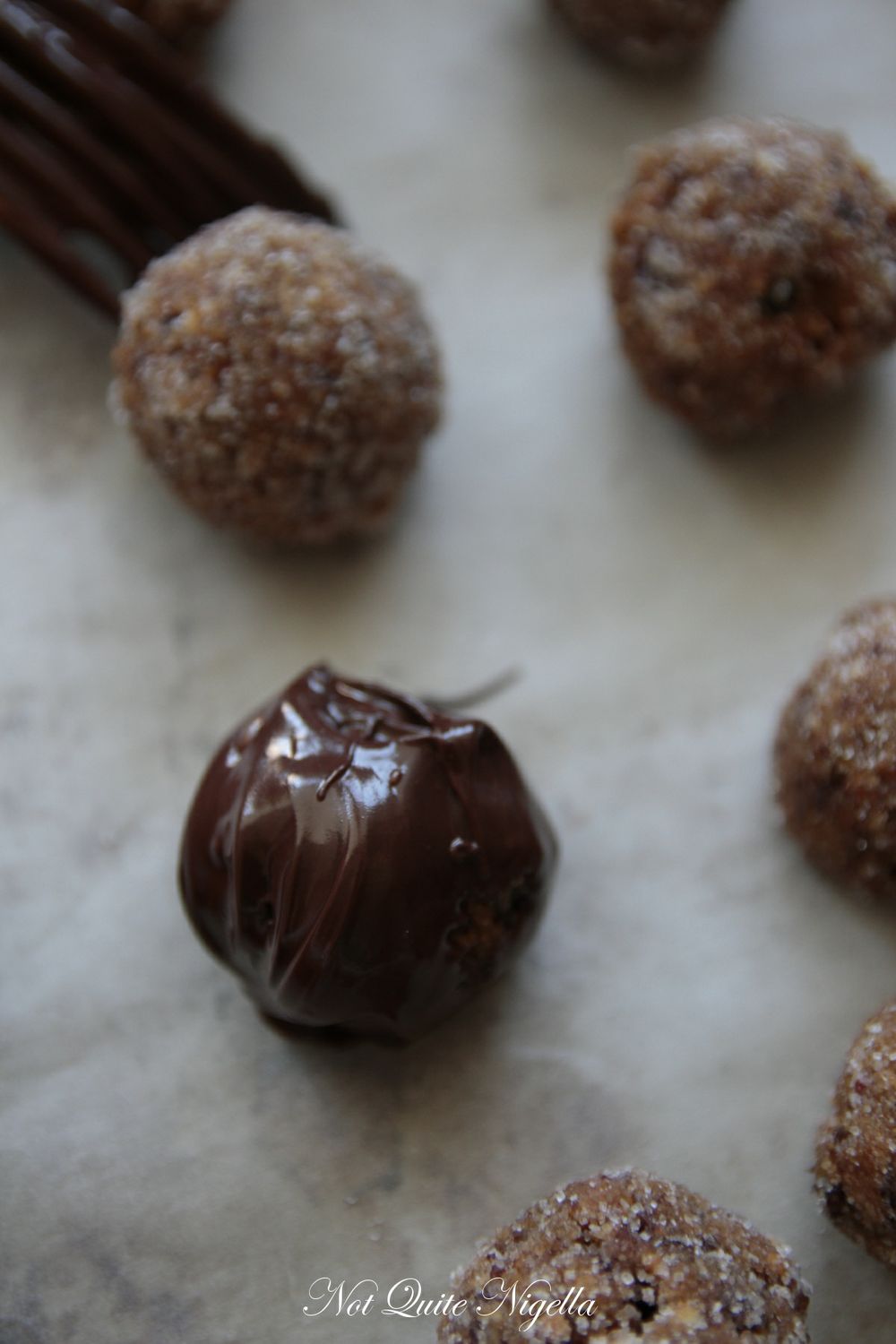 Note: If you are not coating these in chocolate and aren't serving these straight away you can just roll them into balls and allow them to air dry overnight and then store in an airtight container for about a month. Roll them in the sugar before you serve them. 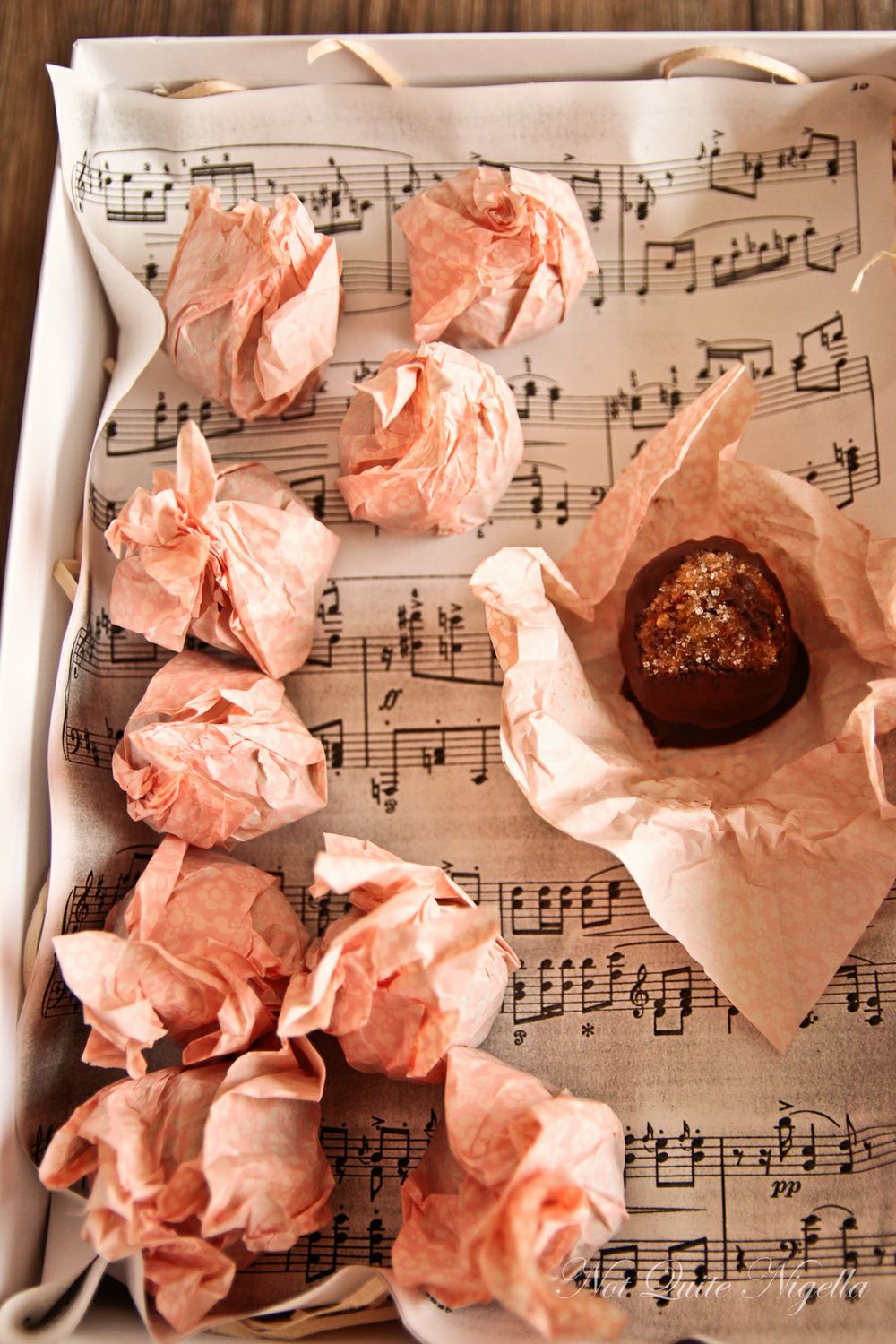