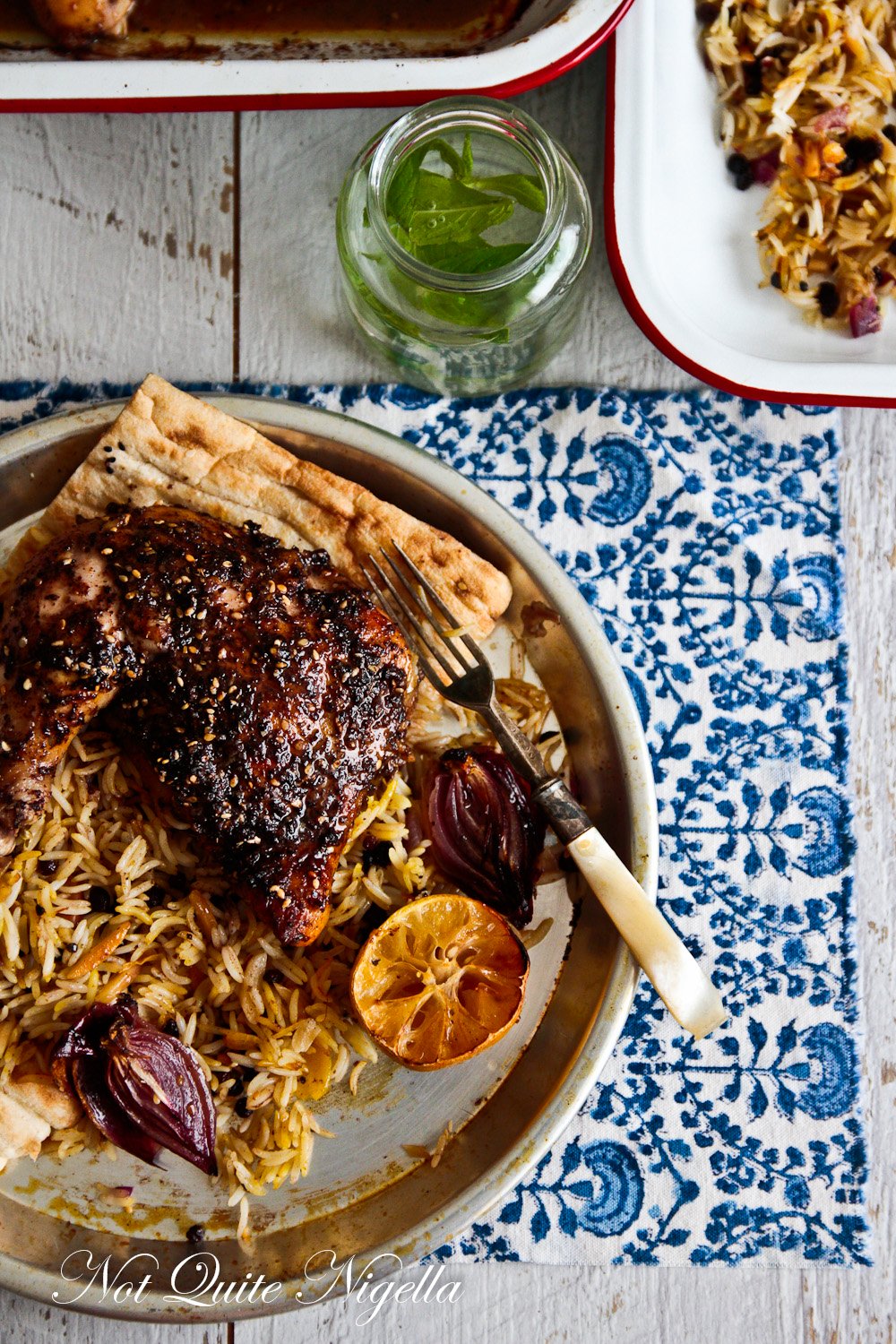 I may not be an expert in many things but I know a few things for certain.

Looking at scary people's wikipedia pages before you're about to go to sleep isn't a good idea. Case in point, this one.

Then trying to bring levity to counteract nightmares, looking at funny photos doesn't in fact make you tired. You end up laughing and staying awake. 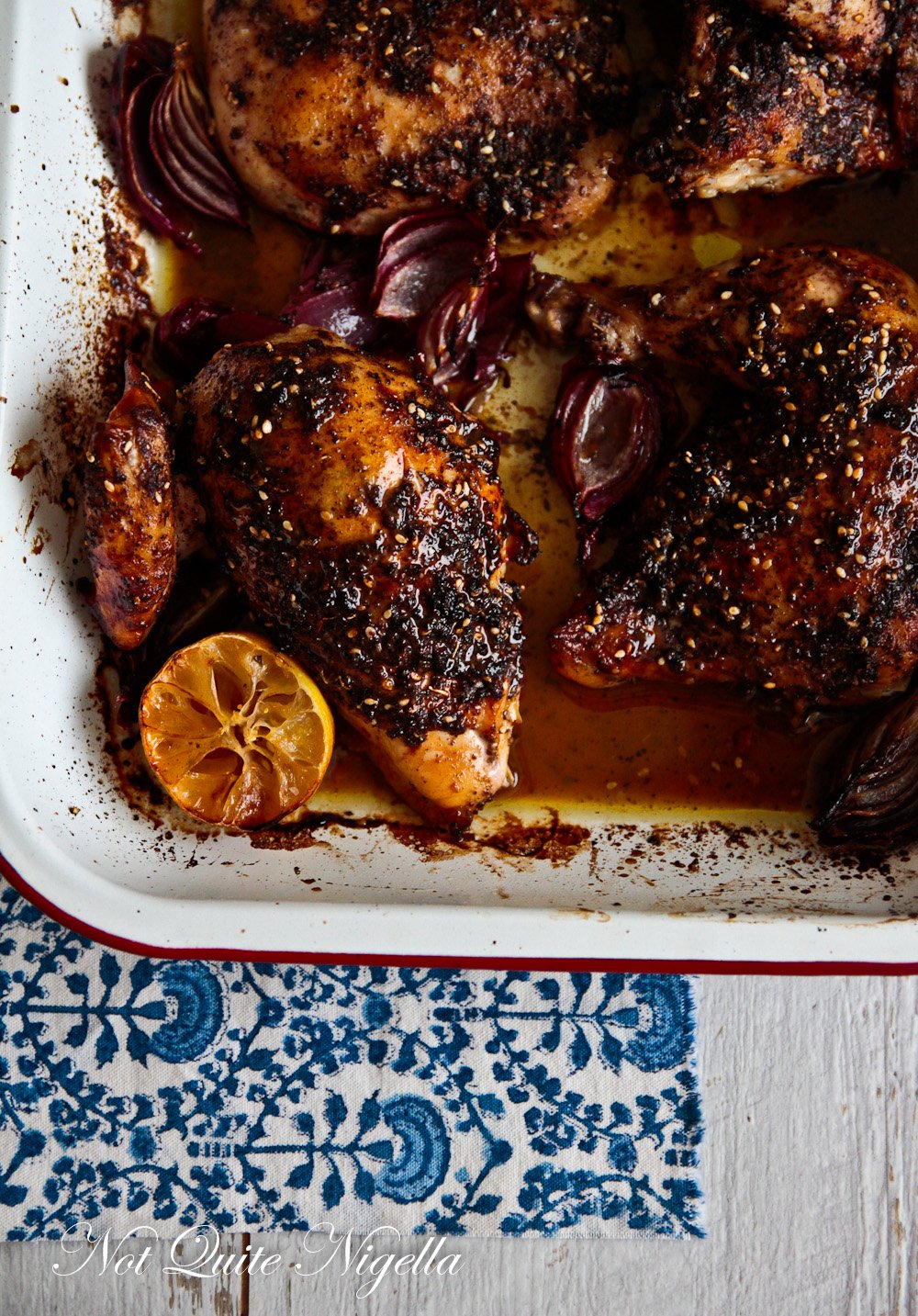 It's a bad idea the next day to make the most succulent spice roast chicken you've ever eaten when you're meant to be eating salad because you have a video shoot in a couple of days.

But I do know that you really, really need to make this chicken. Really. 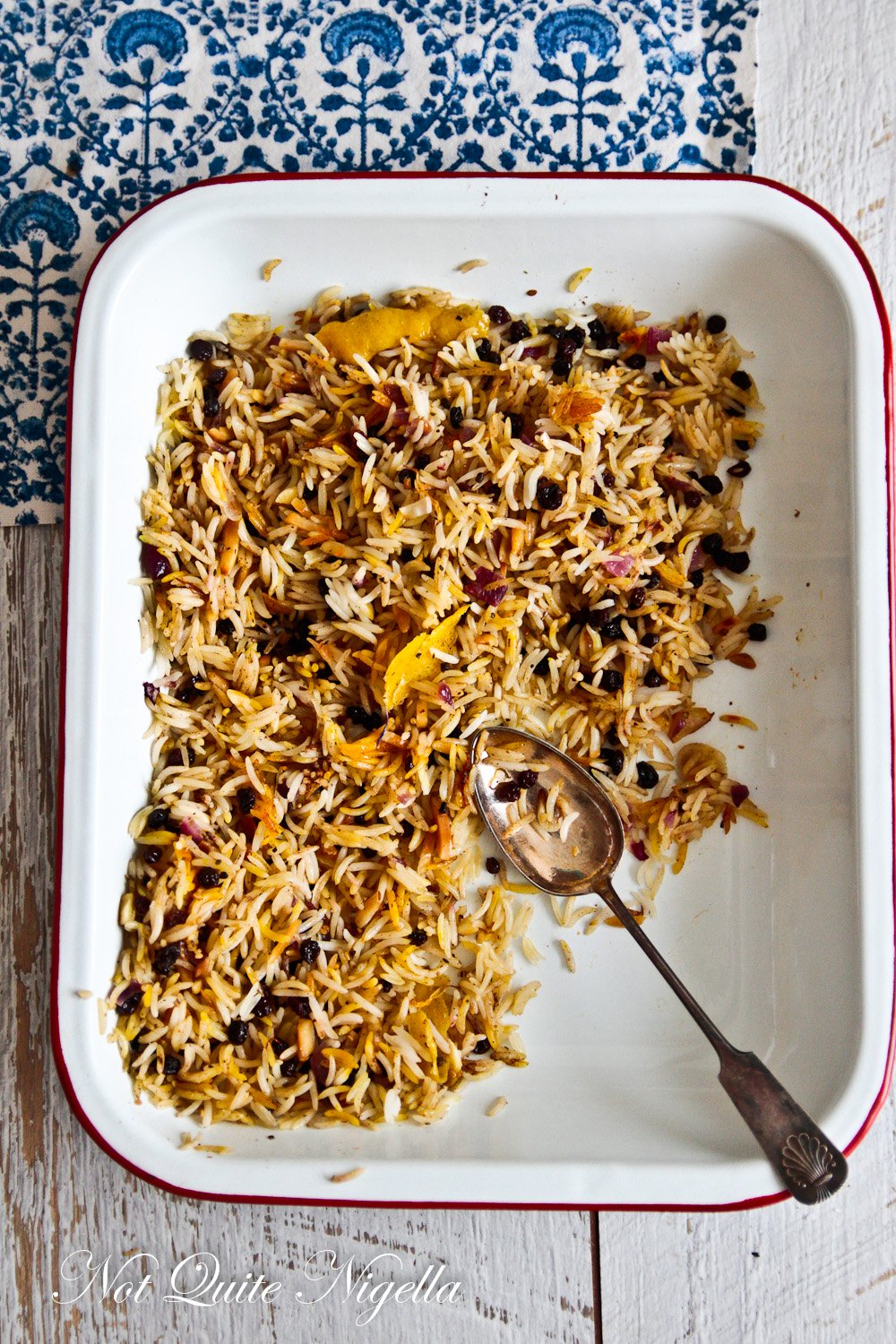 This was really almost by accident. I go through my spice cupboards every now and then and I realised that my sumac was close to expiring. I remembered a chicken dish I had eaten years ago called Musakhan, a Palestinian chicken dish where a chicken is coated in an aromatic spice rub including sumac, allspice and cinnamon and decided to make a version of it.

Masakhan is usually baked on bread and while I had some Afghan bread on hand I wanted to serve it with rice. I used a similar spice mix in both and next time, because there definitely will be a next time for this, I'll bake the chicken on top of the Afghan bread or Lebanese bread so that it soaks up the juices nicely. Sumac is a dark blood red coloured spice made from sumac berries that grow in the Middle East and Sicily. It's one of the most versatile spices and it's one of my favourites because it has a measured tartness similar to lemons but more restrained.

And you know for all of this salad talk, the chicken by itself isn't too bad as far as salad garnishes go. The dark meat pieces are generally going to be moist but what I loved was that the breast was too, even towards the ends which can get dry. The only problem was that this chicken was so amazingly tender and perfectly seasoned that I polished off a quarter without any sort of guilt or reasoning before sniffing around for another piece.

So tell me Dear Reader, what do you do right before you go to sleep? Do you watch television or read? 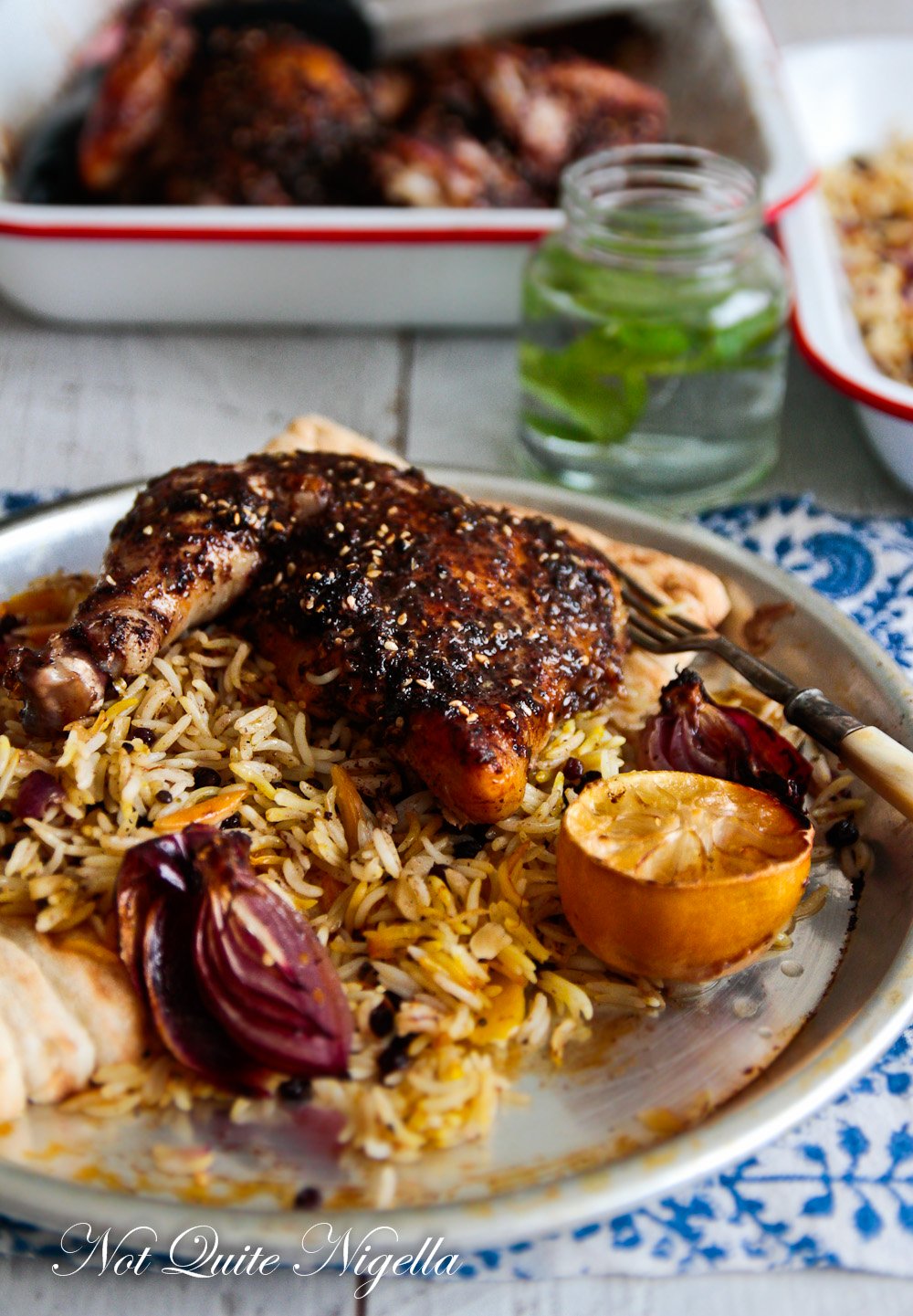 *Buyer's tip: Sumac is found at supermarkets in the spice aisle. Za'atar is found in spice shops and is a mixture of sumac, sesame seeds, marjoram, thyme, oregano and salt. *

Step 1 - I like to dry brine the chicken the night before. Wash the chicken and then pat dry with paper towels. Season the chicken generously with salt and leave breast side up uncovered in the fridge. 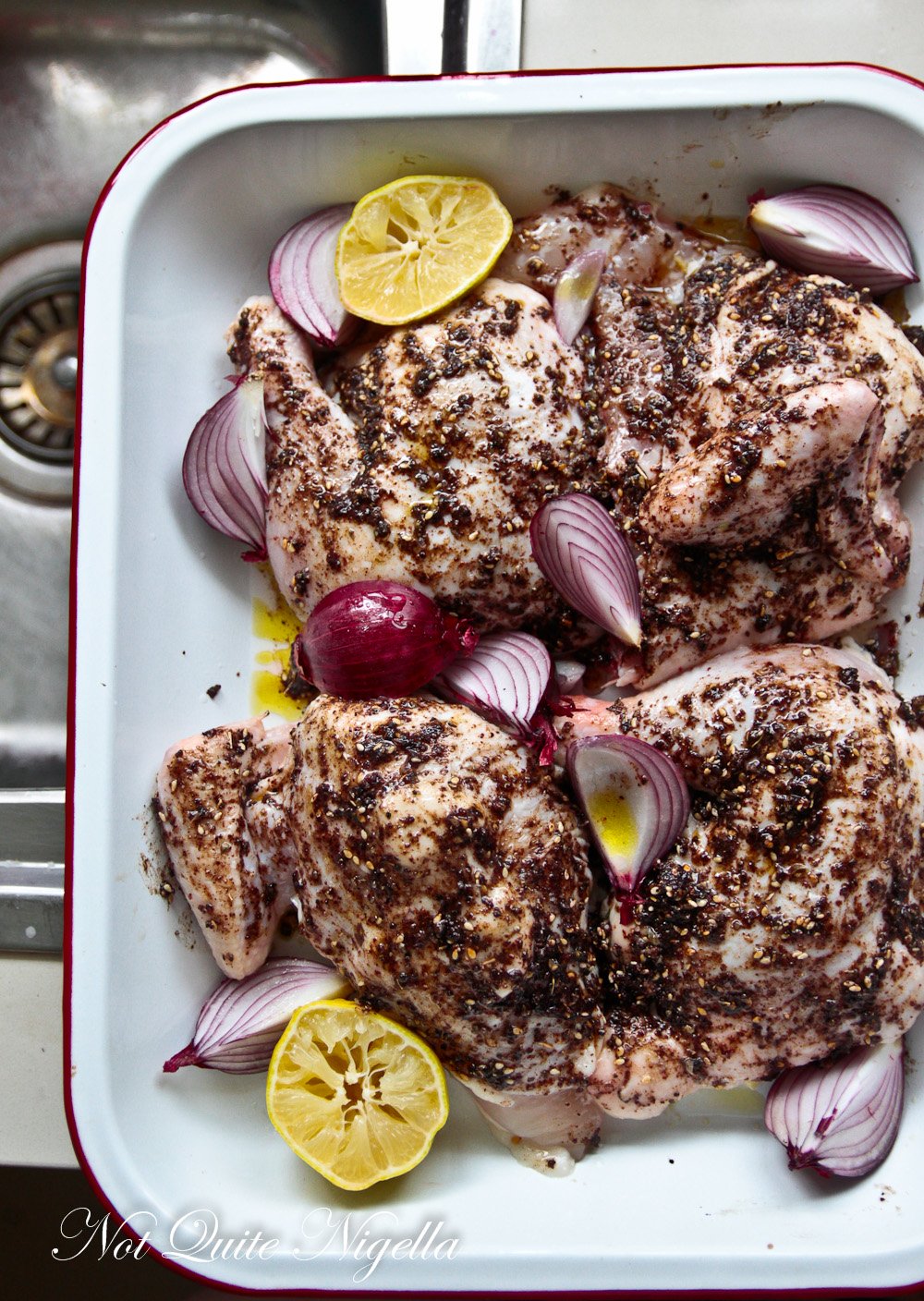 Step 2 - The next day take the chicken out of the fridge. Mix the olive oil, sumac, za'atar, salt, allspice and cinnamon in a bowl and smear the mix over the chicken. Squeeze the juice from the lemon all over the chicken and place the lemons on the tray along with the onions. Drizzle some oil on the onions and let the whole tray sit for about 30-40 minutes for the chill comes off the chicken. Meanwhile preheat the oven to 200C/400F. When the chicken is ready, place in the oven. Bake for 40-50 minutes basting 2-3 times in the process with the juices. I like it when chicken is well done and the drumsticks start to pull away from the bone at the base but it still remains moist. 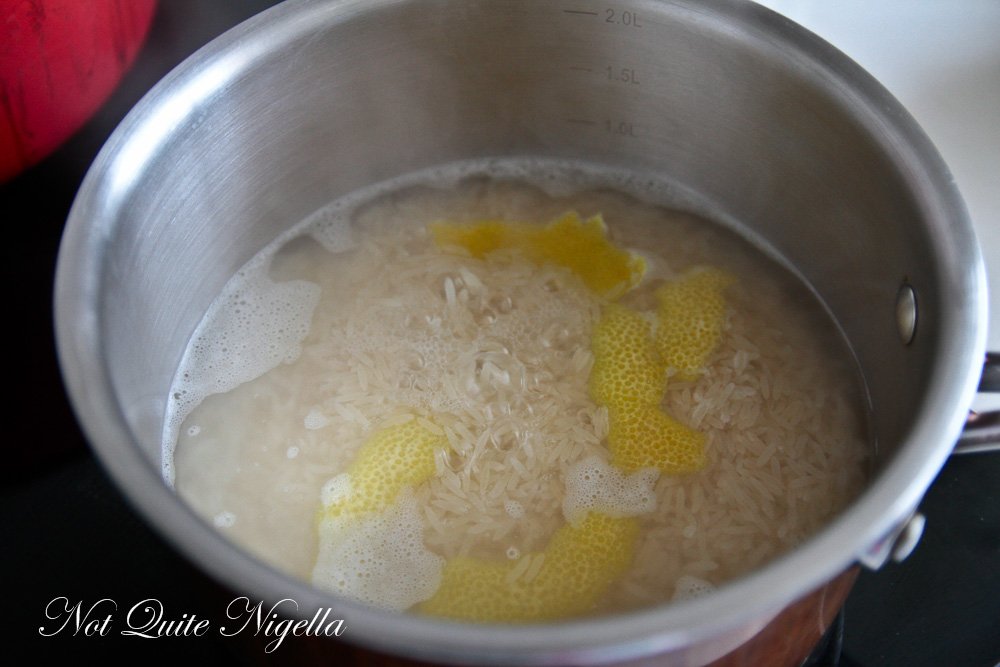 I used Valencia oranges so the zest looks yellow

Step 3 - While the chicken is cooking, make the rice. Rinse the rice 2-3 times until the water runs clear. Then add hot water and the orange zest pieces to the rice and bring to the boil with the lid on. Reduce temperature down to low and still with the lid on, steam the rice for 5 minutes. 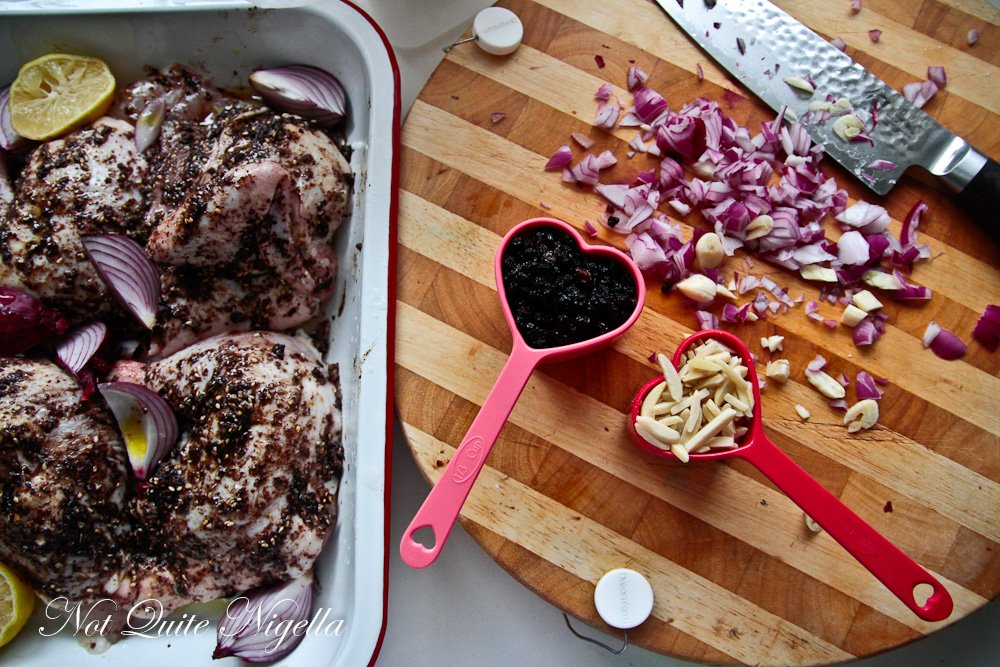 Step 4 - heat a frypan on medium heat and fry the almonds until golden. Remove from pan. Add some oil and saute onion and garlic until soft and fragrant. Add the currants and cooked rice and then sprinkle the allspice, cardamom and cinnamon on the rice along with the saffron with the strands and saffron infused water. Add the tablespoon of butter and stir until the rice is cooked and the spices are evenly distributed. Serve with the chicken.