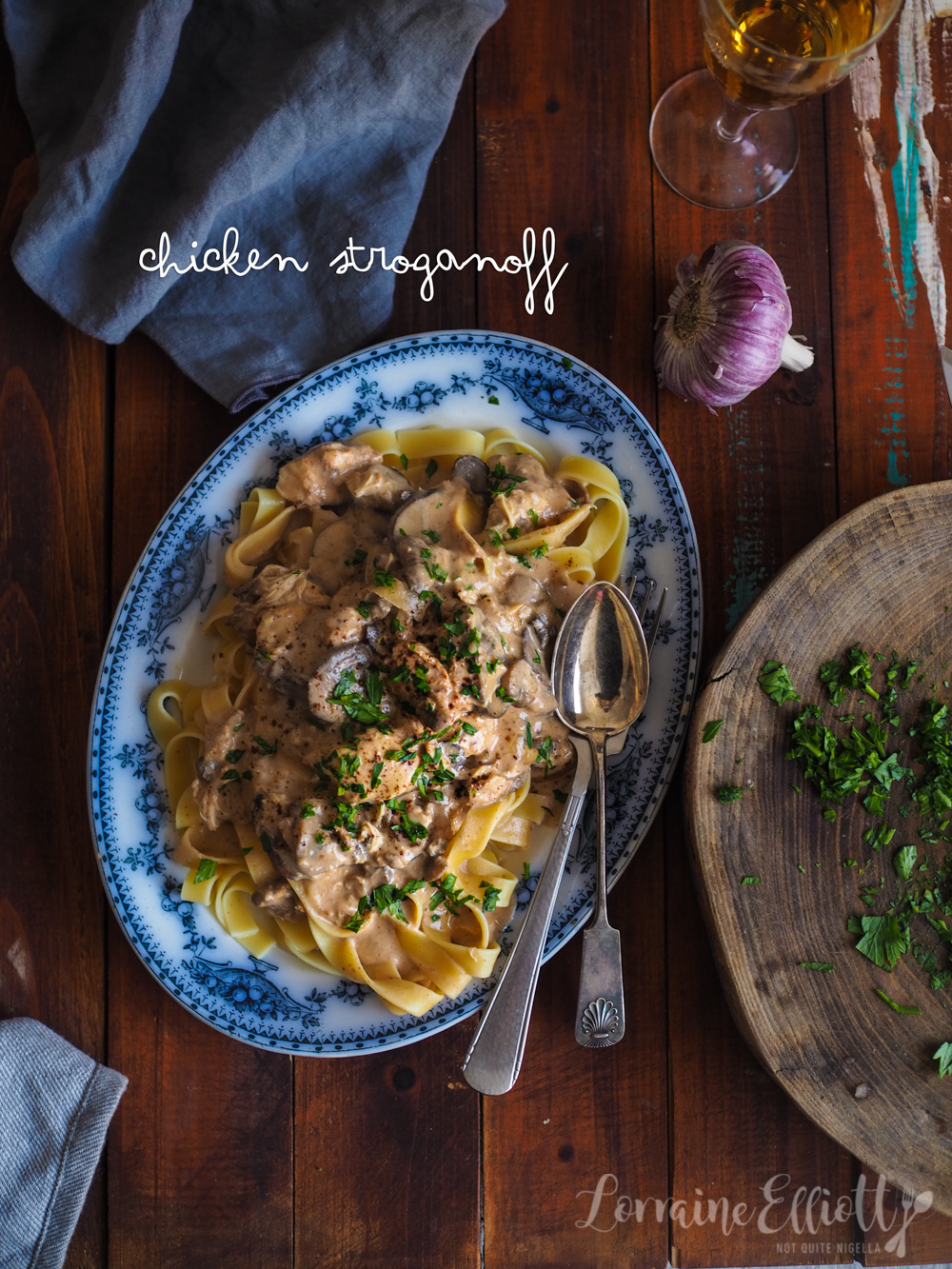 This creamy, delicious chicken stroganoff is a lighter version of classic Veal or Beef Stroganoff using chicken. This version is easy to make in either a slow cooker, pressure cooker or instant pot or on the stovetop!

Stroganoff is a classic Russian dish where the sauce is enriched with sour cream (smetana). Some say that it was invented by a French chef Charles Brière who submitted to a recipe competition in 1891 where it was named after his employer Count Pavel Stroganoff. Larousse Gastronomique, the encyclopedia of French cooking named him as the inventor but others point out that it was an adaption of an already known Russian recipe called Govjadina po-strogonovski, s gorchitseju that featured in a classic Russian cookbook "A Gift to Young Housewives" by Elena Molokhovets. The only difference is that there were no onions or mushrooms in this dish. Nowadays there are versions of stroganoff all over the world tailored to each country's specific likes - in Japan it is served over rice, in Finland they used diced pickles and in Australia it is served with rice or egg noodles while it is served with the latter in North America. It is usually made with beef but in this case I use chicken just for a lighter option. 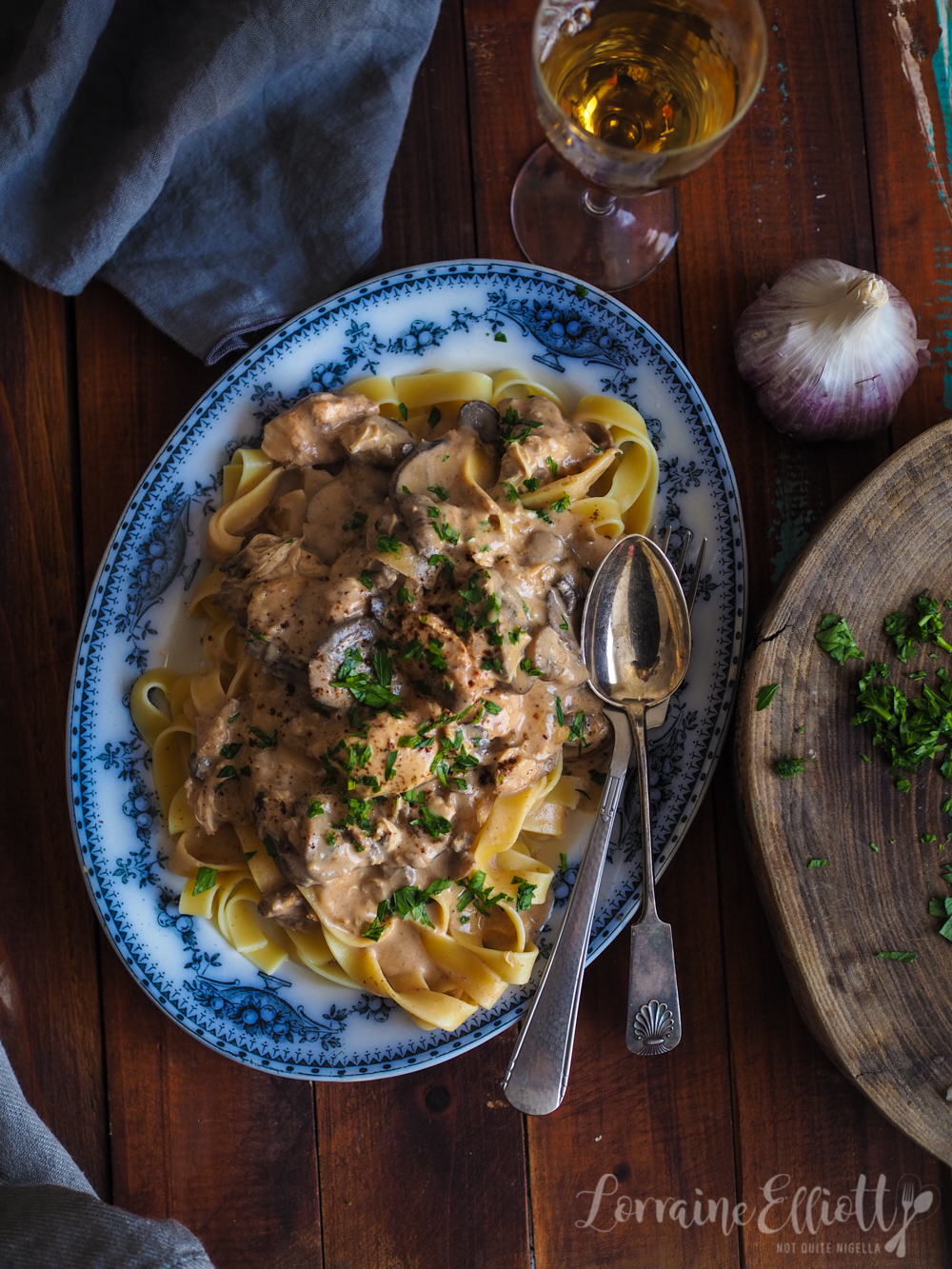 Stroganoff is one of the best recipes to make in a slow cooker-you literally just put everything in the pot and leave it. It can take 4 hours on high or 6 hours on low and you just stir in the sour cream at the end. This version uses sweet paprika, stock, brandy or white wine, tomato paste, mustard and herbs. The result is a gorgeously rich but nuanced sauce that will ward off any winter blues. 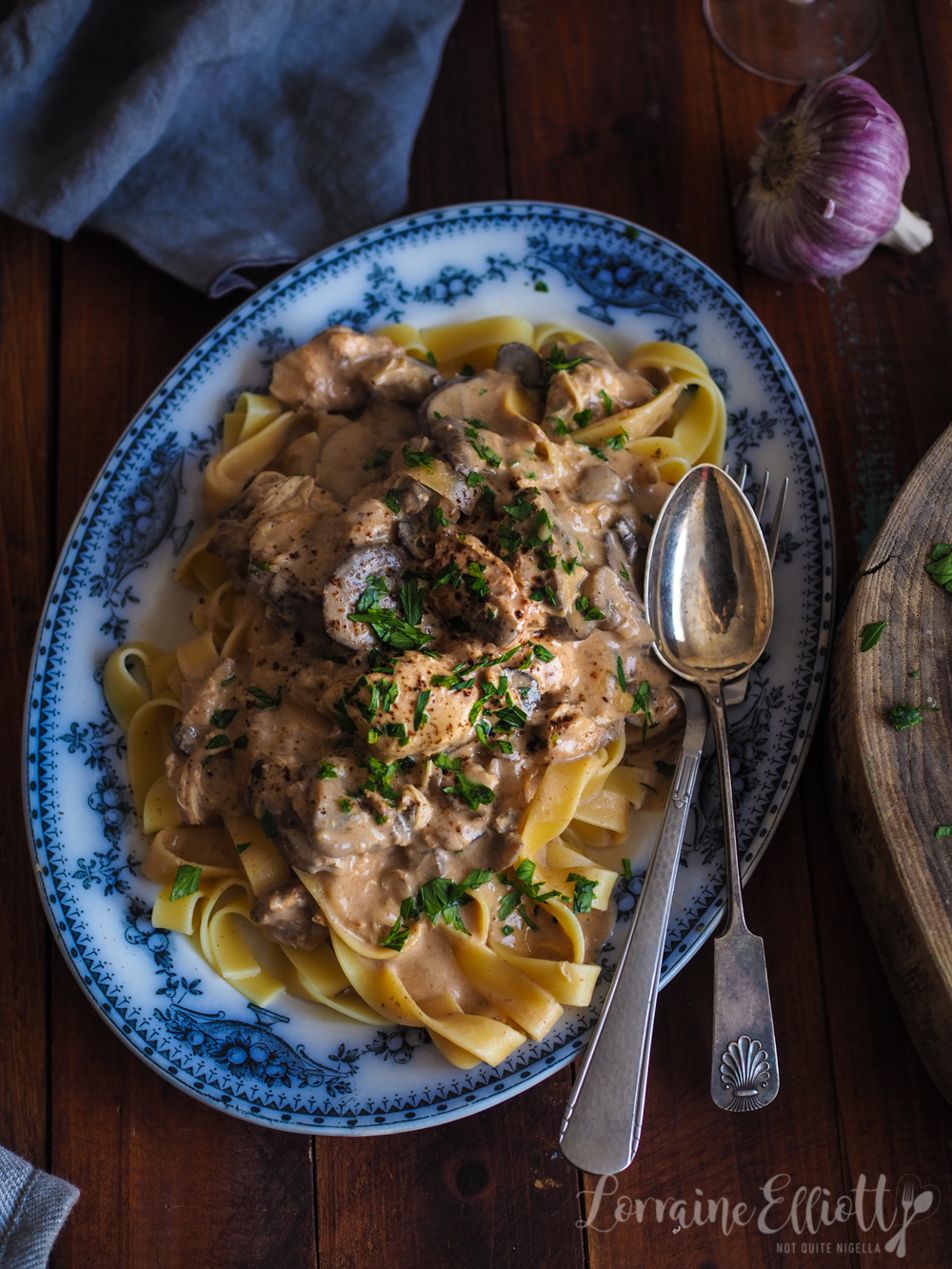 Speaking of winter blues, cohabiting during COVID can be stressful especially if you are both living and working together in the one house so I thought I'd share some cohabitation tips on how to live with your spouse during COVID without wanting to kill each other. Only because I found these tips really useful myself!

Ivy's tip was that one person has to leave the house at least once a day, even if it's only for a walk or to go sit in the car.

Another friend suggested getting a shared calendar because women often find themselves reminding their spouse of their plans and then it feels like you're parenting them which is a great idea (and something that I absolutely hate doing).

Valentina who has been married for ages said, "The only thing I can think of is we have our own spaces. During the working week he is upstairs in the office and I hang downstairs. And we have movie night at home."

Valentina's daughter Katie's advice was, "Sam and I took up our gardening project and he even got into Pilates so I'd say finding a hobby together or trying to enjoy a hobby together that gives you endorphins." 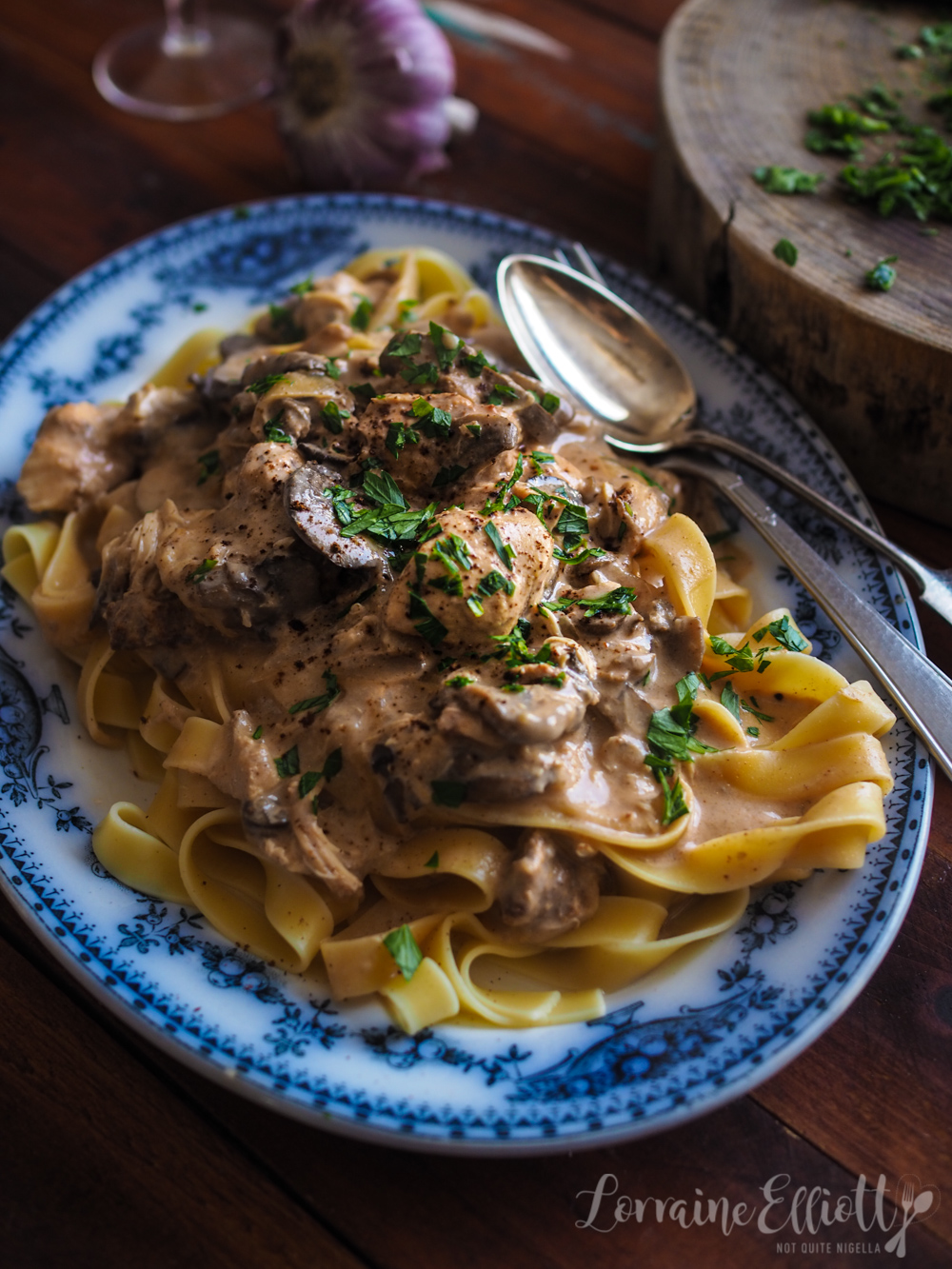 And my tip has to do with sleeping arrangements: get separate quilts. Quilts are never big enough, especially when it's cold and Mr NQN would always steal the quilt and then accuse me of stealing it. Then one day he bought a weighted blanket and I had a king sized quilt all to myself. And we never argued about quilts ever again! Also I found that when I was in Copenhagen, the beds had two separate quilts so it's a thing!

So tell me Dear Reader, what are your cohabitation tips? Do you prefer slow cookers, pressure cookers or regular stovetop pots? 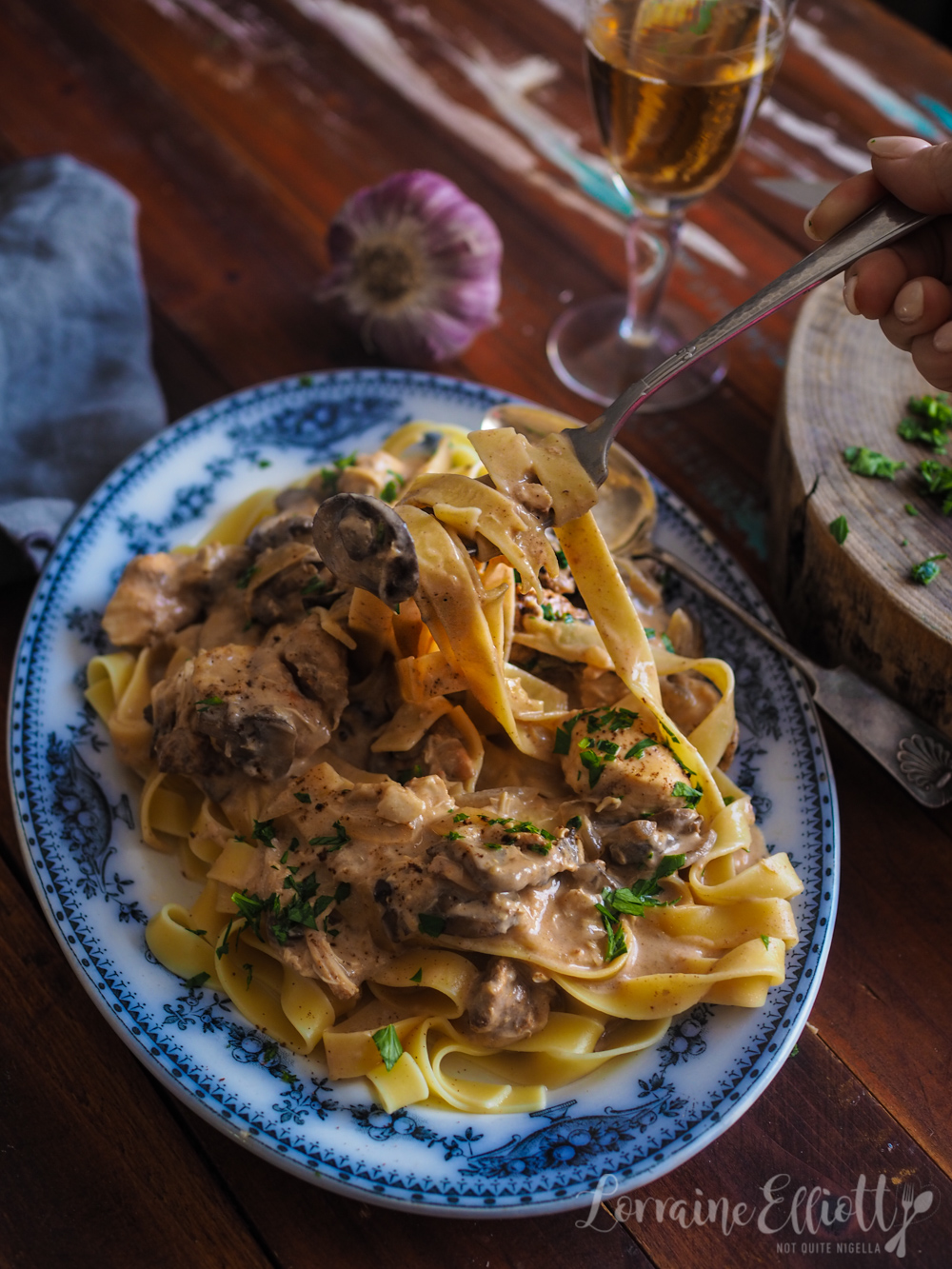 Slow cooker directions: Place the chicken, onion, garlic, chicken stock, wine, mushrooms, tomato paste, Worcestershire sauce, paprika, mustard and bay leaf in the slow cooker and set to 4 hours on high. It will seem like there isn't enough liquid but the mushrooms also release some liquid. After the time is up, add the sour cream and cook for another 30 minutes and season with salt and pepper. If you would like this thickened further, mix in the cornflour mixture to thicken up the sauce. Serve with pappardelle pasta. 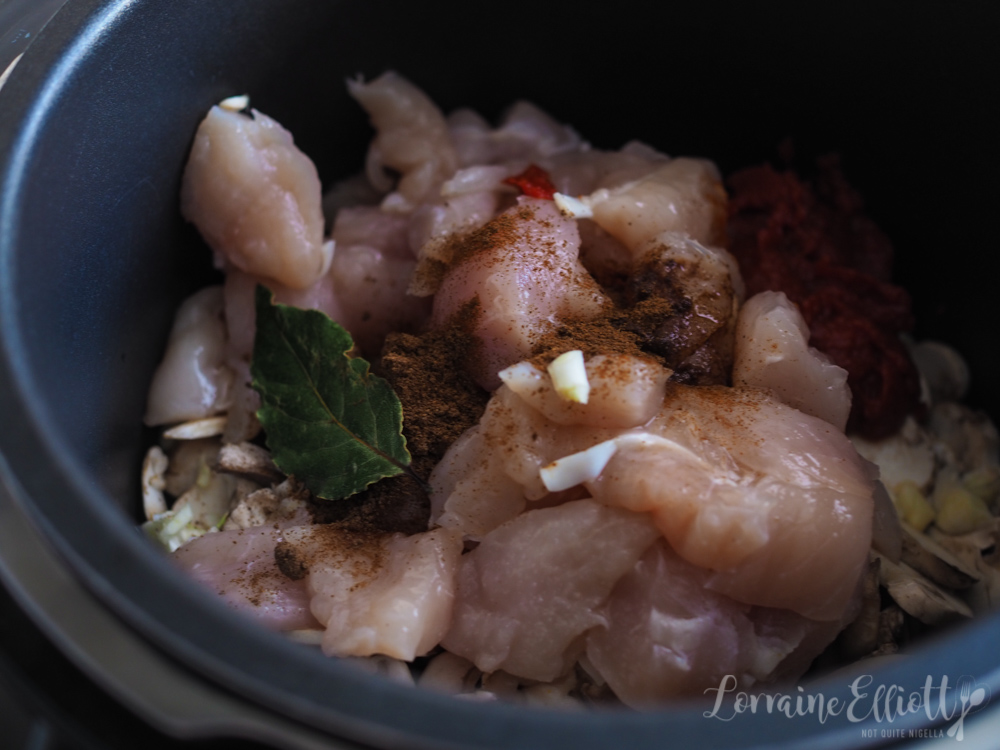 Instant Pot / Pressure Cooker directions: Set the pot to Sauté or Hot and add some oil to the pot and brown the chicken pieces. Remove from the pot and set aside. Then add the onion and garlic and sauté until soft. Then add the chicken stock and wine to deglaze the pan scraping any bits left on the bottom. Lastly add the chicken, mushrooms, tomato paste, Worcestershire sauce, paprika, mustard and bay leaf and place the lid on and set to high pressure for 10 minutes and release pressure naturally. It will seem like there isn't enough liquid but the mushrooms also release some liquid. Stir in the sour cream and season with salt and pepper. If you would like this thickened further, mix in the cornflour mixture to thicken up the sauce. Serve with pappardelle pasta. 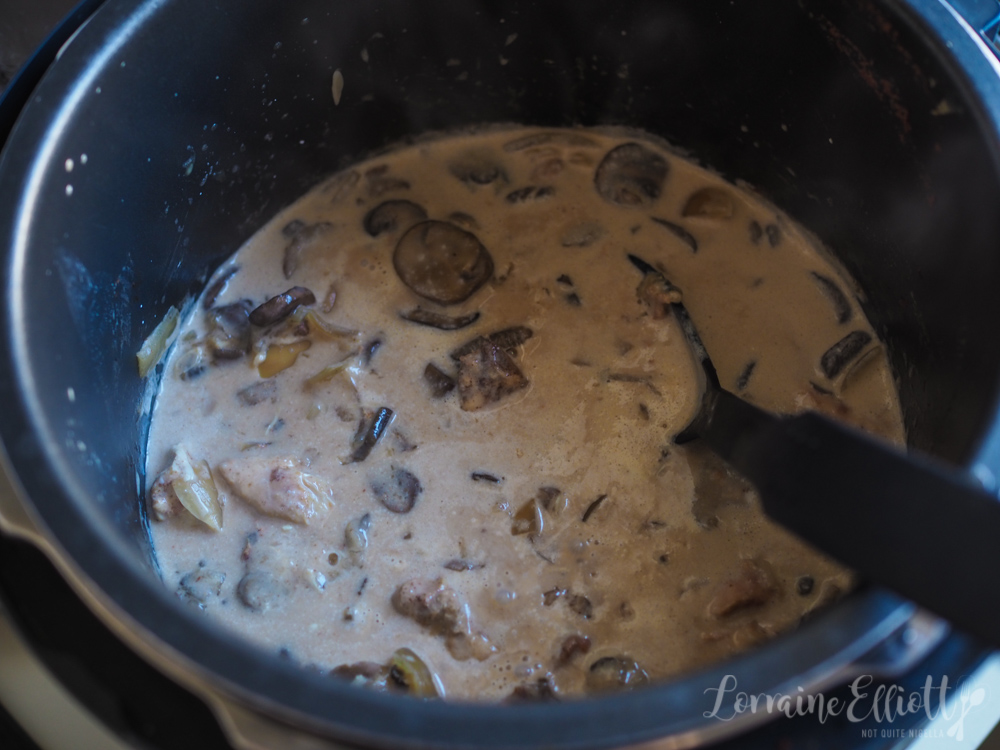 Stovetop directions: Heat a large pot on medium to high heat and add some oil. Brown the chicken pieces and then remove from the pot. Add the onion and garlic and sauté until soft, around 3 minutes. Deglaze the pot with the wine and then add the stock, chicken, mushrooms, tomato paste, Worcestershire sauce, paprika, mustard and bay leaf. Simmer for 15 minutes or until chicken is cooked through. Stir in the sour cream and season with salt and pepper. If you would like this thickened further, mix in the cornflour mixture to thicken up the sauce. Serve with pappardelle pasta. 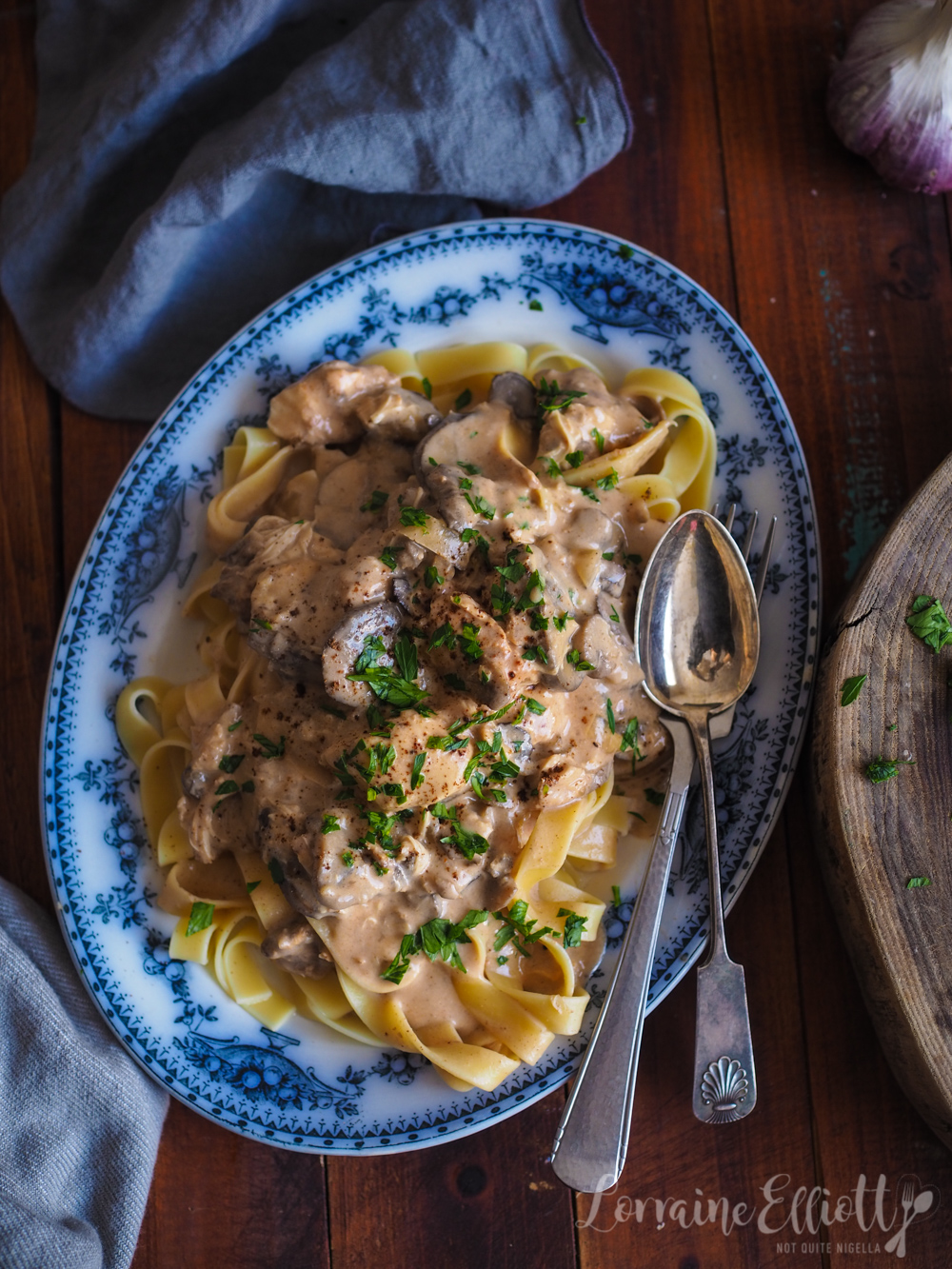