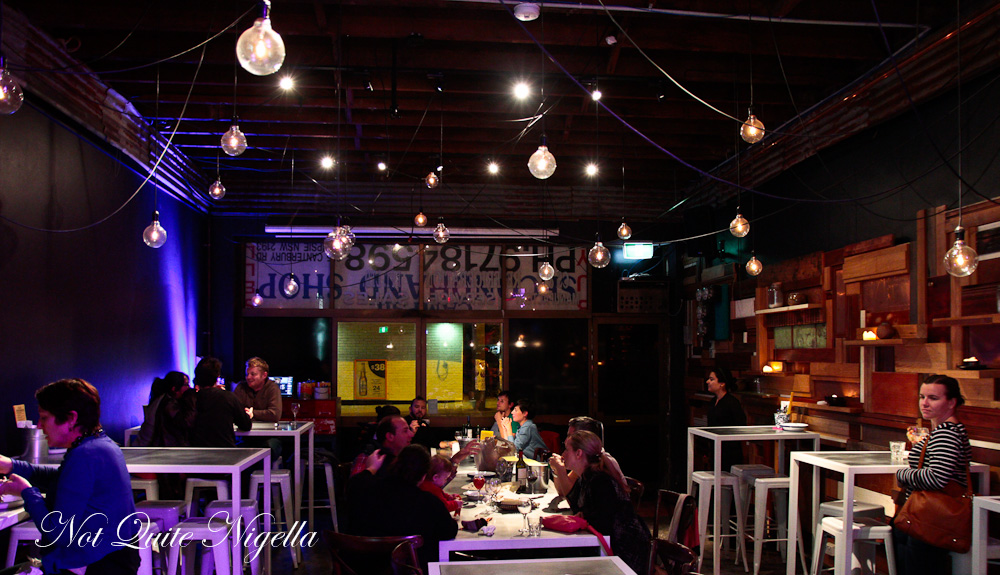 Comebacks. Everyone loves one. People wait with bated breath to see if someone will return and cheer them on when they do.

Rewind to 2012. La Lupita was a pop up restaurant that opened when it wanted to a few nights a week. It served what many said was the best Mexican food in Sydney and people loved the atmosphere and food. Created by Attila Yilmaz, a former police officer who was injured in the line of duty during one of Sydney's most notorious cases, it allowed him a second career as a chef. 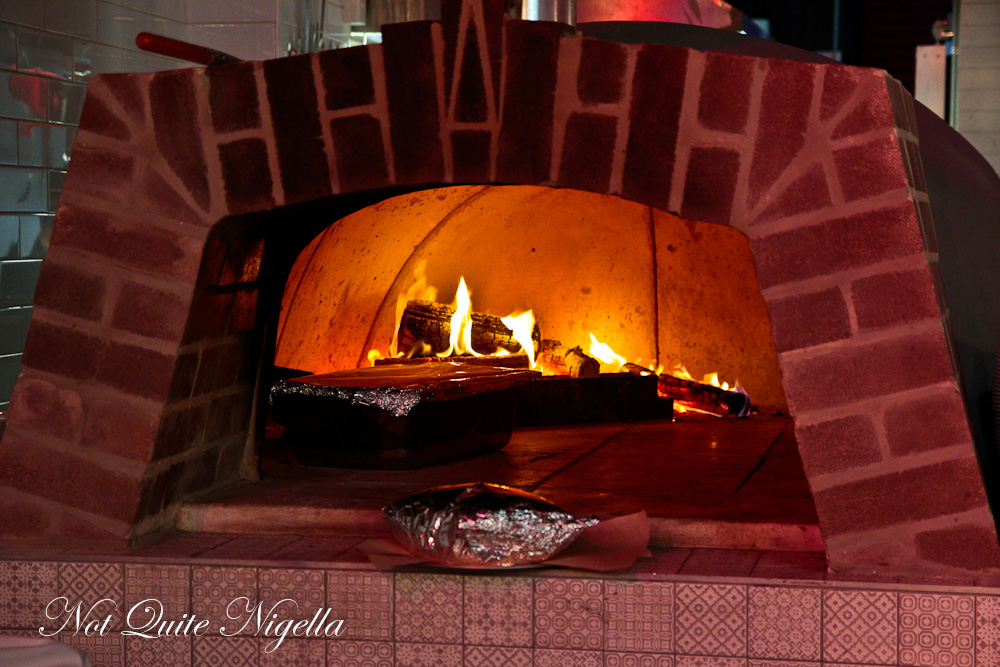 2013 brought with it seemingly good tidings. The La Lupita brand was purchased by a businessman David Wallace and his company that owns the Opera Kitchen and The Basement and Attila became the creative director. They closed the Canterbury location of La Lupita down and opened it up at The Basement in Circular Quay. Creative differences ensued and the relationship tore apart. Wallace now owns the La Lupita brand and Attila has now resurfaced with something different at his old Canterbury location. The Al Carbon food truck still operates for special events.

PAZAR Food Collective is his new incarnation at 325 Canterbury Road, Canterbury. The idea behind PAZAR, meaning bazaar or market is that eventually there will be items for sale, collaborations and a small bar in this space. Unlike La Lupita there is now a sign hanging outside (with social media buttons). Tonight Mr NQN and I are meeting Natalie and Rowan for dinner. 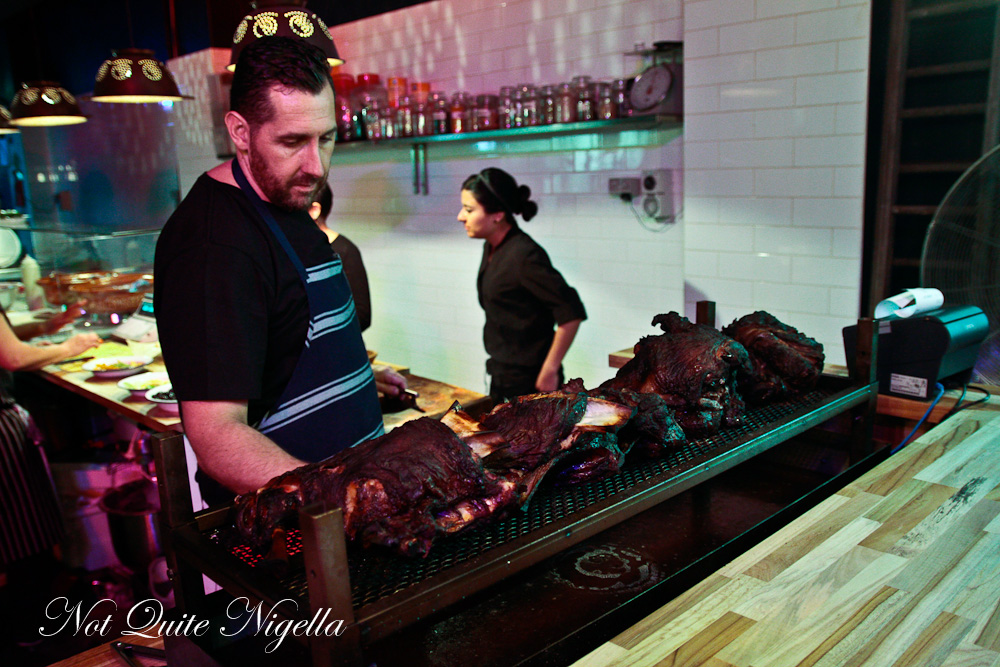 The atmosphere is warm and welcoming and instead of the copper hooded charcoal grill for meats, you notice an enormous purpose built brick oven large enough to fit several lambs. The enormous black and white image of the Day of the Virgin of Guadalupe festival still hangs from one wall. 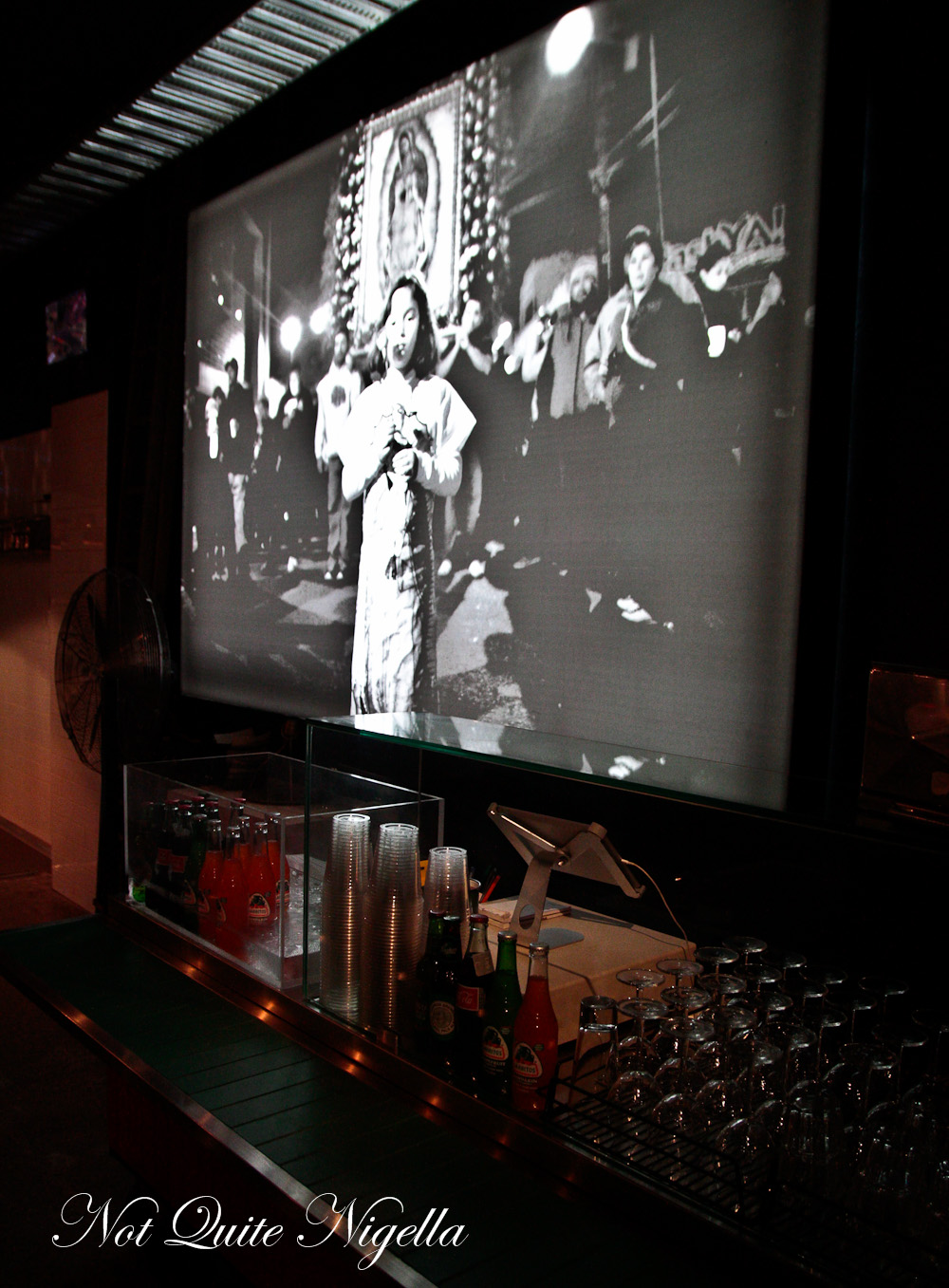 The food is no longer solely Mexican, it's mostly Turkish referencing Attila's half Turkish background. His Turkish father taught him how to cook Turkish classics like borek and pide. When he was still in the police force but unable to sleep, he would stay up all night baking borek. 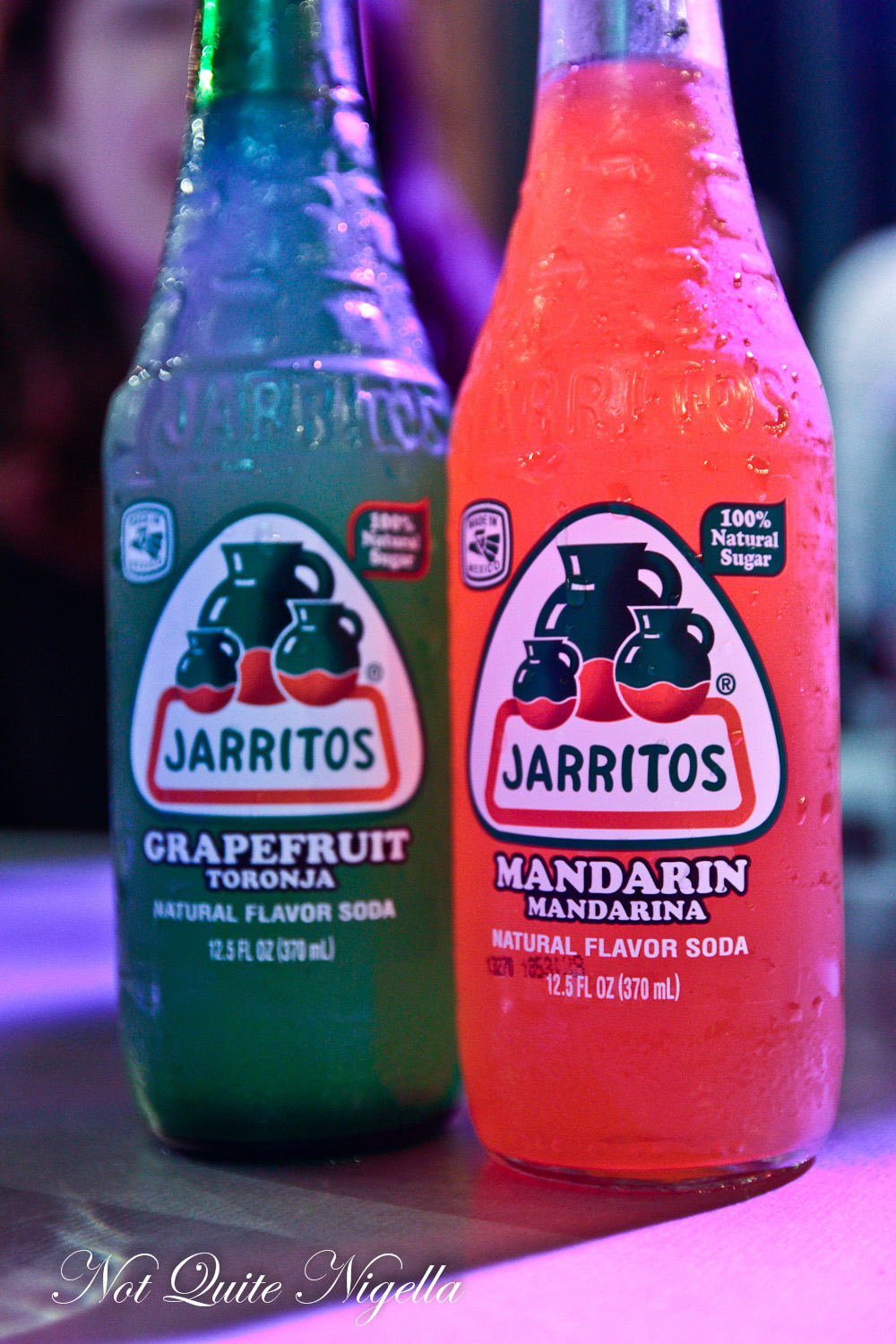 We order mandarin and grapefruit Jarritos or Mexican sodas and contemplate the yum cha style menu where you fill in the circles of what you would like and then hand it to a staff member. Diners help themselves to cutlery and plates on the table. Before long the food arrives. 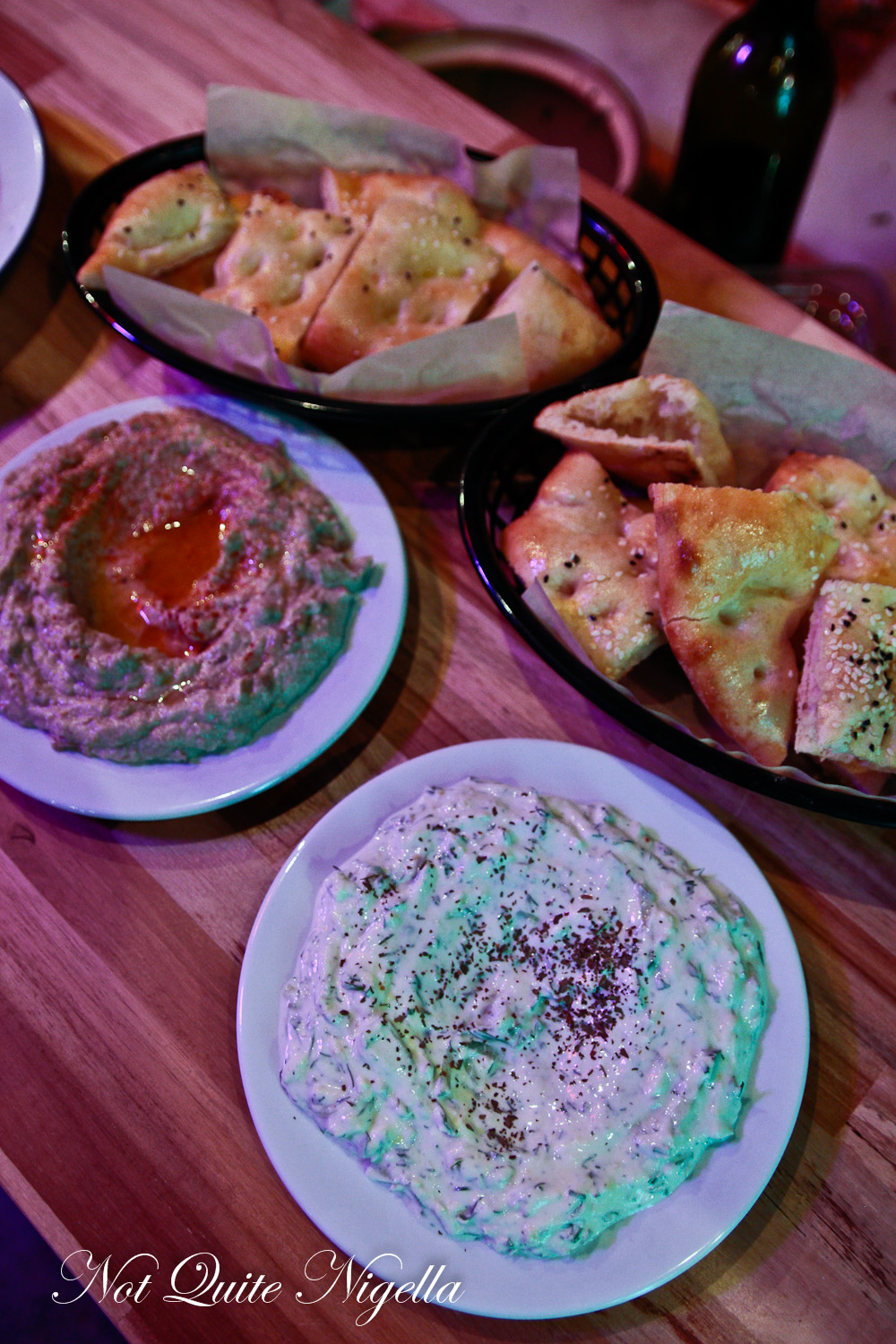 The tzatziki dip is perfect with the pide bread that we are served. It is creamy and given extra richness and saltiness from the feta. The smoked eggplant dip enriched with tahini and garlic also packs a punch of flavour and each dip comes with its own serve of freshly baked pide bread. 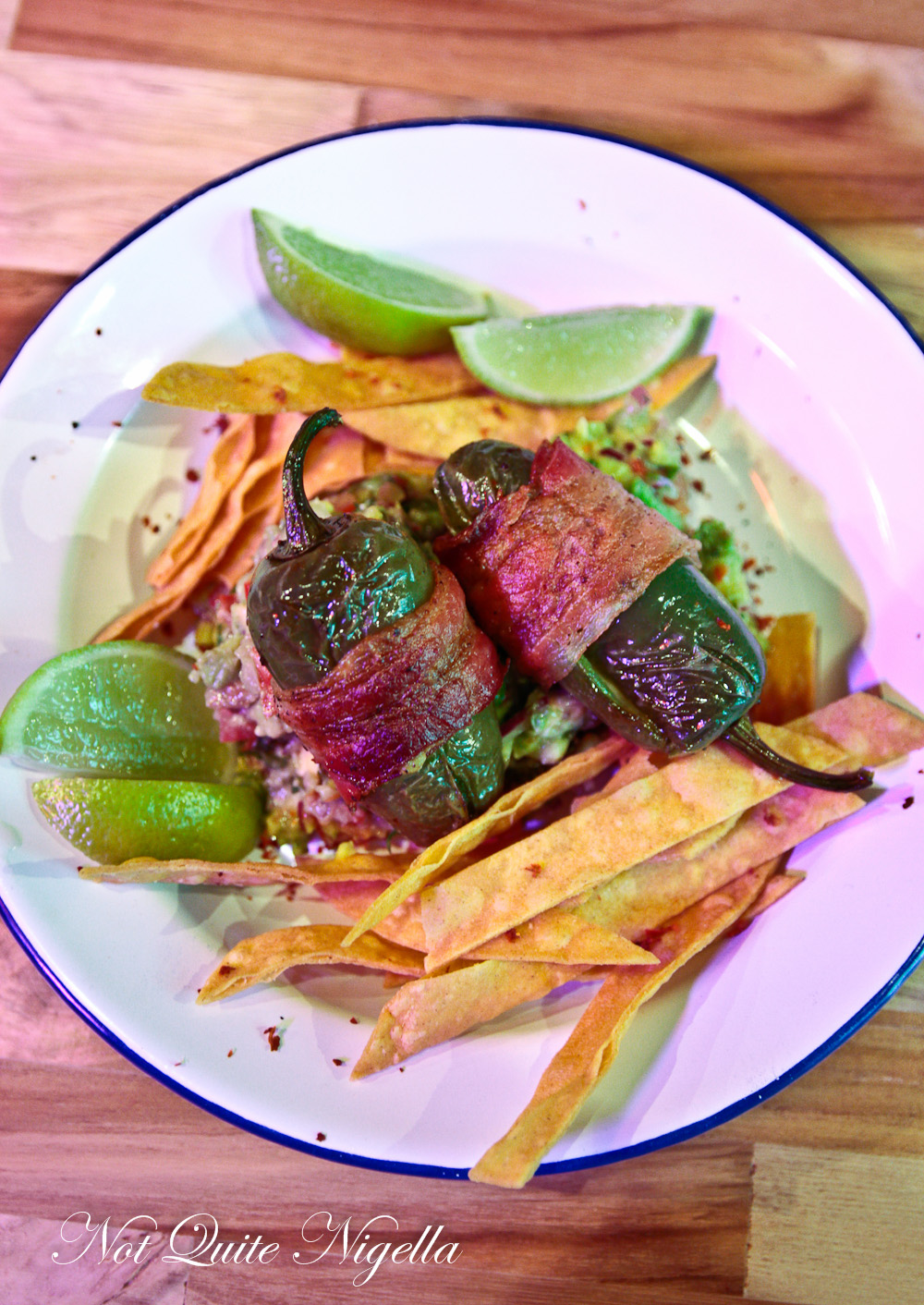 I sometimes forget how spicy I like things so when I rave about how much I love the sanchos, I forget the Rowan isn't one for chilli. This is too hot for him and has him reaching for the water (I feel terrible for not warning him!). The sanchos aka bacon wrapped cheese stuffed jalapenos are a shoutout to La Lupita and I'm glad to see these back as they were always my favourite. Now they are upsized and served on a bed of chunky guacamole and with deep fried tortilla strips. 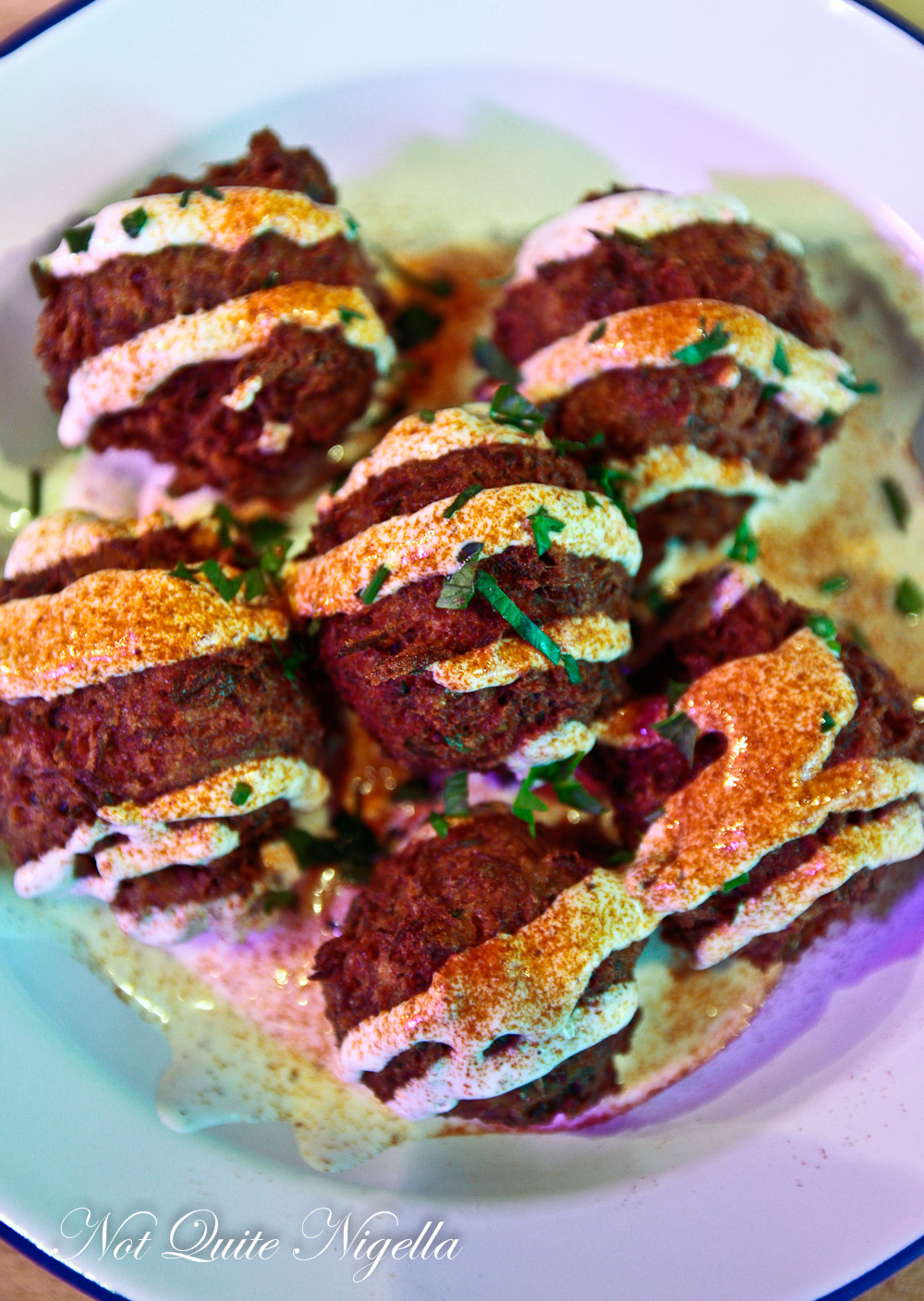 The fluffy, light zucchini herb balls are a hit with all of us. With a drizzle of spiced yogurt and herbs, I expected heavier orbs but these are wonderfully light. 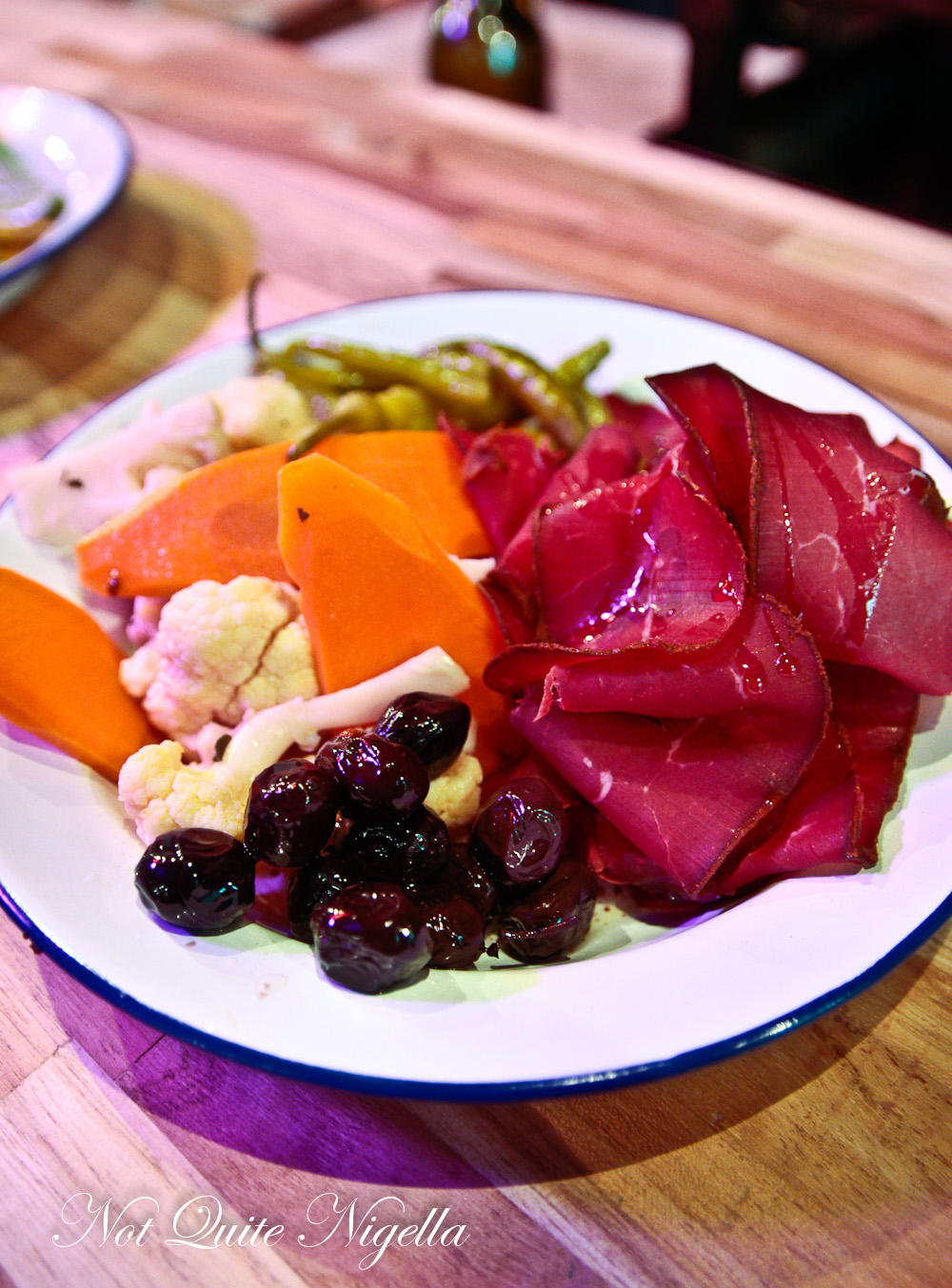 The pastirma or cured, air dried beef is made by a Turkish butcher. This is a cross cultural plate with the thin slices of beef served with Mexican pickles and delicious black Gemlick olives from the area of the same name in Northern Turkey. These olives are often eaten at breakfast. 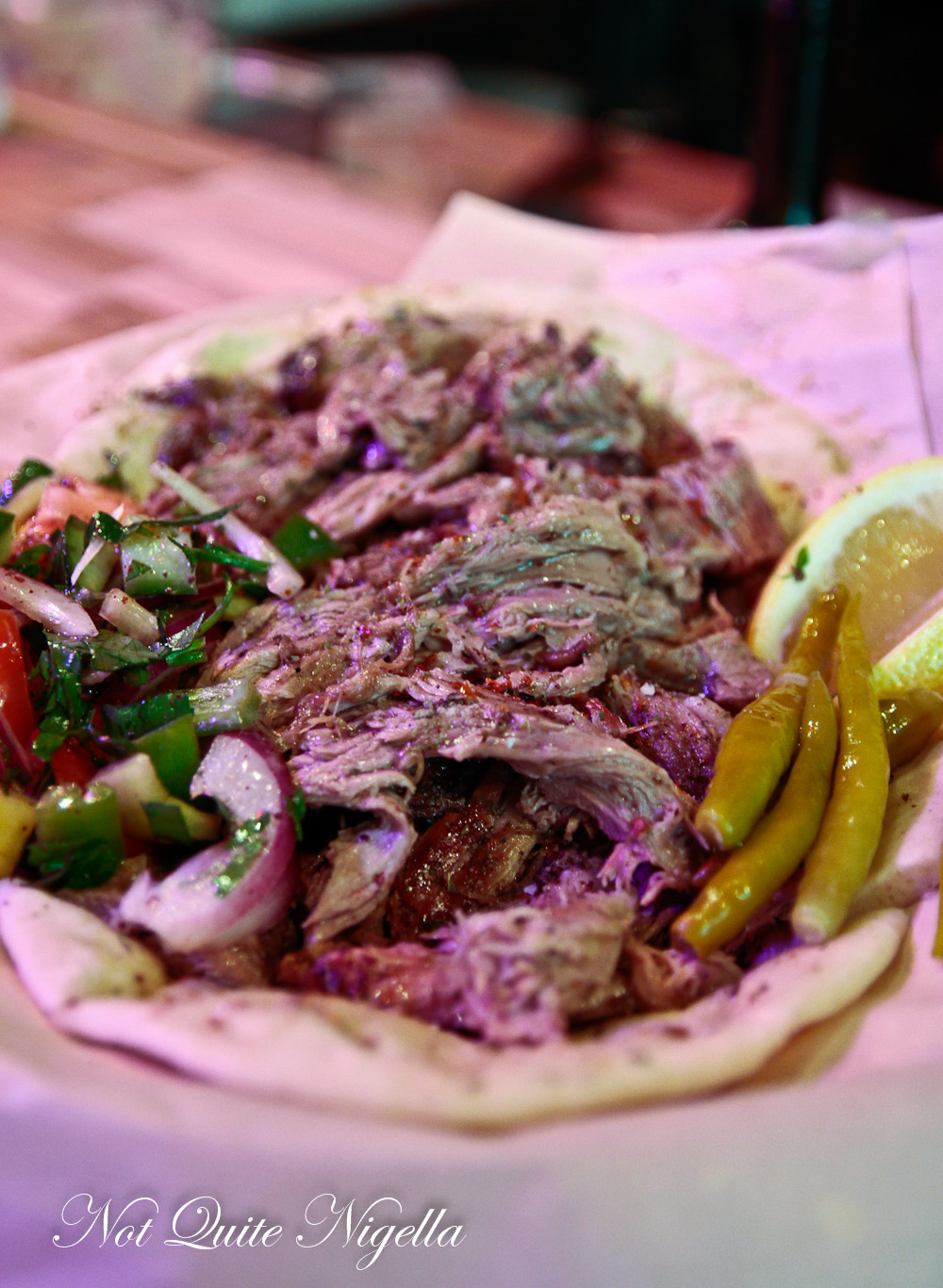 The lamb arrives and Attila explains the process of cooking the lamb. "I smoke the lamb first, with the lid off and then allow it to roast suspended over water to keep the meat moist and catch all the wonderful meat juices which I later lather the durum bread and lamb with when serving. The lid protects the lamb from the intense heat of the oven." It's often hard to get Mr NQN to eat lamb but he falls upon this like a long lost friend. The lamb is prepared in a special "lamb coffin" built just recently by Attila. The lamb forequarter is soft and served cut into bite sized pieces on a soft durum flatbread with a side salad and pickles. 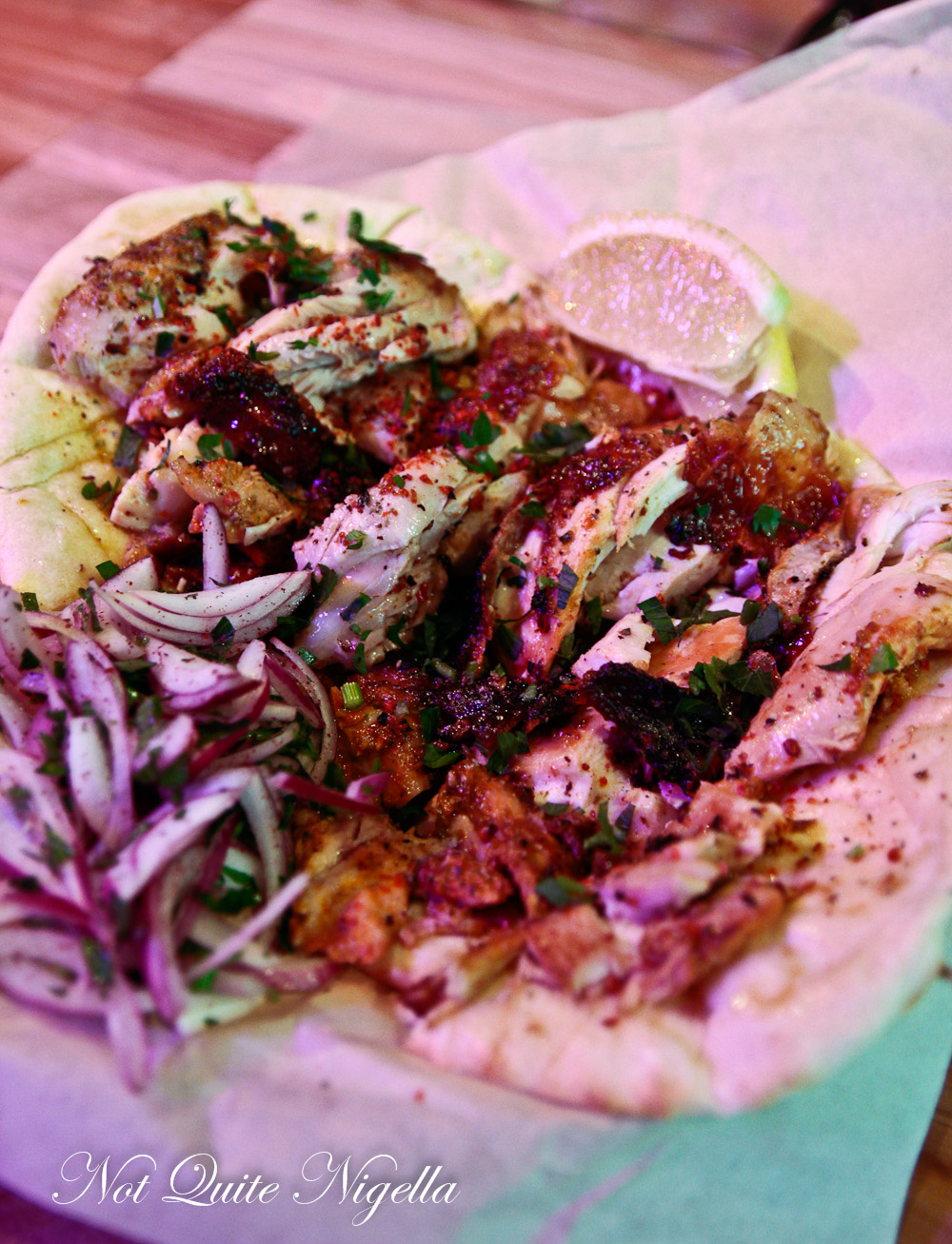 As much as I enjoyed the lamb, I really enjoyed the Harissa chicken with its mix of garlic, chilli and spices. It sings with flavour and the texture of the skin on chicken is moist and tender. It too comes sliced for easy eating with a side of red onion and a squeeze of lemon. 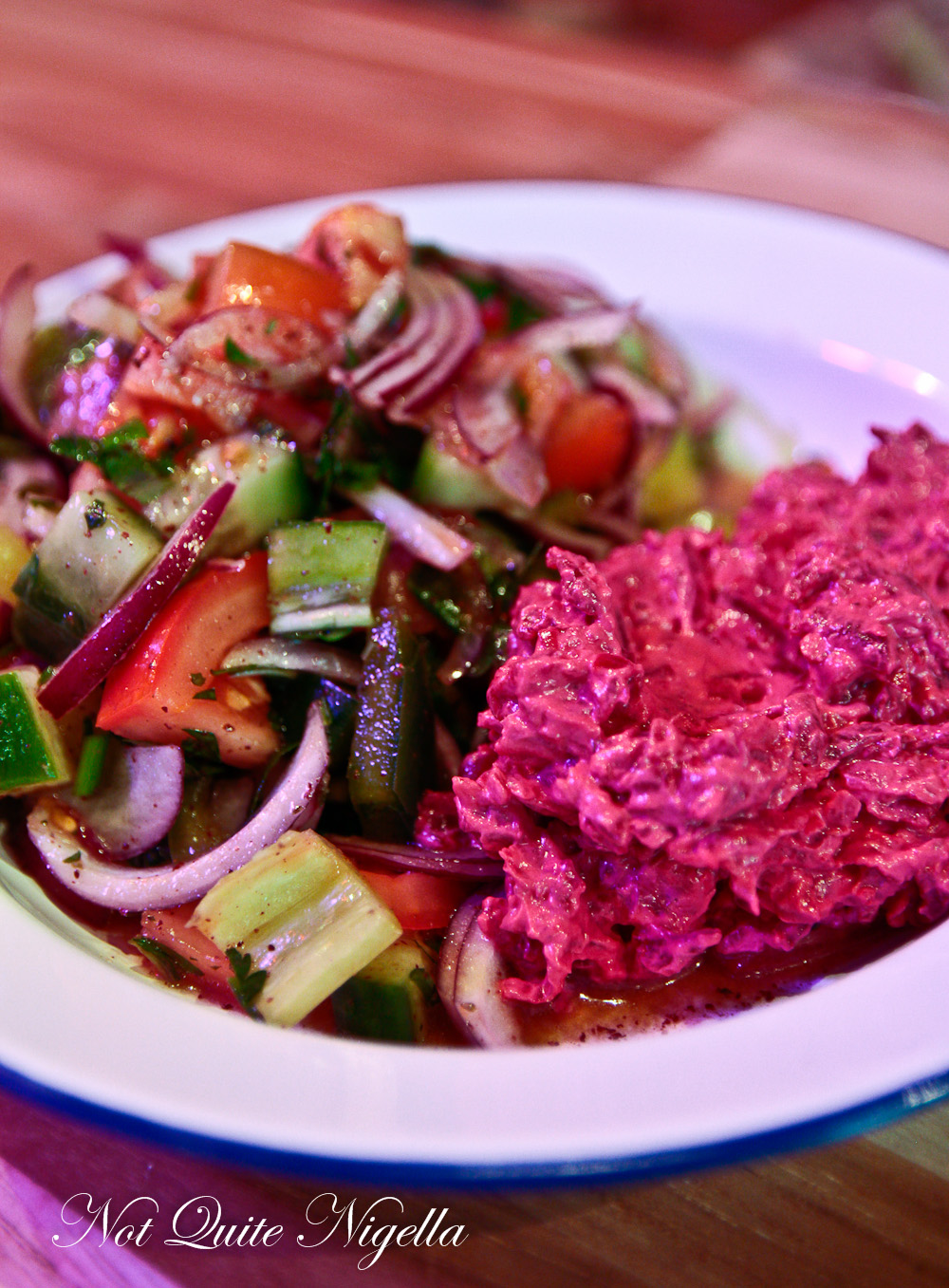 With the meat comes a crunchy Shepherd's salad, replete with fresh vegetables like cucumber, celery, tomato and onion and given additional flavour from pomegranate molasses. The roast beetroot dip with ribbons of beetroot is moreish and actually my favourite of the three dips. 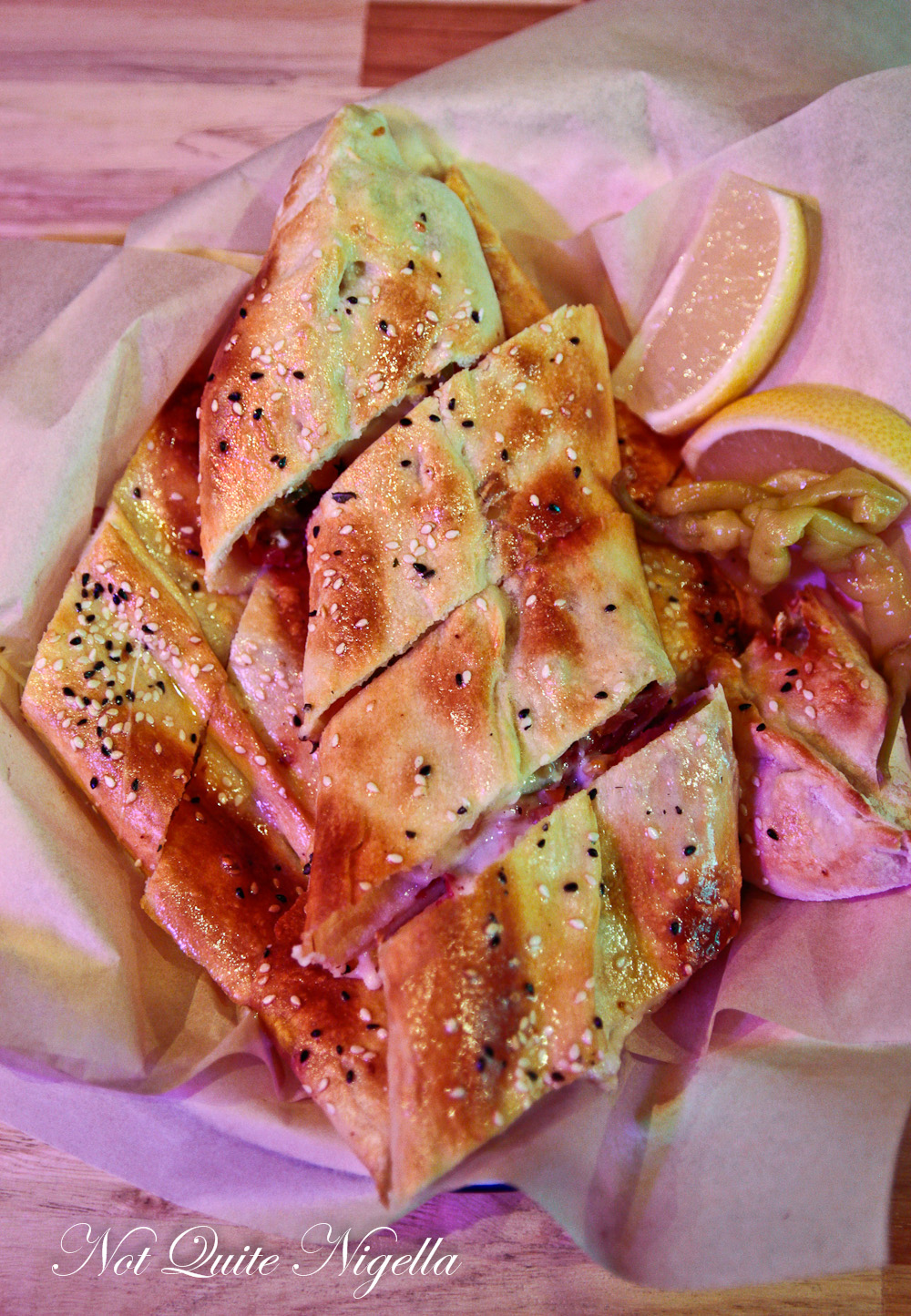 Okay, I think by now Natalie and Rowan thought "Oh my god, don't ever let this woman order again because she orders everything on the menu," and you know they'd be totally right. There are two pides on the menu although I didn't realise this. Out of the two this is my pick and the pastirma and kasar cheese hits the spot and has an enticing flavour and aroma. 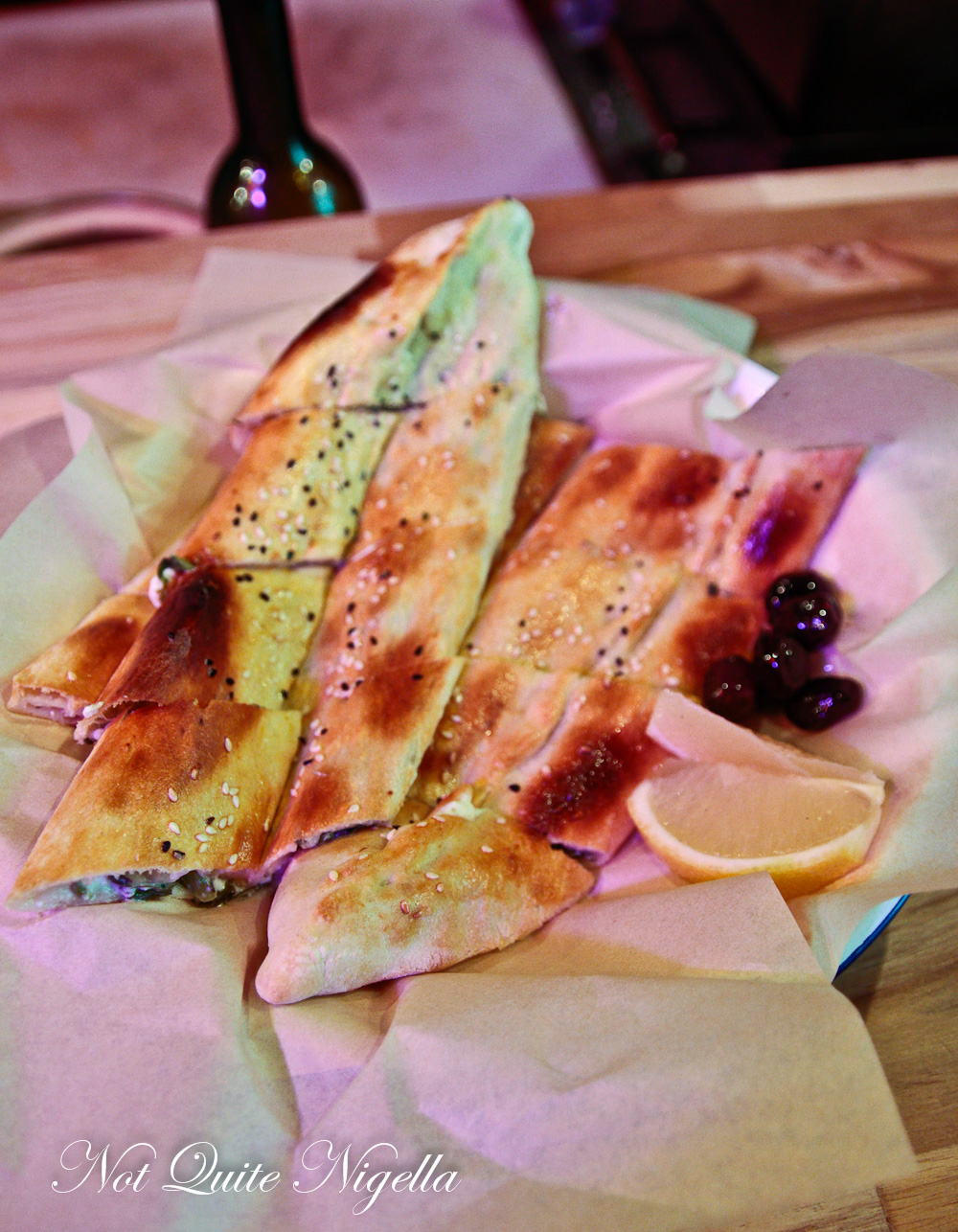 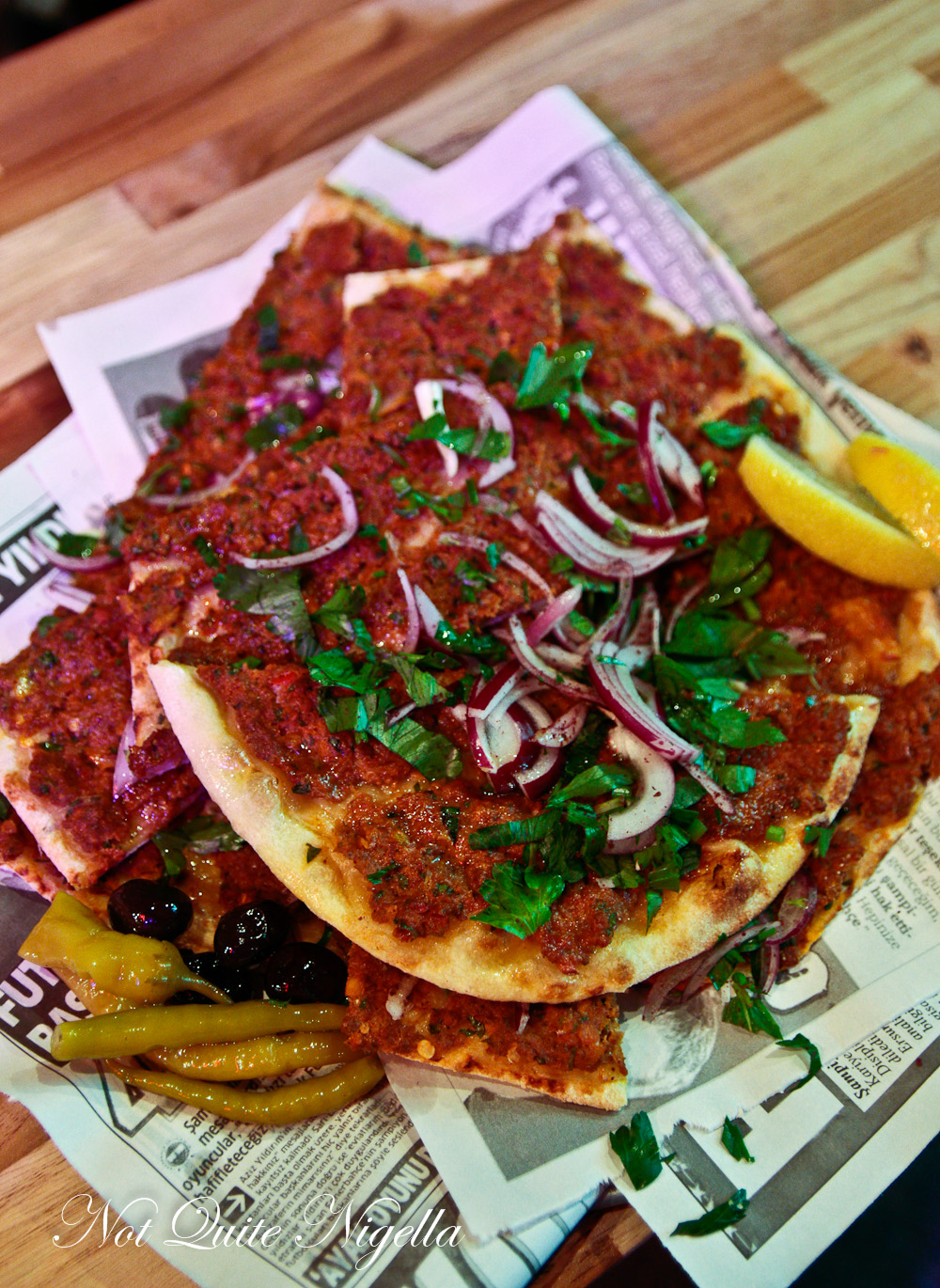 The Lahmacun or spiced beef Turkish flat pizza just needs a squeeze of lemon from the wedge provided and then a waiting mouth. The finely ground beef is seasoned and spiced just right. 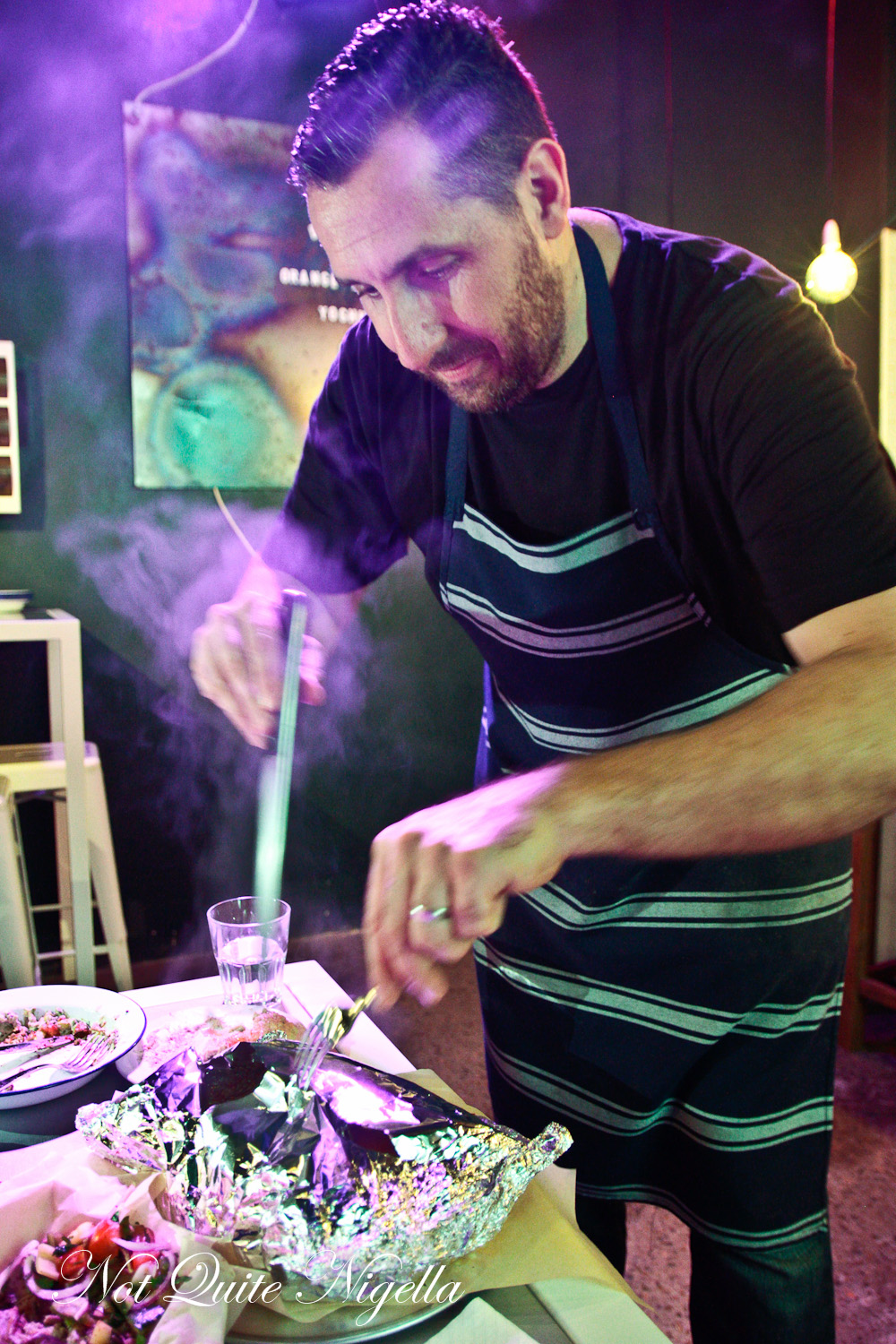 When I was watching them prepare the dishes I asked Attila what the daily special is. "I don't know," he said laughing. "I'll make something up," he answered. He comes out with a foil pillow and sets it down on the table and slices it open. "This was my after school snack," he says of the Kagitta Sucuk dish that is made up of a flavoursome mix of sliced sucuk sausage, tomatoes and vegetables, the flavour rich and the sauce thick enough to dunk more pide into. 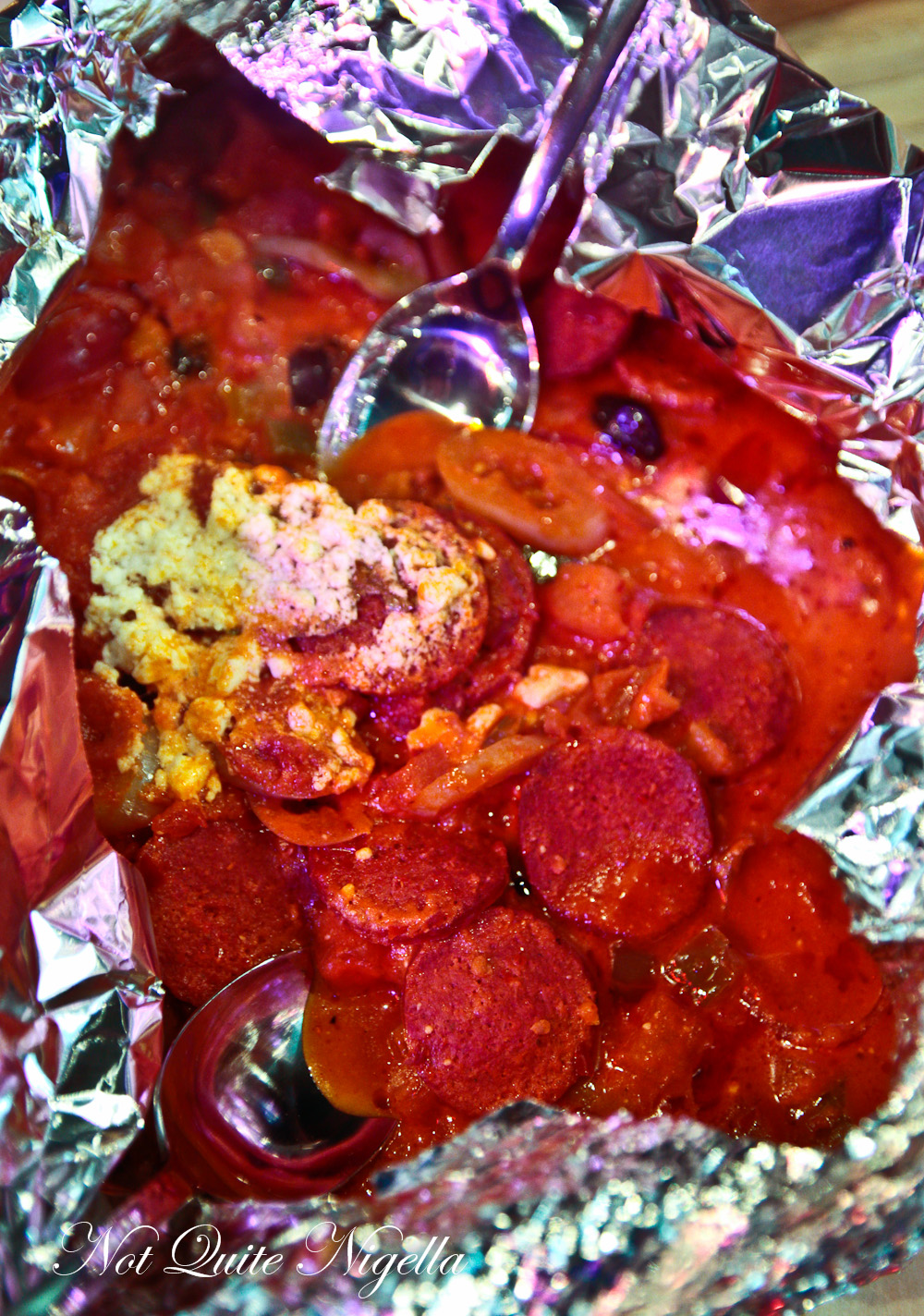 From time to time, he will also have items like Su Boregi with Turkish tea as a weekend breakfast special. It's a boiled pastry dish stuffed with cheese and spinach and then baked. It is served as wedges of moreish crispy pastry. We had tried this when we first visited PAZAR when it had just opened. 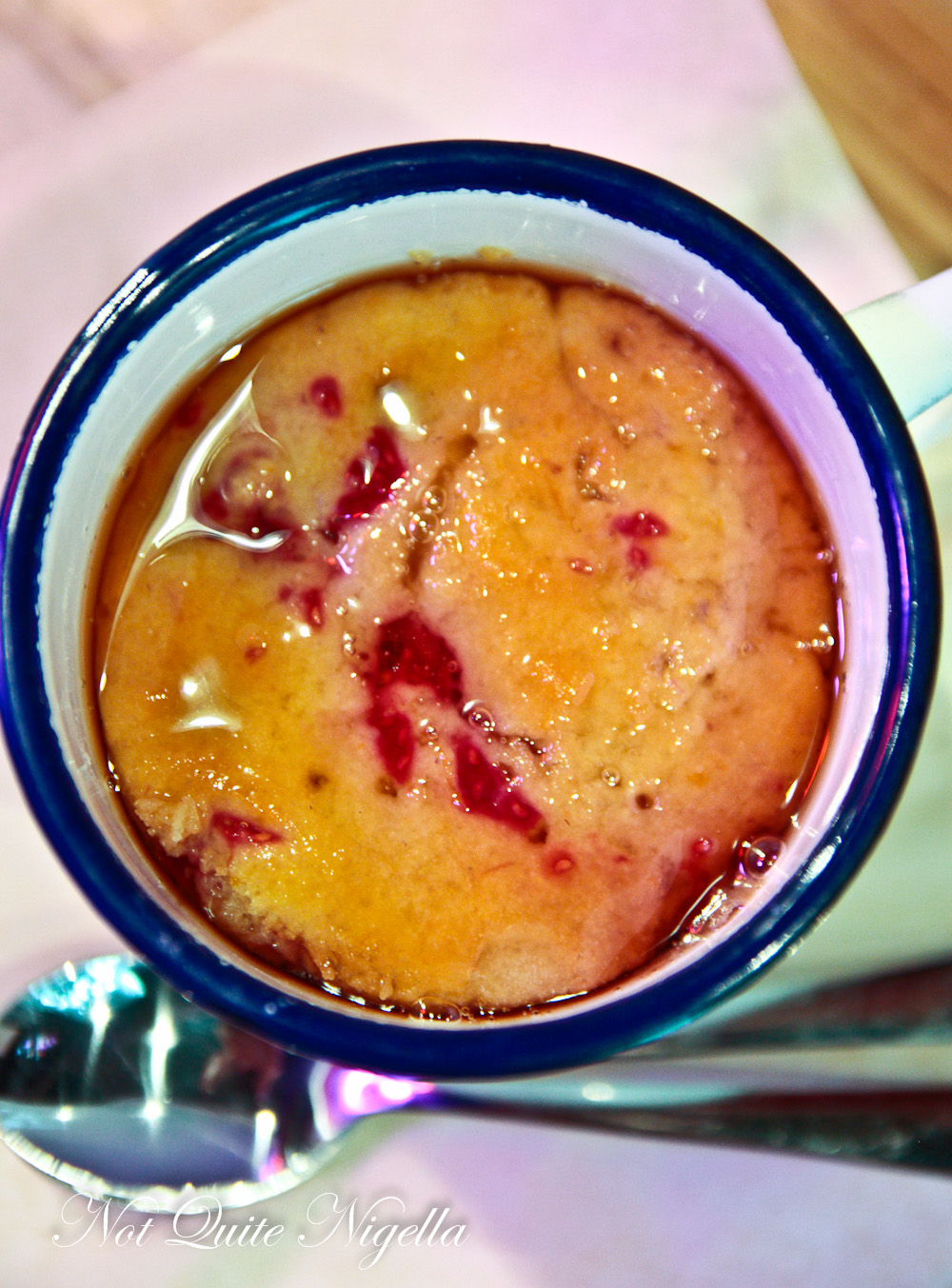 Dessert is on the specials board and it is a yogurt cake. It's not bad but I expected something fresher from the sound of it. It's fine but it's not quite up there with the savouries yet. I'm told that desserts are being reworked at the moment which if anything sounds like a good excuse to pop in again.

So tell me Dear Reader, what was your after school snack growing up? And when you eat out, do your friends and family leave the ordering up to you or do you each order individually? And what level of chilli heat can you take? 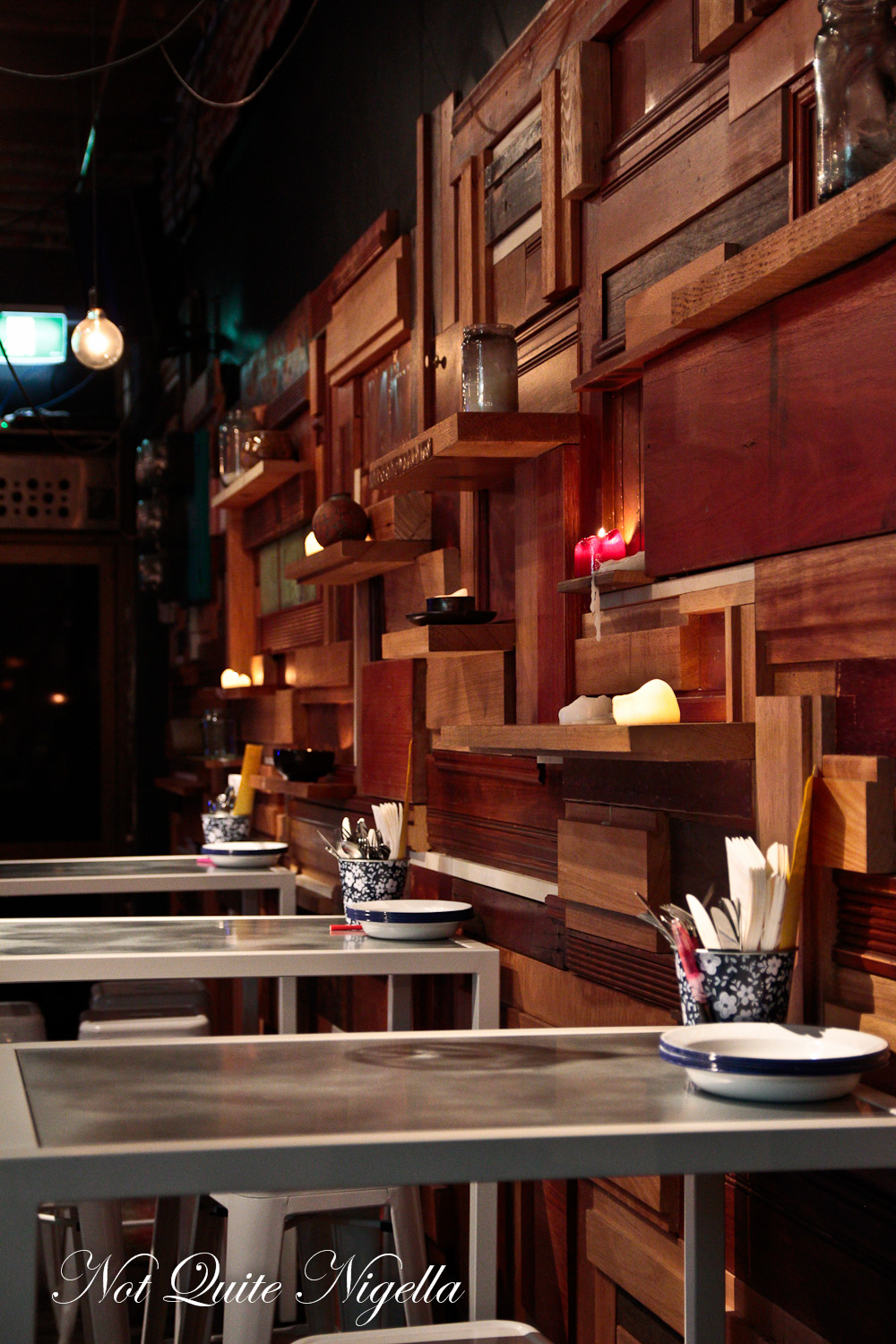